A May altar, A Love Story and Guerins of Convent Street 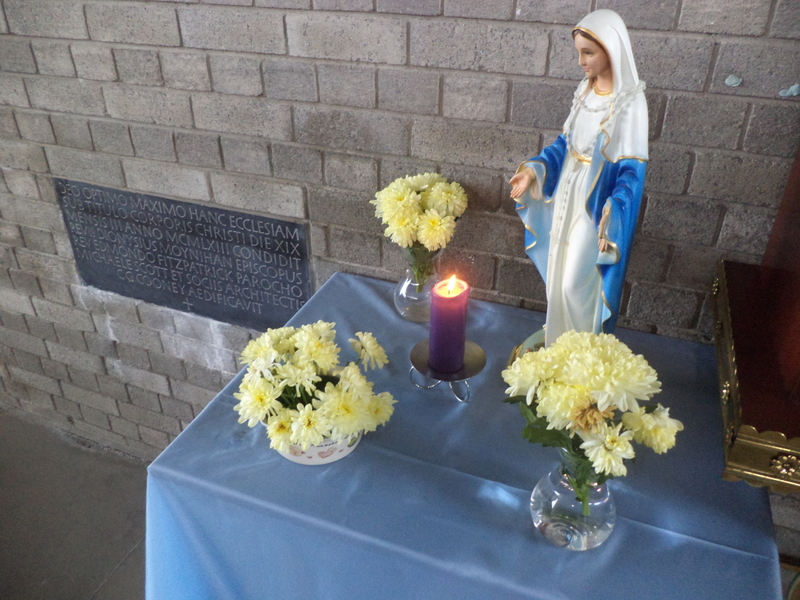 Bring flow’rs of the fairest,
Bring blossoms the rarest,
From garden and woodland
And hillside and vale;
Our full hearts are swelling,
Our glad voices telling
The praise of the loveliest
Rose of the vale.

On the trail of illustrious ancestors

Roz Scharf and her sister are coming from Australia to conduct some further research on their ancestors. One of their ancestor was deported for his Whiteboy activities.

quote from the historian Maurice Lenihan,  writing in 1867, may have been Edmond/Edward with his surname changed or misremembered?

The first dancer I ever met – he was the first in Munster, Leinster or Ulster,

an inventor, sir, of dancing himself – his name was “Edward Ellard;* he was a

Kerryman, sir. He danced Irish dancing with any man that ever laid foot to flure

[floor]. He was unequalled at the Moneen Jig. Oh! to see him dance it, you

would go any distance or spend any time; it was delightful, sir – aye, I say

delightful! The Moneen Jig, you know, or ought to know, is the best dance that

ever was known – a true, real, undoubted Irish dance; it would dazzle your eyes

to see it danced, sir. Well, Ellard was transported for life! He got at the head of

a great number of rebels, and he attacked the home of a gentleman where he

was teaching, and was informed against by one of his own party, and sent over

the seas for life! Oh, he was a great teacher – he taught myself …. He was a

native of Listowel, in the county of Kerry – a great man entirely.

Anyone know anything about this fellow?

Philomena and Peter …A Story of Enduring Love 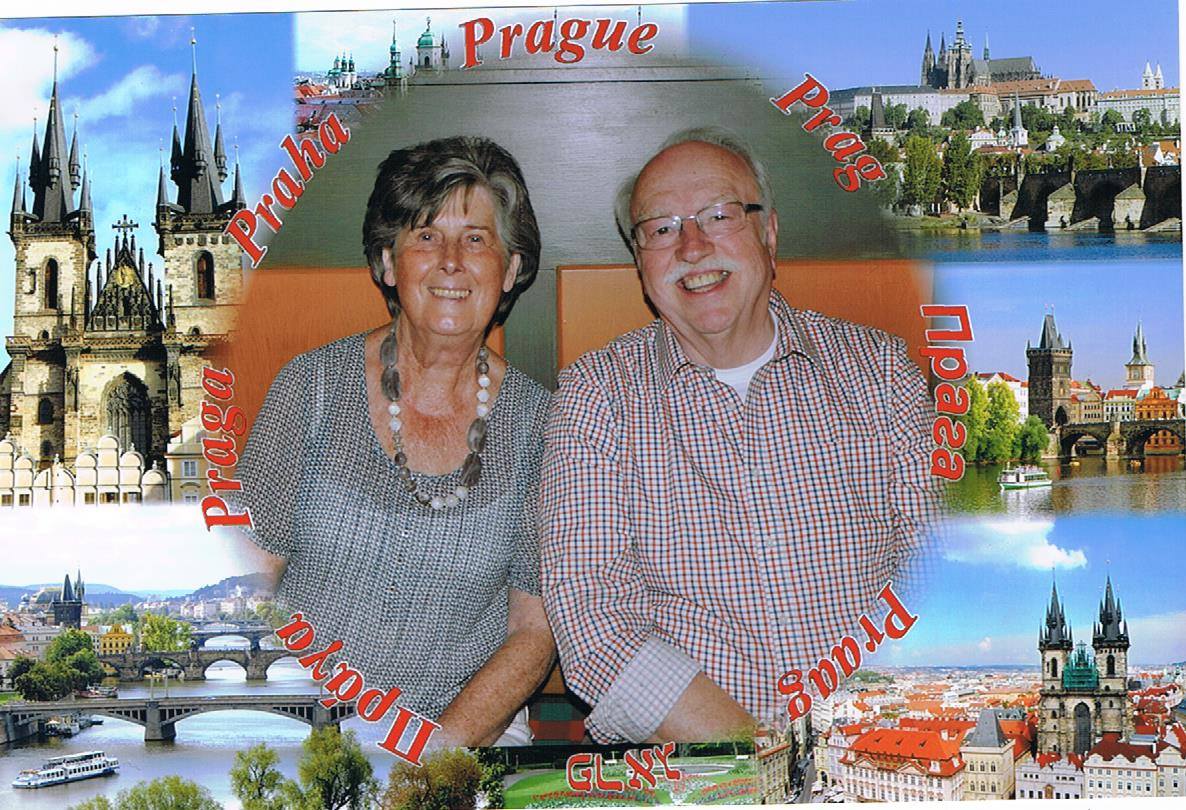 I asked Philomena to tell me her story and she did. I’m looking forward to meeting her when she comes for her Irish holiday later in the summer. She is bringing her photograph album.

I was born in Listowel, lived in O’Connell’s Avenue and I attended the convent primary school and then the  secondary school for two years. I went to Germany in August 1962 for a week’s training with a view to coming back to work in the Listowel factory.  Jowika was the first factory to come to Listowel. It was later Stag. I never intended to leave home for  good. I love the Irish culture, dancing, singing, just the Irish way of life which I still miss.

I met Peter in 1963, shortly before it was time for me to go home. (What will be, will be, as they say) I left Germany in November 1963 with the intention of going back again in January but unfortunately I got T.B.  I was in Edenburn hospital from January to September of 1964.

That summer Peter came to visit me. I got out of hospital for a few days so he stayed in Listowel. Afterwards when I went back to hospital he stayed in Tralee. Bunny Dalton knew a family in Tralee and they put him up. They were the Ryans of Stacks Villas. The first two days they drove him out to Edenburn, so that he would learn the way. Then they gave him a bike and he cycled out to visit me every day for two weeks.

I think the nuns felt sorry for him as they took him into the convent for his dinner every day. I don’t know they communicated as he had very little English but somehow it worked.

The nuns were very good. My favourite was Sr. Laurence. I kept in contact with her for years after leaving Edenburn. My first Christmas card every year came from Sr. Laurence. I visited her years later with my family. She was then in the Bon Secours Hospital in Cork as Edenburn was closed down.

Once a week a group of Irish singers and dancers used to come from Tralee to Edenburn to put on a show. There was a little hall on the hospital grounds. Those of us who were on the road to recovery were allowed to get dressed and go there. I used to look forward to  Thursday evenings. Many friends from Listowel and Tralee came to visit me while I was there. I was really surprised the day Bunny Dalton and John B. Keane came. When I was discharged John B. sent a car to bring me home. That’s what’s nice about living in a small town; everyone knows everyone and helps when help is needed. I’m afraid that has changed now. When I come home and take a walk up the Avenue it’s all closed doors., not like long ago when the doors were always open and the neighbours sat outside chatting and welcomed one home. I know life goes on and things change. Still it makes me sad.

I was sad to see that my old school was knocked down as I was hoping one day to go through my old classrooms. Also I thought it a pity that Clieveragh Bridge was knocked down but I suppose it couldn’t cope with the heavy traffic.

There is a song I love sung by Mike Galvin from Killorglin. It’s called Dublin in my Tears. This beautiful song describes how I feel when I come home. I call it Kerry in my Tears.

To finish my story, I was discharged fro Edenburn in September 1964. I went back to work in the factory in May 1965 and I wen t back to Germany in October’65. I got married to Peter in 1967. We have two children, three grandchildren and two great grandchildren, bless them. 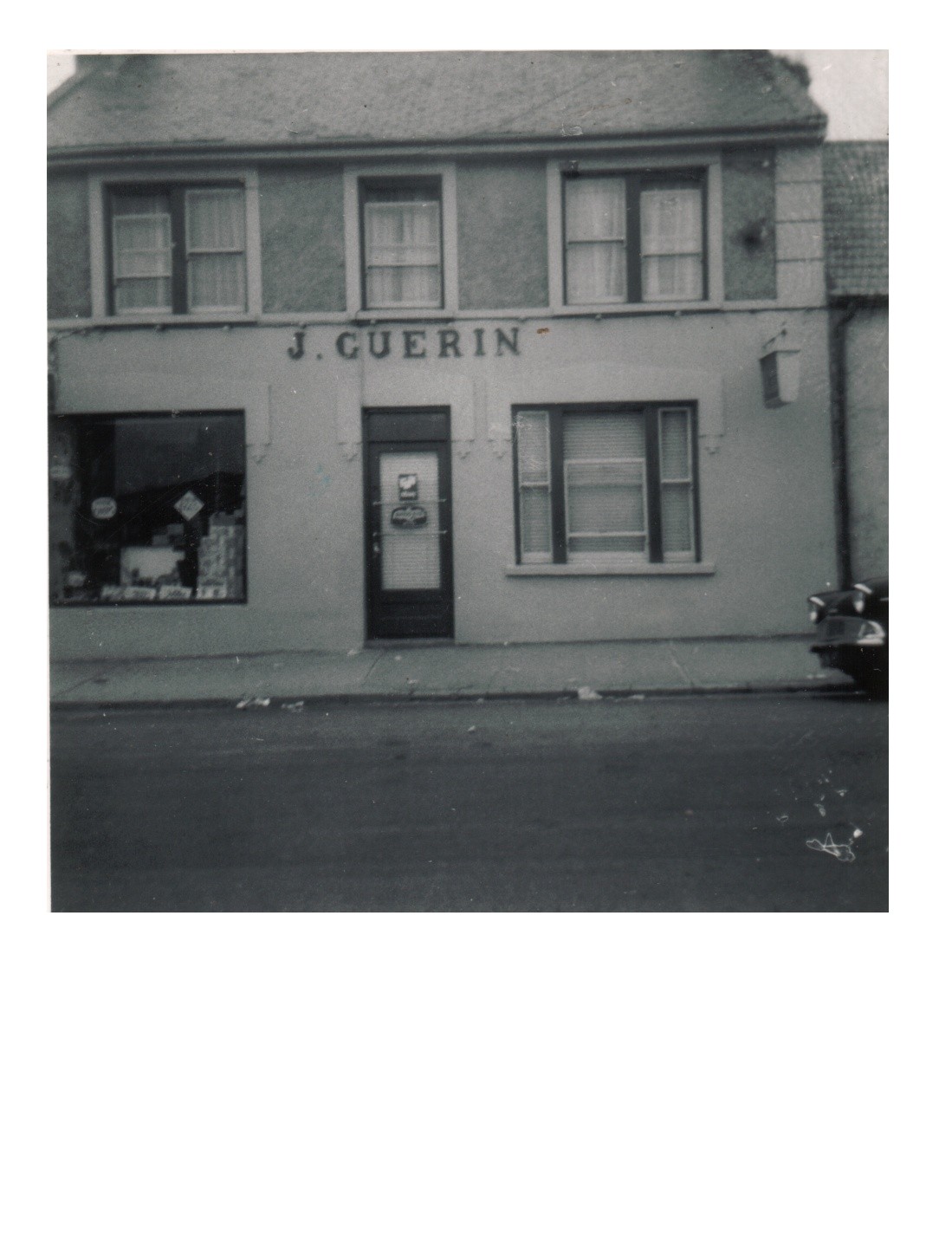 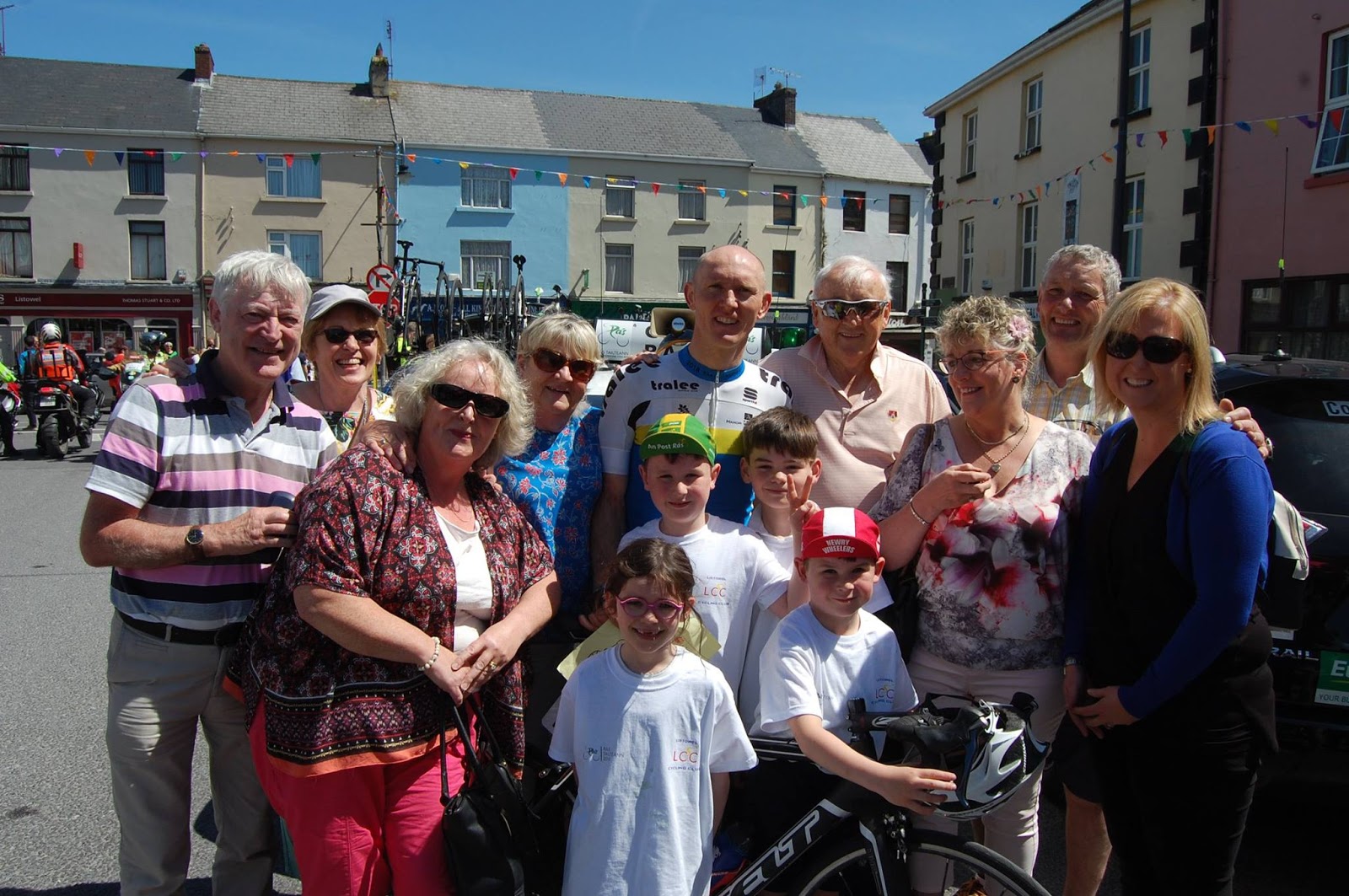 James Kenny took this photo in Market Street after Eugene Moriarty cycled into town at the end of Stage 3 of Rás Tailteann 2018. He was surrounded by family, neighbours and friends.

An Appeal for help

Friends Returning from Mass in the sunshine of may 2018 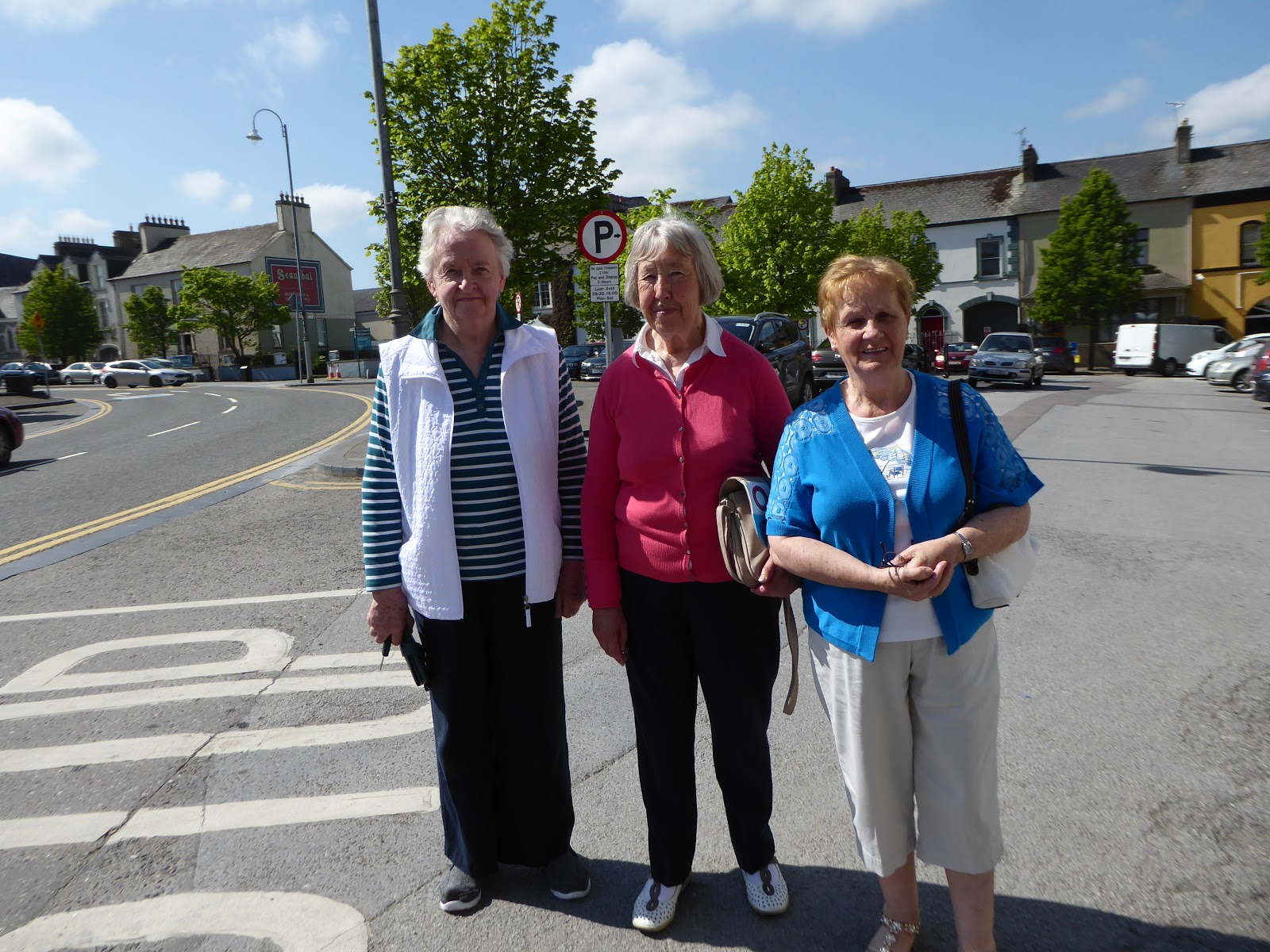 Church Street Auction, Cars from the Movies and Jackie Moore