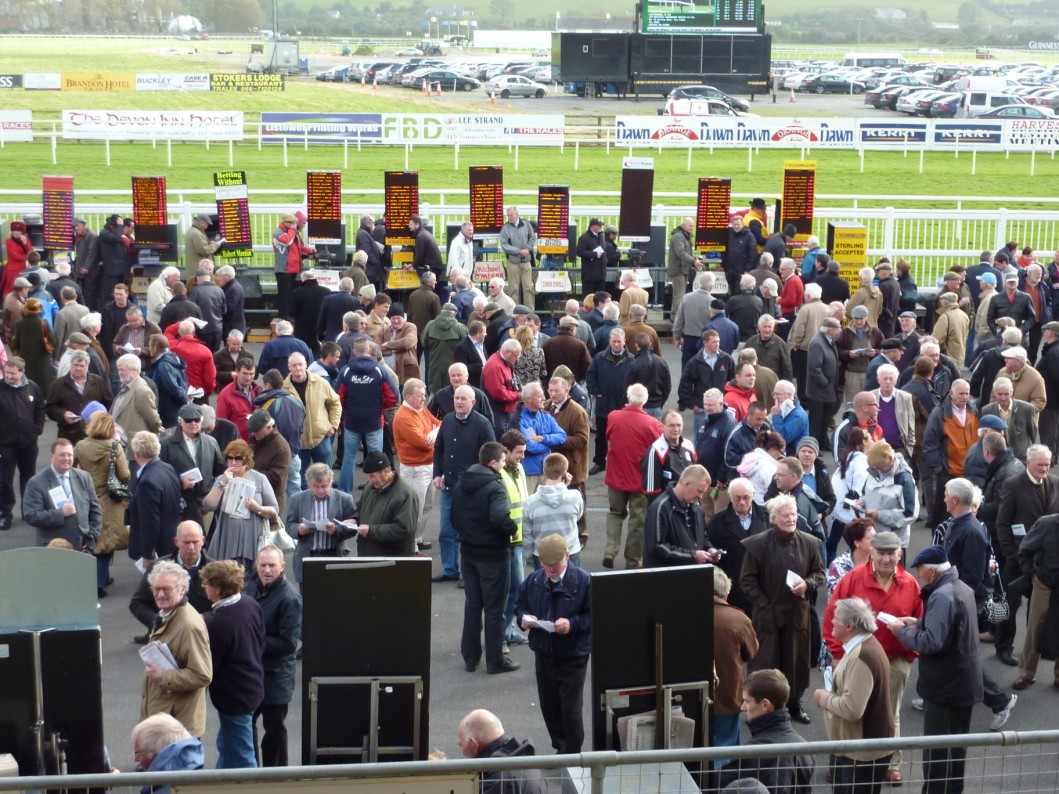 This is a photo of the bookies enclosure at this year’s festival. Notice all the electronic screens showing the odds. We, of a certain age, remember the old blackboards and chalk and, of course the tic-tac man. I’m sure there are readers out there with stories of these colourful characters. Nowadays betting information, including on track market moves is sold to the bookies by data collection agencies.

The two main off course attractions  during raceweek in Listowel were undoubtedly the Donkey Derby  and The All Ireland Wren Boys competition. The late John B. Keane described Listowel Donkey Derby as “A fantastic flight of asses down the historic Church St. course.”

The heyday of the donkey derby coincided with the emergence of one of the best known racing asses called Listowel Factory. This donkey was owned by Paddy Behan of Bunaghara and many of my age will remember his terrific duels with Finuge Lass.

The course for the donkey derby ran from the boy’s school to  Guiney’s in Lower Church St. now Mamma Mia. For health and safety reasons consideration was given at one stage to moving  the derby to Charles St. This would give a straighter course and safer viewing for spectators. At the meeting to discuss this proposal, Mr. Denis Guiney, publican, asked to address the meeting as he heard that they were considering moving the event. He threatened to withdraw his financial support of this event if this happened. The records show that this support amounted to the grand sum of one shilling and six pence.

Another donkey derby memory is that on one race night the well known commentator, Michael O’Hehir was standing on a tea chest giving a live commentary on the action. The same night the excitement of the crowd at the finishing line caused them to surge forward and topple him from his commentary box.

In a conversation later with Thomas Ashe who was on the original festival committee, he told me that he had been appointed to organize the start of the race. The official starter was none other than Prince Monolulu. The first night over 80 asses turned up at the start. Thomas was wondering whether to hold 10 heats of 8 or 8 heats of 10. When he got in touch by walkie talkie with John B., who was running the event, John B. jokingly suggested that they run all 80 off together.

The Wren Boy competition was started by the festival committee in the fifties. Dr. Johnnie Walsh was the first chairman and John B. was the first M.C. The first competitions were mainly made up of local groups, Killocrim, Ennismore, Dirrah East and Dirrah West. Two of the original “kings” were Jimmy Hennessey and Sonny Canavan.

One memory of mine is of working in a bar in London in the early 1960s and Dr. Johnny accompanied by Jimmy Hennessey in full Wren boy regalia entered the bar. The bar in question was The Devonshire Arms which was popular with film and TV celebrities. One of these, Sir Bruce Seton exclaimed when he saw the goat-skin clad Hennessey beating his bodhran “Good gracious, They’re coming in from the jungle.”

I don’t remember children in the river chanting “Throw me down something”, and I am sure that this tradition only started in the 1970’s.

Nowadays  no horses are stabled in town. There are close to 200 stables at the racecourse.

The following week it was back to school and life in Listowel resumed as normal. We were left only with memories, which happily we can still recall today.

John and Noreen O’Connell have contacted me to say how much they are enjoying having their memories of Listowel  Races  in the 50’s refreshed by our recent blog posts.

Noreen says “ John, being from Curraghatoosane was ensconced in the festival events. He remembers his father, Mick, telling him that the Kigero, a fiddle player from the border between Athea and Kerry ( he lived on the left hand side of the road, after the bridge at the hollow in the road) playing in a shed in the market. He charged 6 pence for a reel and set and hornpipe which the enthusiastic dancers danced to their hearts’ delight.  John’s father left his new cap, bought especially for the Races, behind one night, never again to be found!

Noreen and John are not 100% sure of the name. Has anyone else heard tell of this musician?

Update: Confirmation just in that he was called The Kigero. Anyone know why?