Who needs Las Vegas when we can see sunsets like this in Ballybunion? 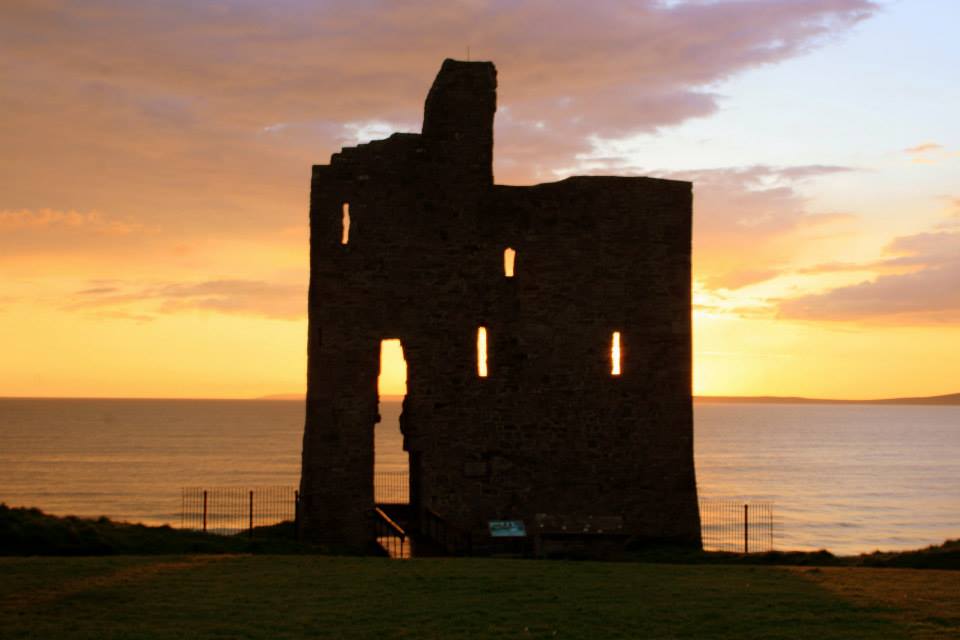 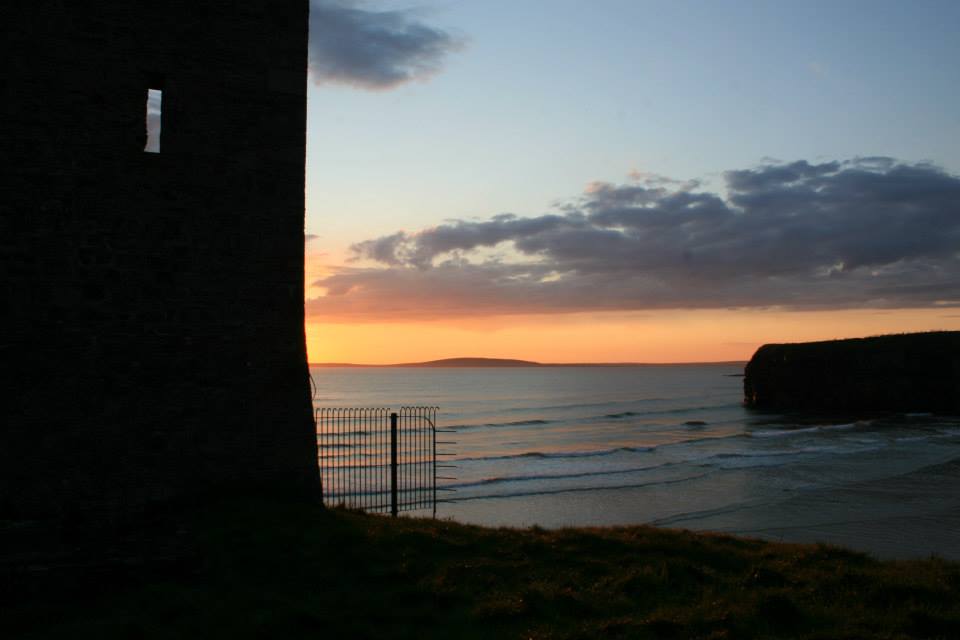 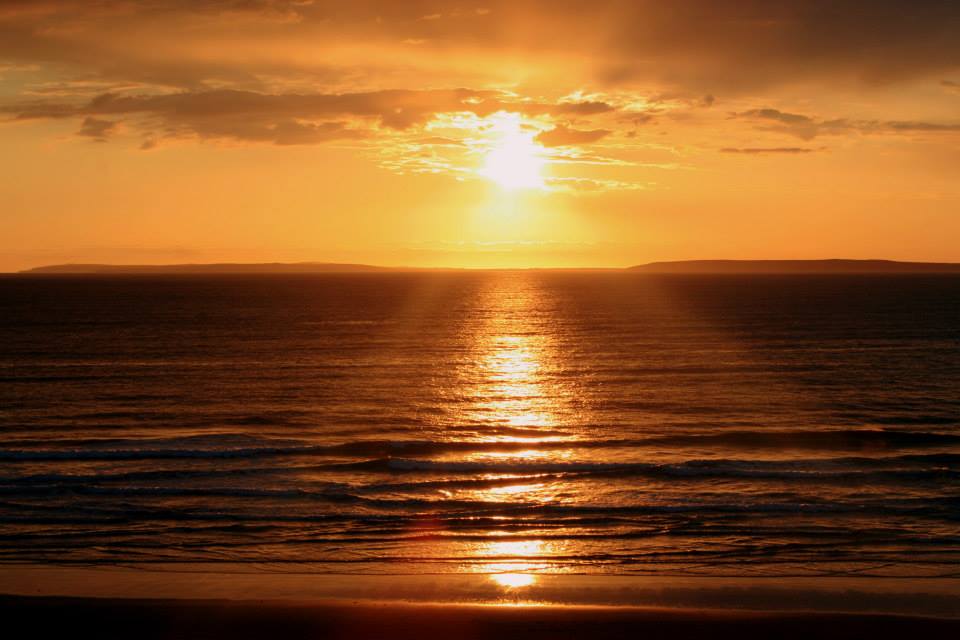 All photos taken by Ballybunion Sea Angling on Friday last, May 17 2013

Emigration is a topic that is never too far away from this blog. The Irish Times have a great blog called Generation Emigration. The following is a comment from Mari Fleming.

“Successful migrants integrate with the society in which they find themselves; they do not, these days, cluster together in ghettos maintaining a semblance of the culture of their original homeland. Witness the unsuccessful ‘multiculturalism’ in the UK, where communities of South Asians apply the cultural norms of India, Bangladesh or Pakistan, and never assimilate to the host culture. 7/7 was the result.

Irish culture is not different enough from UK, Continental European, North American, Australian or New Zealand culture for any Irish person to have any difficulty assimilating – seeking out other members of the so-called ‘diaspora’ in these places is really not necessary or helpful at all. In fact, in the US, I went out of my way to avoid the descendants of previous Irish diasporas, who had stuck together in Irish ghettos and transmitted a romanticised, nationalistic image of Ireland through the generations. One of these ‘Irish’ once commented to me that I was ‘not really Irish’ as I didn’t speak with a sing-song accent and I worked in IT!

Moving to another country for work in this globalised, connected world should be looked at as an opportunity for personal and professional development – not as an unfortunate wrench from an ideal way of life in the homeland – as the Irish Times seems to insist it is. The myth of the Irish Diaspora is about as relevant these days as the myth of the wandering Tribes of Israel.”

For all of those people who love cycling, here is a great post from an Australian cycling blog.

The Beauty of cycling

Every so often, I’ll ride a recreational group ride. I love the camaraderie of cyclists, the talk, the last minute pumps of air, the clicking in, and the easy drifting out as a peloton. “I miss riding in a group,” I’ll think to myself.

The magic ends by mile 10. The group will surge, gap, and separate, only to regroup at every stop sign. I’ll hear fifteen repeated screams of “HOLE!” for every minor road imperfection. And then no mention of the actual hole. Some guy in front will set a PB for his 30 second pull. Wheels overlap, brakes are tapped, and some guy in the back will go across the yellow line and speed past the peloton for no apparent reason. A breakaway?!

I curse under my breath, remembering why I always ride with only a few friends. Doesn’t anyone else realize how dangerous this ride is? How bad it is for our reputation on the road? There are clear rules of ride etiquette, safety, and common sense. Does anyone here know the rules? Who is in charge?

But no one is in charge, and the chaotic group has no idea of how to ride together. As a bike lawyer, I get the complaints from irritated drivers, concerned police, controversy-seeking journalists, and injured cyclists. It needs to get better, but the obstacles are real:

First, everyone is an expert these days. The internet and a power meter do not replace 50,000 miles of experience, but try telling that to a fit forty year-old, new to cycling, on a $5000 bike. Or, god forbid, a triathlete. No one wants to be told what to do.

Second, the more experienced riders just want to drop the others and not be bothered. It is all about the workout, the ego boost, or riding with a subset of friends. But a group ride is neither a race nor cycling Darwinism. As riders get better, they seek to distinguish themselves by riding faster on more trendy bikes; but as riders get better they need to realize two things: 1) there is always someone faster, and 2) they have obligations as leaders. Cycling is not a never ending ladder, each step aspiring upwards, casting aspersions down. It is a club, and we should want to expand and improve our membership.

Third, different rides are advertised by average speed, but speed is only one part of the equation. This approach makes speed the sole metric for judging a cyclist, and creates the false impression that a fit rider is a good one. Almost anyone can be somewhat fast on a bike, but few learn to be elegant, graceful cyclists.

Fourth, riding a bike well requires technique training. Good swimmers, for example, constantly work on form and drills; so should cyclists. Anyone remember the C.O.N.I. Manual or Eddie Borysewich’s book? They are out-of-print, but their traditional approach to bike technique should not be lost. More emphasis was given on fluid pedaling and bike handling.

Before the internet, before custom bikes, and before Lance, it was done better. Learning to ride was an apprenticeship. The goal was to become a member of the peloton, not merely a guy who is sort of fast on a bike. Membership was the point, not to be the local Cat. 5 champ. You were invited to go on group ride if you showed a interest and a willingness to learn. You were uninvited if you did not. You learned the skills from directly from the leader, who took an interest in riding next to you on your first rides (and not next to his friends, like better riders do today). Here is some of what you learned:

– To ride for months each year in the small ring.

– To take your cycling shorts off immediately after a ride.

– To start with a humble bike, probably used.

– To pull without surging.

– To run rotating pace line drills and flick others through.

– To form an echelon.

– To ride through the top of a climb.

– To hold your line in a corner.

– To stand up smoothly and not throw your bike back.

– To give the person ahead of you on a climb a little more room to stand up.

– To respect the yellow line rule.

– To point out significant road problems.

– To brake less, especially in a pace line.

– To follow the wheel in front and not overlap.

The ride leader and his lieutenants were serious about their roles, because the safety of the group depended on you, the weakest link. If you did not follow the rules, you were chastised. Harshly. If you did, you became a member of something spectacular. The Peloton.

The sad reality of summer 2013 so far 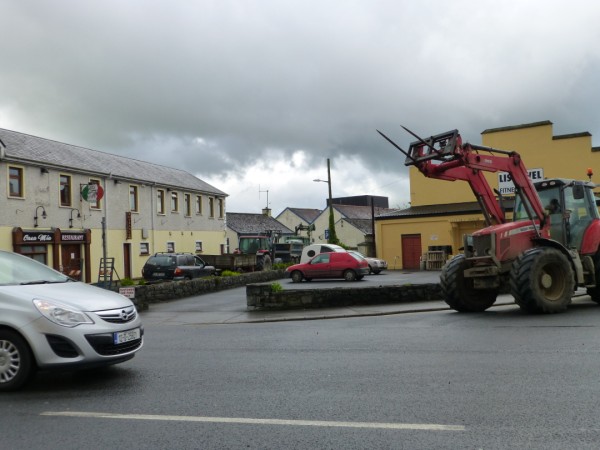 Farmers queue for hay at the creamery. The line of farmers waiting to buy hay from France stretched all the way down The avenue on one day last week. 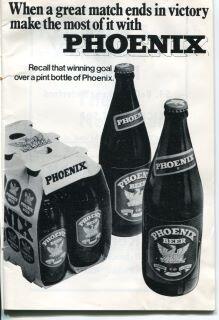 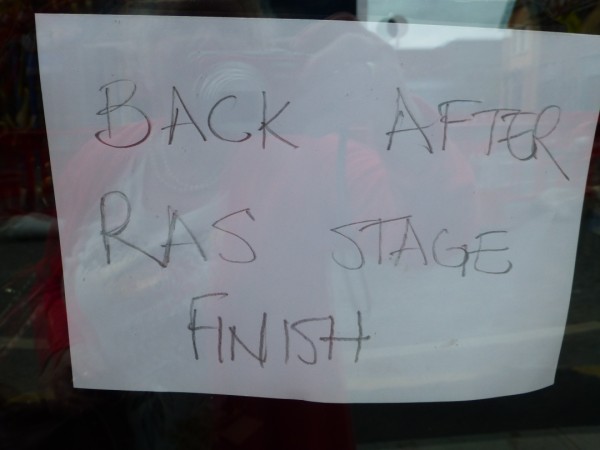 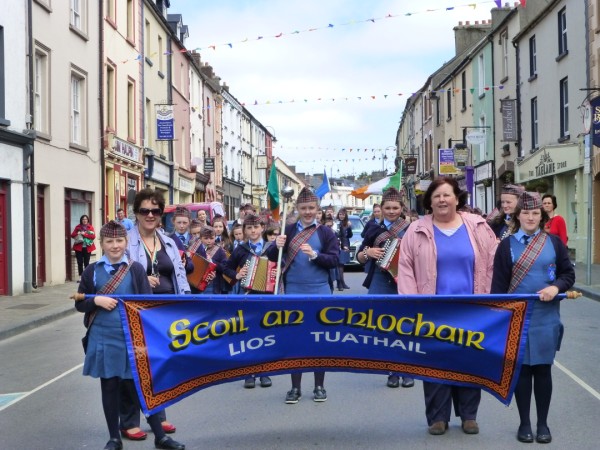 The band played on 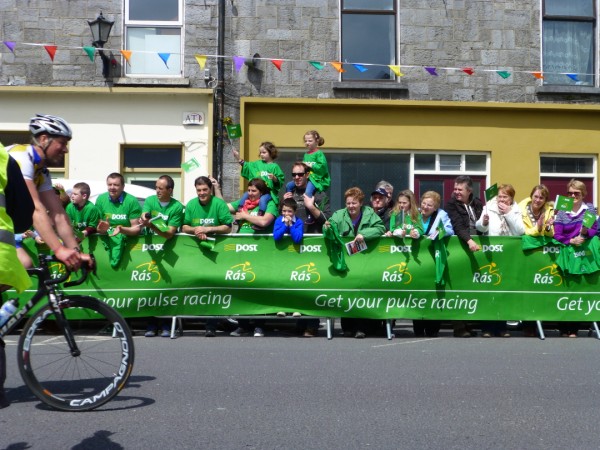 And we all became green clad cycling groupies.

I was there with my camera and  I will bring you the whole story in the next few days. But for today I  will just share the local story as shot by a real photographer, John Kelliher. 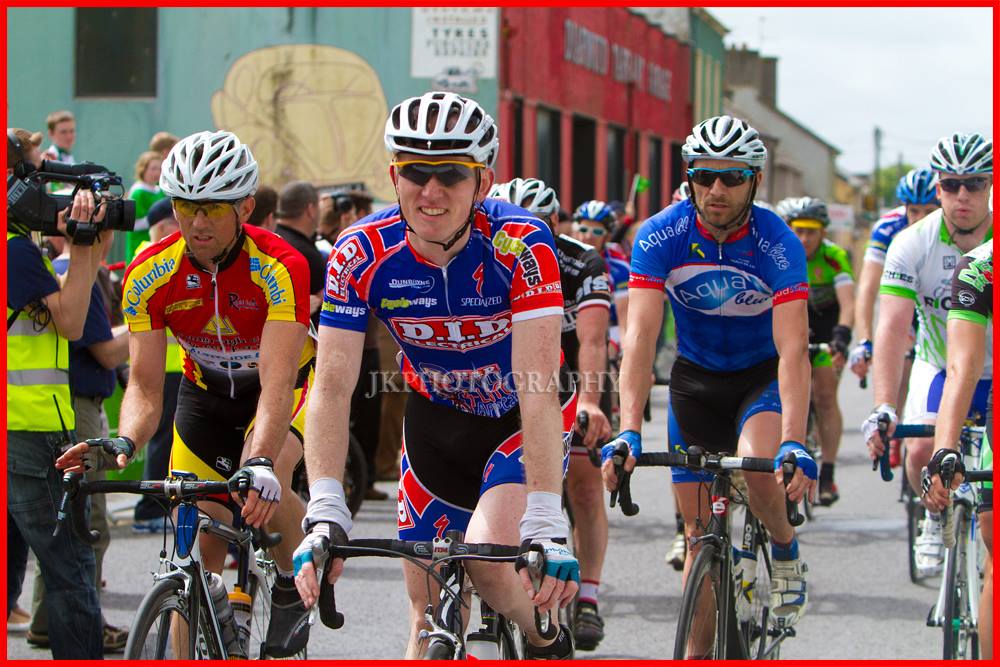 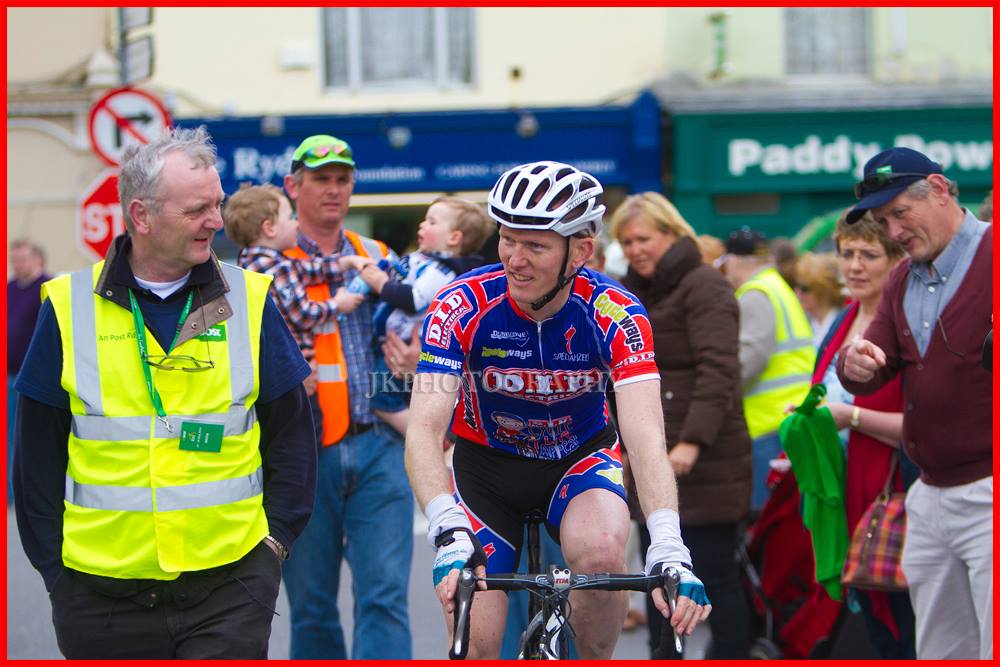 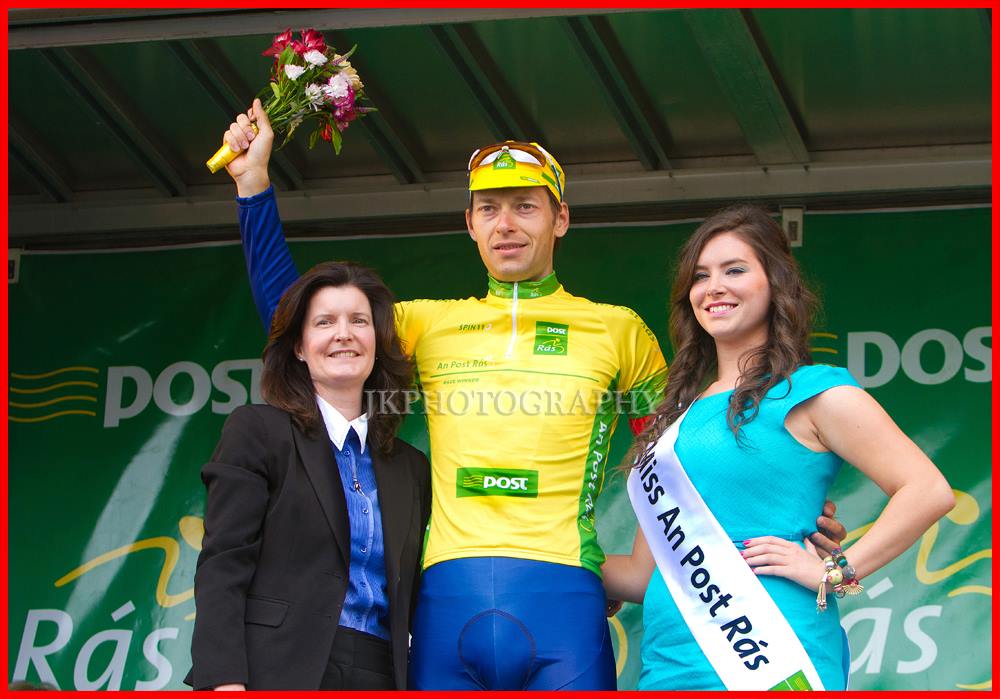 Eugene Moriarty and his dad  and our own local postmistress on the podium with the yellow jersey winner.

Sacred Heart Confraternity, The Galtymore and more from Stage 3 of the Rás