The Rise and Rise of the old-fashioned Barber’s shop.

Men and their  Hair

There was a time when men had their hair cut at the barber’s and women went to hairdressers. The times changed and we had a very strange phenomenon called Unisex Hairdressers. This term was coined in the 1960s to describe a salon that was not gender specific.

There is a certain man who likes to have his hair cut in a male environment so the traditional barber still did a steady trade.

Then we saw the rise of a man who likes to have his hair cut, styled and dyed and to have his facial hair attended to in a men only environment. So now we have stylish salons to rival any ladies’ hairdressers devoted entirely to men. 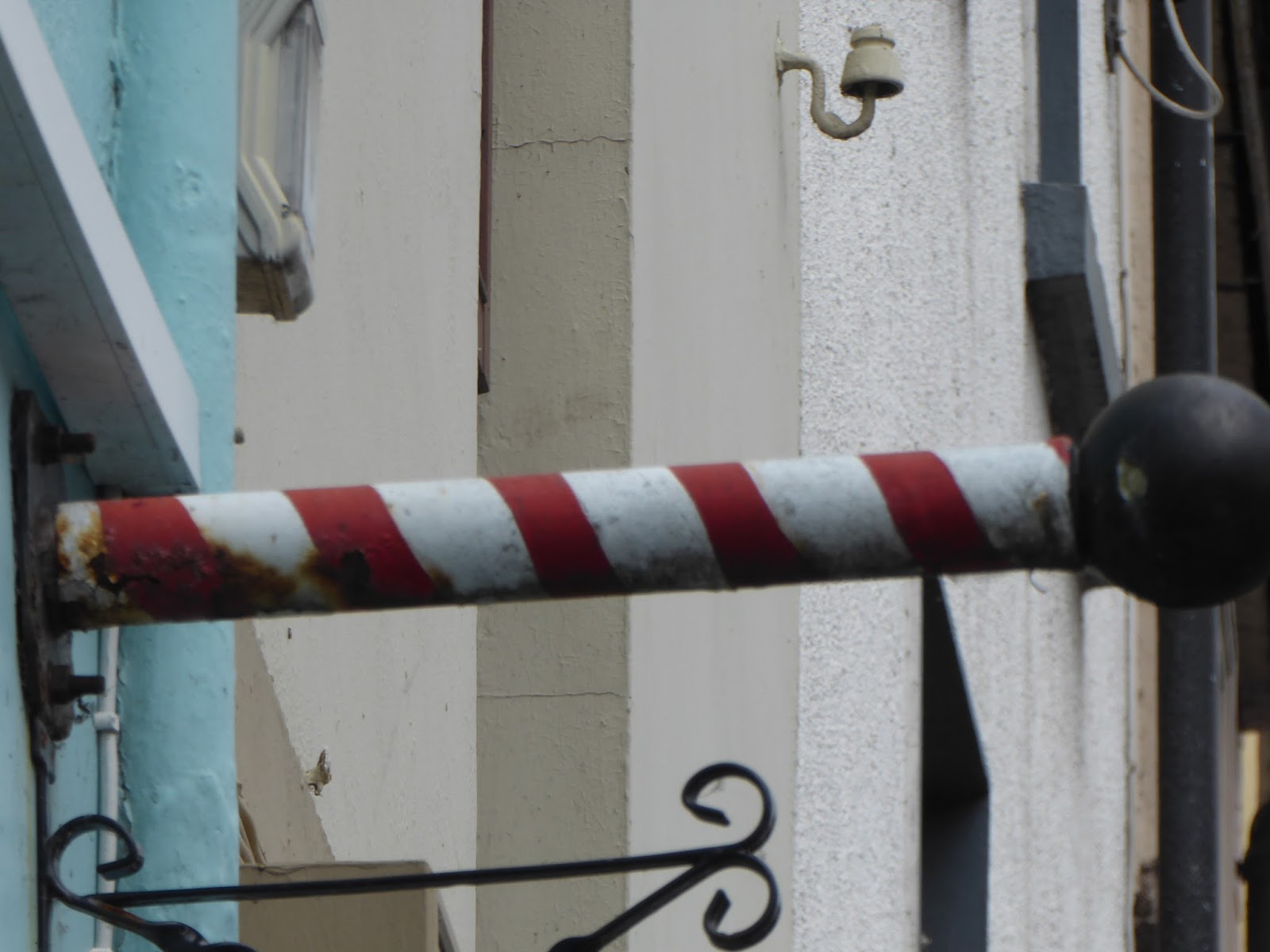 This is a traditional barber’s pole. It projected into the street so that even an illiterate man would know this was the spot for the haircut. The story behind the red and white stripes is that originally the local barber was the person most skilled with knives so he was also the local surgeon. 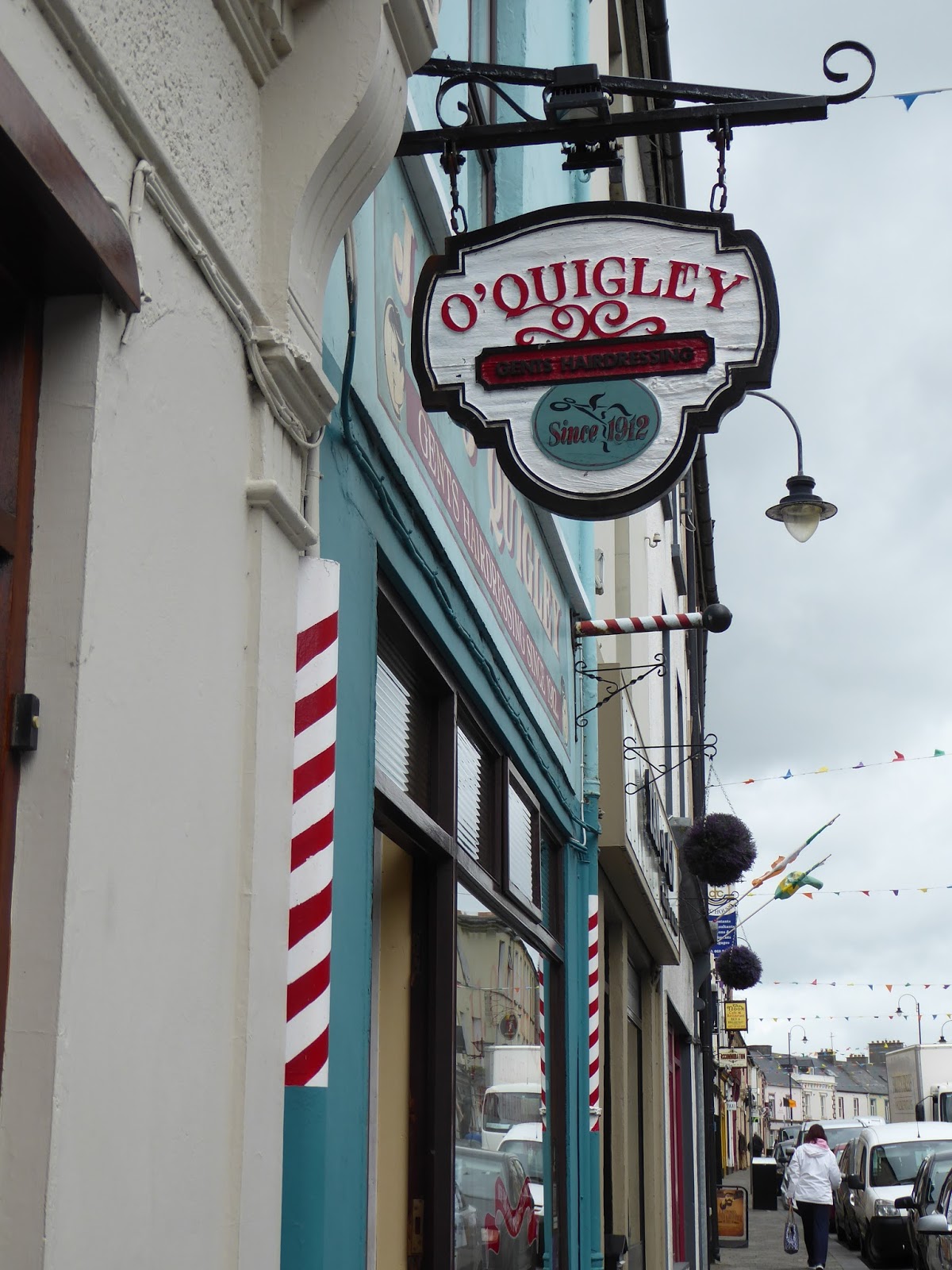 O”Quigley’s in Church Street have incorporated the pole into the shop front. 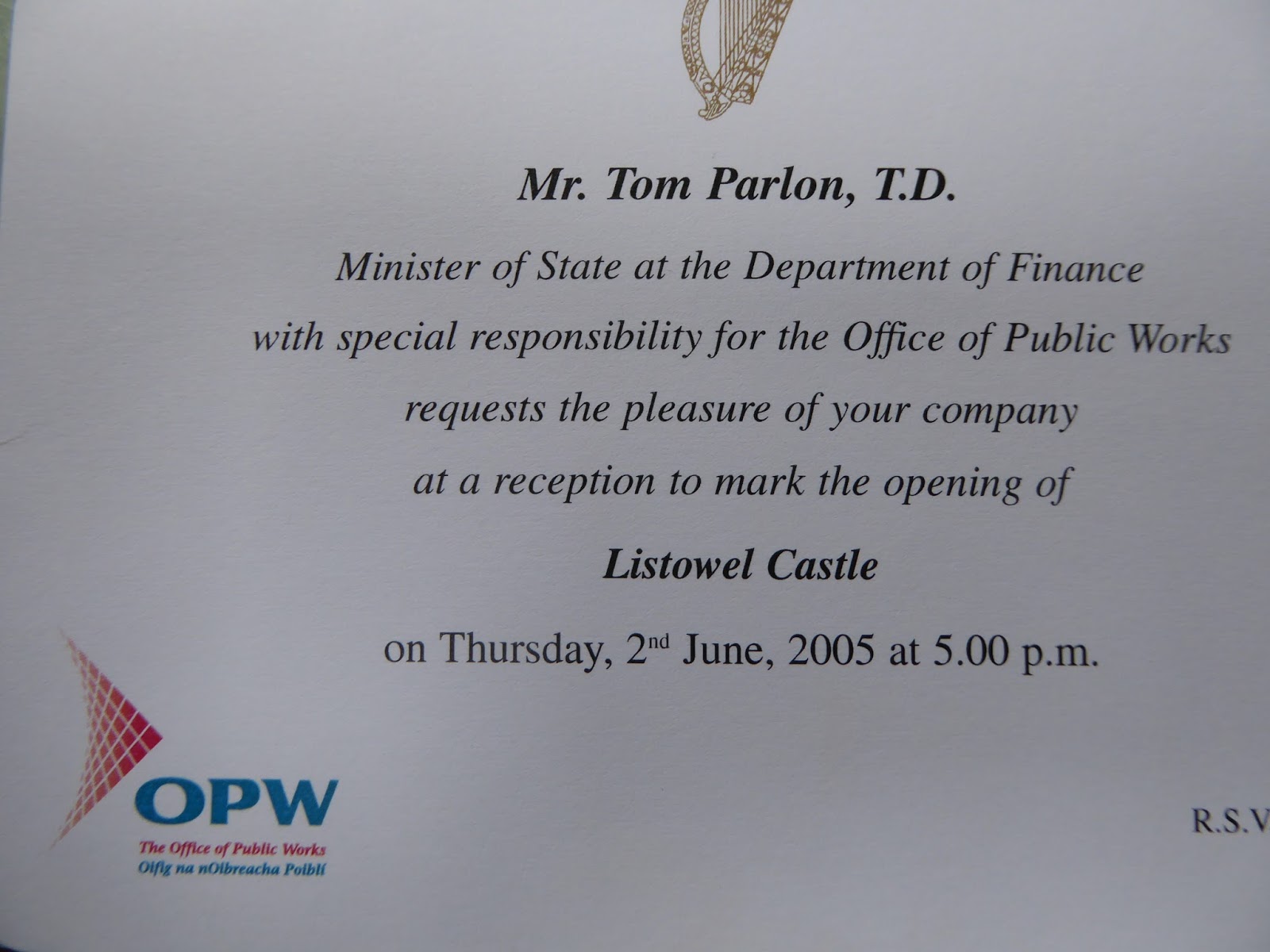 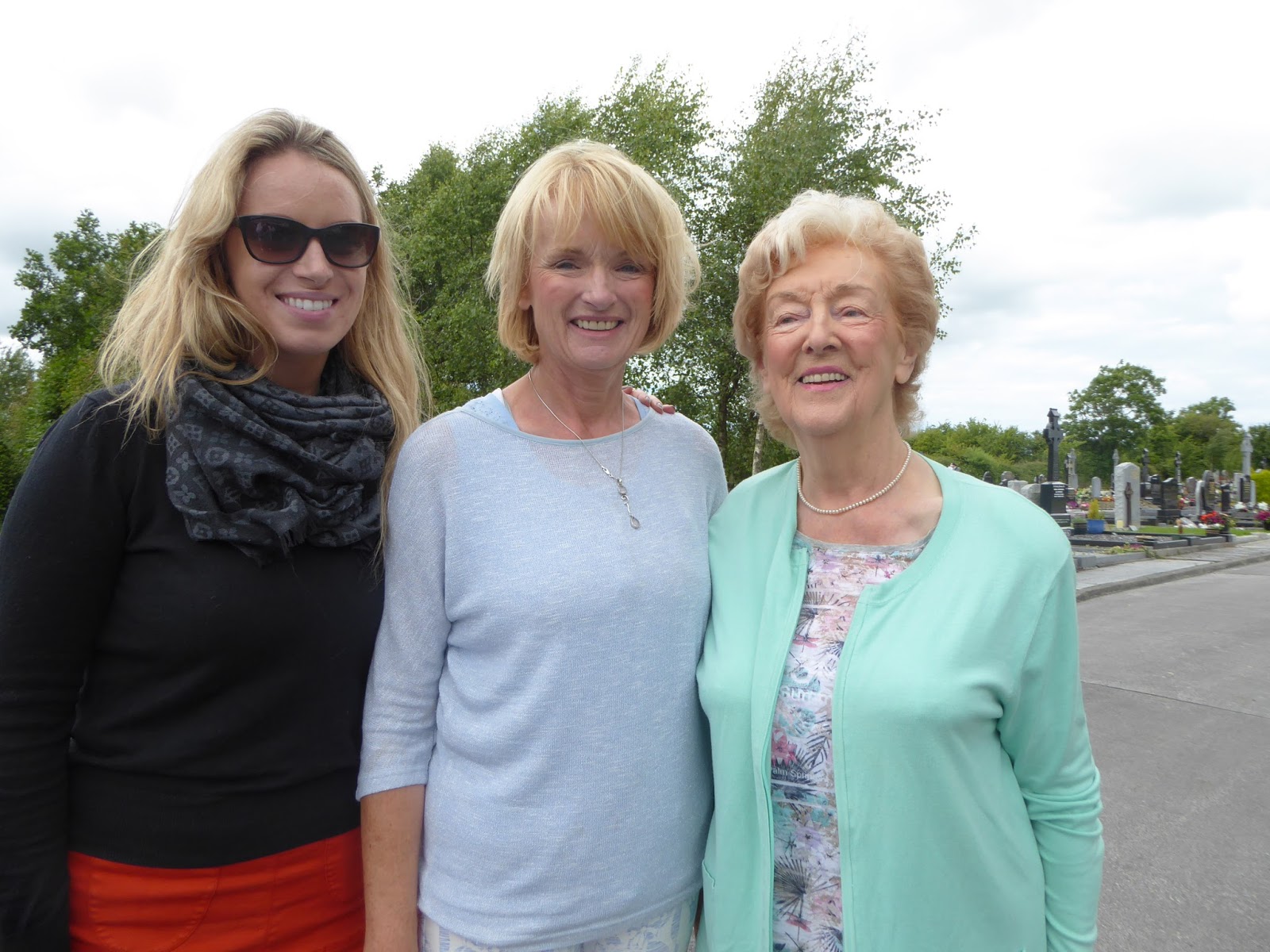 The lovely lady on the far right of my photo is Peggy Gannon and I met her with her daughter and granddaughter as they were visiting a family grave in John Paul 11 cemetery.  Peggy will be 90 next birthday but she has lost none of sharp brain power or her good looks and she is still playing Bridge.

Peggy told me that the last time she met me was when she called to my door canvassing for Jimmy Deenihan and I was pregnant. That child is now 30.

Piseoga or Pishogues are not to be trifled with. My friend who sent me the article about piseogs from Ireland.net told me that an old man from Rathmore told him that Derrinagree was a deadly spot for piseogs…so deadly that they brought in a missioner to get rid of them. When the visiting missioner visited the church he found a pig’s head left on the altar for him.

Now from The Limerick Leader a piseog story nearer to home from the pen of John B. Keane.

AT THE time of writing there
is a big pishogue scare in the district of Lisselton and the townlands adjacent
to it. Lisselton lies at the foot of fabled Cnocanore, where the Fianna of old
hunted and played.

It is only four miles from
beautiful Ballybunion and five miles from lovely Listowel. From time to time
there are pishogue scares in most townlands in North Kerry but the present
Lisselton one seems to be the biggest of all because many people are affected.

One man has a sore hand. The
milk of another is back by a score of gallons every day. For no good reason, a
milch cow in prime condition died belonging to another. Then there is the man
who had a quality greyhound of great promise.

The dog has shown a complete
reversal of form and is now considered worthless. In case the reader might
think that these stories of woe are mere invention journey to Lisselton and
find out for yourself.

There are strong goings on
all over the district and a number of people are living in fear in case the
evil hand of pishoguery is pointed in their direction.

Some locals claim there is
no power in pishogues while others swear that infinite damage can be done. At
present, it is all very mysterious but have no doubt about it there is evil
work in the fields and fairy forts of this quiet countryside.

A Lisselton man to whom I
spoke last week told me that in his opinion the district is on the verge of
many calamities. Apparently if one believes pishogues can do harm then harm
befalls the believer. It is the opposite with non-believers. Those who scoff at
the so-called power of the evildoer seem to escape unscathed.

At present one of the
methods used for the spread of pishoguery is the laying of eggs along the
headlands of the field of those against whom the pishoguer has a grudge.

It could be too that the
pishoguer is jealous. The eggs are laid in a ring and the number put down is
thirteen. The desired effect is that the hens of the victimised person will
stop laying.

Sometimes eggs are found
under cocks of hay but this could be the work of a rogue hen who decides to lay
out.

One can only be certain that
a pishogue is being worked when the eggs are round in a ring of thirteen. Only
white eggs are used.

In all instances of which
I’ve heard and some cases which I have personally seen, there has never been a
brown or speckled egg used. One of the most malicious forms of pishoguery and
one which is being currently practiced in Lisselton is the scattering of milk
within the bewitched circle of fairy forts. Lisselton abounds in fairy forts,
some of them quite famous.

This practice of
milk-spreading is an abominable practice in country districts where the economy
is built around the milch cow. The spreading by the pishoguer of fresh milk is
supposed to dry up the cows of those he envies. Some people swear that the
pishoguer very often has the desired effect. Others have been known to sell off
their stock of milch cows.

Let us hope the Lisselton
scare peters out and that there is no further harm attempted. Most of the
people in that happy district refuse to take it seriously but no one denies
that it is happening and deep down there is the fear that oneself will be next.