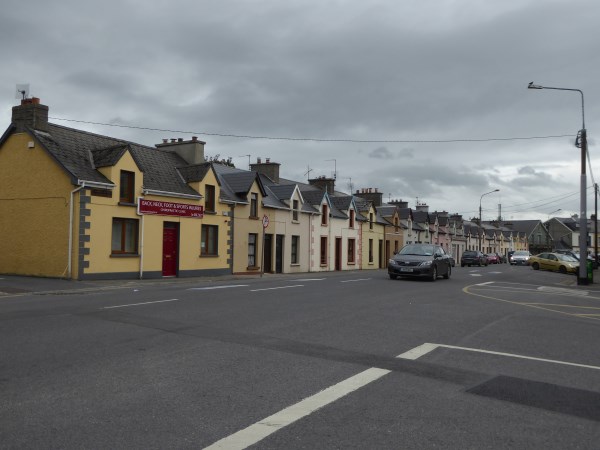 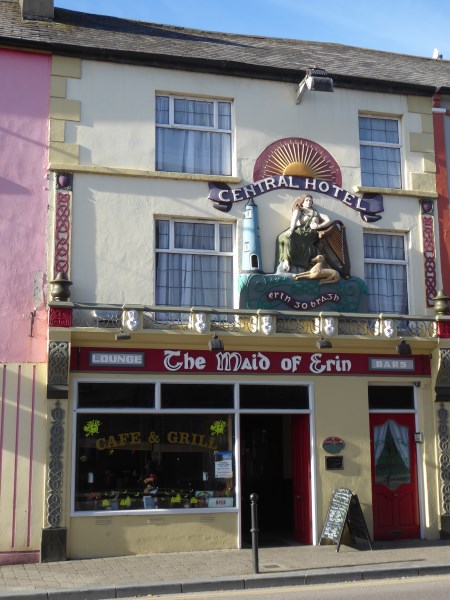 This building in Listowel’s Main Street has one of Pat MacAulliffe’s best known works on its shopfront. Hardly a day goes by without some tourist stopping to photograph this symbol of Listowel.

Below are some of the details on this intrinsically Irish stucco. 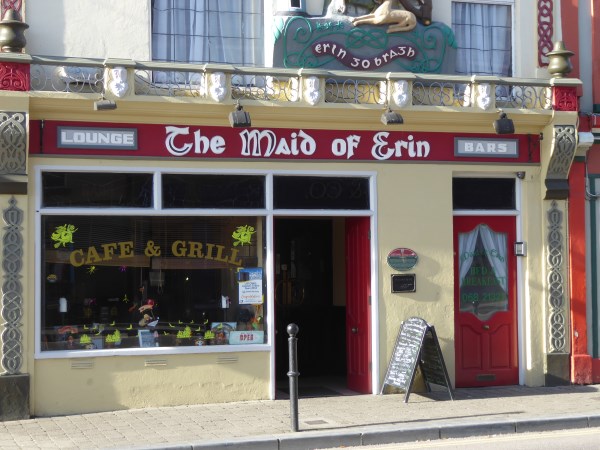 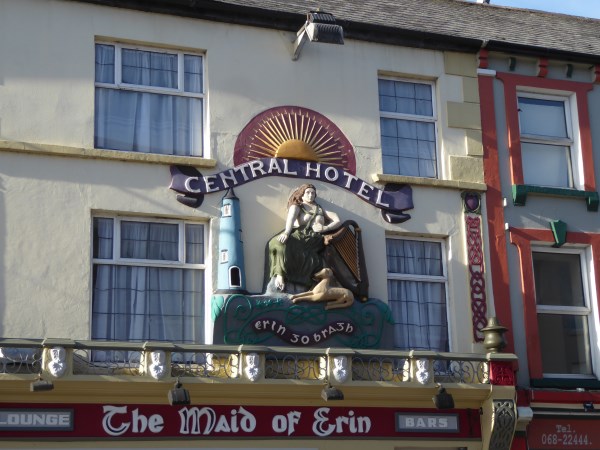 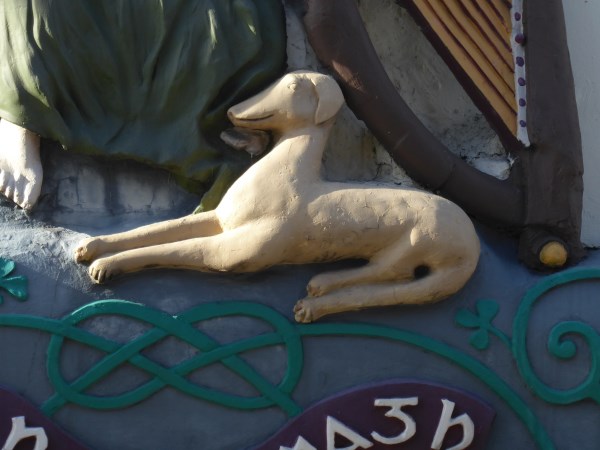 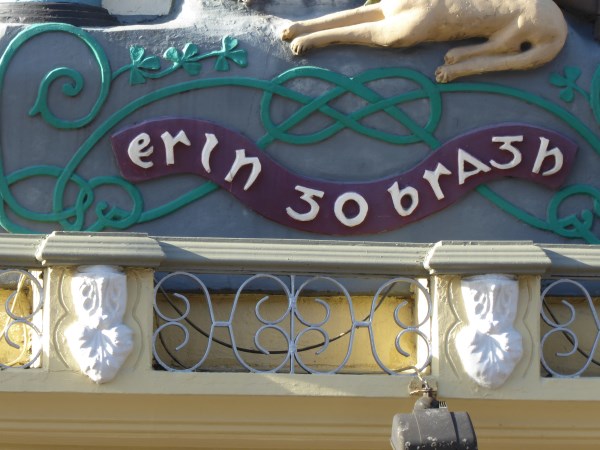 Shamrocks and celtic knot work surround the slogan which translates as Ireland forever. 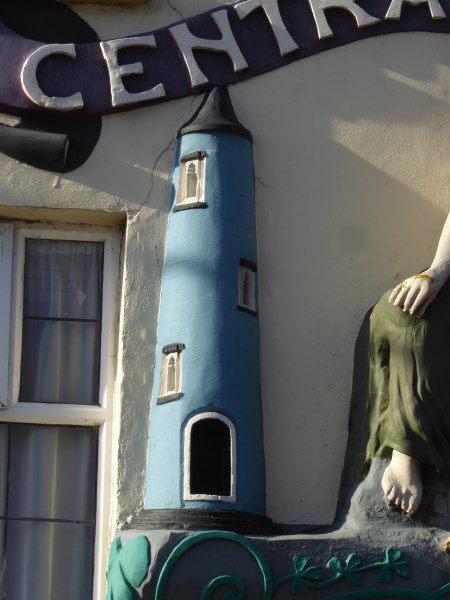 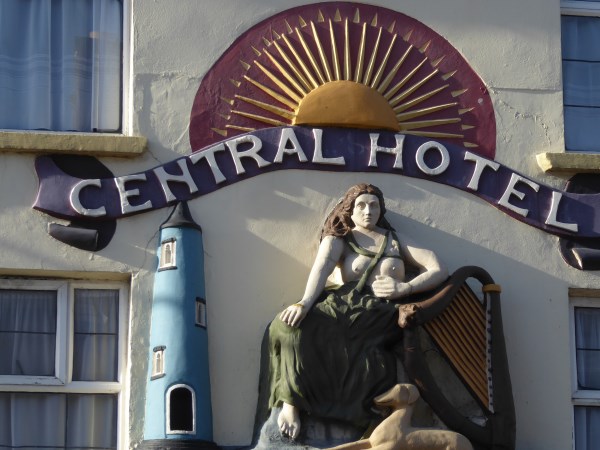 Under the rising sun the bare chested maid is resting on an Irish harp, the official symbol of Ireland. The rising sun at “Fáinne Geal an Lae” is an often used republican symbol of the dawn of a new day for Ireland. A warrior woman as in Dark Rosaleen or Caitlín Ní Houlicháin is also a frequently employed symbol for a free Ireland.

Do You Remember Sonny Bill?

If your answer to the above question is no, move right along, please. Nothing to see here.

If the answer is yes, Sonny Bill was that beautiful horse that they had at my home place in Kanturk and who was eventually sold on to an English buyer. He is now enjoying a stellar career across the Irish Sea. 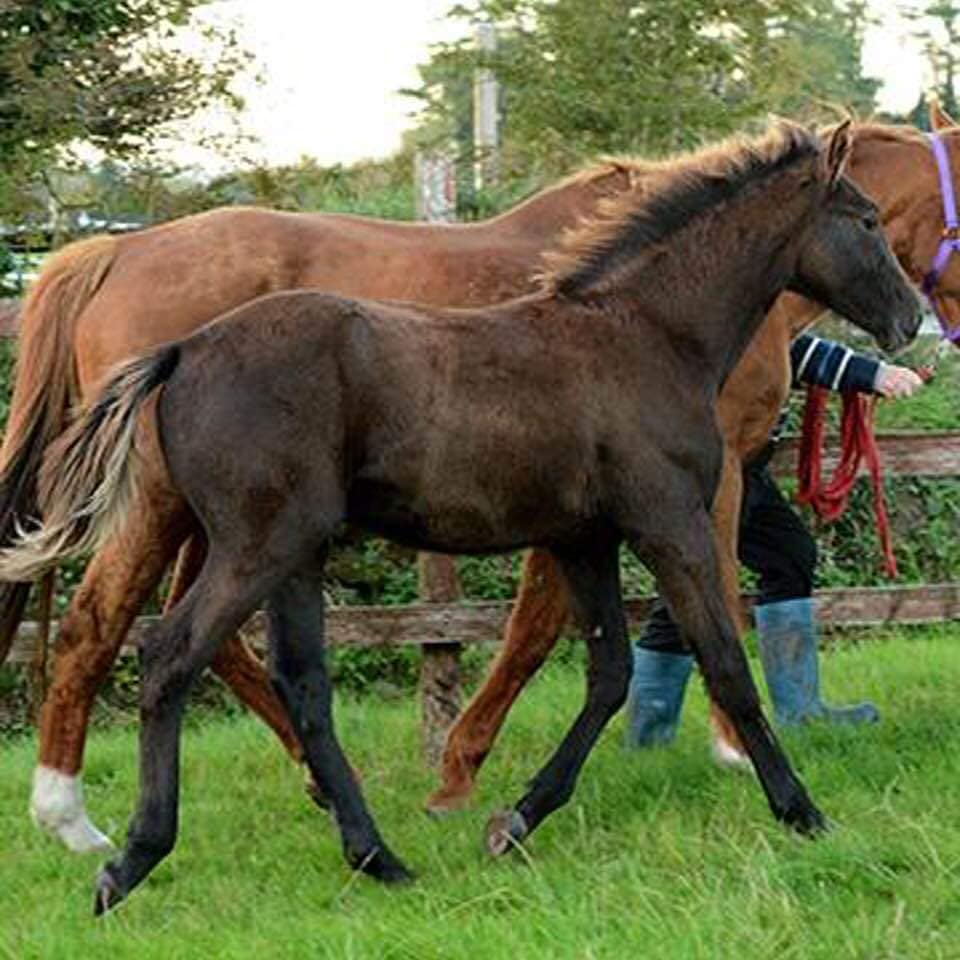 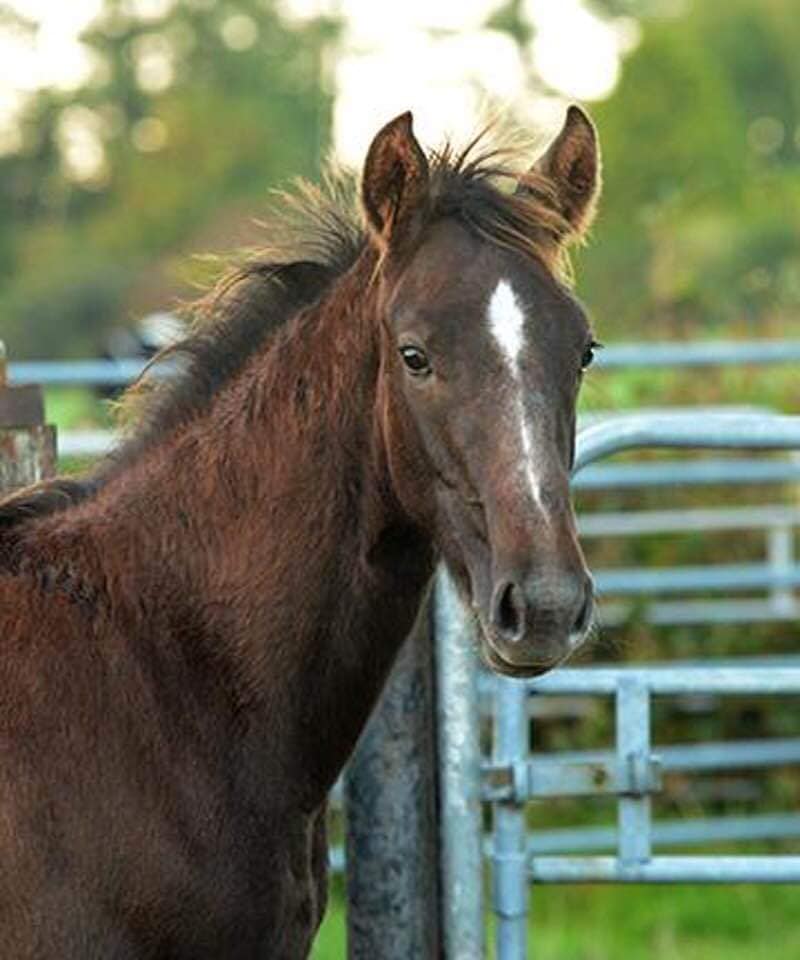 This beautiful foal, seen above running with his mother, is Sonny Bill’s last full brother. Sadly, their dad has passed away so there is a great weight of expectation on these young shoulders.

He is still with his birth family but will be coming to his new home soon at the EPA stable . It’s not really possible to tell if he will be as good as his brother but watch this space and I’ll update you if he begins to realise his potential.

Looking after the Potato Pit

The potatoes were stored in long pits in the kitchen garden beside the house when I was young. There were Kerrs Pinks and Golden Wonders for human consumption in a small pit, but the long pit was of Aran Banners for the farm animals and the domestic fowl. These pits were covered with straw and rushes to protect the potatoes from the winter frost. With the coming of Spring growth, the potatoes began to sprout and if left untouched they would grow long stalks, get soft and lose their nutrition. To prevent this from happening they would have to be turned. The work was done by hand and it entailed stripping the cover off the pit and rubbing the sprouts off each potato individually before repitting the whole lot.

The job is always done on a day following a night of grey frost. That was always a sunny day with a bit of drying and also, there was generally no threat of rain. Down on one knee handling thousands of potatoes on a frosty date is not the most exciting of jobs. The cold east wind and the damp semi hard ground added to the discomfort. The only exciting thing about it was the stripping of the rushes and straw where we suspected rats were hiding. The scurrying of the rats and our attempts to kill them with pikes  are memories now. How those same rats would destroy a pit of spuds if left unhindered is amazing. Rodine was a rat poison in those days and was very effective.

Storied Kerry is a movement you will be hearing lots more about from now on. It is a drive to preserve and celebrate our stories, all our stories and all forms of story telling to all kinds of audiences.

On Saturday last, October 27 2018 Frank Lewis, the founder of Storied Kerry gathered together a Meitheal in Killarney to get this show on the road. 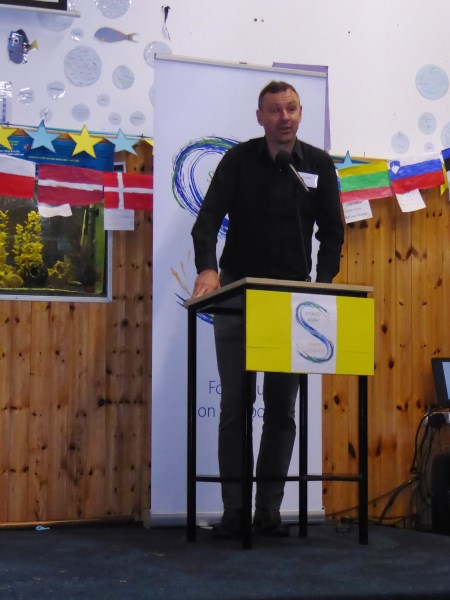 This man is Rory Darcy, a school principal, a philosopher, a story teller and, as we discovered later, a marathon runner.  Rory welcomed us to his school, St. Oliver’s national School, Ballycasheen, Killarney.  St. Oliver’s has pupils from many different countries on its rolls. It welcomes and celebrates them all. There were flags of all the countries behind Rory as he spoke to us and he told us of an initiative started in St. Oliver’s and now practiced in many Killarney schools were the parents of the children, some of them from refugee centres help out with meals in the school and the children get to talk to and interact with a diverse group of parents as well as fellow pupils.

Behind Rory also there was a fish tank. This tank is a kind of symbol of what St. Oliver’s stands for. There are fish of all shapes, colours and sizes in the tank. There are big bubbles helping to keep them alive. These are big acts of kindness but there are also lots of tiny bubbles, standing for small little acts we do to help each other out. The story of St. Oliver’s was a lovely way to start the day.

The next treat for us was a performance from Siamsa Tíre’s seminal show, Fadó, Fadó. It was pure magic. I’m definitely going to see the full show the next time it’s on in Siamsa.

The dancing and singing told the story of the meitheal oibre who came together to reap the harvest as it was done by our ancestors long ago. 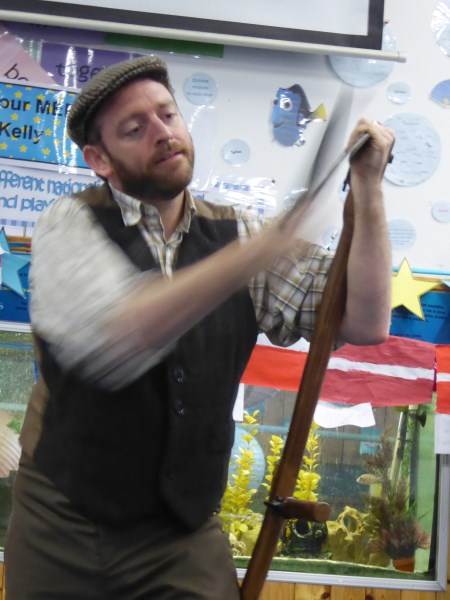 This multitalented performer edged his scythe with a whet stone. He also played the fiddle and sang the most moving rendition of “Ar Bhruach na Carraige Báine” I’ve heard in a long time. 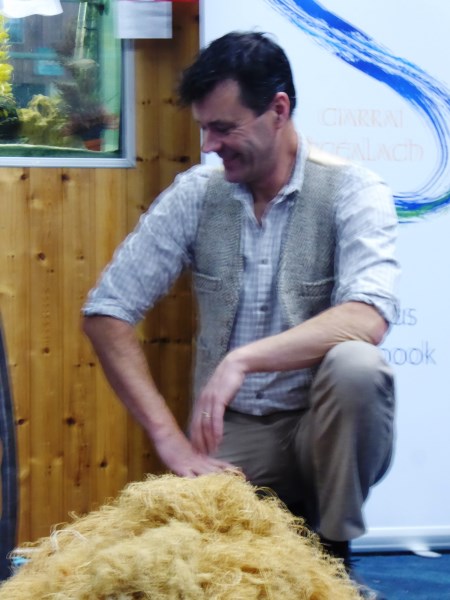 This man brought the corn to thresh. 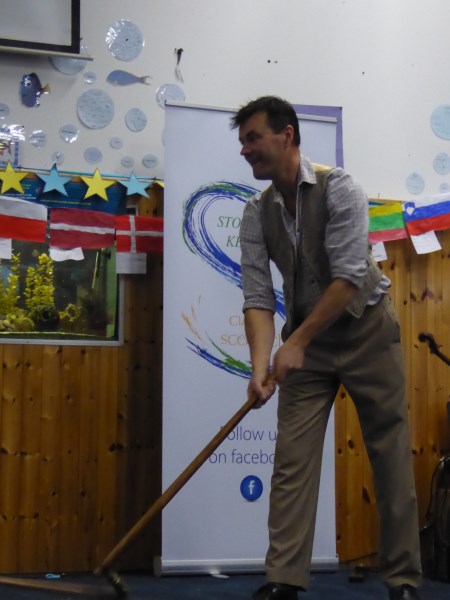 This implement is called a flail and it was used to beat the corn from the ears. 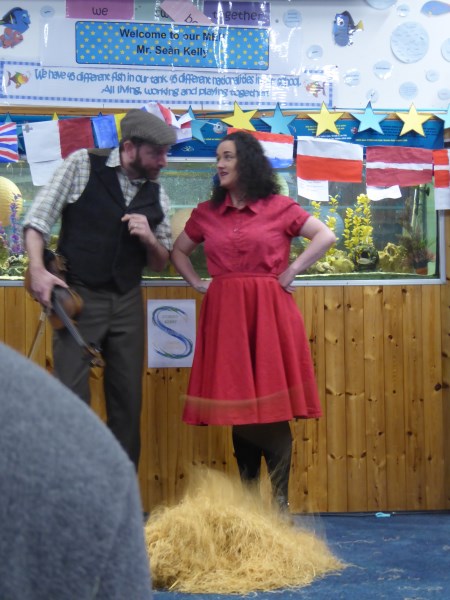 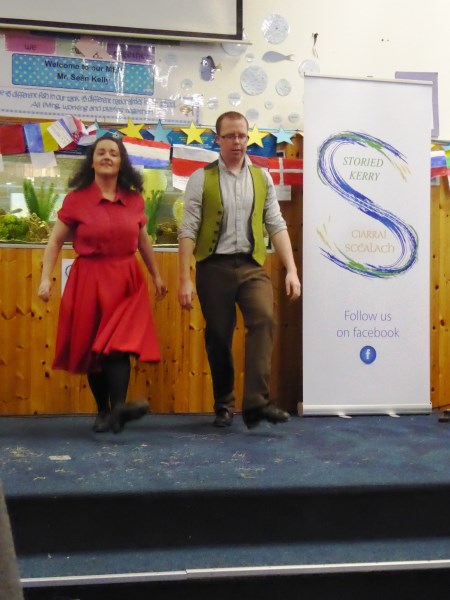 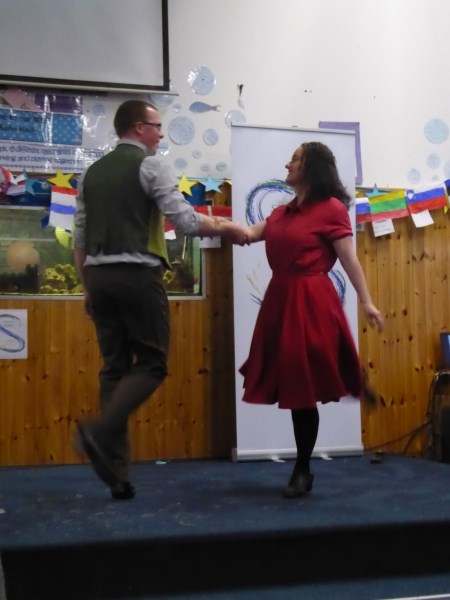 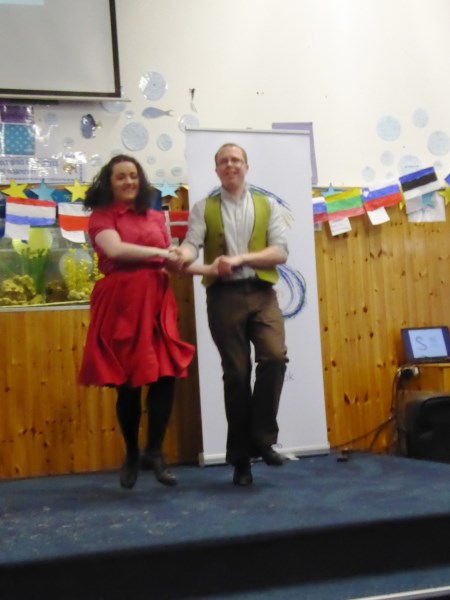 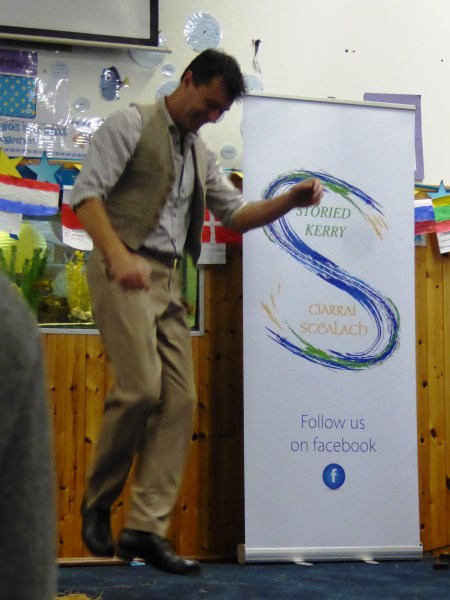 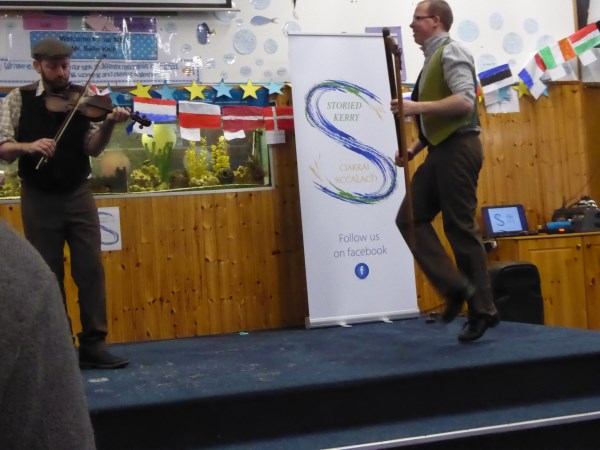 Every action was accompanied by dancing and the rhythmic music of the farm work as well as more traditional music played on the fiddle, the accordion and Uileann pipes. 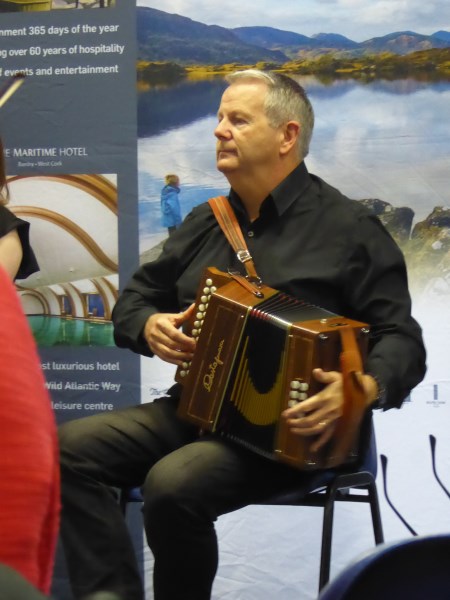 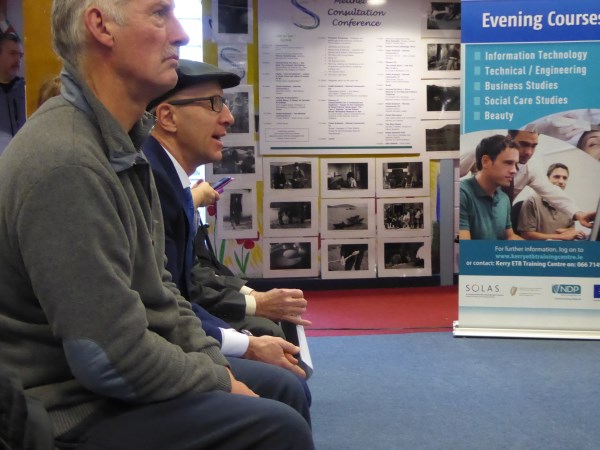 A familiar face in the front row.