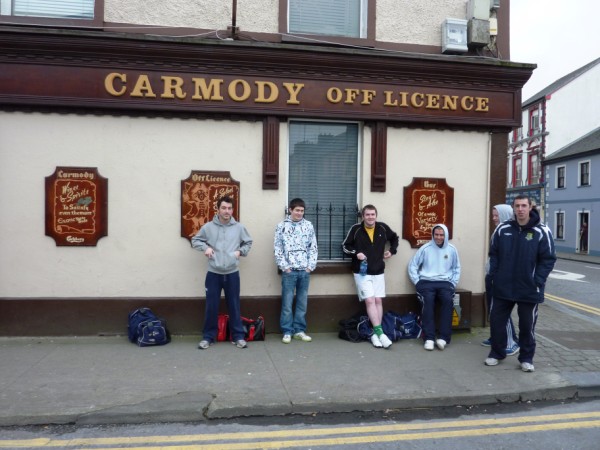 This picture of Listowel Celtic footballers yesterday evoked,for Vincent Carmody, this memory of other very different lads on that same corner in bygone days.

“The
boys at the corner are a throwback to former years when the corner house , then
owned by two eccentric Dillon sisters, was a haunt for pals on their homeward
journey from their nocturnal public house visit. A motley, porter fuelled
crowd, standing at the corner, laughing, talking, belching and of course
sometimes far..ng used draw the wrath of the sisters, and armed with the
previous night’s chamber pot, the sisters would send its contents flowing
out of an opened window, down on the unsuspecting heads of the revellers
below.”

A cornerboy was usually a term of insult and these boys, unlike our soccer players,  were often of the not so law-abiding ilk.

The paper sellers who sold the Kerryman on the streets in Tralee had a peculiar cry, “Kerryman, Kerryman, court and all in it”. A corner boy featured in the edition of 1909.

It also has an advertisement from St
Brendan’s in Killarney who had scholarships of £10 raising to £15 in the
second year. It states that a student who has a good knowledge of Irish and
Mathematics can hardly fail to receive a scholarship.

Other items in the paper
include the sale of creamery plant and machinery at Derrico near Ballyduff on
Sept. 2nd 1909; GAA Tournament, Football and hurling in aid of Ballyheigue
Church on Sept. 5th 1909; Suffragettes had a meeting at Hudson’s Bridge in
Dingle, Mrs Cousins Treasurer of the Irish Women’s Franchise League spoke for
45 minutes; Editorial in the Kerryman remarked on the lack of amusements at our
health resorts.

Kerryman of 25th Sept. 1909 reports murder of water bailiff,
there is a second murder in the October edition; Pierce Mahony a former member
of the Irish Parliamentary Party was accused of evicting a Kerry tenant, but it
was his son  who did the deed; District Inspector
McAuley who was retiring was described by Mr McElligott as one of natures
gentlemen;

But the best account of corner boys was left to us by John B. Keane who made a study of the species.

This article, although rather longer than my usual posts is well worth a read. It also features a reference to The Man’s Shop which is soon to close forever.

Love is always worth waiting for,
and can change the countenance of the most unlikely of characters, writes John
B Keane, in this seasonal tale.

WHEN I was young and more
observant, I spent some of my spare time studying the corner across the street
from this very room where I write at present.

I also studied the denizens of the
area and when my room window was partly open, I would often catch fragments of
conversation.

The corner had one resident Boy by
the name of Johnny Muller. Passers-by would sometimes stop and endeavour to
begin conversations with him. He never responded even when asked for the
location of a bank or the post office.

If he was in talkative mood, he
might sometimes acknowledge the weather assessments of an old lady who passed
down every morning and up every evening. “‘Tis soft,” she might say.

Once she asked him if the weather
would hold. “Could,” he replied.

Lay people do not understand the
function of a corner boy. He is not obliged to respond to questions or make
observations. His function is to be there, to maintain his corner no matter
what. Johnny Muller took his job seriously and this is the reason why he never
smiled.

From my vantage point at the
upstairs window, I occasionally examined his face. There were no wrinkles and
no blemishes. There were no repulsive aspects and no scars. I could never
deduce whether he was grey-haired or bald because of the peaked cap which he
always wore.

I suppose the fairest thing to say
would be that it was a good enough face as faces go. It certainly wasn’t
distinguished but neither was it forgettable. Some said that it was a face
without character but there would be no way of confirming this until he was put
to the test. As a rule, when put to the test, corner boys vanish from the scene
or surrender their attention to distant vistas unseen by the laymen’s eye.

It took me several years to
discover that Johnny Muller’s face was incomplete, as indeed are the faces of
most corner boys. In Johnny’s case, it was clear that none of the great
emotions had ever tampered with it. It seemed to me that it was awaiting
alteration. His facial disposition was drab. His throat clearances and coughs
were run-of-the-mill, as were his rare utterances.

Only his sneezes had colour.
Unfailingly they were highly explosive and when they erupted in close
continuity, they shook him to his very foundations. Otherwise there was hardly
anything to him but we should be forewarned that things change just when it
seems that they will never change.

Johnny Muller was a resolute corner
boy. He spent that part of his life which he didn’t spend in bed, at his
corner. When he first took over, after the previous incumbent had expired in
the wake of a one-sided contest with a carelessly-discarded banana skin, he
foolishly believed that he would have little to do save pass the time and be
mindful of his protectorate. It wasn’t long before he learned that his
responsibilities were legion.

Dogs had to be chastised and moved
on. Querimonious and uppity passers-by had to be studiously ignored. Patrolling
Civic Guards who stopped to rest up awhile had to be hummed and hawed upon
their constitutional way. There were other duties too numerous to mention.

When he arrived at his chosen
corner at nine o’clock each morning, he would first look up the street and then
look down. He would then address his attention to the adjoining street and,
satisfying himself that all was as it should be, would thrust his hands deep
into his trousers pockets and submit himself to a comprehensive bout of
scratching. He would withdraw his hand after a while and draw upon the lobes of
his ears, the point of his chin and the end of his nose. He would rub his
shoulder blades and his behind against the wall at his rear. Finally he would
scratch his ankles and his heels with their corresponding ankles and heels.
Then and only then would he relax and enter into a period of meditation. He
would be roused after a half hour or so by the chiming of the parish clock.

HE was about to return once more to
his reflections when he beheld, out of the corner of his eye, a most
uncommonly attractive creature coming his way.

As she passed by, a wonderful
fragrance assailed his senses. Johnny noticed the elegant figure, the glamorous
eyelashes and the beautiful blonde hair which fell gracefully over her
slender shoulders.

“No chicken!” he
whispered to himself as he roused himself totally to concentrate the better
upon this enchanting apparition. “But then,” he concluded as he
finished his initial survey, “no old maid either.”

By his reckoning she would be a
young 60. By my mother’s, I discovered later, she would be nearer to 80 than
70.

When the visitor turned on her heel
and retraced her steps Johnny Muller gave her the nod of friendly salutation
and also the nod of absolute approval. An almost imperceptible smile appeared
on her angelic features. From the look on Johnny’s face it was clear that he
was smitten. He was overcome by an unfamiliar giddiness. It was the kind of
giddiness that overwhelms characters of Johnny Muller’s ilk once in a lifetime.
He had, up until this time, been fond of saying to himself “I wouldn’t
give tuppence for a woman, any kind of woman” when an attractive member of
the opposite sex passed his corner.

Suddenly she had stopped and was
looking straight into his eyes. A sparkling smile had now spread itself across
her heavily made-up face. She had noticed him before, not once but several
times and always from a distance. She was certain that he had not seen her. He
would have reacted if he had. Now that it was Christmas, she would make the
most of her chance.

“What do you do here all
day?” she asked gently. It was the way she said it that hastened the
melting process which had already begun in the underworked furnace of his
heart.

Normally he would never answer when
a strange female addressed him but now his reply was warm and instant.

“I keeps an eye on
things,” he told her. A puzzled frown appeared for a moment on her shining
visage. Johnny was quick to notice that perplexity added to her allure.

“You sort of watch over things?”
she suggested. Johnny nodded eagerly and then, to give substance to his role,
his features assumed a deadly seriousness as he looked up and down and hither
and thither, as he scanned the faces of passers-by in search of evildoers.
Satisfying himself that his bailiwick was secure, he favoured her with a smile
of unconditional reassurance.

“Do you watch over me?”
Her voice quivered as though she would burst into tears.

“You above all,” Johnny
found himself saying.

“Me above all!” She
repeated the words as though they were the last line of a prayer. Johnny nodded
reassuringly as they sought to solve the mysteries in each other’s eyes. Her
next move was to take him by the hand. He followed without a word until they
reached the entrance to a clothier’s called The Man’s Shop.

After they had entered, some female
onlookers, his mother among them, commented on the incident. The conclusions
they drew were interesting. Johnny Muller always had an untouched look about
him. It was certain that he had never been touched by a woman’s hand, at least
not since his infancy when he submitted himself to his mother’s ministrations.

“That woman’s search is
over,” my mother spoke with assurance. “She always knew what she
wanted and she’s found it at last.”

When the happy pair emerged from
The Man’s Shop, there were gasps from the onlookers. Gone were the shabby
clothes, the greasy cap and the worn shoes. Resplendent in his new outfit,
Johnny Muller took his fiancee’s hand and led her across the road where he bade
goodbye to his corner of 40 years.

What the onlookers would remember
most was Johnny’s face. It was the complete product at last. For her part, she
radiated happiness. Her new partner was a far cry from the shop-soiled
assortment she had put through her hands over a lifetime.

Neither of the happy pair was seen
again in the locality but the locals evinced no surprise.

“It’s
that kind of town,” my mother would announce modestly whenever Christmas
came round and the subject of the disappearance was drawn down