Dillons, Ballyduff, the whooper swan and updates on schoolboys and postmen 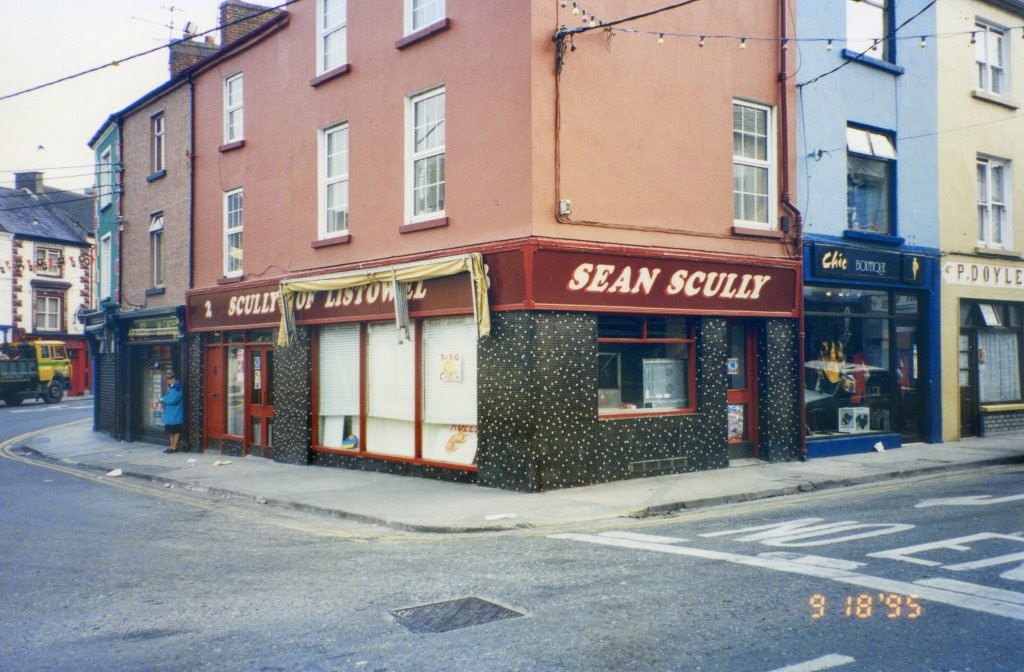 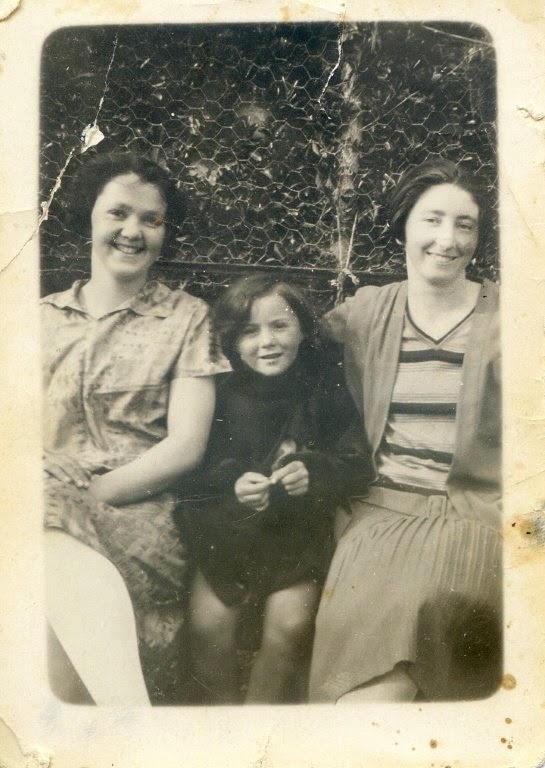 Pat Del Savio sent me these photographs. Pat is a daughter of Theresa Dillon, whose parents were Patrick Dillon and Johanna Lynch. Theresa kept the Dillon name all her life as she married James Dillon from Dromerin. 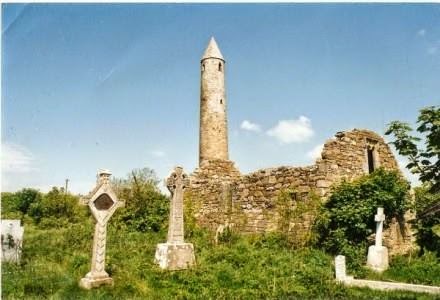 This old photograph (I know it’s old because there is scaffolding up on that round tower for ages now) I sourced on a Facebook page on Ballyduff. The writer is about to close the page so I’ll steal a few gems to share before he takes them down.

1. Ballyduff or in Irish “An
Baile Dubh”, means the “black village”.

2. The Rattoo Round Tower is the
only complete round tower in Kerry.

3. On 1 November 1920, the Black
and Tans shot local man, John Houlihan, dead and burned the creamery to the
ground.

5. Canon William Ferris, the
author of “The Gaelic Commonwealth” and many other works came from
Ballyduff.

6. The Boys of Ballyduff song
was written by P.J. Sheehy on the occasion of the Ballyduff/Crossabeg
All-Ireland Hurling final in 1891.

7. Rattoo Heritage museum is
located in the village. The museum contains local and archaeological
discoveries about North Kerry.

8. John Mahony (1863–1943) was a
famous Ballyduff Irish sportsperson. He played hurling with the Kerry senior
inter-county team in the 1890s and captained Kerry to their only All-Ireland
hurling title in 1891.

9. RTE television, the first
station in Ireland, went on the air on the 31st December 1961. Not many people
in Ballyduff had television sets at this time so people gathered nightly on
the street in the village to watch a television which was switched on in the
window of Kearney’s shop!

10. The Church in Ballyduff
village was first opened on June 20th 1837 and was called after SS. Peter and
Paul.

11. Rahela Grotto was built in
1957 which was known as the Marian year in honour of Holy Mary. Babies that
were born in the Marian Year, whether they were boys or girls, had to be given
the name Mary-even if it was a second name!

12. Tobar Rí an Domhnaigh (Well
of Sunday‟s King) is a Grotto and Holy Well on the Ladies Walk. It is also
known as the Well of Lepers.

13. Tom Dunne, Glounerdalive was
the first local man to ride a bicycle (Penny Farthing) through the village!

14. Tobar a Leighis is the
grotto and Holy well near the Cashen. The water from this well is said to heal
your mind as well as your body! It is said that a Golden fish can be seen in
the well by people who are cured! St.Bridget visited this well when she came to
Kerry.

15. Ladies used to walk everyday
from the Great House in Rattoo to another Great house in Ballyhorgan. In those
days, there was a law that stated that the people living on the road that
linked the two houses were not allowed to have windows facing the road so they
could look at the ladies walking by! This is why the road is now known as
Ladies Walk!!

16. Kerry were represented by a
Ballyduff team when they first won the All-Ireland Hurling Championship in 1891

17. The library in Ballybunion
was moved brick-by-brick from the church in Rattoo in 1952!

18. Edmund Barrett , a very
successful sports-man was born in Ballyduff in 1880. In 1908, at the Olympic
Games held in London, he won a bronze medal in wrestling, and also won a gold
medal with the London tug-of-war team. He also won an All-Ireland gold medal
with London in hurling against Cork in 1901. He is the only Irishman to win
two gold medals.

19. Butter was once made in The
Ballyduff Creamery. The Churn was installed in 1958 and the butter maker until
1971 was John McCarthy.

20. There was an underground
tunnel called a Suterrain linking Rattoo Great House and Ballyhorhan House.

( I take no responsibility for the truth or otherwise of any of these facts. I just copied and pasted.) 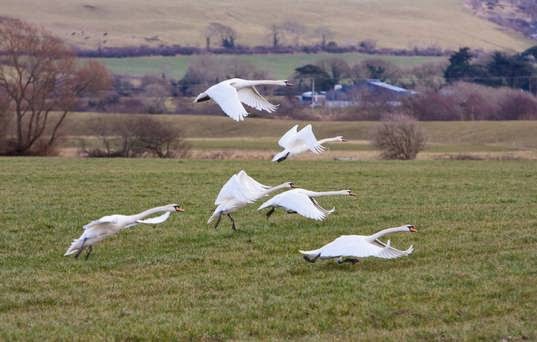 People in the Ballyhorgan, Lixnaw, Finuge area have been campaigning diligently against any planned erection of massive wind turbines in this lovely area of North Kerry. The latest salvo in this campaign is on behalf of the whopper swan.

The above photo and the following article appeared in last week’s Kerryman;

“Iceland to Finuge – Home of the Whooper Swan’ reads the slogan against a stunning picture of the birds coming into land taken in Finuge on Monday. The first 70 birds of an expected 500 arrived on Monday in their usual migratory path from Iceland.

Finuge’s importance as a winter home for the species is well-known within birdwatching circles nationally with ‘twitchers’ – as they’re known – coming from as far as Kilkenny and Wexford to observe the graceful creatures feeding and nesting in Finuge.

But it is feared the erection of the ten turbines, if given the go-ahead, could pose a major threat to the birds. Awareness of their presence in Finuge comes as manna from heaven for the hundreds of locals fighting against the wind farm plans.

“What I would say is that these birds are very accident prone as low-level fliers with poor vision,” local man Matt Mooney said. “We’re trying to raise awareness of their presence at the moment and the water plant at Scartlea cross is one of the best places to view them from,” he said.

It is believed Finuge is one of the most important sites in the entire country for the species, home to ten per cent of their Irish numbers during the winter.

A survey of the Whooper Swan in 2005 found 9,748 wintering here, but that figure had declined to 5,000 by 2010 amid fears the proliferation of windfarms along the west coast of the country in that time impacted their migration patterns.

Birdlife International found that the emergence of windfarms here posed a ‘most recent threat’ to the Whooper. The threat is not just through direct collision with wind turbine blades, Birdlife International found. It said associated affects of the machinery poses a threat also, not least the impact of the low-frequency noise produced by the turbines on the birds. “We’re the first spot for them to land on their 800-mile trip from Iceland and they roost and breed here,” Mr Mooney added.” 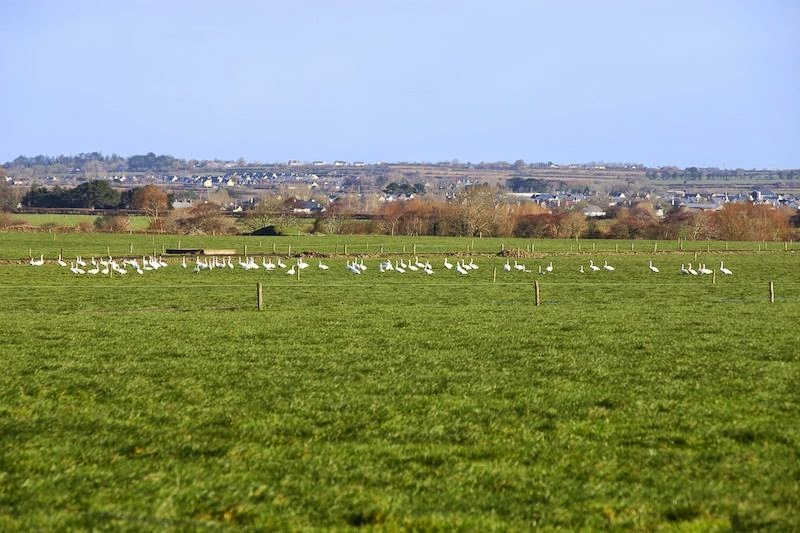 1930 Schoolboys….the story behind the picture 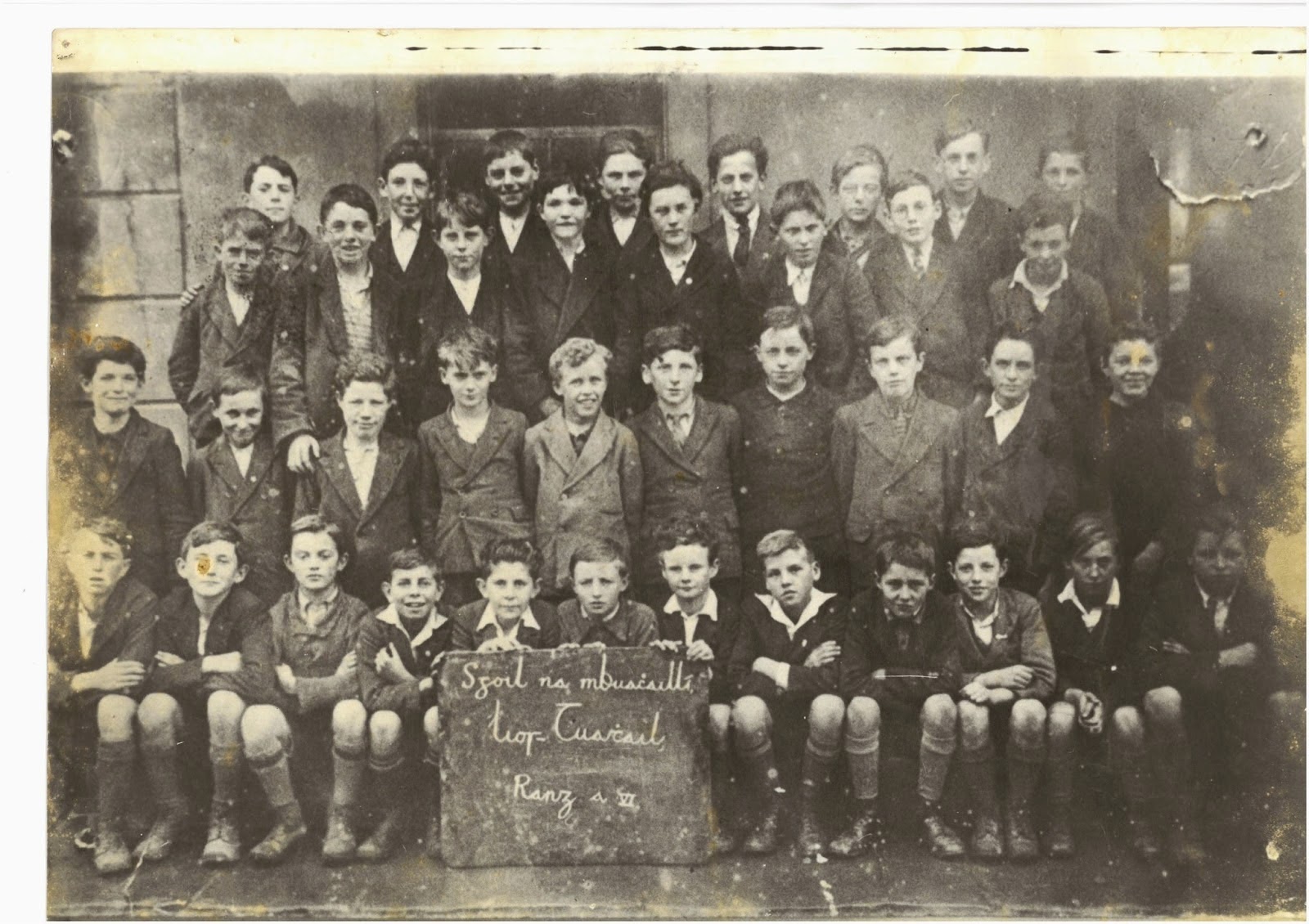 The old boys’ school in Listowel consisted of 6 classrooms, 3 up and 3 down.  The Low Babies/Junior Infants class was taught in the library across the road from the school. In the early 1930s an additional room was added on. While this refurbishment was under way, the 6th class were taught in St. Patrick’s Hall. This photograph was taken there.

Vincent Carmody told me the above information and he also set me straight on a few of the boys’ names.

Gerald Relihan who died not too long ago was probably the last of these boys. He is pictured at no. 3 in the back row and not no. 2 as stated last week.

In the middle row the Mick McCarthy at no. 4 is the famous proprietor of The Embankment in Tallaght. He was the brother of the late singer/songwriter, Seán.

Tony McAulliffe, no.1 in the second row went on to play for Kerry in 1938.

Martin Quigley , No.9 in Row 2 married a sister of Jackie Moore who is standing next to him in the photo.

Lovely email re the postmen 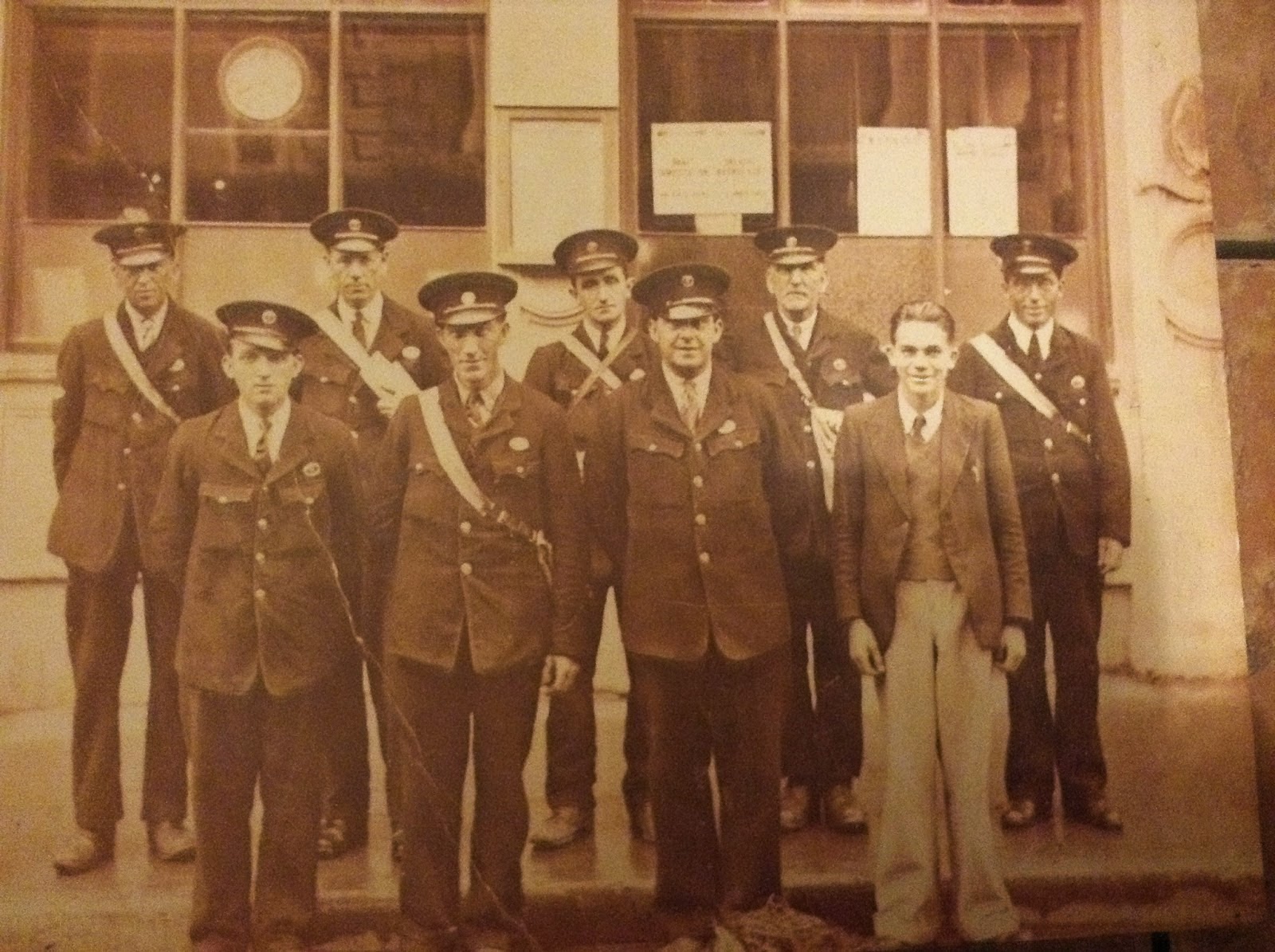 Vincent Carmody’s photo of the postmen evoked many happy memories for one of my correspondents, Cathy Dunne.

Here is what she wrote:

Mary, thanks for the great photo of the postmen.  Denis Horgan (pops as I used to call him) was a lovely man.  When I first started working as a secretary at Jowika (later Stag Cutlery) I stayed with the Horgans.  Mrs Horgan (nee Hickey) was my dad’s next door neighbour and friend.  Their daughter Frances was a good friend of mine.  We meet up in London as she lives not too far away in Enfield. Before he went to bed every night he polished my shoes for next day!

Paddy Moloney was the postman that took the van with the post to Lyreacrompane P.O. for delivery around the area by the postmen on bicycles.  When I first went to live in Germany my mother used to go out to the “cross” to see if Paddy had any letter from me.  That time post used to take quite a time from Germany so she gave up after a week.  The next week he had a letter and brought it into the house for Mom as he knew she was worried.  I also used to know Denis Stack and his daughter was also a friend of mine.

Presentation Sisters in Listowel, the ultimate sacrifice and some changed facades