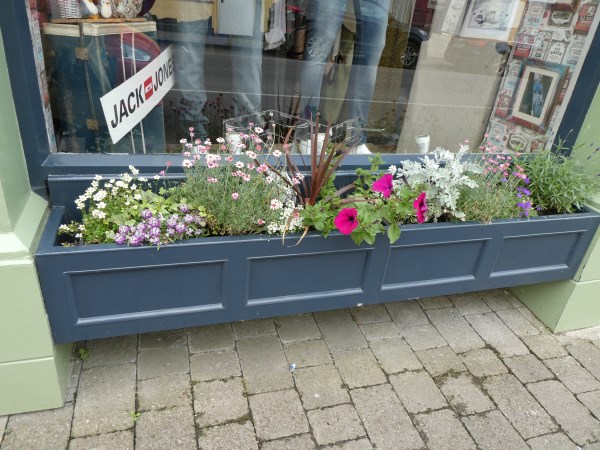 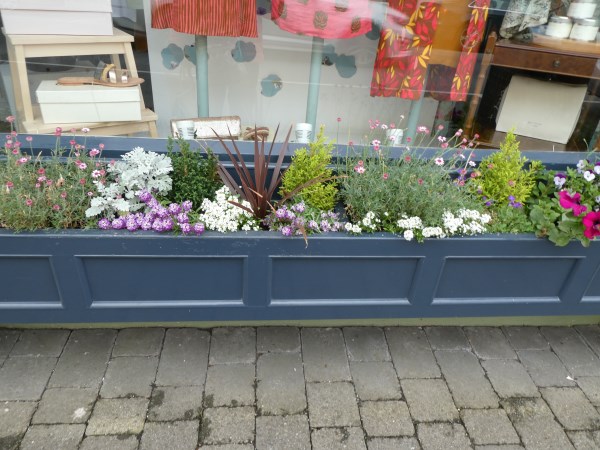 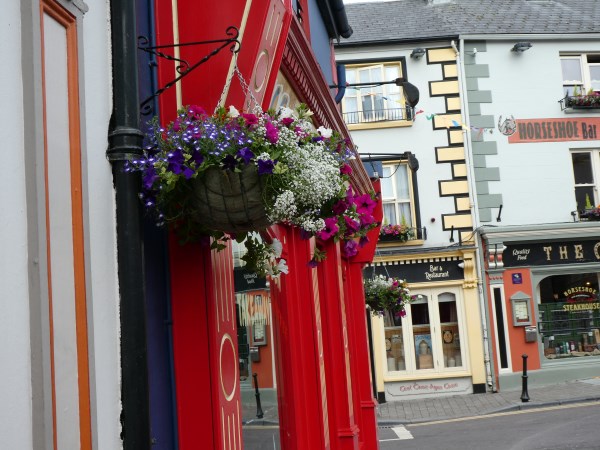 Listowel retailers are pulling out all the stops for the judges in the hope of adding another accolade to the town’s 2018 Tidy Town Award.

Nationwide cameras are due in town today. 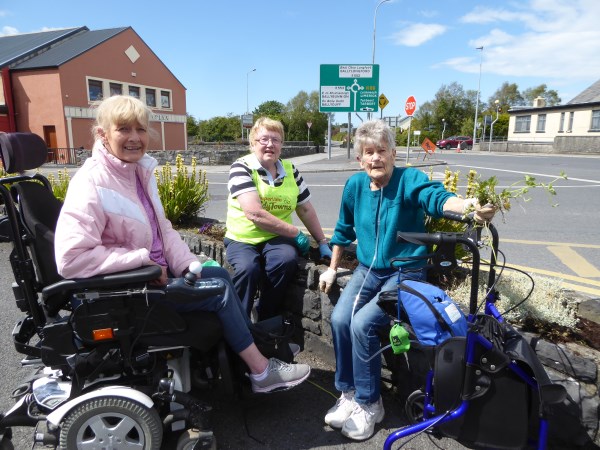 Jackie Barrett Madigan, Breda McGrath and Eileen Worts were putting the finishing touches to the flowerbeds at Morkan Tiles. Breda was up since first light litterpicking. 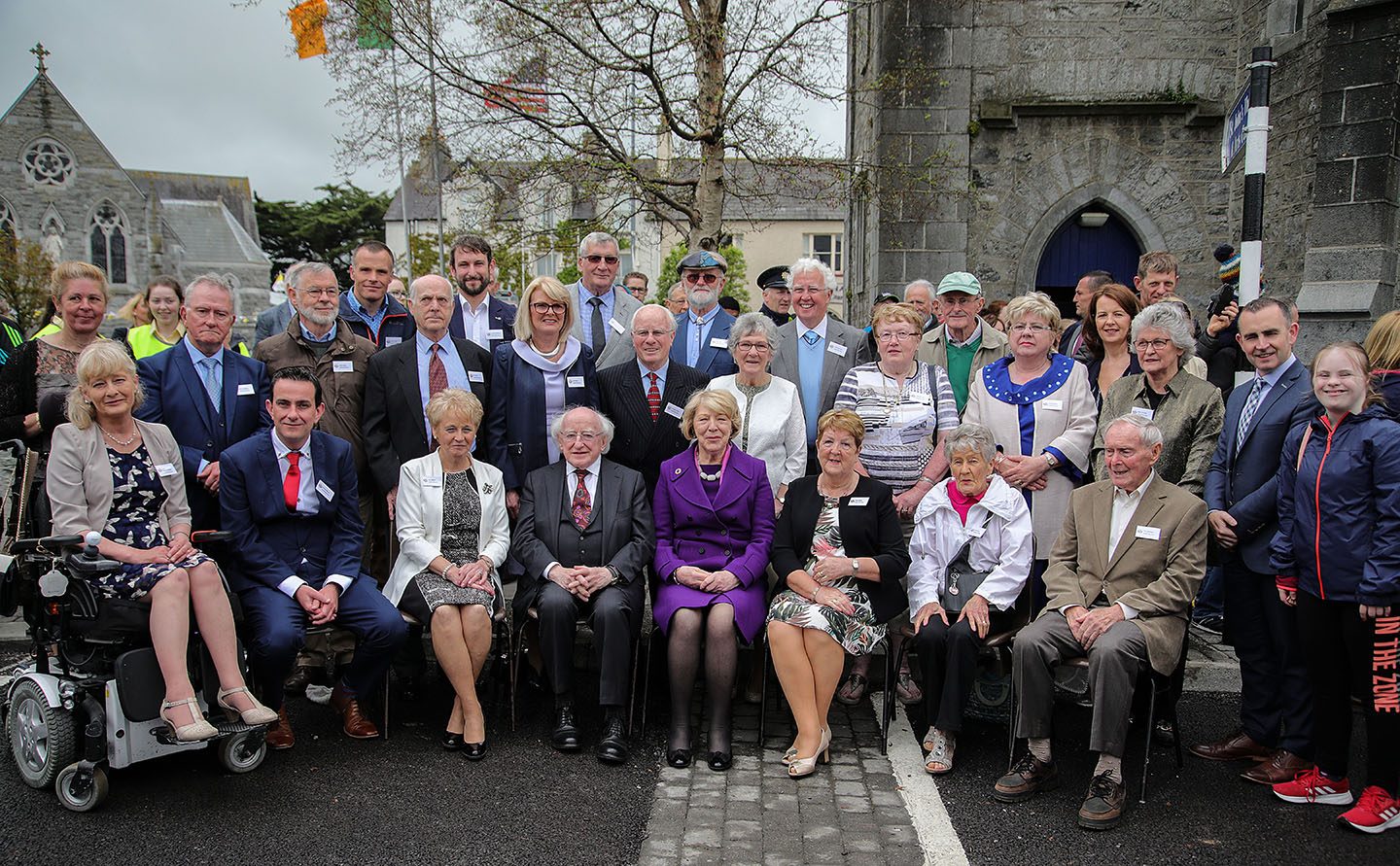 Met on the Street 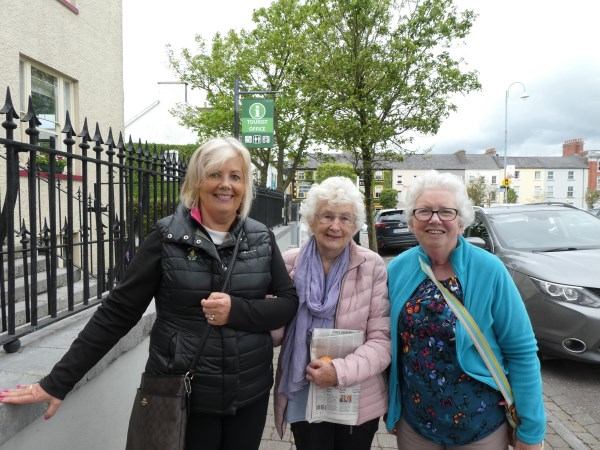 Liz Dunne took a picture of me with Carmel Moloney and Alice Sheahan as they were out and about on May 29 2019.

And then I took a picture of Liz and Jim as they took a break from hanging an art exhibition. 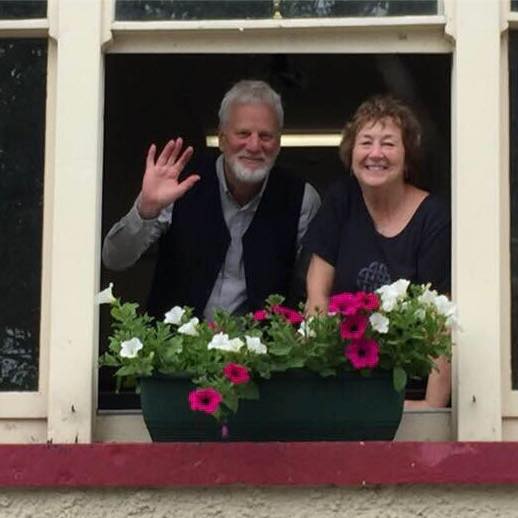 It is 100 years since The Wizard of Oz came into being. It is a story that has stood the test of time and is still popular today, in both the old story form and the more modern film version. To celebrate the centenary The National Children’s Literary Festival at Writers’ Week decided on this story as their theme for the 2019 festival. the local shops got on board and decorated their windows with Wizard themed displays. Here are a few. 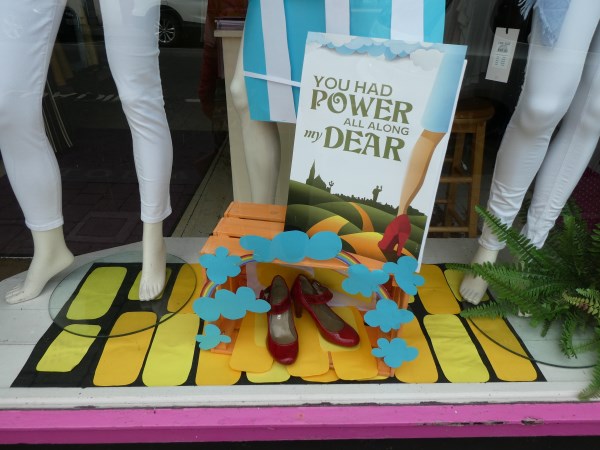 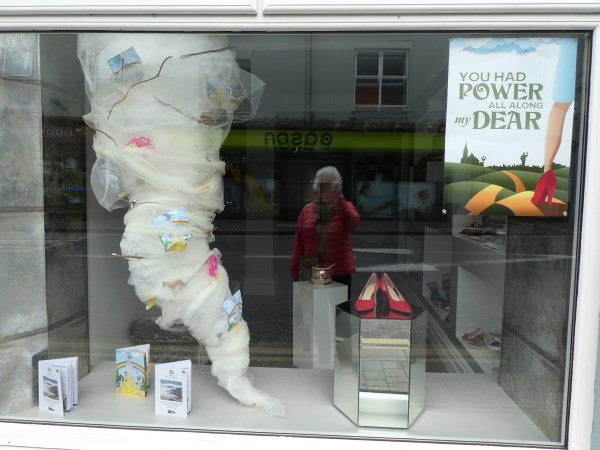 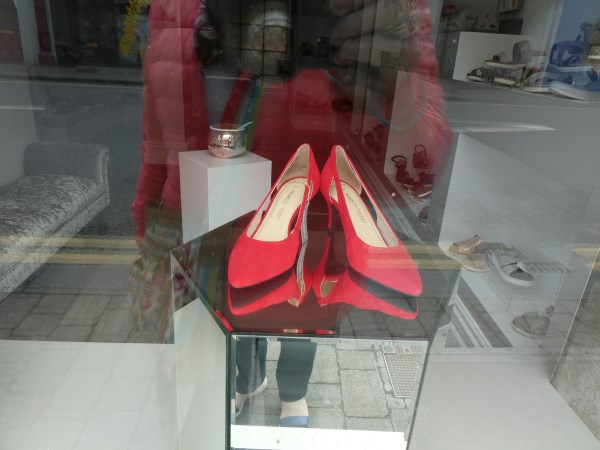 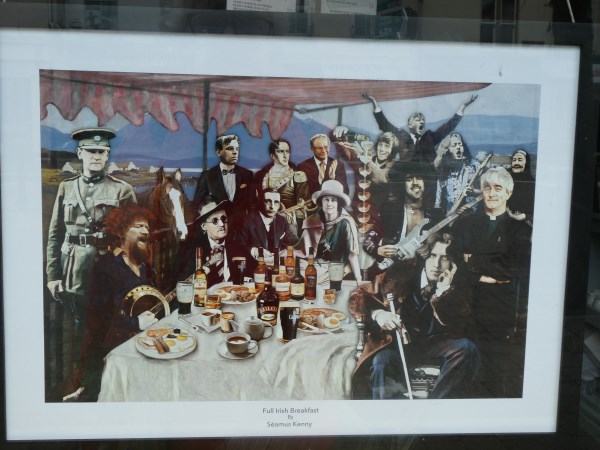 Not quite Wizard of Oz but literary all the same

I was always amazed at how she remembered everyone in Listowel even years after she left and she explained that while she never missed Listowel she said but after being gone for a while she realized she was forgetting people and she never wanted to do that so she would lay in bed at night and as she would say “go down the road into town” and go in an out of each house and draw up people’s faces in her mind and name them so that she would never forget them-and she never did.  She could name all the OConnor family down the road-Hilda, Nellie, Rita , Anthony, John, Mike and May-at least she thought that was all of them. She remembered a Sr.Frances at the convent very fondly. She once wrote an essay that she showed to her father Dan Brown and he gave her a penny as it was so good. She remembered  a Sr. Margaret who she had in 2nd class telling her she was smart like her Aunt Hannie who taught in Tipperary-( I don’t know who auntie Hannie was) She had so many little memories of things we wouldn’t think were important to remember. She remembers Margaret McMahon from Church St. telling a not appropriate joke in class and the nun hearing her. She had very clear memories of her family’s involvement in the “troubles” She and her neighbor (my uncle) Tom Pellican got many the pair of new shoes at Whelan’s (Morans’s) shoe shop-they would go into the shop and the notes would be put into the insole of the shoes for “the boys” and they would walk out and nobody knew what they were up to.

She remembers one of the Enrights from the road getting TB while he was in jail with her father Dan Browne. She talked of her father escaping from Limerick jail and nobody knowing for sure where he was at first. She talked of the Black and Tans raiding their home on a regular basis looking for her father.  One of her sisters suffered from what I assume we would call PTSD from having the Tans come and go and thrash their house and frighten them. She died still loving DeValera and hating Michael Collins. I had attempted to get her to watch the movie Michael Collins when it came out and “no way” was her answer- I did prevail and on commenting to her about “what a powerful man he was” her answer was “wouldn’t we be mad about him if he wasn’t a blue shirt”.

She could still name all the “informers” in the Listowel area-they shall remain unnamed. After the family settled in Chicago their house was a regular visiting place for the old friends from home especiailly the friends from the Republican side. They also would keep some of the footballers when they came from home to play in Chicago.

Agnes married John Broderick whose family was from Listowel also-and raised 3 lovely daughters. Dan and Nora Browne never returned to Listowel. Dan died December 30, 1955-Nora Browne died July 14, 1959. As time went on different family members did go back to visit although not very often for most of them. Agnes was to go on one of the family trips but it was discovered that her citizenship papers were not in order and by the time they would have gotten them it would have been too late to travel with the family group.  Several  years before her death she had an opportunity to go back with her daughter and son-in-law but declined citing health issues. She never saw Listowel again but always kept it close to her heart. The remains of the house they lived in is still there next to Pellicans house in Dirha.

As a final joyous note to finish her life’s story as a Listowel woman, a memorial mass was said for Agnes in St. Ambrose Catholic Church in Deerfield Beach, Florida on St.Patrick’s Day 2017 at the request of a decendent of her old neighbors in Dirha-the Pellicans. It was celebrated by Fr. Bryan Dalton the pastor of the church at the time who was from Listowel. She would have loved that.

They had a great time in Ballybunion on Sunday. Looks like a super fun event. Lots more like this planned for the summer. Take a look at

I took the below picture from that page. 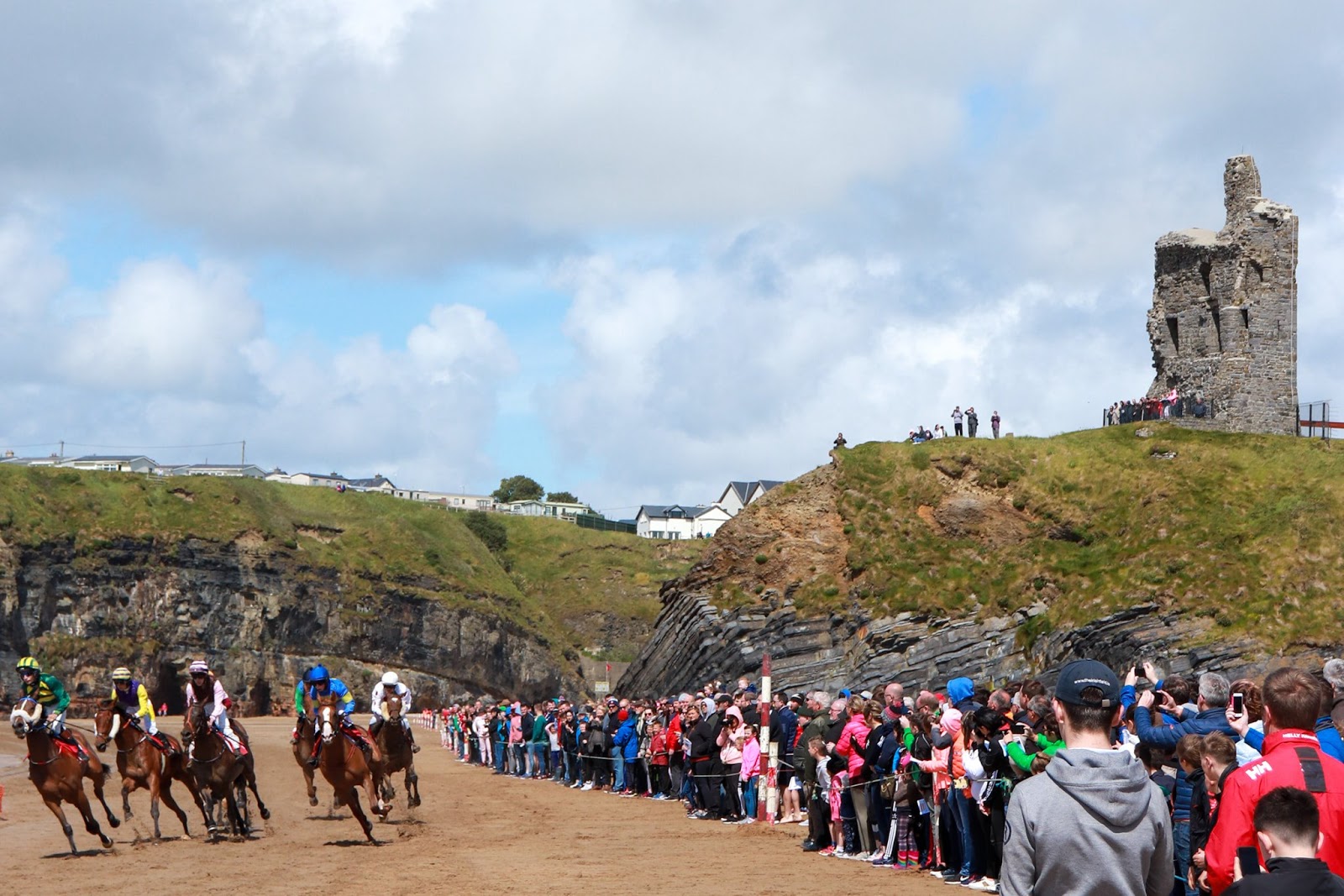 Visit of Michael D. Agnes Browne in her 105th year and the death of Anne Dillon

Flowery Listowel, U.S. Visitors and a crane in the Listowel skyline