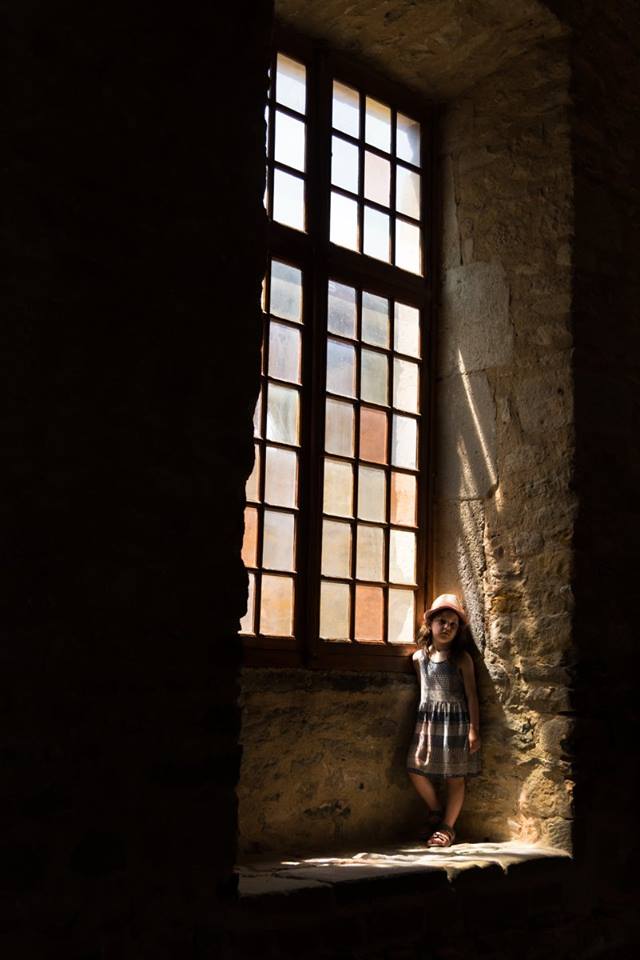 From a Shannonside Annual, Redmond O’Hanlon writes of his experience of the distinct idiom and expression of Kerry speech

The woman of the
house where I stopped to enquire told me that the people I was looking for lived
only the pelt of a stone from the road. “Mary here will carry you up to the
headland, sir, ”  she added, “but you
will have to jump the glasha.” My proferred escort was a minute barefooted
maiden of about ten summers. Looking at the wisp of femininity and remembering
my eleven and a half stone, I thought of Sinbad, the Sailor and The Old Man of
the Sea. But the glasha was still a problem. What was it at all and how did one
go about jumping glashas? I wondered as we walked on. And did the daily jumping
of such obstacles in Kerry account in any way for the ease with which the
county’s ball players rose for the high ones in Croke Park?  And then light dawned. “Glasha,” I repeated
as I walked along with the wee one, that must be the Irish glaise, a stream.
And so we came to it. I said goodbye to my guide at the headland and duly
jumped the glasha. No bother this to me in those days. A rangy leggy lad I was
then and the jumping of glashas for years to come was to be one of the
privileges of a job that brought me all over North Kerry and West Limerick. 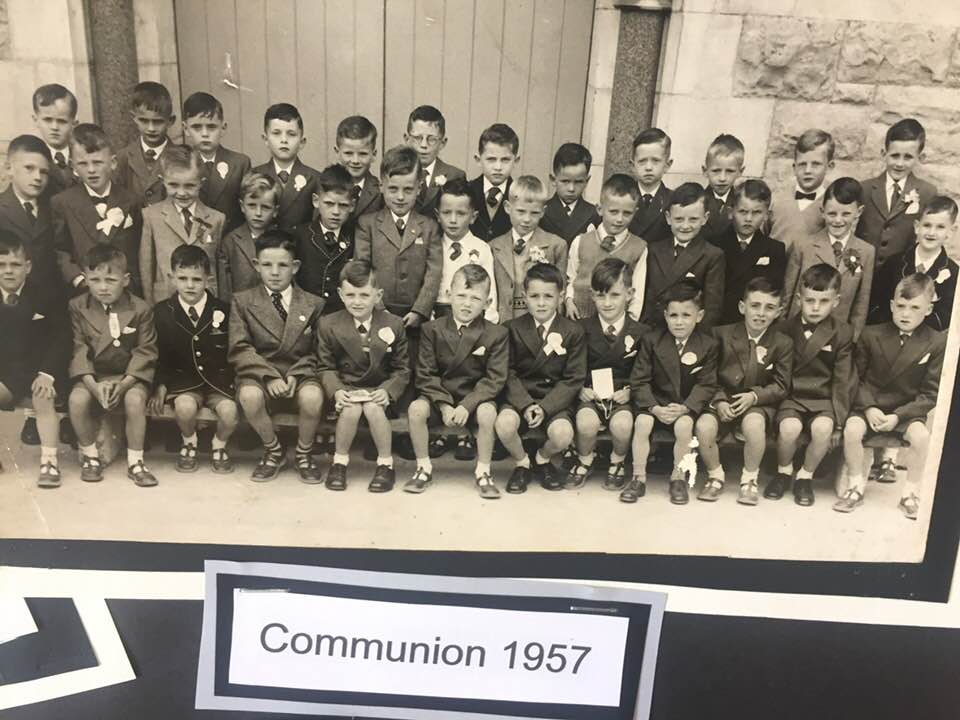 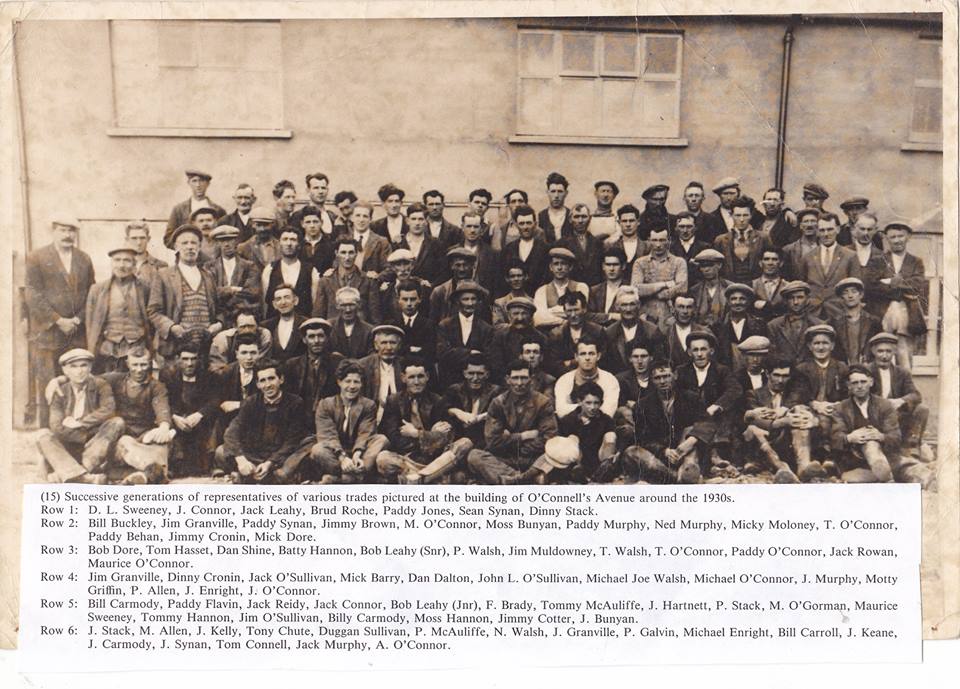 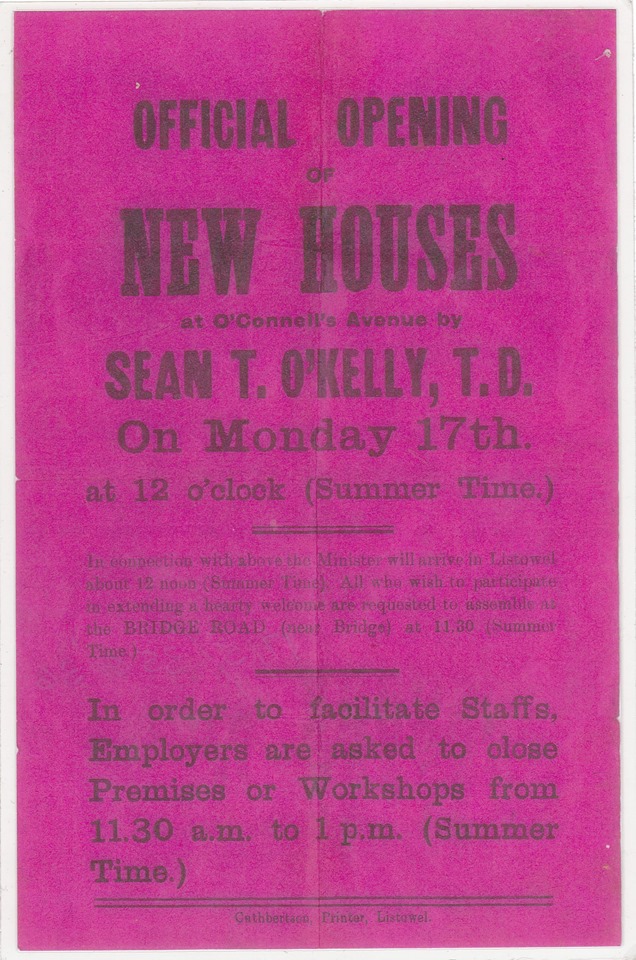 In the 10 years after our Civil War, very little was achieved, nationally, in the building of local authority housing. Around 1930, the members of, the Listowel U.D.C. were concerned with severe overcrowding in many properties and the use of many more with very poor sanitary conditions. Following a survey of the town’s housing stock, they presented their findings and sent a plan to the Department Of Local Government. In response they were informed that the Listowel Council had been granted funds for the building of 104 houses. At this time, it was to be one of the largest local authority building contracts in the country.

The contracting tender, in 1932, was won by a local building contractor, M.J. Hannon. This in itself was a great bonus to the town, as it guaranteed a substantial number of years’ work for the town’s tradesmen and laborers, with, of course, a great spin off for the town’s businesses.

Some years ago, I spoke at length, and took notes, from Mr Jim (Red) O’Sullivan of Charles Street. Jim, who had worked with the Hannon Builders since he left school, was officer manager at the time of the construction, (he is pictured in the second last row), unfortunately, with the passage of time, the notes were misplaced.  However, I can recall a number of the things which he told me. The council took soundings on a possible name. One of the early contenders, before they decided on O’Connell’s Avenue, was Eucharistic Avenue, this was on account of the Eucharistic Congress which was been held in Dublin, in the summer of that year. He also explained, that the wage bill per week was, if I remember correctly, in the region of £400. At the time, this would have been an enormous sum of money, Jim would collect the money from the bank first thing each Saturday morning, after which, he would be escorted by an armed detective back to the office. There he would make out the pay packets in readiness for paying each man, at the conclusion of the half-days work on Saturday. All the blocks for the building work were manufactured on site.

The land on which the houses were built had been purchased from Lord Listowel, prior to it being built on, it had been used as meadowing by the O’Donnell family, family butchers in Listowel. The main entrance to the houses was from Convent Street, Later a roadway was built to connect up with Upper William Street. The building of this later facilitated the erection of St Brendan’s Terrace.

The official opening was on Monday, June 17th 1935. It was presided over, by then Government Minister, Sean T. O Kelly. ( He, ten years later, in June 1945, became Ireland’s second President, replacing the outgoing Douglas Hyde).

The first residents had taken over their houses, prior to the official ceremony. In the main these were couples with young families. Today, a third generation of these families own many of these houses. Over the years there has been mass emigration from the area. However, those who remained, have contributed greatly, to the, social, cultural and sporting history of the town.

The pink photograph is of a  pamphlet which was distributed to the local businesses, asking them that they allow their employees time off, to participate in the ceremony. 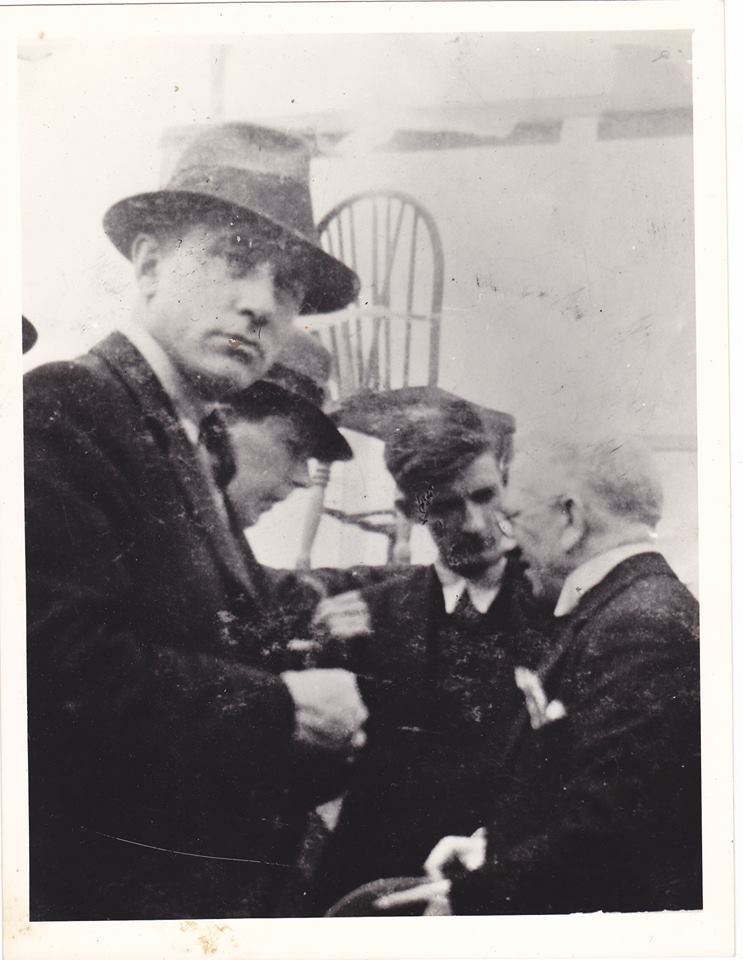 I was in Ballybunion at the weekend for this super event. John Kelliher photographed me with some of the Writers’ Week gang who were there enjoying a festival at which they didn’t have to work.

Of course I was working away on your behalf. John snapped me as I snapped another photo for Listowel Connection. I’ll bring you my report during the week as well as an account of my trip to St. John’s for Many Young men of Twenty and to the Seanchaí for the history lecture. 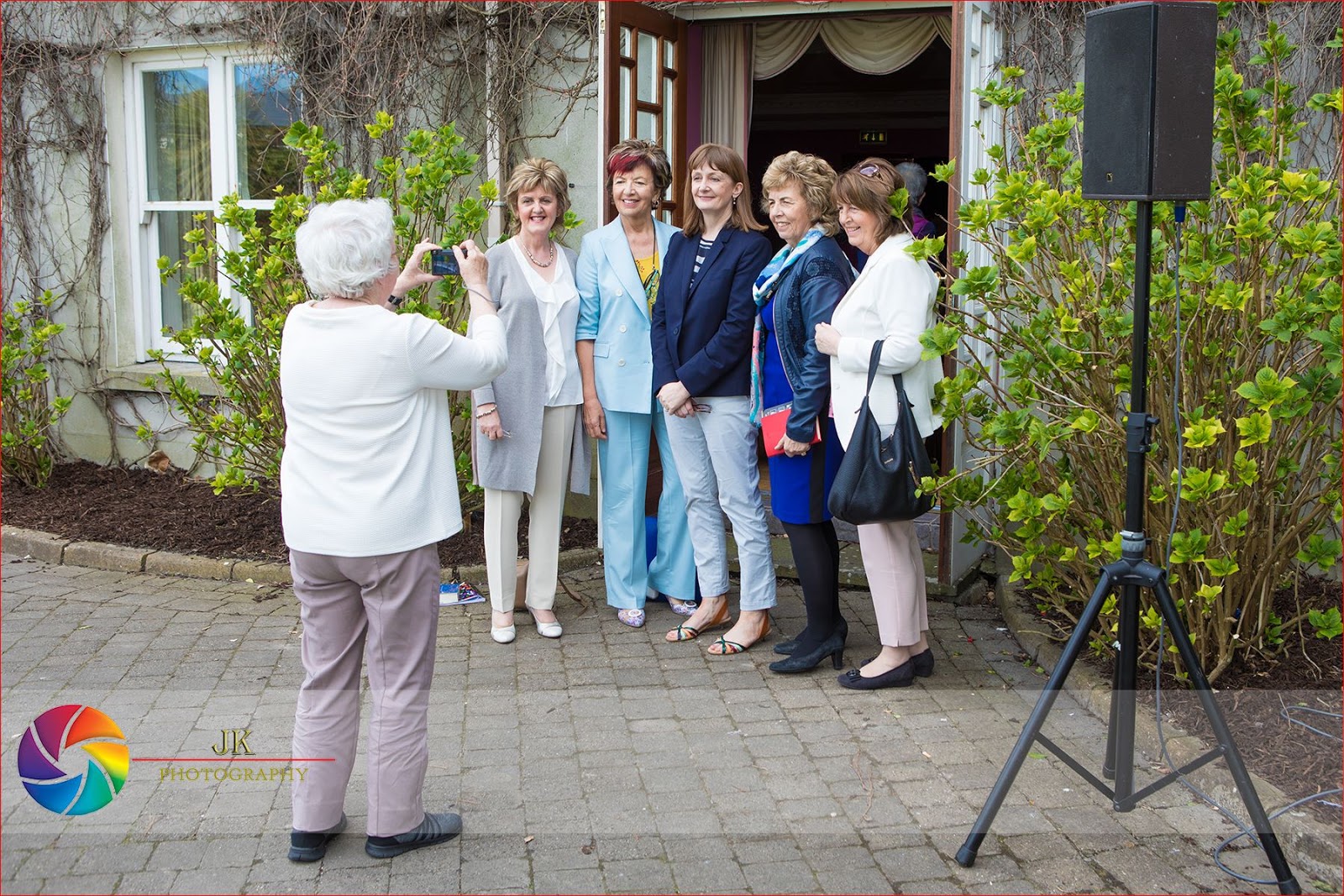 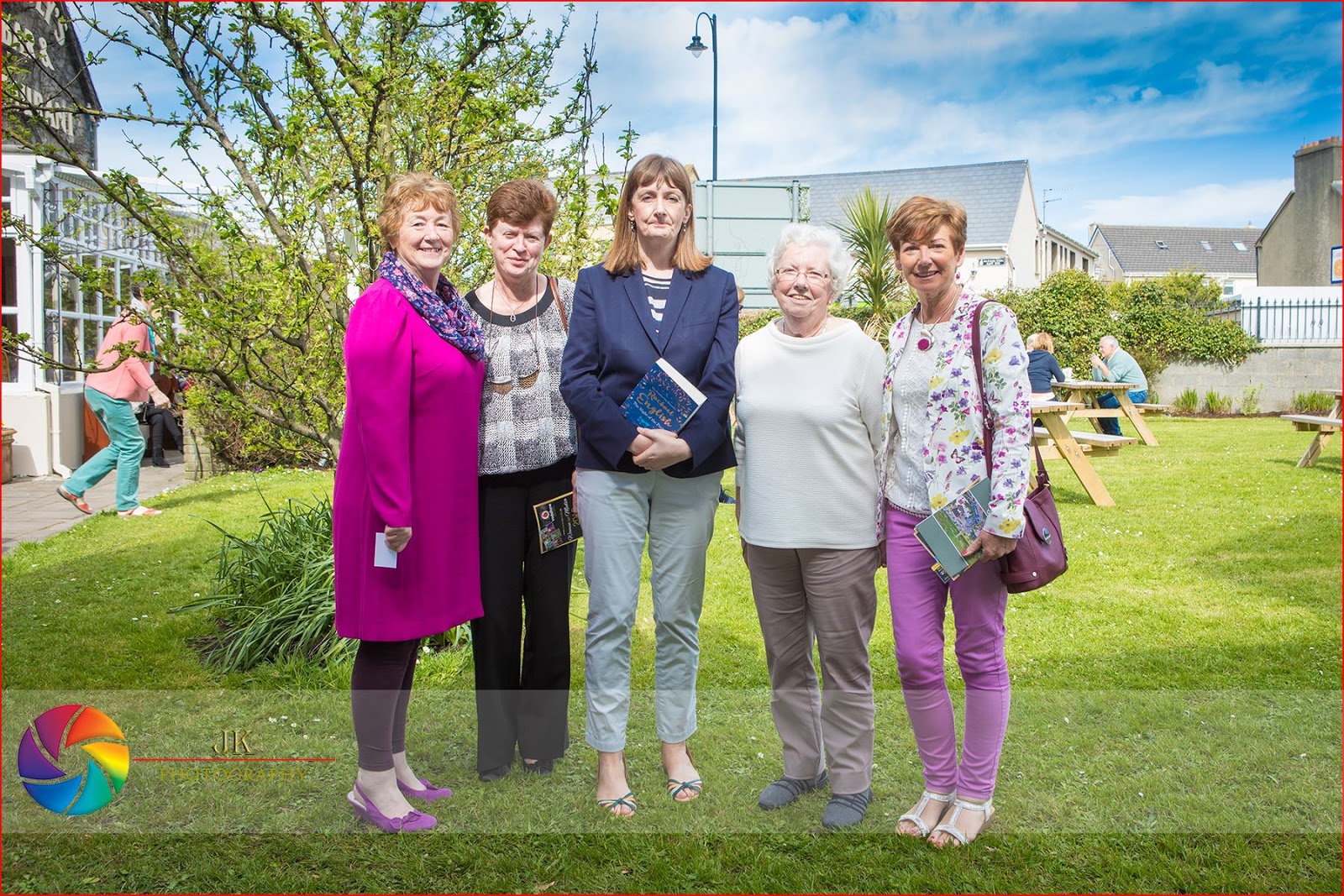