Listowel had some welcome visitors during the past week. Ben and Kathleen Naylor were on a trip to North Kerry to visit locations associated with Ben’s Gleasure ancestors. If you have forgotten about The Gleasure letters, here is the link.

Ben’s ancestor is Frank to whom all the letters were written. Unfortunately we have none of Frank’s replies but the one sided correspondence we do have is a wonderful first person account of one family’s life in Listowel in the first half of the 20th century. 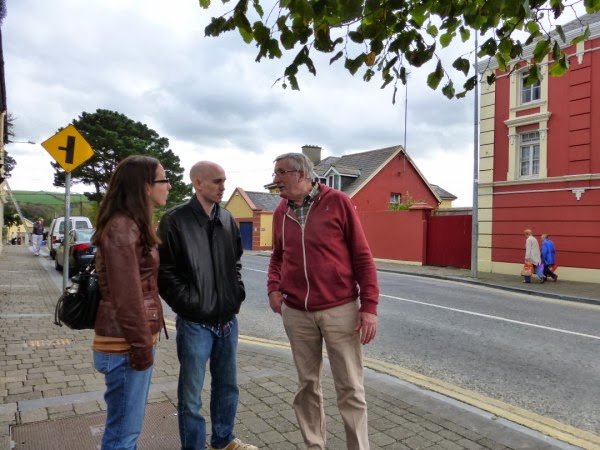 Vincent explains why this corner of town was known locally as The Custom Gap.

If you are following my tales of the Gleasure family and descendants, you will remember a reference in a previous post to one of May Gleasure’s letters in which she referred to her father’s illness and how his life was saved by the intervention of one Dr. Michael O’Connor. The good doctor was George Gleasure’s neighbour in The Square. He lived in the house now occupied by The Seanchaí. 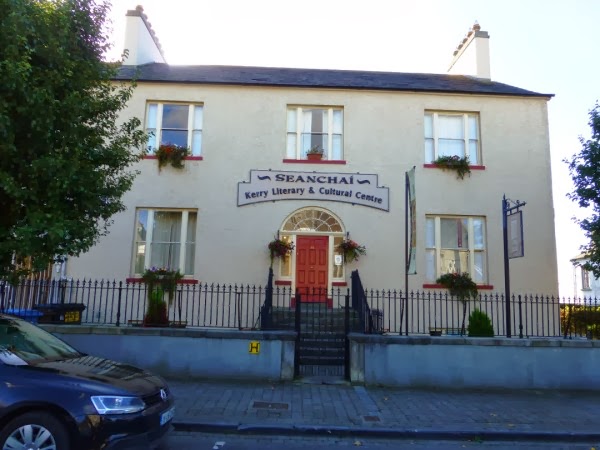 After I had posted this story I was contacted by  Geraldine O’Sullivan who is a granddaughter of Dr. O’Connor. She sent me his obituary from the Kerryman and the above photo. The newspaper cutting was very blurry so I contacted Michael Lynch the archivist in the County library and he sent me a slightly better scan but of the whole page of the newspaper from August 25 1951.

Then the story took another twist when Eitan Elazar, another grandchild of Dr. O’Connor sent me a typed up version of the obituary and a copy of the mortuary card. 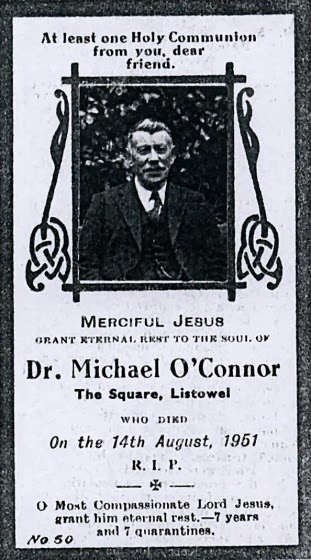 There has
passed to his eternal reward one of North Kerry’s most gentle and unassuming
sons in the person of Dr. Michael O’Connor who was M.O.H. for Listowel and
district for the past thirty-five years. He was born at Derrindaffe, Duagh and
educated at St. Michael’s College Listowel, and at the National University,
Dublin, where he took his M.D. degree in 1906. It was in that year he started
his professional career in Listowel and from then on he had the interests of
that town very closely at heart. Right through his entire life he had the
greatest consideration for the poor and needy to whom he gave of his best
without thought of gratitude or money. Apart from his medical life, he took a
leading part in the affairs of the town and was foremost in anything that
furthered the interest of Listowel. In 1918, a special branch of the Town
Tenants’ League was formed to take over portion of Lord Listowel’s estate by
negotiation for the benefit of the landless poor of the town. These negotiations
failed and with the approval of town and country, the lands known as the Lawn
and the Major’s Field were forcibly entered and ploughed up. This action led to
the arrest of Dr. O’Connor  and the members of the special committee, who
were charged and sentenced to a term of imprisonment in Cork Co. Jail. Later,
Lord Listowel decided to give the land to the people and Dr. O’Connor and
another townsman were appointed trustees. Thus by his action, plots of land
were secured for cultivation by the people and particularly the poor. He was
founder member of Sinn Fein in North Kerry and devoted much of his professional
time organizing the I.R.A and there was not a town or village in North Kerry
but had its Sinn Fein Club, due to his untiring efforts and hard work. The
first Dáil Éireann Loan was organized by him in North Kerry. As a counterblast
to the Belfast Pogrom in 1920, he took a leading part in the Belfast Boycott
and had it so perfected that not a pennyworth of Belfast or English goods
entered Listowel. Naturally, all these incidents marked him as a man to reckon
with, so the British Government decided to make its move. On the Monday
following “Bloody Sunday” in Dublin the doctor and six of his
associates were arrested and taken to Listowel Jail, later being transferred to
Kilworth Camp, Cork Co. Jail and eventually Ballykinlar, Co. Down, where they
remained until the General Amnesty in December, 1921. During his internment
(which incidentally lasted thirteen months) his residence was taken over by the
British military and his wife and young family were forced to seek shelter
among friends. After the “split” he became pro-Treaty, but still his
sacrifices for the country were not over. Coming from Tralee one evening he was
forcibly removed from his car and compelled to walk across the mountains to
Castleisland spending one night in the open country , by the side of a fence,
and was later held prisoner for several days. In later years he took little
active part in politics. With his death the nation has lost a noble son and the
poor a kind friend. May the sod rest lightly on him who spent his life doing
good to others and may God, the giver of life, have mercy on his soul. 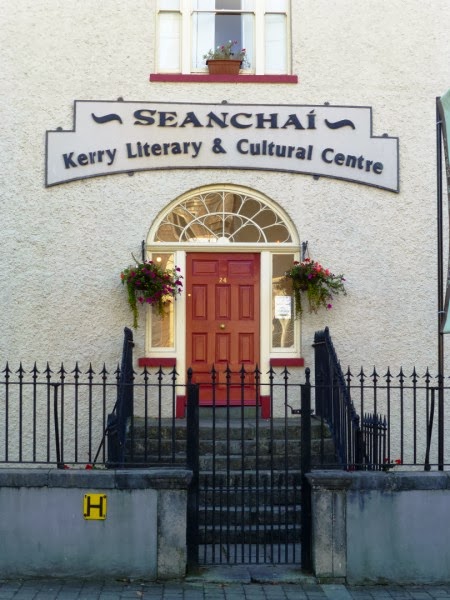 “Our memories of Listowel were from many holidays spent down at the house at 24 the Square.

Vivid memories were of the market days in the square waking up to the mooing of cows, the hee haws of donkeys and the bleating of sheep.

many many outings to Ballybunion during the summer. visits to Roberts the sweet shop at the corner of the Square

and freshly baked apple tarts from Lynch’s bakery across the square and playing in the grounds of the Castle.

Michael O’Connor jr was a very good artist who was particularly interested in Celtic manuscripts. I include one of his works,

the breast plate of St Patrick. “ 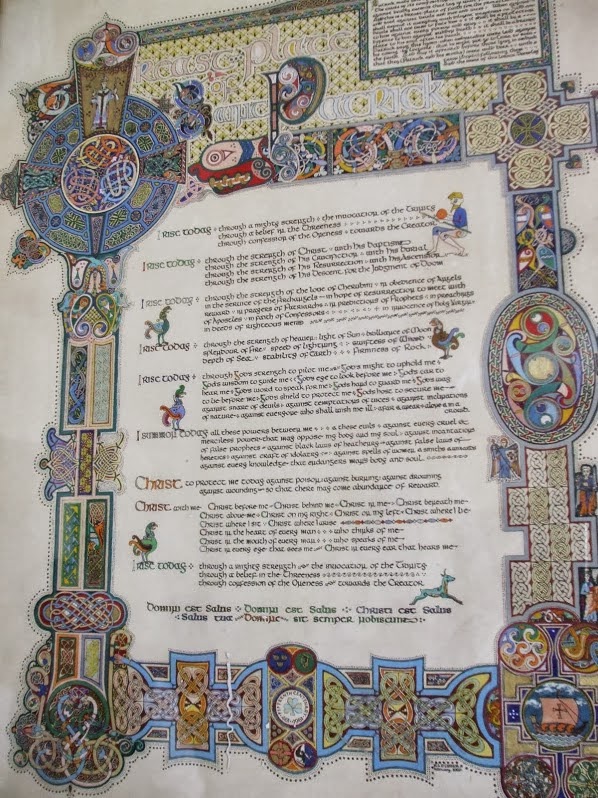 Eitan sent me some more family photographs which I will post tomorrow.