The Bend for Home

This is the road out of town for Tralee or Limerick. The Millennium arch is on the left and the cars are on the Big Bridge. 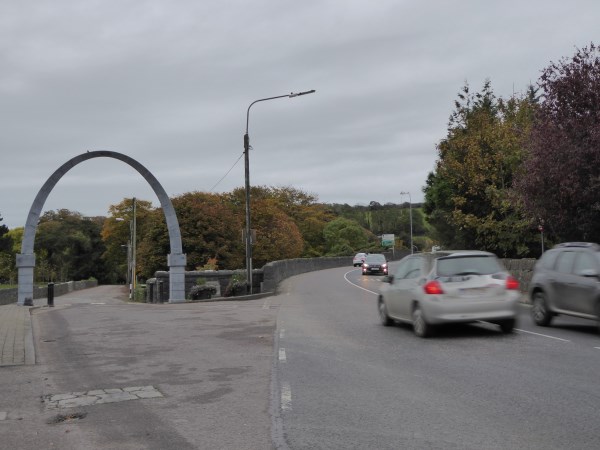 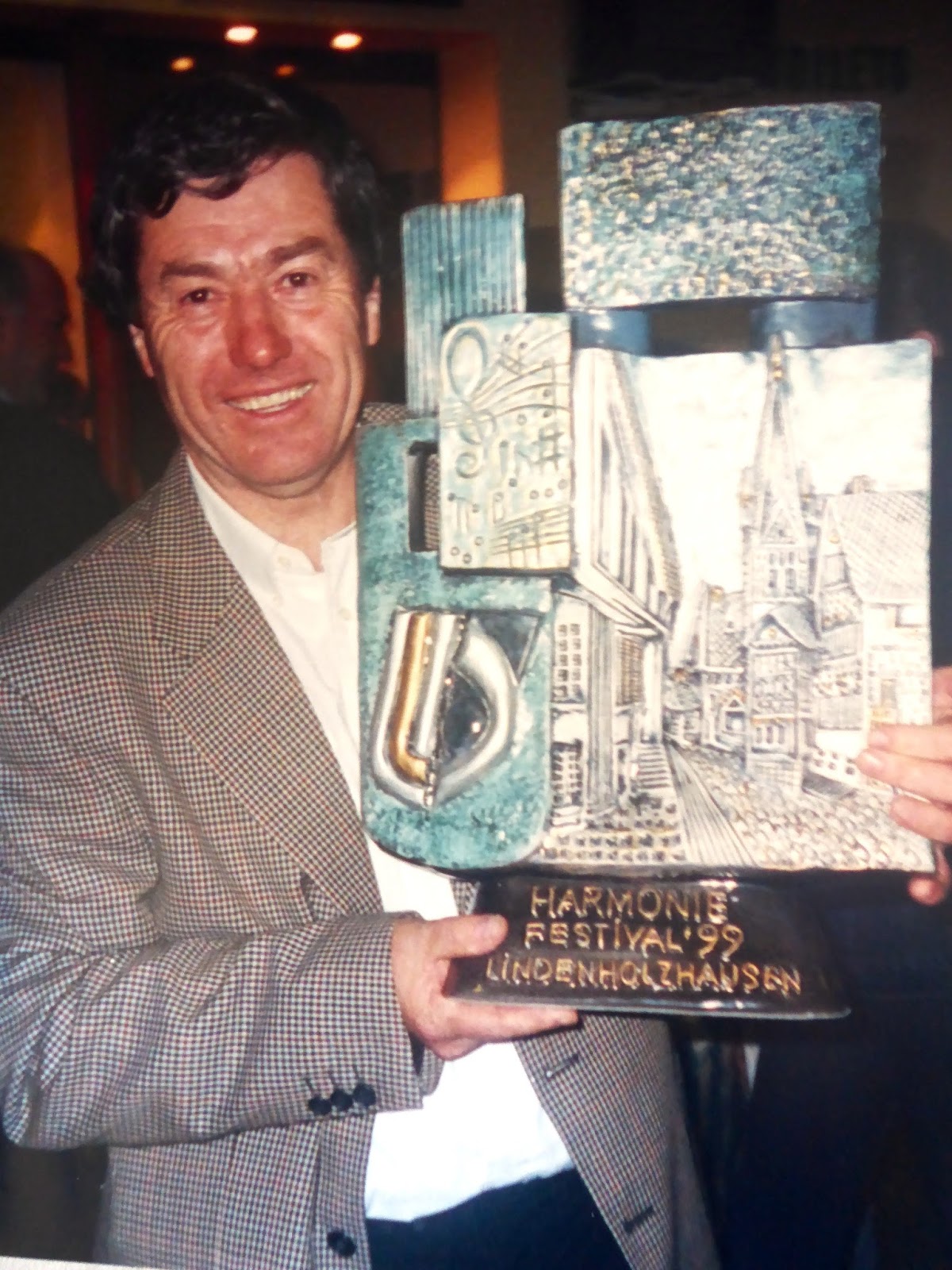 The high point of Jimmy Hickey’s career as a dancer and dancing teacher was the winning of this magnificent trophy in 1999.

Here is the story

The HARMONIE FESTIVAL is a festival of
peace, friendship and international understanding.

It takes
place in Germany every six years. There are competitions for traditional
singing, dancing and music. Participation is by invitation only. To this day the
organisers are inviting Jimmy to come back, despite receiving hundreds of
applications from other Irish dancing schools to participate. I think he might
be thinking of having one last go at it. I hope he does. The next Harmonie is
in 2017. 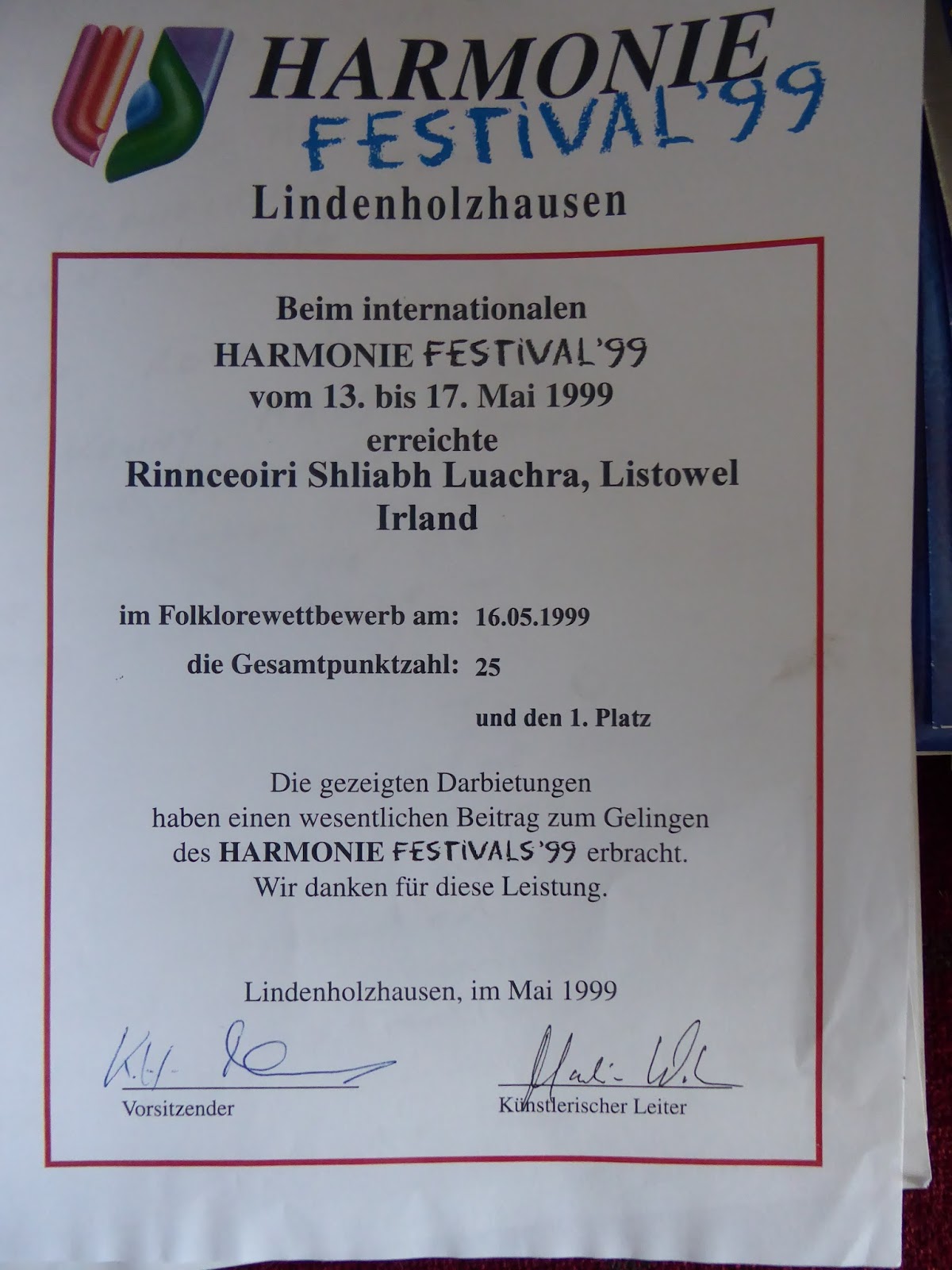 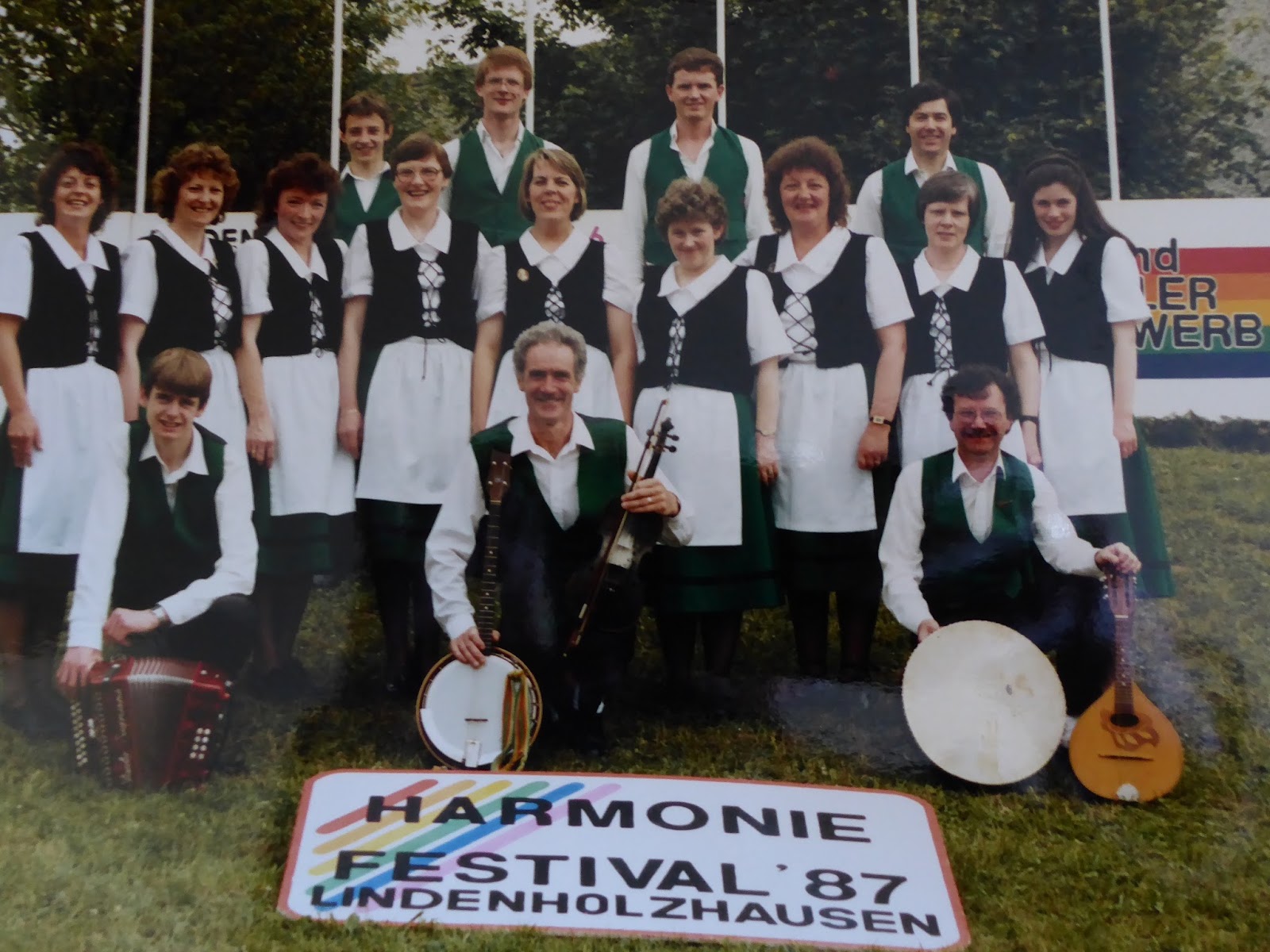 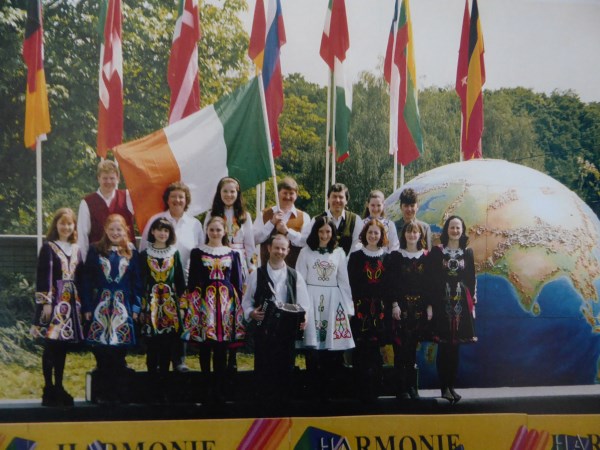 42 nations from all over the world each with their own
cultural dance. 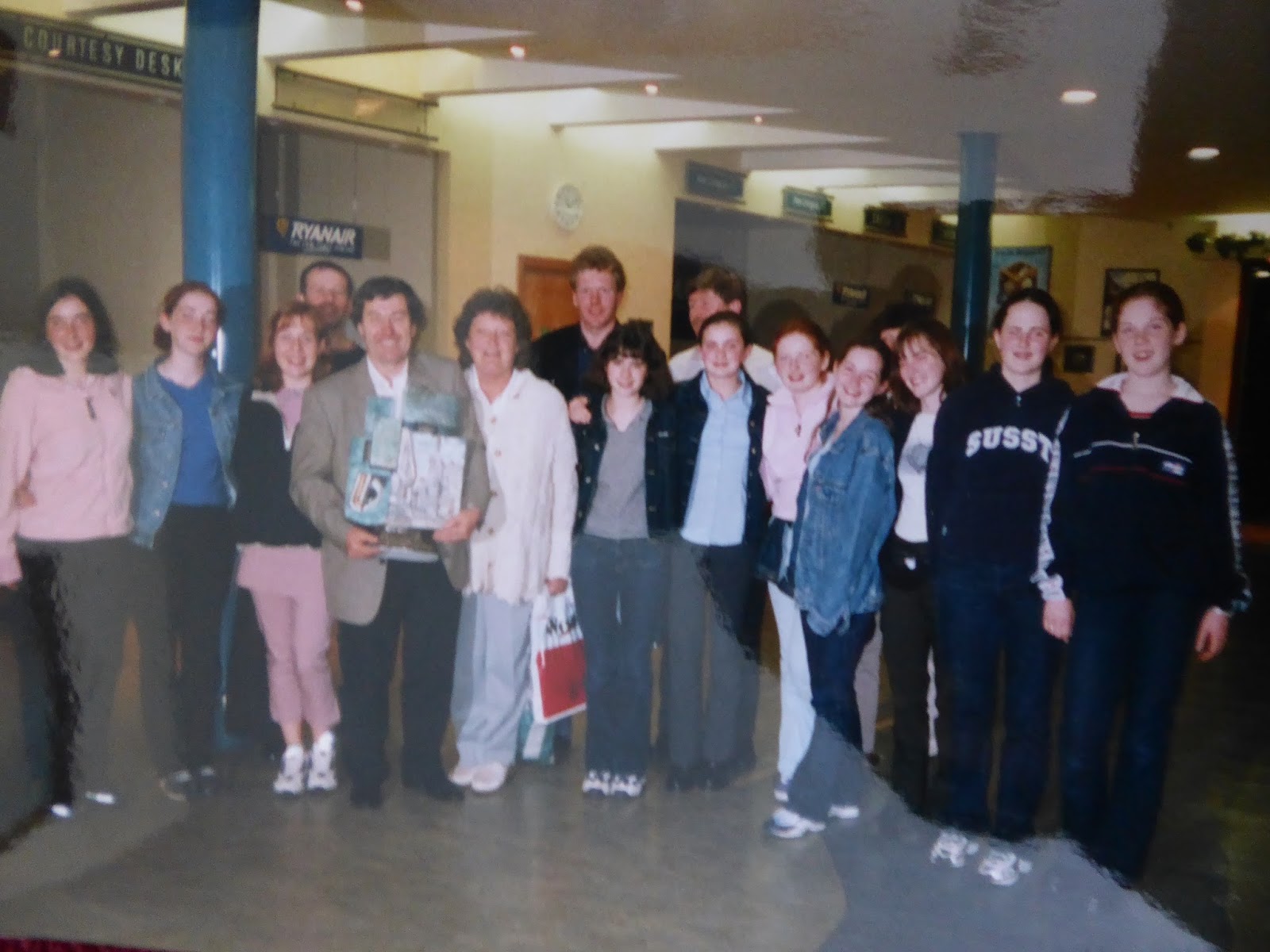 Arriving back in Shannon with the trophy.

When the Kerry dancers went
first there was no competition, just exhibition and just five countries took part. When it developed into a competition Jimmy
Hickey’s dancers took first prize in 1999 and 2005. This was a huge honour,
which deserved wider recognition at home. They represented their country in an
international competition, competing against 42 other countries and came home with this unique and valuable trophy.
It depicts the town, Lindenholzhausen, where the competition took place. It has the symbol of the
competition and symbols representing the traditions of music and dance that
were celebrated.  Each dance group contributed one judge to the panel, so they
were judged by an international jury of their peers.

could not stand his conduct,  so he took off his coat, fought him

fearlessly and well, and beat him all along the line. He hunted him

from every public Board in the county, and from the Bench he disgraced

him, until finally he hunted him to his dishonoured grave, he having

Again they found Mr. Flavin , when there was confusion in the Irish Party, he proved himself loyal

to the authority of the chair. They found him in Meath assisting

another honest Irishman, Michael Davitt. (Cheers). They all remembered

the testimony of Michl. Davitt to honest Michael Flavin—that if he had

the giving away of his seat in the morning, the one man he would

select as a fearless fighter, as an honest man, was Michael Joseph

Fourteen years ago Mr. Flavin was selected by a

Convention In North Kerry, and he got a mandate then from this

House of Commons, and Rev. Speaker asked them had he not proved

himself an honest man since then, practically attending to his duties,

He had given the

best years of his life in the service of his country, regardless of

the consequence to his health. They found him once brought to death’s

door by the strife and turmoil of the battle, and now he would ask

London town?—(cries of of “Never”)—a man they had never heard in

politics up to the present time, and who heard of now, Rev. Chairman

had no doubt, for a sinister purpose. (“BOO for Neville Stack.”) They

were passing through a critical crisis, perhaps one of the most

critical that had ever arisen in their country’s history. Home Rule,

the desire of every Irishman, was now within measurable distance of

them. The Cabinet Ministers were proclaiming from the platforms all

through England that if returned to power they had committed

themselves to the granting of a full measure of Home Rule to Ireland.

While the hands of the Irish people were stretched out for

that long denied measure of justice to this country, the right of

Irishmen to make their own laws had in their own Parliament,  Joe

Chamberlain issuing his manifesto the other day to the electors of

Birmingham, appealing to their prejudices as Englishmen, not to vote

for the Liberals, because if they were returned to power they would

give Home Rule to Ireland. (Cries of “Shame.”) While their hands were

stretched out, they had the Unionists of Ireland subscribing twenty

thousand pounds for the purpose of scattering foul literature and to

go across to villify their country. They had seen where the Tories had

Ireland, and Rev. Chairman had no doubt that this Mr. Thos. Neville

Stack was there for that purpose.

He was supposed to contest that

division of North Kerry. He did not do it with a hope of winning,

unless he was an unmitigated fool, because he had as much chance of

winning as Rev. Chairman’s dog, Macnab. (Cheers and laughter). But if

by any chance he was returned, what would that mean? It would mean one

more voice in the wilderness, away from the Irish Party in a position

to do no good, but a lot of mischief. (Cheers).

He would give them an

idea of what a humbug this gentleman was. He had gone to Mr. Redmond

and had stated he was willing to submit himself to the Convention. He

had not turned up, because he knew he would not get a man to propose

him, and if he did he would not get a seconder. (Cheers). Then he

issued his manifesto telling Mr. Redmond that the Convention would be

packed, and that it was a bogus one—which was a lie—and that he would

go forward and fight as an independent Nationalist “morryeah,” laughed

Rev. Chairman, amidst cheers and laughter. He was to his (Rev.

Chairman’s) mind an independent humbug, and when the fight was over

and the battle won, and he thought he could trust the sons of the

patriotic fathers in North Kerry, the first district in Ireland that

struck a blow for Home Rule and the extinction of landlordism in 1872;

when the day came for the counting of the votes, that they would prove

themselves worthy sons of those patriotic fathers, and give to this

have the hardihood of entering for the North Kerry “Cup.” (Loud and

Mr. Flavin, who next addressed the meeting and was received with

applause, expressed his confidence in the support he would get if Mr.

Neville Stack had the impudence to force the electors. He (Mr. Flavin)

had no doubt about winning, but one he would like to have made clear,

and that was on the day of the polling, many of his supporters might

say, “Well what is the use voting  he is bound to win easily, and

voting won’t make any difference.” Well they should no give way to

such apathy, but  come up and record their votes  so that factionism

for all time should be  blotted off the map of at leaat North Kerry.

A warm vote of thanks was passed to the Rev. Chairman to which he 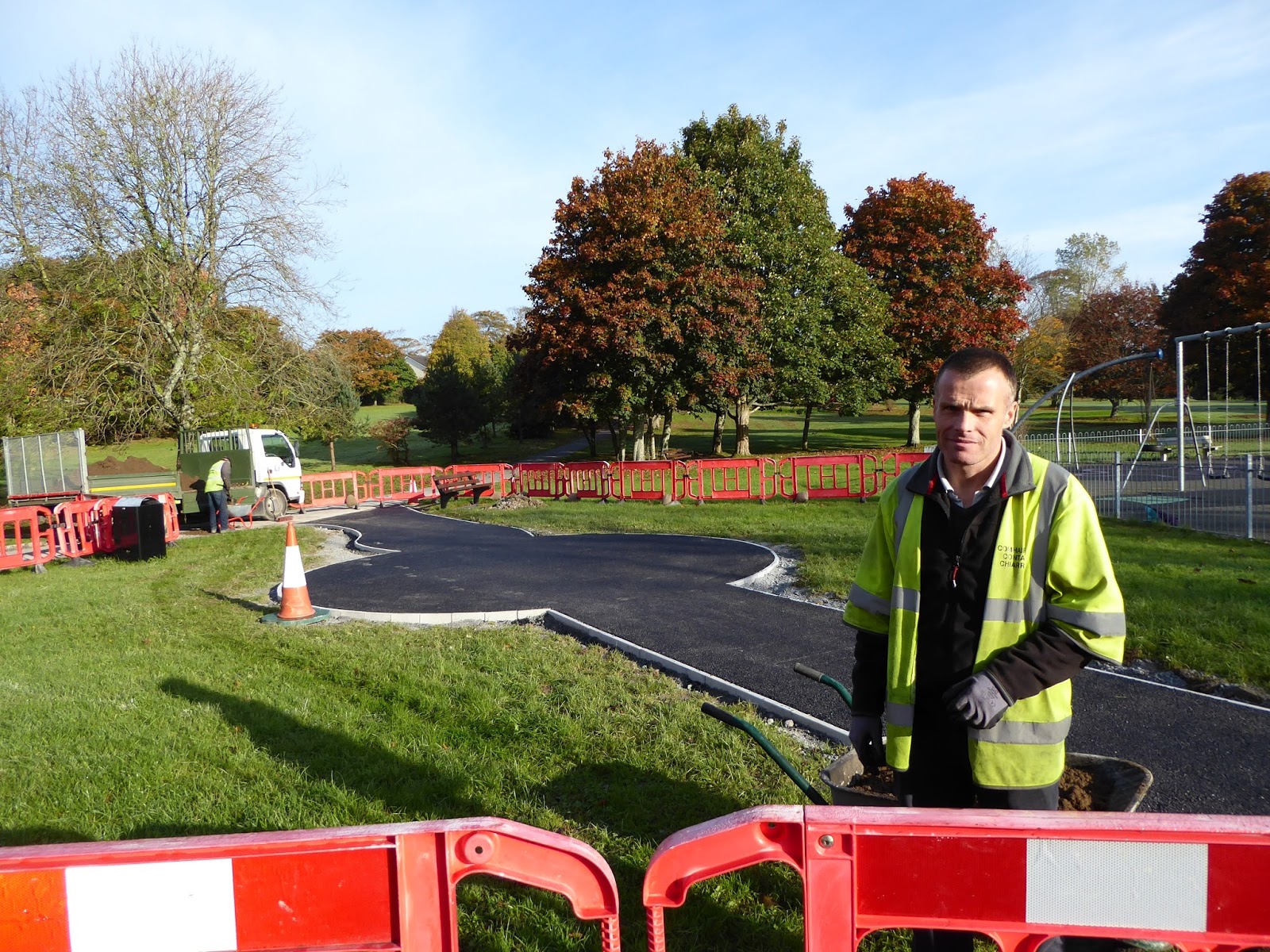 David Toomey told me all about this when I met him at work in the park last week. The tarmac bit is in the shape of a Tara Brooch. It’s going to have commemorative plaques of the 1916 signatories in the circle of the brooch. All round the edge will be two rows of box hedge in different colours of green. It looks promising. I’ll keep you updated as it takes shape. 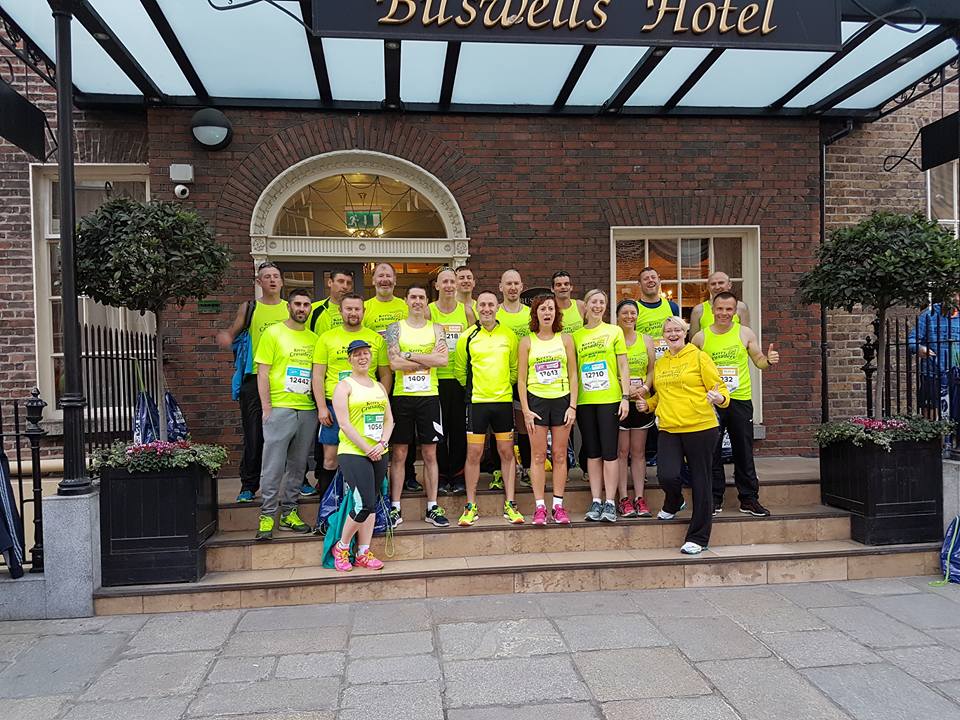 Kerry Crusaders were well represented at the Dublin Marathon this year. (photo:Tommy Commane)

This year too a special medal to acknowledge their participation in 25 marathons was presented to the Kerr family. They run with their son Aaron who uses a wheelchair. Two Listowel sisters, Rochelle and Tena Griffin, are part of the team of people who help them push the chair for some of the way 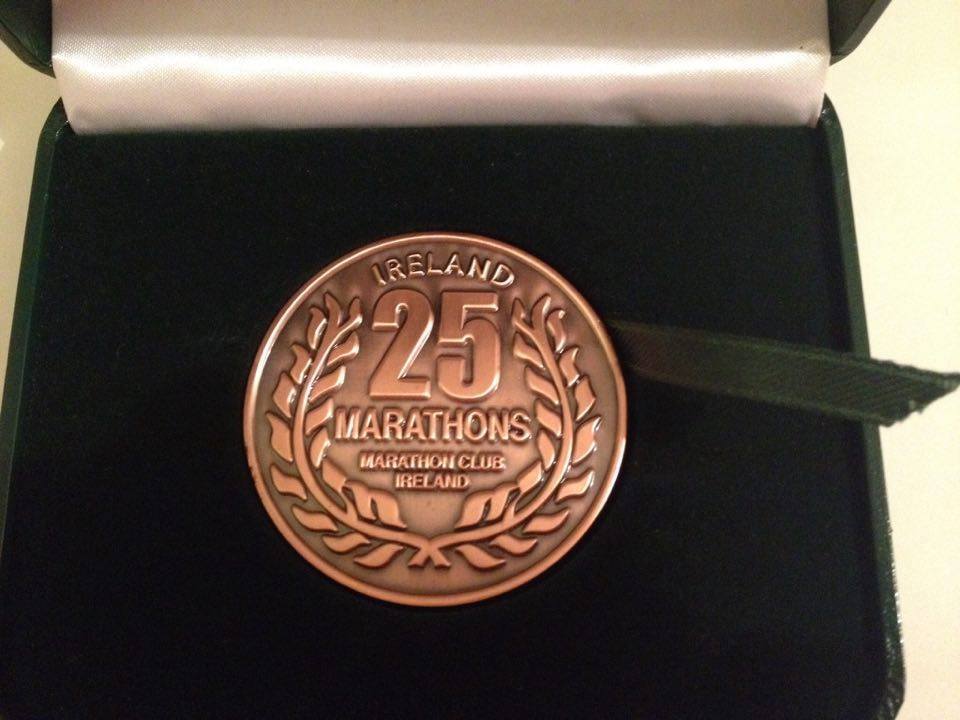 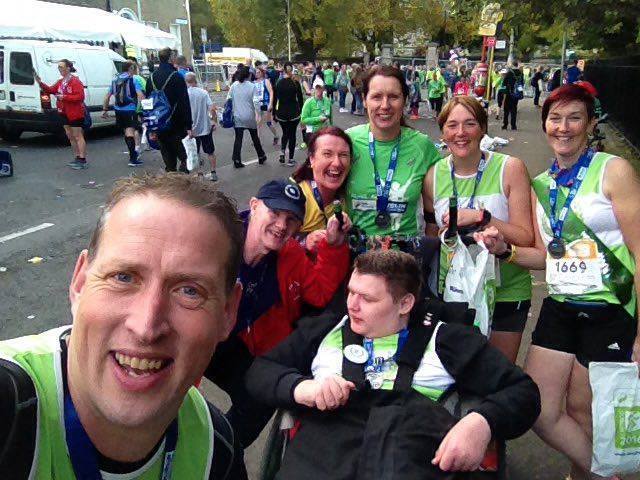 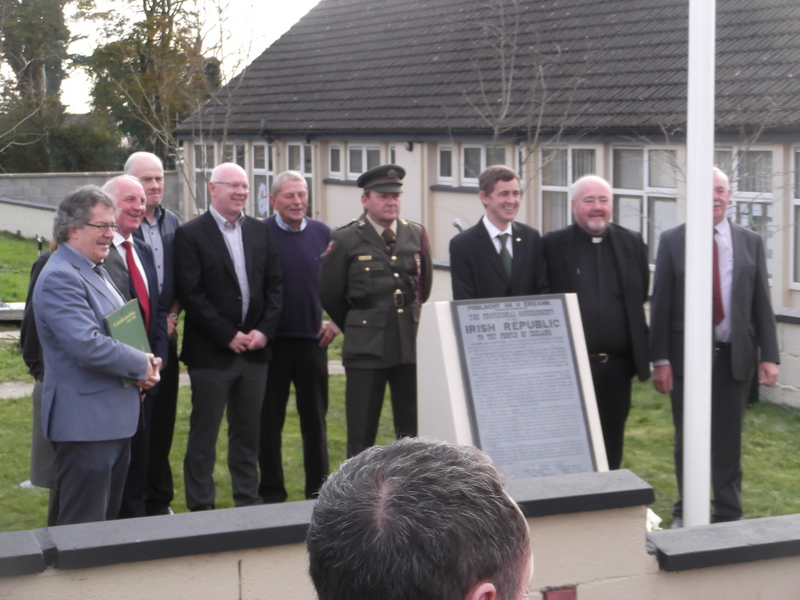