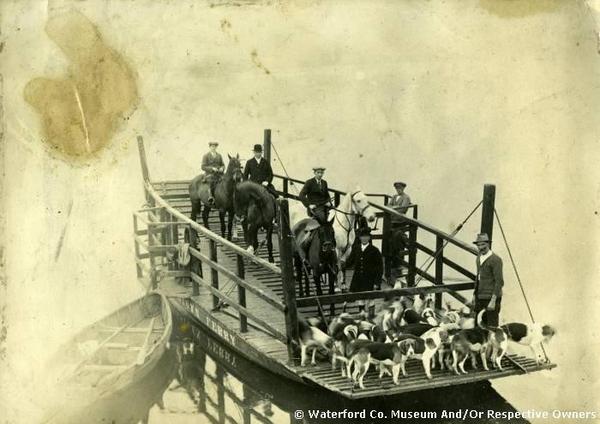 To celebrate the start of the hunting season, I am posting this really unusual photograph of the Waterford Hunt on the Villierstown ferry in 1928.

An update on the fascinating story of the Irish Orphan Girls  comes from Kay Caball. Kay is making a study of the Listowel girls and where they went and she can elaborate on what Karen Semken wrote.

“The Margaret Stack that Karen mentions was from Ennistymon and her picture (attached) is included in the splendid new book – Atlas of the Great Irish Famine.   The Listowel Stacks were Margaret Stack of Kiltomey, who is listed to travel on the Thomas Arbuthnot in the Minutes of Board of  Guardians 11 September 1849 but she is not listed as having arrived on the Thomas Arbuthnot.   There is also a Mary Stack, Kilmore  listed to travel on the Tippoo Saib –  Minutes of Listowel Board of Guardians 7th March 1850 and she is also listed on arrivals on 29th July 1850, her parents are listed as both dead.”


“Karen says ‘Mary Griffin arrived on the Thomas Arbuthnot, not the Tippoo Saib’    Karen is mixed up there and I don’t blame her as she may not be familiar with our geography and also the girls were not great at the reading or writing and when they told the Australian officials where they came from, it often made absolutely no sense with their Kerry accents.   I have the arrival sheets for both sets of Ships.  The Mary Griffin who arrived on the Thomas Arbuthnot was from Dingle. A ‘Mary Griffin‘ was chosen to go on the Tippoo Saib by the Inspector and is listed as such in the minutes of the Board of Guardians.  There is also a Bridget Griffin listed on the same sheet.  None of these names have addresses at that point.  When the Tippoo Saib arrived there was no sign of any Mary Griffin and Bridget Griffin is listed as being from ‘Stow’.    So it would be very hard for Karen to understand – if you say it yourself Mary, in Kerry speak -“Shtow” in other words is Listowel!” 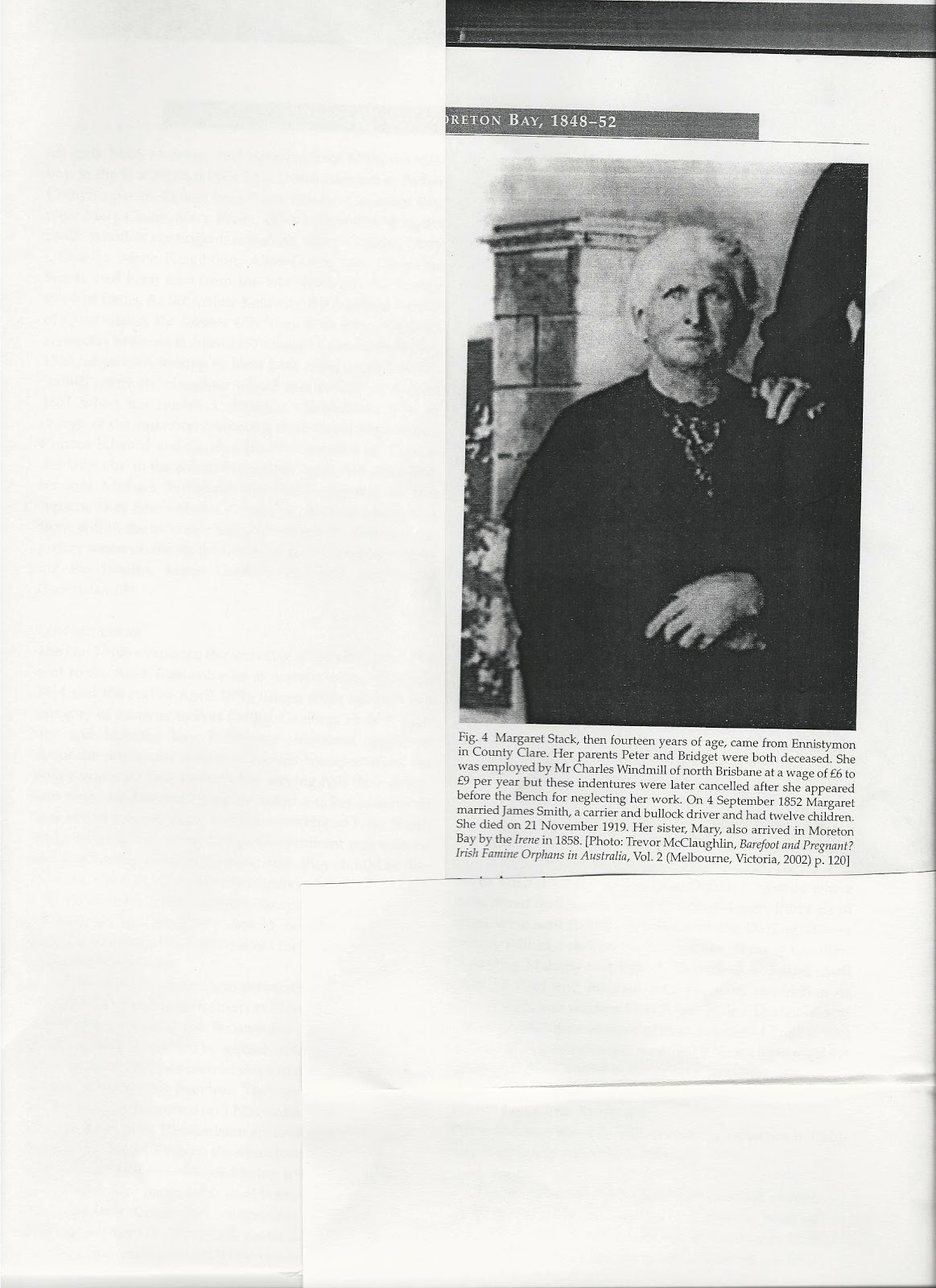 More from our correspondent from The London Standard of 1880

“Once he got
to Cahirciveen, the correspondent travelled with Father Brosnan PP, and saw the
poverty that existed in the locality.
Father Brosnan contended that Poor Law relief was of no value to them,
as it stripped them of a portion of their independence and dignity.

It was a
Fair Day on the day of his arrival at Cahirciveen, and Fr Brosnan took the
opportunity to introduce him to many of the local farmers in attendance at the
fair.  Their issues were mostly to do
with fairness of rentals (rents bearing no relationship to the actual valuation
of the land), penalty raises of rent for land improvements, and the need for security
of tenure for their farms.  Having
listened to a few case histories, a farmer piped up: “Me case, your reverence,
happened 16 years ago”, to which Fr Brosnan replied “Ah get out with you.  We can’t listen to stories 16 years back”.

His
conclusion was that many Kerry tenants were rack-rented, particularly on
estates held by middlemen (and most particularly those under Trinity
College).  The indebtedness of tenant
farmers had a knock-on effect on the local economy, through debt owed to
shopkeepers and other providers.

He also
pointed to the good work being done of some estates to promote good farm
husbandry, and the development of diverse kitchen gardens, particularly on the
estates of Lords Lansdowne and Kenmare.
This was a theme he expanded on in a second article, in the Evening Post
on 27 November 1880, with particular reference to improvements wrought by
landlords such as William T Crosbie (Ardfert) and Pierce Mahony (Dromore).  The landlord view had been that a great many
of the problems faced in relation to land tenure were related to the nature of
subdivision of plots of land to unsustainably low acreages.” 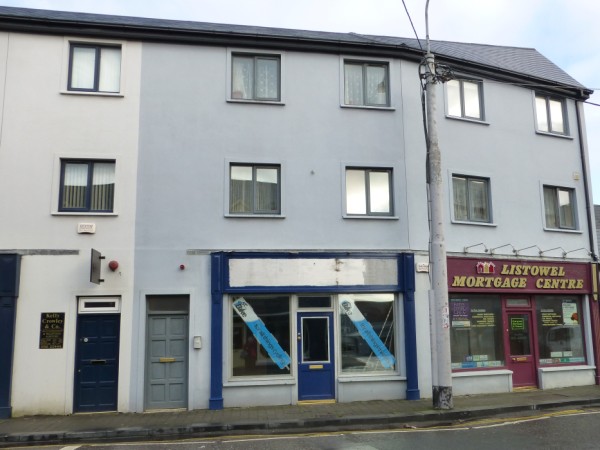 A new bike shop is about to open in the premises where the Polish shop traded up to recently. 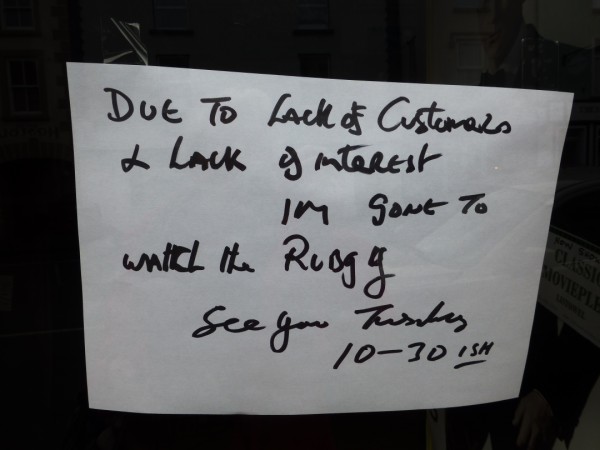 This sign on Jim Halpin’s door was giving folks a  chuckle at the weekend. 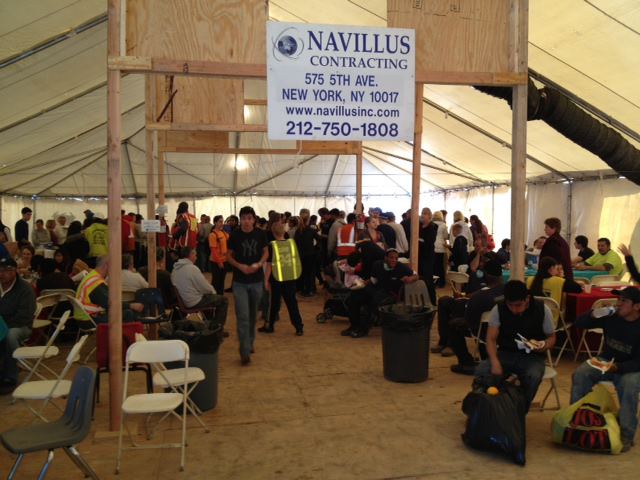 There are many with a Listowel connection who work for this huge New York construction company. This is a photo of the relief tent they have constructed where they provide food and shelter for people made homeless by the superstorm, Sandy.