In Farran Wood, an unidentified nun and the Convent Primary Band and John B. on Bob Boland 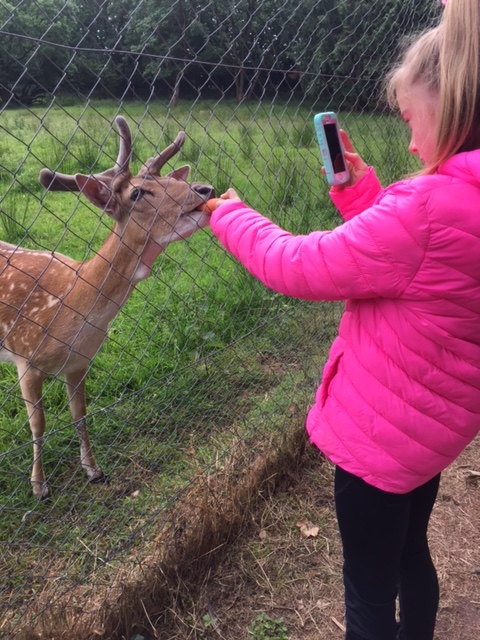 In Farran Wood in Co. Cork, Aisling Darby lures a young deer with a carrot so that she can get a close up. 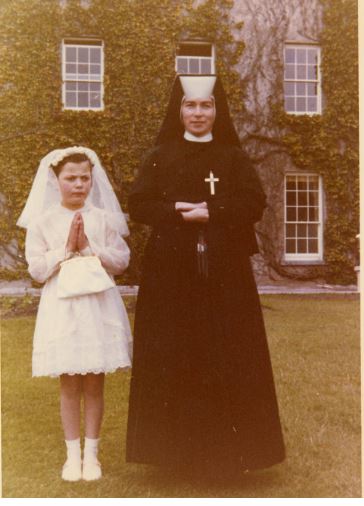 The photo was taken in the convent garden some years ago. The man who sent it doesn’t know either of the subjects. 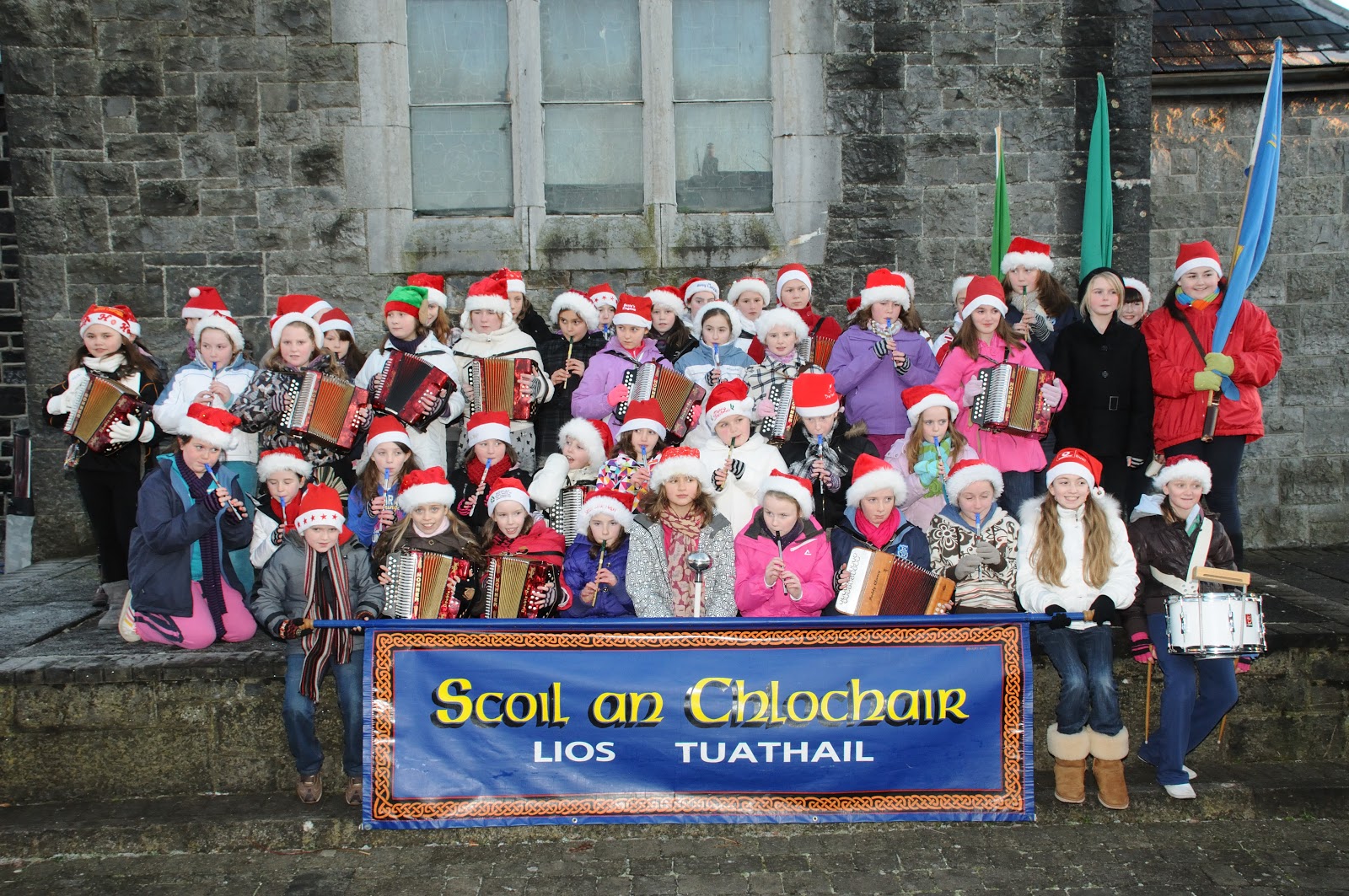 John B. Keane on Bob Boland

John B. Keane wrote a regular column in The Limerick Leader. He wrote often of lesser known local writers. It is clear that John B. saw great merit in Boland’s writing as you will see in the following essay from the Limerick Leader archive.

LAST week we dealt briefly with the life and works of the late George Fitzmaurice. This week we will look at the works and life of the late Robert Leslie Boland of Farnstack, Lisselton.

Before we do, however, I would like to clear up a misunderstanding concerning the religion of George Fitzmaurice. George was born into the Protestantism of the Church of Ireland, and was not a Catholic, as two of my readers would have me believe.

George’s father was a parson. His mother was a Winifred O’Connor who worked as a maid in the Fitzmaurice household at Kilcara, Duagh. The marriage took place before the Ne Temere decree which meant that the sons were brought up in the father’s faith and the daughters in the mother’s faith. Wiffred O’Connor, of course was a Catholic.

Robert Lee Boland, on the other hand, was a Catholic. He was born in the Farnstack farmhouse in 1888 where his son Daniel continues the tradition of farming. The Bolands of Farnstack distinguished themselves in almost every aspect of Irish life. Bob was educated at the local national school and at St Michael’s College, Listowel. He died a comparatively young man in 1955.

A few short years before he had the heart rending experience of seeing his youngest son Val, precede him to the grave. Val was probably the most promising of all the young Kerry writers of his time. From a young age he produced excellent poetry but it was not until he came to Saint Michael’s that his talents really started to take shape. He died a schoolboy. Anyone who ever knew him will remember him forever with affection and respect.

Robert Leslie was a poet of consequence. He preferred to be called Bob and that is how we shall refer to him from now on. He was a colourful character with a host of friends. He liked a drink and he liked good company. Some of his best poems were Rabelasian. Those that were not were often compared to the poems of Robert Burns for whom Bob held an enormous respect. Personally, I think he was more influenced by Matthew Arnold than any other.

Only one collection of his works was published and this for private circulation. The work was entitled, “Thistles and Docks” being, according to the author, “a selection, grave, gay and Rabelaisian from the works of Robert Leslie Boland, Farnstack House, Lisselton, Co. Kerry.”

It contains many of his more popular pieces. There is “Sonnet to a Lavatory.”

To house the toilet needs, Repository

Where bodily wants are eased and the heart

Thou art the throne room of soliloquy

Where each lone patron with no special art,

Imprisoned waste and the unmuffled fart.

Within thee, glad to leave their votive gift

(So democratic for their Royal state)

Who would not hail thee, backward edifice ?

Cloister for brief retirement and for peace

I don’t think readers will be really offended by the foregoing. The great merit about Boland was that he was always marginally ahead of the censor. During the war years Bob applied to the Department of Commerce for sugar . He had six beehives and he needed sugar to keep the inmates alive. His application was naturally in verse:

For sugar for bees whose plight is starvation .

Be generous you must for my (six in number),

Like Europe are feeling the pinch of the hunger.

You know how the weather down here militated

Against the good “workers” who waited and waited.

For fine sunny days to go out in the clover,

But vain were their longings and summer is now over.

This is a thought your Department should cherish

There follows an incredibly beautiful allegory in which the queen bees have their say. One describes her honeymoon with a drone who has just been stung to death:

I remember the morning of our wedding flight;

His vigour, his passion, his speed like a kite

When up towards the ether, with wings humming loud,

He gave me the razz right on top of the cloud.

Bob once participated in a Radio Eireann question time which was broadcast from Ballybunion. When asked his occupation by the question master, he replied immediately: “Philosopher, philanderer and farmer.”

His most oft-quoted poem, “Loneliness”, deserves to be quoted in full but alas there isn’t enough space It was compose, after midnight, whilst walking over a three mile stretch of moorland between Ballylongford and Farnstack. He was also very fond of walking from the Ballybunion strand to the mouth of the Cashen. Sometimes he would recognise and salute acquaintances. Other times he would be lost in his thoughts and heeded nothing but nature;

Lone as a climber on some Alpine peak.

Lone as the last kiss on a lover’s cheek

Lone as the Pole Star from its sky tower watching.

Lone as a gander when the geese are hatching.

Lone as a maiden weeping in distress.

Lone as a bullock when the cow says “yes.”

Lone as a skylark who has lost his song.

Lone as a eunuch for his gems are gone.

Lone as a petrel on the stormy wave.

Lone as a deadman in a nameless grave.

Lone as a lassie on the bathroom bowl,

When she finds no paper in the toilet roll.

Lone as the Artic when the Polar bear howls

In the blizzard from his
frozen lair.

There is in the poetry of Bob Boland an underlying dismissal of himself. He builds beautifully with a series of perfectly disciplined couplets and then for what would seem like pure devilment he allows his theme to collapse by following up with a Rabelaisian climax. It is a conscious dismissal and it could be that he was uncertain about his ability to write poetry. This was a shame because in many ways he was unique particularly in his choice of themes which range from “Ode to a Po” to “Sonnet to a Spud” which was broadcast by the B.B.C.

There was the same self dismissal in George Fitzmaurice who was born less than three miles from the Boland home at Farnstack. Bob however, was outgoing and gregarious while George was pathologically shy.

There are such diverse composition as “Ode to a load of Hay” and “Sonnet to a Cowdung”:

Cowdung all nature greets you with a smile,

Your blending essence made our Emerald Isle.

This article by the late and great John B Keane first appeared in the Limerick Leader on April 9, 1977