Ita Hannon has a superb eye for a photograph 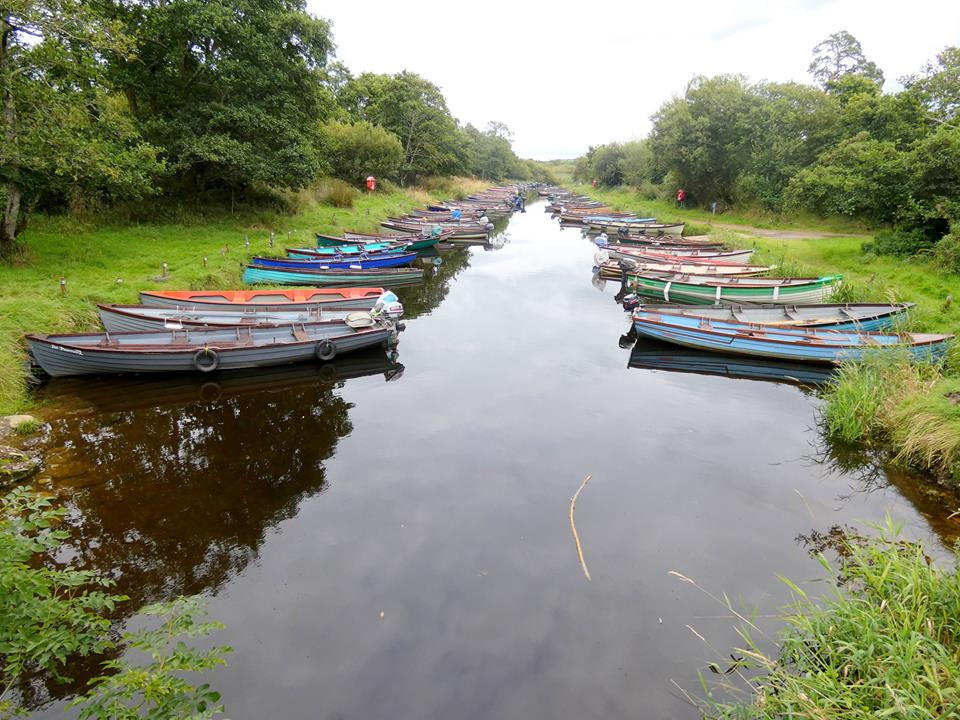 Boats always fascinate this photographer. It’s in the blood.

New Kid on the Block 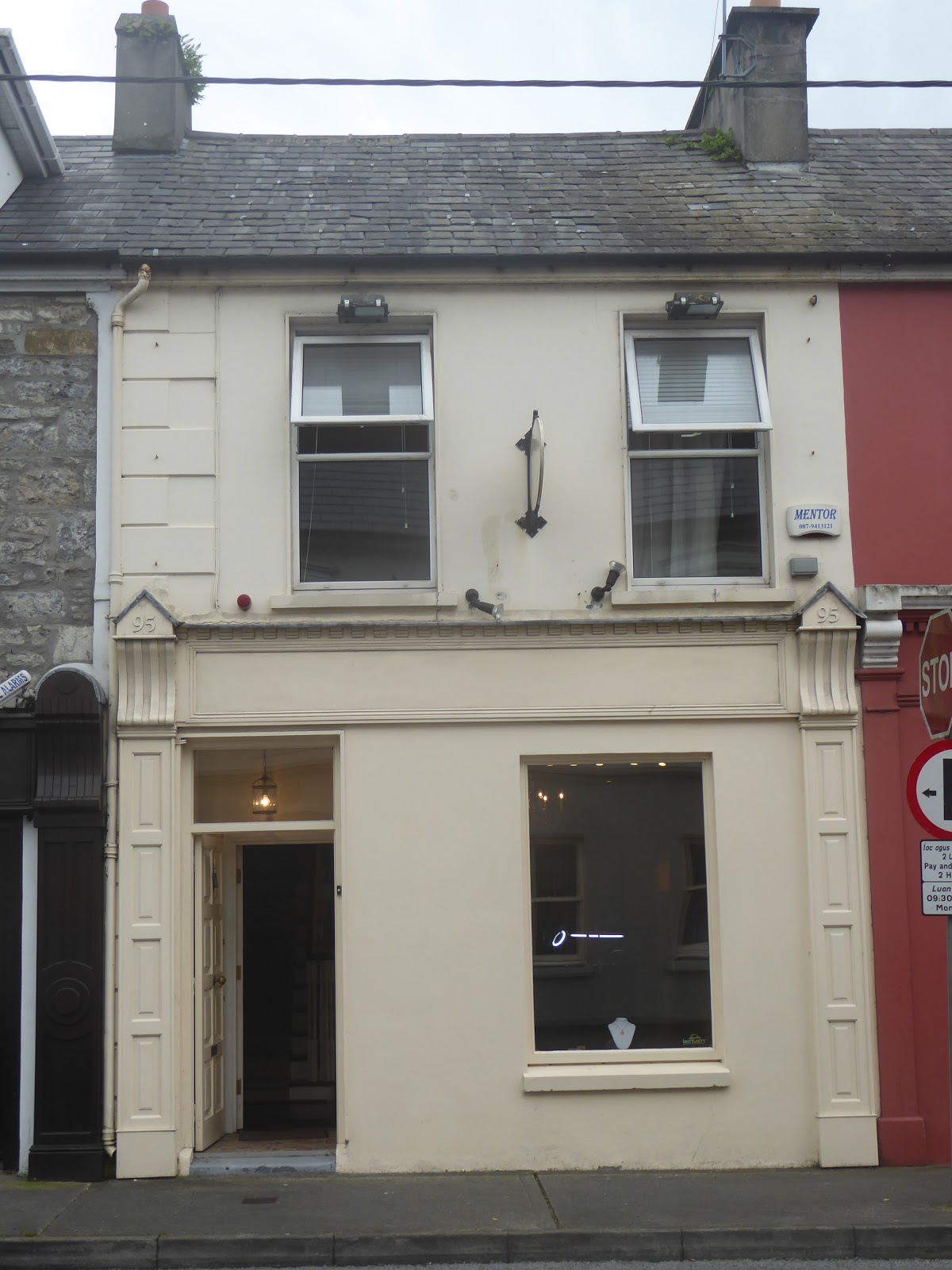 This premises on Church St. is soon be home to a gold and silversmith’s workshop and shop.

Watching a master signwriter at work

The sign writing and artistic painting work of the Chute family is a hallmark of Listowel’s shopfronts. Here is Martin Chute at work on the O’Quigley Hairdressers sign. 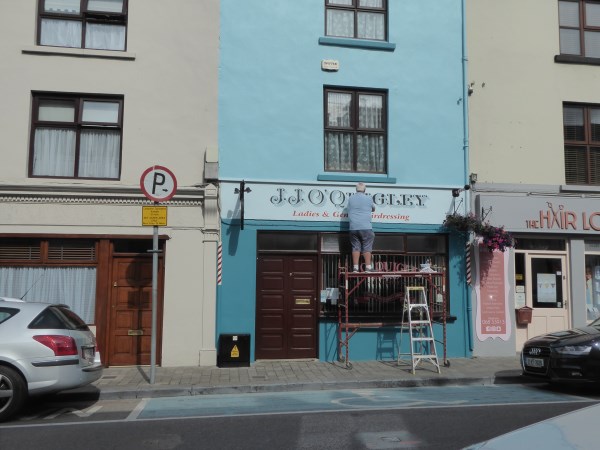 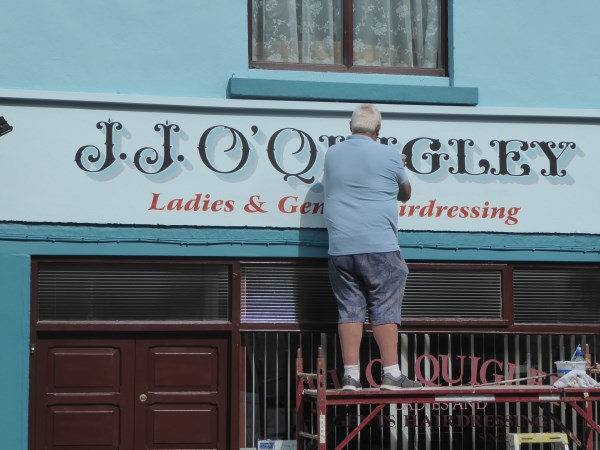 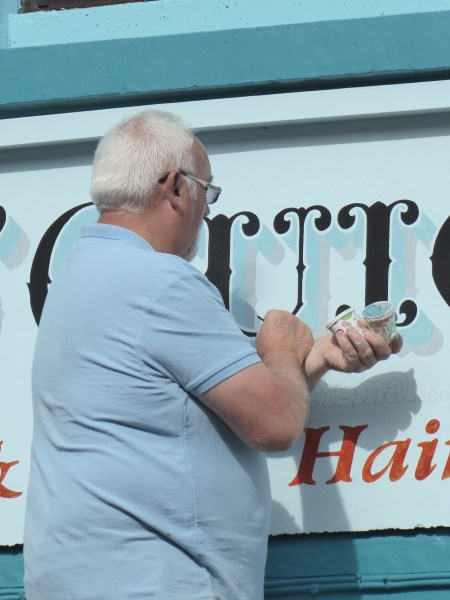 To mark the opening of the newly restored section of monorail, Irish Times columnist, Mary Mulvihill wrote a lovely “Irishwoman’s Diary” article. Junior Griffin kept it and gave it to me. Cliona Cogan retyped it and I present it to you here.

An Irishwoman’s
Diary by Mary Mulvihill

Now here’s an
unusual double date. An eccentric new railway opened in North Kerry 125 years
ago today, which was inspired by, of all things, a camel train. And the
previous day in Belfast, a Scottish vet rolled out a clumsy arrangement of
rubber, copper, wire and fabric pieces, intended to make bicycling smoother for
his son, inspired by the air cushions that stop patients from getting
bed-sores.

One of these inventions would go on
to revolutionise transport, one was destined to be a cul-de-sac. But if you had
been here on March 1st 1888 (or to be precise, February 29th),
would you have picked the winner? Which would you bet on, camel train or
bed-sore cushion? Take the camel train. This was the brainchild of a French
engineer, Charles Lartigue, who had seen camels in Algeria walking tall and
comfortably carrying heavy loads balanced in panniers on their backs.

Before you could say “Ballybunion to
Listowel” he had designed a new type of railway. Instead of two parallel tracks
on the ground, it had a single rail sitting out of harm’s way above the sand
and held at waist height on A-Shaped trestles. Specially-made carriages would sit
astride the trestles like, well, panniers.

By 1881 Lartigue had built a 90 kilometre
monorail to transport grass across the Algerian desert, with mules pulling “trains”
of panniers that straddled the elevated rail.
In theory, a monorail system should be lighter, easier and cheaper to
build than a railway with twin parallel tracks, so several European railway
companies took an interest in Lartigue’s novel idea. But only two Lartigues
were ever built, one was in  France, but
it was never used; and the other linked Listowel and Ballybunion. When it
opened on February 29th 1888 it was the world’s first
passenger-carrying monorail. The future was looking bright and possibly even
camel-shaped.

Kerry’s unique Lartigue railway
carried freight, cattle and passengers, bringing tourists to Ballybunion and
carting sand from the beaches. And it ran for 36 years, which was pretty
amazing because although Lartigue’s design worked fine with mule trains in the
African desert, it was less suited to locomotives pulling passengers and
freight across north Kerry.

The engines, for instance,  and all the carriages had to be specially
made at considerable expense. (Each locomotive had two boilers and two cabs,
balanced on either side of the rail, the driver riding in one cab and the
fireman in the other.) And because the elevated railway crossed the country
like a fence, bridges were need to carry roads over the line – there could e no
such thing as a “level-crossing”.

Loads also had to be carefully
balanced – a time-consuming process, especially where cattle were
concerned.  Even then, the Lartigue had a
reputation for rolling sickeningly as it moved. It was also renowned for being
noisy, unpunctual and slow, taking 40 minutes to travel the 15 kilometres
between Balybunion and Listowel.

There was never enough traffic to
support the route, and after the line was damaged during the Civil War, the
railway closed in 1924. A short section of the track was salvaged, but
everything else was scrapped.

Back in Belfast in the 1880s, nine
year old Johnnie Dunlop had asked his dad to make bicycling less of a
bone-shaking experience. John Boyd Dunlop was a Scottish vet with a successful
practice. He had an inventive streak, having already devised various veterinary
medicines and implements. In those days wheels then were solid and roads had
rough dirt surfaces, or at best were cobbled.

Dunlop realized that cushioned
wheels would be more pleasant and thought of trying tubes filled with water.
But his doctor and friend, John Fagan, was familiar with patient cushions and
suggested using air.  Dunlop improvised a
tube from a sheet of rubber, inflated it with a football pump and fixed it
around the rim of a wheel, holding it there with copper wire and strips of
fabric torn from one of his wife’s dresses.

On February 28th 1888,
Johnnie took some prototype  air tyres
for a test drive on his tricycle and returned ecstatic. There weren’t just
comfortable, they were fast as well.

In December 1888 Dunlop patented his
“pneumatic” invention. But the first tyres were too bulky for a conventional
bicycle and special frames had to be made to accommodate them. The first
official outing was in May 1889 at a Belfast cycle race when, to considerable
derision, local racer Willie Hume appeared on a bike with thick and
clumsy-looking pneumatic tyres. He won every race, however, beating the Irish
champion Artheur du Cros.  News of the
new tyre spread – especially when it was banned from some races as being unfair
to the competition.

And the rest you say is tyre-some
history. Dunlop’s tubes made cycling more comfortable and faster, but their
greatest impact was on the new automobile. Without the pneumatic tyre, the
motor car might never have become popular, the internal combustion engine might
not have commercialized and aeroplanes might never have taken off.

But they don’t give up easily in
North Kerry. A short stretch of the Lartigue railway has recently been
recreated. A new double-sided locomotive, specially built in England, arrived
at Listowel last March.  And this spring,
all going well, and thanks to work of scores of dedicated Lartigue devotees,
the camel train will ride again, 125 years after it first steamed into the
future.

Jumbo’s is a lot more than your average fast food restaurant. This iconic restaurant is run by the gentle O’Mahoney family who have contributed so much to Listowel over the years. Every young person’s story of growing up in Listowel includes some Jumbo’s memories.

This is how it used to look. 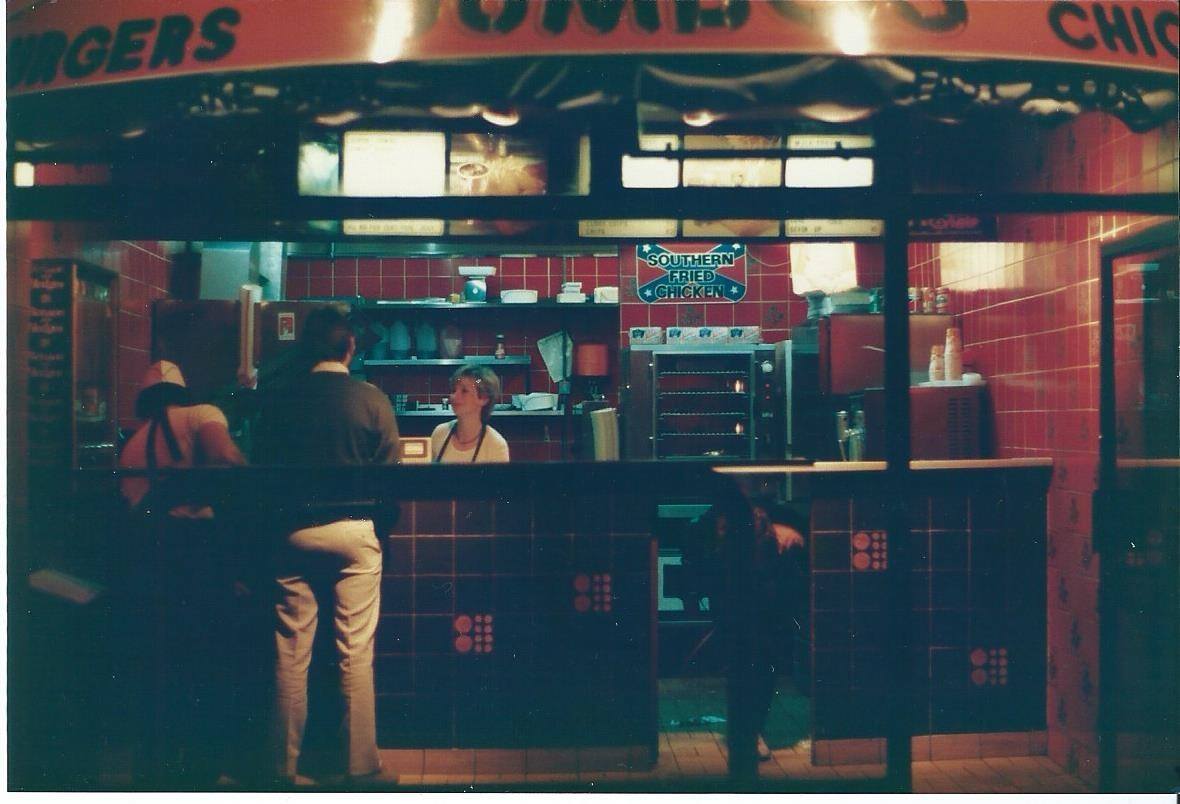 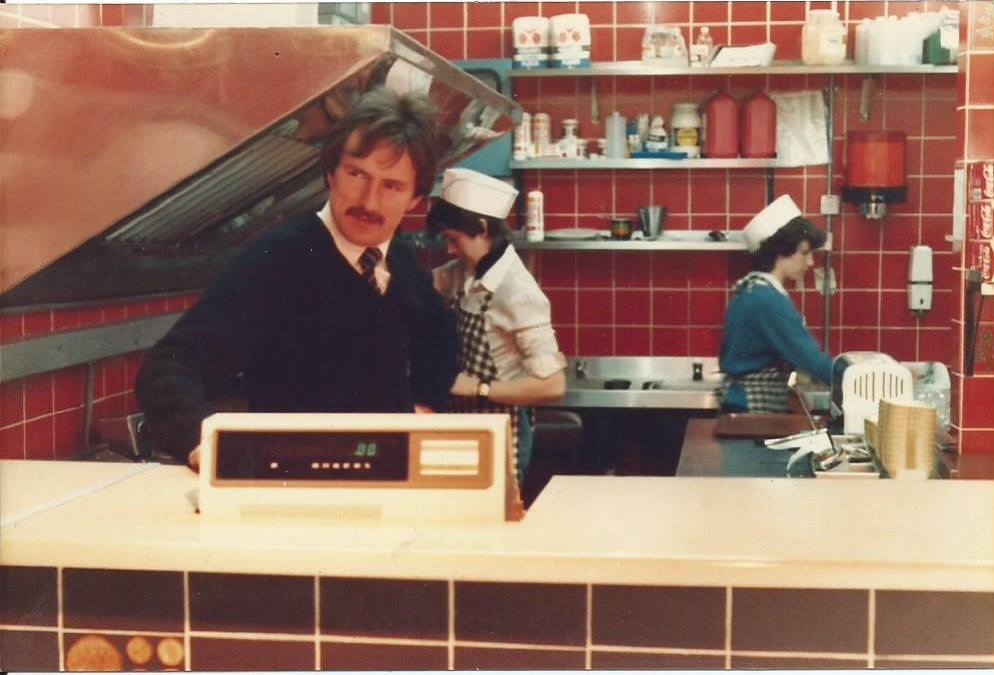 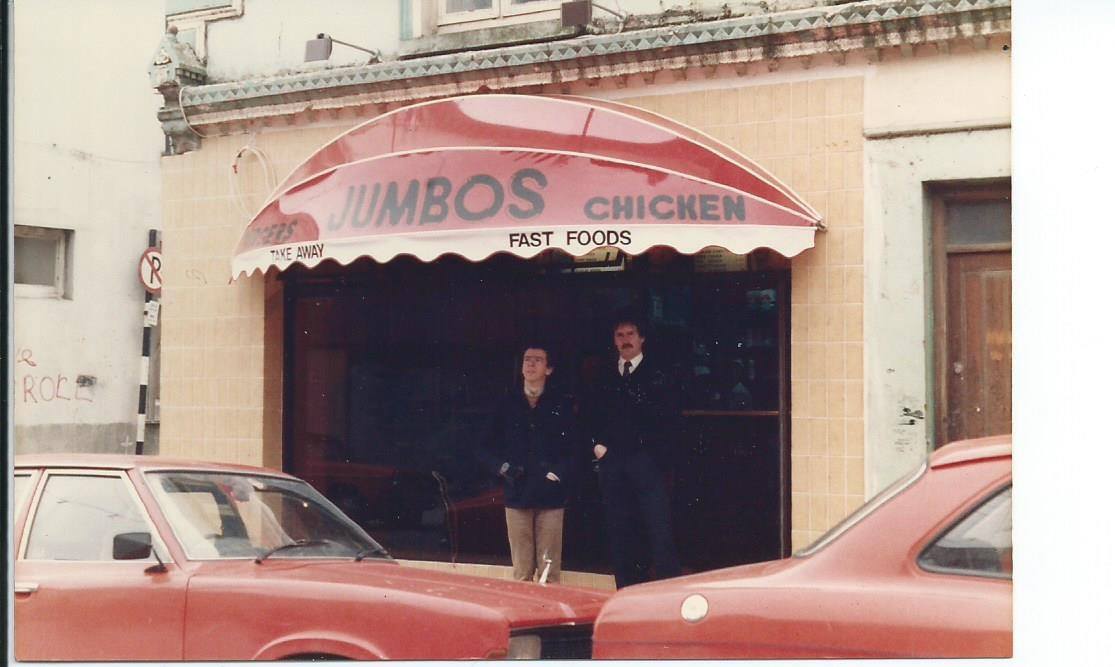 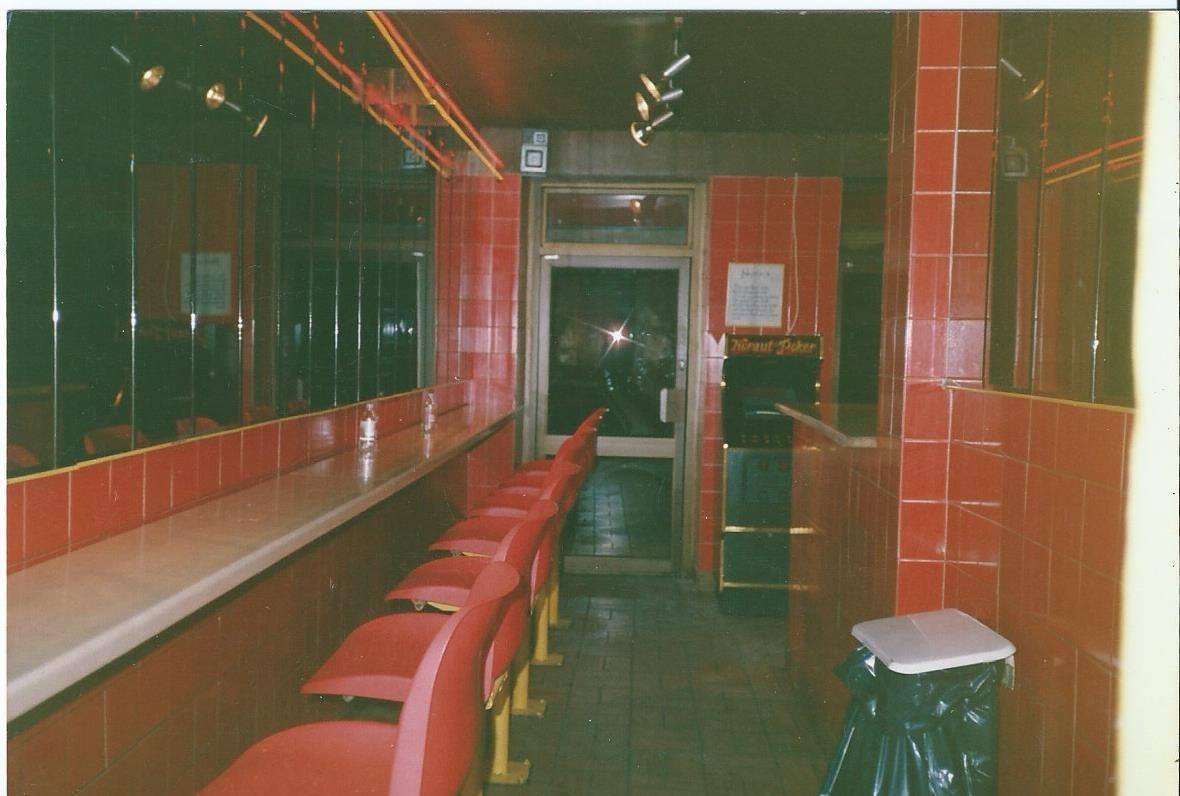 That was 1983. Today the new look Jumbo’s is still run on William Street by the O’Mahony family.

Nowadays its Damien and Jade who have replaced Dermot as the faces of Jumbo’s. A hallmark of the O’Mahony’s method of doing business is a strong dedication to the town where they operate. They have given employment to many local families over the years and they have dedicated themselves to giving back to the town in the form of involvement in local organisations, particularly Listowel Tidy Towns and Love Listowel. 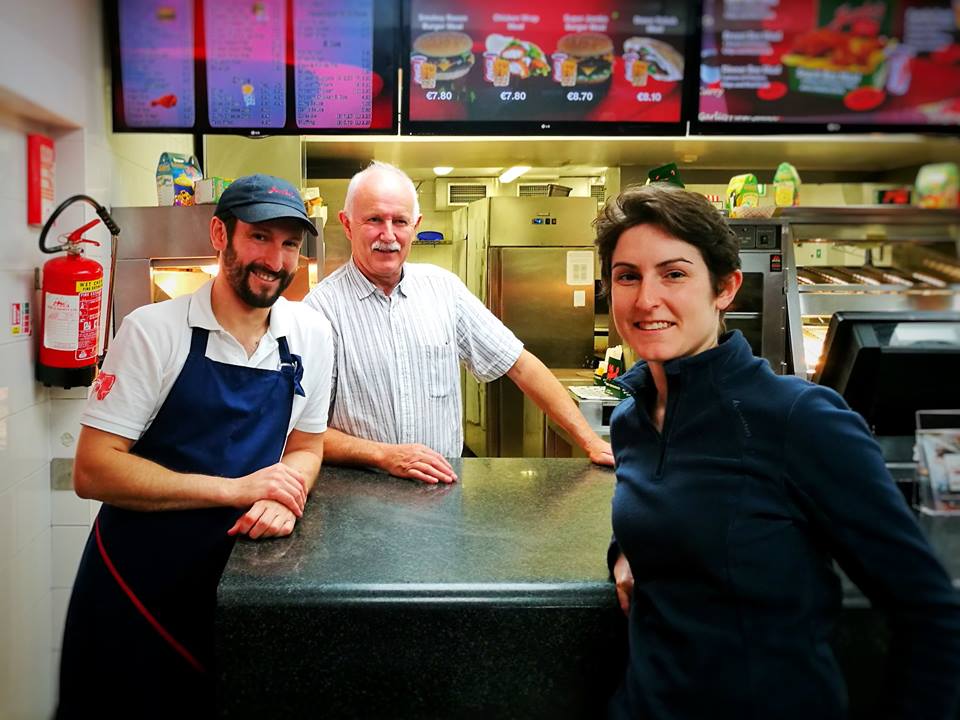 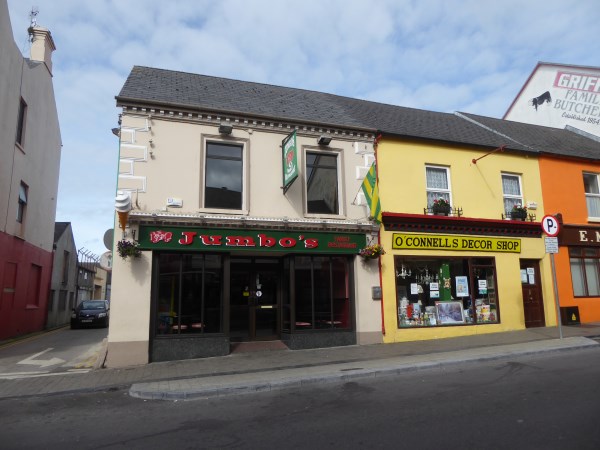 Jumbo’s has made this corner all its own.