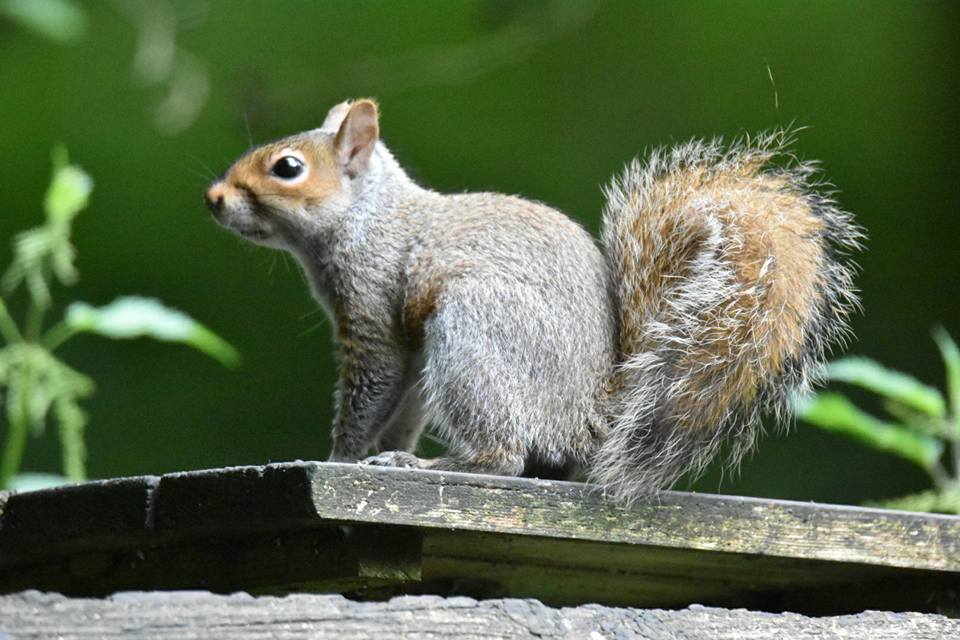 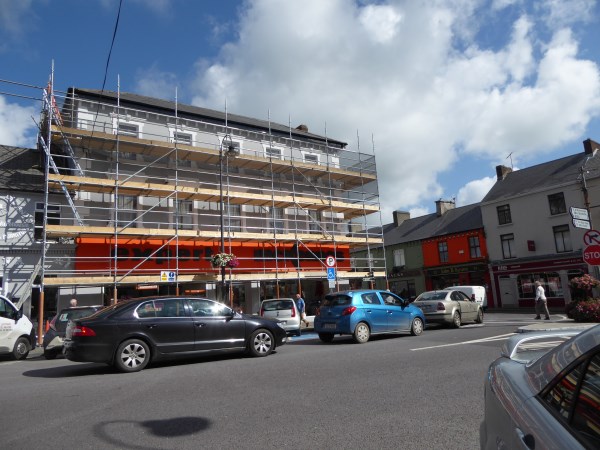 McKenna’s is looking splendid in its new coat. 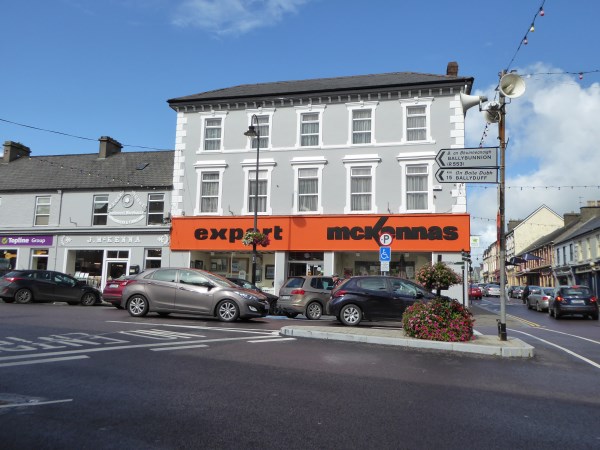 Recently I included the below snippet in a blog post

Passing to the diocese of Kerry, I observe
that at a mission by the Franciscans, in the parish of Brosna, 5,000 persons
communicated, 2,000 were invested with the scapular of the Blessed Virgin, and
1,200 were enrolled in the Confraternity of the Holy Family. Moreover, six
unfortunate persons who had become ‘Jumpers’ made, with their families, a
solemn public recantation. I may mention that this place was once the centre of
a Protestant proselytising traffic, I doubt if there is any single Protestant
there now.

Has anyone any idea what Jumpers were?

Joe Harrington answered my call. Here is the explanation from the Clifden heritage organisation:

The Famine
years were particularly harsh all over the west of Ireland, and especially in
the Connemara region whose population of tenant farmers and labourers depended
almost entirely on the lumper potato. Thousands died when the potato crop
failed in the summer of 1845 and failed again over the following three years.
Those who managed to survive were weakened by years of hunger and disease and found
it difficult to restart their lives as their work tools, farm implements and
furniture had been sold to raise money for food. This was the environment into
which the Irish Church Missions stepped when it began its proselytising work in
Clifden in early 1848. Its arrival, with plentiful supplies of food and
clothes, must have seemed like a godsend to the starving poor of Connemara.

The Irish
Church Missions was established by Revd Alexander Dallas, the Church of England
rector of Wonston in Hampshire and had been active at Castlekerke, near
Oughterard since 1846. Its ambition was to convert the Roman Catholic
population of Ireland to scriptural Protestantism and it was handsomely funded
by the Protestant population of Great Britain. The Irish poor who attended the
Irish Church Missions schools and churches of received clothes and food in
addition to educational and religious services and, with the west of Ireland in
the midst of a dreadful famine, it is unsurprising that the poor of Connemara
eagerly flocked to the Protestant Irish Church Missions. Within a short time the mission could correct
claim a very large number of converts or ‘jumpers’ as they were known. [It is
thought that the term Jumpers comes from the Irish expression d’iompaigh siad –
they turned.]

It is a strange saying. I thought it was probably an incorrect rendition of some similar sounding-word, maybe ‘Hearken.’ This was much used in biblical connotations-

Hearken, brothers, give ear unto my words

However, I believe that is not the case.

I was later informed that ‘By Herkins’ is, in fact correct, and this is validated in the story, “The Lady of Gallerus” by T. Crofton Croker 1798-1854.

It echoes of wonderment:  “By Herkins, I nothing but a made man with you, and you with a King for your father.”

Finally, a ‘Jumper’ is someone who changed from R.C. to Protestant- usually as a result of hunger and proselytising. He or she ‘jumped ship!’ Or took the soup and became known as a ‘Souper.’

Dingle was noted as a Colony of Soupers/Jumpers.

Brosna also had a colony (though some were ‘economically’ inspired and did it for gain. Others did it to stay alive, which was o.k. in 1847 or thereabouts. Many we

nt back to their old faith when their bellies were full again!

Fealebridge on the Kerry-Limerick border (near the creamery on the old main road) had its small colony. There was a proselytising Minister, the Revd. ‘Ned’ Norman there, and he had a church in the middle of no-where. (It is reduced to rubble now- with some fine cut limestone).

Going to the Creamery 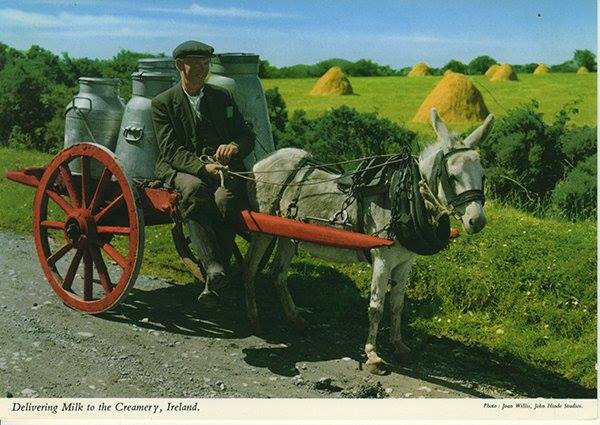 This lovely old postcard was shared recently byListowel History Festival. The History Festival is a new venture from the people behind the military festival. The time had come to move on from the military emphasis.  In future this festival will look at all aspects of history. If you have any ideas of how this new history weekend could be enhanced get in touch with them through their page. They are very anxious to get as many diverse aspects of history covered in the weekend.

Back to the postcard. Doesn’t it take you back?  The donkey looks young and sprightly to me and his cart is either new or newly painted.  The saved hay in the background says that it is summer. I wonder could the history festival find a donkey and bring him into the town and tackle him to a flat cart. How many people nowadays could name the various items of donkey’s tackling? Would’ nt it be a education for youngsters and a trip back in time for us all to see the donkey dressed for a trip to town. 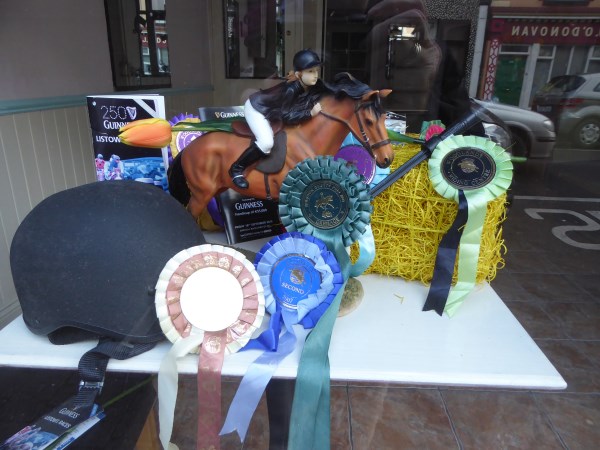 This window display in Lawlers of Church St. is getting us all in the spirit.

Reminiscing at the beginning of another Race Week 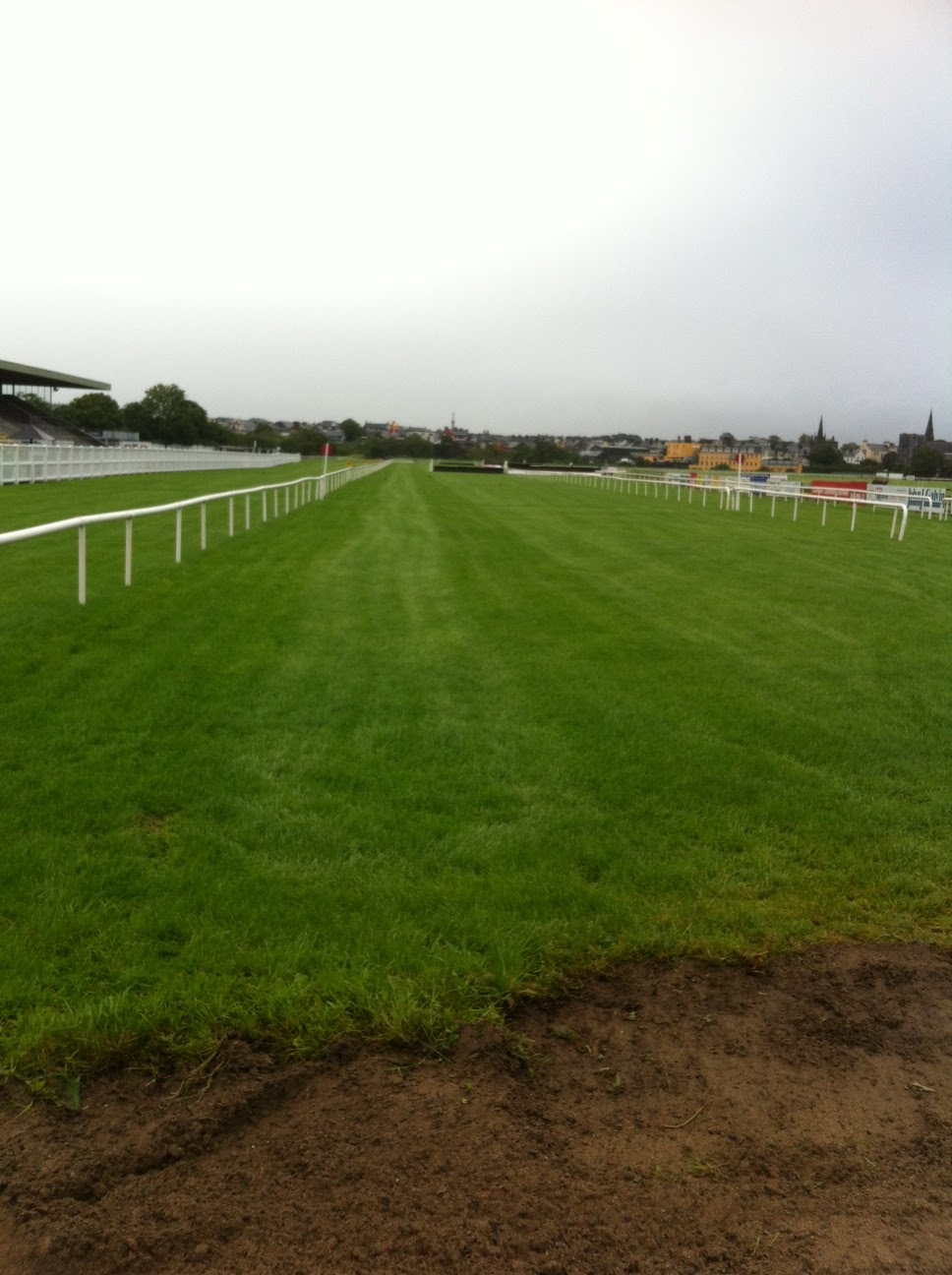 The pristine straight, without a hoof mark… within a
few hours the horses will come thundering up the hill, some gallant winners and
many more gallant losers. The Listowel Arms and twin church spires are in the distance. 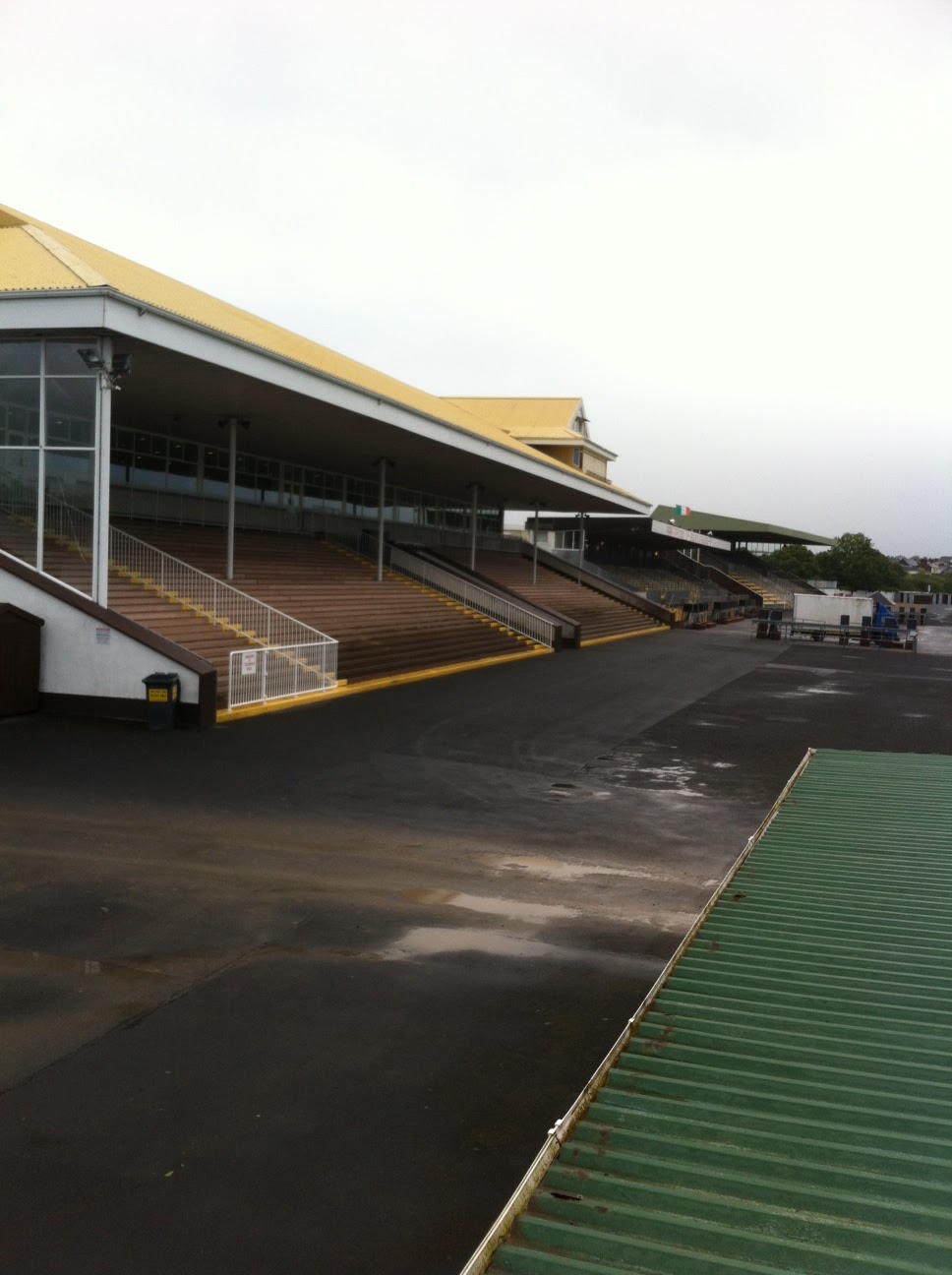 The three stands are ready and waiting to host the
thousands who will flock to the Island for the seven days. 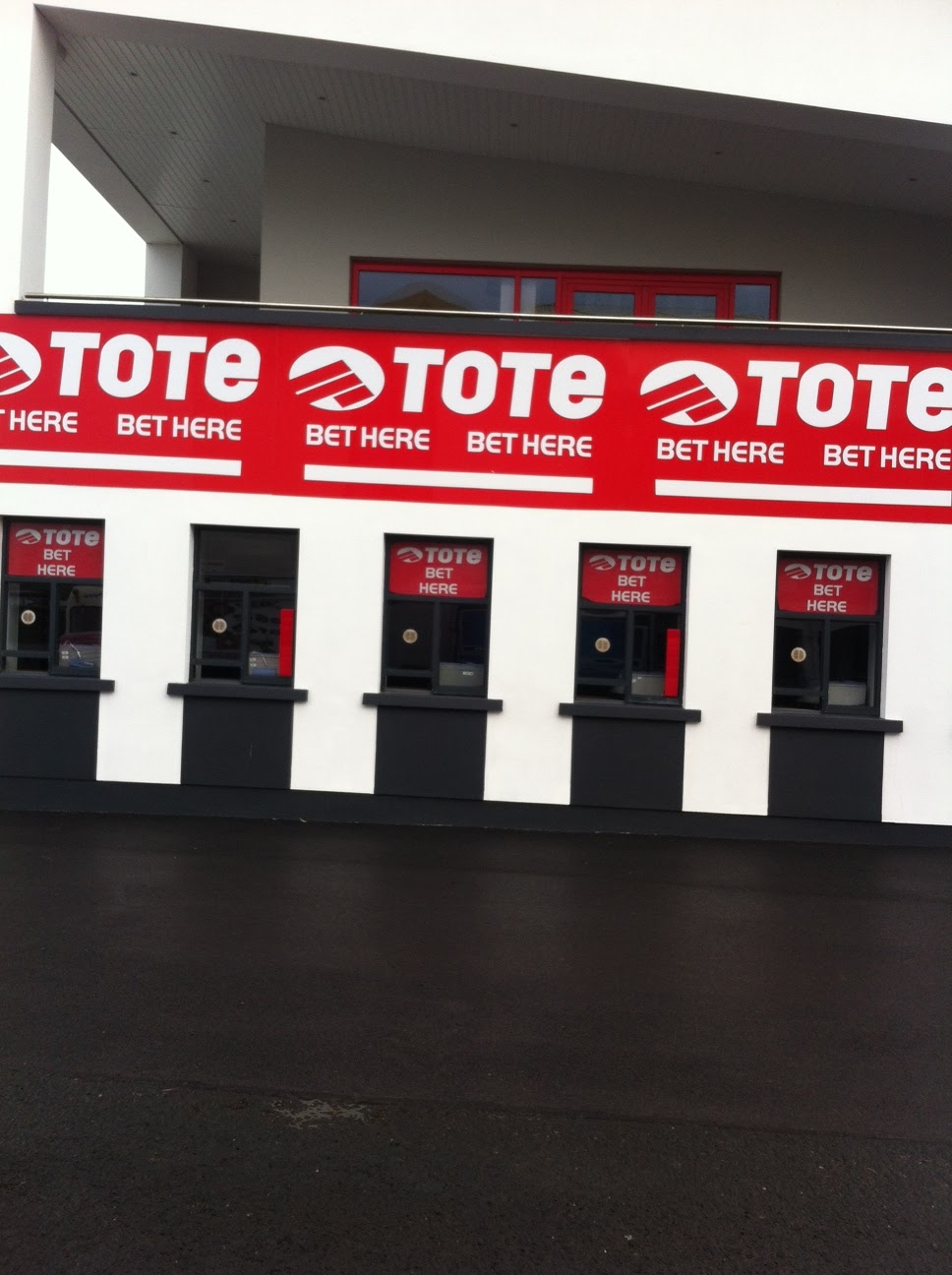 One of the many Tote facilities, this one built into
the new building which was opened last year, it also includes a large bar and
“The Old Weir” foodhall. 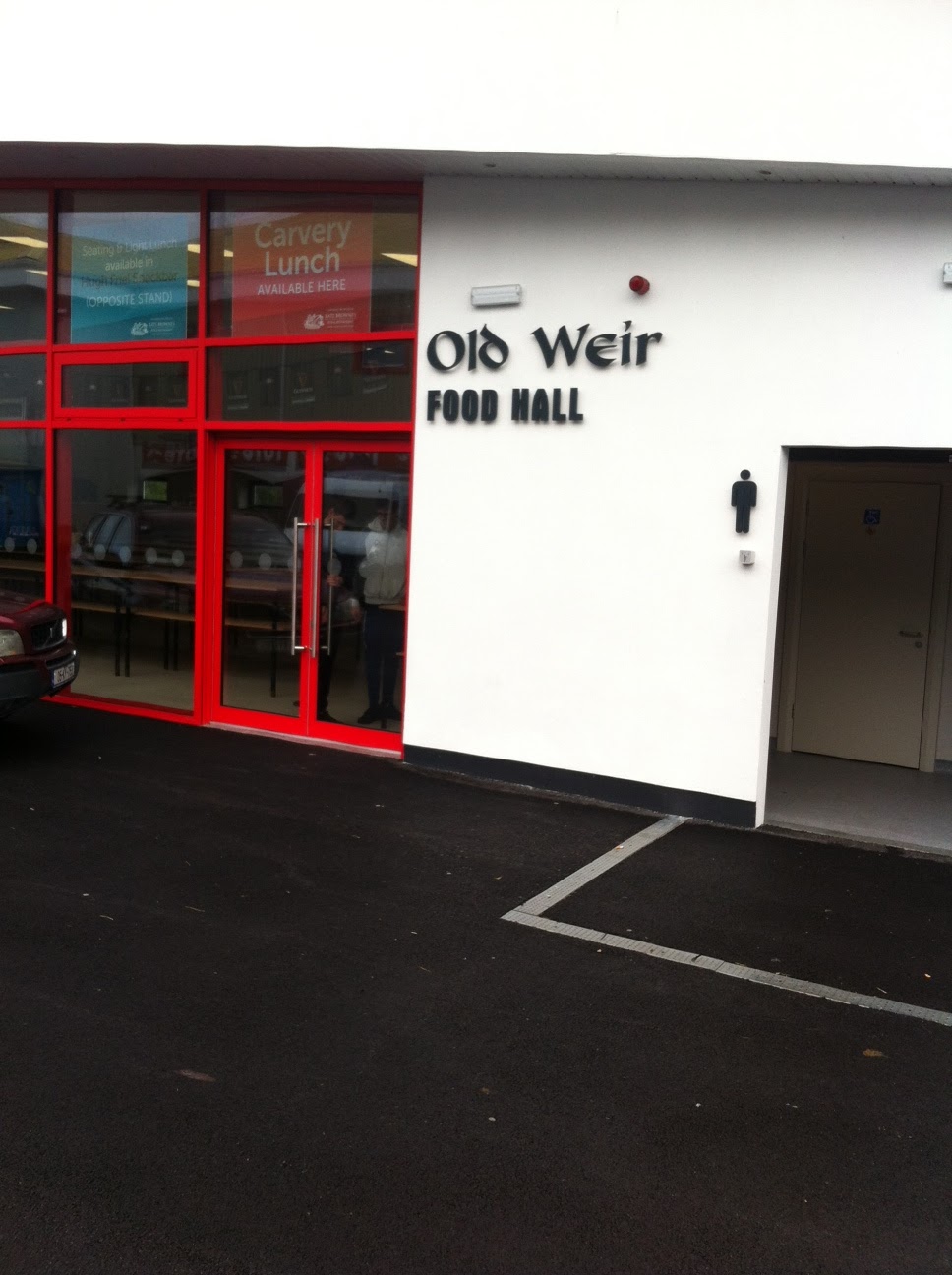 I went for a walk this Sunday morning, 10th
September, back to our Island Racecourse, to see the course in its state of readiness
for the first day of our seven day feast of racing. The memories came flooding
back.

In the days of the 1950s when myself and my contemporaries
were growing up, racing days consisted of three days, Tuesday, Wednesday and Thursday.
We would have school on the Monday, and I remember one of the compositions
always rostered for homework was one, either through Irish or English, with  a ‘ week of race-week theme ‘.

For us townies, the sense of anticipation, would have
began during the previous week when a gentleman called Paul Kennelly from
Woodford would move around the streets with a hay cart which contained
specially large made concrete bases with a hole in the middle.  These had metal handles for lifting.
The bases were left on the edges of the various footpaths at either side of the
road, at distances of about 30 yards. Alongside these were left tall poles,
some painted black and white, more multicoloured, similar to the wooden poles
one will see on showjumping fences. Mr Kennelly’s next job was done with the help
of some of his sons. They stood the poles into the concrete bases. This done,
they strung coloured buntings from the top of each pole to its opposite across
the street, until the streets were ablaze with the fluttering decorations.  Later when trucks were getting higher, a
metal pole was attached to the tops of the poles. It was also customary at one
stage to tie bunches of ivy on to the poles.
This was discontinued when somebody’s emancipated donkey, which had been
tied on to one of the poles, decided to feast on the ivy. The stricken ass had
to receive veterinary assistance and when possible litigation loomed  a
stop was put to this form of decoration.

Strings of electric light bulbs would, I remember,
have been first erected by Gene Moriarty. His family still keep up the practice
to this day.

The market amusements were also a major part of the
week, The Bird family operated the most popular of these, and were located in
the back market, which was, in our time, until the building of the Mart, separated
from the front market by a long shed which ran from the market wall down
towards the river. The top end of the front market, inside both gates would
have contained lines of travellers green coloured canvas topped caravans. This
is why it  was known as the Tinkers Market.
The lower part hosted small-time amusement operators, mostly with swinging
boats and hustlers selling everything and anything. An abiding memory that still
abides is the smell that emanated from the wood-fueled open fires which
would be lit outside the caravans at dusk.

Also in Market Street, McKennas used have installed a
small screen which fitted into the fanlight of one of their small doors. On
this screen throughout the week they would play repeats of that year’s Grand National
and other sporting events, more than likely, similar to Movietone News. I
remember one of these was a match which featured Stanley Mathews.

For those of us living near the railway station, Monday evening
had its own attraction; the arrival of the special train coming from the
Curragh. This would be full of racehorses, scheduled to run in the various
races during the week. The Race Company had a stable yard with around 50
stables at the back of William Street where most of the horses would be housed
and the overflow would go to various houses who had private stables in their
backyards. The various trainers and stable boys would always require assistance
in bringing their luggage and equine requirements to the stables, so we would
become hastily employed and willing stablehands for the evening. The monies
received would happily subsidise race-week pocket money which one would never
have enough of.