Kerry in the 19th Century, a new face at Writers’ Week H.Q. and Mary Young of Ballybunion 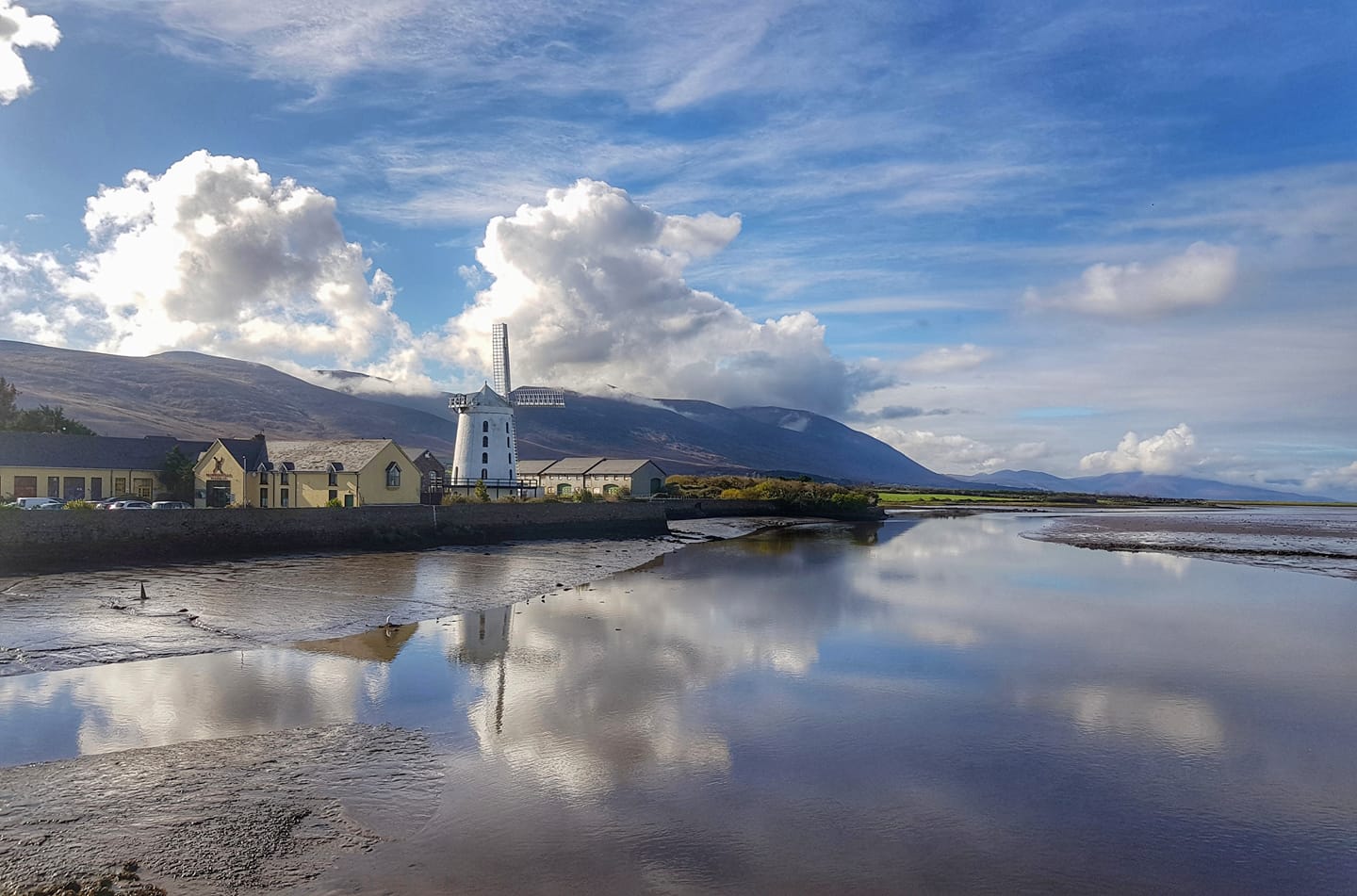 Chris Grayson took this photo of Blennerville in Winter

If your New Year resolution is to get down to documenting the family tree and if your ancestors come from Kerry, here is the best place to start

Listowel native, Kay Caball, runs this website which is full of good advice and handy resources for tracing Kerry ancestry.

Here is an example of one of her interesting posts from her very entertaining blog;

A few pointers to life in
Kerry in the 19th century:

Very few Irish people knew (or even cared about) their exact
year/date of birth. Even when they wrote down a definite date, that was just a
guess.  They weren’t trying to fool anyone or be evasive, it was just
never of any imprtance at home and only on emigration did it become necessary
in the new country for identification purposes.   So rather then
settle on a particular date, take dates in a range, from x to y.

Most Kerry people married within neighbouring townlands.
They met through neighbours, relatives, friends.   In the first
half of the century, Kerry men and women mostly married in their early
twenties.  After the Great Famine 1845-1852, the average age was thirty
and over.   After the Famine,  the more land they tenanted or
eventualy owned, dictated that ‘matches’ were made. These were the middle to
‘strong’ farmers.  To marry into a farm, a girl had to have a dowry which
in turn would provide the means for the husband’s sisters to get married
themselves.   A man marrying into a wife’s farm (known  as a
‘cliamhán isteach), needed to have cash/youth (preferably both) with a view to
keeping and developing that farm.

The nearest port for emigration, with ships mostly to Canada,
was Blennerville, the Port of Tralee
from 1828 until 1867.    The railway came to Tralee in 1859. Stopping
in Rathmore, Killarney, Farranfore and Tralee it was then possible to travel to
Queenstown or Dublin by rail and onwards from there with most ships from
Queenstown bound for New York (some via Liverpool).  Limerick Port was
also used.   Charles Bianconi’s
long cars started to serve Tralee to Cork at first c. 1828 and eventually
called to Killarney, Killorglin and as far as Glenbeigh.  Mail cars also
operated between Tralee, Dingle, Castleisland, Killarney and Listowel.
These would be used mostly by ‘the gentry’, ordinary folk could not afford
them.

Taking into account the travel limitations, ask yourself where
they might have attended church, where would they have gone for market and fair
days and to purchase the ticket for their emigration?  Where did they go
for court and legal affairs?  Were there actually roads in their native
townlands?   As late as 1828, the Kenmare to Derrynane road was seven
hazardous hours on horseback and according to Daniel O’Connell, best approached
by Killarney or by sea.  Getting to north Kerry from Limerick was best
acheieved by boat to Tarbert and thence by poor and boggy roads to Tralee.

Why did your ancestors emigrate?  To get work is the
immediate answer. Opportunities for education, particularly in the first half
of the century,  were very limited, especially if you lived outside the
main towns, and while education was highly prized, it was not always possible
for all the children in large families to avail of it.  There was no
employment for the vast majority, no land available to acquire and absolutely
no ‘opportunities’ as they are now called.

Who paid the passage and why did they decide on particular
locations?   This is probably one and the same question.  Single
people emigrating got the fare
from relatives already in the emigrant country, which would be paid back after
arrival and employment.  This ‘passage money’ would then be re-cycled on
to the next brother or sister whose turn would come to take the
boat.   The location was not chosen by the emigrant, he/she choose to
go where there were already relatives, neighbours and friends who would try to
have jobs already lined up on arrival.  Different Kerry parishes are well
known for providing large numbers of immigrants who settled in the same
destinations.  West Kerry and Ballyferriter/Dunquin/The Blasket Island
natives almost all went to Springfield, Massachusetts.   Ballymacelligott
natives went in large numbers to New Zealand and the Beara Peninsula people
went to Montana.   The Five Points, Lr. Manhattan became home to
hundreds of Lansdowne Estate emigrants.

Why are names of our ancestors all spelled in different
ways?   Standarised spelling was not the norm, poor education meant
that a lot of people could not read or write in English.   A majority
of Kerry people spoke mostly Irish up to the Great Famine with those in the
Dingle Penisula and South Kerry continuing to do so.  If a clergyman or
government official wrote your name down as he heard it and you were unable to
read or write yourself, you just went along with that spelling for the rest of
your life and indeed so did your descendants.   I have just been
tracing a family of ‘Corrigans’ who turn out to be ‘Corridons’ in Kerry and I
could quote many more such examples.  And we won’t get into the Sullivans
(or O’Sullivans)
who ordinarlily went by a ‘branch’ name at home and still used that on arrival
in the U.S., making it very very difficult to find ancestors later.

Aother query often received.  Yes both ‘Sullivan’ and
‘O’Sullivan’ are the same as well as all the other ‘O’s  – O’Connor,
O’Connell, O’Driscoll, O’Neill, etc.,(Connor/Connell/Driscoll/Neill).

Last but not least, if your ancestor seems to have married two
different ladies, or two different men, check that the first has died, or that
the Church marriage register (pre 1864) or Civil Marriage record (post 1864)
denotes widow or widower as No, we didn’t have divorce in Ireland (or Kerry)
until June 1996. 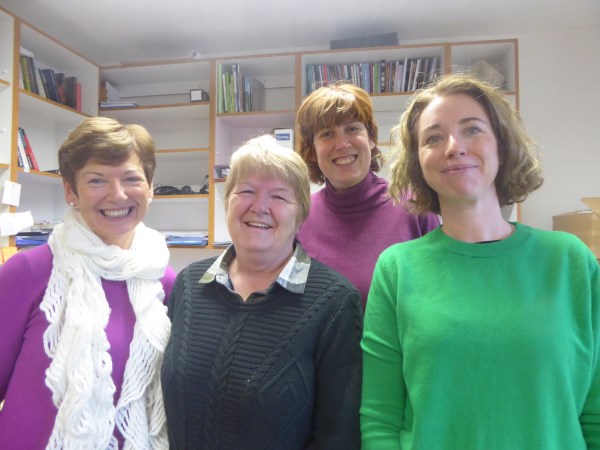 Sinead MacDonnell is the new kid on the block. She joins Eilish Wren, Maria McGrath and Máire Logue. This is the team who will be organising the festival for 2018.

Who is Mary Young? 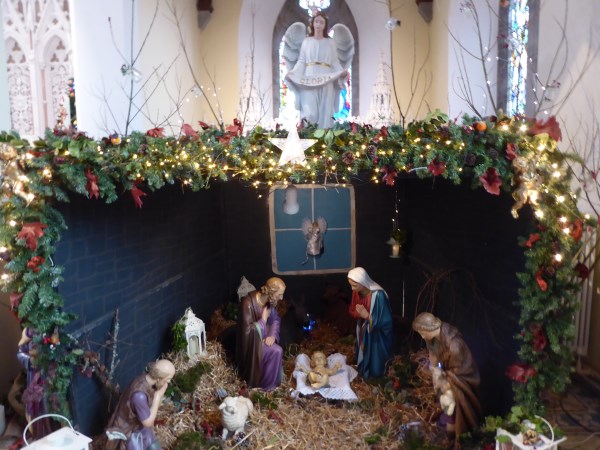 On my “Twelve Cribs of Christmas” tour with my Christmas visitors I made it to Ballybunion. Above is the lovely crib in their magnificent church. 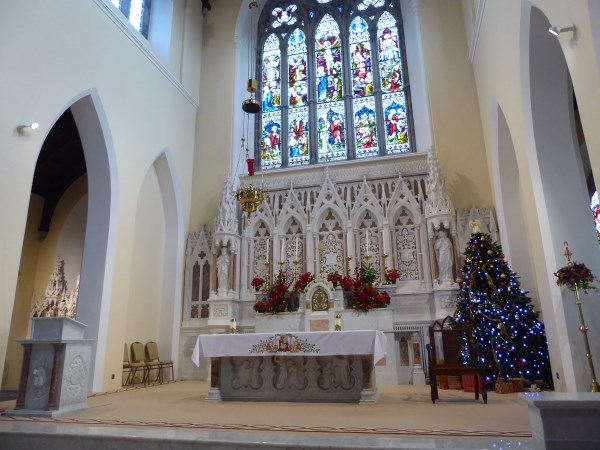 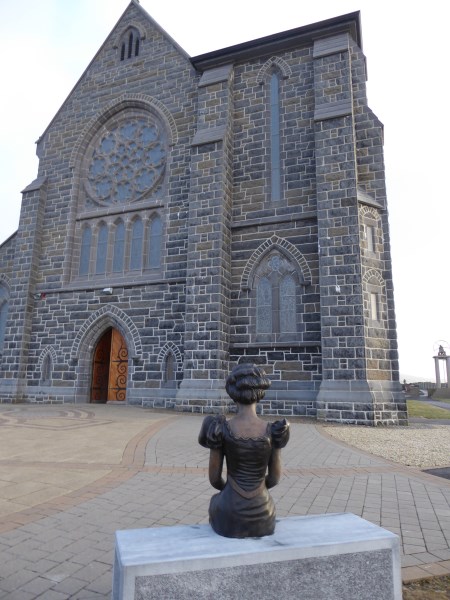 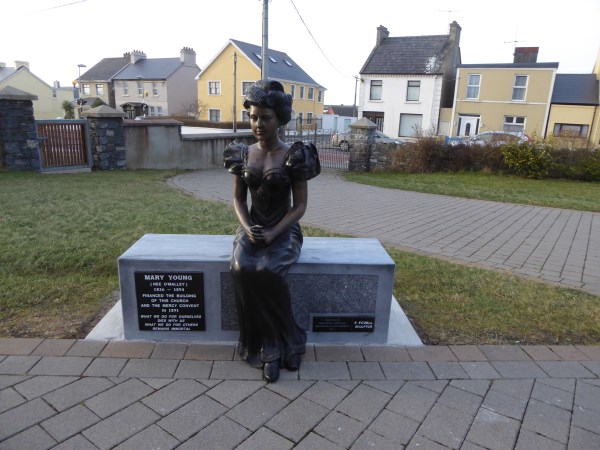 This was my first opportunity to see and photograph the new statue of Mary Young. Apart from the fact that the image made me feel cold (it was a freezing day in this exposed space), I’m not at all sure this sculpture is appropriate in its current location.

We are used to statues of saints in the grounds of our churches. It will take me a while to get used to a statue of a rich benefactor, dressed for a ball rather than a trip to mass.

Who was Mary Young?

According to a report in The Kerryman at the unveiling of the statue, Mary was a very generous contributor to the parish of Ballybunion.

She was born, Mary O’Malley, in Kilconly. She married John Young, an English tea planter whom she met in Clare where she was working and they lived in Dublin.

After John’s death, she inherited his great wealth. She came to live in Ballybunion. She lived at Doon Road for 12 years. When she returned to Dublin in the early 1880s she gave her house to the the parish to be used as a school.  The Sisters of Mercy built a convent and ran a school there for over 100 years.

Mary returned from Dublin and built herself a new house in Church Road and she suggested to Fr. O’Connor that they build a new church to be called St. John’s “in memory of her husband”.

Mary used much of her inherited wealth to build the church. It cost €8,500.  It was built in the style of Pugin which was a style very popular at the time.

The church was designed in 1892 by the Dublin-based architect George Coppinger Ashlin (1837-1921). Building began in 1894, but Mary Young died later that year before the church was completed, and she is buried with her husband in Kilehenny Cemetery. The first Mass in the church was celebrated on 6 August 1897, when Saint John’s was completed.

Her contribution to Ballybunion is enormous and she richly deserves to be remembered and honoured.

However I wouldn’t have put her on her own in a low cut ballgown on a cold seat outside the magnificent church she helped to build. 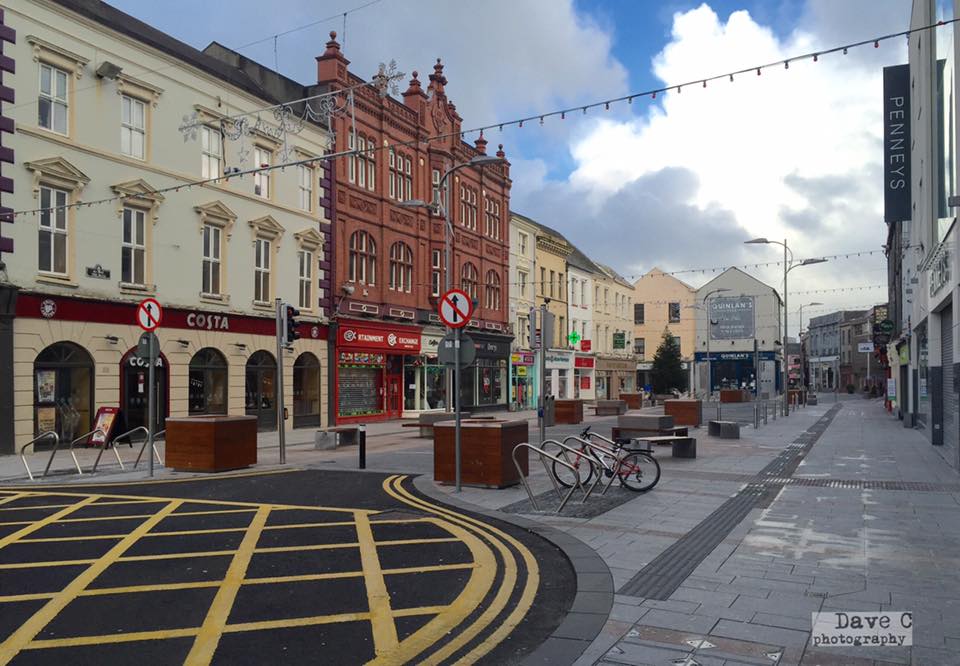 Sarasota, Athea and a Listowel player who nearly made the Kerry team