Killarney Cathedral, Dress to Impress and Volunteers at the local V.de P shop 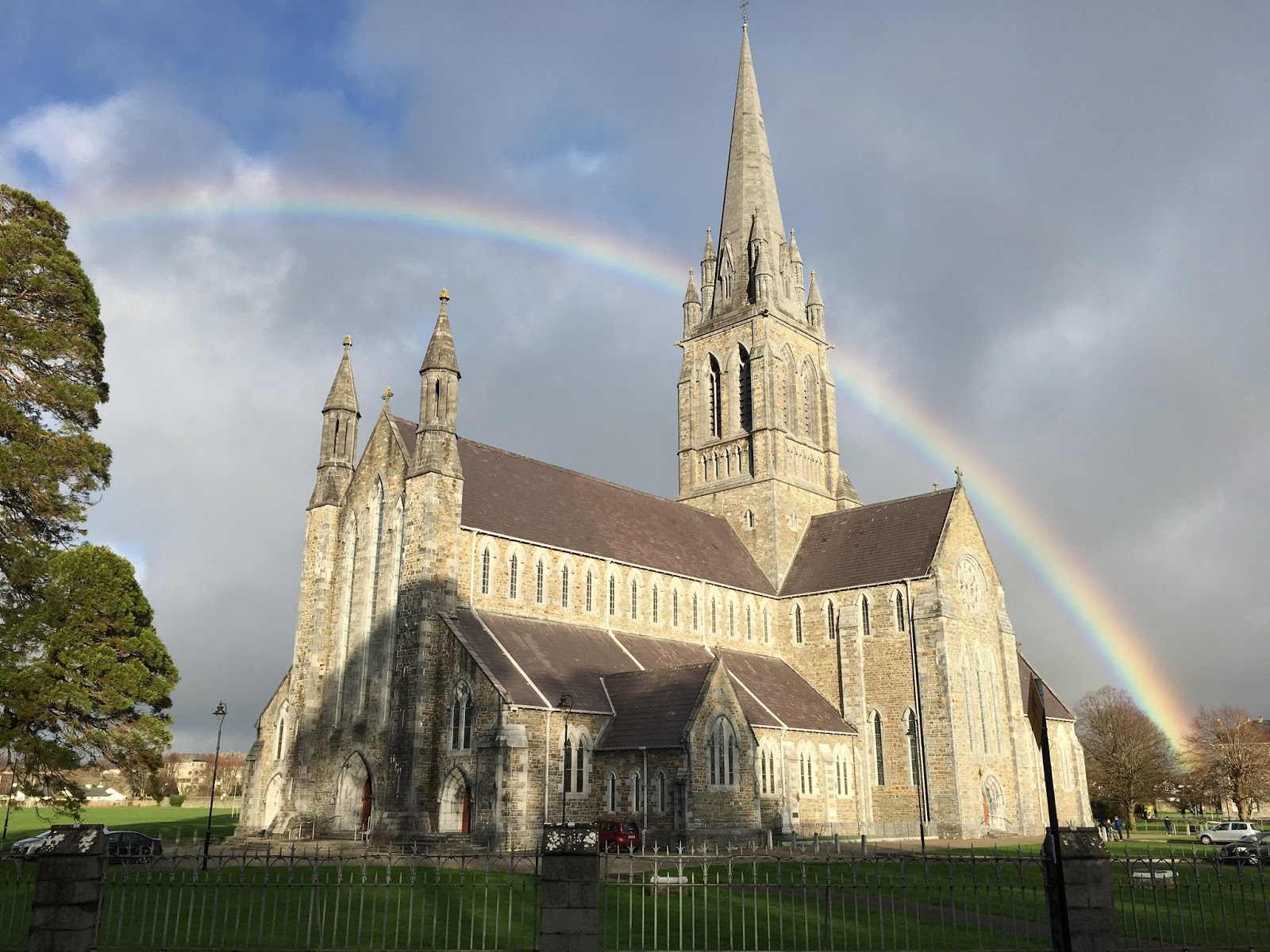 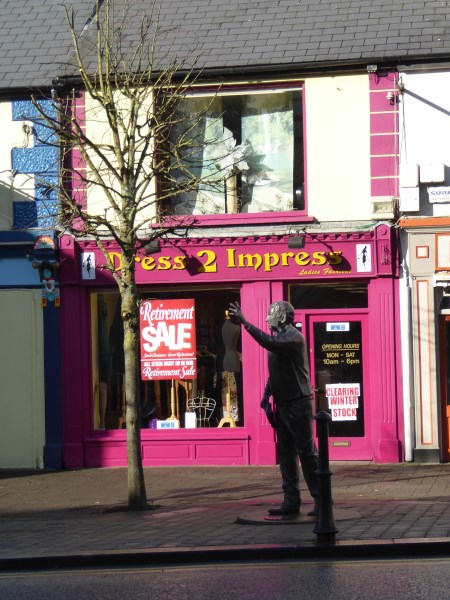 This fashion shop which has been dressing North Kerry ladies for over twenty years is soon to close. When it does, Danny’s Hair and Beauty will relocate across the street. 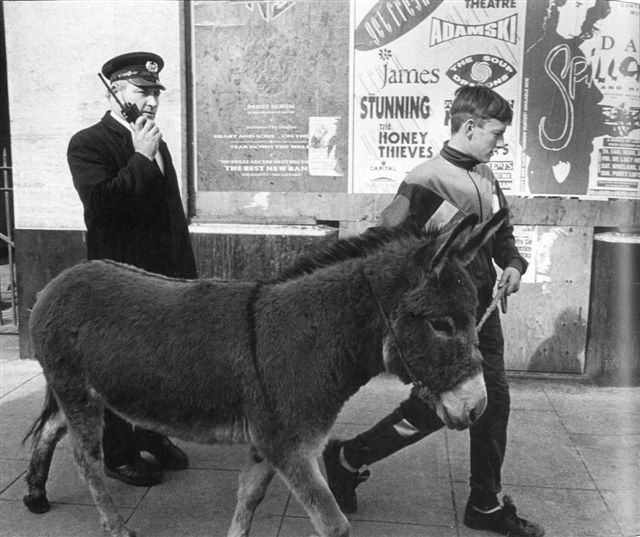 The man on the left on the phone is Mattie Lennon, a great friend of Listowel and a contributor  to Listowel Connection.

The year is 1996 and the photo was taken on Bachelors’ Walk. The uniform is that of of a bus inspector.

Mattie does a spot of writing and he has sent us this essay for our entertainment.

Long before DeValera expressed his dream of “comely maidens and athletic  youths at crossroads” young people held crossroads dances at Kylebeg in the West Wicklow of my youth. At the time it was the equivalent of Facebook or Dateline.

There was the occasional “American Wake” ‘though not described as such in our part of the country. And during the twenties and thirties there were also a number of regular dancing houses; usually dwellings with flagged floors and one or more eligible daughters. The small two-roomed home of John Osborne was one such house. Situated at the hill ditch, which divided the common grazing area of “The Rock” from the relatively arable land. There was no road to the house. . It was accessible only through the aptly named Rock Park; the nocturnal negotiation of this field a feat even for the most sure-footed. This had one advantage; when the Free State government introduced the House Dance Act of 1935 which banned dances, dancers and musicians. You had to get a licence to hold a dance, even in your own house. They came up with a moral argument against dancing and ,if you don’t mind, a sanitary facilities argument. But as one commentator said, at the time, the Government don’t care if you make your water down the chimney as long as they get their money. But a breach of the law could result in a court appearance and penalty.

However there was no danger of a late night invasion of John Osborne’s by any Government Inspector. Because even the most dedicated servant of the State would not risk a nightime ambulation through the Rock Park. As the shadows jumped on the whitewashed walls and the lamplight flickered on the willow patterned delph an official invasion was the furthest thing from the minds of the revellers.

John Osborne,  the man of the house was an accomplished flautist. Did he, I wonder, favour saturating his instrument, like, Neddy Bryan, the flute-player from Ballyknockan,   who on arrival at a session would request the facility to “….dip me   flute in a bucket o’ water”. According to the older people, Neddy Bryan, when he was a young man played the Piccolo . . . that is . . . until the local schoolmaster informed him that the name Piccolo came from Piccolo Fluato, the Italian for a small flute. “I’ll be damned,” says Neddy, “ if I’m going to be called the fella with one of thim things.” and from then on he concentrated on  the  CONCERT FLUTE. Neddy was a fair enough flute player but John Osborne would get so engrossed by certain tunes that he would go into a sort of a trance.

One night he was after playing a tune called High Level (Now . . .if I was sworn I can’t remember if it was a jig or a reel). Anyhow, one of the boyos says to him, “Do you know that your daughter is abroad in the haggard with Jimmy Doyle?”

Dancing wasn’t the only thing that went on in such houses. Now . . . now . . That ís NOT what I’m talking about. If you’ll listen for a minnit I’ll explain. If John  Osborne was alive today he would be described as eccentric. Well . . . I suppose he wouldn’t . . He was a poor man and you have to be well off to merit the euphemism “eccentric”.  Anyway , he was a bit odd but could have some very practical, if unorthodox solutions to certain situations. I’ll give you an example. One night a visiting dancer; a fine young fellow who had the book-learnin’ was going the next day for an interview with a view to joining the Garda Síochana. Opinions were divided as to whether he was of the required height. Until a horse dealer, a relation of my own, stated with some authority,

“That man is not the full eighteen hands high.”

A stone cutter who only lived one field away went home and returned with a six-foot rule. And sure enough the prospective polisman proved to be half an inch short of the required height. What was to be done?. This was before the era of “brown envelopes” and anyway times were poor. John Osborne hit on a plan. When the dancers back was turned he dropped his flute and with the maximum alacrity picked up an ash-plant. Almost before the pause in the music was noticed he gave the young man a belt of the stick on top of the head. ‘A fellandy” it was called up our way. The man in question had a good thick head of hair and the resulting bump brought him up to the required height.

He made a good Guard but ever after, in our area anyway, he was known  as “lumpy head”. There were some colourful nicknames around our place, one young male patron of Osborne’s was known as ‘you’ll have yer ups an’ downs”. You are going to ask me how anyone could end up with such a cumbersome handle. Well . . . I’ll tell you. It was inherited- like a peerage. His father, as a young man had met a girl at a house-dance, a few miles away. Her parents were dead and she had returned from the US of A and, of course, had a few dollars. And . . . she was an only child, into the bargain and . . had  inherited a good few acres. Me man played his cards well and told her a few stories that wouldn’t exactly run parallel with the truth. Anyway, to make a long story short, the relationship blossomed and they got married. He was a steady enough lad . . . he had a few head of cattle . . . five or six. But . . . he had five brothers and each of them had a good few cattle. . . which he borrowed for the occasion. ( In modern banking parlance such a move would be described as “an artificial boost”) The new bride must have thought she was back in the land of extensive ranches when the herd was installed on her little farm. There was shorthorns, Friesians, whiteheads and a couple of Aberdeen Anguses. Needless to say, for the first few mornings after the wedding the young couple didn’t get up too early. But one morning when the new bride arose from the marriage bed she noticed a reduction in the herd. One of her brothers in law, under cover of darkness, had repossessed what was rightfully his. When she pointed out the loss the spouse his only comment was “you’ll have your ups an’ downs” . “You’ll have yer ups an downs”. Every other night a similar  raid would take place as each brother took back his livestock and every time the moryah innocent husband would say “you’ll have yer ups an’ downs”.

But I’m rambling. Nowadays I think they call it digressing.

I mentioned earlier about the practice of dipping the wooden flute in water. Well, whether for flute-immersion or not a galvanized bucket of water was a permanent feature on the stone bench outside Osborne’s door. And one June night when the boys and girls, (a term used to describe those unmarried, and under 70) having made it relatively unscathed through the Rock Park, were knocking sparks from the floor. They  were glad of the opportunity, amid the jigs and the reels (and God only  knows what other energy-sapping activities) to exit occasionally for a   refreshing draught from the Parnassian bucket.

At day-break, while preparing to depart, the exhausted assembly was informed by a youth (who was looked on locally as “a sort of a cod”) of  how he had suffered during the night with a stone-bruise on his big toe. The pain, he  said, would have been unbearable but for the fact that; ” I used to go out now an’ agin an’ dip it in the bucket o’ water”.

The Joy and Camaraderie of Volunteering 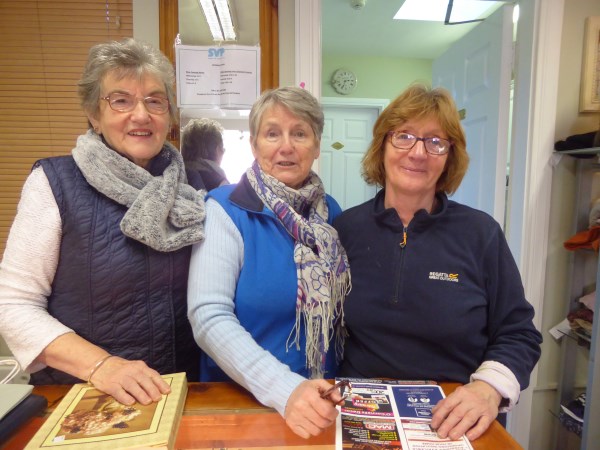 Lovely customer assistant volunteers in Listowel’s St. Vincent de Paul shop on Friday Feb. 1 2019. the atmosphere in this shop is always so warm and welcoming, and they have some lovely  new and pre loved stuff for sale.

A Great Weekend for Kerry People 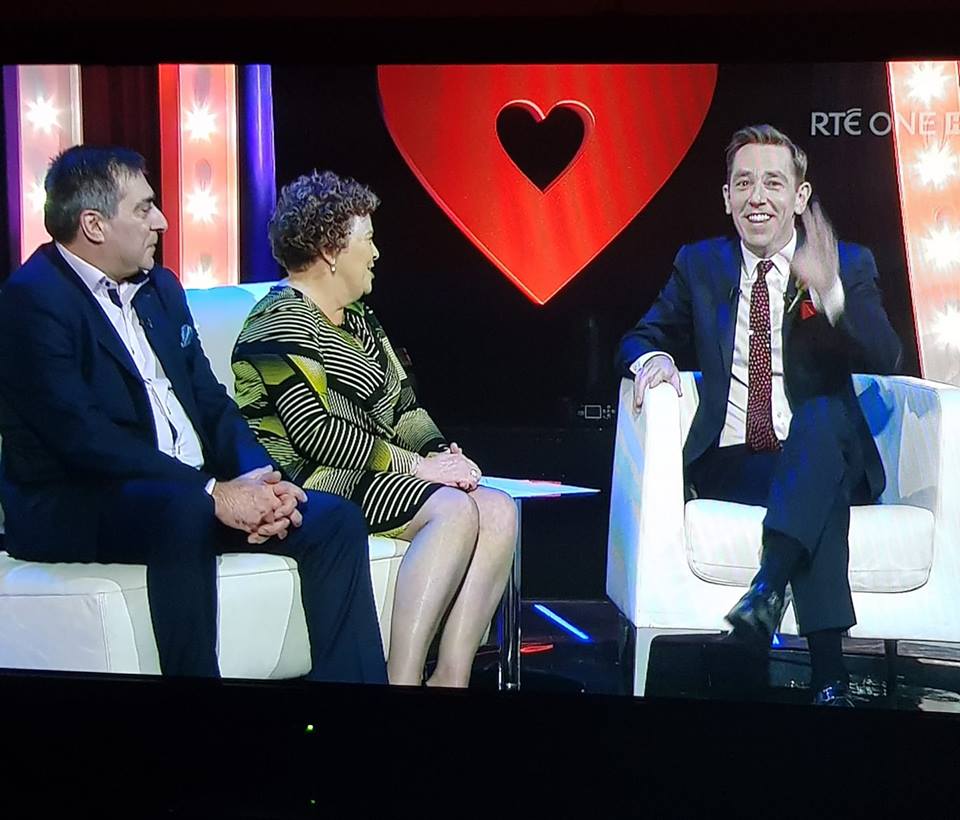 On Friday evening Feb. 8 2019 Namir and Kay Karim were invited to the Late Late Show to tell their story of enduring love and their triumph over adversity in their determination to be together.

You’ve read the story on Listowel Connection before but it was lovely to see them tell it to a national audience. They conducted themselves with decorum and dignity in a giddy environment. what a couple!

If you are in Ballybunion be sure to call in to Namir’s, a lovely place to eat. 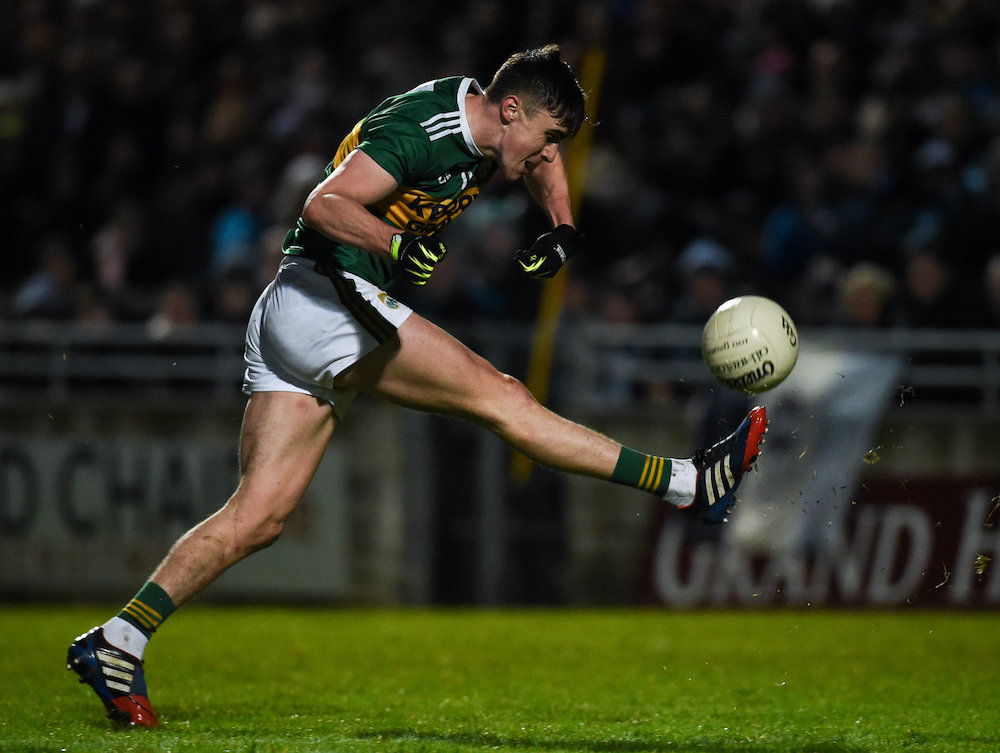 It was a great weekend for football fans. Every Kerry victory gives Kerry people a lift. A victory over Dublin is always extra special.

And to add to the pleasure two Kerry clubs won their own All Ireland finals so all in all a weekend to remember.

Tennis in the Rain, Advice for Emigrants and Discount shops in Listowel

Tanavalla House, Tennis and a Hugeonot prisoner with a Listowel Connection