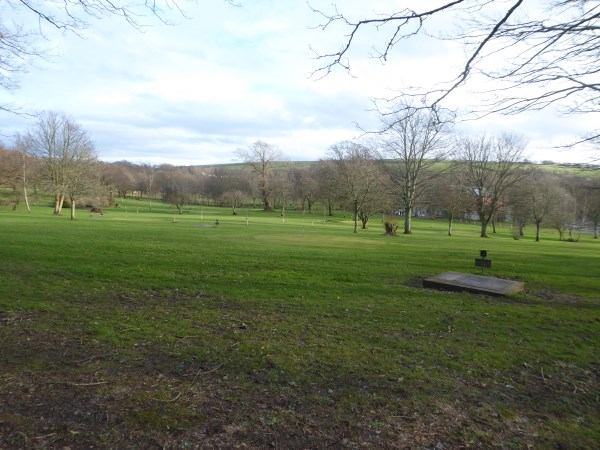 Listowel Pitch and Putt club now maintains a course in the Cows’ Lawn.

This  was the location of much controversy 100 years ago.

One hundred years ago this week, a
remarkable event took place in Listowel.   A courageous action by a
group of leaders in the town, armed only with hurleys, struck a non-violent
blow on behalf of the people of the town to be masters of their own destiny, and
to ‘walk their own land’.

The
event itself was the ploughing of the Cows Lawn, the property of Lord Listowel
which was eventually to lead to the provision of probably the best loved
amenity in the town  –  the present Town Park.

While
a group of people ‘ploughing’ might seem a harmless enough activity, this
ploughing was anything but harmless.  It led to a number of clashes
and confrontations between the police and a number of local men, thirteen of
whom were sentenced to 12 months in Cork and Belfast Gaol

To
understand what a momentous occasion it was we have only to see the headlines
in The Kerryman the following week: 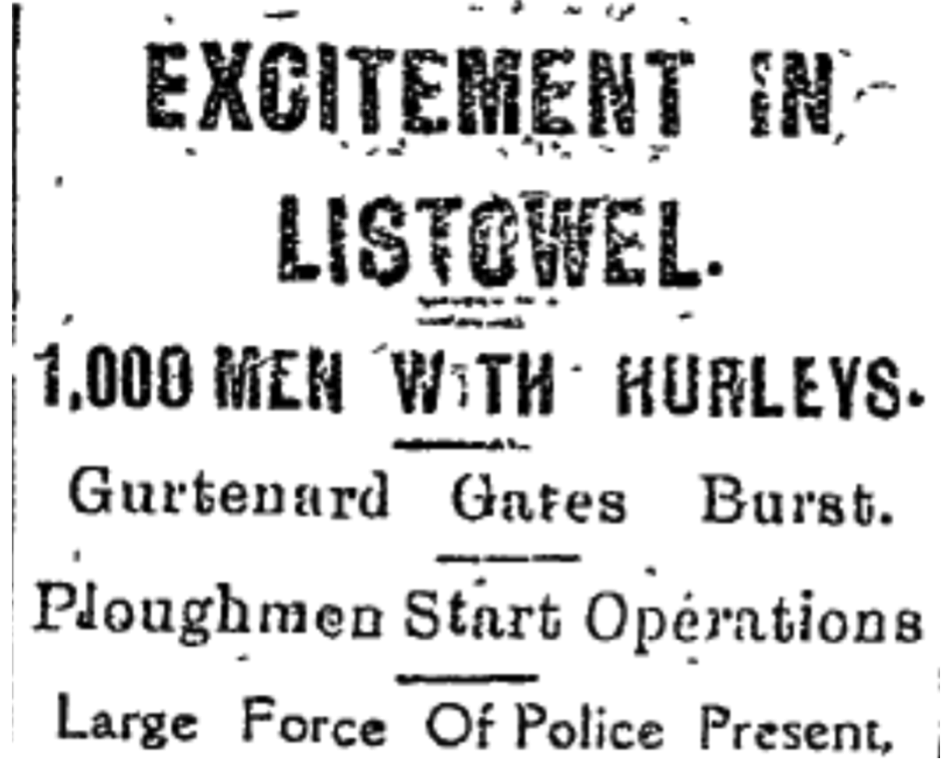 As World War I raged,
shortages of food and rising prices in 1917 started to cause distress  in
the town.   The British Ministry of Food set up a food control
committee for Ireland on 31 August 1917 and many of its regulations, in theory,
applied to this country.    Sinn Féin established Food Committees
throughout the country and started to organise local markets, distribution of
local food at fair  prices and  arrangements for the poor
of the town to get small areas of land or allotments to grow their own food.

In
February  1917, Listowel Urban Council Chairman Jack McKenna had been
involved in a fruitless exchange of letters with Lord Listowel looking for
permission to use 15 to 20 acres of vacant land

to be distributed
among ‘artisans, labourers and small traders of the town … on which they could
raise food to supplement their small earnings’. While a number of small
unsuitable fields had been suggested, these were not acceptable to the Urban
Council.

The two fields
identified as the most suitable for the purpose were  called at the
time the Back Lawn and the Front Lawn . These fields were at that time leased
from Lord Listowel by two local men and ‘negotiations’ were opened with them to
give up their tenancies.  John Keane held the front lawn and was
willing to give up his tenancy.’Mr Keane was prepared to forego his right for
the purpose of enabling the Council to proceed with the scheme, provided that
Lord Listowel was satisfied’.

Mr.   Kenny
who had the grazing of the back lawn was not keen to give up his title. He had
a butcher shop – it was absolutely essential to enable him to carry on his
trade as a butcher in the adjoining Church St., however he was persuaded to ‘do
the right thing’.

On 25th February 1918, tired of
waiting for permission, the Sinn Féin Food Committee with the help of the Irish
Volunteers from Moyvane, Knockanure, Finuge, Rathea, Ballyconry and
Ballylongford marched into the town ‘all armed with hurleys and headed by
bands, while ploughs and horses brought up the rear.  They were
cordially received by the Listowel Company of Irish Volunteers with their brass
band.  The whole procession, composed of some eleven or twelve
hundred Volunteers, marched to the estate office in Feale View at 1.30 o’clock
where the above mentioned waited on Mr. M. Hill, who is Lord Listowel’s chief
clerk’.

Although Messrs.
Kenny and Keane had given up possession, Mr Hill refused to hand over the keys
as he had not got orders from Lord Listowel. The Volunteers then broke open the
gates leading to the back lawn near the National School house.  The
ploughs and ploughmen started operations and another section  of
Vounteers took over the front lawn.  Over the following two months,
local people continued with tilling the land despite visits from the R.I.C.,
and the threat of court proceedings which culminated in the imprisonment of
thirteen of the ‘offenders’ in Cork and Belfast Gaols.

This was just the
start of an endeavour that
fifty years later culminated in the acquisition of the two lawns  for
the people of Listowel.  It had taken from the twelfth century,
firstly  with the Fitzmaurices and then with earls of Listowel as overlords,
to put the lands back into the hands of the people of the town.

An illustrated talk on
the full history  of the Cows Lawn from this event onwards, entitled
‘Sinn Féin v. Lord Listowel 1918’ will be given by Kay Caball at
the Seanchaí on Sunday 22nd April 7pm.

Today’s love poem is a favourite with teenagers.

Remember the time you lent me your car and I dented it?

I thought you’d kill me…

Remember the time I forgot to tell you the dance was

formal, and you came in jeans?

I thought you’d hate me…

Remember the times I’d flirt with

other boys just to make you jealous, and

I thought you’d drop me…

There were plenty of things you did to put up with me,

to keep me happy, to love me, and there are

so many things I wanted to tell

you when you returned from

People I Don’t know with a Motorbike 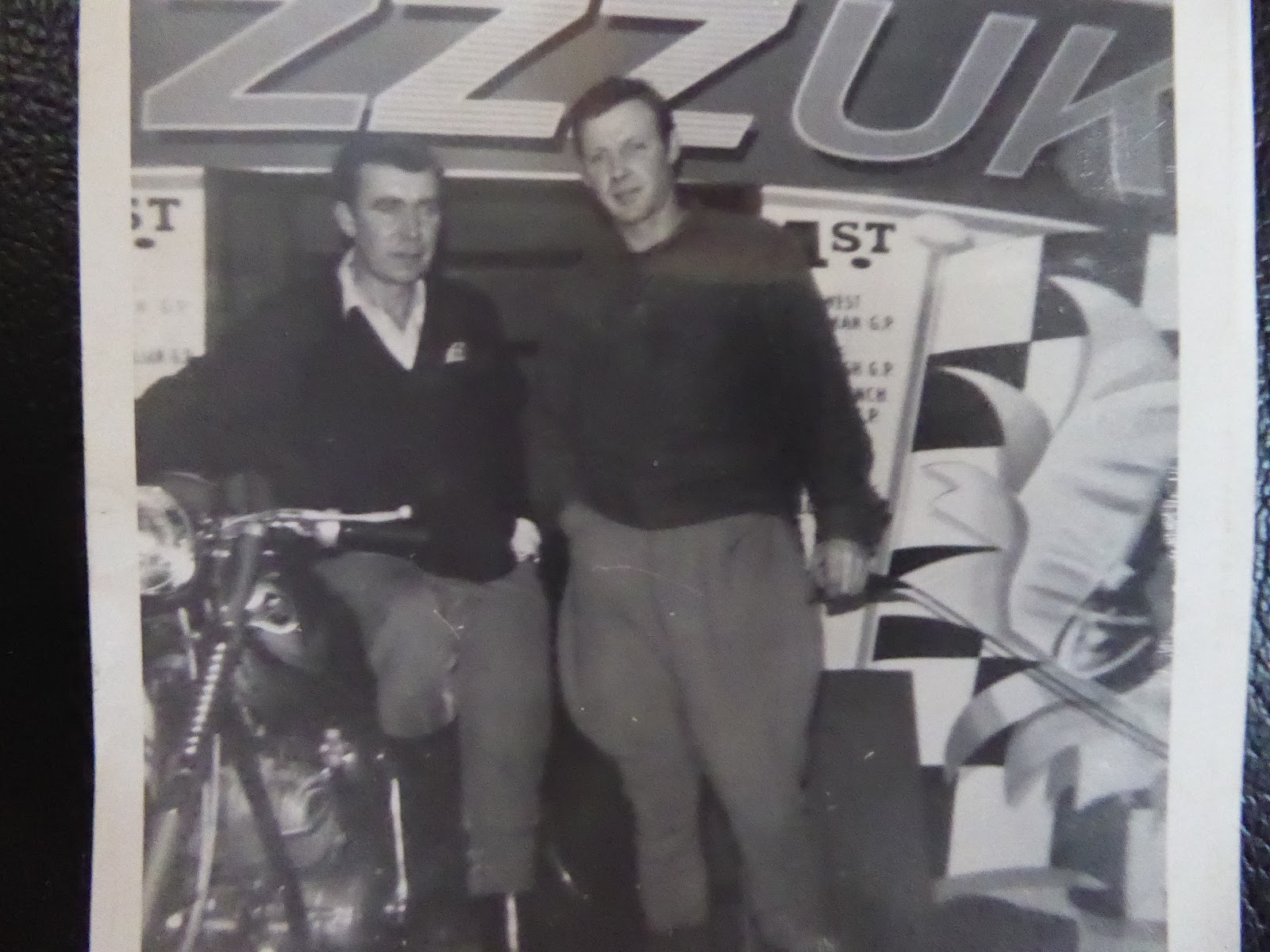 From the John Hannon archive

In Case You haven’t Booked yet

Tickets are selling fast for this John B. Keane classic in St. John’s 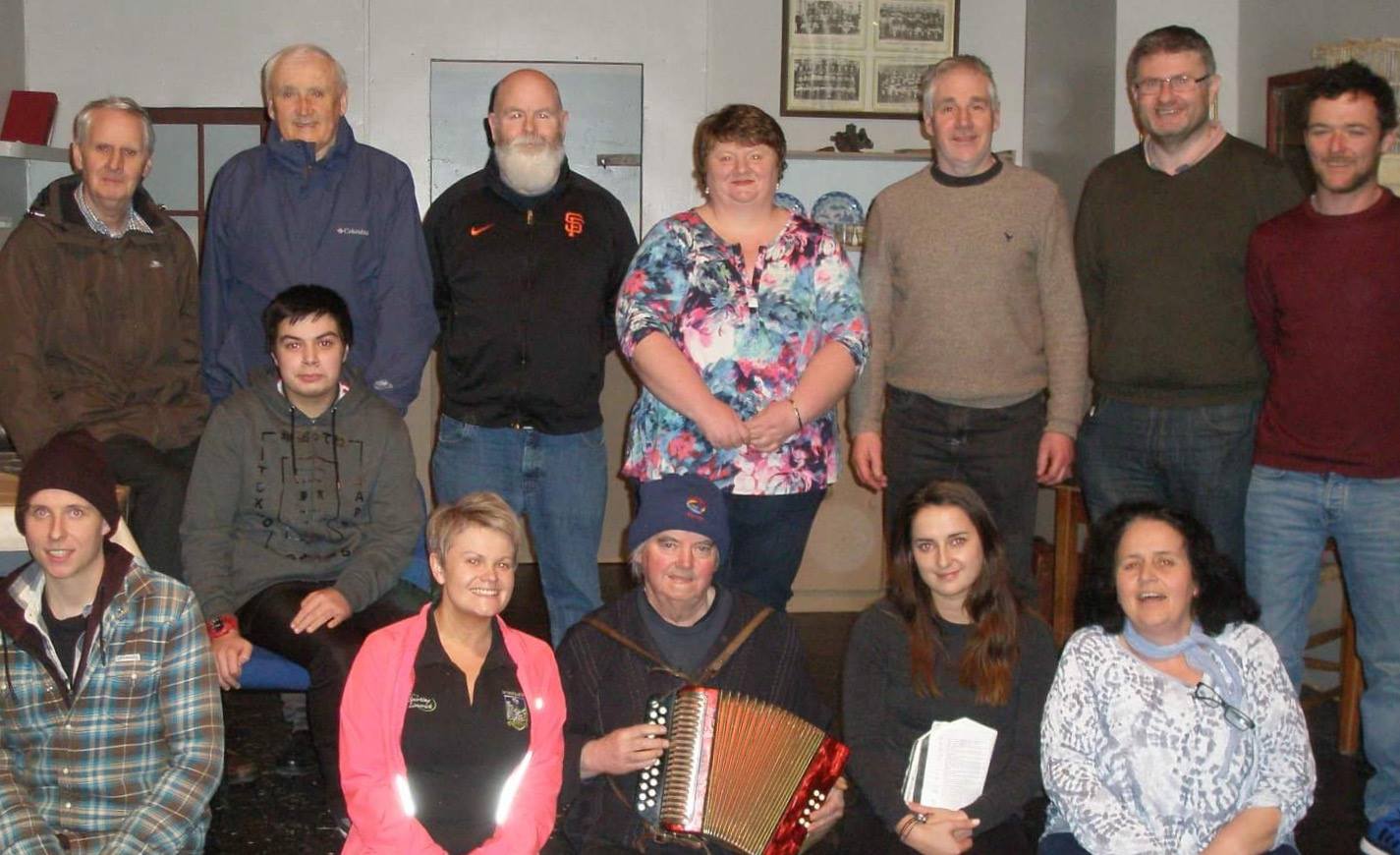 Many Young Men of Twenty opens on Friday April 20 2018