A Gigantic Purty in The Square in 2020 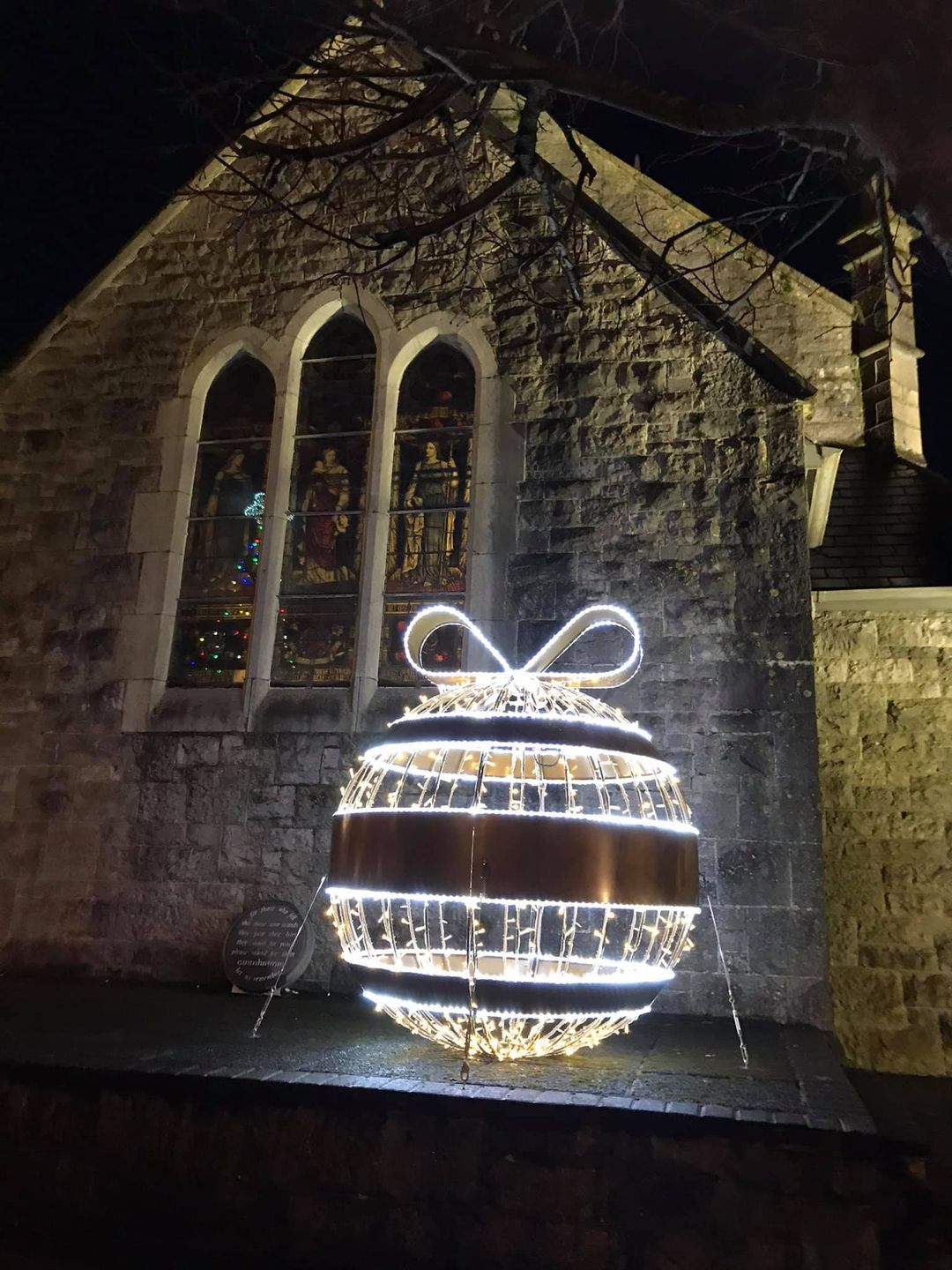 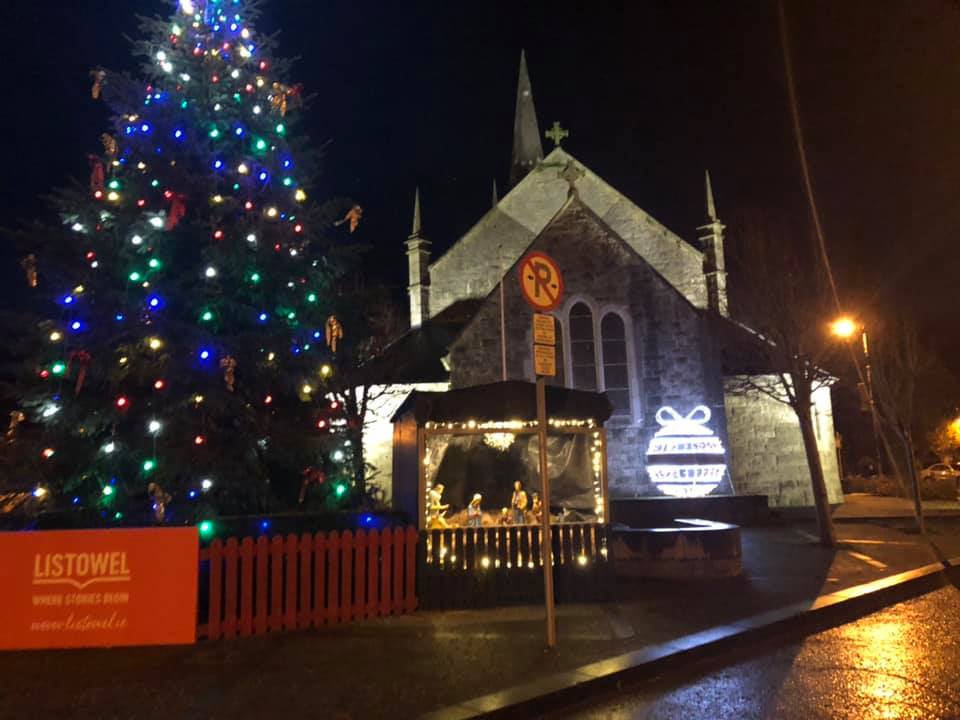 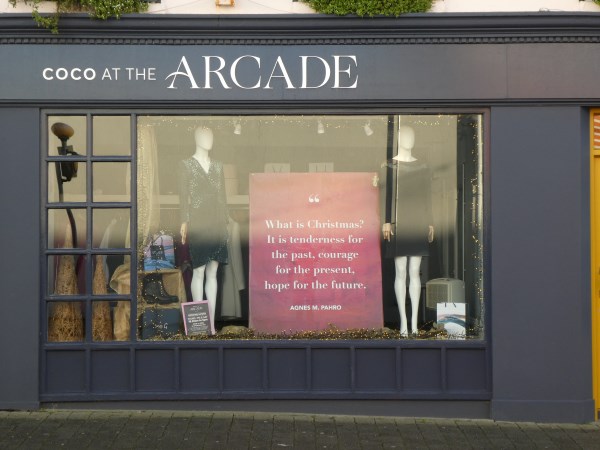 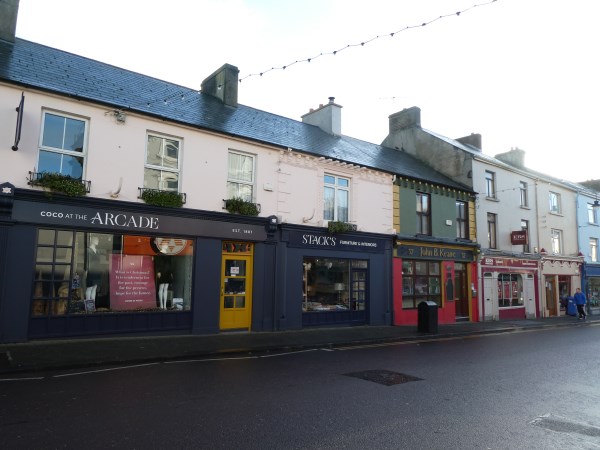 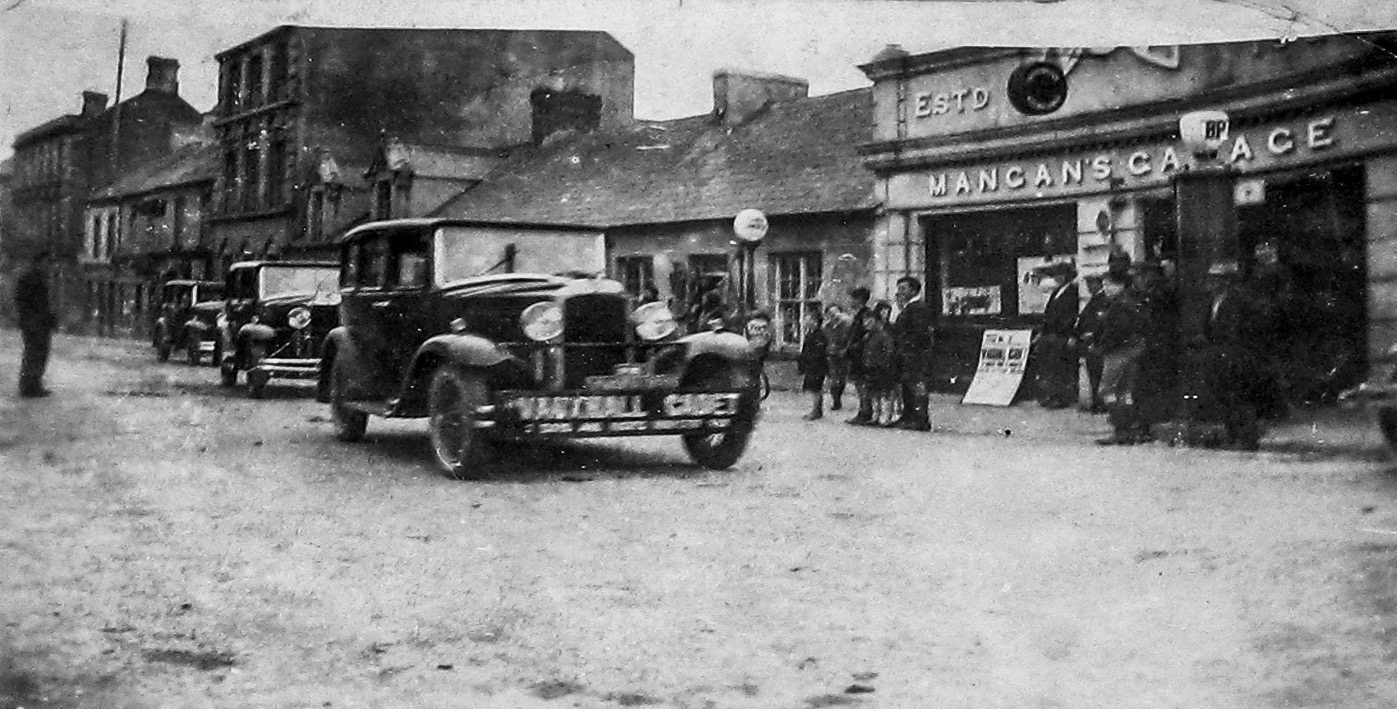 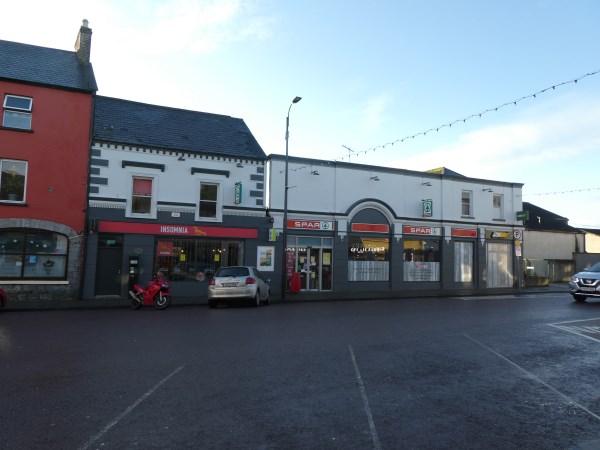 Martin Moore has set me straight

The photo of Mangans garage is fab. While this is headed ‘then and now’, the photograph is of the garage on William St. (Not Market St)

My father remembered Paddy Mangan, who was one of the heros of the ‘Troubled Times’ in north Kerry a century ago.

Paddy was from Kilfeighney in Lixnaw and went to America in the 1920s. He returned to Listowel and acquired the garage business. This previously was owned by the Galvins (still very much involved in business in Listowel) and subsequently by Dan Moloney)

Marie Shaw sends us another of her Christmas memories

So much time has gone by since I was young and carefree that  I hesitate to remember.

I was never a fan of Santa Claus, so I never wanted this man in the red suit come into my house while I was asleep. My mother wrote to him and explained this so he agreed to visit our house before I went to bed.

He usually visited me at my grandmother’s house since I always spent Christmas Eve there. My mother would be cooking a ham in the oven and the aroma of that ham would permeate the entire house. Back then, Christmas Eve was a Fast & Abstinence day so, there was no way that one could get a taste of that ham without risking going to hell for all eternity.

I also didn’t want Santa coming down the chimney, so it was arranged that he would knock on the door. My mother and my aunt would answer the door as I crouched behind my grandmother’s chair. They would hold a long conversation with Santa, thanking him for all the gifts and apologizing for the fact that I wouldn’t come to the door and thank him in person.

When I knew that he was long gone, I would investigate what he brought. There was always a book which I later realized was my uncle’s present. I remember a toy telephone, it was pink and a toy tea set which I loved. I doubt that I got all these gifts in one year but memory fades with age. Back then, we didn’t write letters to Santa. Whatever he brought us was what we got.

The kitchen was decorated with colored streamers and a large white paper bell at the center.

The Crib usually had it’s place on the window sill with the long red or white candle burning on the table in front of it.

The treats that were set up in the sitting room were what were incredible to our generation.

Sherry, whiskey, Guinness, lemonade, biscuits in a box, chocolates in a box, Christmas cake and trifle for the Christmas dinner.

As long as I live, I will always remember the excitement of not only Christmas Gifts but Christmas cheer, Christmas love, Christmas peace. Golden days!

This lovely Christmas reminiscence brings me to the topic of Santa and his spies seeing you when you are sleeping and awake. It seems that many children have a dread fear of being constantly watched and judged by Santa. The idea of a strange man coming into a child’s bedroom under the cover of darkness (even if and maybe especially if, he is bearing gifts) is the stuff of nightmares.

Like Marie, Stefanie Preissner in her autobiography tells of a horror of Santa prowling into her bedroom. Stefanie wrote to him herself assuring him she had been good and asking him not to come into her bedroom please.

This brings me to the recent “tradition” of Elf on the Shelf.

If you dont know this one it involves a naughty elf coming in for the month of December and every night while the house is sleeping he gets up to some naughty jape. 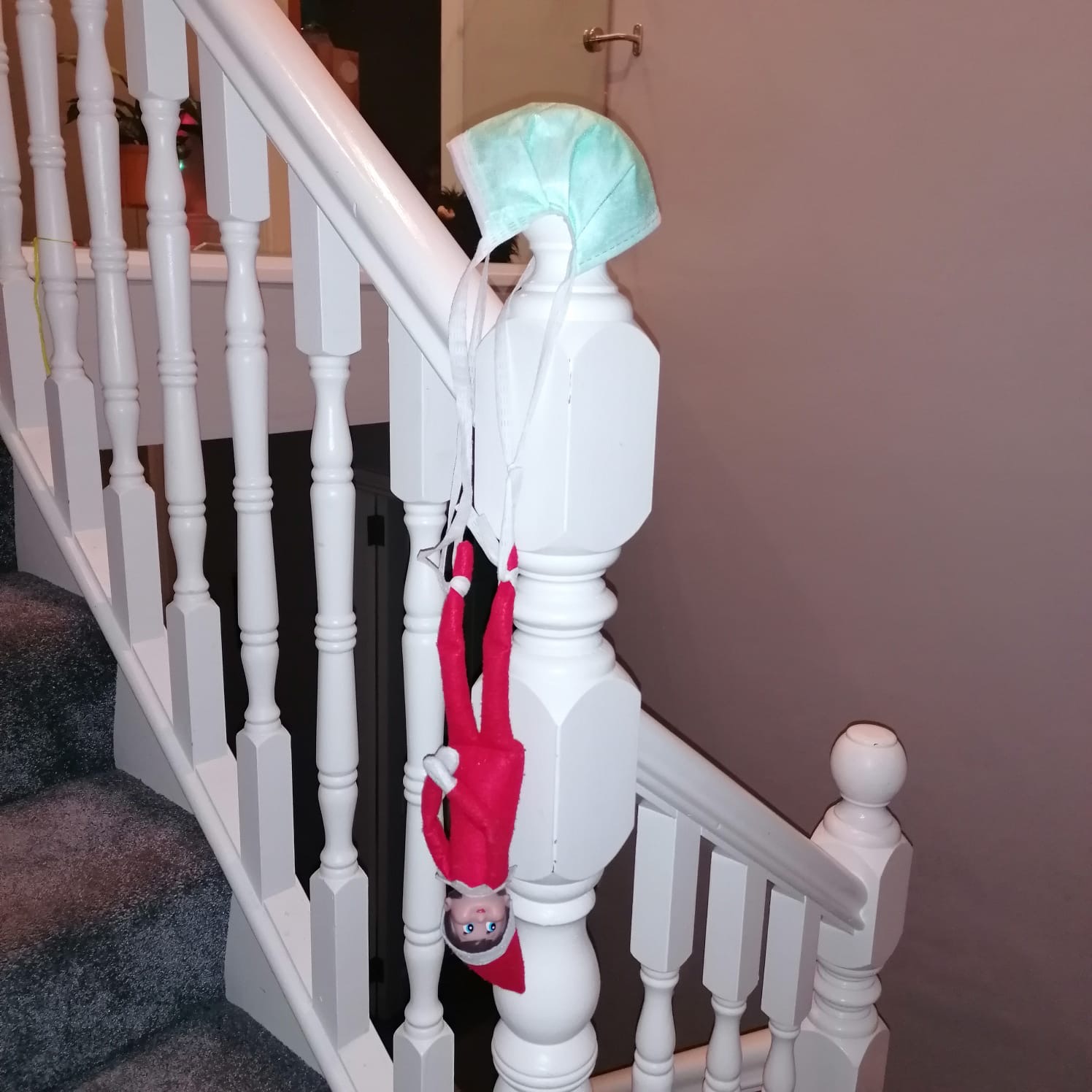 This year on December 1 he parachuted in on a face mask to a house I know. 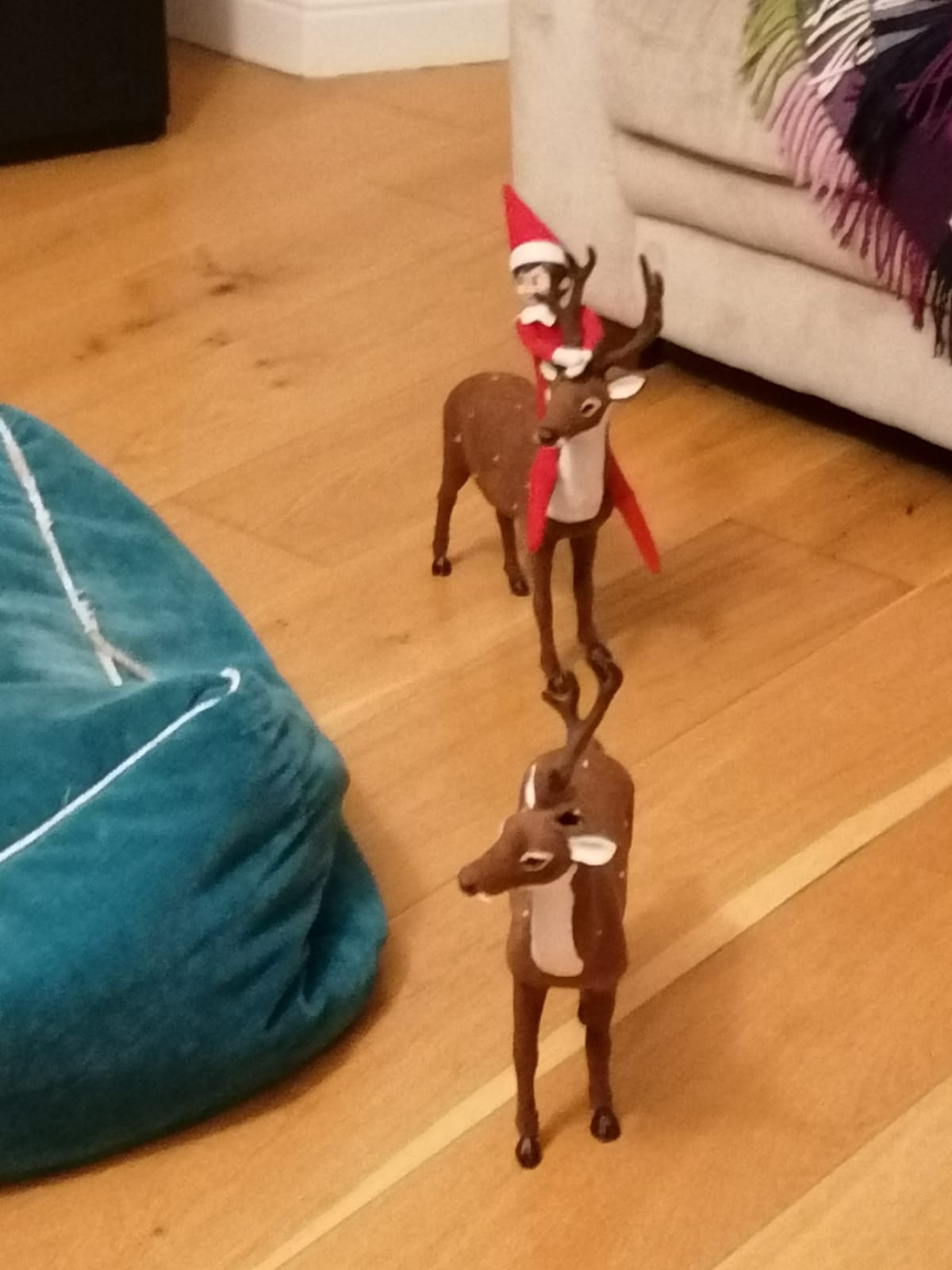 This house would be familiar with  horseriding so it was no surprise to find the Elf discovering his inner jockey. 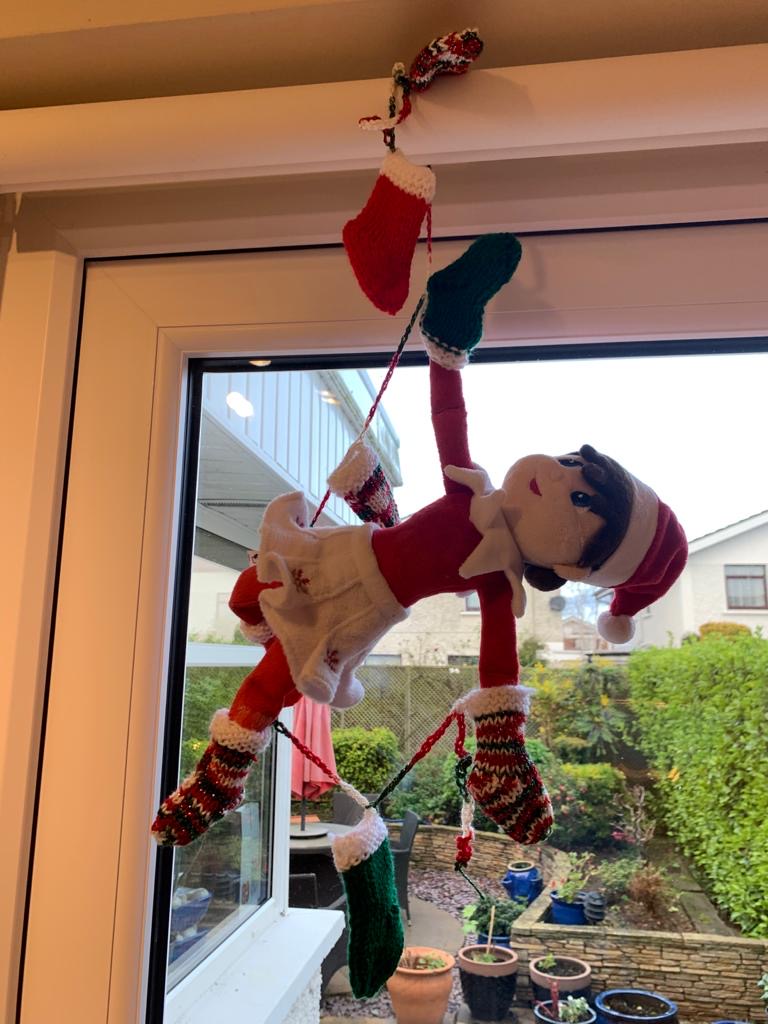 In the home of my Dublin family, their elf discovered my hand knitted garland and tried on the socks as he swung from the curtain pelmet.

All of this is great fun and will, no doubt, feature in these children’s Christmas memories in 50 years time but there are children who are totally spooked by the idea of a bold otherworld spirit taking up residence in their house and doing things that should get one in big trouble. 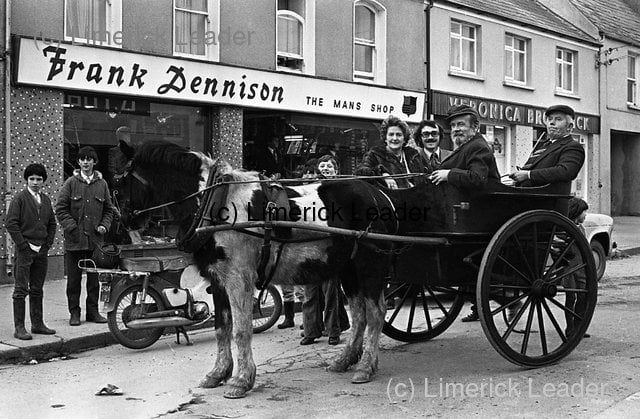 This photo from The Limerick Leader turned up recently on Facebook. In the horse and trap are some of the cast members of the RTE soap opera, The Riordan’s arriving in Abbeyfeale in 1973 to officially open Frank Dennison’s shop.

Jumbo’s, A New York Obituary and The Christmas Coat