You can shed tears that she is gone
or you can smile because she has lived.

Your heart can be empty because you can’t see her
or you can be full of the love you shared.

You can turn your back on tomorrow and live yesterday
or you can be happy for tomorrow because of yesterday.

You can remember her and only that she’s gone
or you can cherish her memory and let it live on.

You can cry and close your mind, be empty and turn your back
or you can do what she’d want: smile, open your eyes, love and go on.

We gave Mary Doyle a great send off on Friday. I have never before been at such a funeral. In the funeral home, we had music, songs, poems, eulogies and lots of dancing. The moving sight of Jimmy Hickey’s dancers dancing a last waltz for Mary will remain in the memories of all who were there to see it.

Mary’s remains were accompanied to the graveyard by her family, friends and neighbours. Her hearse was flanked all the way by a guard of honour of members of her beloved MS Society, many in wheelchairs, braving the biting cold.

Mary was laid to her final rest to the haunting sound of Anne Hilliard’s beautiful voice singing a lament.

Everyone’s abiding memory of Mary is of a woman of great kindness and unfailing good humour.

“Mary would give you half her heart.” That says it all. 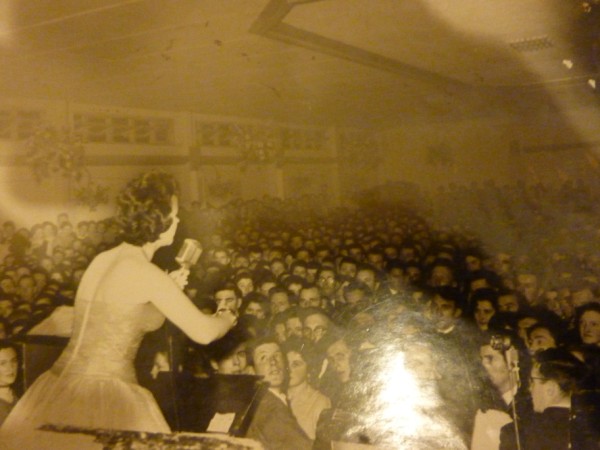 Vincent unearthed this great photo of Bridie Gallagher, “The Girl from Donegal” in her hey day performing in Walsh’s Super Ballroom, Listowel. Some crowd turned out too see her!

Savour this from Radio Kerry!

Arthur Spring to return over 10,000 euro in expences

TD for Kerry North, West Limerick Arthur Spring says he’ll return more than €10,000 in expenses. The Labour deputy was paid over €52,000 in vouched expenses, putting him second highest in the list of how much TD’s claimed.

However, the first time TD says this position is inaccurate because he has confirmed he’ll send €10,000 back. Meanwhile Kerry’s five remaining TDs claimed over €185 thousand in unvouched expenses. Members of the Oireachtas are allowed to claim expenses up to a certain amount without specifying what these expenses are.

Under the Parliamentary Standard Allowance, Ministers, Ministers of State and the Ceann Comhairle are not entitled to the travel allowance. In all €6m in expenses has been claimed by all TDs since March. Tánaiste Eamon Gilmore says a new vouched system of expenses is now in place.

2 photos to raise the spirits