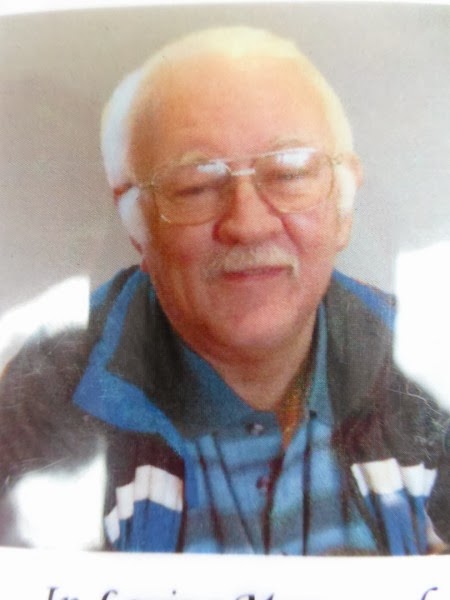 For me, Race Week 2013 did not have the same resonance as previous
years. Some weeks previous, news came through of the death of one of my closest
and lifelong friends, Michael Sheehy of Main Street, Listowel and Yonkers, New
York. Michael or Mike as he liked to be known, liked nothing more than to
return to his home town for race week accompanied by his wife and best friend
Mary, daughter Kerry and sons Patrick and John.

Even though he was lost to emigration, first to London and then to New
York in the early 1960s, he remained a true son of Listowel. A long time member
of the New York Kerryman’s Association, he was, over those emigrant years, to
the forefront when it came to organising and collecting for many fundraisers back
in his native town.

He was the second born of a family of five boys to Jack and Moira (nee
Madden) Sheehy who ran a small grocery and meal store.

Michael had his early education at the local National School, afterwards
St Michael’s College and the Listowel Technical School in Church Street where
he completed a commercial course. He often told me the days spent at the Tech.
were the happiest of his life as it allowed him to express his many footballing
talents at both local, on the schools senior football team, and nationally as a
key member of the Kerry Vocational Senior Team. He was a free scoring forward
on both the Listowel minor side who defeated a star studded Ballylongford team
in the North Kerry Minor Championship final of 1962 and the North Kerry team
which won the Kerry Minor Championship in the same year. He was also a
formidable player with the Listowel soccer team and could mix it with the best
at both tennis and handball.

Michael was a modest man who could see fun in most things and was never
afraid to have a laugh at himself; perhaps this is personified in the following
story which he liked recalling when we spoke. It was of a time in 1961 when
there was a revival of the Listowel hurling club. The senior team were due to
play Abbeydorney in a curtain raiser to the Kerry vs. Roscommon senior football
tournament game at Listowel on May 28th of that year. At that time a
crowd of 5,000 would attend these matches. The Listowel team had arranged a
workout game against Lixnaw in Lixnaw the Wednesday evening prior to the match.
At the game Listowel found themselves a man short and Michael, then 17, having
travelled as a spectator and never having played competitive hurling
previously, was pressed into action as goalkeeper. As he said himself, whether
it was luck or bad shooting by the home team’s forwards he kept the goals
intact, so much so after the game the selectors told him that he was picked to
play in goals the following Sunday.

Always the perfectionist, Michael spend every available chance the following
days down at the ball alley, alone, with a hurl striking ball after ball off
the back wall and catching the return, as he said, “getting eye co-ordination”

The following Sunday he made his début ‘as the man between the
posts’.  For five minutes, things went
fine, then, disaster struck, a high ball came sailing down towards his goals,
Michael lifted his camán and instead of catching the slioter went to bat it
tennis style, result, the slioter nestling at the back of the net, Michael
berated himself, “Why didn’t I catch it like I was doing down at the ball
alley?”. Worse was to follow. In the space of the next ten minutes four more
balls sailed past the Listowel custodian. Then followed  the humiliation of the keeper as he was
called ashore before the large crowd. As he left his goals, the goal umpire
sympathetically shook Mike’s hand and said, “You should have blocked two of the
goals” to which Mike sarcastically replied “I should have blocked the whole
bloody five.”

For the record Michael was replaced in goal by his great friend and
fellow Church Street neighbour, Tony Barrett. Since then, Michael humorously
would point to the fact that Tony was himself caught for three goals.

To his wife Mary, sons, Patrick and John, daughter Kerry and their
respective families, his brother’s Martin, Pat and Jerry we send our deepest
sympathy on their great loss.

Requiem Mass for Michael was said in St
Brendan’s in the Bronx. Michael is buried In The Gate of Heaven Cemetery
in Westchester.

Ní imithe uainn atá sé ach imithe romhainn, (he is not gone from us but
before us) 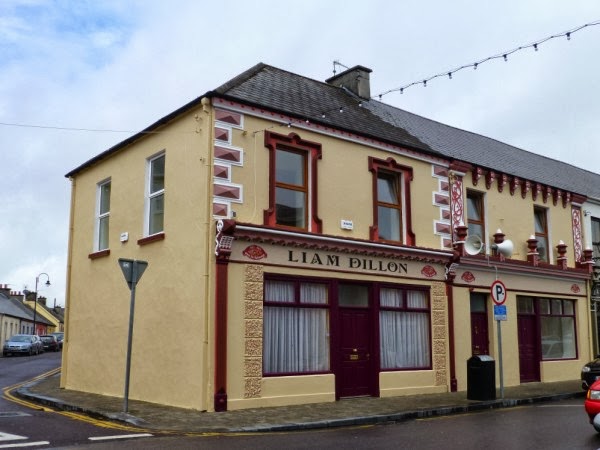 This lovely painting job was done by Chute Bros. of Listowel 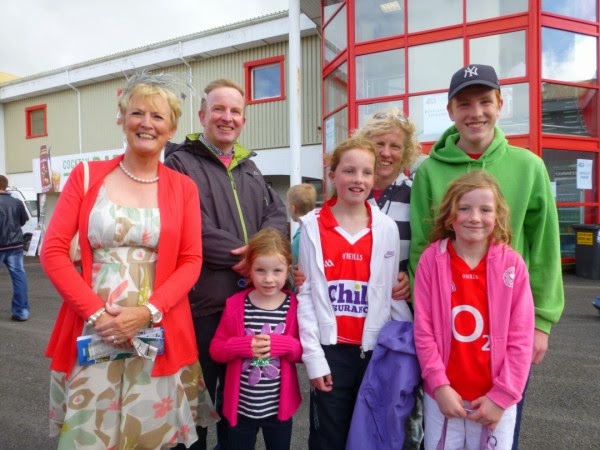 This family of Cork O’Sullivans were connecting with the Kerry side of the family at The Races.

From: May Gleasure, The Square, Listowel

A few lines hoping they will find you in good health, we were in a very bad state here for the last week, since the 28 August, father was under an operation on the 29th. the fillum of the bowls was coming out. On the night of the 28th he felt it coming on him about 12 oclock before he went to bed. He went to bed anyway and never raised any alarm and it got fearful bad with him in such a way that the doctor told him that it was a miracle or the will of God that he did not die although George was in the same bed with him he never said what was wrong with him for he used to get it before but he was able to put it back himself. About 7.30 next morning I went into him and asked him what was wrong and he told me he had great pains and that he was done for and was going to leave us, you may be sure that he frightened me. I said that I would go out for the doctor and he would by no chance leave me. I delayed about an hour and went out of my own accord & brought him in. and he saw it once that it was a very serious case. he went and got another doctor and my father had to force him to operate on him. they did it anyway and it has turned out successful so far, the fillum was 4 times its natural size and about the length of your finger of black diseased part, if it swelled the least bit more that it would burst. He was the strongest man that they ever came across to say that he did not die and the way he was in the night before. We have got a lovely doctor attending him his name is OConnor. he come’s in 4 or 5 times in the day and he would not let one of us do any thing to help him only does it all himself. only the way he is attending him we should have got a nurse, we sent out for my grand mother for we have to stop up with him every night since and can’t leave him for a minute by day. I think he will pronunce him out of danger tonight he is splendid now, the wound is all healed up almost. And he is taking lots of good nourishment but of course no solid food. For the doctor is trying to get the bowls to move first. Nobody is allowed to see him only Adam and a few more near relations like him. I was full sure that we would have to be sending for you when I saw the way he was. Hoping you will write as soon as you get this I remain Your loving Sister M.G.

Jer. Kennelly speculates that the Dr. O’Connor referred to is possibly Dr. Michael O’Connor who lived in The Square.

Jer tells me that Dr. O’Connor was  interned in Ballykinlar, Co. Down in 1920. 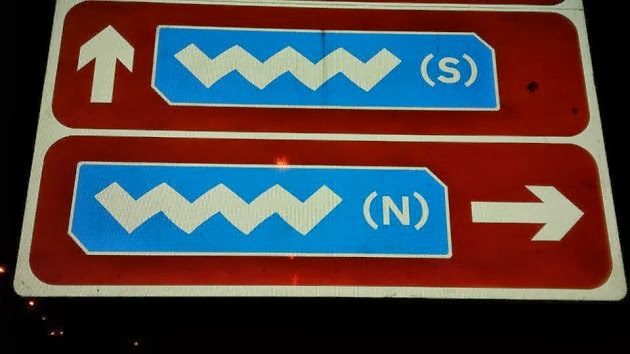 People are encountering these roadsigns in their travels around the country and have been contacting news media to find out what they mean. One helpful commenter on The Journal suggested that the signs meant  Kerry Drivers Ahead, another suggested “Collapsible Bridge Ahead and another, Drunken Caterpillars Crossing. One person suggested that the signs were in Kerry because only in Kerry are North and South not in polar opposite directions.

The answer to the puzzle is this. The signs refer to The Wild Atlantic Way, the scenic drive along the west coast from Malin to Mizen.