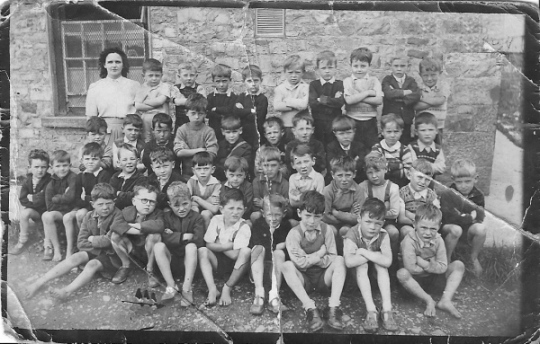 Again no names but there will be a few of you recognising yourselves. The year I had for it was 1968 but after my debacle with the last school photo and because some of the boys are barefoot, I’m not going to chance that until I am more sure. It looks older to me.  I love the tough stance, arms folded, no smiles. Bet you are smiling as you look at it today!

I’d love to include more of these photos, preferably with names, so if they are holed away in your drawers somewhere please share them with us.

Now today’s old news. Ger Greaney has been reading through archived newspapers and he found this for us. It relates to 1887 so I don’t think anyone will recognise themselves but maybe the story will have been retold in some house in Finuge in the recent past;

On March 25th, a numerous staff of bailiffs, protected by a

police under the command of District Inspector W.H.RICE, accompanied by

Lord Listowel’s Steward, Mr. SWEETMAN, proceeded to Finuge for the purpos of

evicting a farmer named James O’CONNELL for non payment of rent. When the

bailiffs arrived at the place there were only Mrs. O’Connell and her

children in the house, Mr. O’CONNELL being in town at the time. Mr. SWEETMAN

demanded possession. Mrs O’Connell replied her husband was not at home.

Bailiff BROWNE and his comrades set about their work. So roughly did they

hustle out the furniture and bedding that the bystanders, smothering their

feelings, actually assisted in removing the various articles of furniture to

save them from being injured. When the house was cleared, a caretaker was

put in possession, and two policemen left to guard him. When Mr. O’CONNELL

came on the scene the eviction was almost completed. When the police and

bailiffs left he found himself surrounded by his wife and children. He had

no place to shelter either himself or his family. He came into town and

asked the agent for a night’s lodging in the home from which he was evicted.

The agent refused. That night the caretaker took pity on Mrs O’CONNELL and

gave her shelter. The next morning the agent, Mr. FITZGERALD, met Mrs O’CONNELL,

and warned her that if she visited the house again he would prosecute her.

woman and her infant child. The neighbours, however did not leave her long

without protection. Mrs O’CONNELL is now sheltered and has a temporary home

under James MURPHY’S roof, and the children are scattered out amongst the