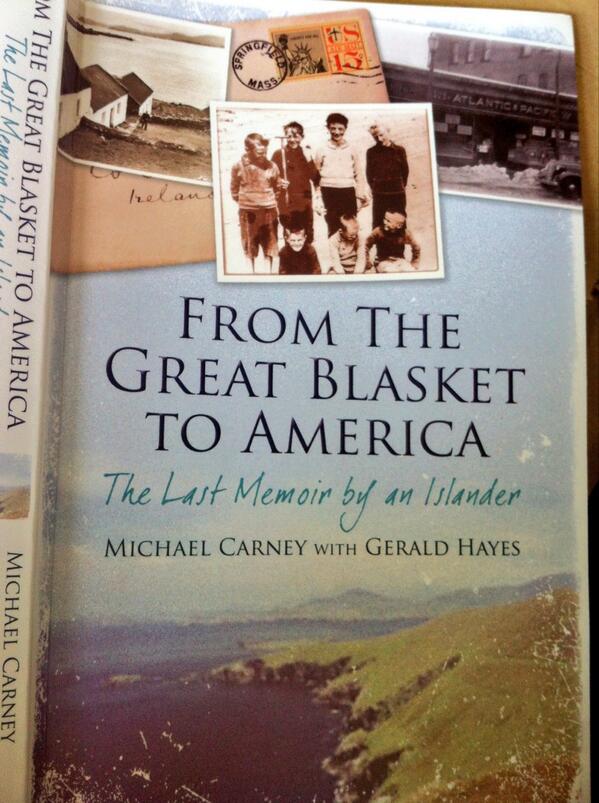 This book has been much in the news recently. The co-author, Michael Carney, is the last person born on the Great Blasket, the only inhabitable one of the 6 islands, to write an account of life there. The Blasket islands have been uninhabited since 1953. Only 10 native islanders survive and all are very elderly.

Michael Carney was born on the island in 1920 and lived there until he was 16.

I read a review of the book by Darragh MacManus and that review has spurred me to read the memoir itself. When Mike was growing up on the Great Blasket , the island people had no post office,  no shop, no car, no electricity, no phone, no running water, no church, no doctor or nurse, no horse, no proper roads, no machinery and no pub .  They literally had nothing.

It was the tragic death of Mike’s brother, Séanín, which led eventually to the complete evacuation of the last remaining 22 citizens in 1953.  In 1964 just before Christmas, Seainín ÓCearna contracted meningitis. The weather was too bad and the sea too rough to get him to the mainland or to bring a doctor from the mainland to him.  His preventable death and the subsequent delay in getting to the mainland for a coffin was the impetus the islanders needed to put pressure on the DeValera government to relocate them.

Mike says ” Some people cannot get the island out of their system. I think about it every day and still dream about it every night. I am an islandman at heart and will be until the day I die.”

People often marvel at how Listowel has produced so many writers. Even more extraordinary is the number of writers produced by one small isolated island off the west Kerry coast. The Great Blasket at its peak  had only 176 inhabitants in 1916.

The most famous of the chroniclers of life on The Blasket was Peig Sayers. 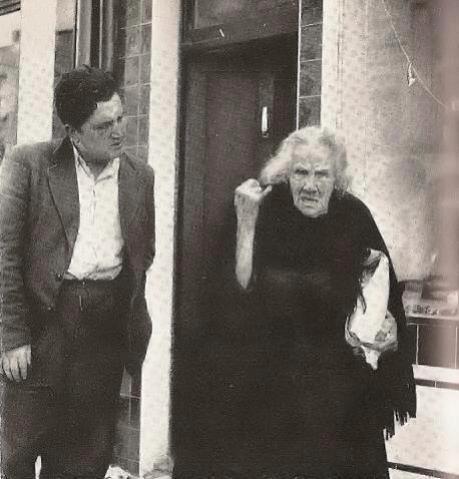 This rare photo of Brendan Behan and Peig was posted online by a Michael Murphy.

Recently I discovered that a Listowel family have a close family link with Peig.

In her biography, Peig describes 2 periods she spent “in aimsir”,  i. e. working as a servant girl. The first of these tréimhsí was spent  with a family in Dingle. Peig describes her time in the Curran house with affection. The bean an tí, her boss, was kind to her and  she loved the children, particularly Seáinín.

Now for the Listowel connection. This Curran family is the family of Anne Moloney of Cherrytree Drive. Unfortunately, Anne has no photo of herself with Peig since she was very young when Peig died, but she secured from another member of her family this photo of Peig with them. 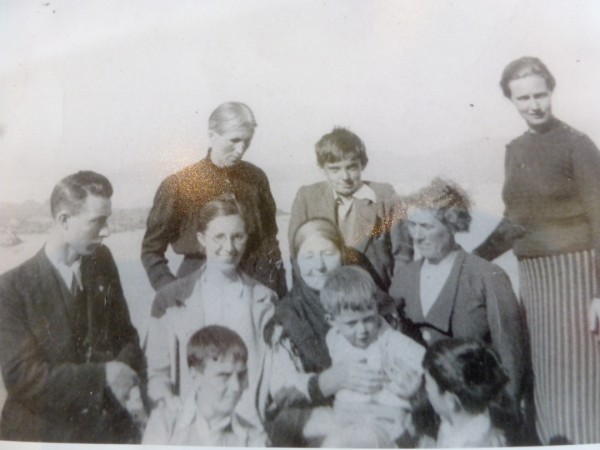 We’re not sure who the boy with his back to us is!

Since Anne was not born when Peig was in her family home, her memories of Peig are as an old lady. Peig Sayers spent the last years of her life in Dingle hospital. We know from her own account that Peig had “galar an tabac” and was once reduced to filling her dúidín (clay pipe) with tea when she was gasping for a smoke and no tobacco was to be had. But our Peig was no saint. She was also fond of a drop. Anne remembers being sent up to the hospital with a naggin of whiskey that some kind benefactor had bought in Currans for Peig. 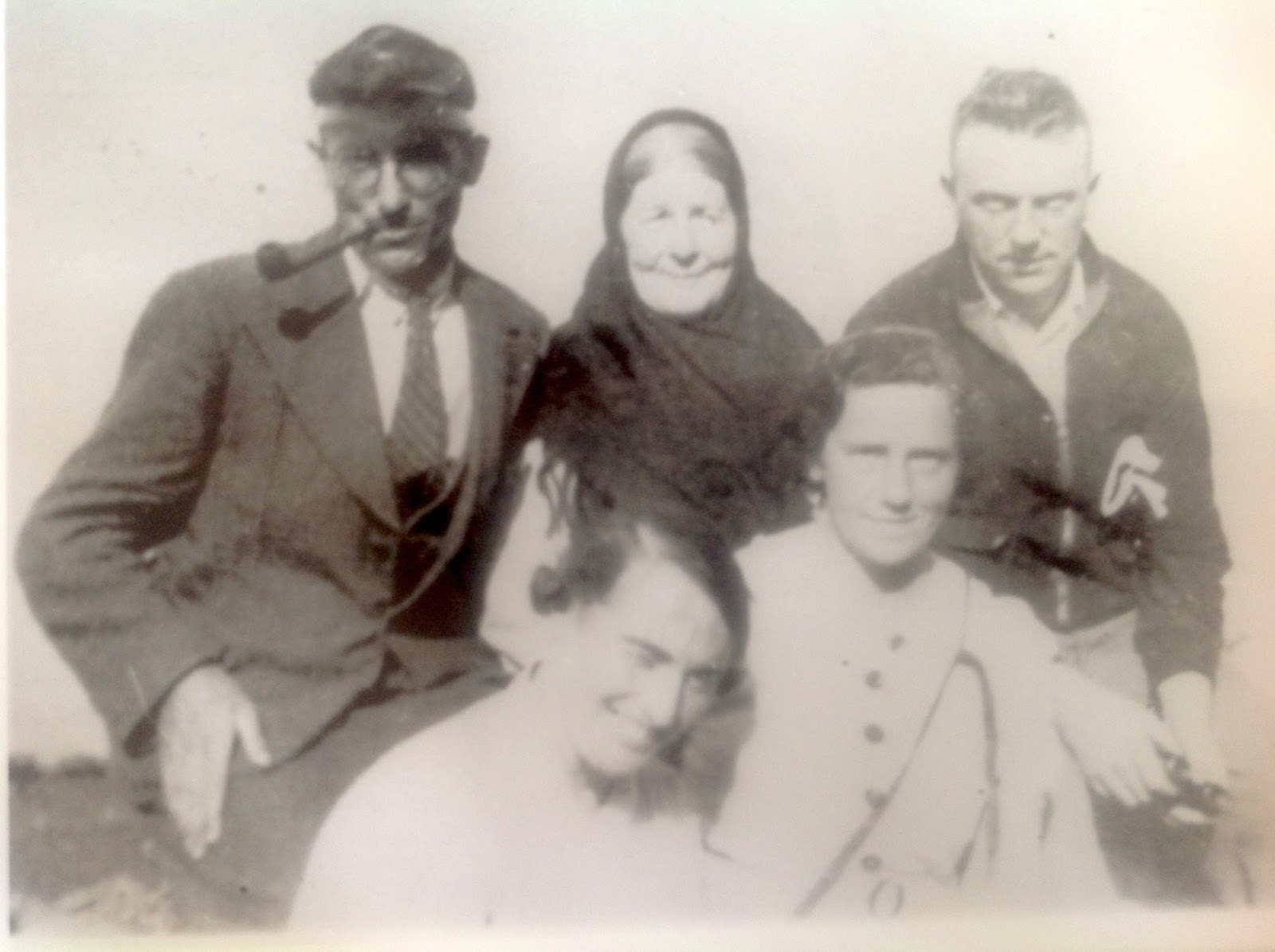 Back L to R

The photos were scanned and sent by Maeve Moloney, Anne’s daughter, and she tells me that she has been motivated to re read Peig’s story.

The book was for a long time required reading in secondary schools in Ireland. As a book with arguably sombre themes (its latter half cataloguing a string of family misfortunes), its presence on the Irish syllabus was criticised for some years. From 1960 the Irish population was urbanising, a process that led to the “Celtic Tiger” economy in the 1990s, and Peig’s tales of woe in rural surroundings confirmed to many students that Irish was a language of poverty and misery, while English was considered the language of science and commerce.