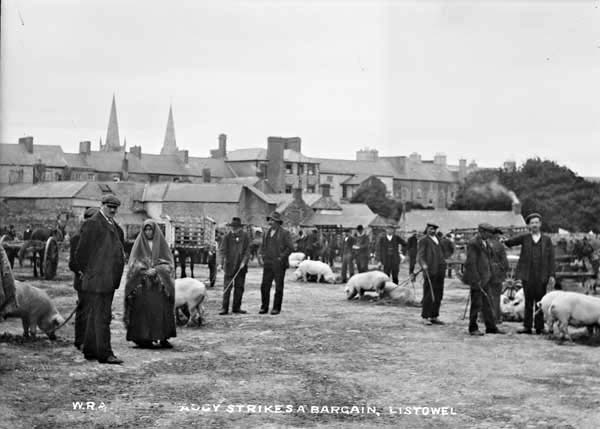 Pigs are becoming a bit of a theme this week.

The delightful caption on this post card reads, “Argy strikes a bargain.”

Obviously there was a thriving pig business in Listowel one time, such that warranted a market all to itself.

When I looked for information on the internet about the pig market in Listowel, this is what I  found. 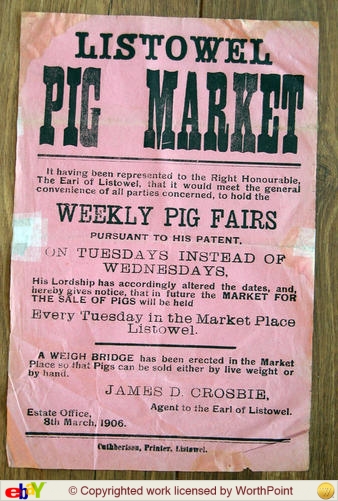 I found this following also

“Ballyhooly House (The Mansion) was built in 1871 by the dowager Countess of Listowel. At one time a Pig market was held every Monday and a Butter market every Tuesday in the village.”

Ballyhooley is a town Near Fermoy in Co. Cork. The population was 533 in 1837, 149 in 1893 and 186 in 1905 and there were 4 public houses. The village as it stands was built by the Earl of Listowel in the year 1830. Visit the village of Ballyhooly by crossing the bridge and turning left at the ‘T’ junction. On entering the village, at the left, is a picnic area and a uniquely designed Ballyhooly area map.

Ballyhooly Castle is situated in a picturesque setting overlooking the bridge on the Blackwater.

The tower house is in a good condition, having been renovated by the Countess of Listowel in 1864, but all that remains of the surrounding enclosure is a turret and section of wall.