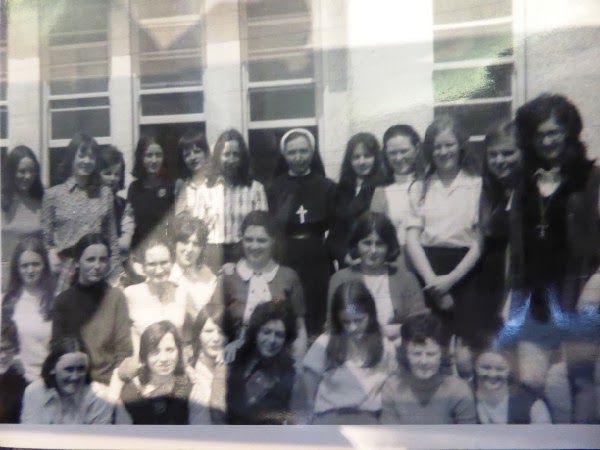 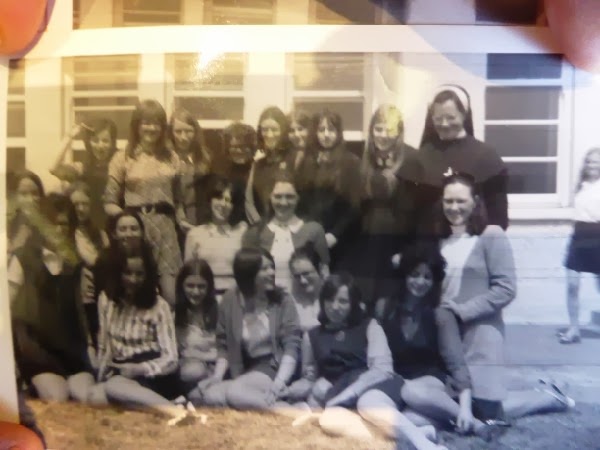 These two oldies are again from Bernie Carmody. She is the girl on the far right in the first photo. The nun in the first one is dear departed Sr. de Pazzi. The photo was taken on these girls last day in school. This must be stirring a few memories for some ladies!

Look who I met in the craftshop last week. None other than the star of our TG4 Tar Abhaile programme, Angie Mihalicz back for another visit to her homeland. 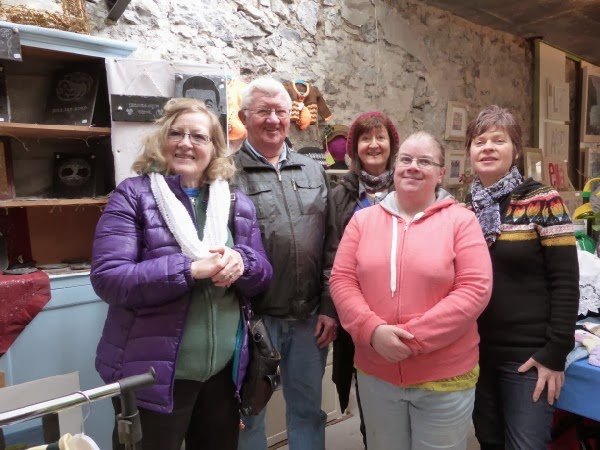 With Angie in the photo are her husband, Bernie Carmody, Maria Leahy and Patsy O’Connell. 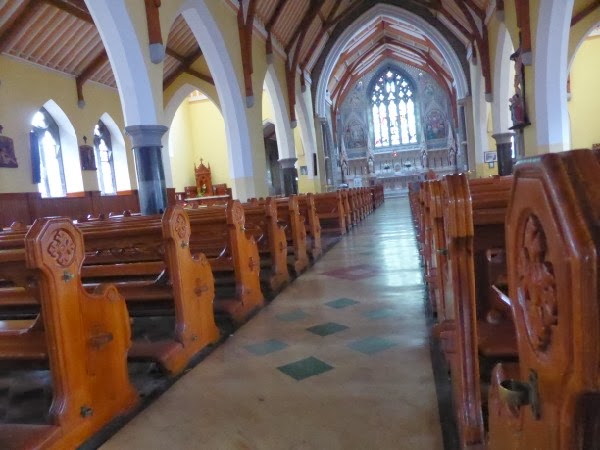 St. Mary’s is set to undergo some refurbishment soon. The roof is being repaired at present and the floor is soon to be redone. Changes over the years have led to wear and tear and some damage to the original tile work. 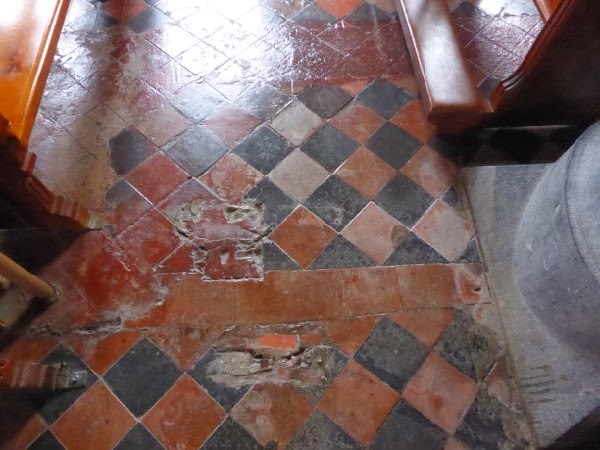 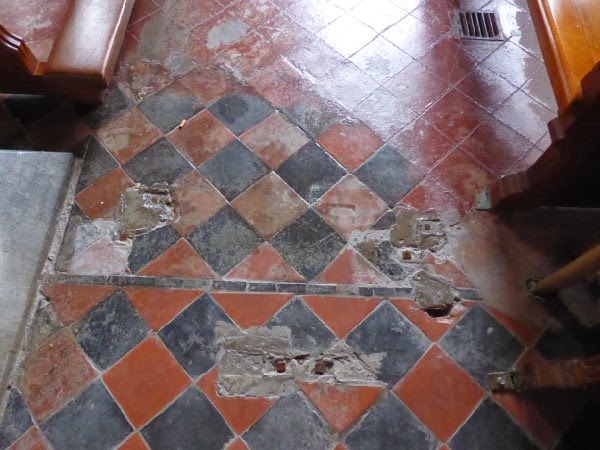 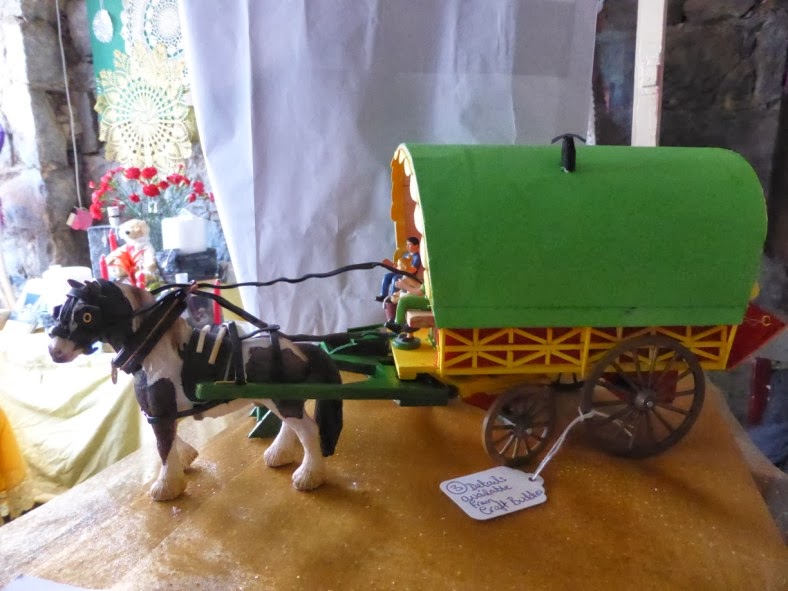 This lovely scale model of a horse drawn barrel top caravan is on display at Craftshop na Méar. Hours of painstaking workmanship have gone into. Even if you can’t afford to buy it, it is worth dropping in just to see the craftsmanship and attention to detail involved. 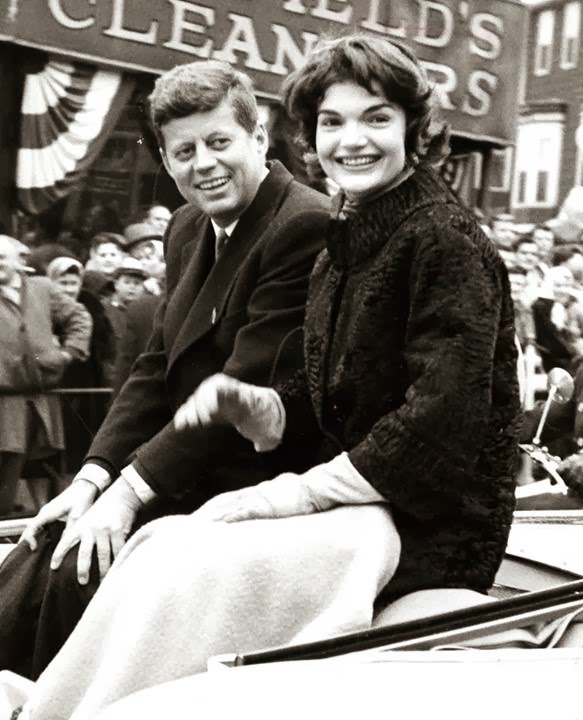 The late Tom Coffey, Playwright and teacher: the Listowel connection 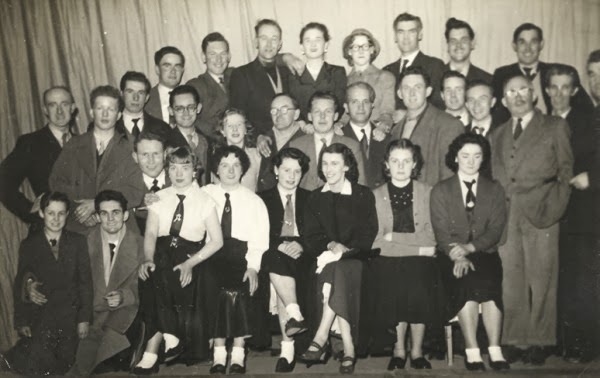 Tom, pictured at the back right between Mick Relihan and Pat Mc Elligott is remembered. I asked Marie Shaw if she remembered him and this is what she wrote:

“I can’t claim to know him personally Mary, I didn’t even remember his first name until you mentioned it, but I did take a commercial course with him at the Tech. What I remember vividly is his “Movie Star” good looks. There wasn’t a teenager in the town of Listowel at the time who wasn’t madly in love with him. Makes me smile just thinking of him. He was probably teaching at the Tech for two years. I left Ireland in 1958 and I would guess that he was in Listowel in 1956 and 1957.”

Jer. Kennelly came across this really interesting letter. It paints a very different picture to the ones we are used to from those bad days.

A MODEL LANDLORD AND AGENT.—To the Editor of the Cork Examiner.—

My dear Sir—The blight has made its appearance in some fields in this locality; but if it does not come on us heavier we will have (thanks to God) a more abundant crop than we had for the last twenty years.

In connection with this subject, I wish to state one or two facts. Sir John Walsh, an English baronet, owns a very large property in this part of Kerry, and his mode of acting is this:—A tenant getting possession of land is not demanded for rent for a year and a half, that is, until the third gale becomes due, then he is called on and every shilling that he laid out in improving the land, building a commodious and comfortable dwelling-house, and offices, &c., &c., is allowed him; and to such an extent has this encouragement induced the tenant to lay out that to my own knowledge in several instances, when the gale day came, the tenant had not only nothing to pay, but Sir John was his debtor.

In the general crash of the farmer class of this country, during the last four dreary years, of course some of Sir John’s tenantry felt the pressure, and looking upon this country as a doomed land, they made up their minds for America. What did Sir John do, he sent down his kind and considerate agent, Mr. Gabbett, of Dublin, to make his inquiries and the result is, that any man wishing to go is sent out, an outfit procured for him, his passage paid, and all at the sole expense of Sir John. Even this last spring he has sent out sixty adults at an expense of over 400/. One of these poor emigrants, David Dillane, on his departure, took leave of some relatives, whom he did not wish to leave behind him in this miserable land, but had not the means of carrying him out. This poor man turned to the agent and said lend me 51., and if I succeed in America, I will send it to you. He got it, and as soon as the poor fellow had money saved he sent it to Mr. Gabbett.

Mr. G. was in this country a few months since. He took up all the receipts the tenantry had for poor rates, county cess, &c., and allowed all in the rents.

I have not the honour of knowing Sir John Walsh or his agent; but these facts have come within my knowledge, and I thought it my duty to state them, as a bright exception to the general rapacity of landlords and the alleged dishonesty of tenants. I understand Sir John is about to visit this country in a few days, and never did monarch receive from subjects a more warm reception than this good man will receive from a grateful—contented, because a comfortable peasantry.—Your obedient servant, DAN. HUOLAHAN, R.C.C.—Listowel, August 14, 1849.

THE HARVEST PROSFECTS .—The Cork Examiner of Monday thus reports of that extensive county :—”Notwithstanding the prevalence of very unpropitious weather for the past week, we are still enabled to announce the general prosperity of the coming harvest.