That one small head could carry all he knew.” 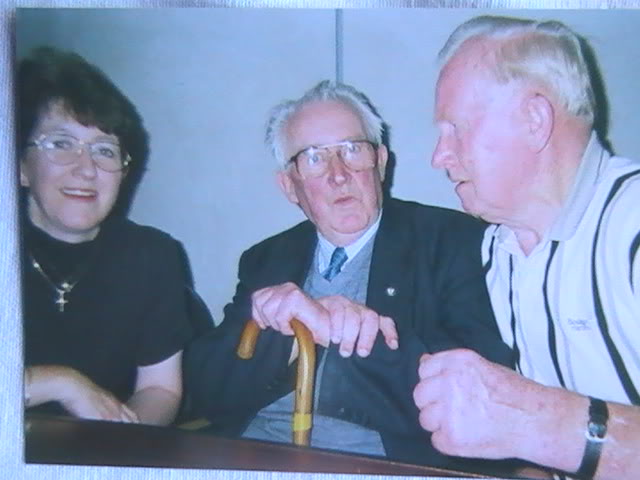 Anyone who spent time in Dan’s company came away enlightened. His contribution to Listowel and North Kerry cannot be underestimated. I am grateful that much of his legacy has been committed to print.

As my tribute, I will give you here a ballad that Dan wrote, in his own typical style, extolling a great Clounmacon footballing victory.

The morning sun climbed slowly up

“Be well prepared!” he said,

And Philly stirred the embers up

To toast the captains bread.

And donned his ruby shoes,

And fell in line with those who went

In fours, and threes and twos.

Maig Doyle, she watched the crowds go by-

What memories they brought her-

And shook the holy water.

Upon his frosted brow.

He blessed the flag he dearly loved

He bade them take his old brown hat

(And told what should be done)

And have it lofted towards the sky

And every sort of dame

Forgot to rub her lipstick on

In a rush to see the game.

And meadow patch and bohereen

Poured out their manhood’s fill

And Derry mustered up her troops

Led on by Donal Bill.

The ebb and flow of many a fight

In theirs and Ireland’s cause.

The clock has passed the noon day hour,

Then fast by Tarbert town-

Then lo!! To where the teams line out,

Across the scene sublime

There strode the form of a priest

He clasped the rival captain’s hands

And bade them fight the sod

In a manner well befitting

Their country and their God.

The National hymn and Anthem

Pour forth their solemn notes

And the banner green of Erin

The whistle’s blown, the ball is thrown,

The echoes from their hot blaze.

But, grimly set, our backs defiant

The fight flowed fierce and fast,

And the mighty Coleman clashed.

The tide of battle turns

Stands every Tarbert back.

He swerves and shoots with speed,

The leather sails above the bar-

And Elligott on captain Joe

And fiercly through the battles wade

They are fighting ball for ball.

Prized the doors of hope ajar

Sails high above the bar.

But faster and more fiercly still

Come Tarbert down the field,

Where Buckley, Lyons and Leahy

Once more refuse to yield.

As wild waves over golden sands

So Mulvihill the white flag lifts

A deadly drive by Costello

Sails past the mid-way line

Where Phelan and Wax Scanlon

Across the bar has sped,

Clounmacon on the half-time blast

Are still two points ahead.

Still grimly through the second half

Playing into wind and sun.

But Cregan, calm in Tarbert goals

As Halpin and Bill Egan

To fell his fortress tried.

With hawklike swoops our forward troops

Dash dauntless to the fray,

Then Tarbert break away,

The white flag to unroll,

To gain the levelling goal.

And echo ran and ran,

Twas deed for deed and speed for speed

And every man for man.

Twas pace and power for one hard hour

And fortune rocked and reeled,

Men trained and strained of strength were drained

To finish that fierce field.

The tide of battle bore.

Of falcon-fetch and eagle eye

Each long cheered clearance made.

The rock-like Scanlon on his left

Was ever to the fore,

While O’Mahony on his back

When, hark! Above the tow’ring trees

To crash a glorious goal.

Went soaring towards the sky.

Then Ned went for another point-

A black one- in at Macs.

As slowly sinking down to rest

The field is fought and won

To gallant Tarbert now we say

Long may each daring deed

Loom rock-like on the shores of fame

The stately form of the priest

And there presents the silver cup

The beacon-light of victory

The lit that glorious scene,

Shall long illume each fame-crowned name

We filled the trophy overflowing,

And drank in gladsome glee,

A toast to every heart we love

At home and o’er the sea.

We drained its bosom o’er and o’er,

Then home the captain took it,

His daughter Joan rushed out and cried:

Where did you get the bucket? 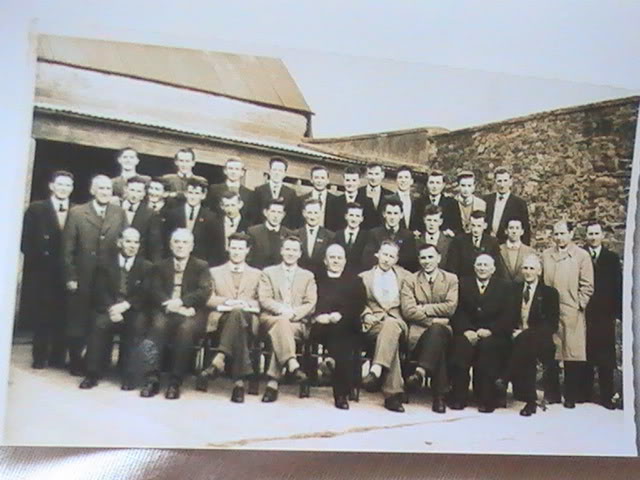 A better copy of the young farmers and mentors photo with Paddy Finucane included.

And as for yesterday’s boyeens, it looks more likely it’s 1948 than 68. It’s Mrs Crowley’s Senior Infants’ Class and it has a few famous scholars in it. Vincent has given me a few leads so I should have names in due course. Maybe a twin who checks in here but is currently in another time zone might help me out or maybe even a neighbour much closer to me might remember the names of his classmates all those years ago.