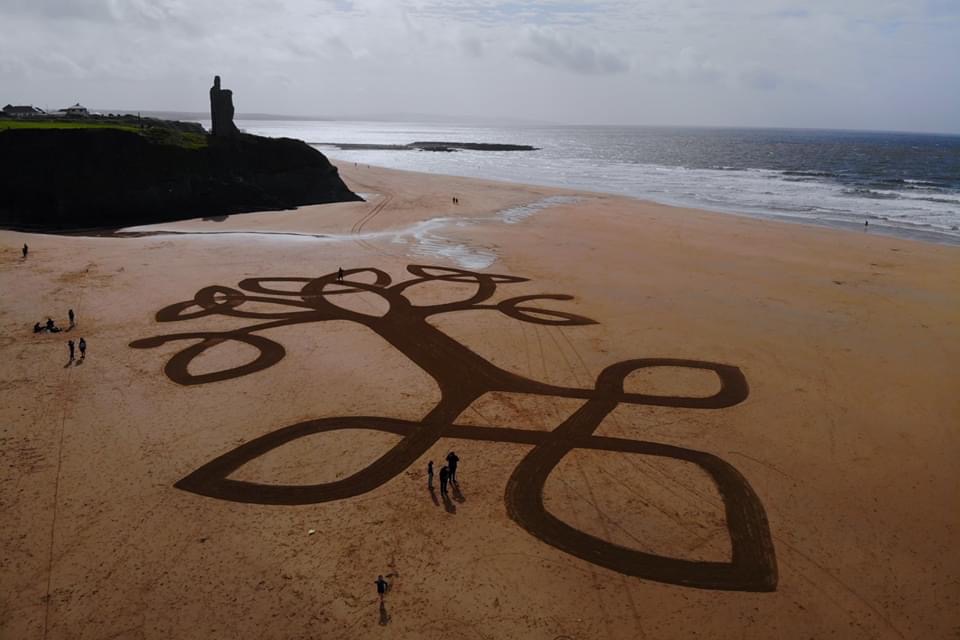 This lovely piece of commissioned sand art was executed by the very talented Pixie O’Gorman a few weeks ago.

“The Nicest Girl in Town” 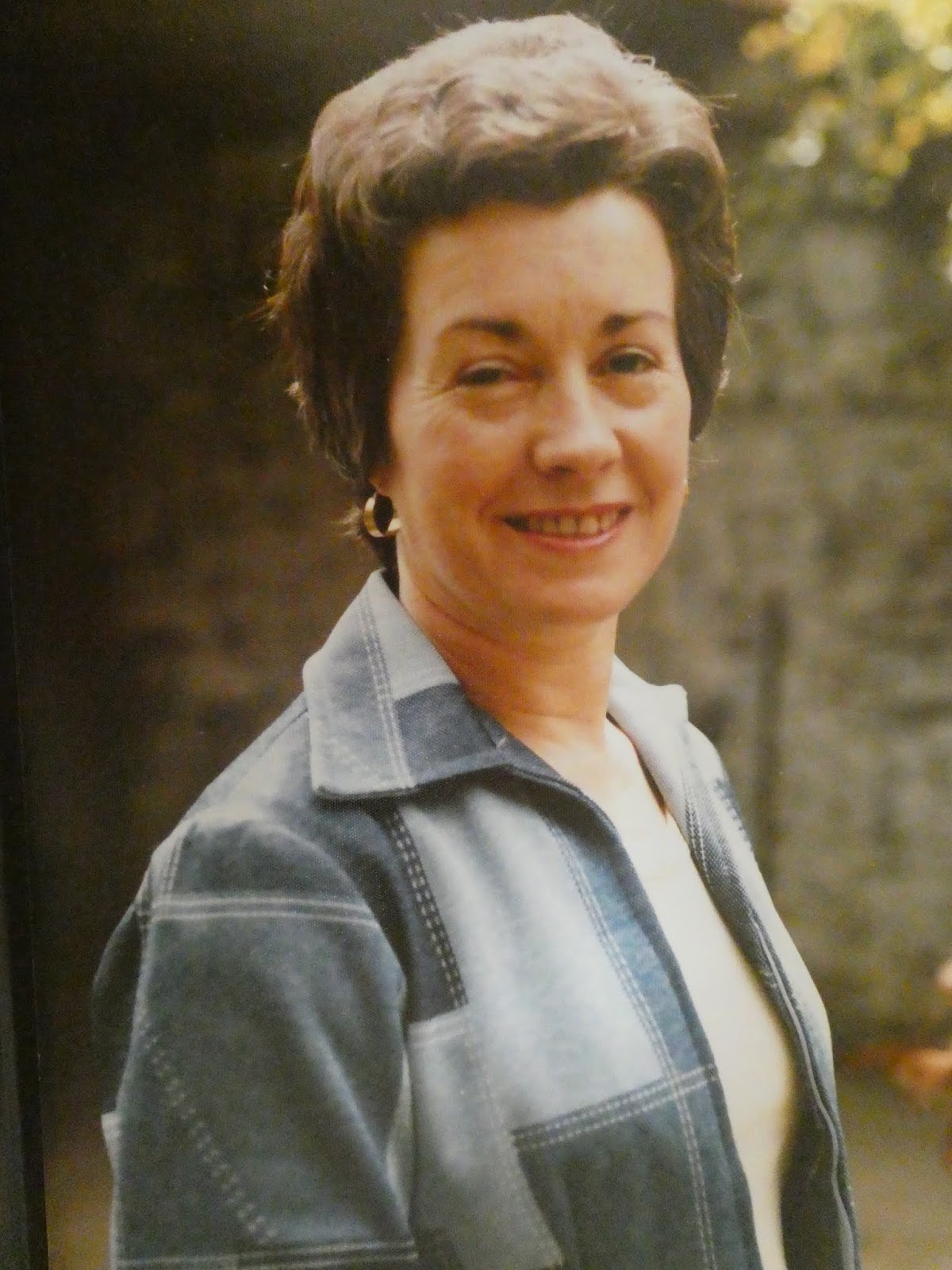 I know that many people who follow this blog would like to see here the lovely eulogy that John Lynch composed for his wife, Noreen.

The eulogy was read at Noreen’s funeral mass by John and Noreen’s daughter, Deirdre.

She began by thanking, on the family’s behalf, the many people who had made life easier for them in Noreen’s last weeks.

Then she recalled growing up in Church Street in a house and shop that was “like a railway station”. Noreen was the most hospitable of women and her customers, many of them boys, now men of a certain age, always recognised her and remembered her with fondness.

These following are John’s words;

I am the only one of 6 siblings who was not born at home but in a midwife’s premises by the barracks in Church St. just a stone’s throw from Noreen’s home at number 97. This happened because my uncle, Fr. Paddy Lynch, was home from Australia and my parents wanted him to baptize me after birth. 26 years later, he came home again and on that visit he married Noreen and myself in this church.

So, what does John Lynch have to say after 59 years of marriage to Noreen Horgan? Shortly after Noreen’s Dad died in ’61 we came home to live in 97, Church St. Peig Murphy lived with her husband Louie O’Murchú in Courthouse Rd. around the corner from the Horgans. Peig, who was from Kilgarvin like myself but who was 30 years wiser, said to me “John, you’re a very lucky man; you got the nicest girl in town”.

Look at Noreen’s photograph on the coffin – a photo of her from half her present age – and you may be able to gather part of what she had in mind.

Noreen was a woman who never got cross, who never gave out, and never argued. She always kept her composure and this calmness usually sorted out any situation. She was a people’s person, a great communicator, and she was deeply interested in people’s welfare – above all children. That is why some of those children, now maybe raising families of their own, who came into the shop in their schooldays, still like to talk about that experience 34 years on.

In later years, it was great to see her so happy with her friends around a table in the Arms Hotel, at Lynch’s in the small square, or in Lizzy’s after daily mass. I suppose these sessions could be labelled the 11 o’clock scene, far removed from any downbeat media news judging by the amount of laughter emanating. When she would return home a couple of hours later, I would be told about all the people that she met and that they had been asking for me. As the years passed, she mentioned that she knew the faces but could not remember their names…but sure I had the same problem myself!

It was a big shock to her to be diagnosed with cancer in her early 60’s. She accepted the diagnosis, her treatment and subsequent health issues as God’s will.

She also tried to accept the slow loss of her memory but hoped that it would not cause her to become aggressive at the later stages. I assured her that it could not happen to her with her calm temperament and, thankfully, it never did.

The next big health shock was her diagnosis of breast cancer in May this year. There was a post-surgery period in which she seemed to improve – the doctors and nurses were amazed at her tolerance at all stages of her treatment. On collecting her from Barringtons after her surgery, I heard a nurse say “Noreen – you’re a trooper” and she did not say that to just anyone. Noreen did not complain during any difficult treatment. When she was told that her illness was terminal, she (with her usual positive outlook) told the doctor that she had beaten cancer in ’97 and that she would beat it now. Later in the car outside, she said to Mary’s husband Dermot, “I’ve turned 86 now and, sure, I’ll have to go sometime”. When I saw her on her arrival home that day, I thought – “This is one battle that Noreen will not win”.

I want to express my gratitude to the GPs and staff of Ivy Clinic, to Oonagh Harnett and the staff of Broderick’s pharmacy, to Patsy Thornton who provided wonderful home help, and to the St Vincent de Paul. Grateful appreciation to the caring nurses of the Public health services. It was nice to hear them say “How is my favourite patient today” or “How is my little Linnet today”? A sincere thank you also to Dr Patricia Sheehan, the doctors, nurses, priests, and staff of the Palliative Care Inpatient Unit in Tralee, at a stage, where, without their devoted care and professional experience, the illness could have been harder to bear. Her carers always had a laugh with her and when I said how nice they were to her, she said, “They think I’m sick” and as the old saying goes “that whacked them all”. There’s more than one way to size up a situation.

Noreen was a deeply religious person. The fact that our religion was based on the 10 commandments of God, that was it for her. The success of her marriage and the wellbeing of her family and their offspring were her great goal in life. She was completely honest – could not dream of doing a wrong deed. Recently, I have had cause to remember what Bill Hennigan the vet said when Noreen’s father was buried – “There goes one honest man”.

She loved to laugh. She said, “laughter is the best medicine in life” and she had a lot of that medicine to dispense. If someone was codding her, they would lead her into always coming back with a witty retort and she loved that. Her humour could be mischievous. Recently a nurse rang to ask for Noreen’s permission to speak to me about her medical information. Noreen said to her that she would give her permission so long as the nurse was not some skinny, blond, 20-year-old!

As we grew older, we would discuss unusual topics such as our final days. Noreen was a lovely person to live with and I could get a bit cranky in my later years. So, I asked her did she ever feel sorry that she had married me that there were others who had admired her and might have given her a nicer lifestyle and she answered “NO”. When I asked her what she would say if she should depart before me, her reply was “thanks awfully for the nice time”.

I am very grateful for the great privilege afforded to me for living married life for 59 years with Noreen, such a unique person.

To my final days, I will remember Peig Ni Mhurchú’s congratulatory salute to me and I hope that our paths, my trooper and mine, will cross again in another life when I will join once again my “nicest girl in town”. 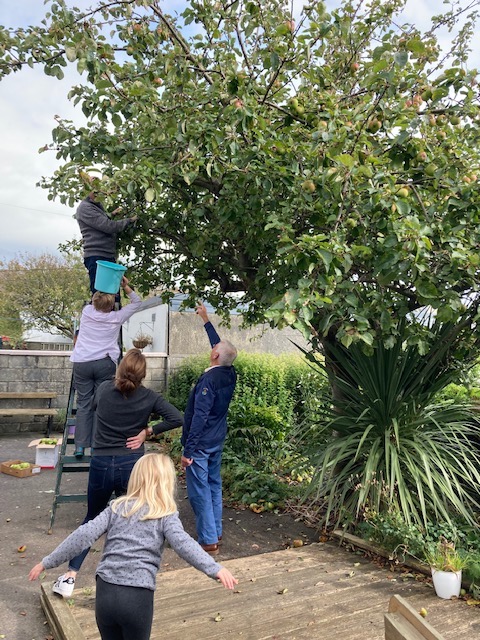 This year my tree produced a bumper crop. I got lots of help with the harvesting. 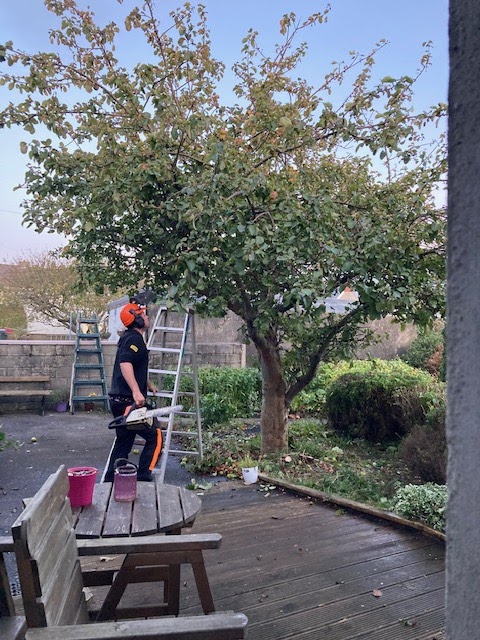 My tree had gone wild so I had it tamed and pruned. 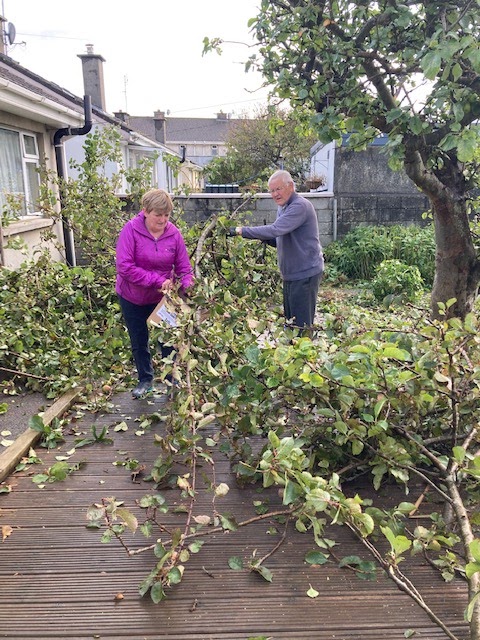 The Kerry face of Dairygold in Germany 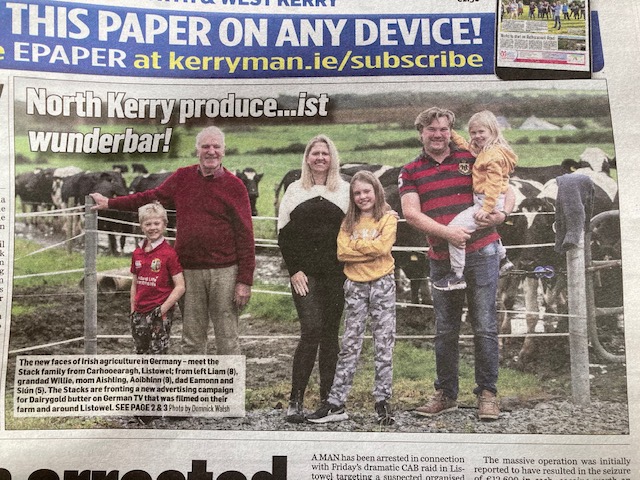 Front page of The Kerryman

The Stack family of Knockanure are soon to appear on German TV screens as the Irish farming family in the Derrygold ad campaign. The three generations of Stacks were selected as the photogenic face of Irish dairying today.

From Dublin to Corcha Dhuibhne and Charlie and Eileen Nolan