Séan McCarthy, more on the wren boys and some more Listowel people in November 2016 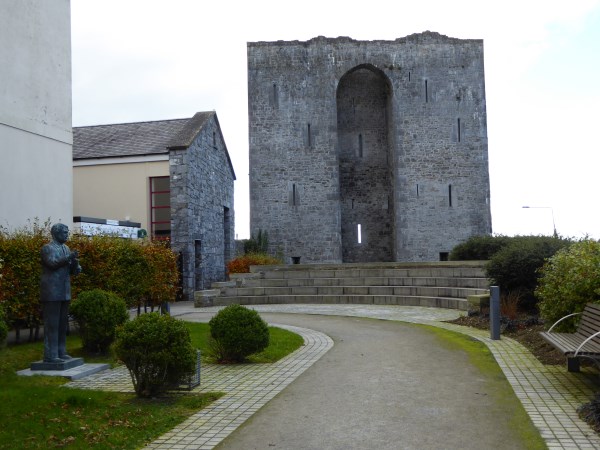 Seán McCarthy’s poems about Christmas were gathered into an anthology sometime in the 1970s. Junior Griffin has a copy. Below is another of the poems. In it Seán is writing about Christmas in his U.S. home in South Carolina. 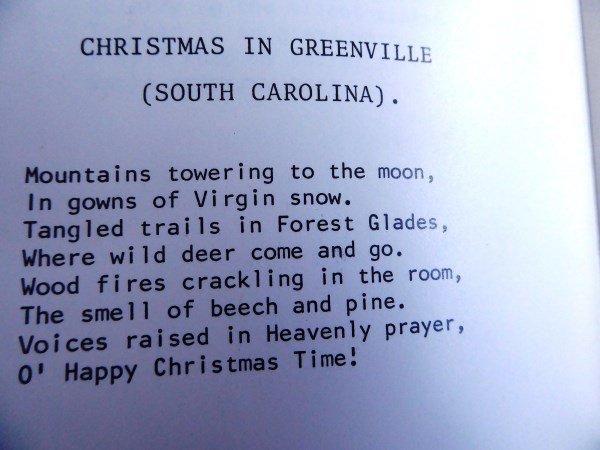 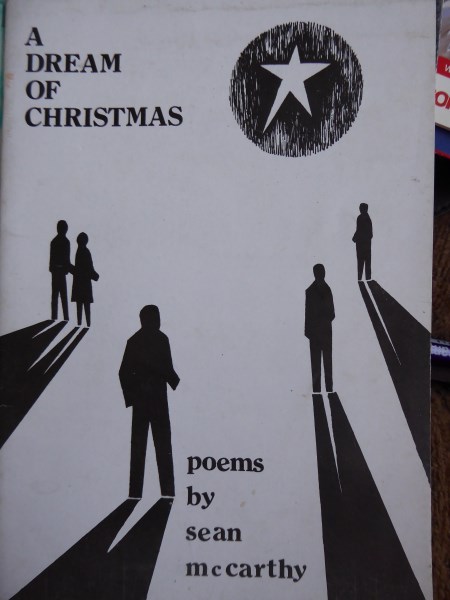 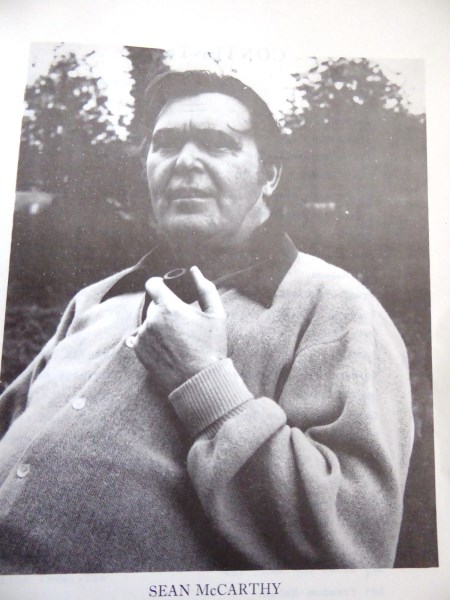 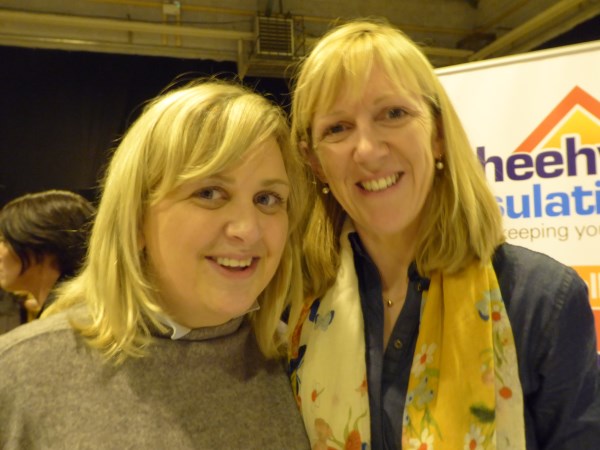 I snapped Alice and Catherine Moylan at the BOI expo back in late November 2016.

Wm. Molyneaux’s recollections of the Wrenboys of his youth

But then, about the
Wren.  How the wren derived her dignity
as the king of all birds.  That was the
question.  An eagle issued a challenge
between all birds, big and small as they were-wrens, robins, sparrows,
thrushes, blackbirds, jackdaws, magpies, or else.  They commenced their flight this
day-Christmas Day-The eagle, being the bravest continues her flight and was
soaring first.  All the other birds were
soaring after, until, in the finish, after a lapse of time in her flight, the
weaker birds seemed to get weary and could not continue their flightsome  ways further.
But the Wren pursued to the last.
The other birds got weak and worn out and in the heel of fair  play, the eagle said that she was the king of
all birds herself now.  The wren
concealed yourself under the Eagles feathers, in the end of  fair play the Eagle got worn out.  The wren flew out from under the Eagles
feathers and declared yourselves the king of all birds.  That is how the Wren derived her dignity as
being the king of all birds.  So we hunted
her for the honour of it.  Also, when St
Stephen was in prison and as he was liberated the band went out against St
Stephen, and it was a daylight performance and the wren, when she heard the
music and the band, came out and perched yourselves on the drum.  That’s how we heard the story.

Anyway we made our
tambourines.  You’d get a hoop made (in
them days) by a cooper.  There is no
cooper hardly going now.  You’d get this
made by cooper for about half a crown.  I
used to make my tambourines always  of goat’s
skin.  You could make them of an ass foal’s
skin-anything young, do you see.  How?  I’d skinned the goat, get fresh lime and put
the fresh lime on the fleshy side of the skin-not that hairy side but the
fleshy side of the skin-fold it up then and double it up and twist it again and
get a soft string and put it around it and take it with you then to a running
stream and put it down in the running stream where the fresh water will be
always running over it, and leave it so.
You could get a flag and attach it onto the bag, the way the water
wouldn’t carry it.  Leave it there for
about nine days and you come then and you can pull off the hair and if the hair
comes freely you can take up the skin and pull off the hair the same as you
would shave yourself.  And then you
should moisten with lukewarm water.  You
should draw it the way it wouldn’t shrink.
You should leave it for a couple of hours.  You would get your ring and you’d have the
jingles and all in-the bells-you’d have them all in before you put the skin to
the rim. You should have two or three drawing the skin to keep it firm-pull it
from half-width, that would be the soonest way t’would stiffen.  Let the skin be halfwidth and put it down on
the rim and  have a couple  pulling it
and another man tacking it with brass tacks.
That’s the way I used make my tambourines, anyway.  Ther’d be no sound out of it the first night.  I used always hang my tambourines
outside.  And then the following morning
t’would be hard as a pan  and a flaming
sound out of it.  And then after a bit
t’would cool down.  T’would be bad to
have them too hard, they’d crack.  Ah,
sure I made several tambourines that way. 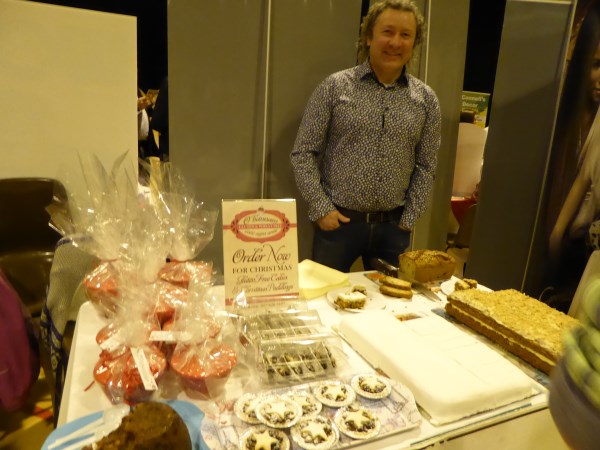 Maurice Hannon and his delicious cakes all available at the Market on Fridays. 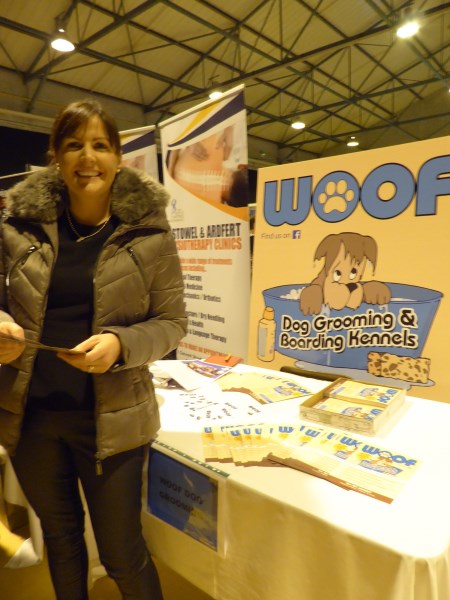 Why not let Claire pamper your pup for Christmas? 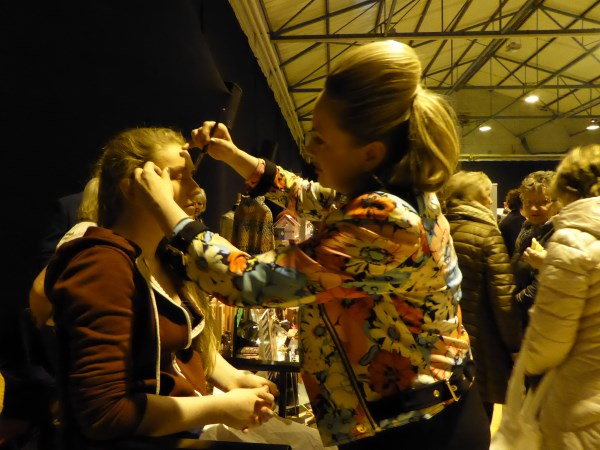 Sharon was giving a make over.  Just the thing for Christmas. 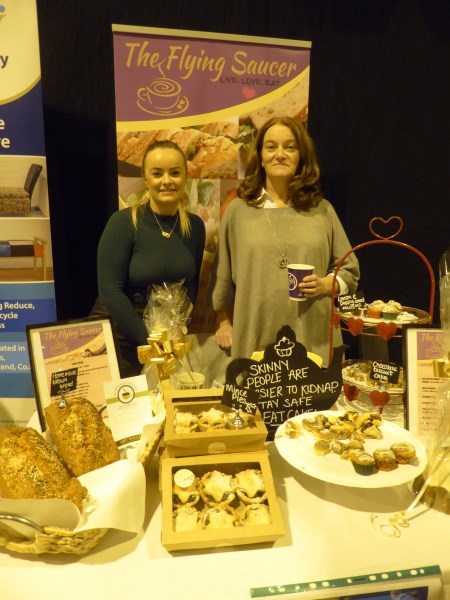 One of my favourite coffee shops, The Flying Saucer. 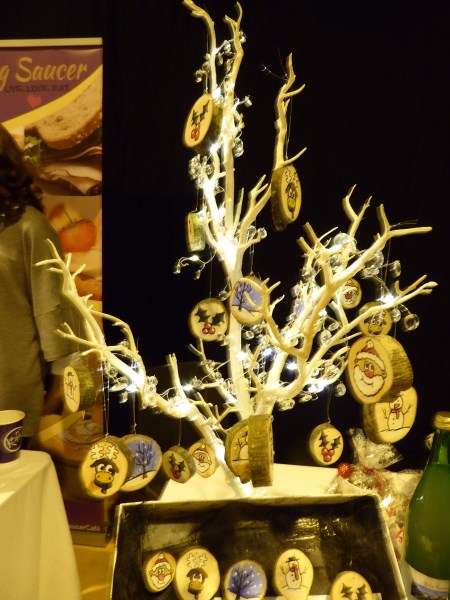 I bought some wooden tree decorations from an enterprising Tarbert girl. The tree fell in a storm, her father cut the branches into slices and she decorated them with Christmas images…lovely!