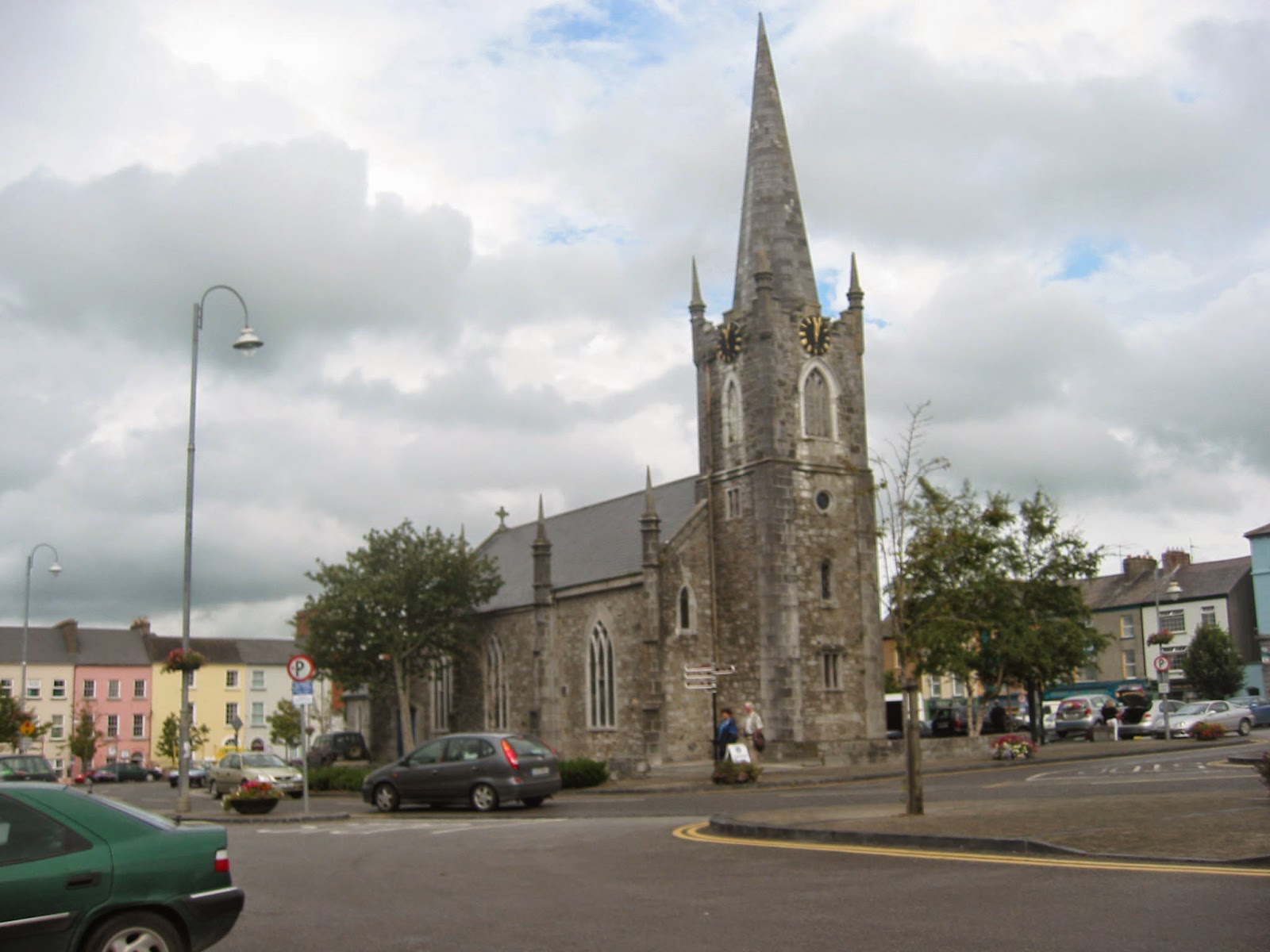 from a book published in 2001
by Radio Kerry.

Signposts to Kerry was a
little slot that Nora used to present on Radio Kerry. Here you have only the
text. Nora’s eloquent delivery was an integral part of the package.

“St. John’s is a dynamic
Theatre and Arts Centre which presides over the old Norman Square of the busy
market town of Listowel and its largely agricultural hinterland.

Built in 1819 to a design by
Cork architect, James Payne, the gothic style stone building served the local
Church of Ireland congregation for many generations. Bryan MacMahon would tell
the story of how, on Sunday mornings, before Independence, a platoon of British
soldiers billeted on the banks of the River Feale would march up the hill to
attend service in St. John’s with a few breaking away to go to mass in St.
Mary’s.

While growing up in Duagh,
famous playwright, George Fitzmaurice attended service in St. John’s conducted
by his father.  And more recently, during
its restoration period, Ted Hughes, who was later to become Poet Laureate to
Queen Elizabeth of England read his poetry there.

Now St. John’s is the Mecca
for a wide variety of cultural activities in an area already renowned for its
writers. New life was breathed into the old grey stone when it was officially
opened in 1990, having been restored and refurbished by a voluntary committee.
Stained glass windows are complemented by the restful blue furnishings in the
auditorium where adaptable seating and lighting provide a flexible space to
suit a variety of artistic activities. Local, national and visiting companies
from abroad provide theatre in its many forms. Such is their appreciation of
the venue that return visits have become almost the norm.

Ever since Listowel recorded
and forwarded its condolences to Warrington in Britain after the IRA’s tragic
bombing of that city, a Warrington company makes frequent return visits.

St. John’s Youth Theatre has
developed along the way and approximately one hundred children benefit from
regular teaching in different art forms. The annual summer school is a
highlight.

The visual arts find a warm welcome,
while music in all its variety can be heard – in fact St. John’s is fast
developing a high profile for World Music.

A tourist information outlet
is accommodated in the foyer during the summer months.” 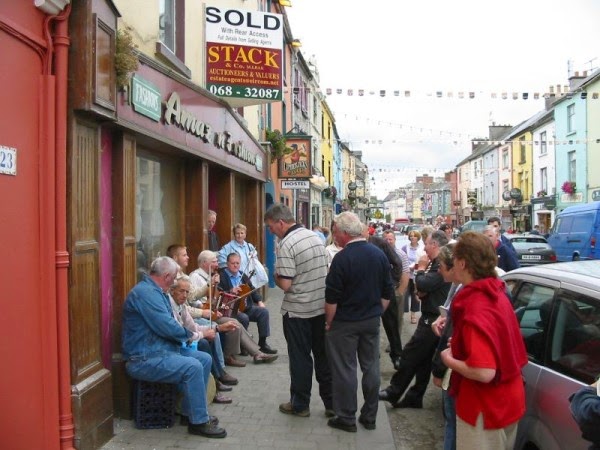 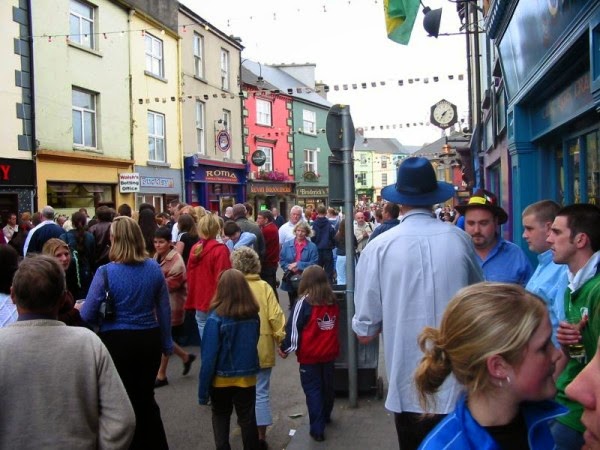 ALL THE FUN OF THE FLEADH as All-Ireland Fleadh comes of age;

THE TROUBLE-FREE coming of age All-Ireland Fleadh Ceoil ended in Listowel last night with and attack on  the “little cliques of Irish intelligentsia” for always casting aspersions on things native.

Comhaltas Ceoltoiri Eireann National Director Labhras O Murchu told crowds packing the north Kerry town for the final sunlit day of the Fleadh which was celebrating 21 years of Comhaltas activity: “The Fleadh is an opportunity for being ourselves “

But he declared: “There are people in Ireland, little cliques who all the time are casting aspersions on things Irish. There always are people—the influential and so called intelligentsia among them—who are forever casting their eyes and thoughts away from the shores of Ireland.

“These are the people who would forget that we had a great culture and tradition of our own which should always be promoted.”

Comhaltas president Seamus de Brun said this was a time when the national revival was being more openly and insidiously attacked than ever before. The latest attack on the revival of Irish was the “stupidly outrageous allegation that our children were being retarded by  Above: The Bishop of Kerry, Most Rev. Dr. Casey was an interested spectator as a piper led the parade during the Fleadh Ceoil in  Listowel.

As an organisation Comhaltas did not participate in the debate on the proposal to enter the Common Market. The organisation, however, did take a more practical step to ensure that due prominence would be given to the  importance of safeguarding the national identity in the context of that debate.

Undertakings had been given by the Department that views would be further considered, but regrettably nothing further had been heard  from the Government Department concerned. A great opportunity had been lost to lead a nation-wide crusade to stimulate a renewed interest in the national revival.

Mr. de Brun declared that entry to the Common Market would not necessarily mean that our national identity would be submerged. Its advent, indeed, might well be the stimulant required to allow our people to become truly conscious of this challenge.

Urban Council chairman Mr. John Pierse said the old-time image of the Fleadhanna should be gone forever and he asked other  towns in Ireland to stand up and be counted—because it was the duty of every Irish person to carry the torch into the next generation. 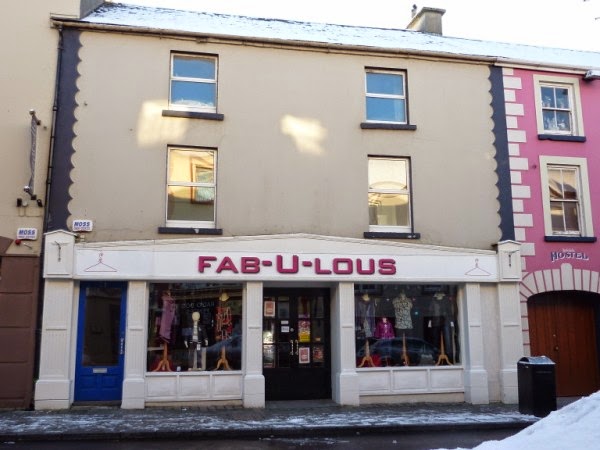 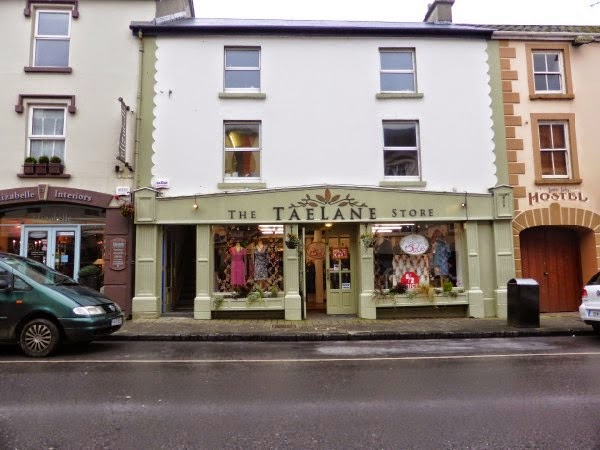 Today it is the very stylish TaeLane Store.