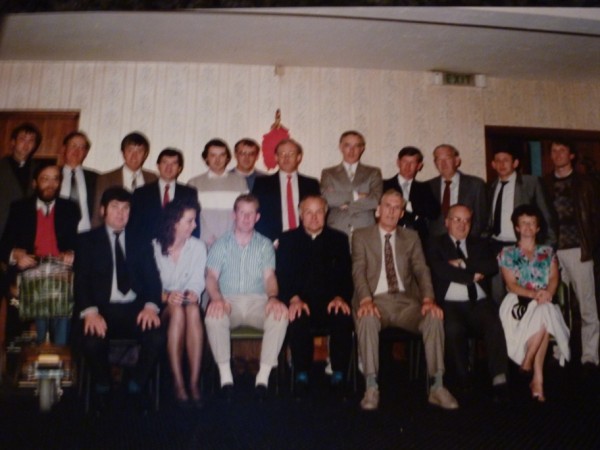 This is a poor quality photograph of the staff of St. Michael’s College on the occasion of Fr. Seamus Linnane’s retirement, May 18 1989.

Only two are still on the staff of the college.

In the states they are celebrating the release of the 1940 census records. We soon may too have something to celebrate:

Legislation to allow the digitisation and release of Ireland’s 1926 census will be passed within three to four months, according to Heritage Minister Jimmy Deenihan TD.

In a response to a question raised this week in the Daíl, he said: ‘The legislation [to digitise the 1926 census] has been approved by the Cabinet. Following its enactment, I will have to come up with the resources to implement it. I cannot start the process until the enabling legislation has been passed. It is hoped it will be ready in June or July.’

The release of 1926 Irish census has been the subject of a long campaign by the Council of Irish Genealogical Organisations (CIGO).

Steven Smyrl, CIGO’s executive liaison officer, was delighted to learn of the Minister’s statement. ‘This is terrific news and more than justifies the long campaign which CIGO had led to convince those responsible that the 1926 Irish census returns are an invaluable source for the history and genealogy of the Irish people.

‘The returns, compiled 86 years ago, amount to a ‘family snapshot’ taken just after a succession of tumultuous events in the history of this island. First the Great War, then the 1916 Rising, quickly followed by the War of Independence, partition and the creation of the State and then the fateful civil war!‘

Exactly where family historians will be able to access the 1926 census returns remains to be seen although it is thought unlikely that free online access won’t be part of the package. As to the timescale, the Minister has previously expressed a desire to see the release completed by 2016, in time for the anniversary of the 1916 Easter Rising.

Whether or not any redaction of information (to obscure personal data of people who were children when enumerated) will be insisted upon, is another detail yet to be confirmed.

What is important right now is that plans to release these records have shifted from the ‘wish list’ to enactment.

So what information will the 1926 census returns reveal when released to eager Irish genealogy researchers?

In addition to the usual name and surname, relationship to head of household, marital status, language, religion and profession, this census collected the following:

Obviously, questions like these help provide us with fabulous detail about our ancestors and may well help many Irish genealogists break down brickwalls or solve family mysteries.