A big thank you to Vincent Carmody for all that follows in this post. I am posting it in response to a request for information on the bands room. 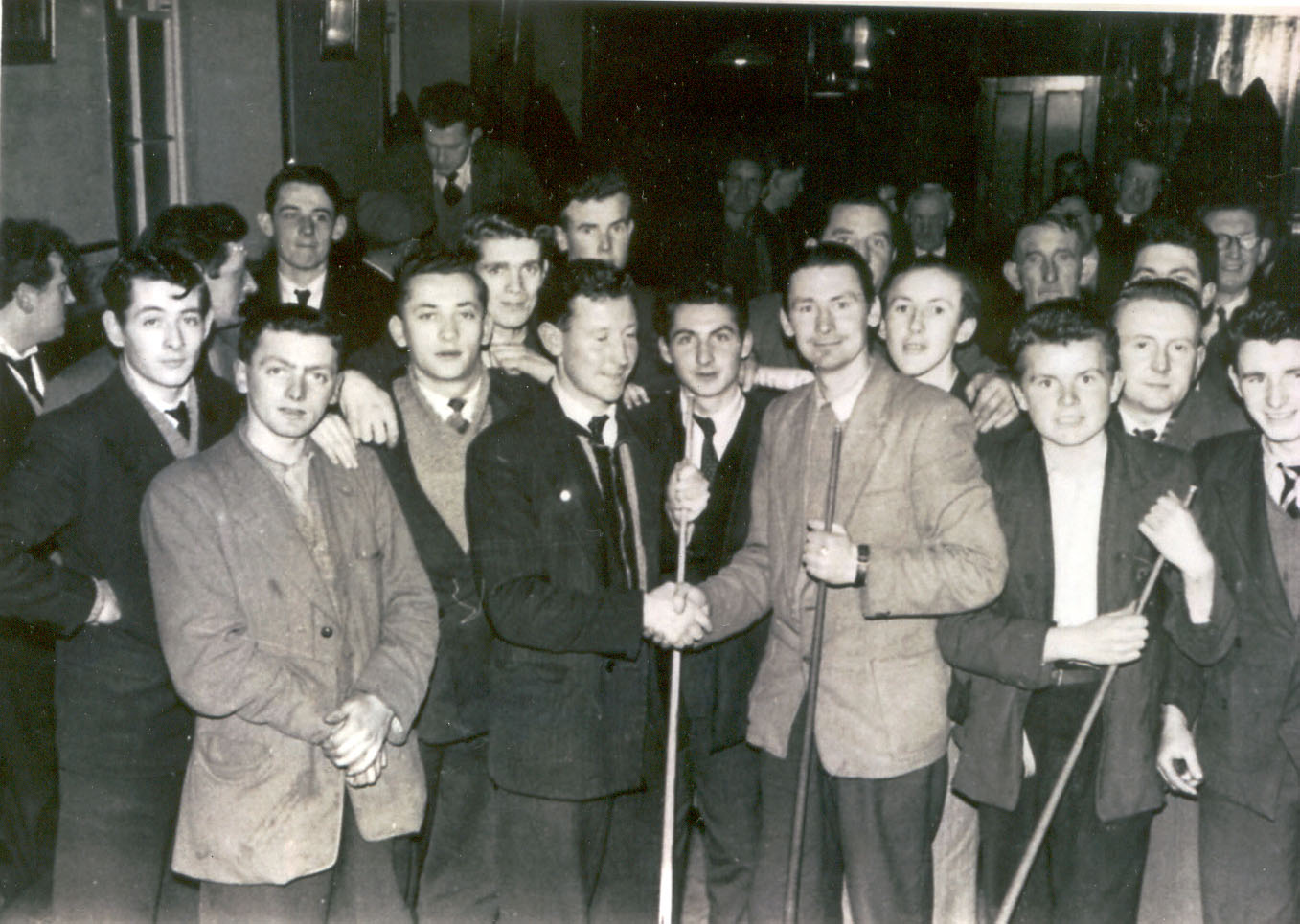 Final of the billiard tournament in St. Patrick’s Hall, Listowel in 1954/55

There was an active Temperance Society in Listowel at the end of the nineteenth century, this committee were anxious to have a meeting place and after some protracted negotiations with Lord Listowel’s agent  they were facilitated with a site where the present hall now stands.The committee comprised of the following, Lar. Buckley, Maurice Kerins, Con , Maurice Scanlon, Michael O Sullivan and John Kirby.

Fund raising began at once and the agreed contract price of £293 was quickly risen. Soon afterwards building commenced and was completed within an agreed twenty two weeks. The builder was Mr Michael Costello of Church Street.

An interesting aside is that the builder was bound by a contract clause that he was libel to pay a penalty of £1 for each week of part of for any over run. The committee appointed Mr Maurice Nugent, then coach-builder to the Lartigue to act on their behalf. Fealy Brothers supplied all building material.

When built, the hall became the focus for much Parish activity. A very fine Brass & Reed band which had been active in the town for some years were facilitated with the use of the upstairs room as a bands room, the balcony from this room overlooking Upper William Street was used as a stage for many outdoor summer evening performances. The main room downstairs was used for card games, billiard and snooker, the towns musical society of the day also used the hall and the billiard tables were used as an improvised stage.

In 1895 a split occurred in the local GAA club and for a number of years afterwards the Temperance Society affiliated a team in the Kerry Co. Championship known as St. Patrick’s.

In March 1907 a set of nineteen general rules were drawn up and unanimously adopted. These rules gave a clear indication of the moral code which the members were expected to adhere to.

In 1936, a branch of the Catholic Young Mens Society was started, this incorporated a study circle and lectures were given on various nights. One of these had Paddy Fitzgibbon (senior) speaking on the topic “Is Ireland ripe for Communism?”

Also, the same year saw a move into the electronic age with the procurement of a radio. This was very popular, especially on Summer Sundays with live transmission of GAA matches.

Over the years, whist drives were organised as fundraisers, a bridge club was also set up under the chairmanship of local photographer, Jimmy Adams.

From the 1920’s all band activity was under the baton of James Hennessy.  He had served in the British Army as a bandsman in his younger days and besides being a noted musician he also was a strict disciplinarian.  However allied to his retirement in the 1940s and a lack of genuine interest shown by the younger members it was decided to cease band activity, and so the band which had given so much joy the followers near and far for over fifty years was no more.

Father Sayers arrived as a new curate in Listowel the early 1940s, and was appointed as Spiritual Director to the Society.  At the first committee meeting which he attended it became apparent that he was determined to leave his imprint with a set of new rules and regulations which he proposed. These caused immediate resentment. Some of these were,

In future the Hall would be referred to as St. Patrick’s Catholic Hall,

He in future would nominate all committees, (this was a break in tradition, as from 1905, members elected half of the committee of sixteen)

Membership of the men’s confraternity had to be strictly adhered to by all members.

Fr. Sayers, who was vehemently anti-drink, decreed that anyone he suspected of entering the hall having taken drink would be suspended. Many members resigned at this point and the position was further escalated by the announcement that the front door lock was to be changed and entry would be permitted to key holders only. During this period also the now unused band instruments which had been stored in the upstairs bands room were sold without any consultation with the older members who had been part of and had always hoped for a reformation of the band.

The resignation of so many of former active committee members must have had an immediate effect on Fr. Sayers.  He relented on much of what he had tried to implement. Sanity prevailed and things resumed in a more lax mode with Fr Sayers taking a more demure back seat role.

Following the war years, under a new and younger management, the hall went from strength to strength.  Billiard tournaments were organised with clubs from other towns, card games of Poker, Solo, Patience and Whist were popular, while Jimmy Adams and Super Mulcahy again revived the dormant Bridge club. An annual dinner dance was organised (a ladies committee was chosen to run this, even though membership of the Society was for men only). The hall remained in great use and activities were most popular especially during the months from August to May, however by the late 1950s the condition of the hall in general, now built over sixty years had started to decline and a revamp was badly needed.

Again it was in the form of a new Curate as Spiritual Director that was to effect changes, Fr. Michael Keane arrival in Listowel was to herald a new beginning for the hall.  A tireless worker, he gathered around him a band of fellow workers and so began a whole array of improvements, the first since 1893.

During the late 1950s and 1960s the hall was once again the centre of winter activities and one of the most popular fundraisers was the holding of Pongo during Listowel Races. However by the latter part of the decade a steady decline of membership had begun. This would have been mainly due to emigration and a host of other social activities which had become popular by this time.

The hall had closed by 1970 and the billiard and snooker tables were dismantled. One particular group showed interest in taking it and running it as a private members club, the local council were said to be interested in buying it, with a view to knocking it in order to give wider access to a council car park at the rear of Charles St./Upper William St.

During the 1970/80s it mainly served as a hub and office space during Writers Week, Fleadh Cheoil, Listowel Races and as headquarters of a youth club. By the 1990s a very vibrant active retirement group under the Chairmanship of Michael O Sullivan and they with the youth club  began a series of fund raising draws to find money to implement some repairs. Again a young Curate got involved, Fr John Kerins.  Meetings took place and with the funds already collected along with grants promised by Tuatha Ciarraí and North Kerry Together, the committee set up to oversee the changes sought and got FAS to carry out the restoration work. Work started and was completed in 2002. The major improvements have left us with a building that looks better than ever, since the re-opening has once again been the centre of a multiplicity of events and groups. Hopefully it will again serve the town and its people for the duration of the twenty first century as it has done for the previous hundred years.

Countdown to The Races