A picture, A Botany lesson and some philosophy from Raymond O’Sullivan on Facebook 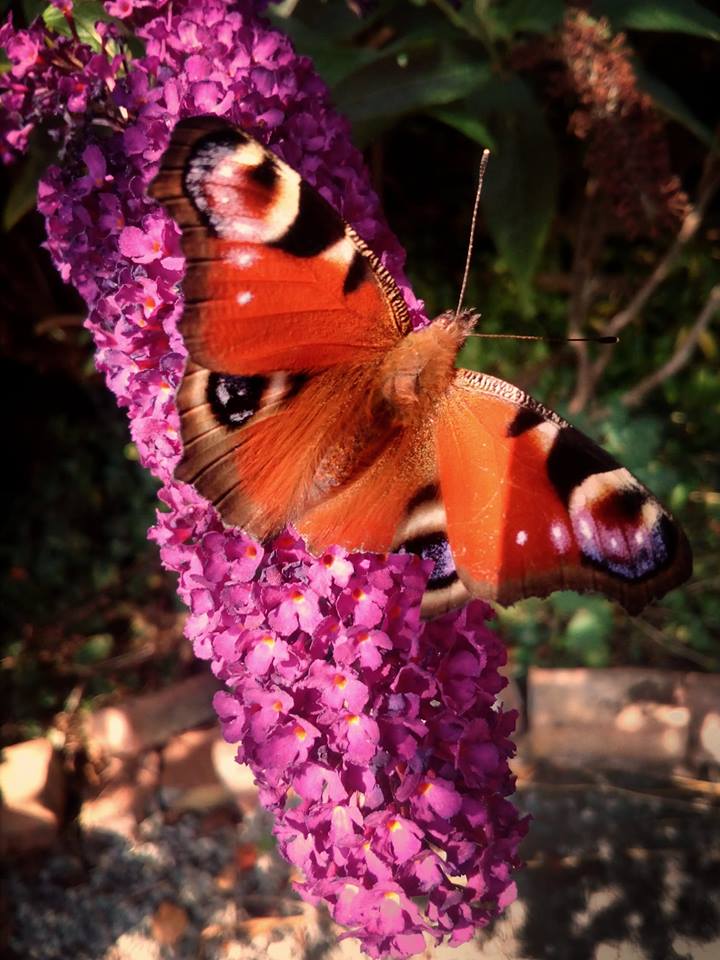 Buddleia, the butterfly bush (Irish: tor an fhéileacáin), divides gardeners into two warring factions: to the ecologically minded it is a noxious, invasive weed, and to the other it is a colourful perennial shrub, which, just as it says on the tin, attracts butterflies. Personally speaking, although the buddleia in my garden is c. 20 years old, it has yet to reproduce itself and every August it isfestooned with flowers and butterflies.

In many cultures around the world butterflies are associated with the souls of the dead. The transformation of the caterpillar into a butterfly provides a perfect model to explain the concept of the soul leaving the body, of life after death. Some people believe that if a butterfly lands on your shoulder it is the soul of a deceased loved one making physical contact with you again. A nice thought, but, be that as it may, no garden truly blooms until butterflies have danced upon it and I would not be without my butterfly bush.

“May the wings of the butterfly kiss the sun, and find your shoulder to alight on
To bring you luck, happiness and riches today, tomorrow and beyond.”- Irish Blessing.

There’s Something about Hurling 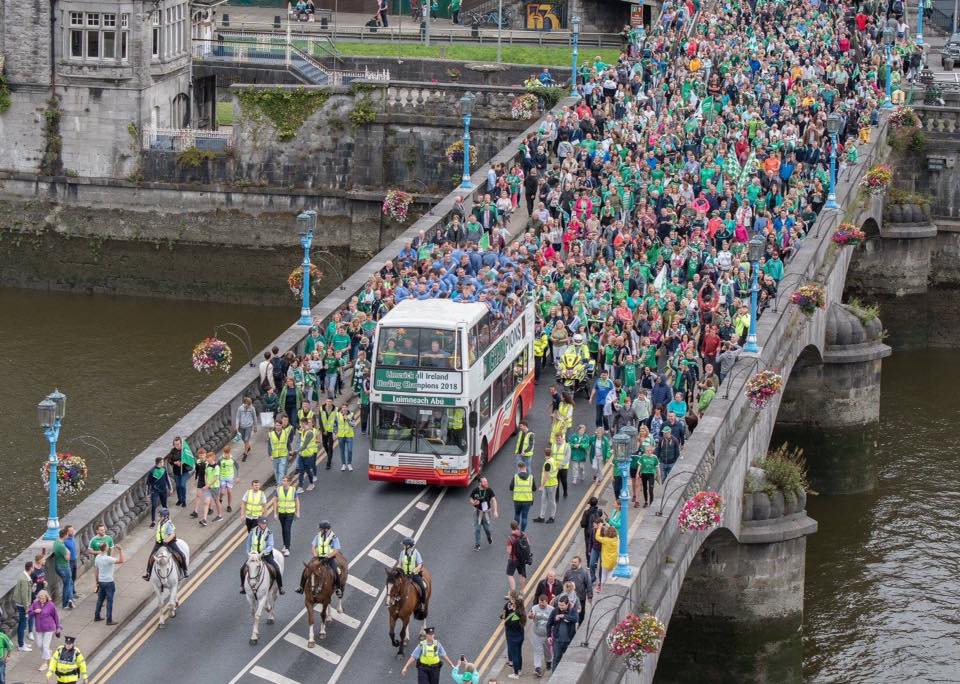 The country has gone mad for hurling this week but in some places it was ever thus. 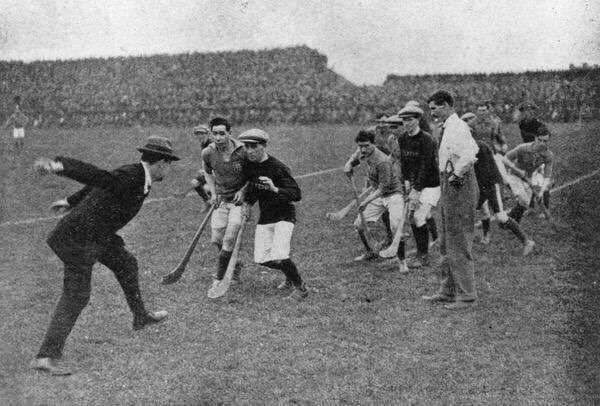 A photo from The National Archive of Michael Collins throwing in the slioter at the start of the 1921 All Ireland Hurling Final. 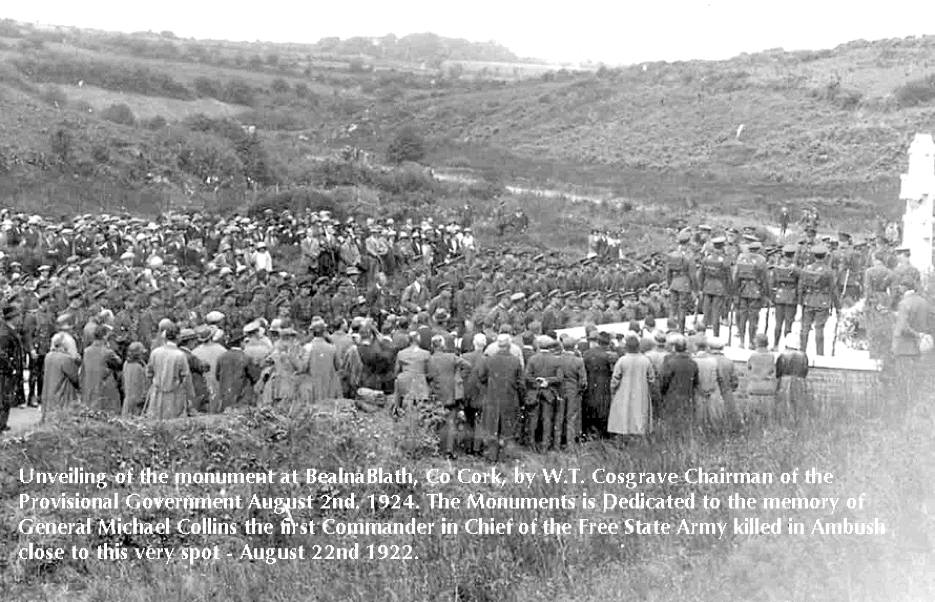 Recently I received some “warning letters” which upset me. They weren’t anonymous, but nevertheless, upsetting. I took consolation from this article by John B. Keane in The Limerick Leader Archive.

ANONYMOUS letters again this week. This week there is a long one, a poison pen epistle from London. I gave it away after the first two pages. It must have been twenty pages long. It was a deliberate attempt to misinterpret a statement I made recently on television.

With regard to poison pen letters, I have this to say. Those who write them are in dire need of medical treatment and the letters, instead of being frowned upon, should be given to one’s local doctor.

He will find men in his own field who may be helped in their study of mental problems by such letters.

This latest letter sent to me is only one of hundreds I have received down the years. Whenever I receive good publicity at home or abroad in newspapers, magazines or television, these letters never fail to arrive. At first I would be worried but as time went by I realised that the unfortunate people who write the letters are not really to blame.

Envy, jealousy, annoyance, resentment and hatred are in the makeup of every human being and when these fester or turn sour the result is often the nasty anonymous letter.

The first one I ever received was after I wrote Sive. The letter was posted in Listowel and it had a clipping from the Catholic Standard enclosed.

It was a very vicious letter and the clipping was attached in a futile endeavour to support the claims of the writer. My wife and I were very upset at the time and spent a few sleepless nights over it.

I was so upset that I decided to find out who sent it. A tall order one might think. Not really.

The fact that the letter was posted in Listowel did not necessarily mean that the writer was a native of Listowel. However, I had a hunch that the person was from Listowel.

At the time, quite a number of people in the town received the Standard every week. I was one of them. I found out who many of the others were and I proceeded to investigate.

It was simplicity itself. A woman friend, on my instruction, would borrow a Standard in an effort to trace the writer.

Eventually, a Standard turned up with a piece missing. The piece I received fitted perfectly into the vacant space.

I, therefore, found out without difficulty who the writer of the letter was. I got the shock of my life, so much so that I never want to know the identity of any poison-pen author again.

The woman was a stout churchgoer and avowed goodie.

All I did was to hand her back her clipping and letter. She accepted without a word and I recalled a number of good turns I had done her down the years.

The moral here is this. If you receive an anonymous letter tomorrow or the day after or any other day do not be upset. Rather be concerned for the sender.