Yarnbombing in Kildare, Bird Lore from 1937 and a Listowel Fashion Designer 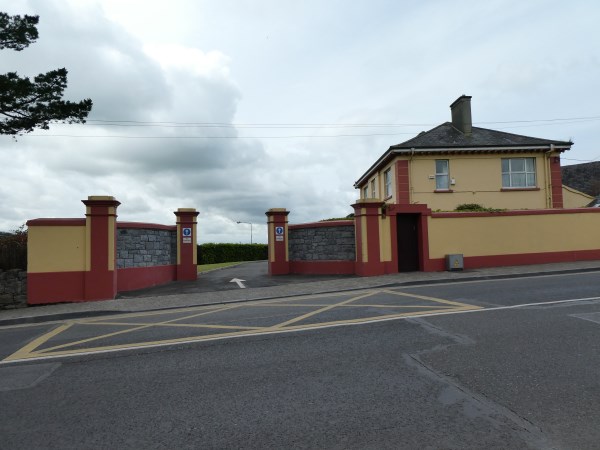 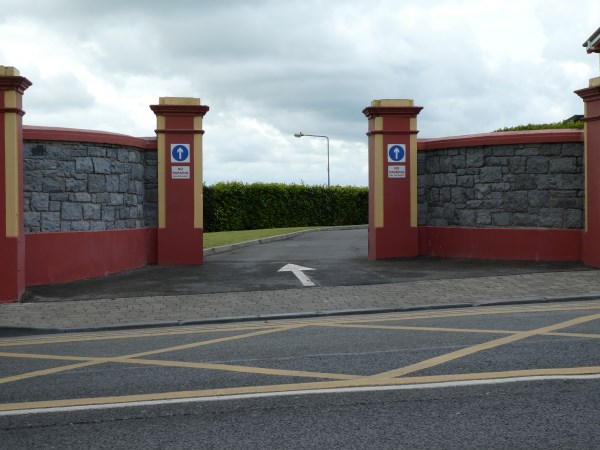 Recent repair work at the presbytery entrance revealed a lovely stone wall under the plaster. 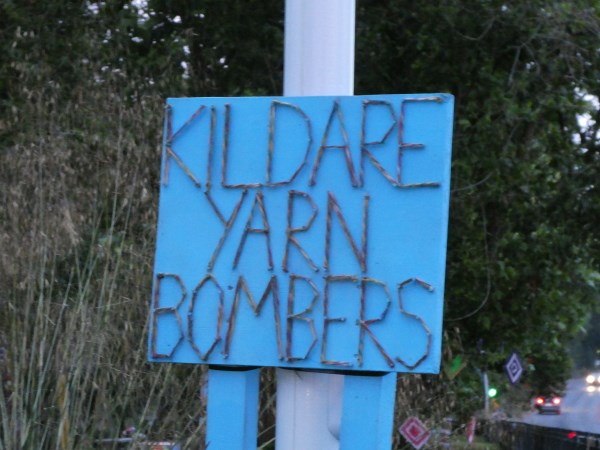 People who know me know that I love a spot of knitting and crochet. I was thrilled to get to see this huge yarn bombing project in Newbridge as part of Kildare’s June Fest. 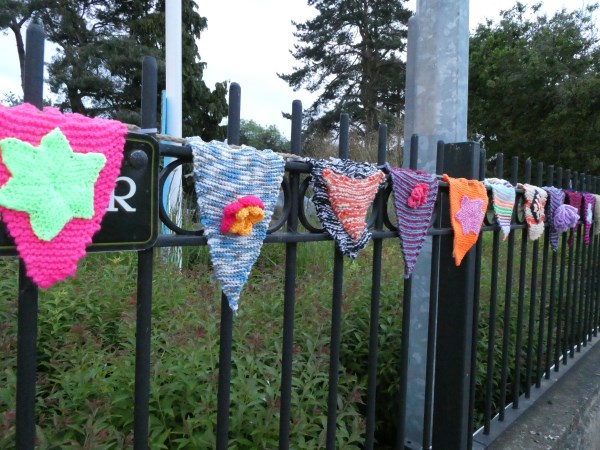 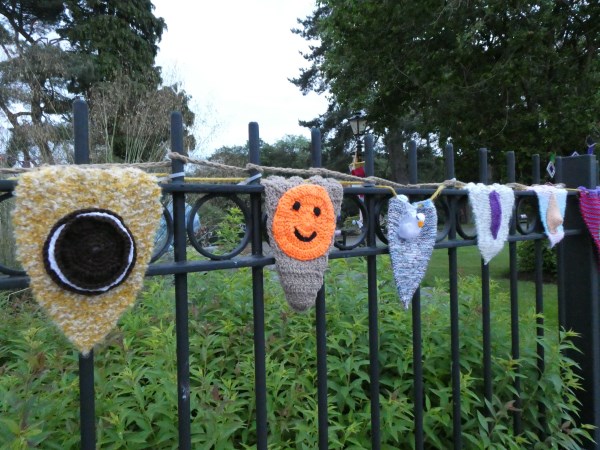 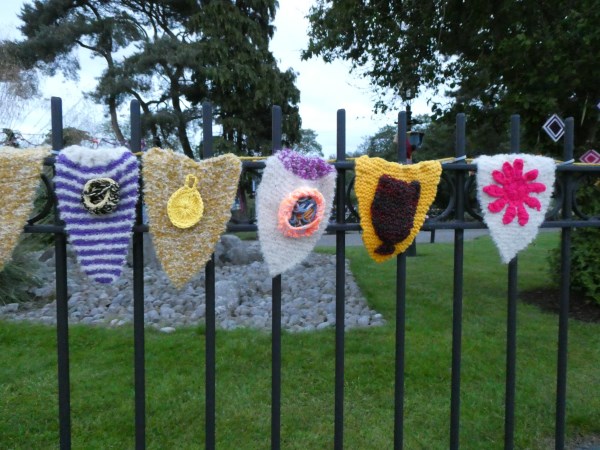 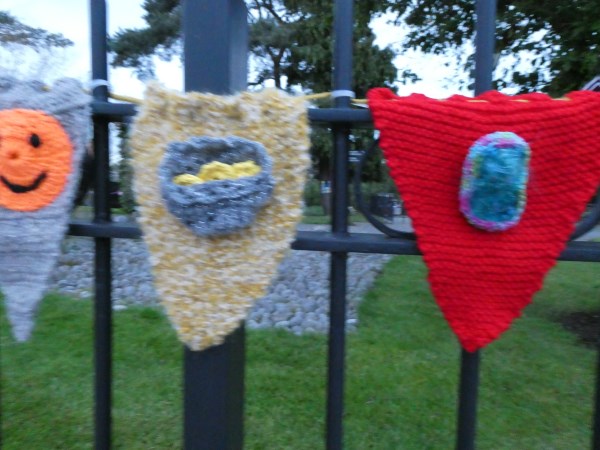 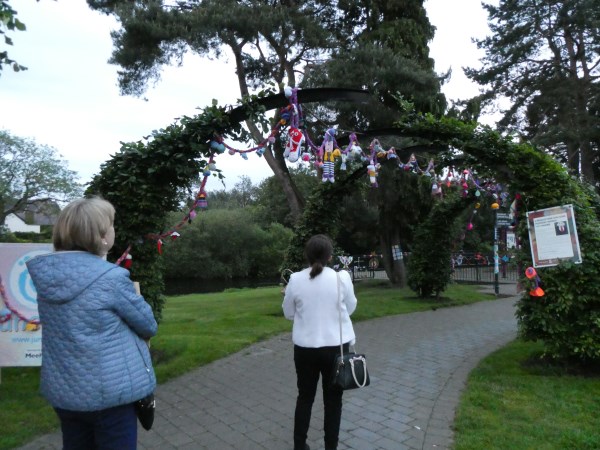 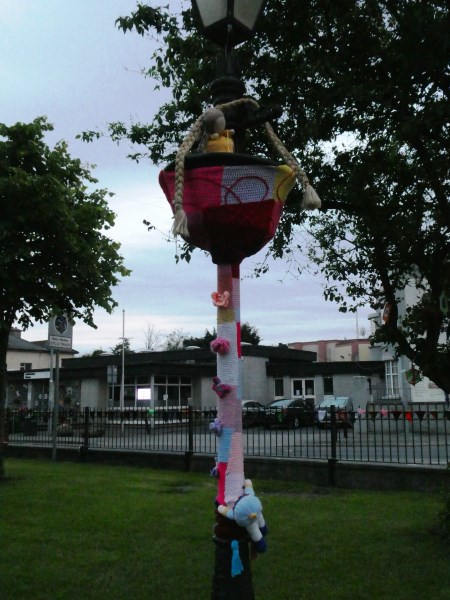 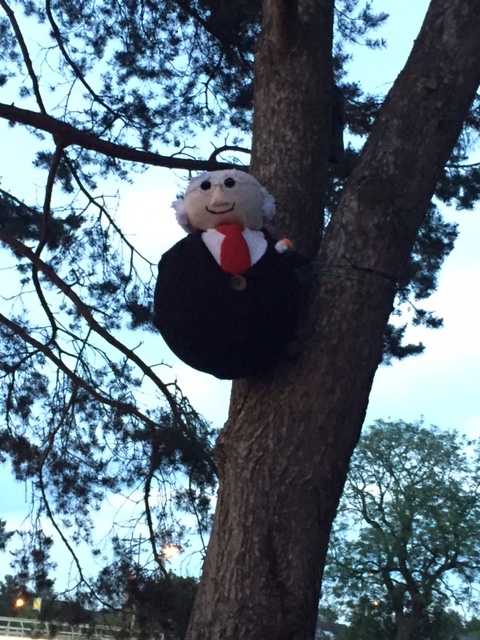 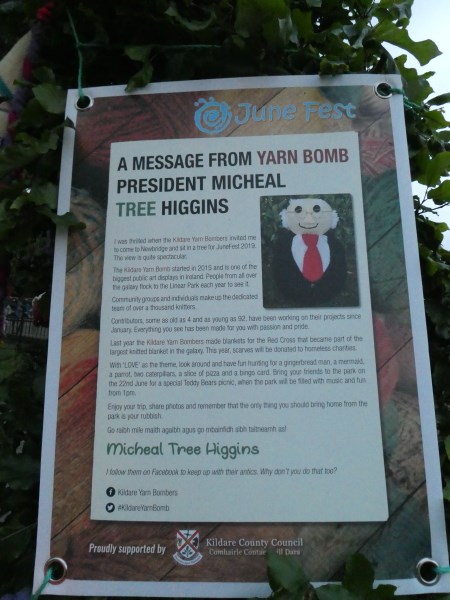 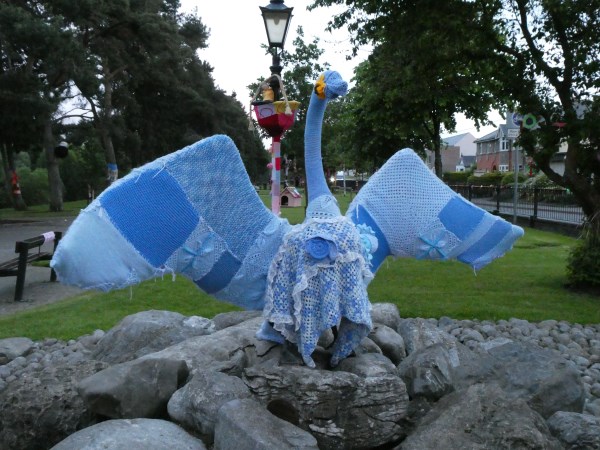 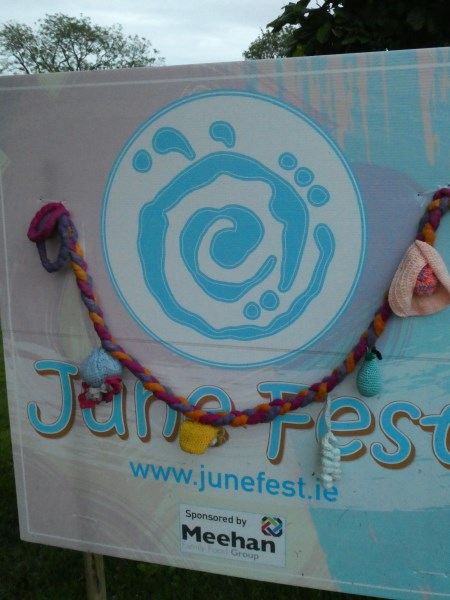 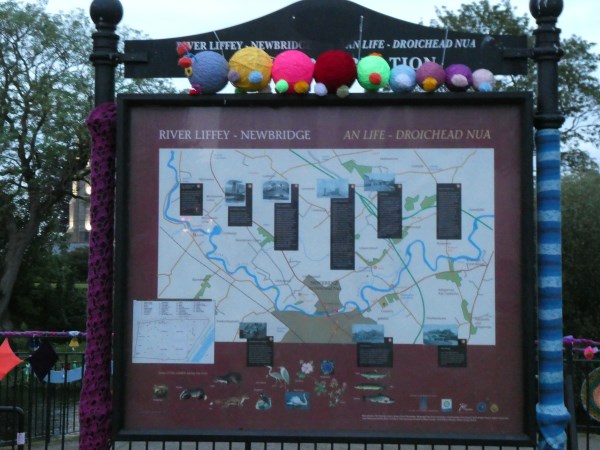 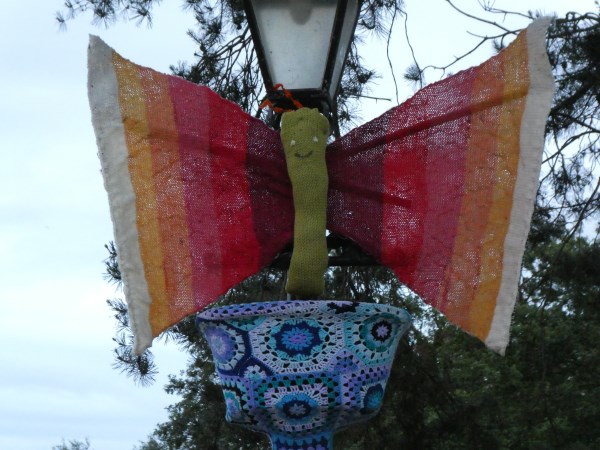 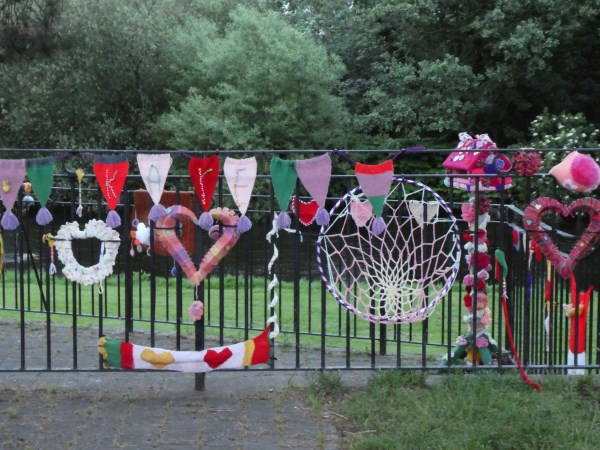 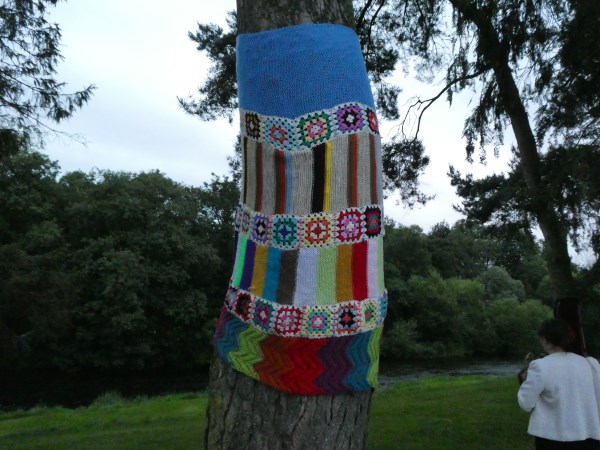 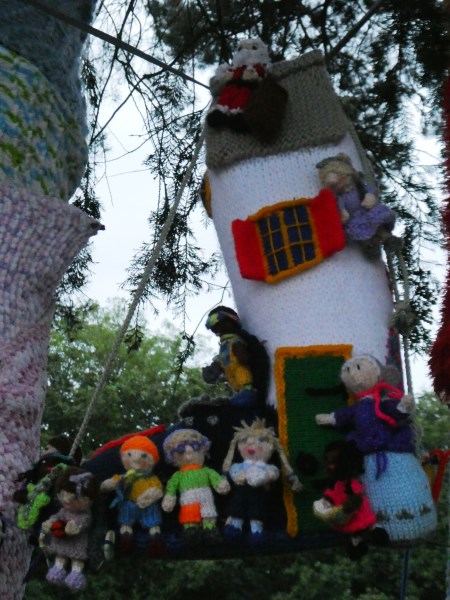 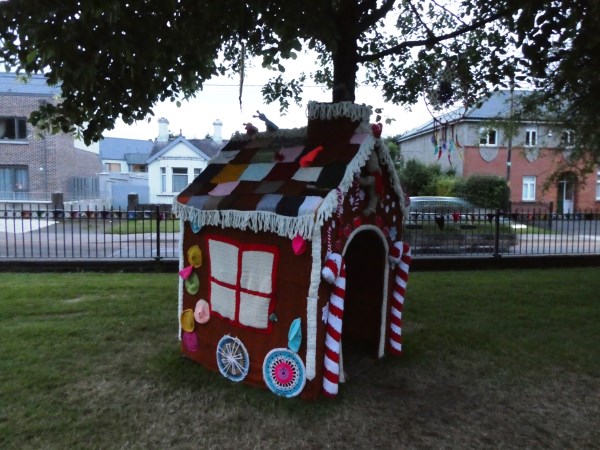 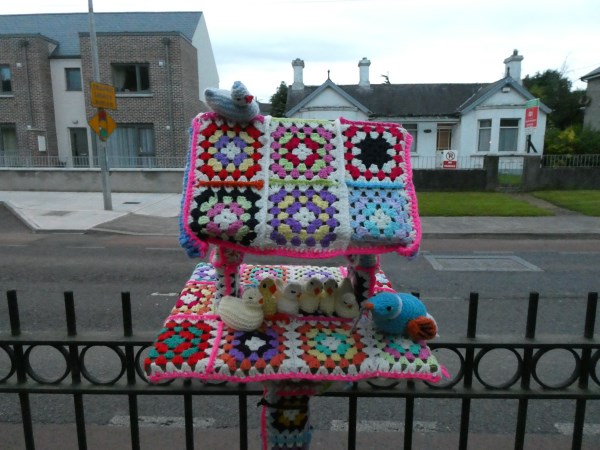 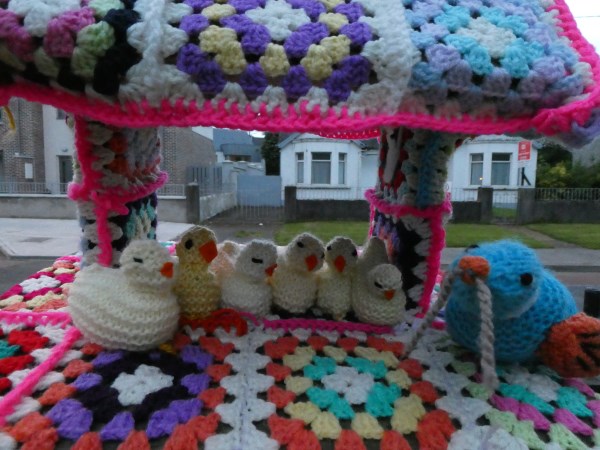 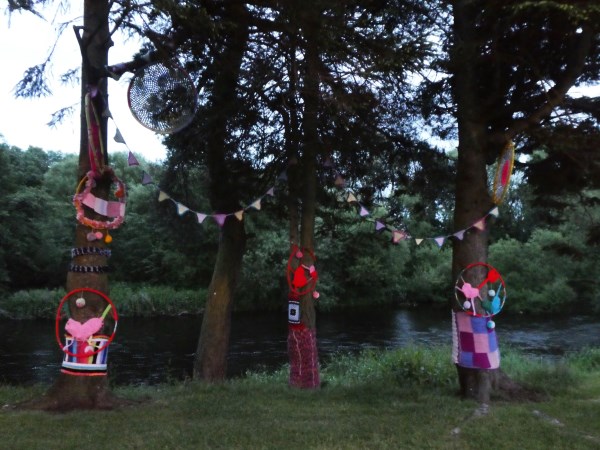 It’s lovely to see this neglected craft getting an airing outdoors for everyone to enjoy. But there is a small practical part of me says that’s it’s a shame to expose these lovingly created artworks to be destroyed by the elements. 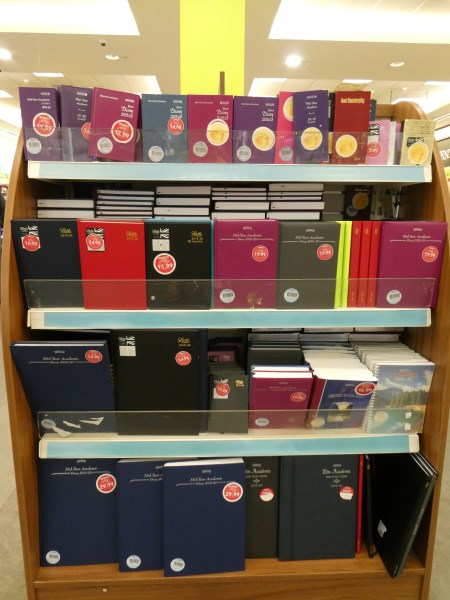 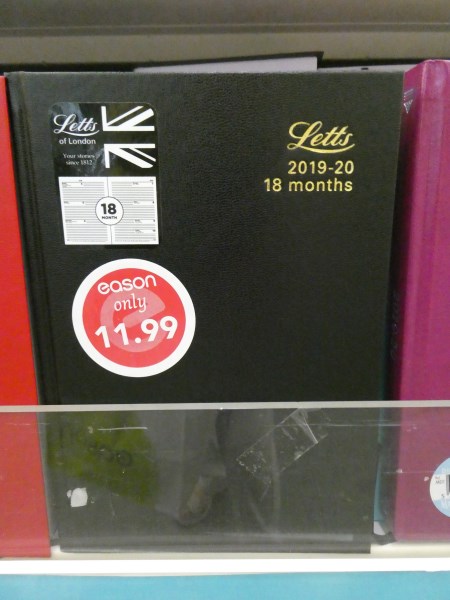 Some Bird Lore from the Dúchas Collection

When people are trapping singing birds they often make a crib. This they do by getting smallchips of wood. they place two chips about a foot from each other, then they get two more the same size and place them on top of the other two about ten or eleven inches apart, then they get two so smaller ones and place them on top of the other two and a smaller distance away and so on till they reach the top with smaller sticks and a smaller distance away. Then they get cord and tie all the corners of the crib up along till they reach the top. then then they get a long cord and tie a stick on to it. They raise up the crib place the stick under it and get a few crumbs of bread and put them under the crib. then if a bird comes the person pulls the cord and if the bird is under the crib it flaps down and the bird is caught inside.

When people are taking the hatch out of a hen they dip the hen into cold water.

Another way for taking the hatch out of a hen is to stick a feather up its nose.

People often “strike” birds with a knife and fork. Once we had a canary in my house and it used never sing unless my mother took out the machine to  sew.

This was collected by W. Keane, Ashe St. Listowel and told by Mrs Keane, Aged 36, of Ashe Street, Listowel for the schools folklore collection of 1937/38

( I am fascinated by the idea of taking the hatch out of a hen. By the way, does a hen have a nose?)

Couture with a Listowel Connection 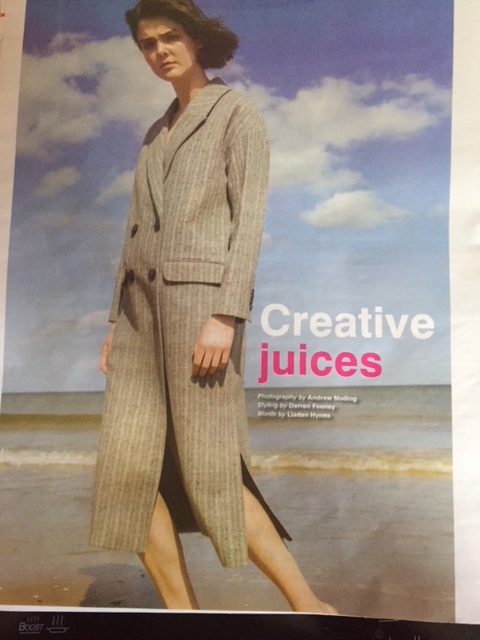 This is a page from last Sundays’ Sunday Independent Life magazine. The feature is about Create, which is Brown Thomas’ showcase of Irish design, which will open in Brown Thomas Dublin in July.

From 70 prospective candidates, Brown Thomas chose 30 designers who met the very high standards required and each of those 30 had to produce a 25 piece collection. As well as fashion there are creations in lots of other fields of design as well.

The picture above is from Anna Guerin’s first collection “The Duellist”. It is a double breasted lambswool coat in pinstripe Donegal tweed which is woven sustainably.

Anna is the daughter of Michael and Áine Guerin of Listowel and she is no stranger to award winning in fashion design and tailoring. She has been working in this field for a while now. This is her first individual collection and when I spoke to her a few weeks ago she has lots more creative ideas in the pipeline.

The above coat looks to me like a garment that would be perfect on Kate Middleton. I hope it catches her eye. We know how much she loves good Irish design and she loves tweed.