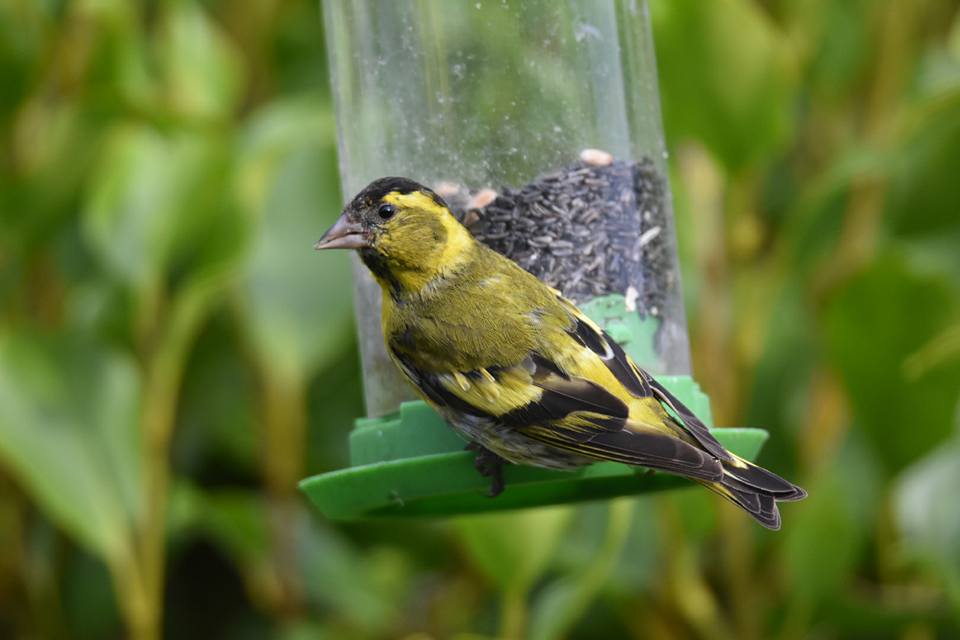 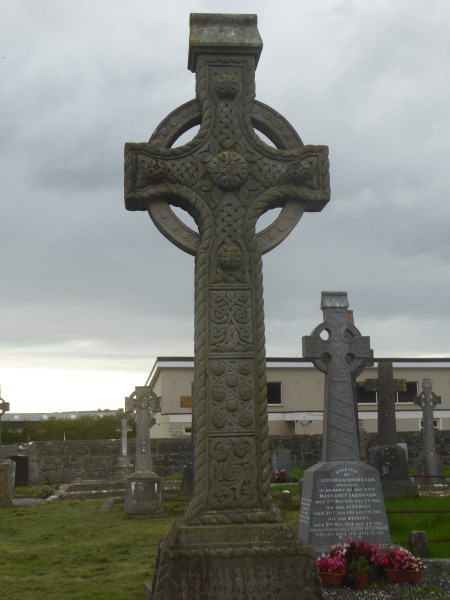 The Celtic cross is a form of Christian cross featuring a nimbus or ring that emerged in Ireland and Britain in the Early Middle Ages. A type of ringed cross, it became widespread through its use in the stone high crosses erected across the islands, especially in regions evangelized by Irish missionaries, from the 9th through the 12th centuries.

A staple of Insular art, the Celtic cross is essentially a Latin cross with a nimbus surrounding the intersection of the arms and stem. Scholars have debated its exact origins, but it is related to earlier crosses featuring rings. The form gained new popularity during the Celtic Revival of the 19th century; the name “Celtic cross” is a convention dating from that time. The shape, usually decorated with interlace and other motifs from Insular art, became popular for funerary monuments and other uses, and has remained so, spreading well beyond Ireland.  (Wikipedia) 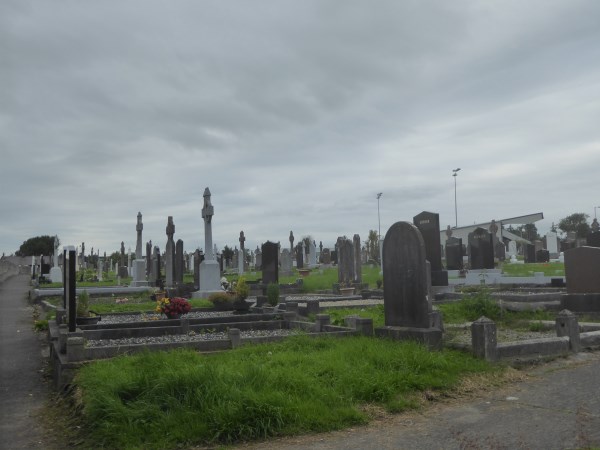 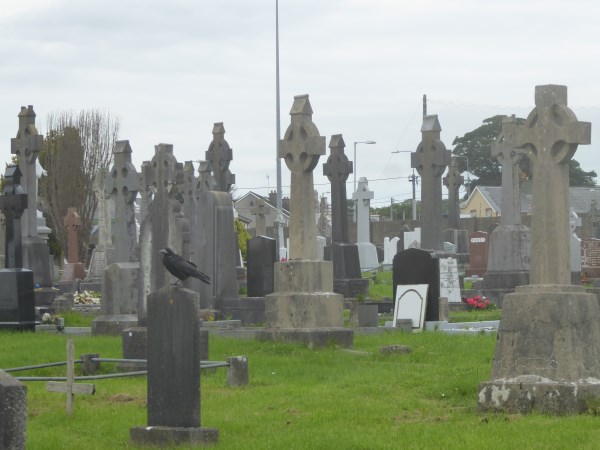 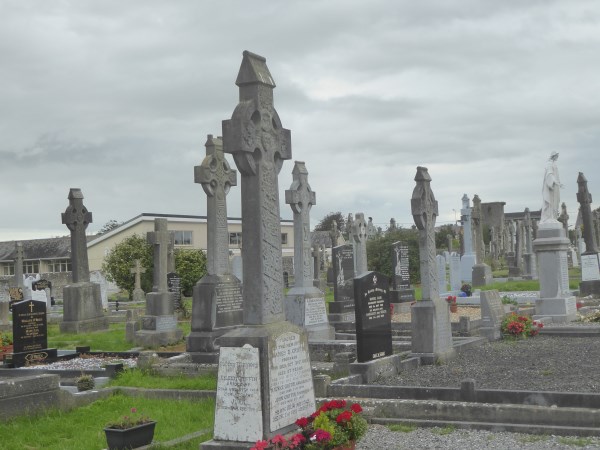 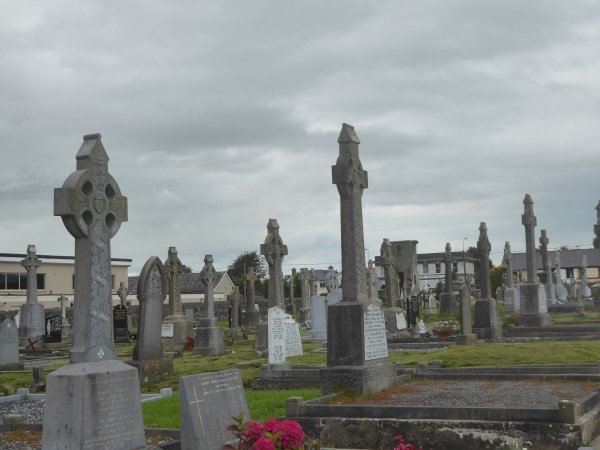 Some of the many celtic crosses in St. Michael’s Graveyard, Listowel 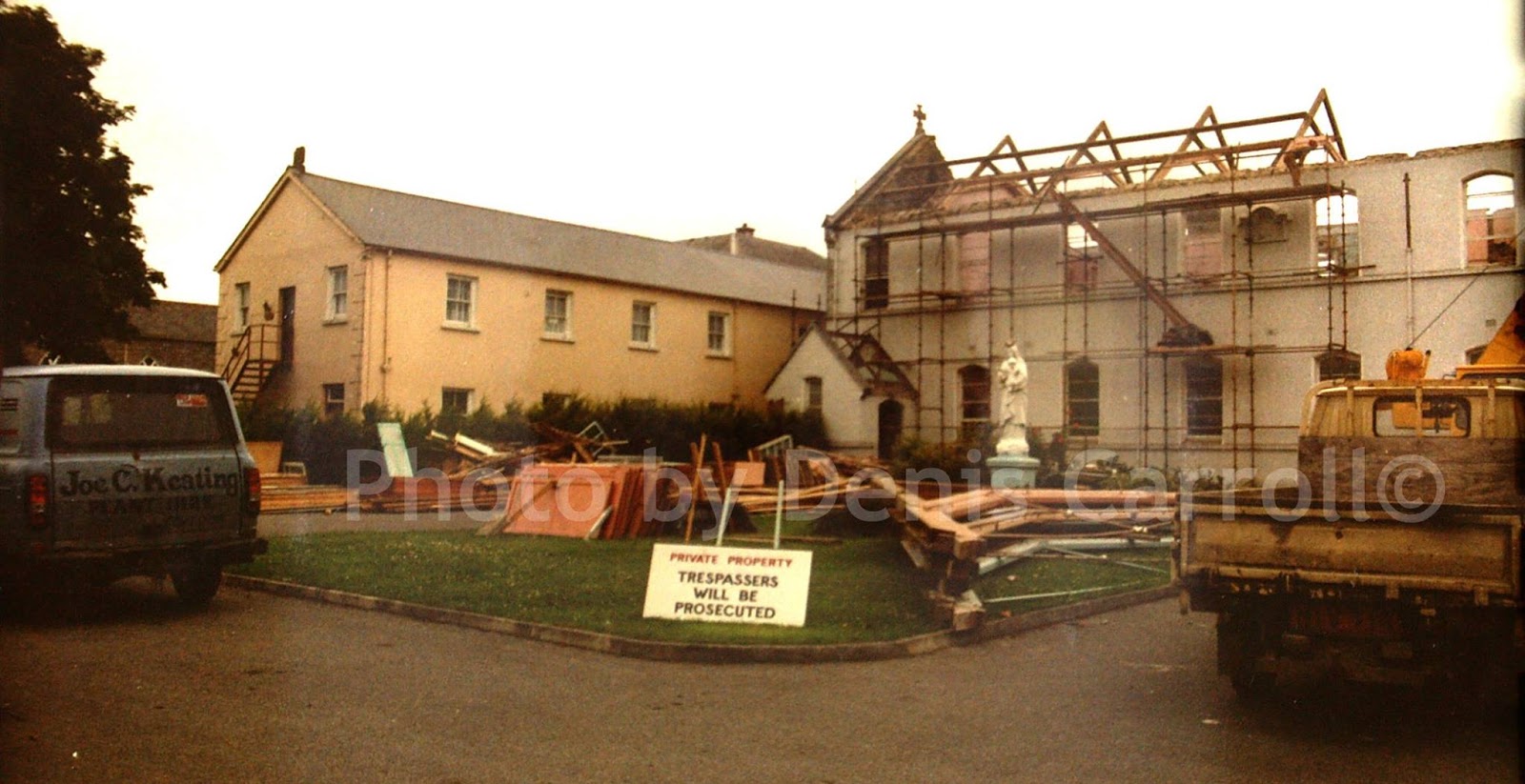 Racecourse Tipsters  by John B. Keane

Racecourse tipping
calls for little or no skill. A peaked cap and a well-worn raincoat is the
usual attire and while a pinched face is an asset, it is not an absolute
necessity. An air of confidentiality also helps. The first practicing tipster I
knew managed to give the impression that he singled out only certain people for
his favours. Before making a sale, he would first look about to make sure that
nobody would know what was happening., thereby convincing the customer that if
too many people knew the identity of the horse the odds would not be
worthwhile. He might also hint that he was a dropout from a racing stable and
was possessed, as a result, of inside information. Throwaways like, “He was
nobbled last time out,” or “He likes it yielding,” or “He’s off today,” never
fail to impress prospective customers.

Now let us look at
the trade’s accouterments. These are simple and few, I am happy to report.
First, one must be able to read and write. Secondly, a large stock of notepaper
and envelopes is essential.

Now let us suppose
that there are nine horses in the first race. Let the tipster write the name of
each horse on a single sheet of notepaper and indicate whether it should be
backed for win, place or each way. Obviously hot favourites should be backed
only for a win. Outsiders should, of course be backed for places or each way.
Place each sheet of notepaper in its own envelope and seal the envelope. Place
the nine sealed envelopes in a larger envelope and indicate clearly that it
contains the entrants for the first race. Follow the same procedure for the
remaining races. Tips should be sold for roughly a pound apiece.

When all are not
sold, the unsold envelopes should be given away for nothing as it is absolutely
vital that all the envelopes be distributed. This guarantees a winner and three
placed horses in every race, which has sufficient runners for place betting.
Let us presume there is place betting on six races on the card. This means that
you will have tipped six winners and twelve placed horses. It also means that
there will be a substantial number of satisfied customers.

During the races
the tipster might repair to a bar and partake of a few bottles of stout and a
ham sandwich. He should always vacate the bar before the last race and place
himself in a conspicuous position near the main exit. There are certain risks
involved. A punter who may have plumped on a loser recommended by the tipster
may well seek physical redress. There is also bound to be heaps of abuse as
naturally he will have tipped far more losers than winners but these are
hazards of the trade and who wants a trade without hazards.

On the credit
side, there is also a good chance that those who have backed winners will not
be unmindful of the man who provided them. Those who back winners celebrate as
a rule with intoxicating liquor and it is widely held that intoxication breeds
generosity.

Racecourse tipping
is open to both sexes. In fact it is a calling at which a presentable female
might excel more than her male counterpart. 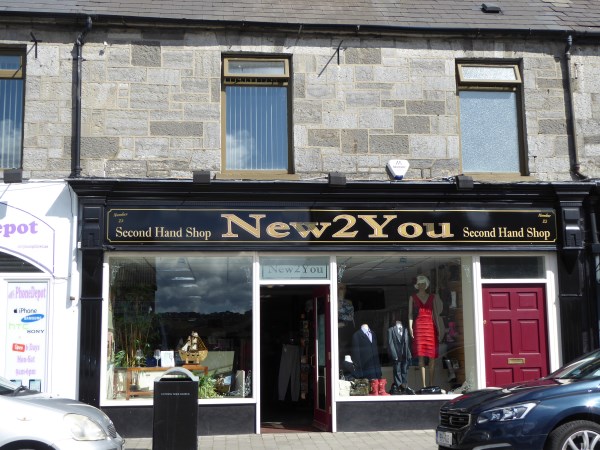 This new second hand shop has opened for business in Market Street. They have everything  from large items of furniture to children’s toys. They have an association with Neurofibromatosis Ireland.

Water Crisis brings out the Best in us

On Sunday last Sept 3 2017, we had a small water crisis when a pump broke down at the Listowel reservoir. Irish Water and the County Council were on it like a shot. The disruption to supply was kept to a minimum and by Monday we had tons of free bottled water available as well as the water from the tanks that had arrived on Sunday. Everyone helped vulnerable neighbours and hospitals and schools were kept supplied. 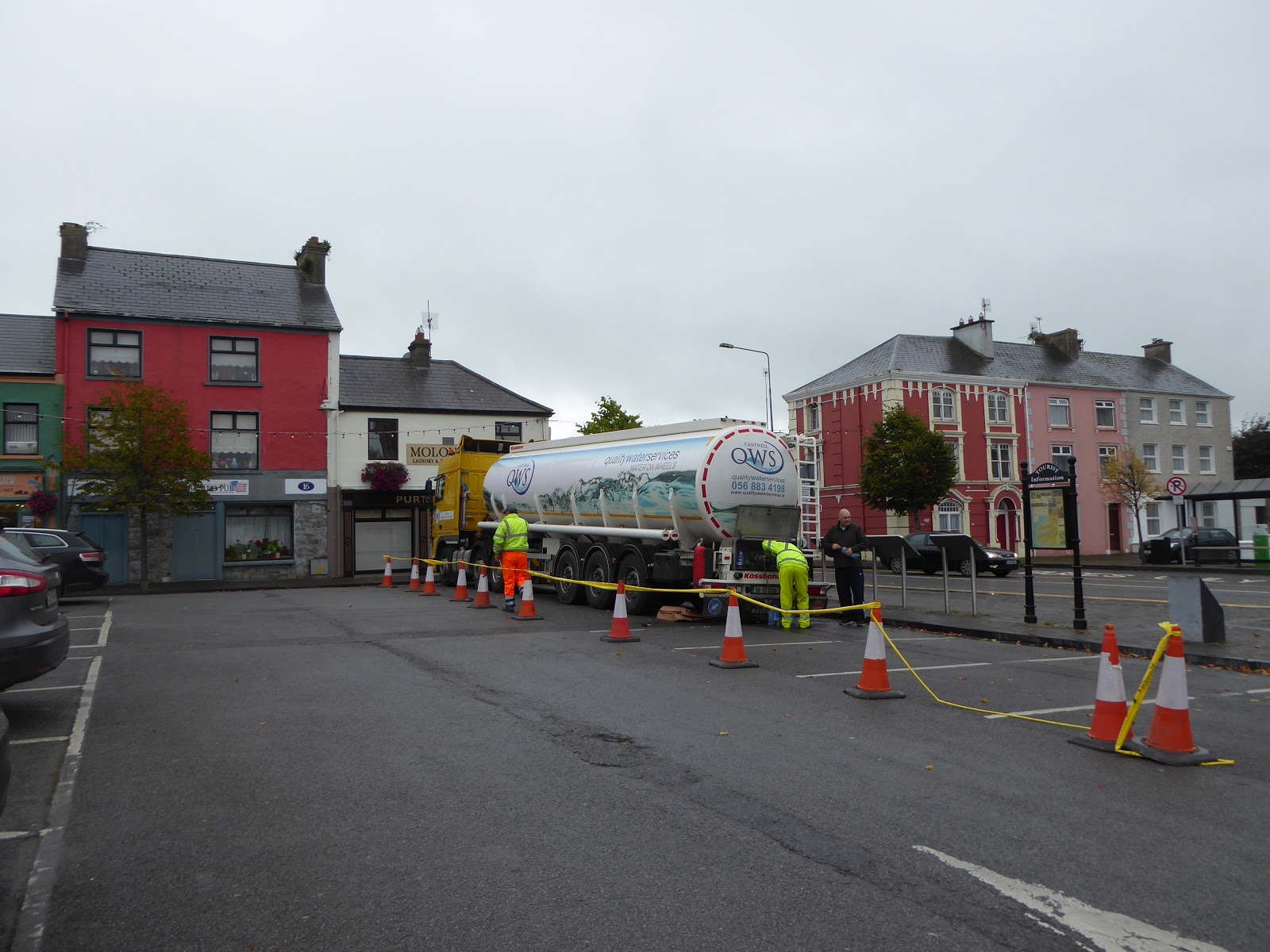 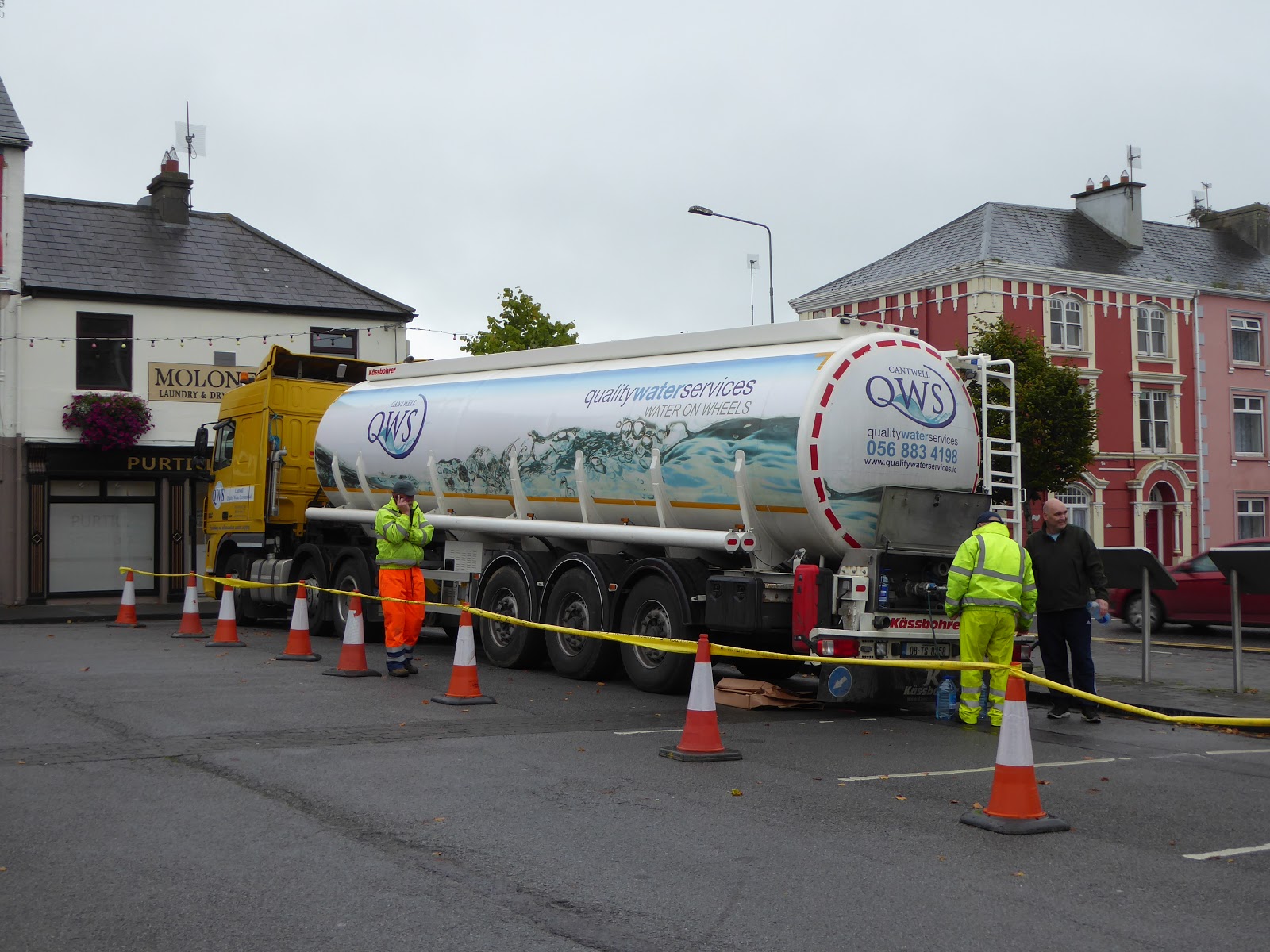 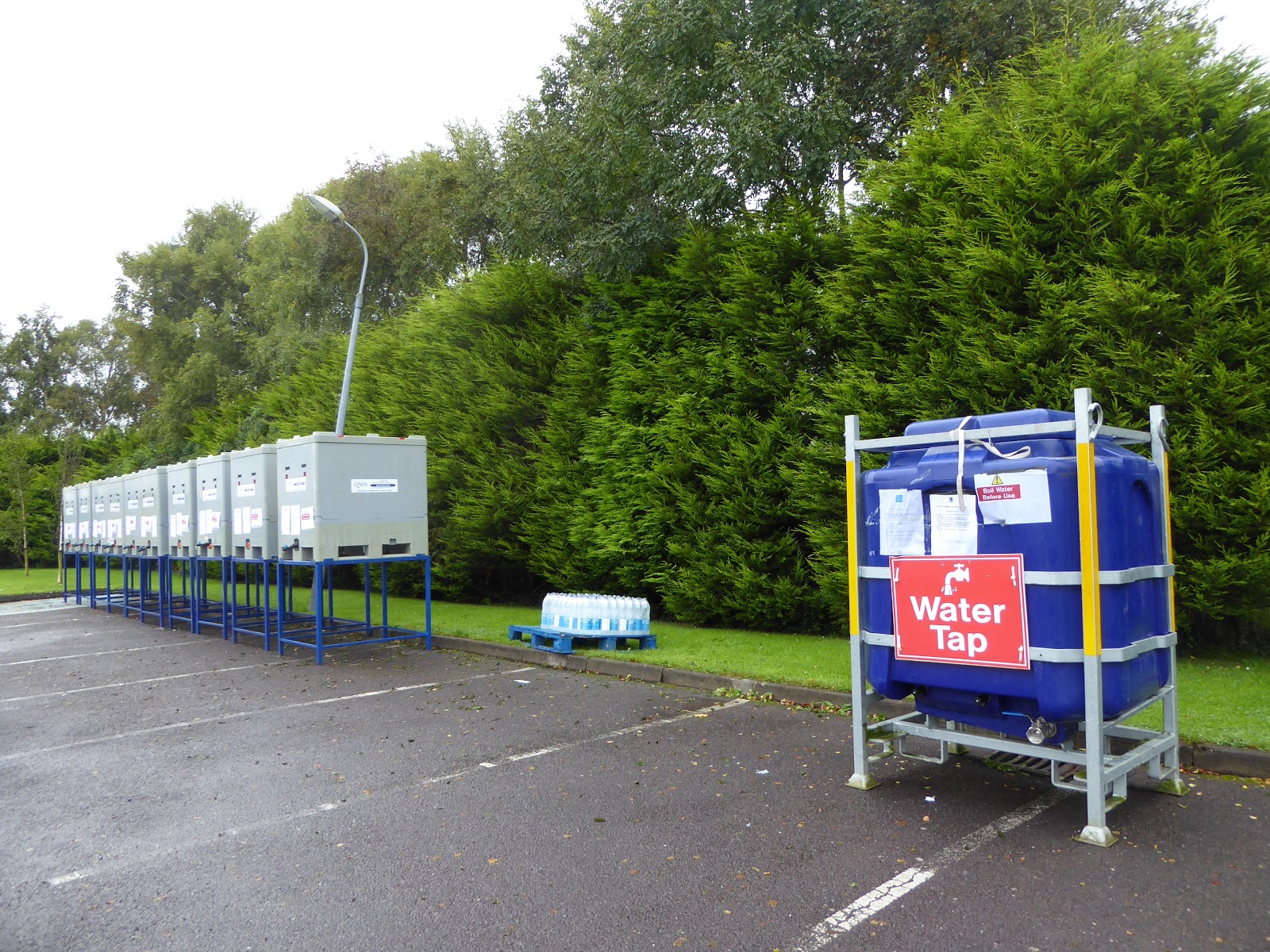 In the carpark opposite Listowel District Council offices

Last week I had the task of delivering you a thought for the day on Radio Kerry.

In case you missed me and would like to listen while the thoughts are still available online, here is the link

Just a Thought by Mary Cogan