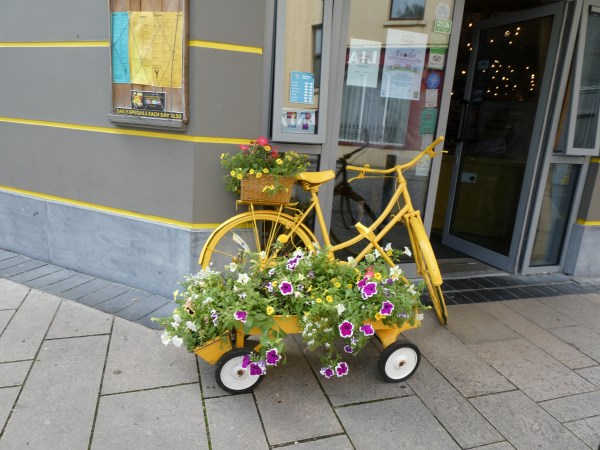 A Corner of Cork 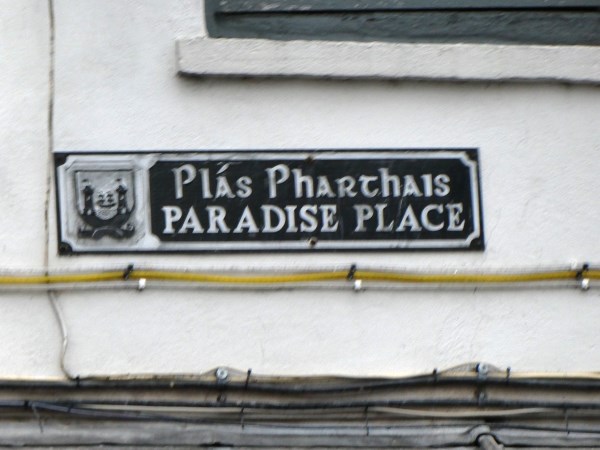 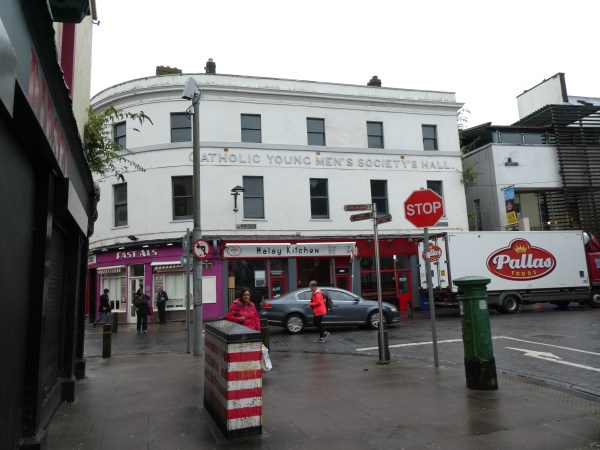 The Catholic Young Men’s Society Hall is located at Paradise Place. It is no longer in use as a hall but is the location of several shops and services. 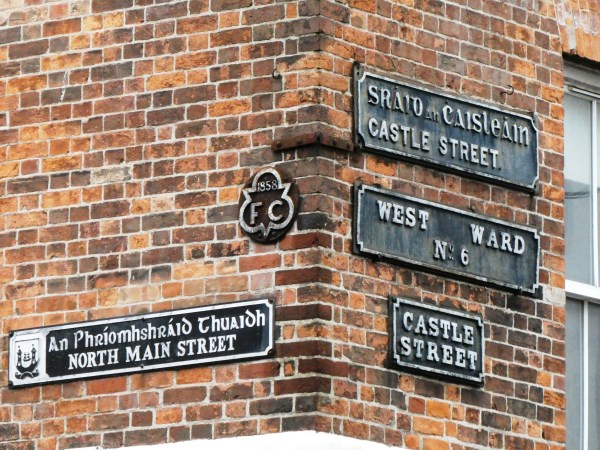 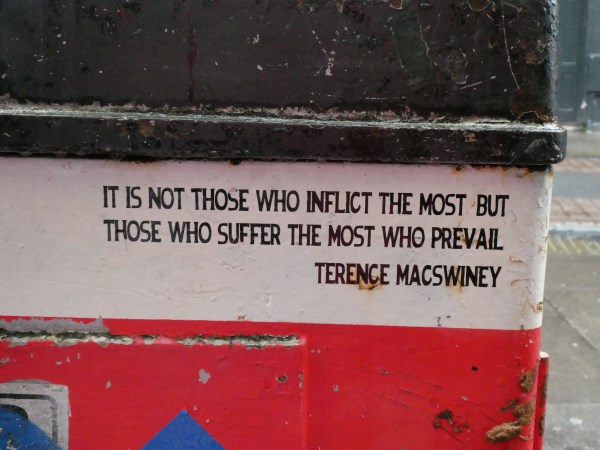 This is the inscription on the red and white utilities box at this corner. Terence MacSwiney was a Lord Mayor of Cork during the War of Independence. He was arrested and imprisoned in Brixton. His death in a British jail after a long hunger strike and unsuccessful attempts at force feeding, gained world wide attention for the cause. He had a huge funeral in Cork where he was regarded as a martyr.

Jer. Kennelly has done a bit of research for us on Bibiana Foran and he found this account in The Kerry Sentinel of 1909.

X Mas Tree in Listowel Workhouse, presented by Mrs B Foran, P.L.G. UDC, she invited a large number of ladies and gentlemen to a party held at the workhouse. Toys, oranges, sweets and cakes were in abundance. Only one girl was sad her doll had a leg and a half, it was soon remedied by giving her another one.

Child Ellie Doner aged 3 and a half sang Guardian Angel. Lizzie Power recited, Hole in my Pocket. Jack Enright , known as Jack the cot, an invalid, recited and sang in a most creditable manner. Entertainment continued with a splendid dance, just like a marriage ball. Mr T M O Connor, proposed a vote of thanks to Mrs Foran, bringing the nights pleasures to a conclusion.

( Isn’t it beyond sad that a little lad known as Jack the cot, and we can guess why since he is described as “an invalid” sang and recited for the great and the good of the town?) 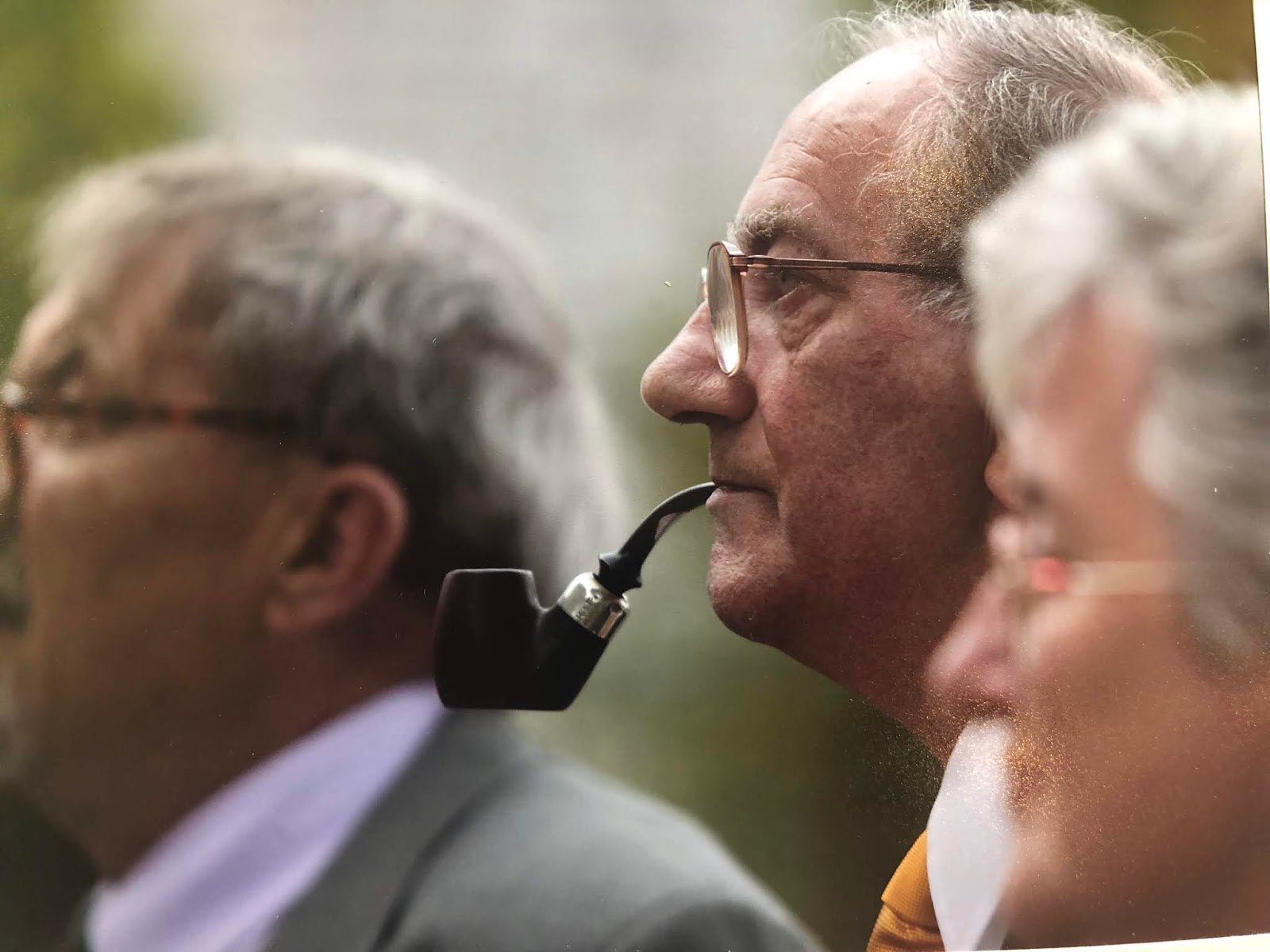 Jimmy Moloney passed away as he had lived, quietly, On May 28th last. May his gentle soul rest in peace.

Here is an obituary sent to us by his daughter, Maeve 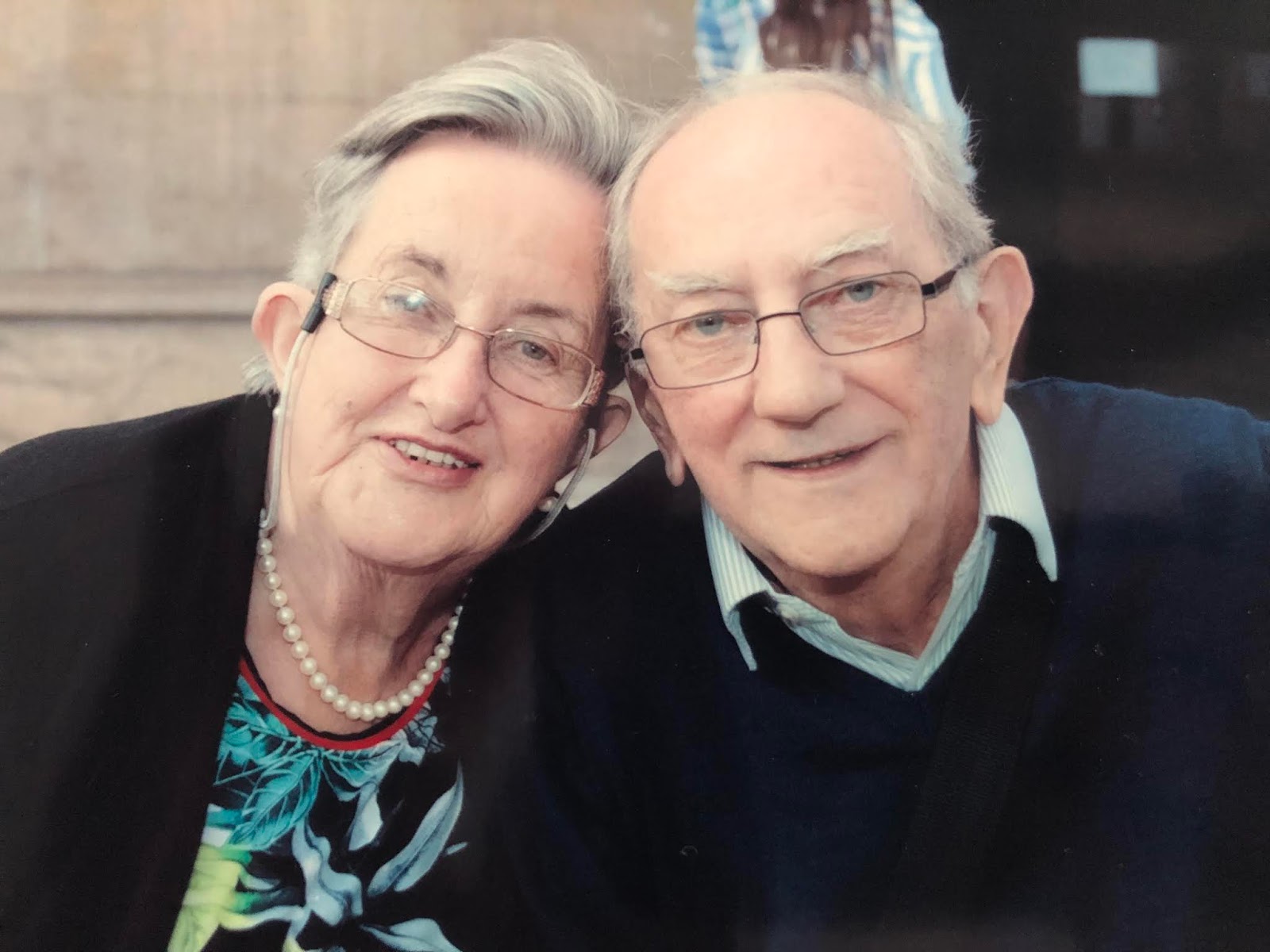 Jimmy was born in Listowel on April 2nd1944, the youngest of three children of Dan (D.J.) Moloney (Lyreacrompane) and Margaret Moloney (née O Connor, of Springmount, Duagh). His earliest years were spent in the Bridge Road, Listowel. In 1948, his parents bought and restored Gurtenard House in which he grew up, brought up his own family and lived until 2006. 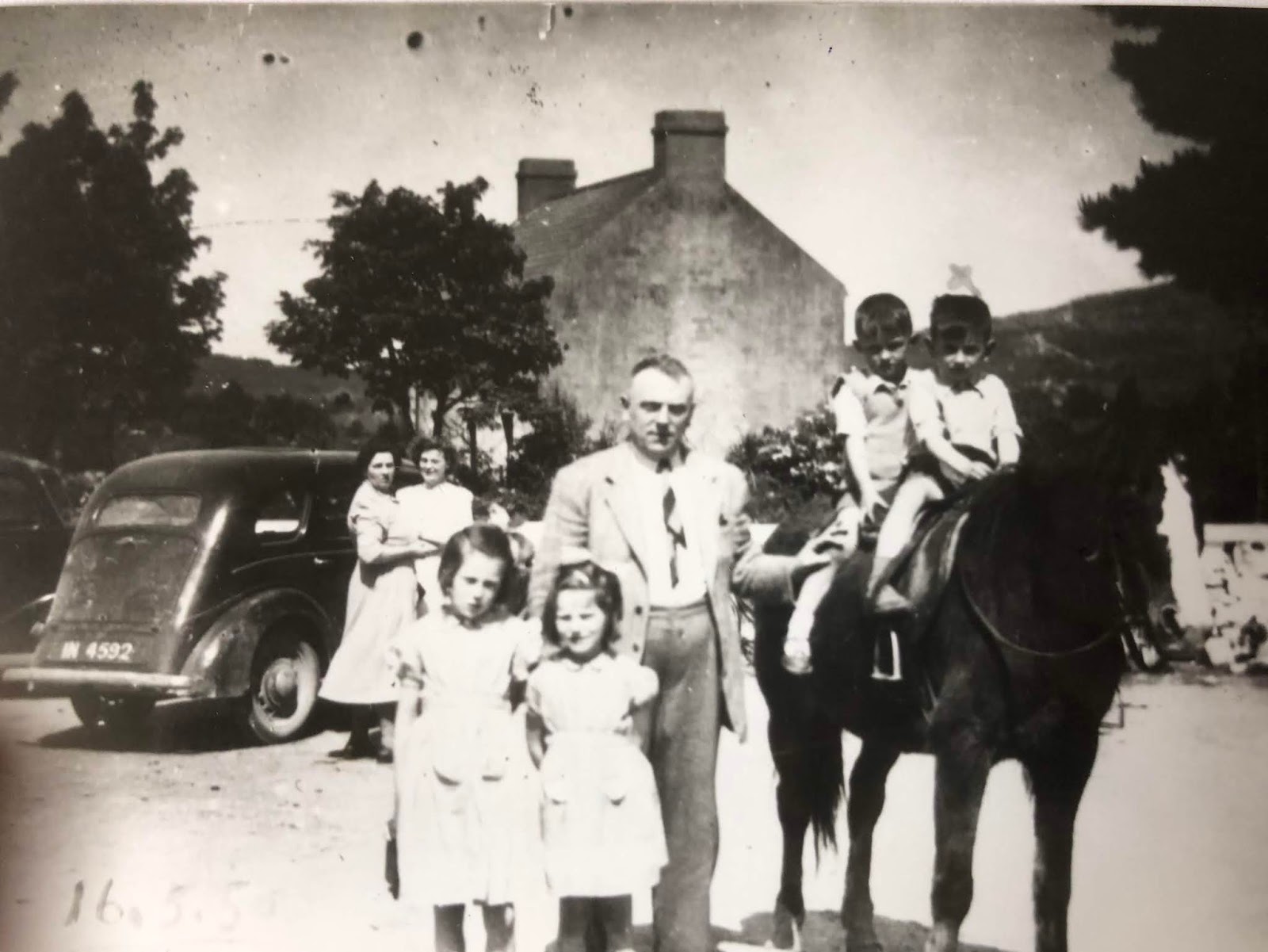 As the younger brother, it was often said his more outgoing older sisters, Kay and Marie, overshadowed him. Quite the contrary; clever and reserved, Jimmy simply watched, observed, and quietly got his point across in his own gentle way.

He was educated in the Boys’ School and St. Michael’s College, Listowel and Newbridge College, Co.Kildare later studying commerce at University College Cork and engineering at Bolton St. College, Dublin.

At the age of 16, he spent a summer in Ventry to advance his Irish language skills at the first Irish college of its kind in the Corca Dhuibhne Gaeltacht. It is questionable whether his Irish improved, however it was there that he met Anne Scully (also 16, daughter of Dr. Paddy Scully, Dingle). His courting strategies included cycling his bicycle along the round topped stone wall opposite Paidi OSé’s family home and “borrowing” cars from Moloney’s Garage to meet Anne in Tralee for dances at the Brandon Hotel. 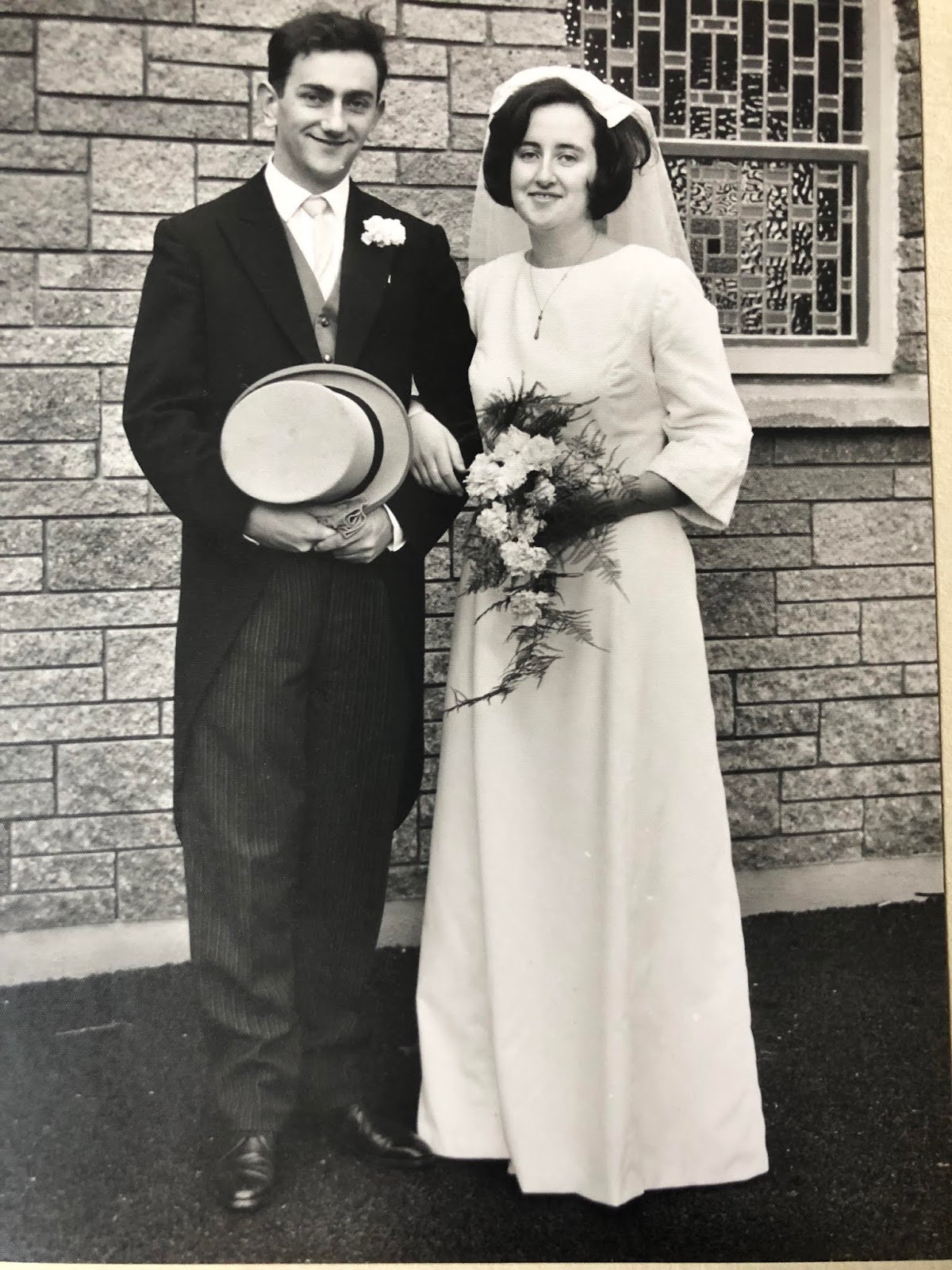 Anne and Jimmy had a Christmas wedding at Muckross Church, Killarney on 29thDecember 1965, both aged just 21.They honeymooned in London and the south of Spain, where they would return many times. They lived at Gurtenard House and Jimmy successfully ran Moloney’s Garage in Market Street and William Street, Listowel until the mid-1980s. 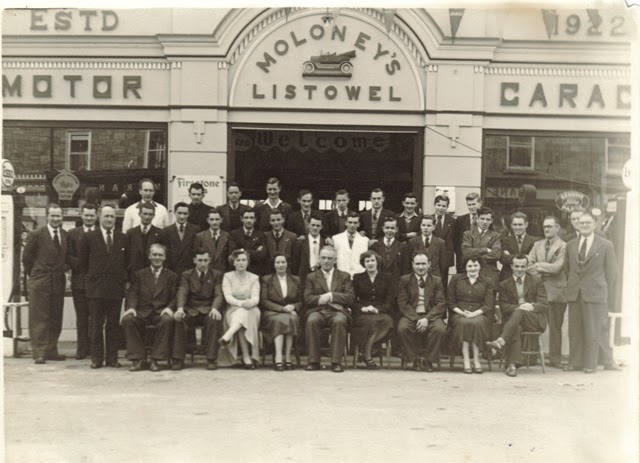 Moloney’s Garage, a Main Ford Dealership, had been founded in 1945 by his father, D.J., and was a thriving business and employer in the town for many decades. At a time when opportunities for school leavers in North Kerry would have been few, scores of young trainees arrived at Moloney’s Garage as apprentice mechanics, pump attendants, panel beaters, accountants and secretaries and learned their craft in their own hometown. The regard in which Jimmy and D.J. were held was deeply felt by the Moloney family at Jimmy’s funeral where dozens of former employees and colleagues from years gone by paid their respects and told stories of a wonderful workplace and how they “got their start” at Moloney’s. 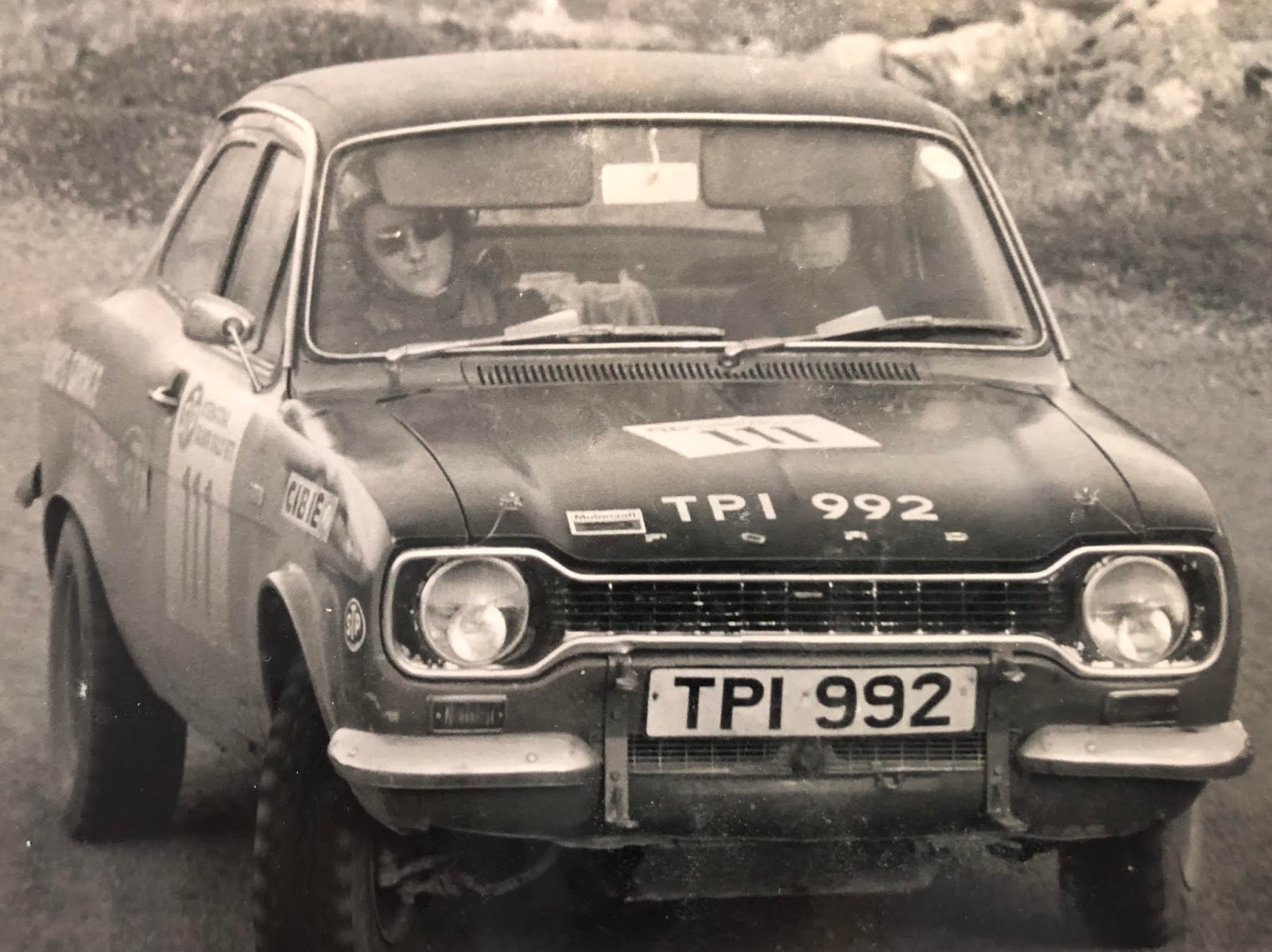 Not surprisingly, he was an avid fan of motor sports in all its forms. A founder member of Kerry Motor Club and its secretary for much of the 1970s, Jimmy was an accomplished rally driver in his own right, competing in rallies all over Ireland and the UK. He was a talented mechanic and restored numerous vintage and veteran cars as well as being an early and enthusiastic member of the Kingdom Veteran and Vintage Car club founded in 1979. The club, which celebrates its 40thAnniversary this year, organised veteran and vintage car runs throughout the county and beyond, most notably the Annual Ring of Kerry run. There are many accounts from those times of blown gaskets, runaway cars, golf clubhouses being mistaken for hotels and many other (mis) adventures. In 2010 he was awarded the Automobile Association’s commemorative centenary award as Kerry’s longest serving member as well as having led numerous emergency rescues to car crash sites and breakdowns throughout the county for the association.

Jimmy could fix anything and was as comfortable up a ladder as under the bonnet of a car. One of his many hobbies was woodturning, reflected in his numerous intricate sculptures and woodcarvings. An innovative problem solver, his many inventions included some unusual security and surveillance systems as well as a number of quite peculiar washing machines, ironing contraptions and pest deterrents.

Widely read and widely travelled, Jimmy had been planning a tour of Holland, Germany, France and Switzerland at the time of his death, one of the highlights of which was to be a high-speed drive on the German autobahns with his son-in-law, Frank.

On the Sunday evening before his passing, he had attended the count of the recent County Council elections and proudly saw his youngest son, Jimmy re-elected to Kerry County Council to represent Listowel and Fianna Fáil.

Jimmy Snr died as he had lived, quietly and without fuss. He will be sadly missed by his sisters Kay and Marie, sons Dan, Conor and Jimmy, daughter Maeve, grandsons Isaac, Oscar, Max and Tom, daughter-in-law Una, son-in-law Frank and his wide network of relatives and friends.

At the Conservation Seminar

At last week’s conservation seminar in Kerry Writers’ Museum, we looked at how we are doing so far with the work of maximising our existing heritage assets and how we can improve on things in the future.

We identified Childers’ Park as one of our greatest amenities. It is the only green flag municipal park in Ireland.

Work is continuing on accessing the lios (ring fort) after which the town is named.

We have 400 free car parking spaces. These should be more than adequate for visitors and shoppers.

The work of the Tidy Town committee was widely praised and the Listowel Business and Community Alliance has already got stuck in and its new website, Listowel.ie will be launched in the very near future. A website with up to date information on what is going  on in town is a necessity.

The success of the recent Revival music festival was mentioned and all of the town’s many festivals were noted a major assets to the touristm offering in Listowel.

Pauline Dennigan sent me the below photos 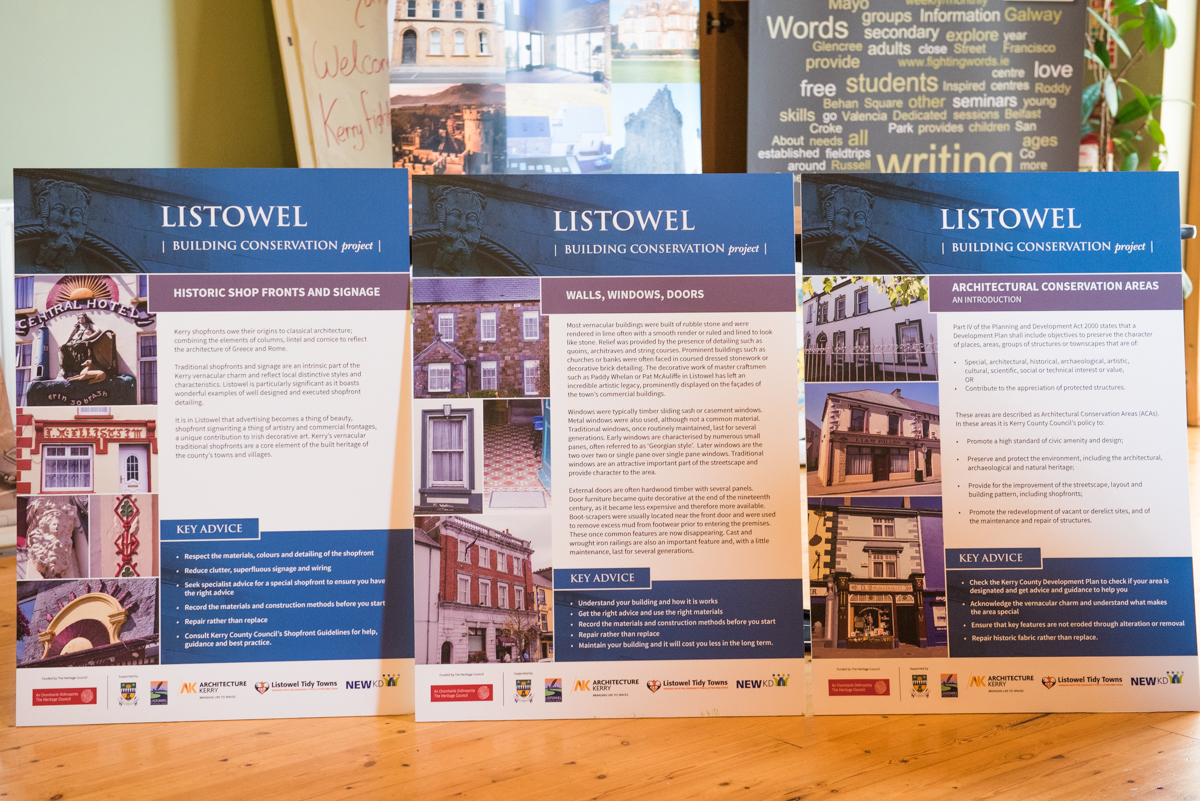 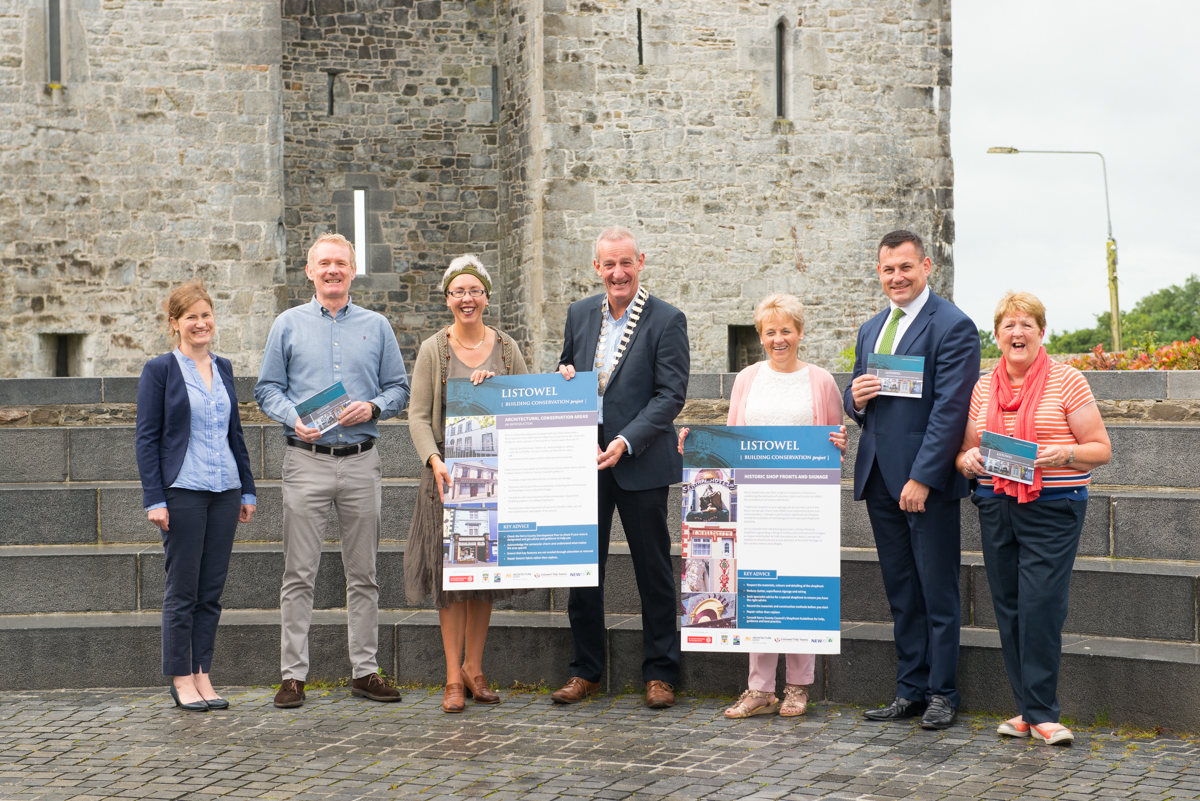 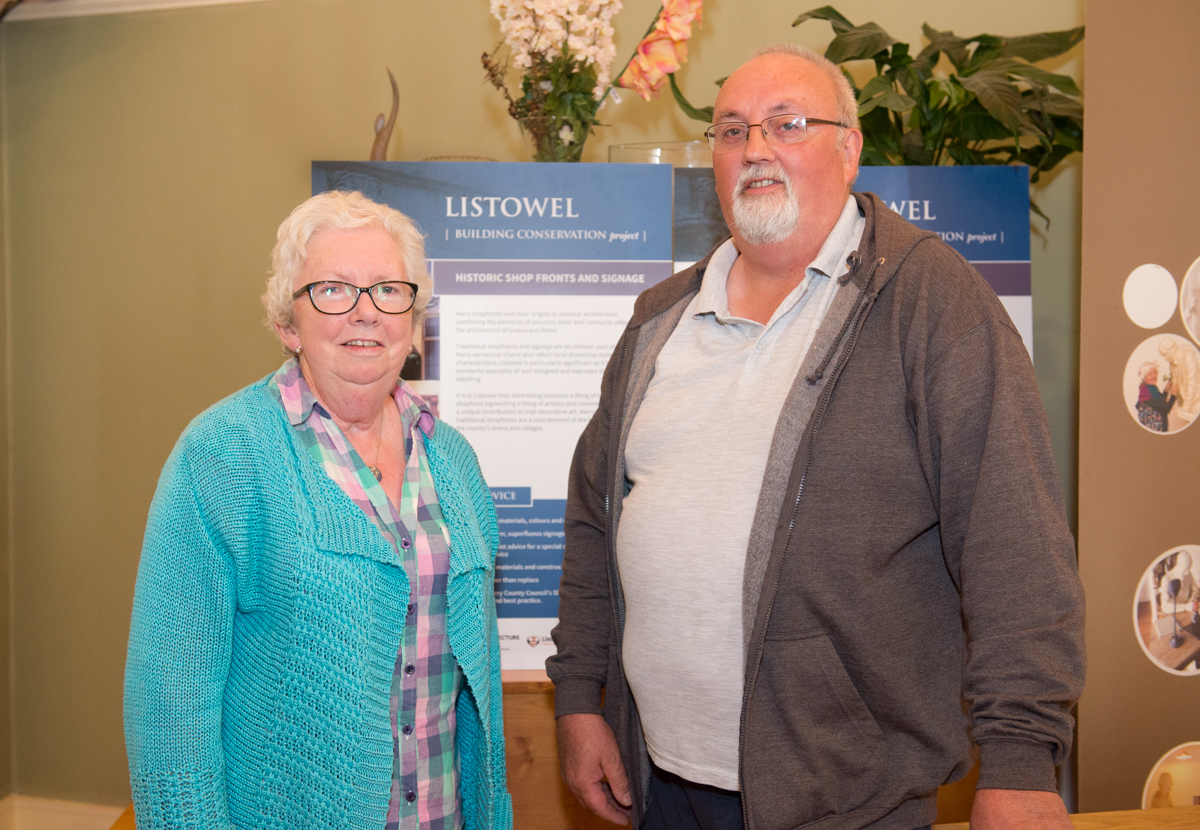 I met Martin Chute, master painter and sign writer at the seminar