(From the National Library’s Collection) 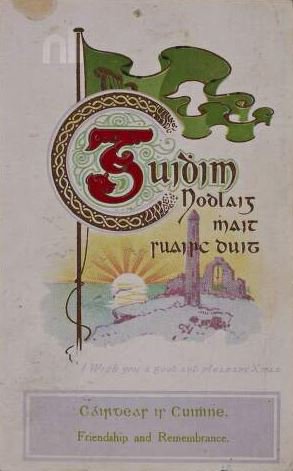 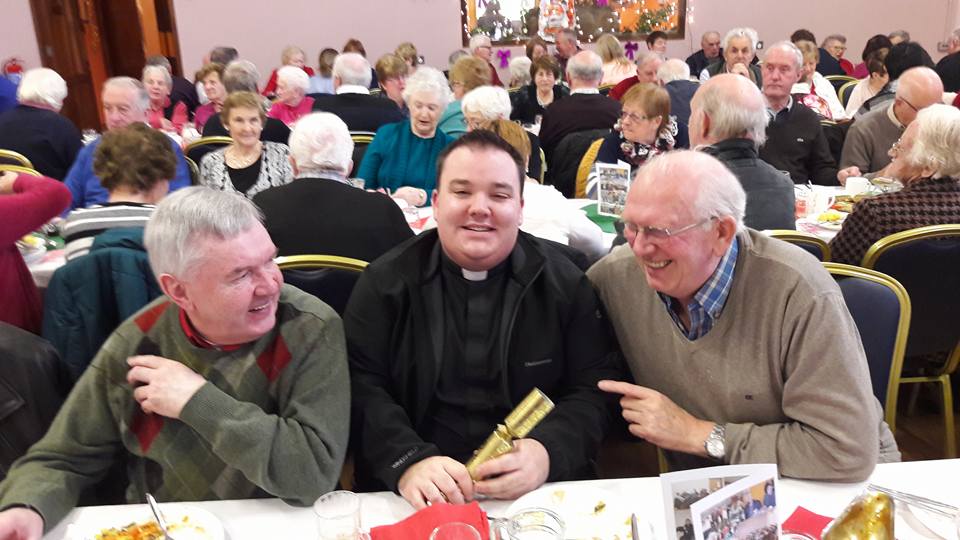 Fr. Seán enjoying the banter in Lyre at Christmas 2016

Memories of Christmas in Ireland in the 40 and early
50

Going to the wood
to cut the holly which grew wild, and the moss to put on the crib.

Christmas Eve
cleaning the house, the excitement of setting up the crib filling jam jars with
sand and putting the candles in them, decorating them with crepe paper, putting
up paper chains, my mother would have made a large Christmas pudding in a
gallon and put it aside

The turkey or
goose was bought at the local market and plucked by our neighbour Bill Boyle. He
must have done it for everyone because the road would be covered in feathers.
The innards were still warm when it was cleaned out, that was all on Christmas Eve
so it was fresh.

We were not well
off but we were lucky as my father was always working, we were not short of anything.
At that time in Kerry there was a lot of unemployment.

The shops mam
shopped in during the year gave a Christmas box. One shop would give tea, sugar
and maybe a pot of jam. That shop was called Jet Stacks and it is not there now.
The butcher Murphy’s would send Danny to deliver us maybe a large piece of lamb,
of course it would be delivered by him on his bicycle with a basket in front

I can also remember
a donkey and cart outside the shops with a tea chest and all the shopping would
be put into it. These people would be from the country and would not come to
town again until after Christmas.

There was a shop
called Fitzgibbons and we would pay in whatever we could afford for toys or
anything else. I paid in sixpence a week for a sewing box and I still had it
when I got married. Mam paid every week for the Nativity figures for the crib I
have never seen anything so beautiful since.

The ham would be
on the boil and with the crib set up. The candles would be lit by the youngest
member of the house, I think at 7o clock

Our clean clothes
would be kept warm over the range ready for midnight mass.

Going out on the
frosty night and seeing all the windows with lighted candles was wonderful.

Home after mass a
warm fire in the range a slice of the ham or maybe a fry! Our stockings would
be hanging at the end of the bed. We did not get much; my dad was very good
with his hands and would make things for us. He made a scooter once and a
rocking horse.

My brother Neil
wanted a mouth organ and it was like the song scarlet ribbons, dad went to so
many shops until he got one for him. I was too young to remember that but mam
told that story.

Christmas morning
I will never forget waking up to the smell of the turkey roasting.

Up quickly and
look if Santa had come, our stockings might have an orange, we always got
something. I remember getting roller skates; I also remember getting a fairisle
jumper from Santa. The problem was I had seen my aunt knitting it. All the
children would be out in the Avenue with their new toys to show off.

Before dinner our
neighbour Paddy Galvin would come in to wish a Happy Christmas and mam would
give him a bottle of stout. I think that was the only time he ever called in.
We would have lemonade and stout in for Christmas.

Dinner was
wonderful, our Mam was a great cook. There was Mam Dad, Nelie, Paddy, Doreen
and myself. My brother Junie came along later, and after we would wrap up warm
and visit the cribs; one in each church, hospital, convent and St Marys and
bring home a bit of straw for our crib which I think was blessed.

More food when we
got home

Bed and looking
forward to St Stephens day and the Wren Boys, no cooking on that day we finished
up the leftovers.

Giving Back at Christmas 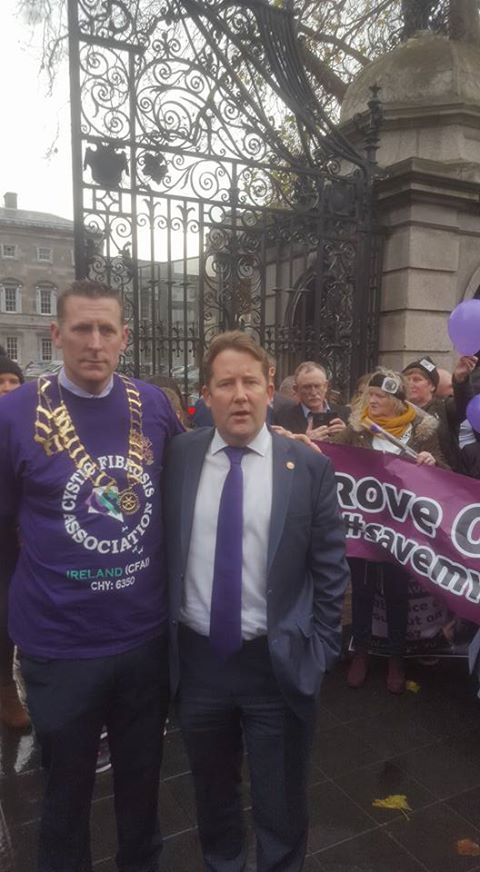 The man on the left is Michael McEnery. He comes from Causeway and now lives in Dublin where he is president of his local Fingal Rotary Club.

This Christmas he is putting his passion for running to use to help others. He is currently undertaking

running from Dublin to Kerry to raise funds for Cystic Fibrosis and Cancer charities. 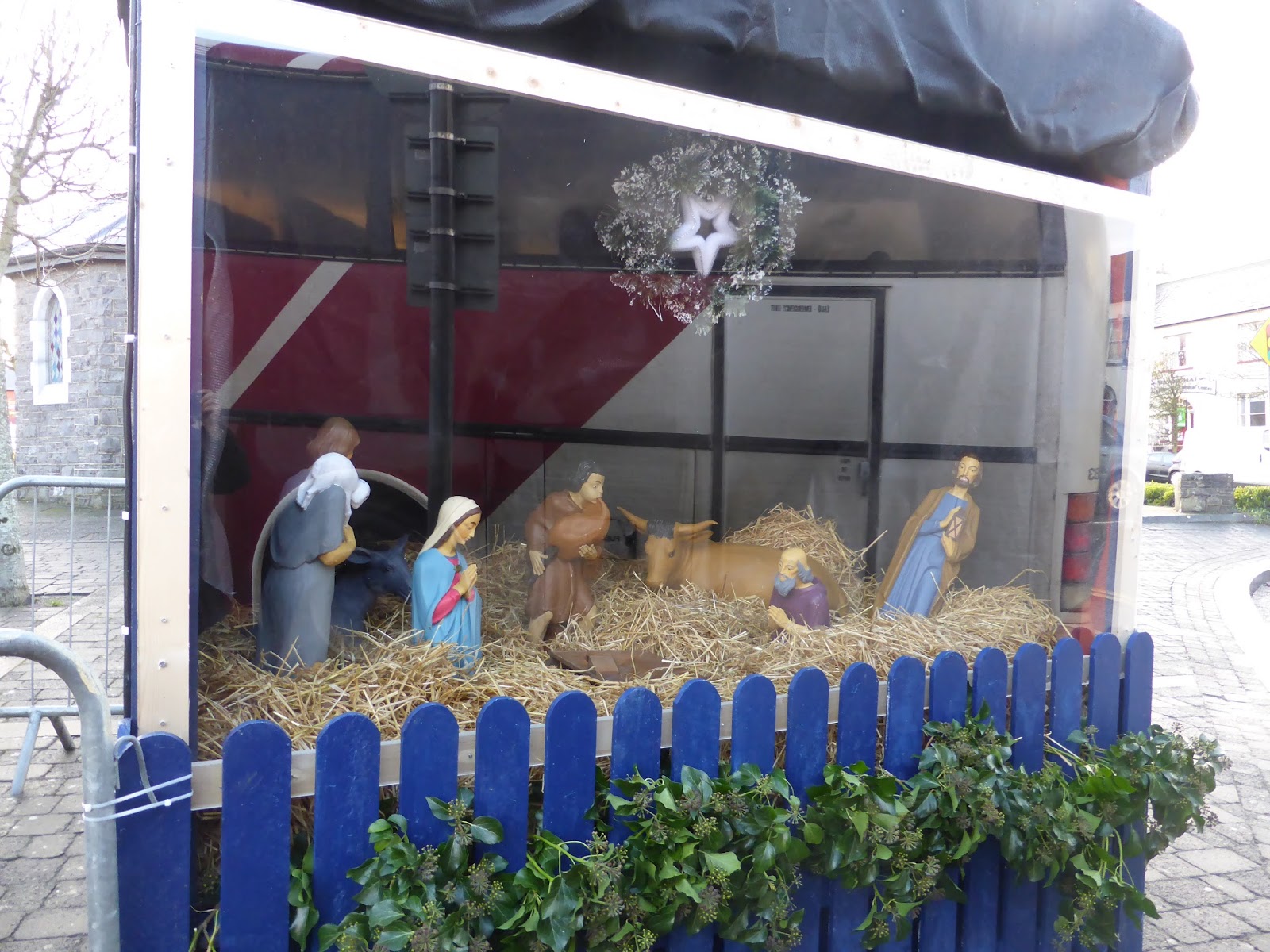 Our  crib looks lovely in The Square.

A Story of a Christmas Card in the digital age 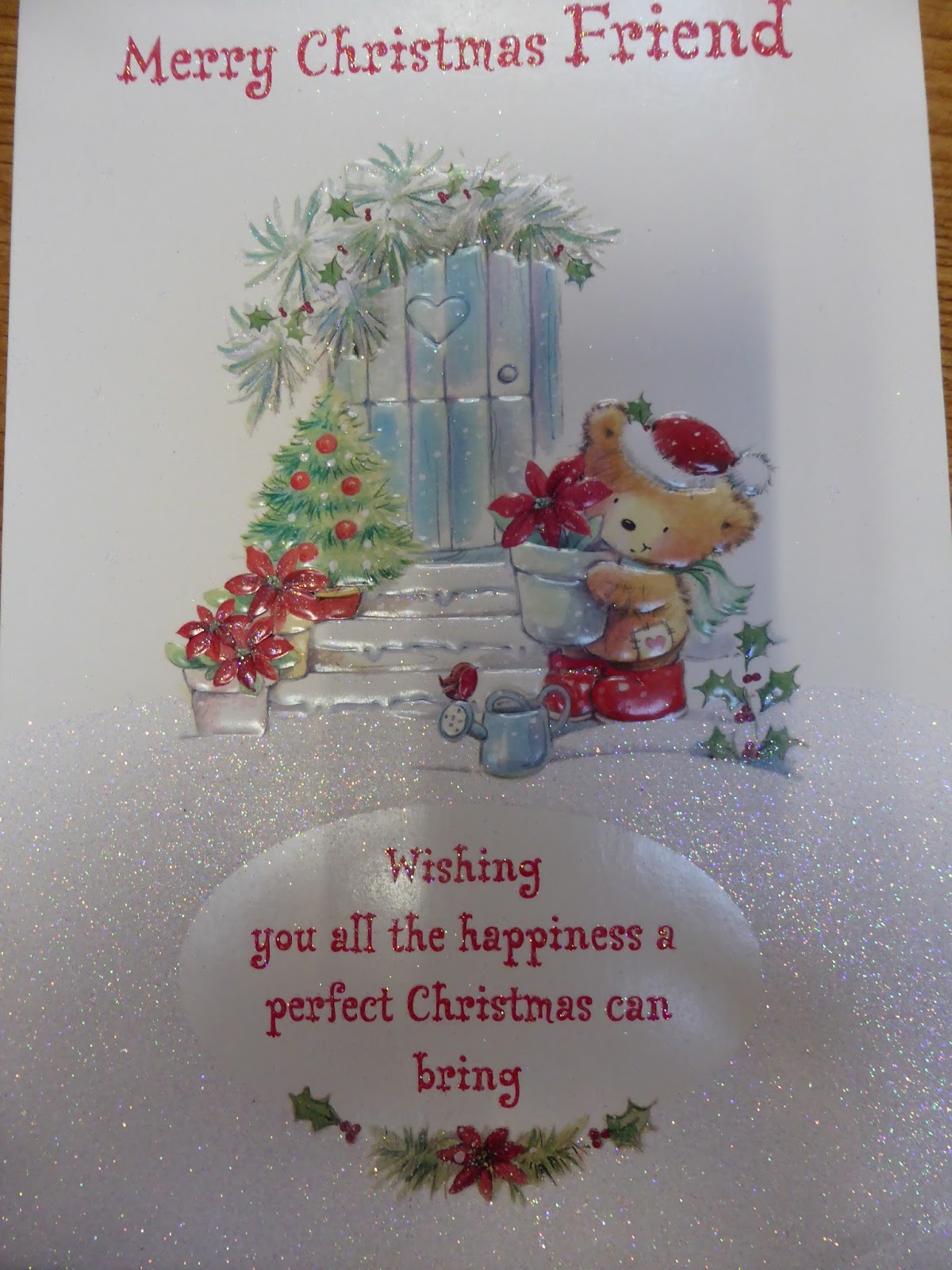 This card made my day.

Here is the back story.

The card was sent to me by a lovely lady called Nancy Kelly. Nancy grew up in O’Connell’s Avenue but she has lived in London for many years now. She loves to keep in touch with home through Listowel Connection. She enjoys the photographs and the stories and even though her eyesight is poor now, she made the effort to write me a card to say thanks.

Now here is the extraordinary part. Nancy is my digital friend. We have never met and have never corresponded except on Facebook. So Nancy did not know my address. This is what she did. 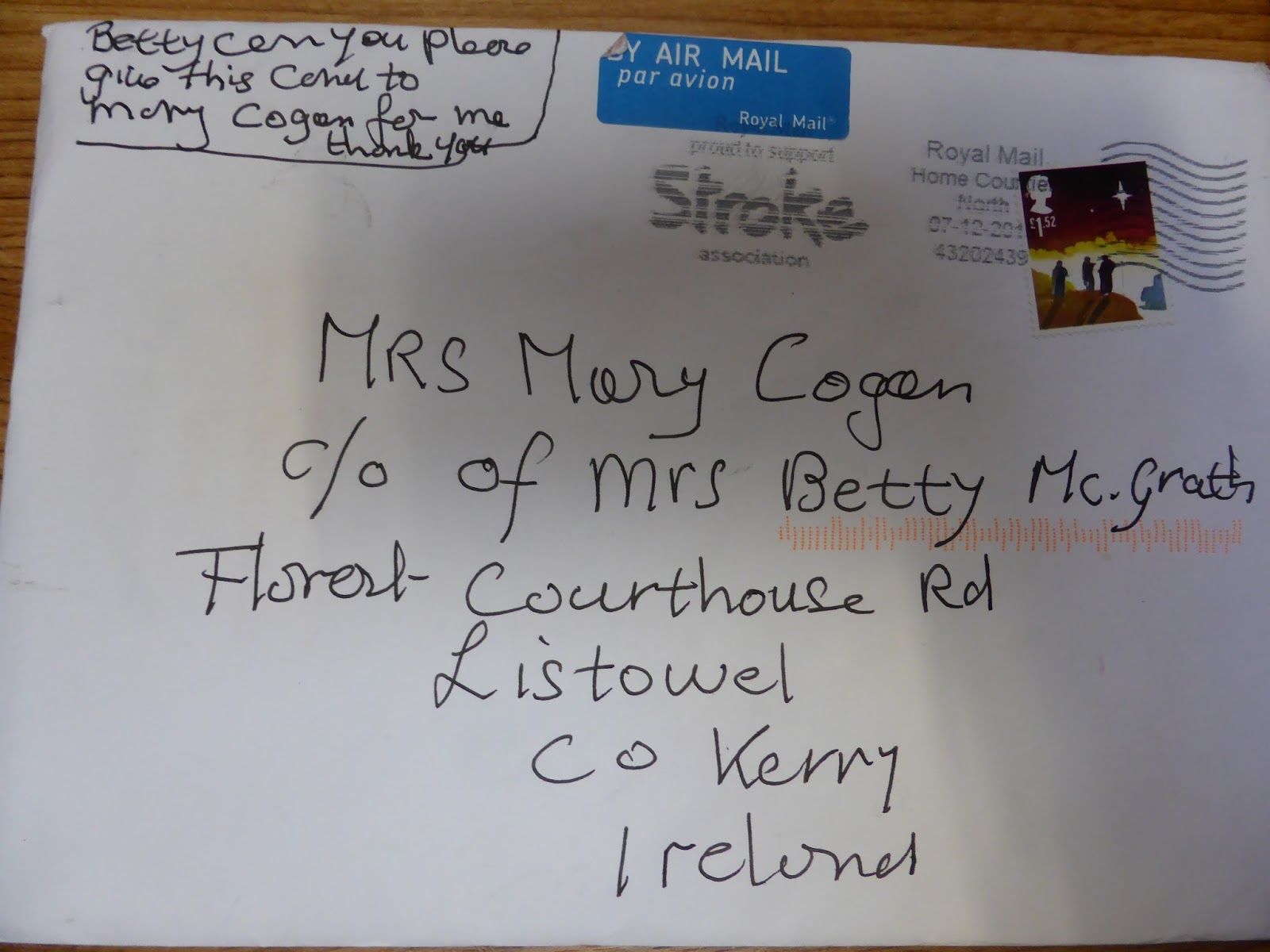 Wasn’t that so thoughtful of her? 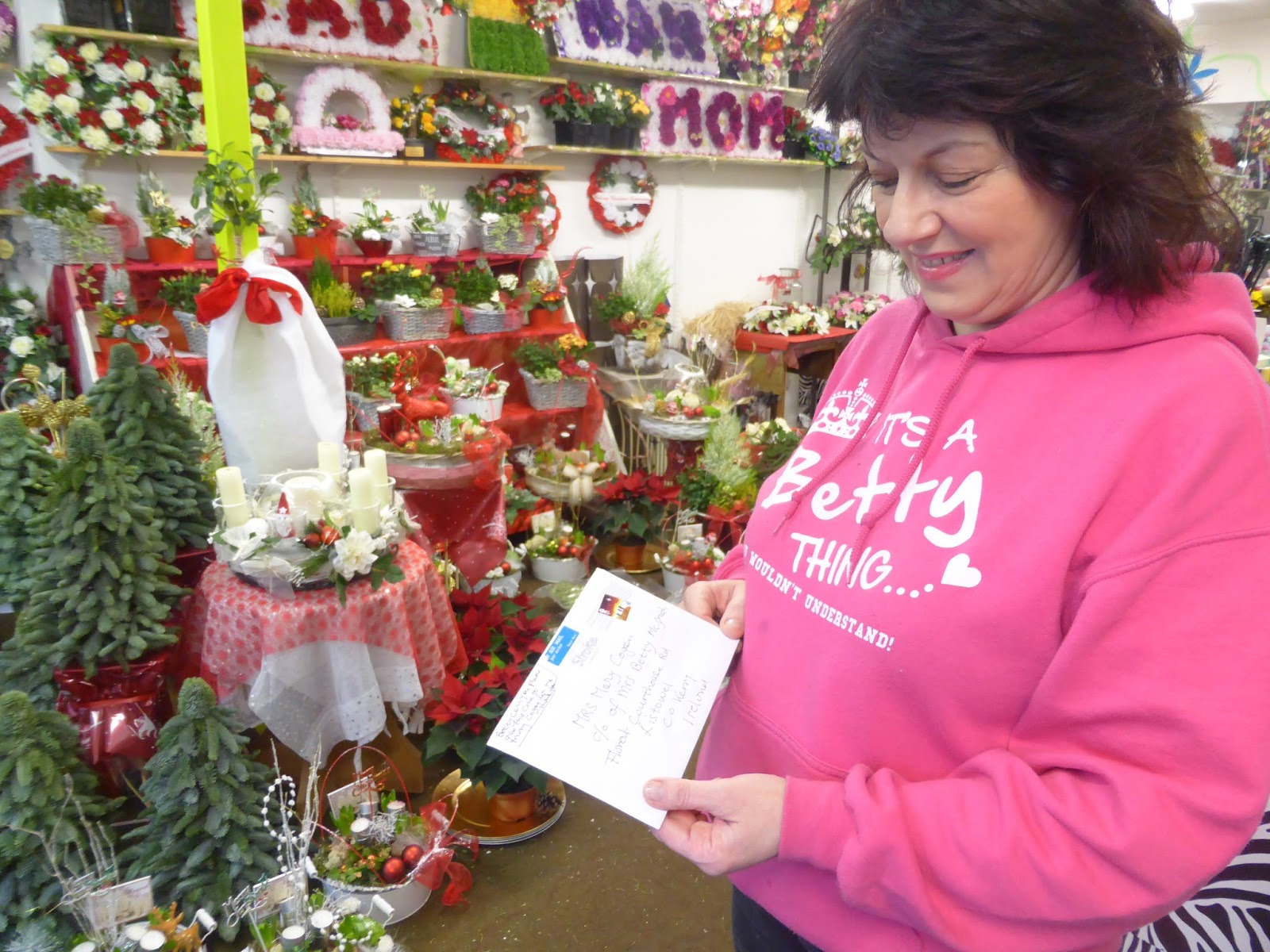 Betty passed the card to me but she wasn’t too good at explaining to me who this lovely lady was. On the day I collected the card from Betty, I met my good friend, Dolores O’Connor, in The Flying Saucer. 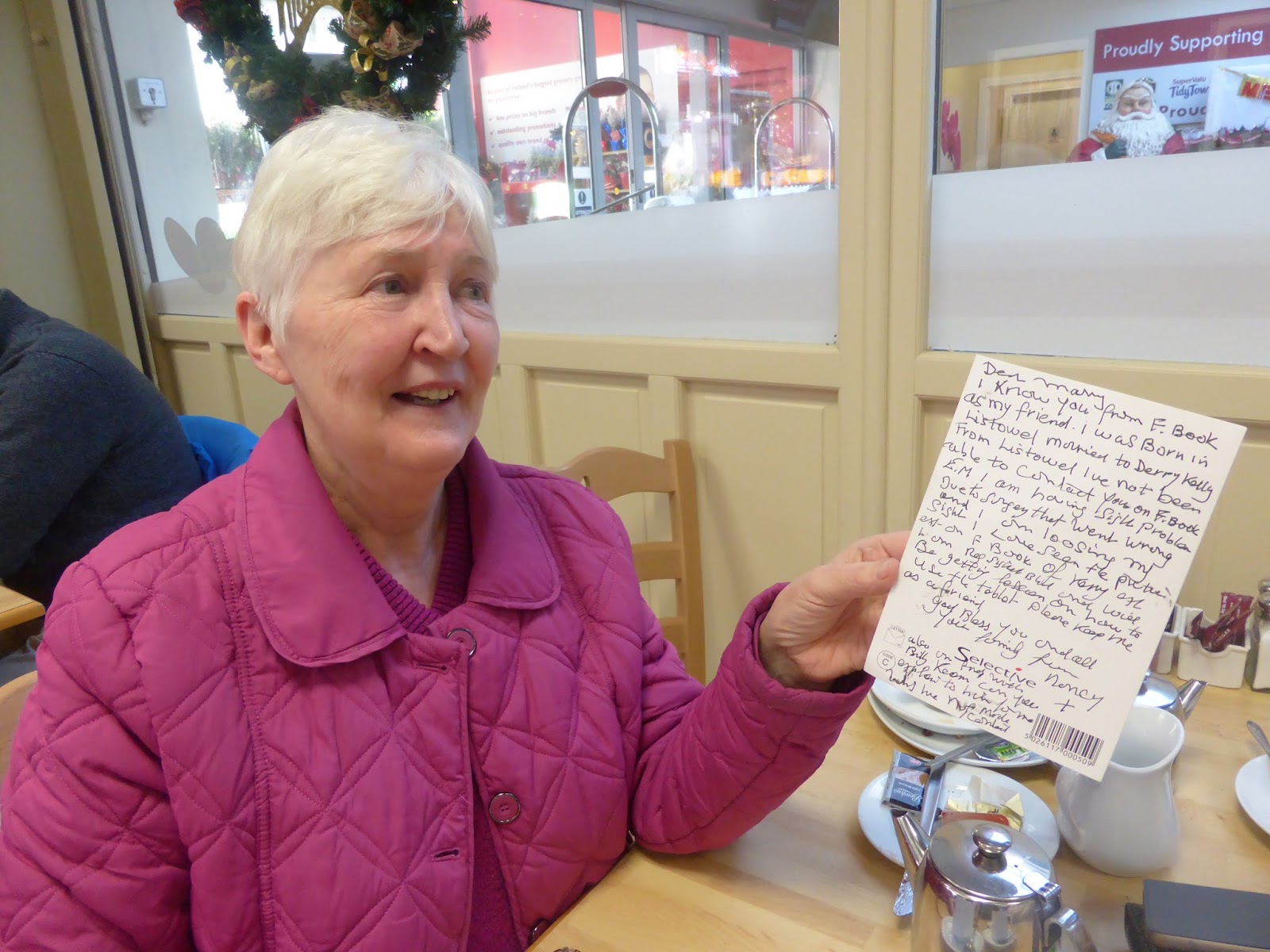 I showed Dolores my lovely card, told her the story and I asked her if she knew Nancy.

I think what happened next is called synchronicity.

Would you believe this; Dolores now lives in the house where Nancy once lived.

Since getting the card, I have mentioned Nancy to several Listowel friends. Nancy’s family, the Murphys is remembered well by Listowel people. 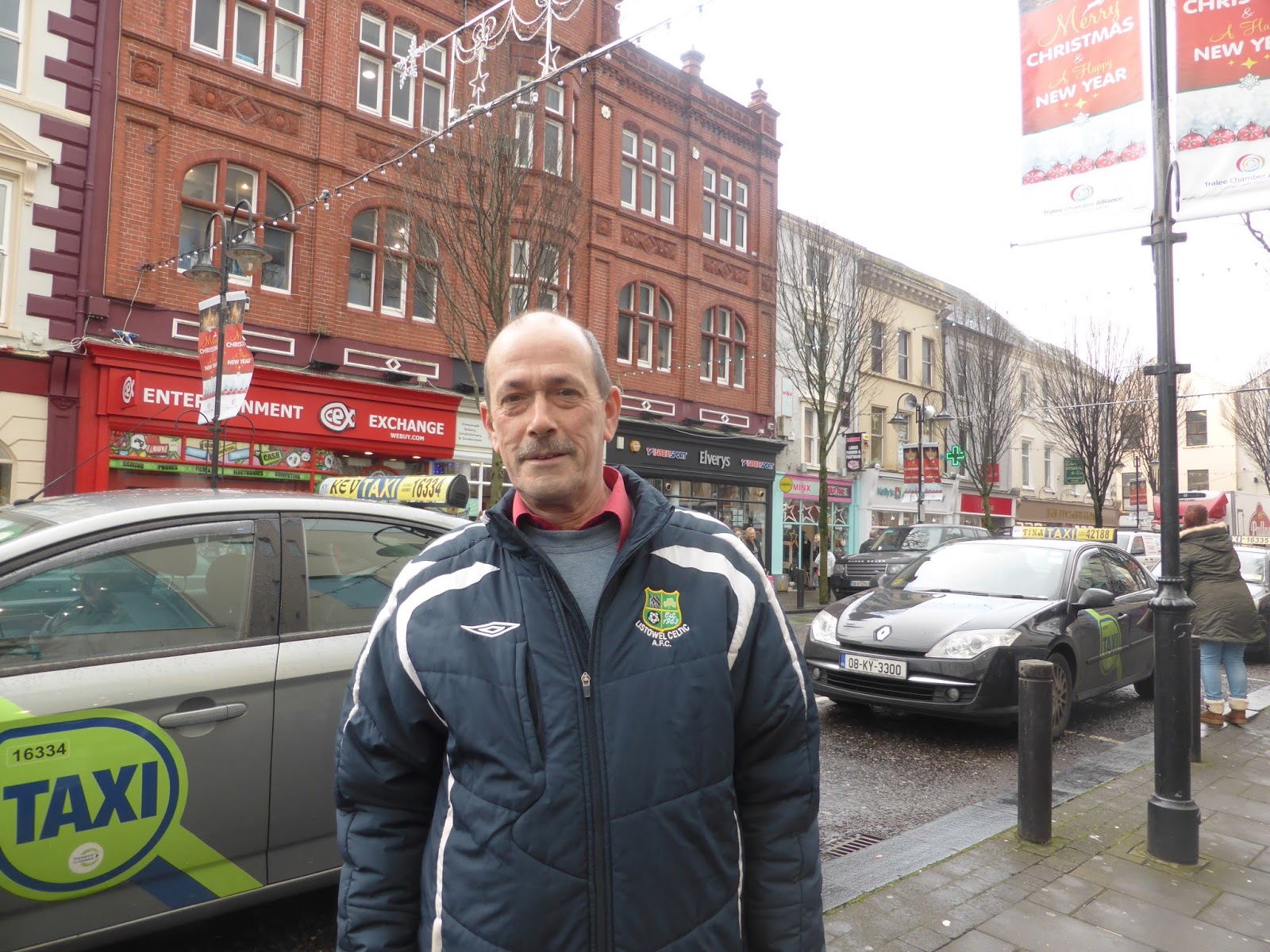 I met Martin Griffin in Tralee.  He is a real life as well as a digital friend of Nancy’s. He too got a Christmas card which set a challenge for the postal service. 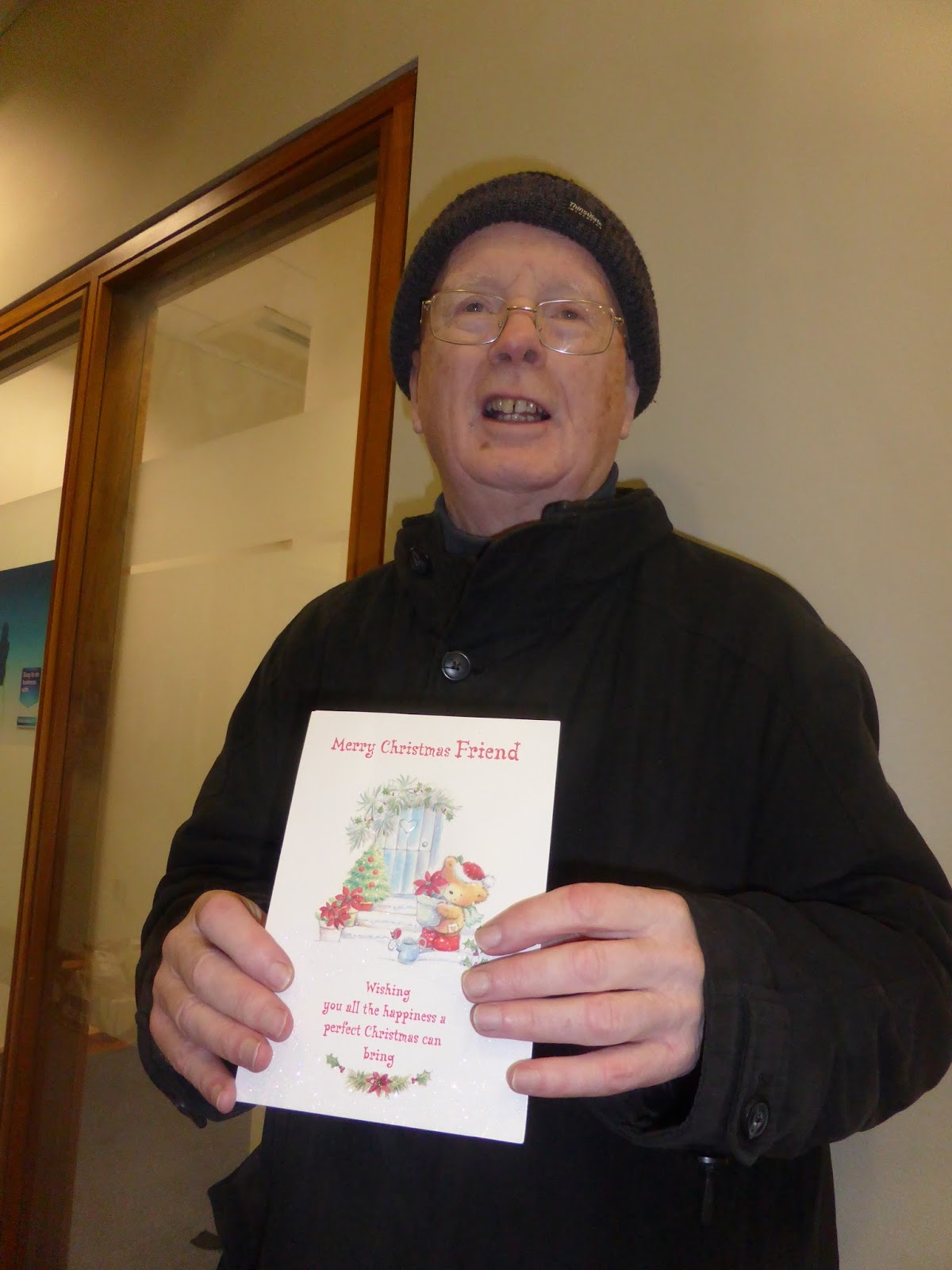 Junior remembers Nancy well and he asked me to convey his best wishes to her.

Nancy’s card forged an uplifting warm Listowel connection for us all.

So, in case you were thinking of cutting back on the cards, don’t. A card can mean a lot.

Some of the manyListowel Cards available locally 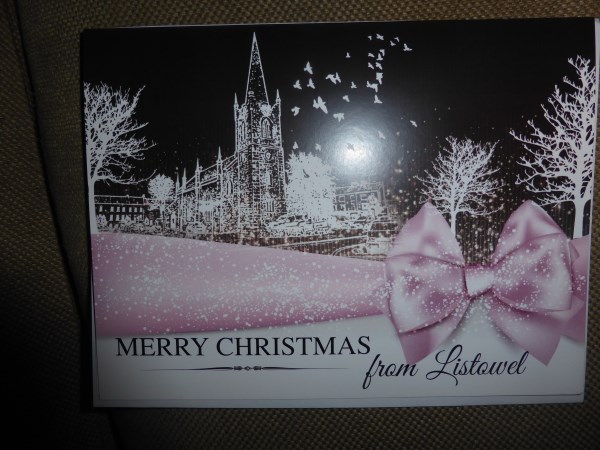 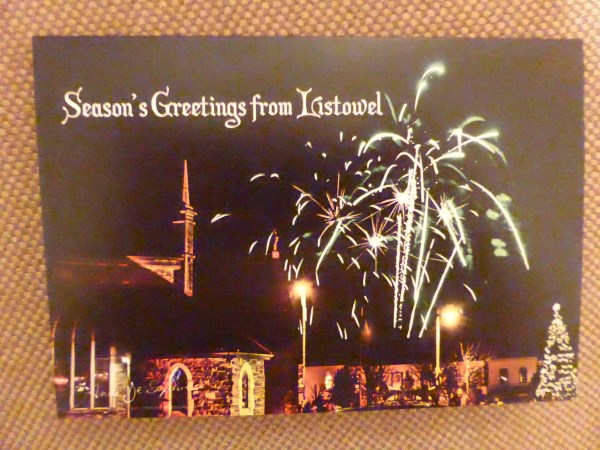 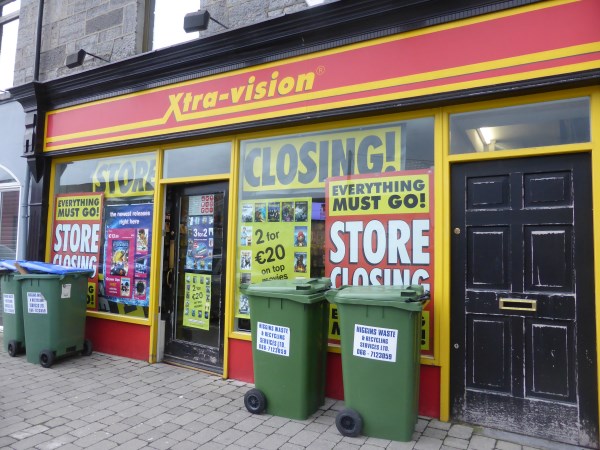 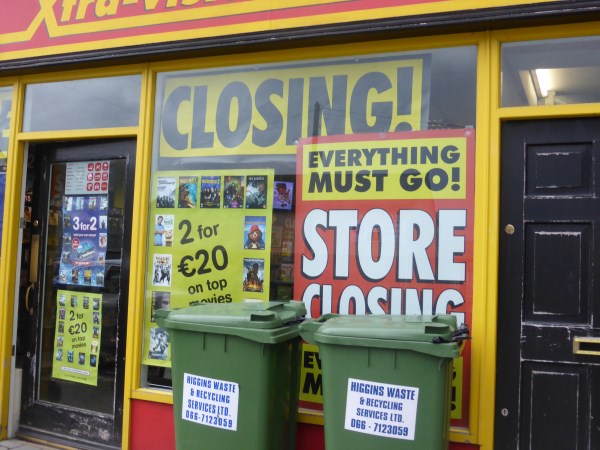 With the advent of Netflix, Pandora etc. business has dried up for DVD rental shops. Xtra Vision on Market St. is closing down.

One Down, Two to Go 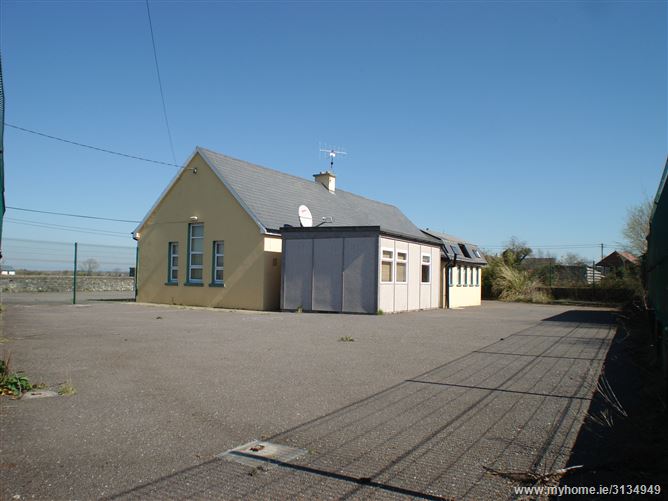 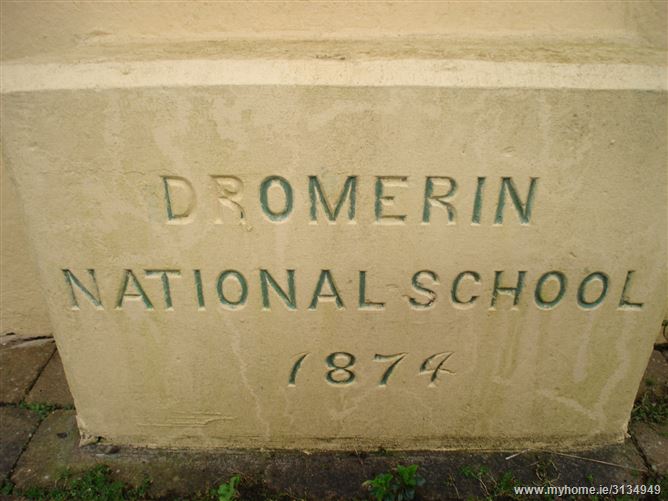 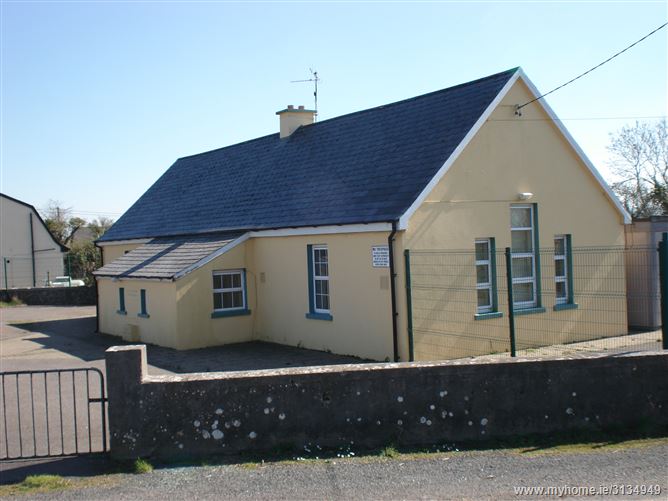 The old schoolhouse in Dromerin has been sold.

The below two are on the market 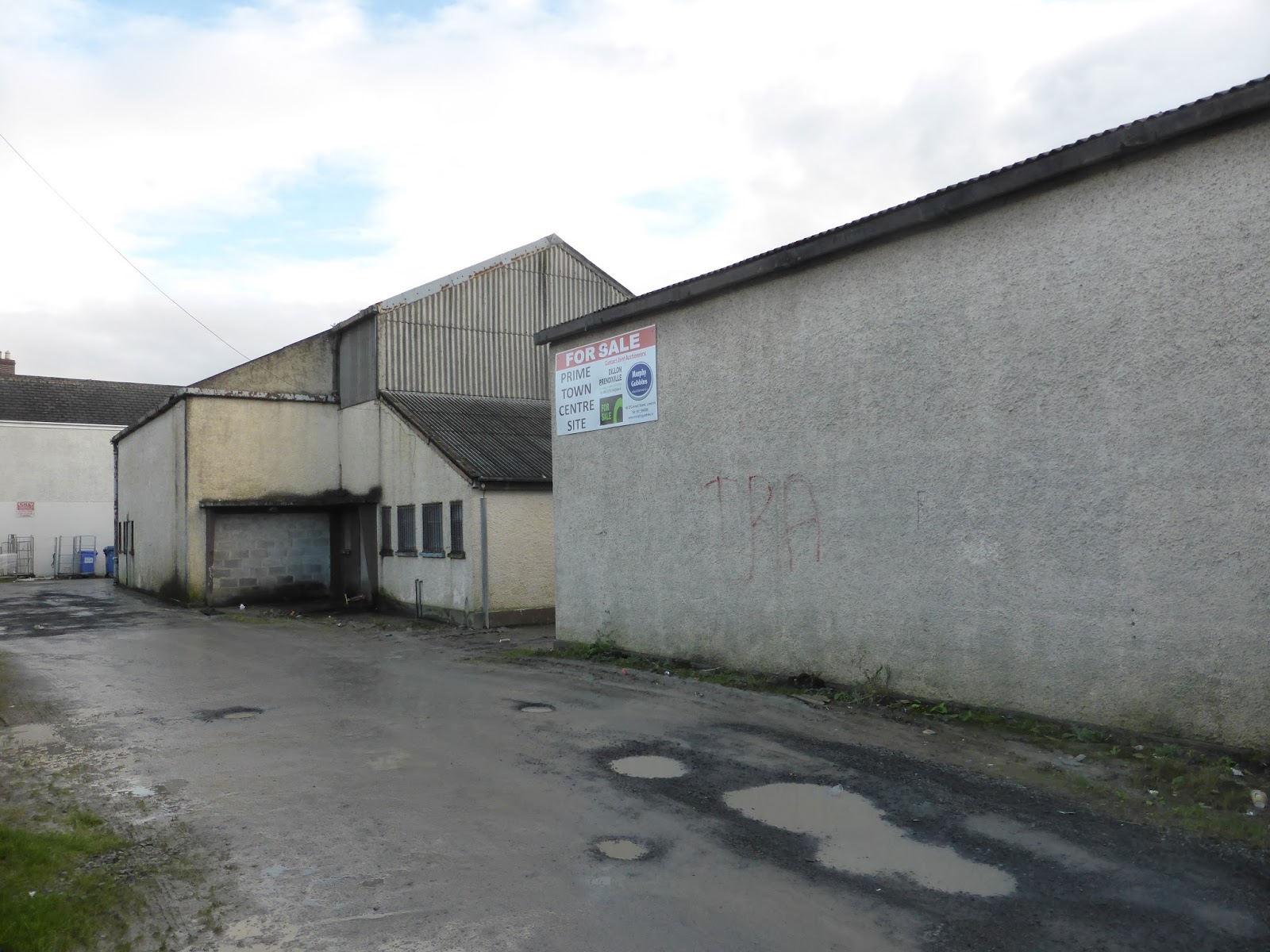 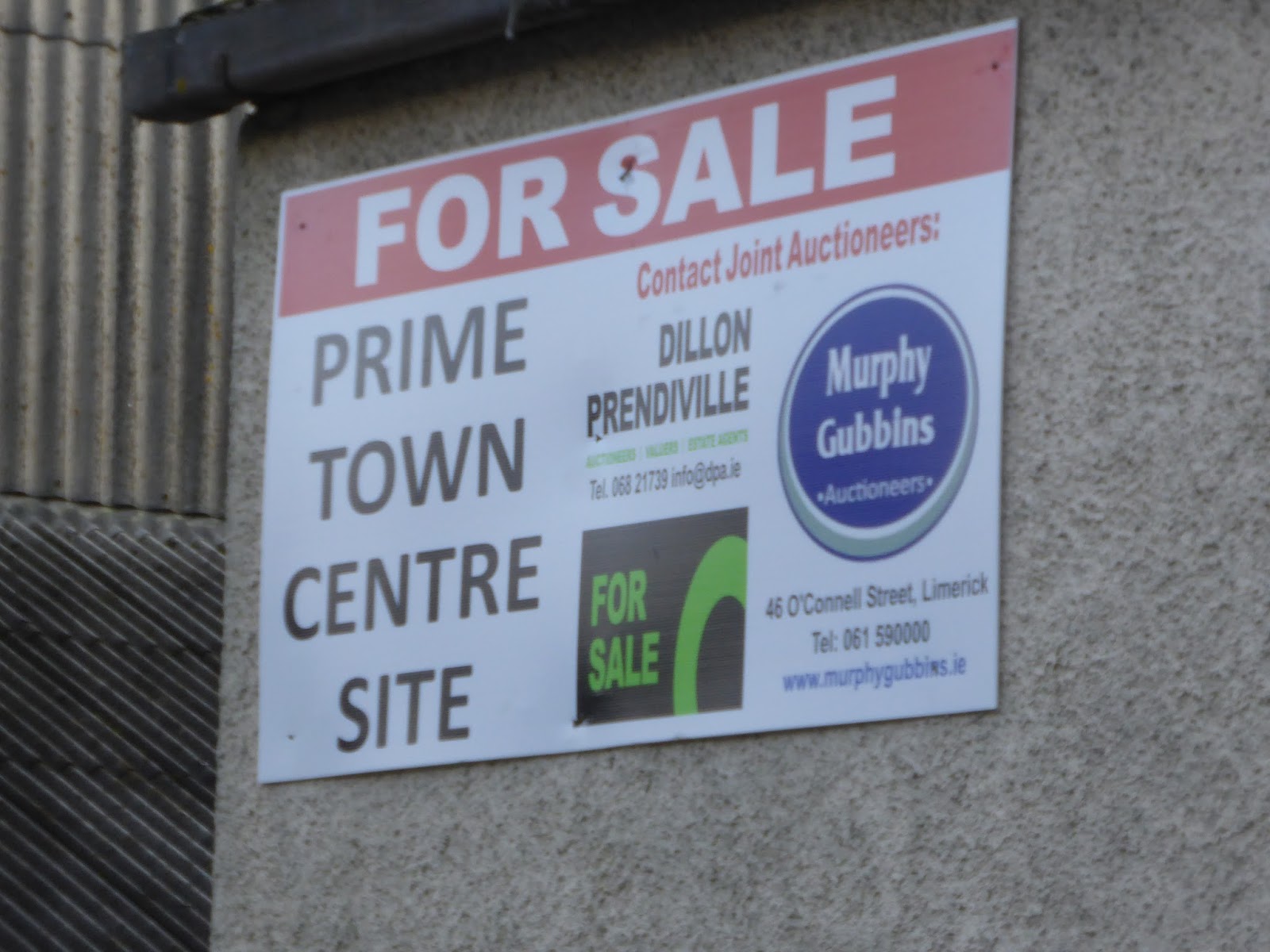 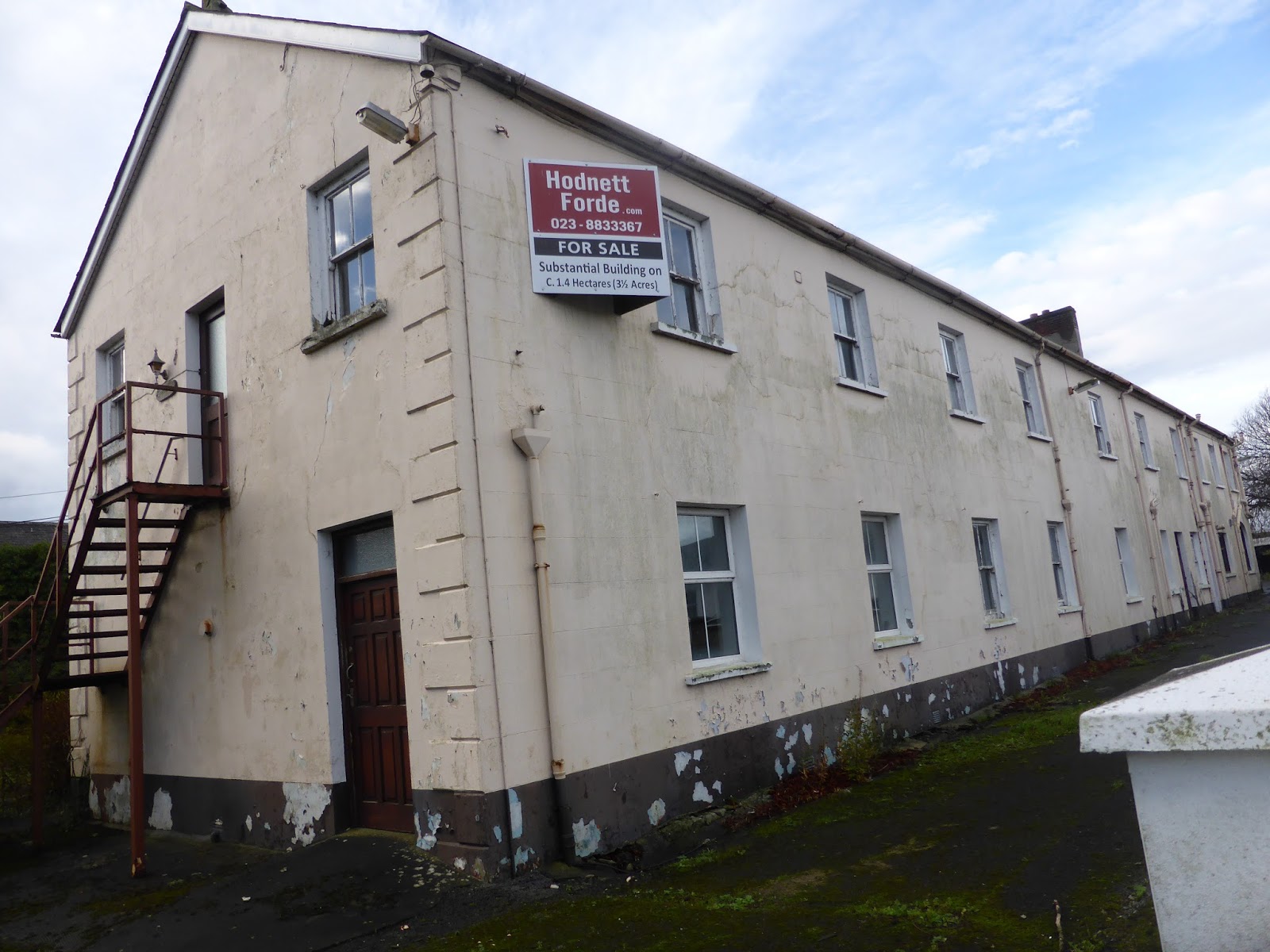 In Bank of Ireland

The bank ran a Christmas card competition for primary school pupils. The winners are displayed in the bank 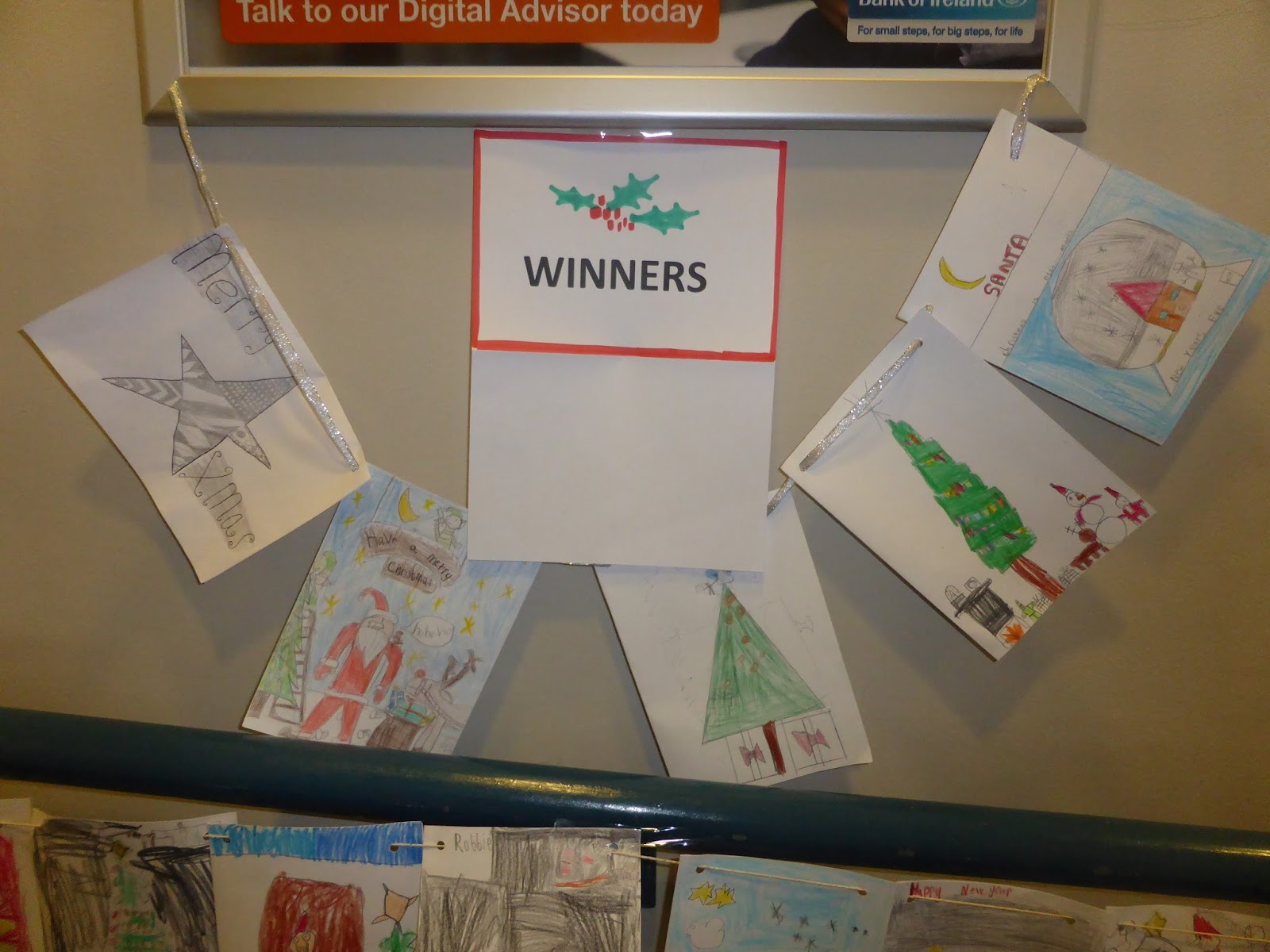 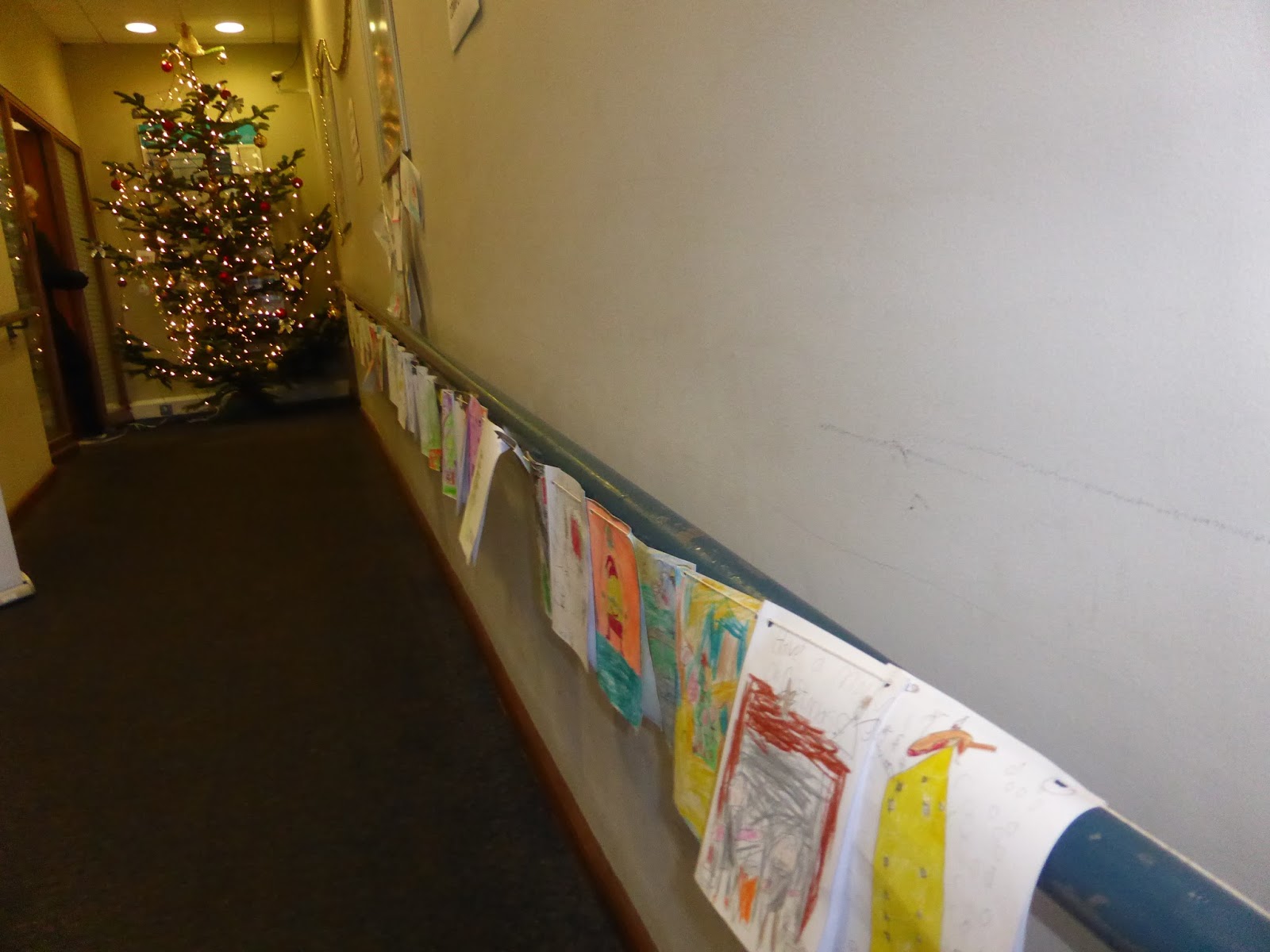 New Kid on the Block on Charles Street 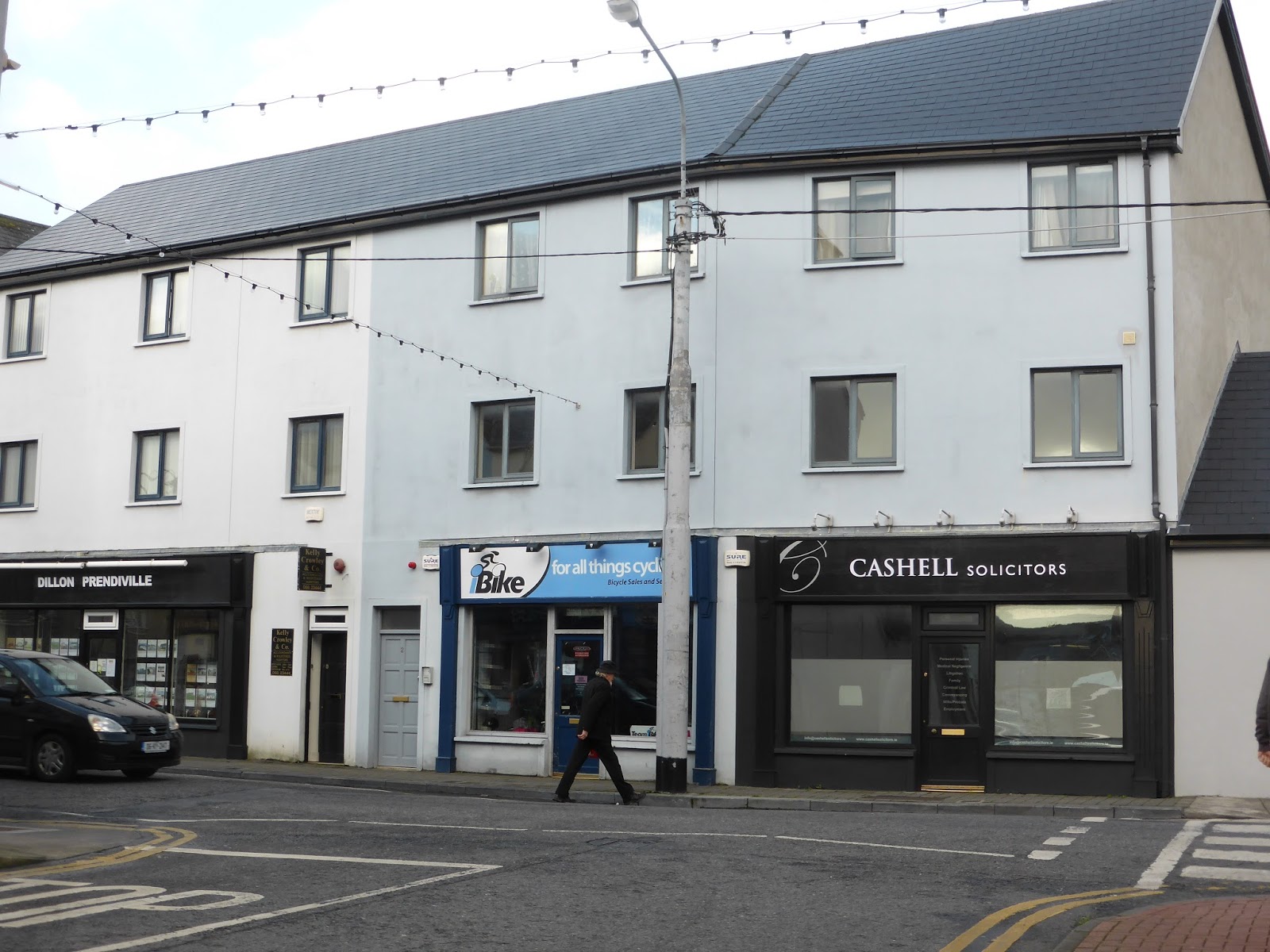 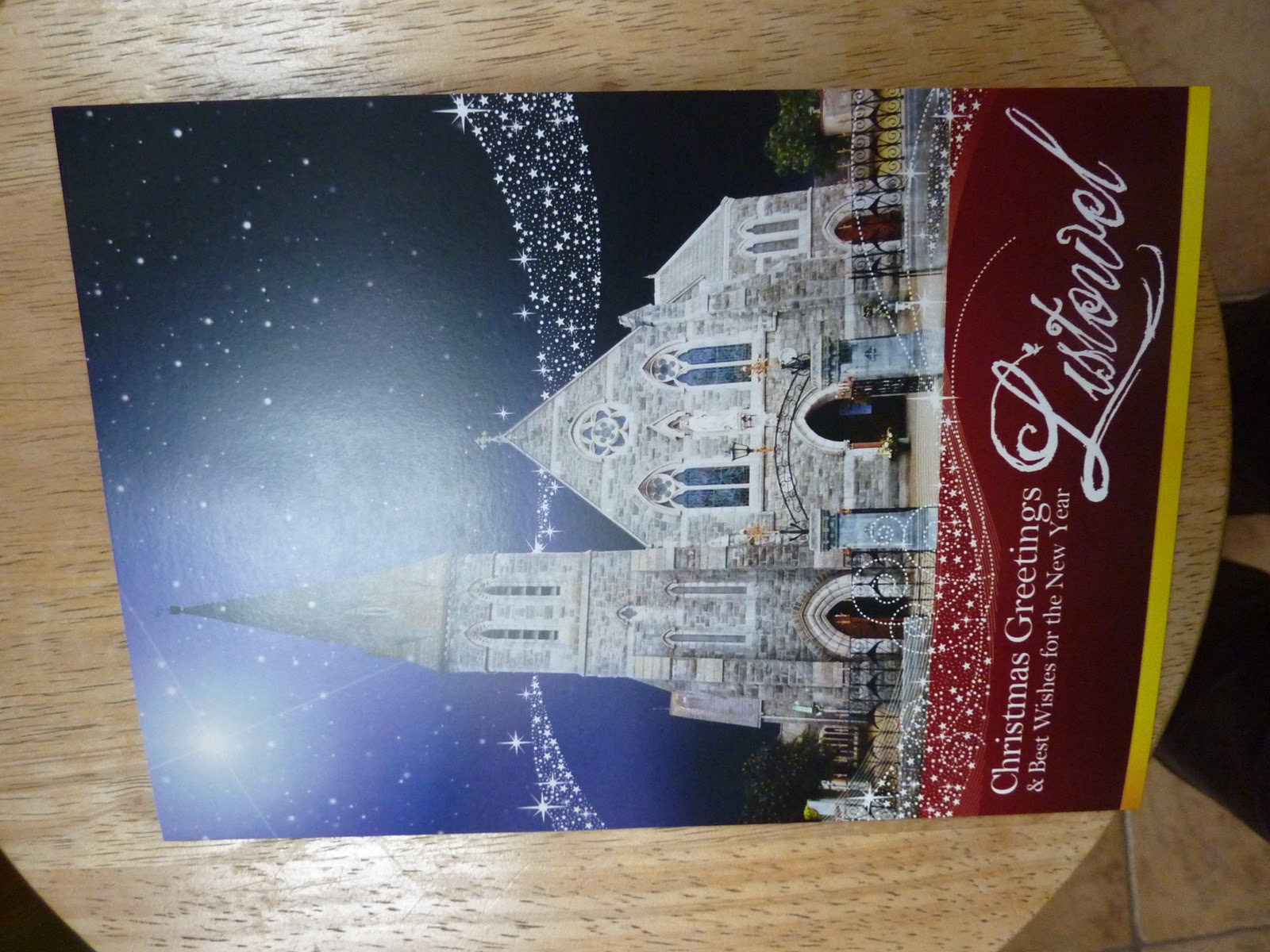 My people, I’m having a mare of a morning. I usually do photo things on my desktop. It’s old  but has a few really useful programmes on it, including all the software for my camera. One of the useful programmes is a one click resizer for web photos. This trusty pc has encountered problems lately and now the monitor won’t work, so I put the sd card from my camera into my lovely new shiny Mac and this  is what you get, a photo I waited all day to upload because it is too big and now I can’t find a way of rotating. So lads, you’ll just have to turn your head to the side or your laptop sideways to see the beautiful Christmas card featuring St. Mary’s, Listowel.  There is only one little elf in the parish office to do all the folding and packing so  don’t all rush down together to get them.

On the back of the card is a potted history of the church…very interesting.

There was a temporary church on the site of the present church in 1815.

The body of the present building was built in 1820.

More refurbrishment in 1910 and several times since.