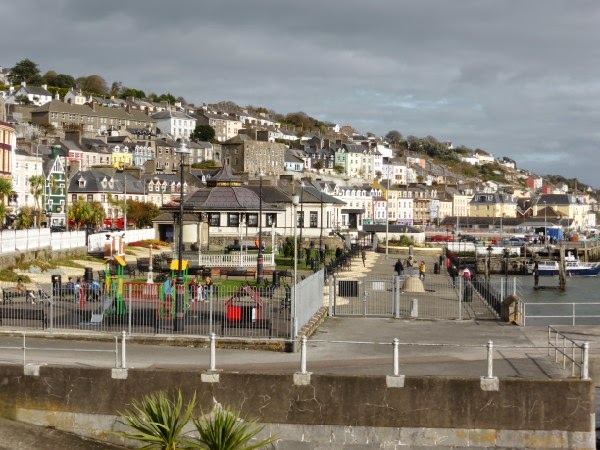 This is Cobh, Co. Cork and I visited there recently to see an art exhibition by Rory Tangney, who is my nephew in law.

The art exhibition is called 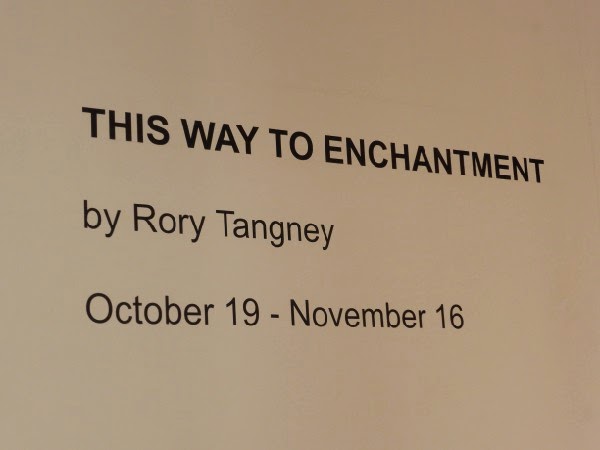 My photographs do not do justice to Rory’s work, but I’m trying to give you a flavour of the pieces. It’s all about sound and wood and things new and old, technology and progress. There is also a sound track to listen to and its all housed in a beautiful pace in the Sirius Arts Centre in Cobh.

Here is what the people who know say about it all;

Dublin based Cork artist Rory Tangney combines found and new materials with sound in a body of work that poses the question – can science provide us with what we need in a post-religious world? Ideas about obsolescence; of technology, people and ideas, emerge through sculptural objects, sound and drawings that are carefully imagined and skillfully made.

This Way To Enchantment, is essentially a search for spirit within the machine. Through works which engage with technology, old and new, relying on conventional, modern materials as well as salvaged materials that would normally be found in other contexts.

Tangney’s history as a furniture maker informs his sculpture, sound and drawing works relying on a process of making to create aesthetically potent and formal works. He focuses on the idea that manual skills provide a rootedness in the physical world, as if to say we are still physical beings walking on solid ground.

One of his large sculptures Consensus, is composed of a forest of salvaged reel-to-reel audiotape of random radio recordings from the past 40 years. The salvaged tape, before being cut up for the sculpture work, was harvested for its audio content. Some of these sounds, along with manual tape effects, re-emerge in the sound work, which also uses field recordings and extracts from YouTube clips.

Recordings taken in a hospital MRI booth provide an explosive background to the second work When All Is Said And Done. Here, the voice of Peter Higgs, the scientist who proposed the existence of the God Particle, recounts his life’s work along with an unidentified piece of music taken from one of the old tapes. 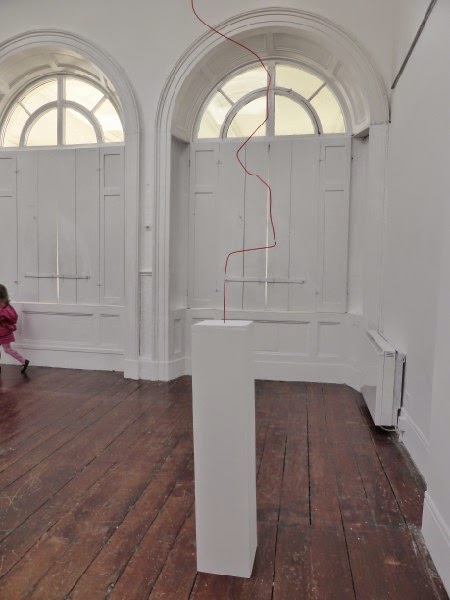 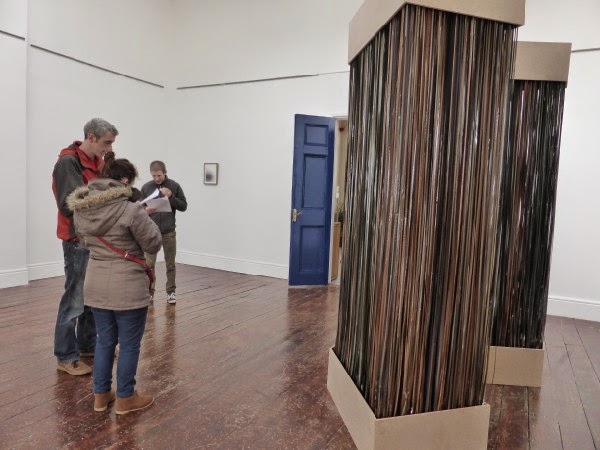 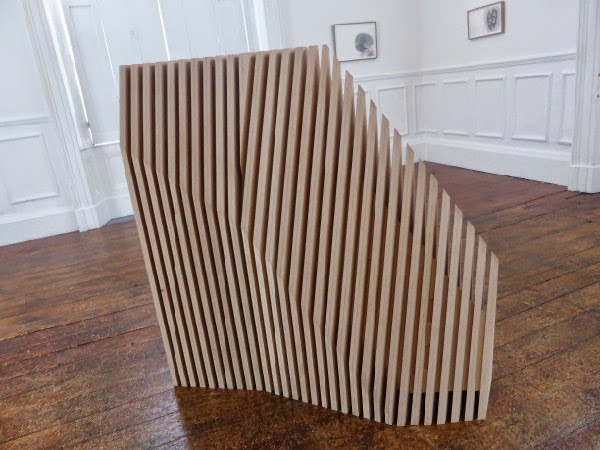 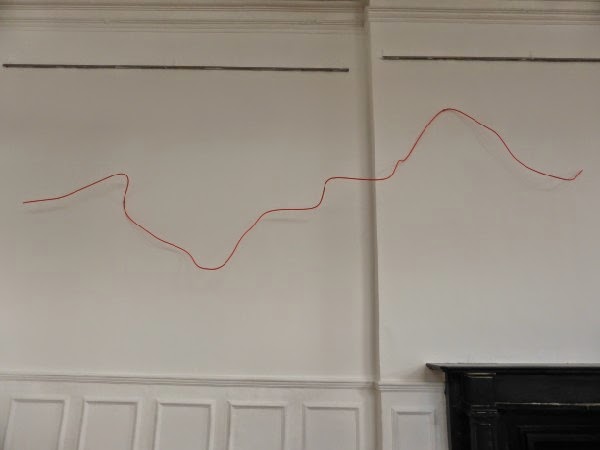 While I was in town I did a bit of exploring and I found Cobh fascinating. I’d recommend a visit. 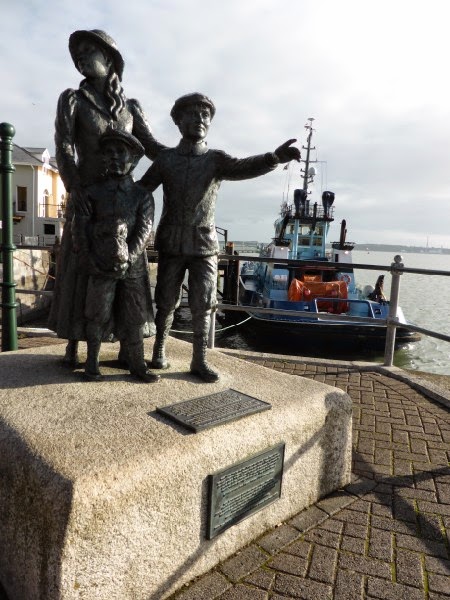 This is The Emigration memorial. Cobh or Queenstown as it was formerly known was the point of departure for Irish emigrants to the U.S. 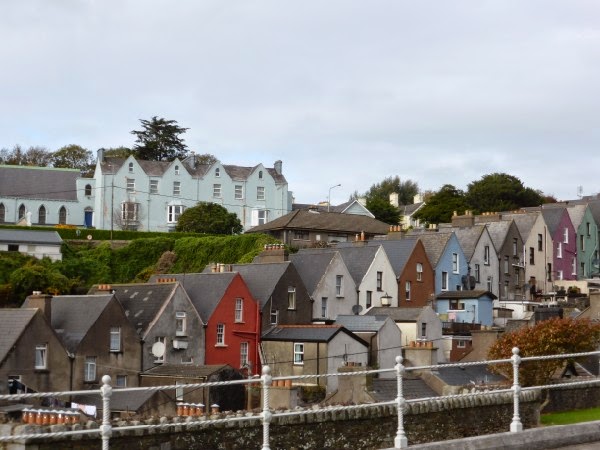 Pretty houses with convent in the background 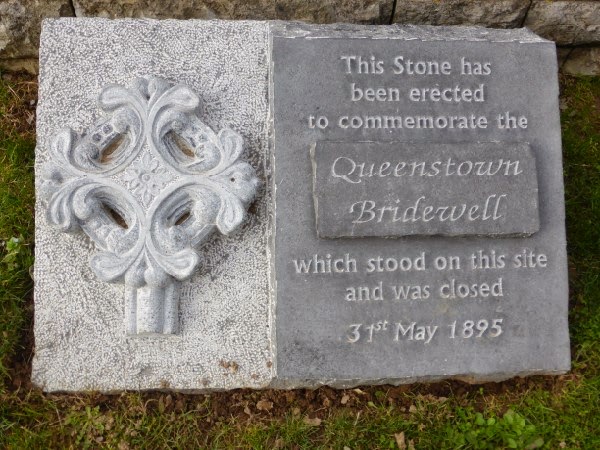 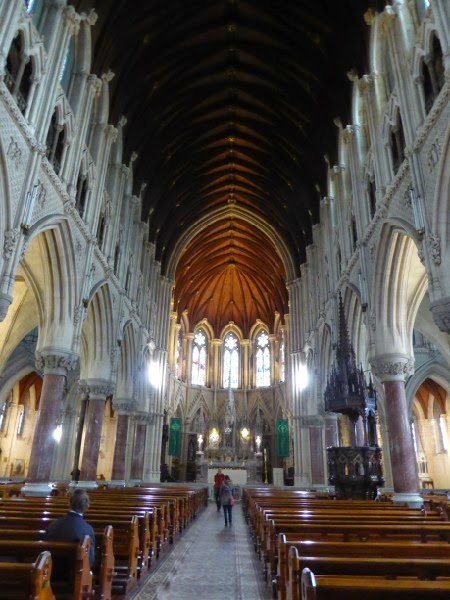 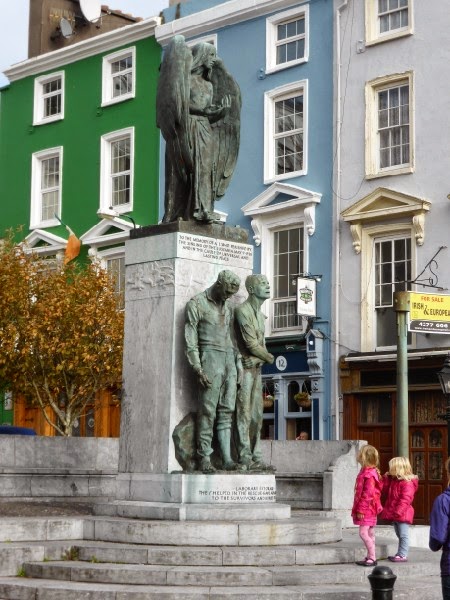 Below is the Wikipaedia account of the sinking of the Lusitania

On 7 May 1915 Lusitania was nearing the end of her eastbound crossing from New York, as she was scheduled to dock at the Prince’s Landing Stage in Liverpool later that afternoon. She was running parallel to the south coast of Ireland, and was roughly 11 miles off the Old Head of Kinsale when the liner crossed in front of U-20 at 14:10. It was sheer chance that the liner became such a convenient target, since U-20 could hardly have caught the fast vessel otherwise. Schwieger, the commanding officer of the U-boat, gave the order to fire one torpedo, which struckLusitania on the starboard bow, just beneath the wheelhouse. Moments later, a second explosion erupted from within Lusitania’s hull where the torpedo had struck, and the ship began to founder in a much more rapid procession, with a prominent list to starboard.[54][55]

Almost immediately, the crew scrambled to launch the lifeboats but the conditions of the sinking made their usage extremely difficult, and in some cases impossible due to the ship’s severe list. In all, only six out of 48 lifeboats were launched successfully, with several more overturning, splintering to pieces and breaking apart. Eighteen minutes after the torpedo struck, the bow struck the seabed while the stern was still above the surface, and in a manner similar to the sinking of Titanic three years earlier, the stern rose into the air and slid beneath the waves.

Of the 1,959 passengers and crew aboard Lusitania at the time of the sinking, 1,195 lost their lives that afternoon in the waters of the Celtic Sea. Just as had been seen with Titanic, most of the casualties were from drowning or from hypothermia. In the hours after the sinking, acts of heroism amongst both the survivors of the sinking and the Irish rescuers who had heard word ofLusitania’s distress signals brought the survivor count to 764, three of whom later died from injuries sustained during the sinking. By the following morning, news of the disaster had spread around the world. While most of those lost in the sinking were either British or Canadians, the loss of 128 Americans in the disaster, including American writer and publisher Elbert Hubbard, outraged many in the United States. 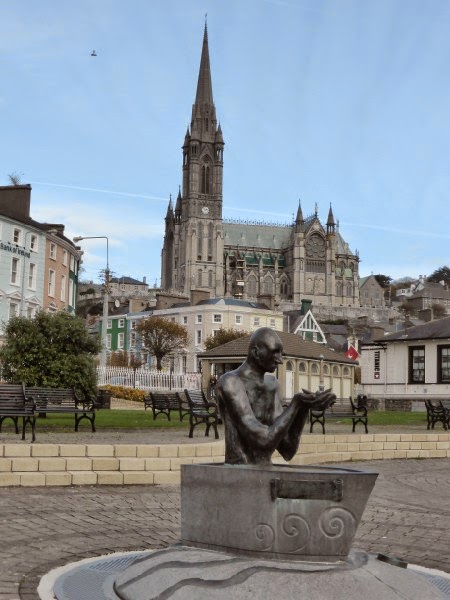 I took this photo from the lovely park beside the children’s playground. 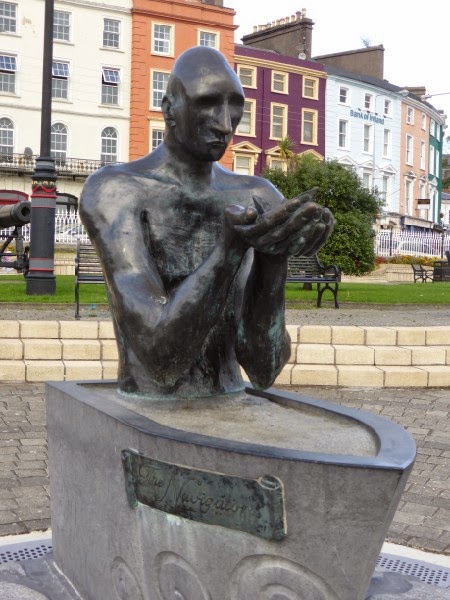 This piece is called The Navigator. It looks to me like a very big man in a very small boat. 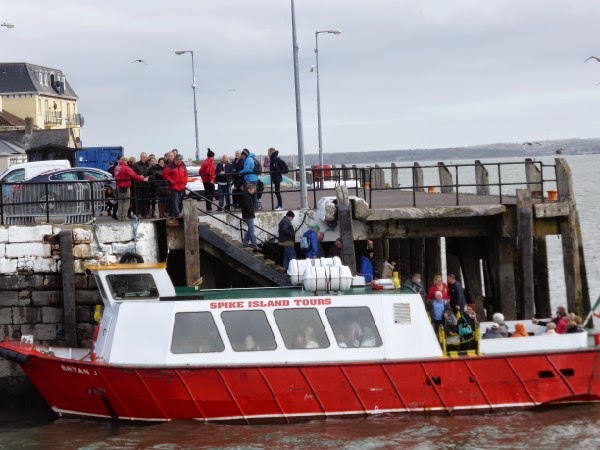 People were embarking to take a trip to Spike Island. 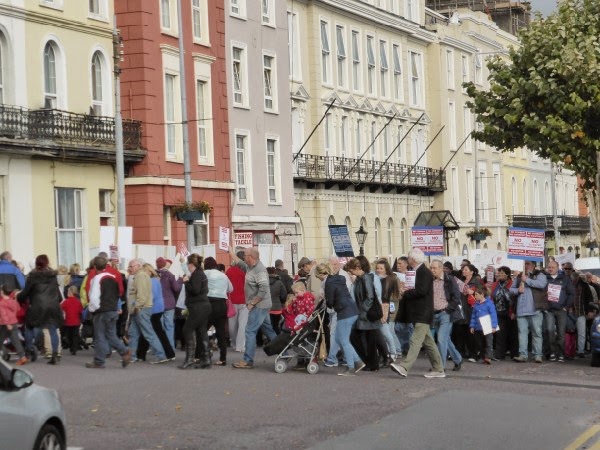 A big protest march against the government’s proposed water charges was taking place. 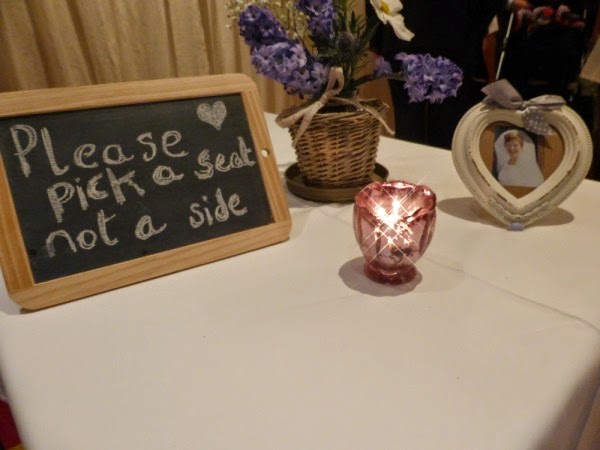 What a lovely sentiment! 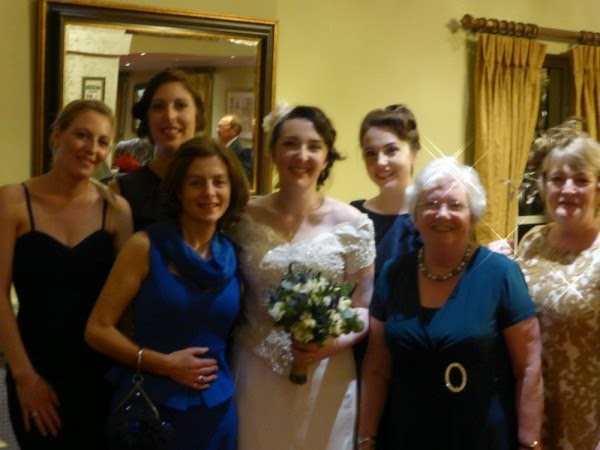 All of these ladies have a Pres. Listowel connection: 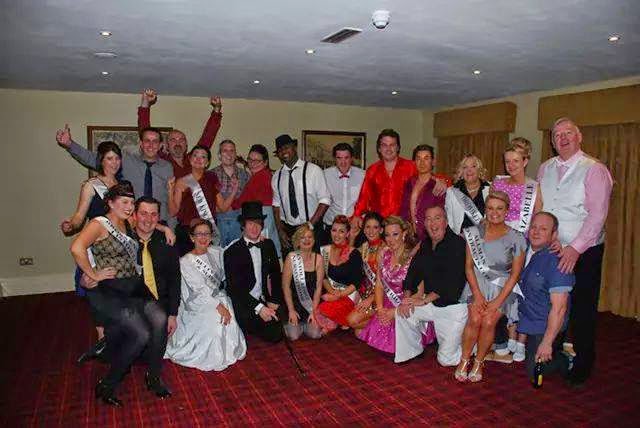 A huge bualadh bos is due to the brave people who gave up weeks of their time and all of their inhibitions and tripped the light fantastic for Kerry Parents and Friends association.

By all accounts we missed  great night. I can’t wait for the DVD which will be available shortly. Great Christmas present….great cause.

There is a taster on Changes page