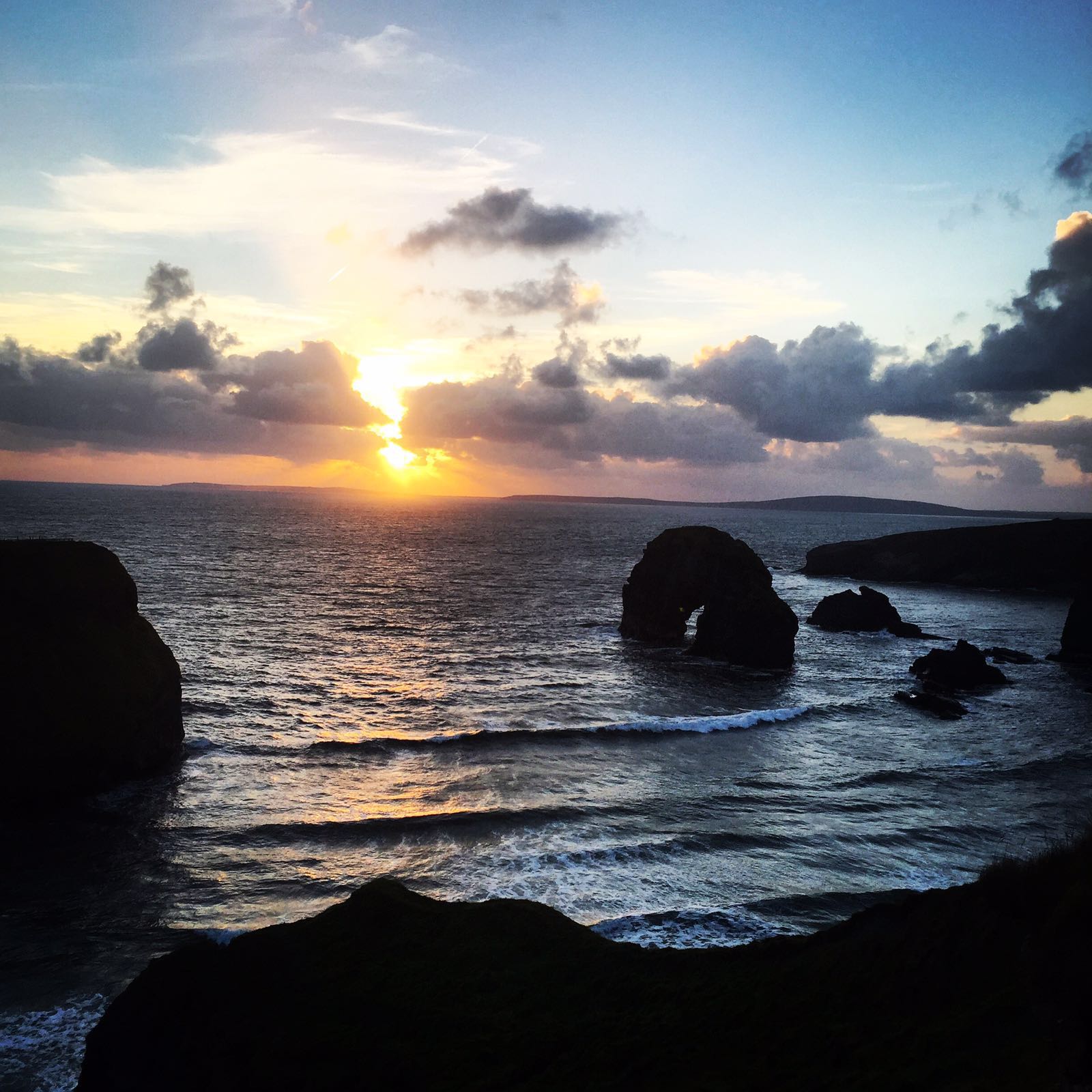 A Wife or a Goat

Do you remember this old photo from last week? 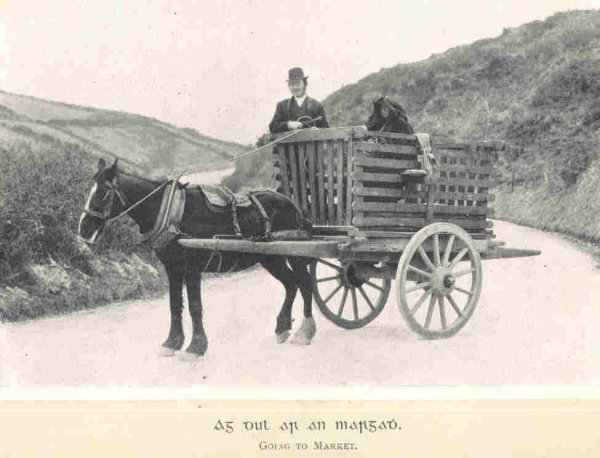 An eagle eyed blog follower thought the cargo did not really look like a goat, so he did a bit of internet research. He found a colour version of the same postcard with the cargo identified not as livestock but as the farmer’s wife. 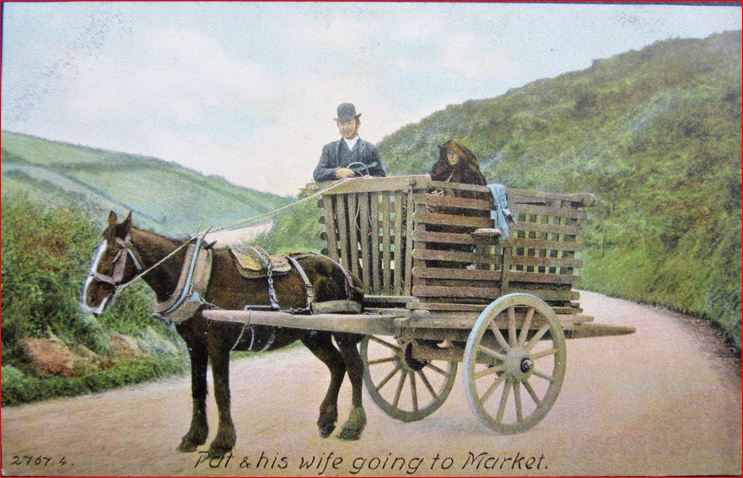 So Pat was in fact buying and not selling at all. He has his side rails on to transport home whatever farmyard animals he might purchase…quite likely pigs.

While he was researching this old postcard, Nicholas came across another interesting one. 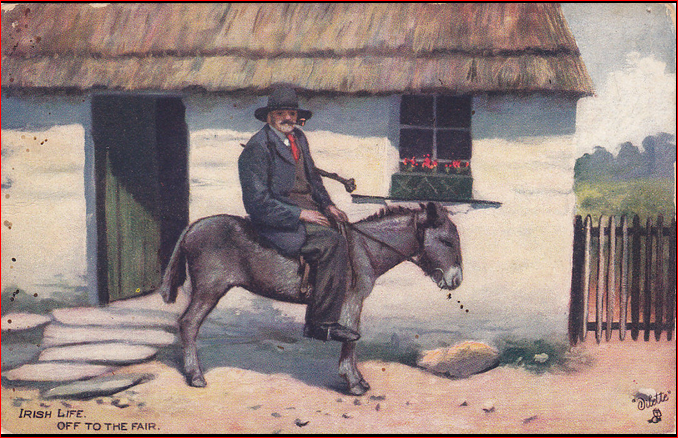 This is what he says of this one:

“I also attach a postcard of a single? man going to the fair, but I fear that he is  only interested in the faction fight- he has his ‘dúidín’ in his gob and his  ‘Cleith ailpín’ under his oxter, well-seasoned in the chimney and in skull-cracking form!

(I hope the fair wasn’t too far away as that poor donkey looks very small to be carrying that big man any distance.)

While I was ill I missed lots of happenings in Listowel. I never got to pay my respects to a man I greatly admired, Liam Healy, gentleman photographer who passed away in July. 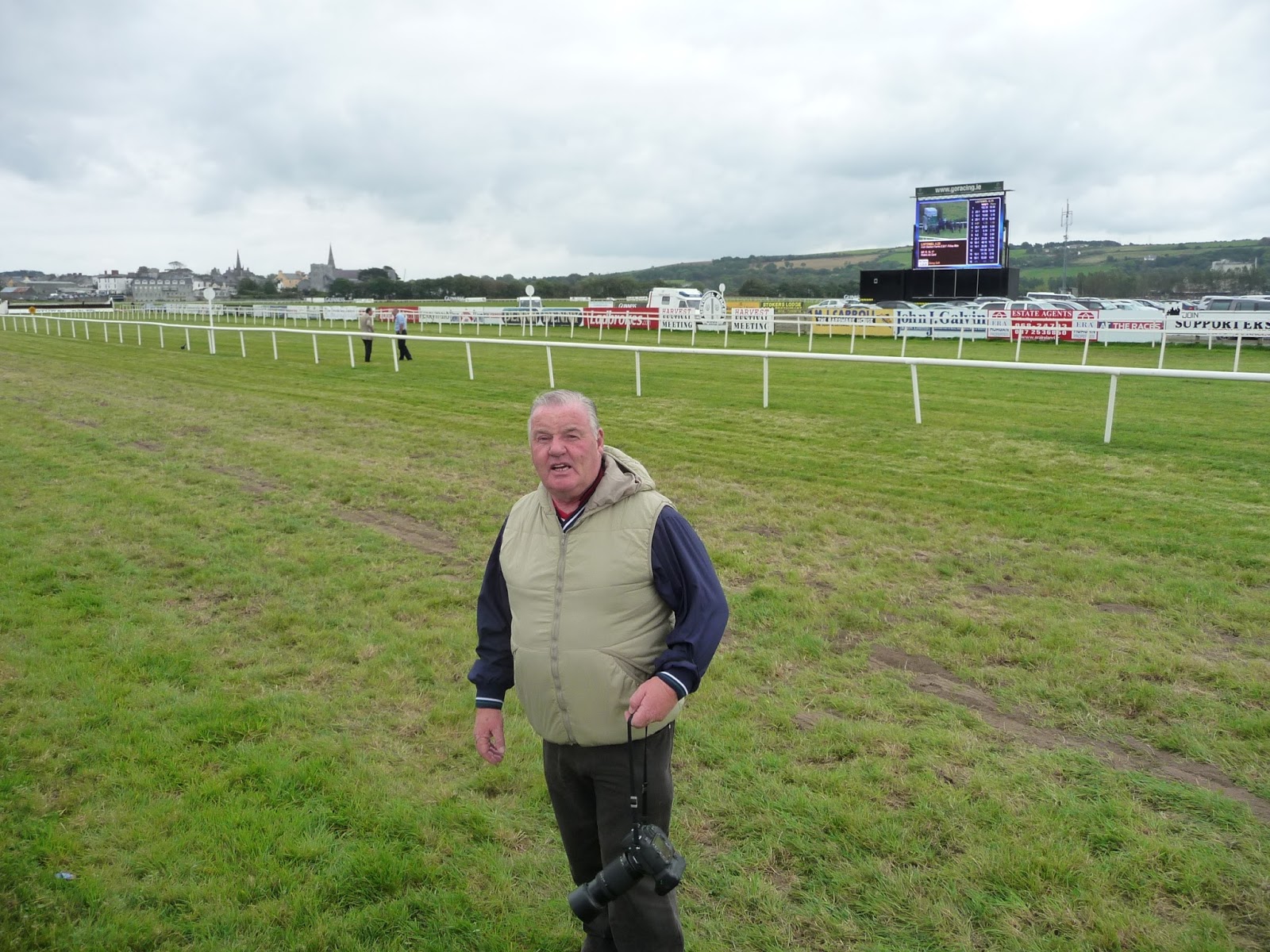 I took this photo of Liam in one of the places he loved best, The Island a.ka.a. Listowel Racecourse. Meeting Liam at the Races was always one of the highlights. Even though he was working, he always took time to chat to the punters on the wheelchair stand. 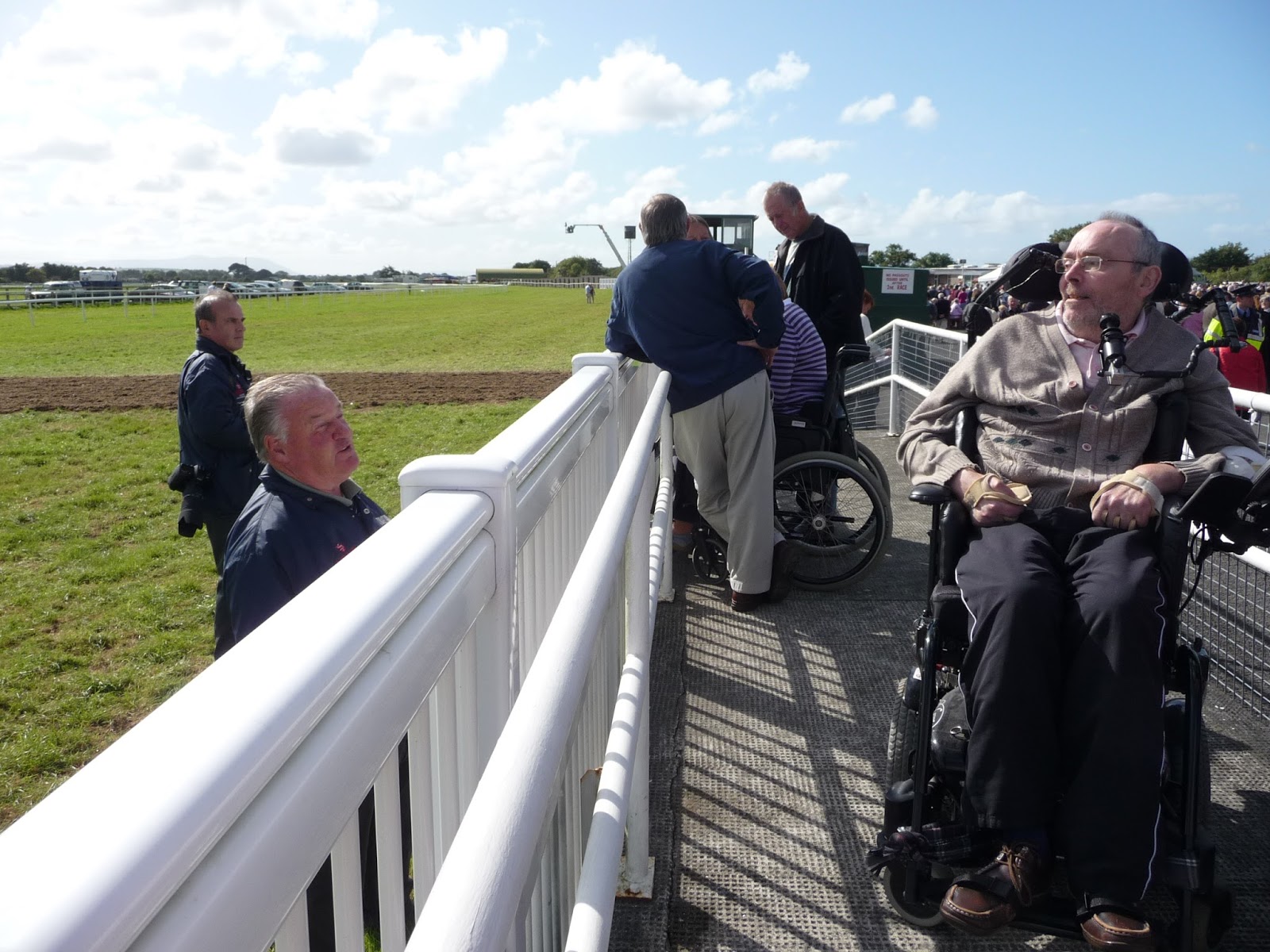 Here he is chatting to Jim Cogan and I can tell you one thing he is not doing. He is not giving him a tip. 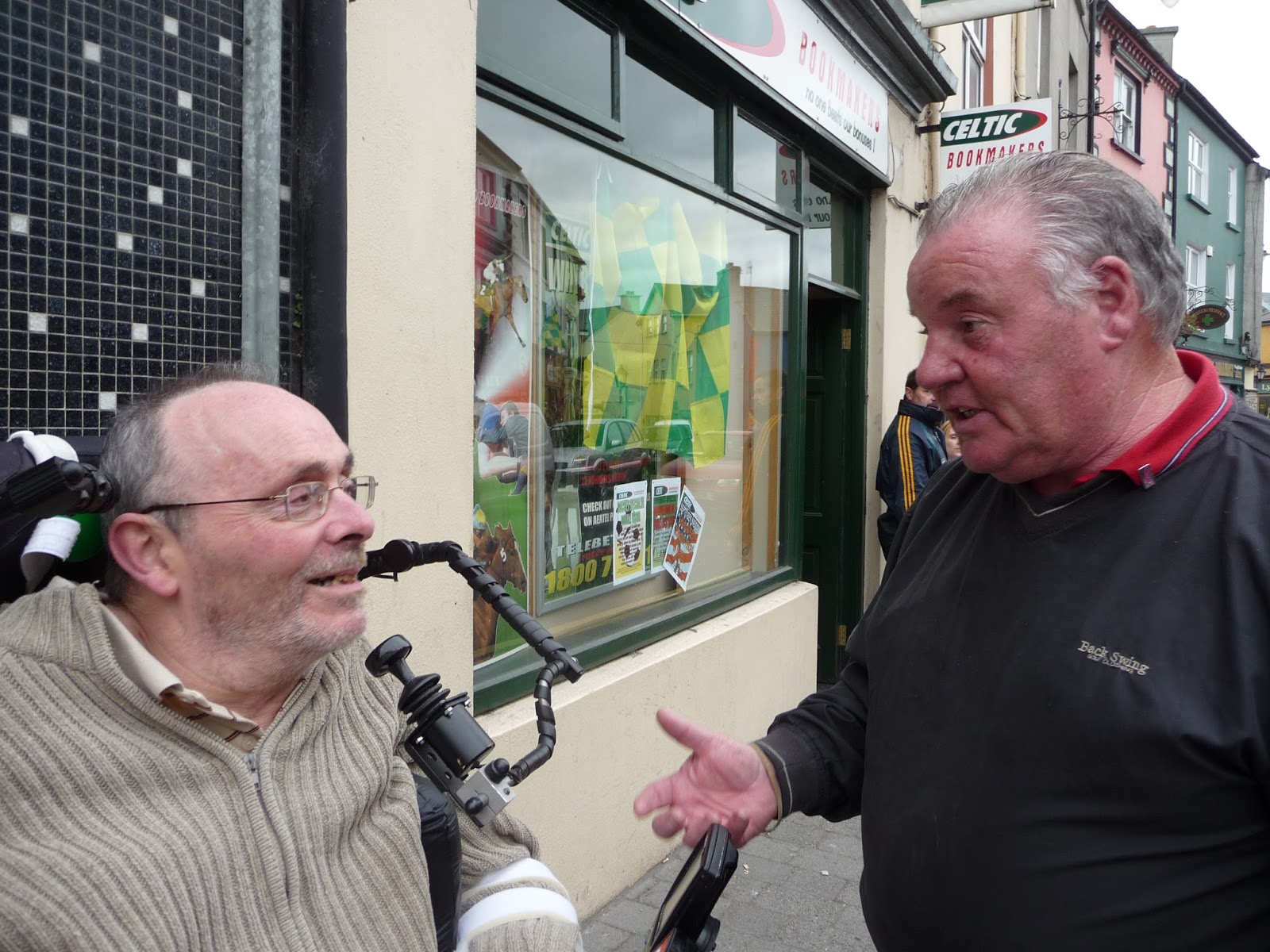 Jim loved to meet Liam on the street. He was always good for a chat. He always had something interesting to say. I would love to think that they have met up above and are having a good natter. 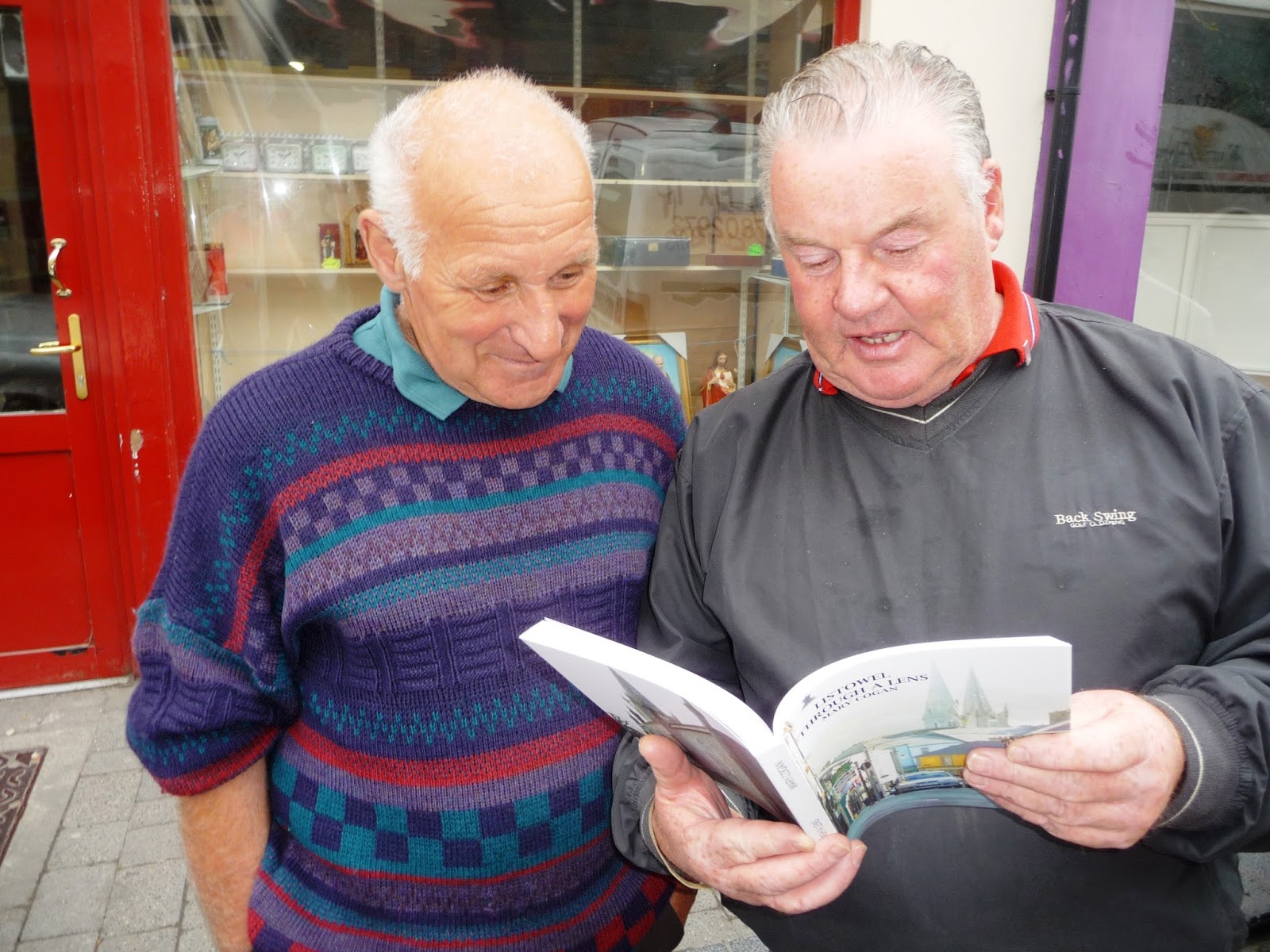 Here Liam and his friend, Pat Walsh are reading my book. Liam was supremely complimentary, ignoring all the photographical mistakes and poorly composed shots.

When Liam did something, he did it to the best of his ability. His first and greatest achievement is his family. He was immensely proud of all of them and he revelled in the joy of having them all around him. He looked after them well all his life and they took great care of him when care was needed.

Liam took the photographs but he always saw the person he was photographing. It wasn’t just a job to him. His subjects became his friends. When I saw photographs of Liam Junior shouldering the coffin of J.T. McNamara just a few short weeks after his own father’s funeral, I knew that Liam had passed on the qualities of compassion and loyalty to the next generation.

Liam Healy did nothing by halves. When he grew roses he grew every possible variety in his garden in Ballygologue. When he collected souvenir pens he had hundreds in his collection. He loved old things and I often met him in a charity shop. One day I told him that I was in search of a child’s abacus. I had this great idea that it would be useful as a row counter when I was knitting. I had searched a few shops without success. Two days later Liam arrived at my door with an abacus that he had picked up in some shop or other in Tralee. This kindly act, so typical of Liam, brought the words of Wordsworth to mind; “the best portion of a good man’s life, his little nameless unremembered acts of kindness and of love.”

Liam Healy was one of Listowel’s most successful business men. He founded a business empire that other less humble men would be boasting about to anyone who would listen. Liam carried his success lightly. I feel honoured to have known him and it is with pride I call him friend.

May the sod rest lightly on his gentle soul.

In Listowel’s Garden of Europe 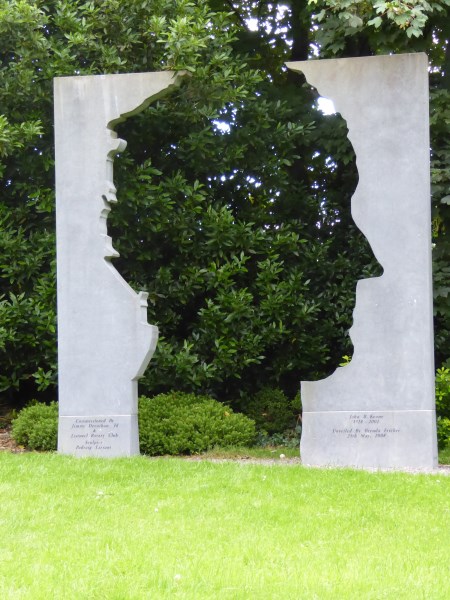 Patrick Tarrant’s innovative sculpture of John B. Keane is looking really well now that all the green foliage has filled in the outline.

Moses supposes his toeses are roses

Do you remember this piece of doggerel from your childhood? Well, the organisers of The Rose of Tralee competition, have decided that poetry is old fashioned and not suitable as a party piece so the girls have been told that they are not allowed to recite this year.  “Bah humbug,” say I. Poetry is timeless. The good people in Listowel Writers’ Week are doing their best to promote poetry. To this end they have entered into a partnership with Irish Book Awards and this year Listowel Writers’ Week will be sponsoring a prize in a new category….poetry. Read all about it here 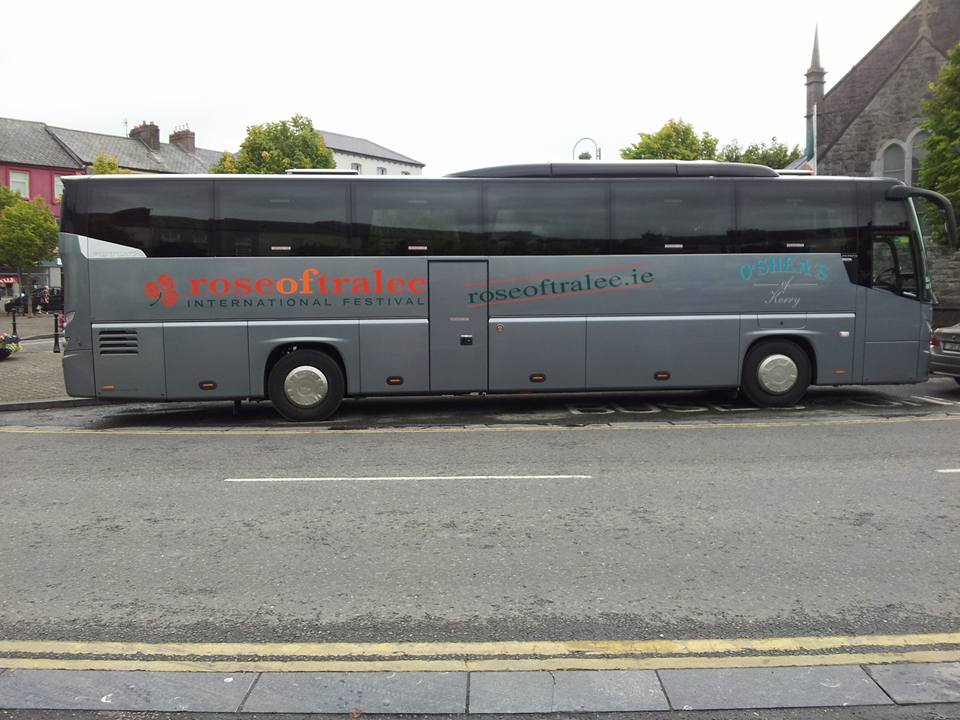 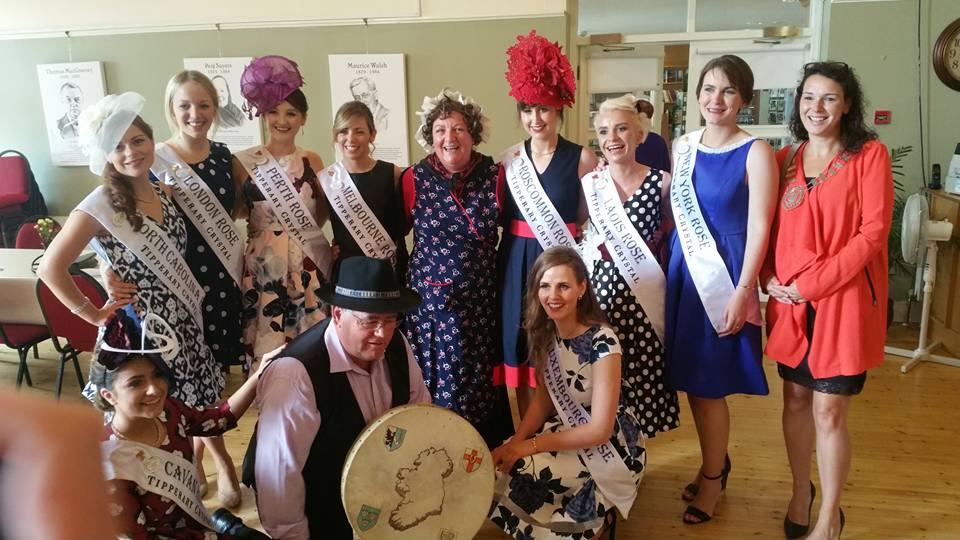 They visited the Seanchaí, John B.s and The Lartigue. They had their lunch at The Horseshoe.

We’ll begin with a smile, 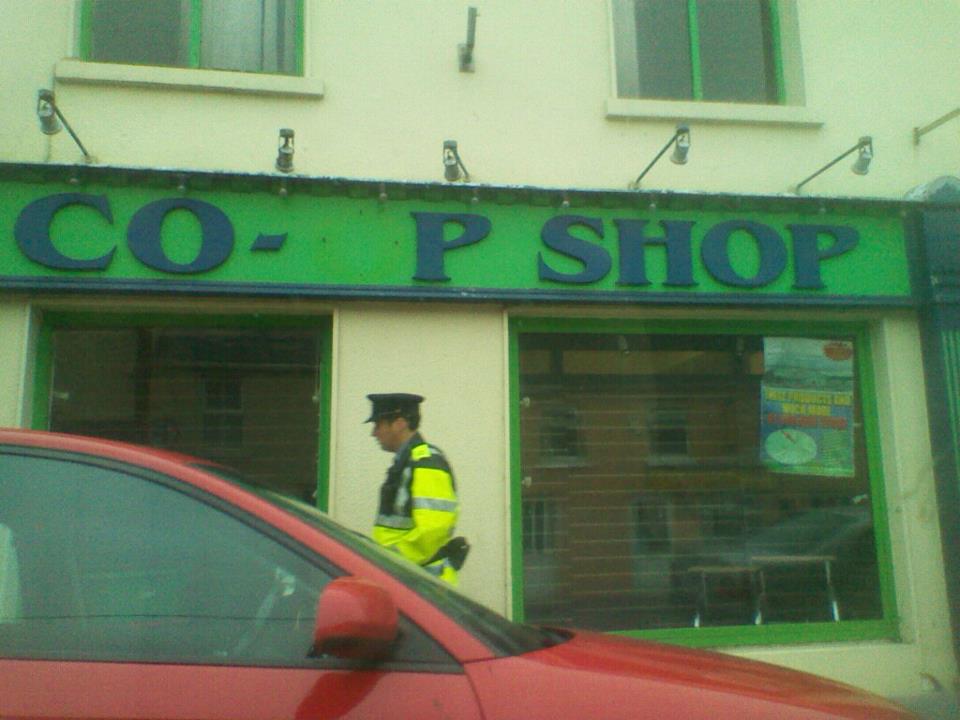 An eagle-eyed photographer snapped this in Kanturk.

This following is a Lawrence photo of the Square on a busy fair day. 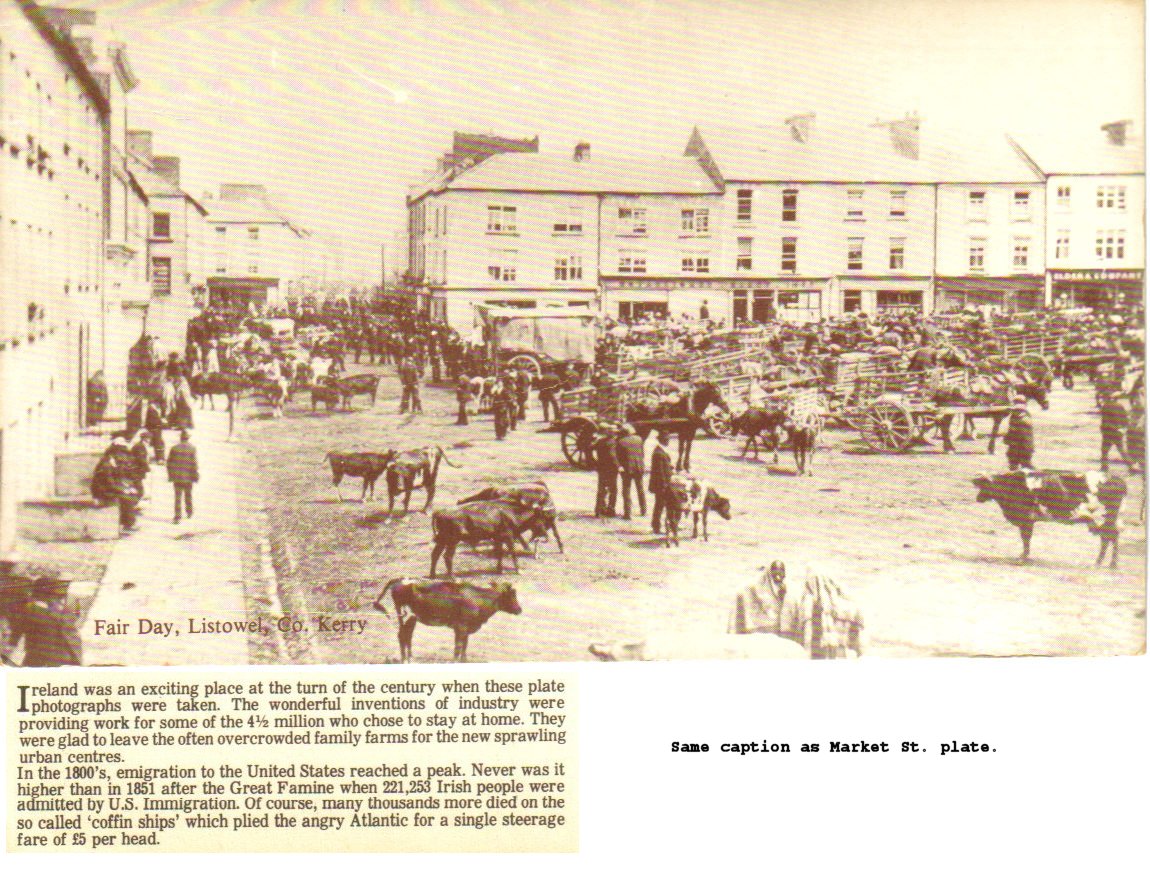 I am really surprised at the number of cows who appear to be unattended.

Next up is a more recent market day. 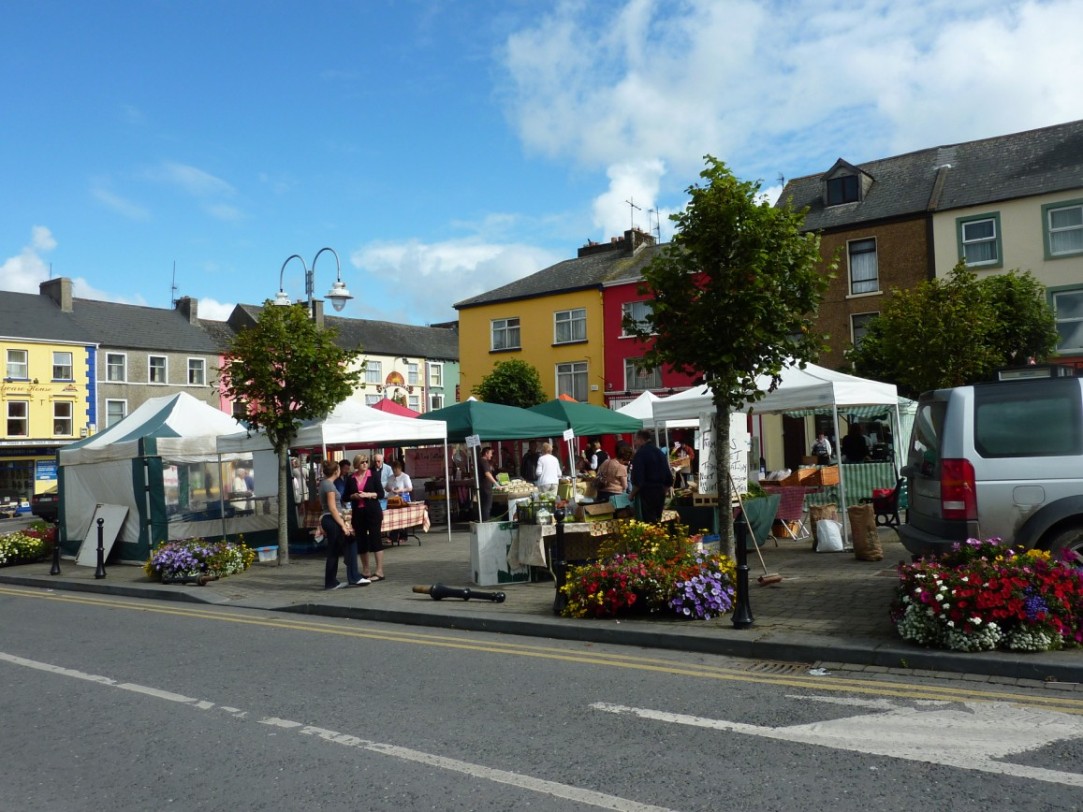 And lastly a few more of The Square for good measure. 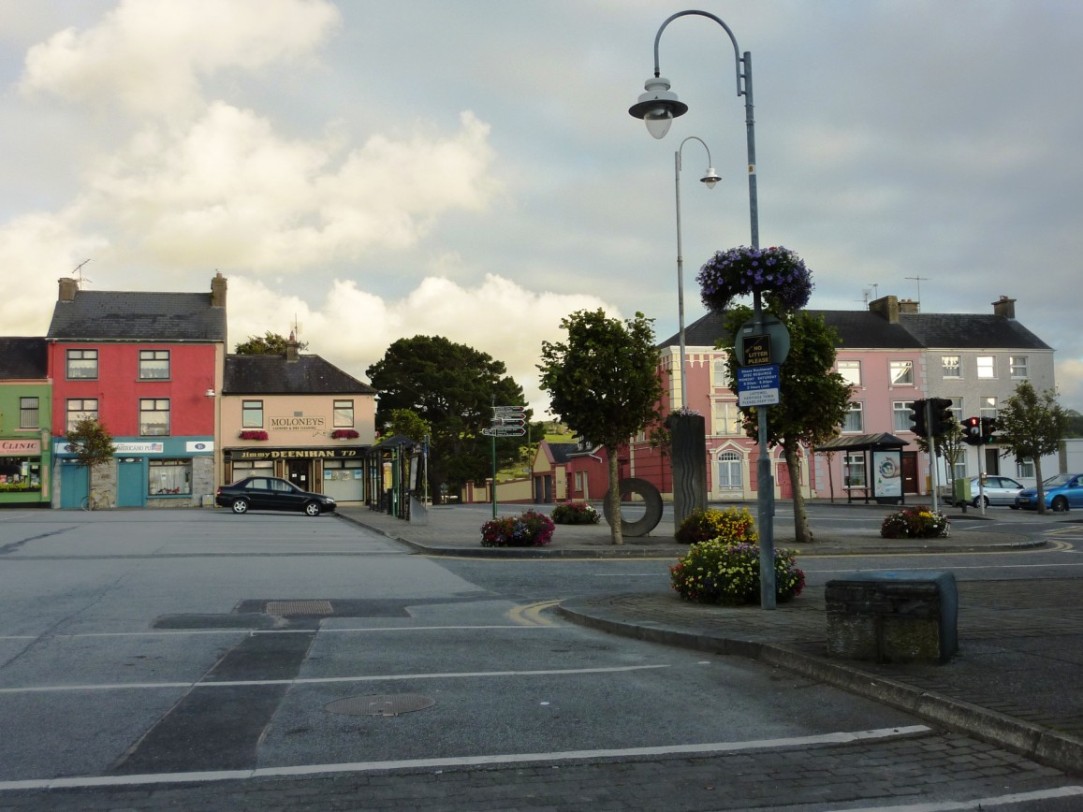 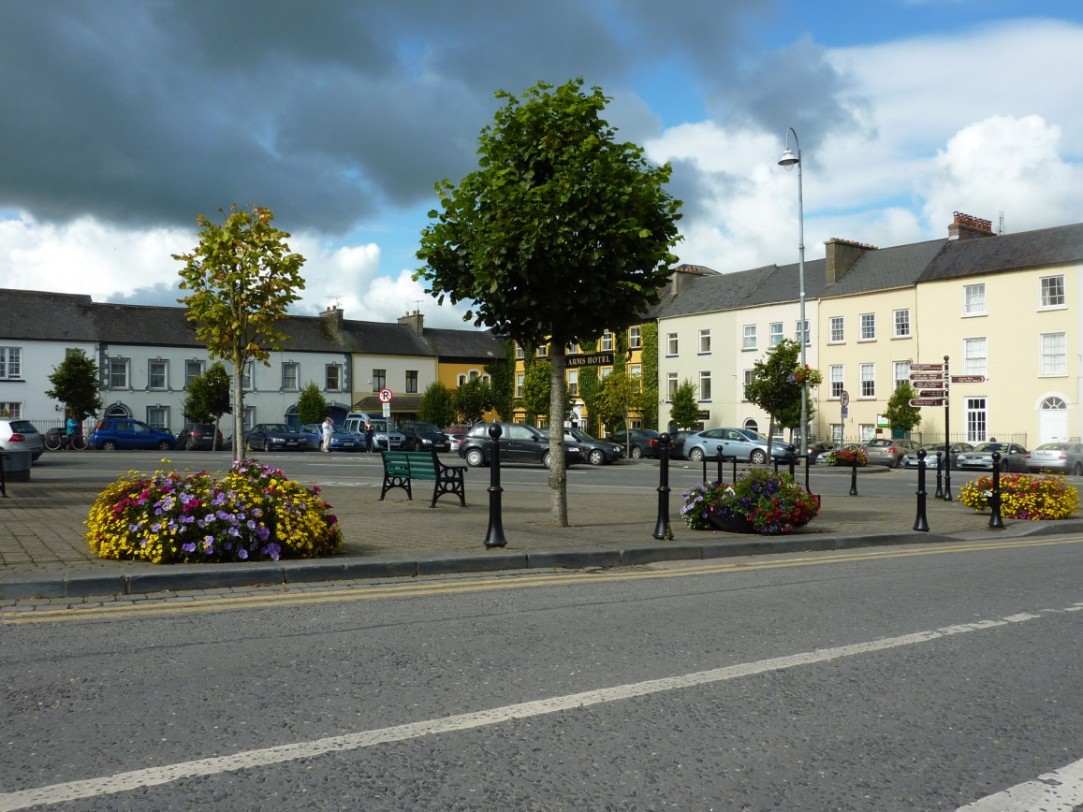 On the agenda, our UL training, our Week of Welcomes, our schools programme, website progress and much more.