Today is Monday, May 4 2015. It is the day after Listowel Military Tattoo. I was going to post photos and an account of the weekend but I’ll leave that for later in the week and today I will tell you my late mother-in law’s story.

My
mother-in law, Betty Cogan, became an Irish citizen in 1967. This extraordinary
event marked her as a special woman, an independent soul, a woman willing to
defy family and tradition to be as close as possible to the man she loved.

Irish
citizenship was definitely not in the picture when Betty was growing up in
Monument Road in Birmingham in the 1900’s. Her family was thoroughly British.
Her father, Henton White, was a local doctor, and a member of St. John’s
Ambulance. During WW1 he did his civic duty; he enlisted in the navy and served
as a ship’s doctor on board HMS Neuralia. He was knighted by the king, was awarded
a medal and his own coat of arms. He was appointed to the post of assistant physician to the king.
This meant that, if the king was in the Birmingham area, Henton White was
responsible for looking after his health.

Betty
grew up in this most loyal of households. She trained as a physiotherapist. At 21 she met and fell in love with a
dashing young graphic artist. His name was John Patrick Thompson and he worked
in Benson’s Advertising Agency. A big client of this agency was Guinness. John Patrick drew the cartoons for the “But
there is nothing like a Guinness” series and he gave the first drafts of
“walrus and keeper” and “fish in tank” to his girlfriend, Betty. Betty kept them all her life and they are
still in the family. Unfortunately, they are not signed but one is marked
“official secret”. Even in those days,
advertisers liked an element of surprise when they unveiled a new campaign.

Betty
had experienced her father’s long absences and all the attendant worry for the
family during the First World War so she was none too happy when John Patrick
“went for a soldier” in 1939, a few months into WW2. He was killed in action in
France shortly after landing there.

He wrote Betty a letter dated 6 Sept. 1939
from HMS Arethusa on his way to the front. We found this letter among her
treasures after her death. John
Patrick describes in detail the awful conditions aboard ship. Because they were
sailing through dense fog, John Patrick went below to avoid the cold and damp,
The decks “had become cold, slippery and draughty and most people seemed to
prefer the sweating between decks.” “I
went below once during the night, and some 350 men occupied the saloons and
gangways-all asleep, on stairs, across tables- it was as if living men had been
killed by gas. It was an amazing sight.”

John
Patrick describes in detail arriving in Dieppe and his journey through the
French countryside. “France looked so soft and peaceful.” He had visited France
previously and had hoped to see some of the sights again but their train
journey was through the night. “Arles looked like a special kind of dream
city.” He finishes by saying that the adventure was not as bad as he feared and
“that is all I can say until the whole journey is a thing of the past.”

Alas,
it was his last letter and he, like so many thousands of likeminded young men
perished in the following days.

We
can only imagine how devastated Betty was on hearing of his death. She
remembered him always and told her children about him.

Of all the
words of tongue and pen

In
Cork in 1921 another young man was growing up and becoming embroiled in another
war. Tom Cogan had seen his older brother, coincidentally also named John
Patrick, enlist in the British Army and
die in the third battle of Ypres in WW1.
His name is engraved, with thousands of other casualties on the Tynecot
Memorial.

Tom took a different course. He took an active part in the  War of Independence.

Tom
was working as an apprentice fitter in Haulbowline, Co. Cork. and living at
home with his mother and unmarried sister. He was a trusted employee and no one
suspected that he was smuggling out materials under the noses of the British
Army and using his skills as a fitter to make  “metal plates” to be used in the making of
ammunition.

When
he finished his apprenticeship, he secured a job in Ford’s of Cork. Like many
other young Cork men at the time he moved to work in Fords in Dagenham in the
early 1940s. He did not work in the main plant but in the Ford foundry in
Leamington. In the boarding house where he lodged he met and fell in love with another lodger, Betty White. They were married in Birmingham in June 1944 and relocated to Cork
with their firstborn in 1945.

A
letter from his workmates to him as he was leaving England shows that Tom was a
poacher turned gamekeeper. He kept a close eye on all of Ford’s materials and
every screw was accounted for. 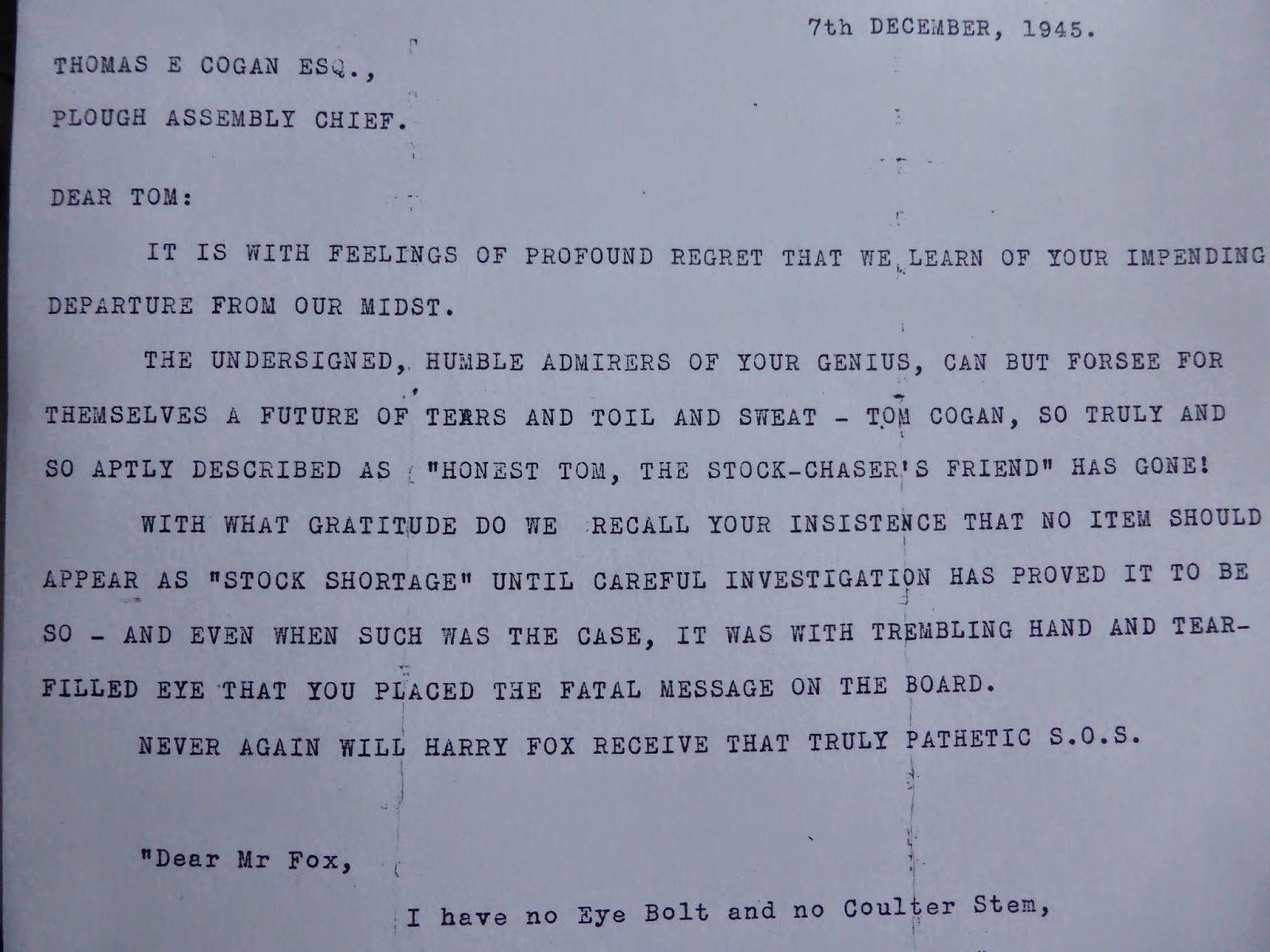 Betty
Cogan, my mother-in –law, lived through two world wars. She had 2 great loves
in her life, each of them an honorable hard working young man. The fickle finger of Fate decided which one she was to lose and which one to marry.

(Jim’s family,  Patricia Cogan Tangney and Martin Cogan helped me with some of
the details of this story.)