When John Lenehan decides to do something, he doesn’t let something as trivial as age stand in his way.

When John wanted to connect with the land of his ancestors, he didn’t just visit, he bought a house and came to live here.

When he decided to finish his education, he enrolled in Fordham College and completed the course he had started 66 years earlier.

He graduated last week with students young enough to be his grandchildren. That did not daunt John. His proud family were among the cheering throng.

From all your friends in North Kerry, John, congratulations. We’re proud of you too.

A little birdie told me that this is the work of Paud Pelican. Isn’t it a marvel?

A Poem because It’s Writers’ Week

On Saturday May 28 2022 as I was walking through The Small Square I met this gaggle of escapees from a Nursing Home.

They were a Hen Party from Clare and they serenaded me with their local anthem, My Lovely Rose of Clare. The bride- to -be is a nurse so the “oldsters” were in safe hands.

Lovely to see life getting back to normal!

Josef Locke was a very popular tenor in the 1940s and 50s. He came from Derry. He sang is an over- the- top grandiose style and his life was equally grandiose and over- the- top. He married 4 times.

For a few years in the 1960s Locke owned The Listowel Arms.

I discovered this fact when I was preparing for my Morning Walk on Friday next, June 3 . I will be accompanied by singers and historians. I promise you that you will hear some other little known facts about Listowel. There wll be some facts that everyone knows as well.

Goodbye, goodbye, I wish you all a temporary goodbye

I intend to enjoy Writers’ Week this year as a punter. I intend to attend every gig I can. I’ll take lots of photographs and I’ll be back to blogging when I recover.

A Hen Party in Ballyhoura and Kildorrery

A Weekend in Ballyhoura 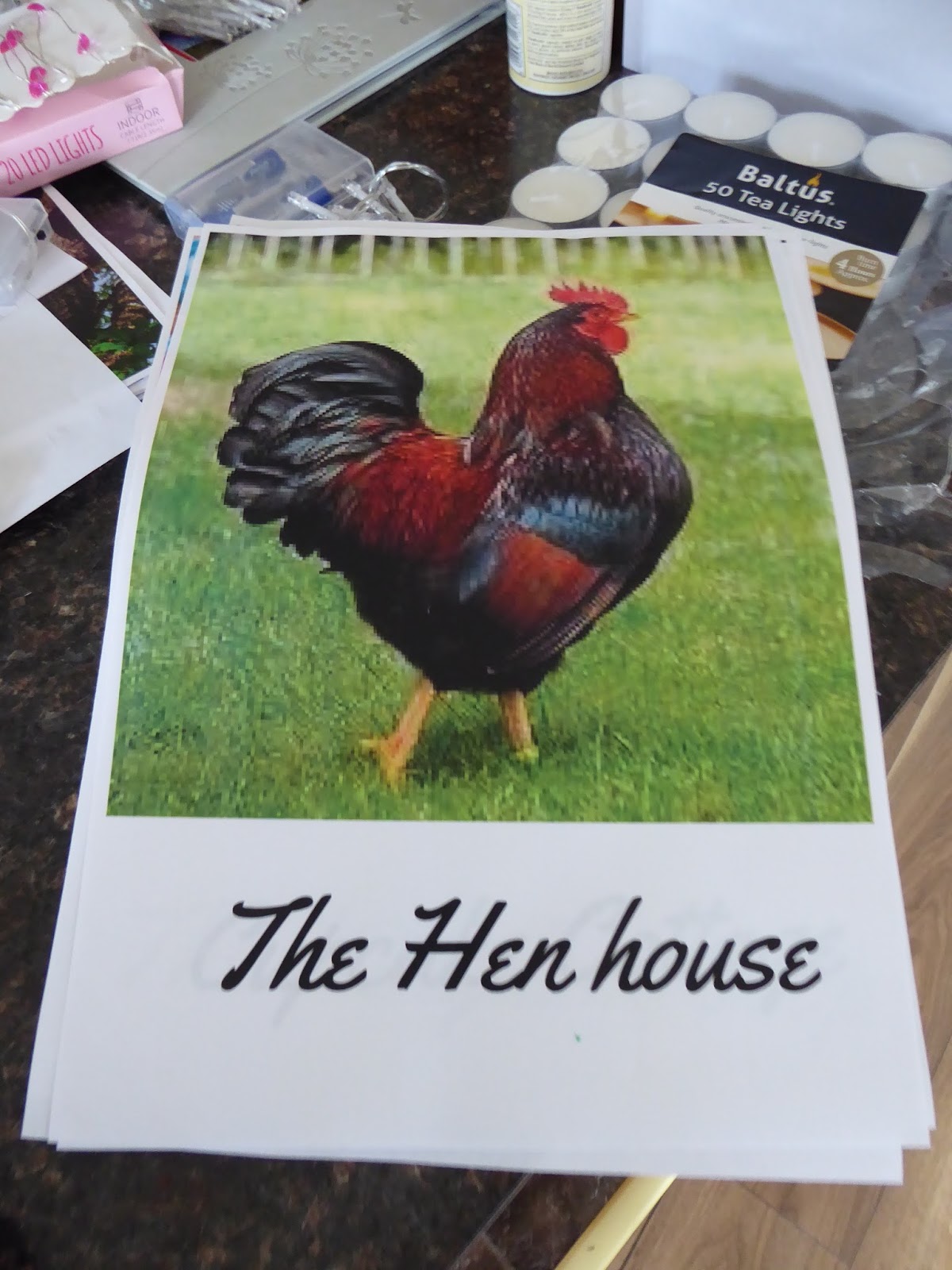 ‘Tis not today nor yesterday
I was last invited to a hen party. But that is where I was recently and without
doubt it was the very best hen party I was ever at. 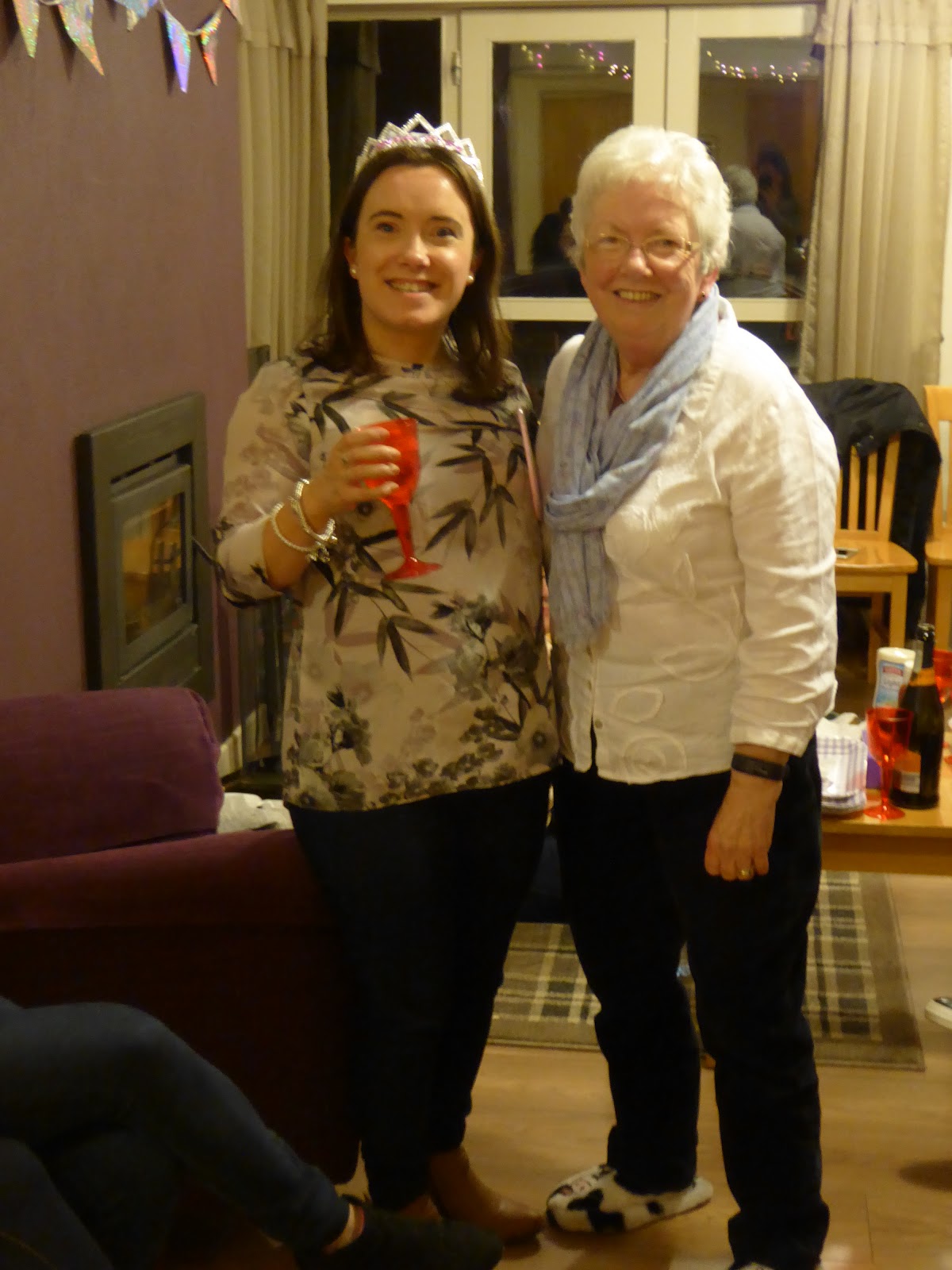 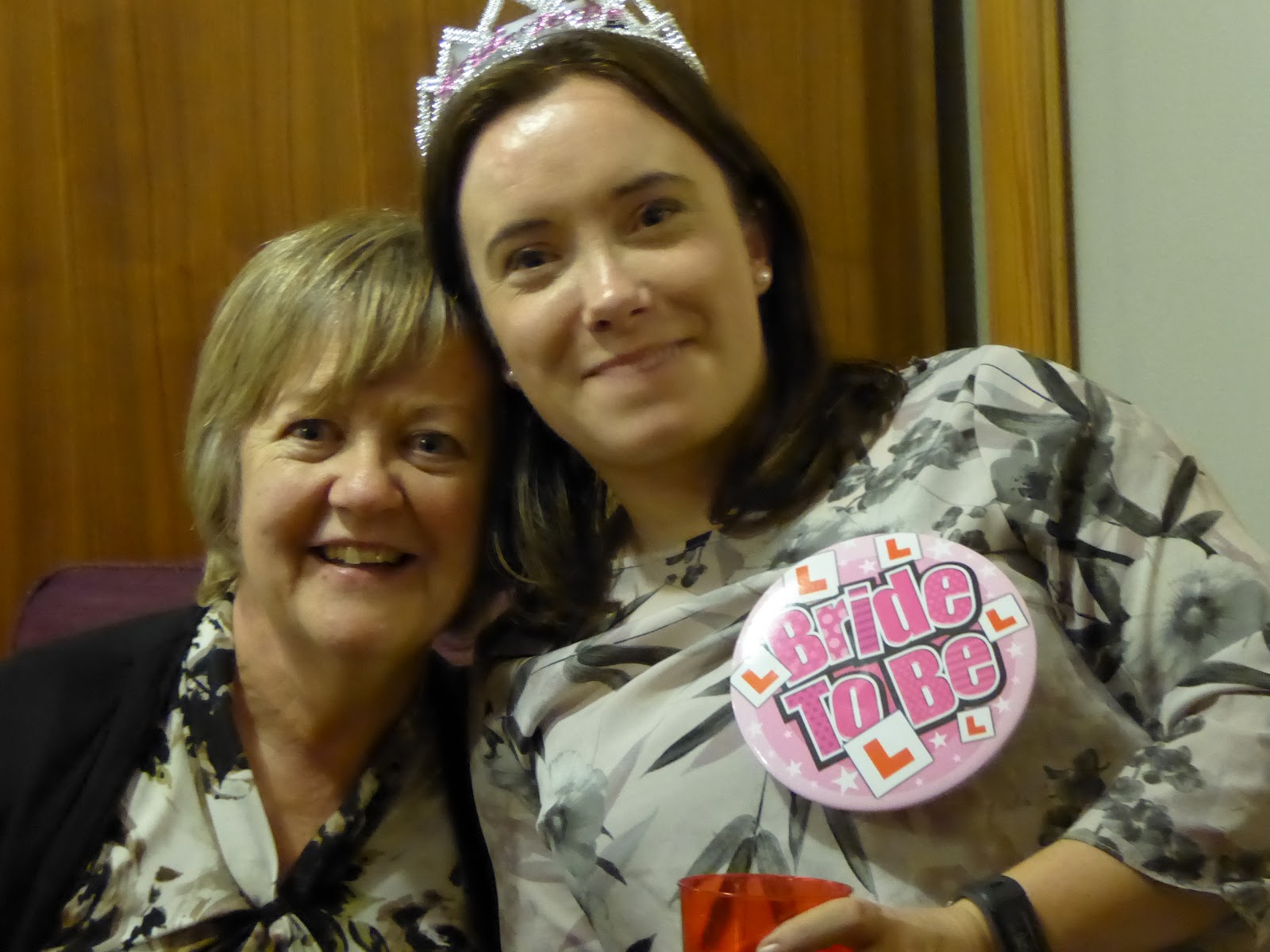 A hen party with the mother of the bride and the soon to be mother in law of the bride in attendance was always going to be a tame affair, or so we thought. 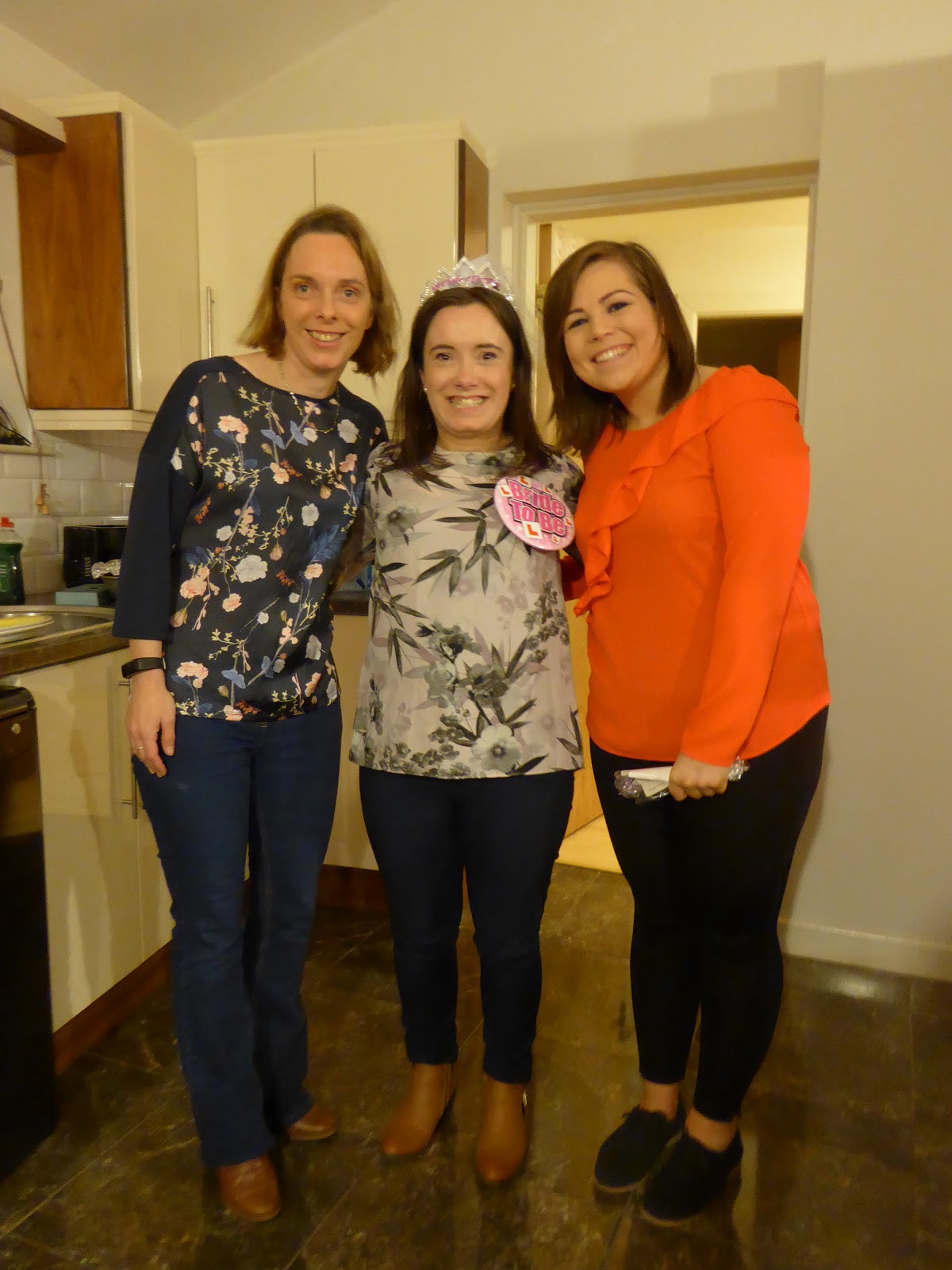 The hen in question was my
lovely daughter, Clíona, and the party was organized by her two super organized
bridesmaids, Darina and Anne. 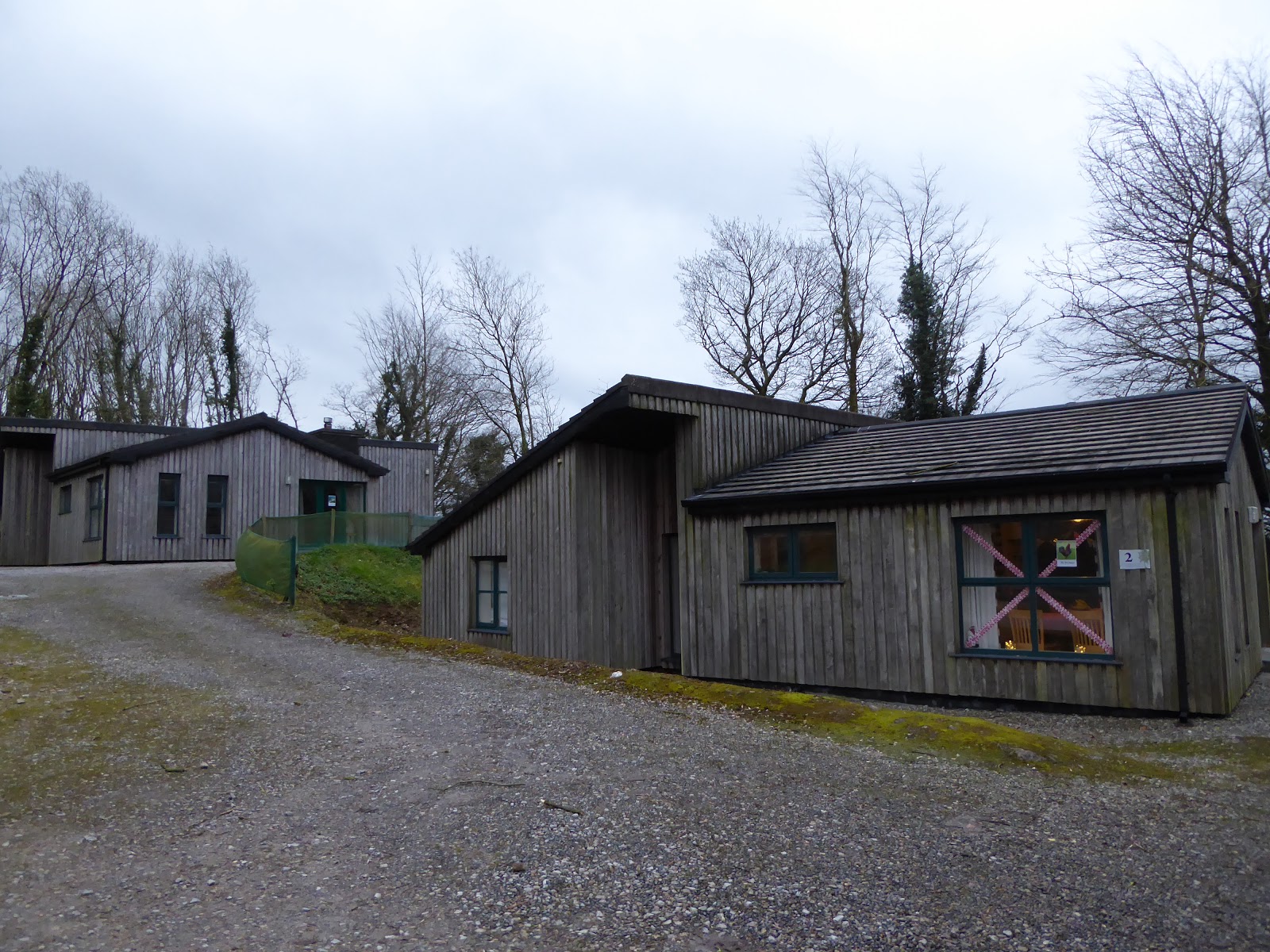 The venue was Ballyhoura
country. We stayed in some lovely mountain lodges:

(Ballyhoura Mountain Lodges) nestled into the hillside.
Ita, who runs the show here was super helpful before the event and was on site
late on Friday evening to settle us in. Think cozy log cabins, roaring fires, toasty
warm rooms and the most comfortable beds ever. (Very poor phone coverage but
who needs a phone when you are having fun?) 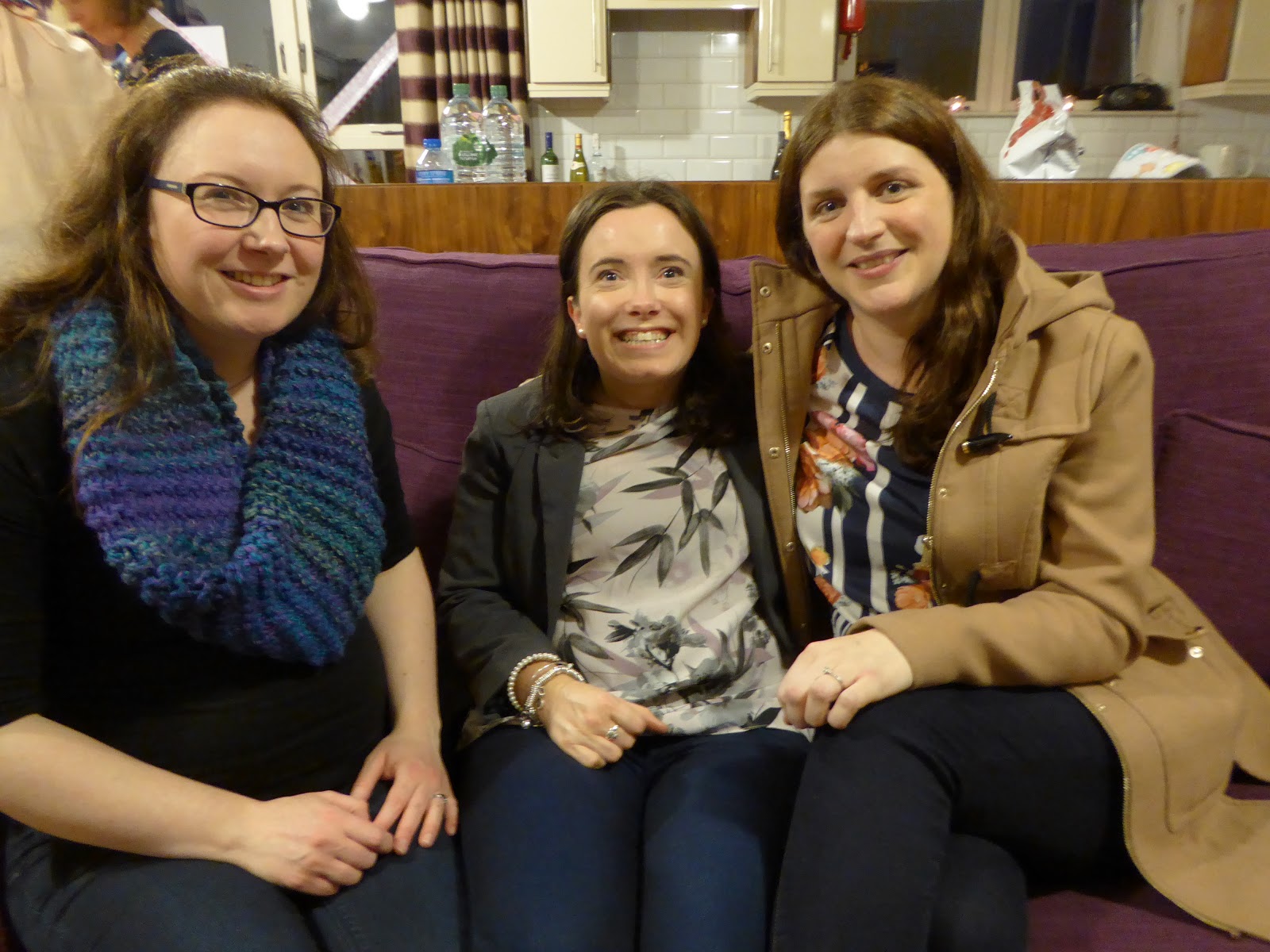 We had some ice breaking
activities, a few drinks and lots of chat and catching up. And so to bed. The above picture is Clíona with two old friends, Fenella and Emily who are soon to be mother hens. 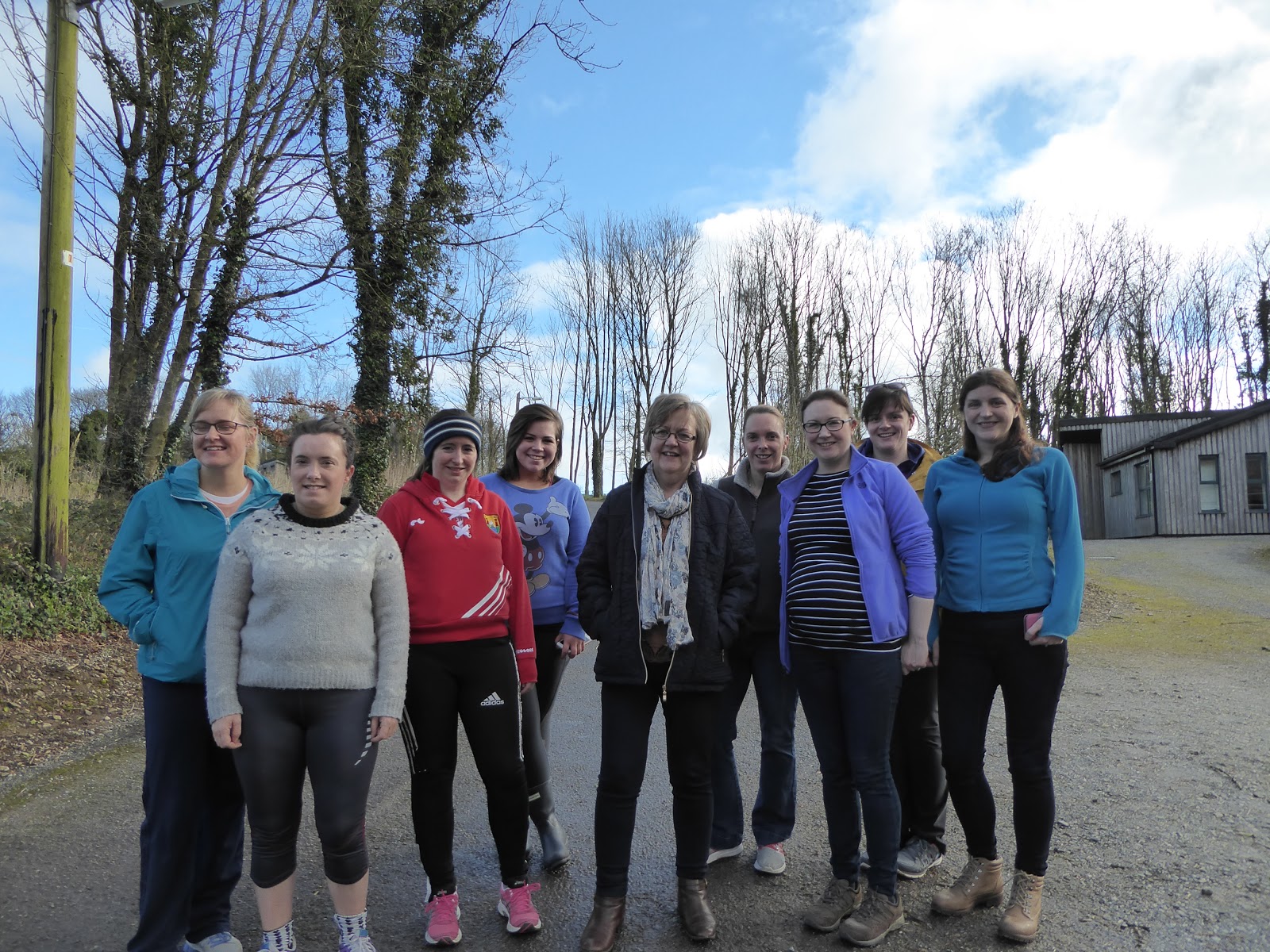 Breakfast over in the hen
house, we headed out for our morning walk. Ballyhoura is famous for trecking,
cycling and horseriding. We didn’t really feel up to these but we took a gentle
walk through the woods. The bride to be was up for a spot of ziplining on the
way. 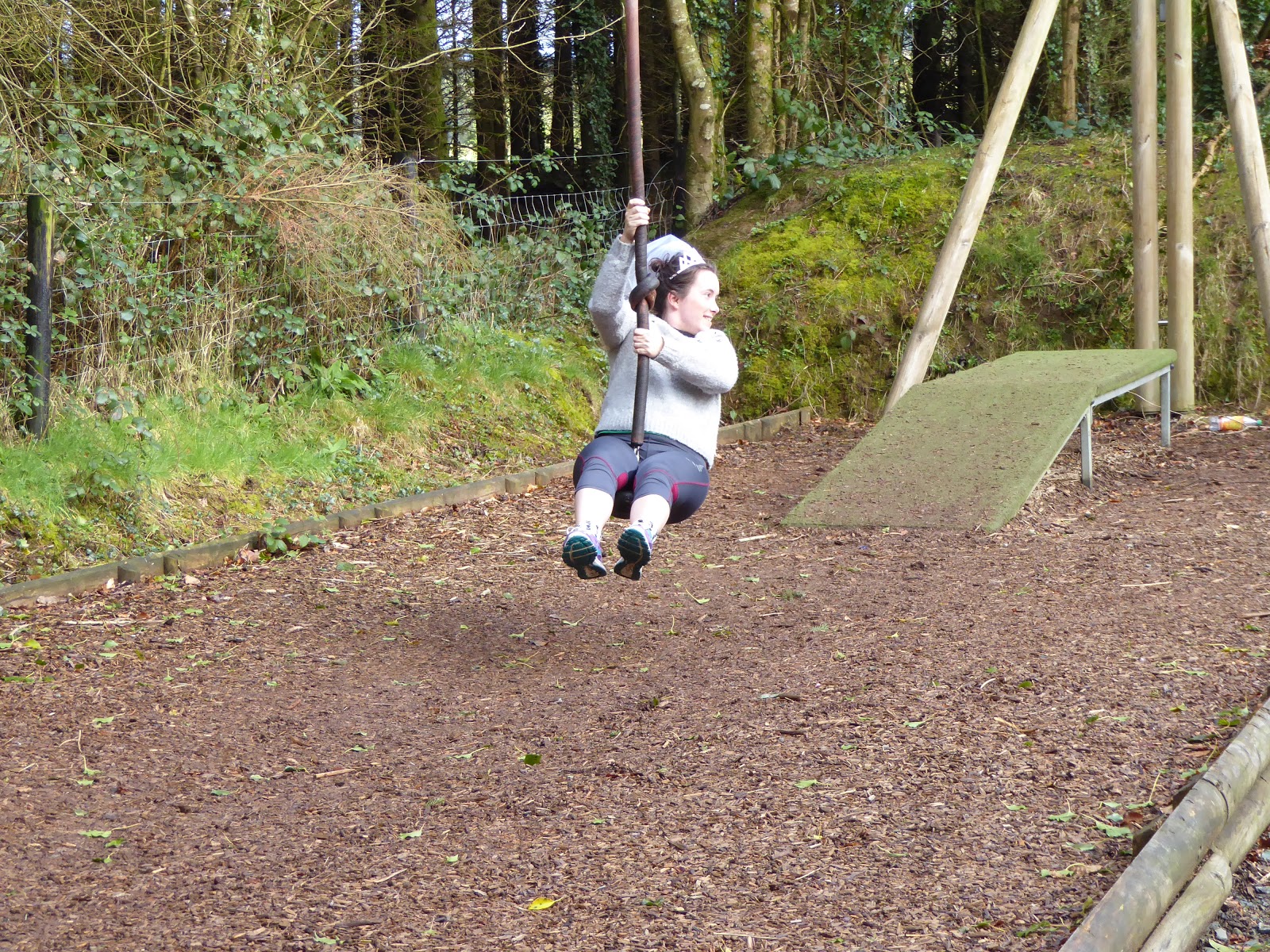 We stopped to view Castle Oliver
and the hotel where Kim and Kanye West holidayed. 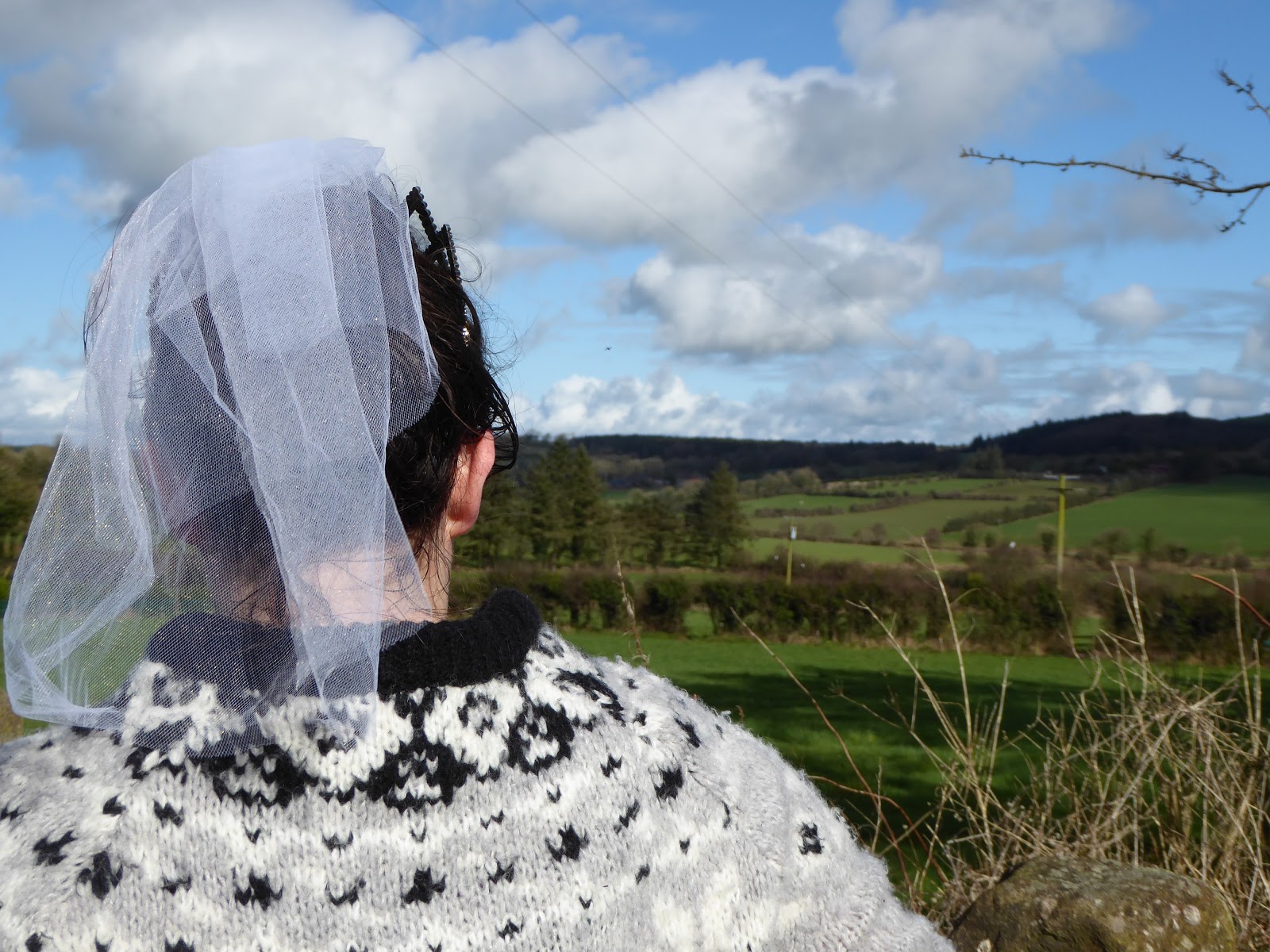 Back in the lodges we ate
quiche for lunch. The quiche was provided for us by the ever dependably
delicious Thatch and Thyme. 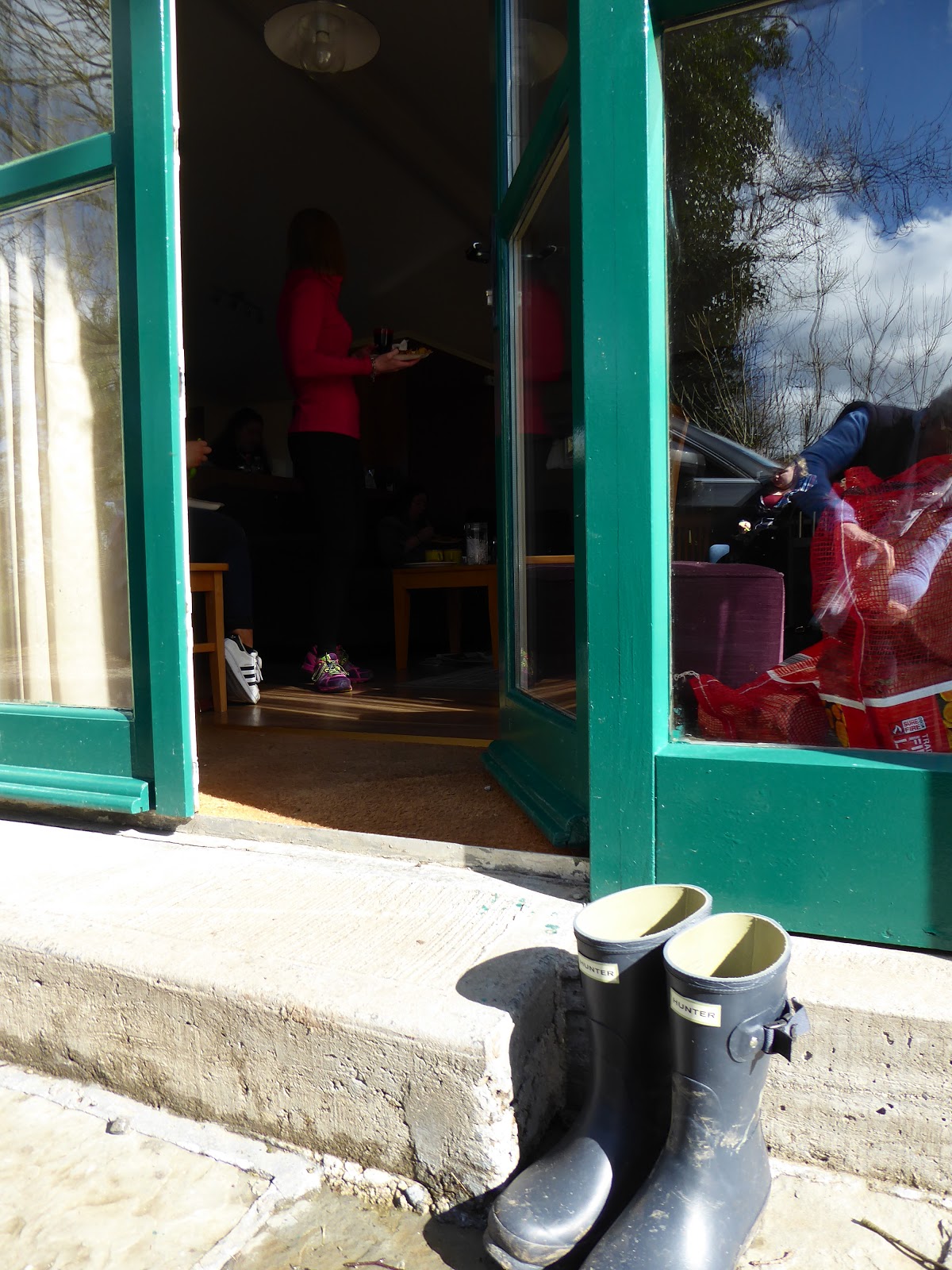 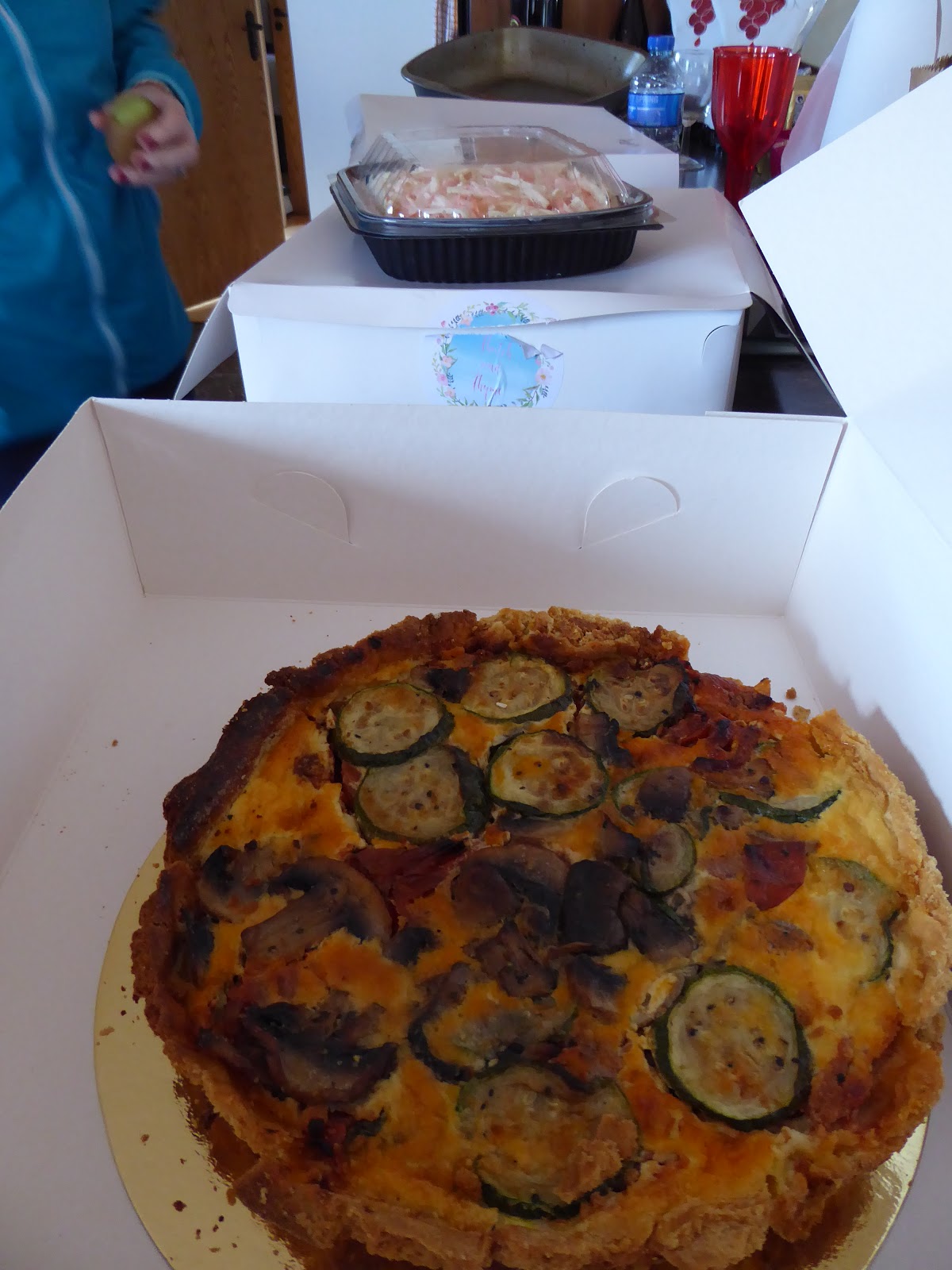 Saturday afternoon’s activity
was The Great Ballyhoura Bakeoff. We
were divided into teams and tasked with preparing cupcakes which in some way
described The Hen. Our group made a chocolate and prosecco variety because the
hen is sweet and bubbly. 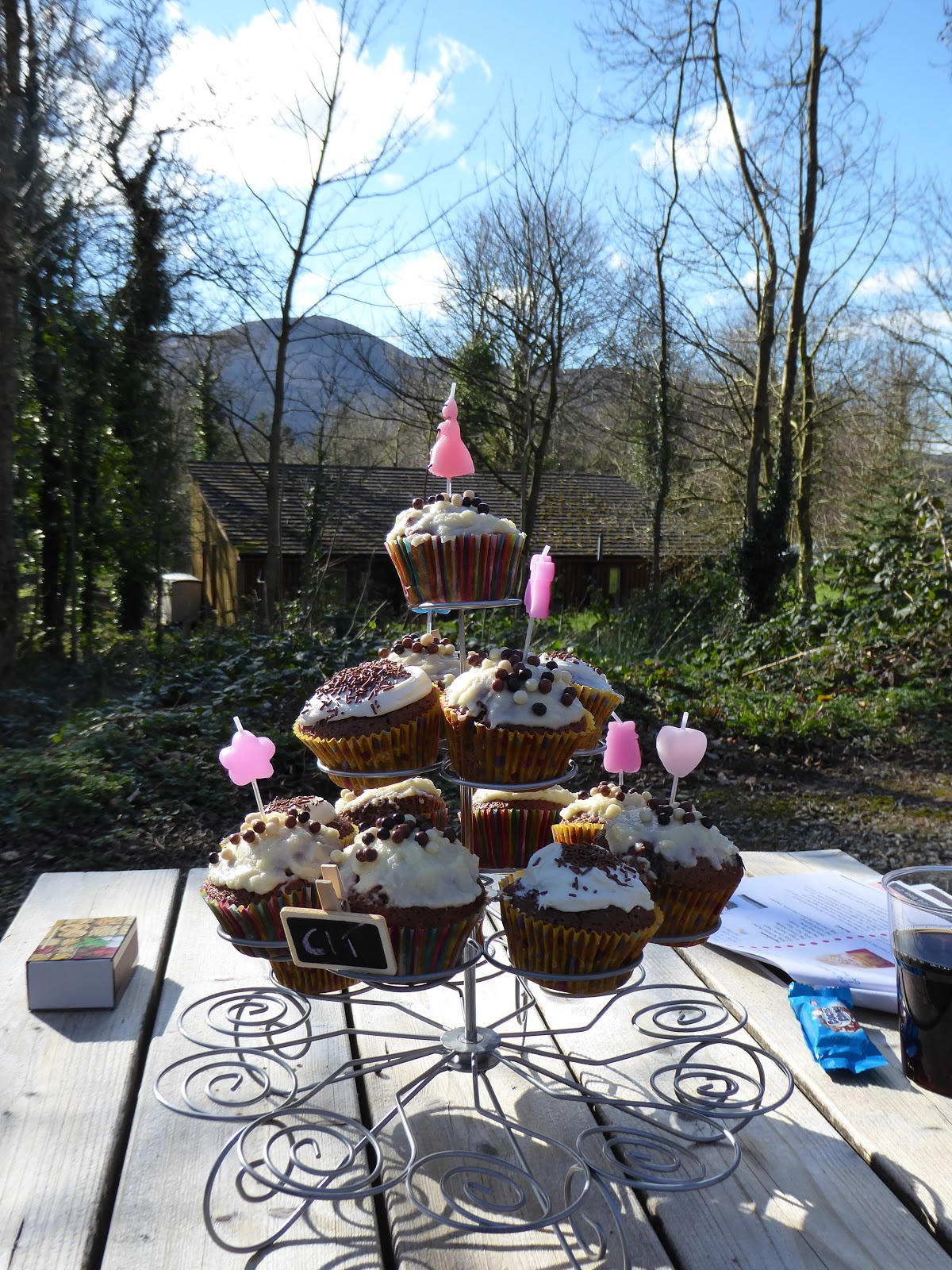 Because Ballyhoura was
basking in glorious sunshine, we held this activity outdoors. 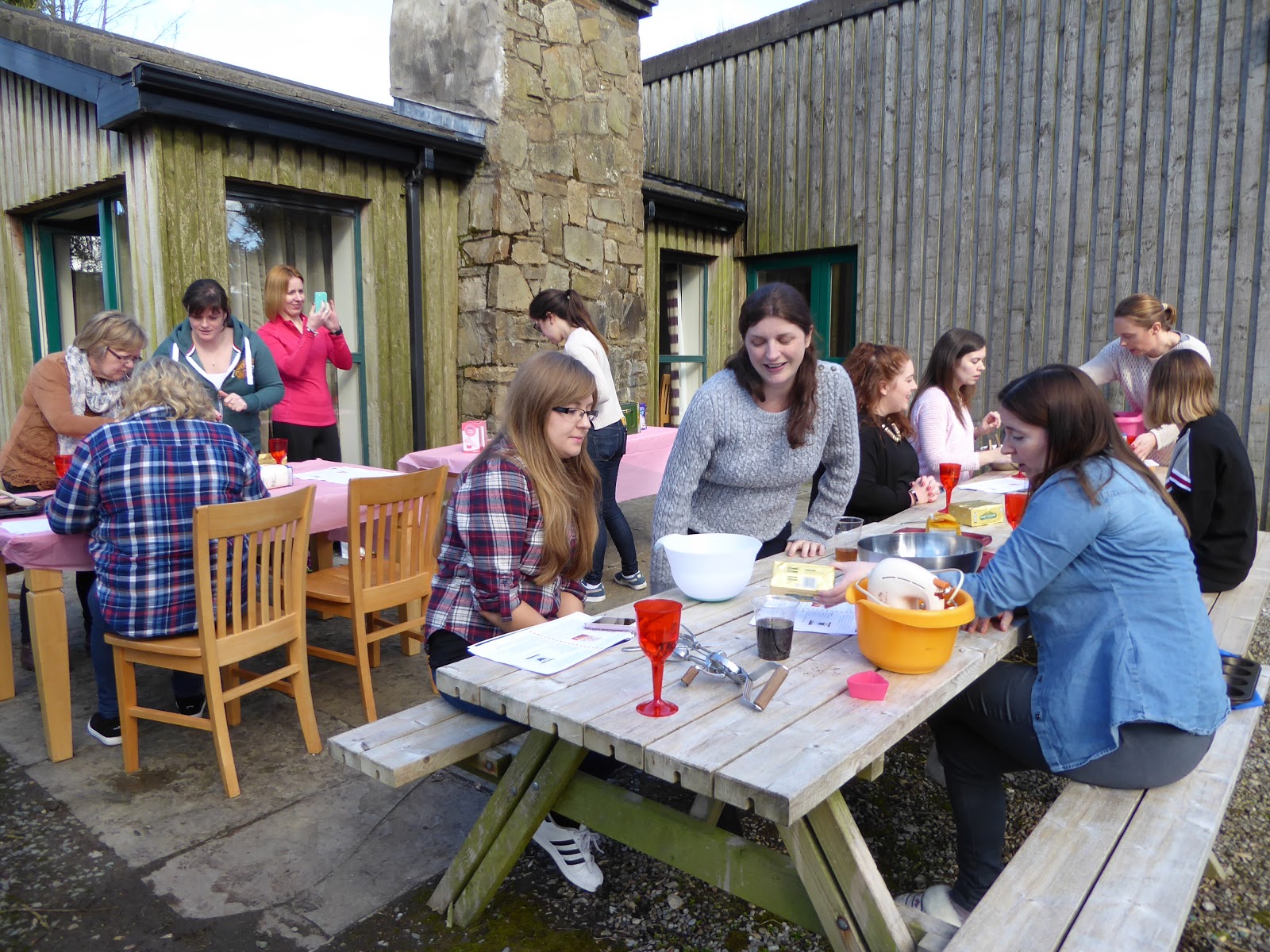 The Hen sipped on a glass of
prosecco as she oversaw the baking. 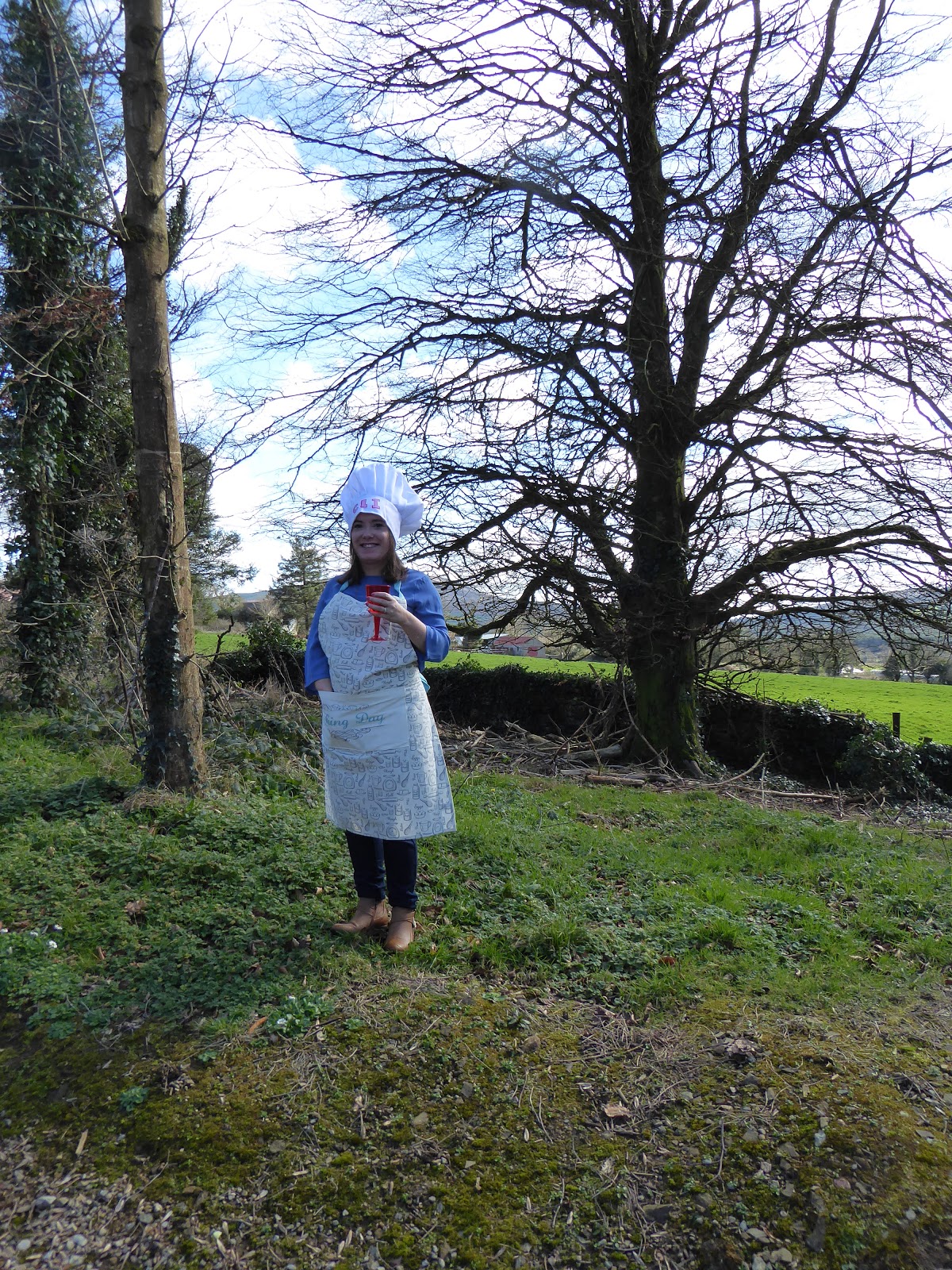 We beat and mixed and
weighed and the oven worked overtime. 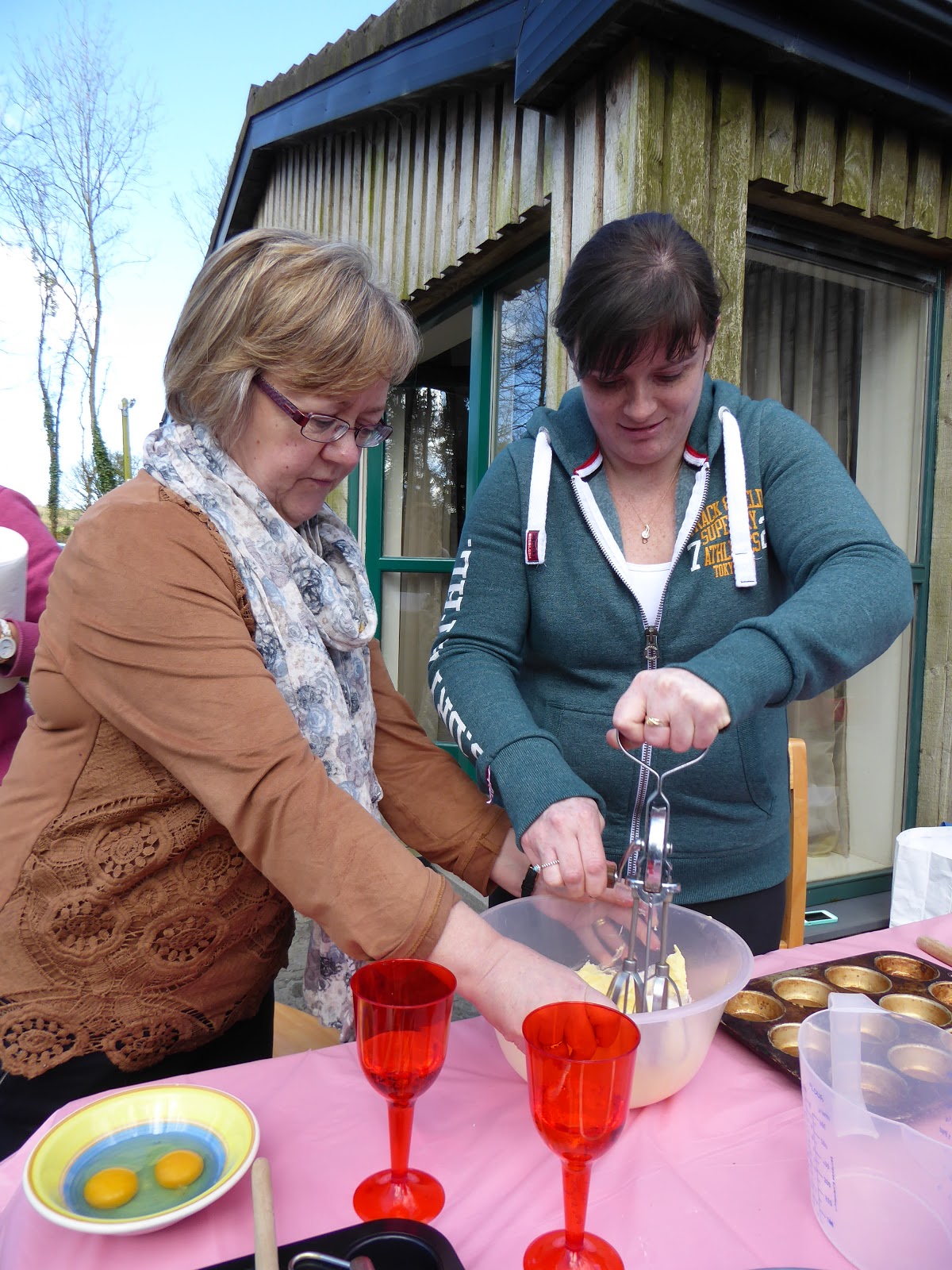 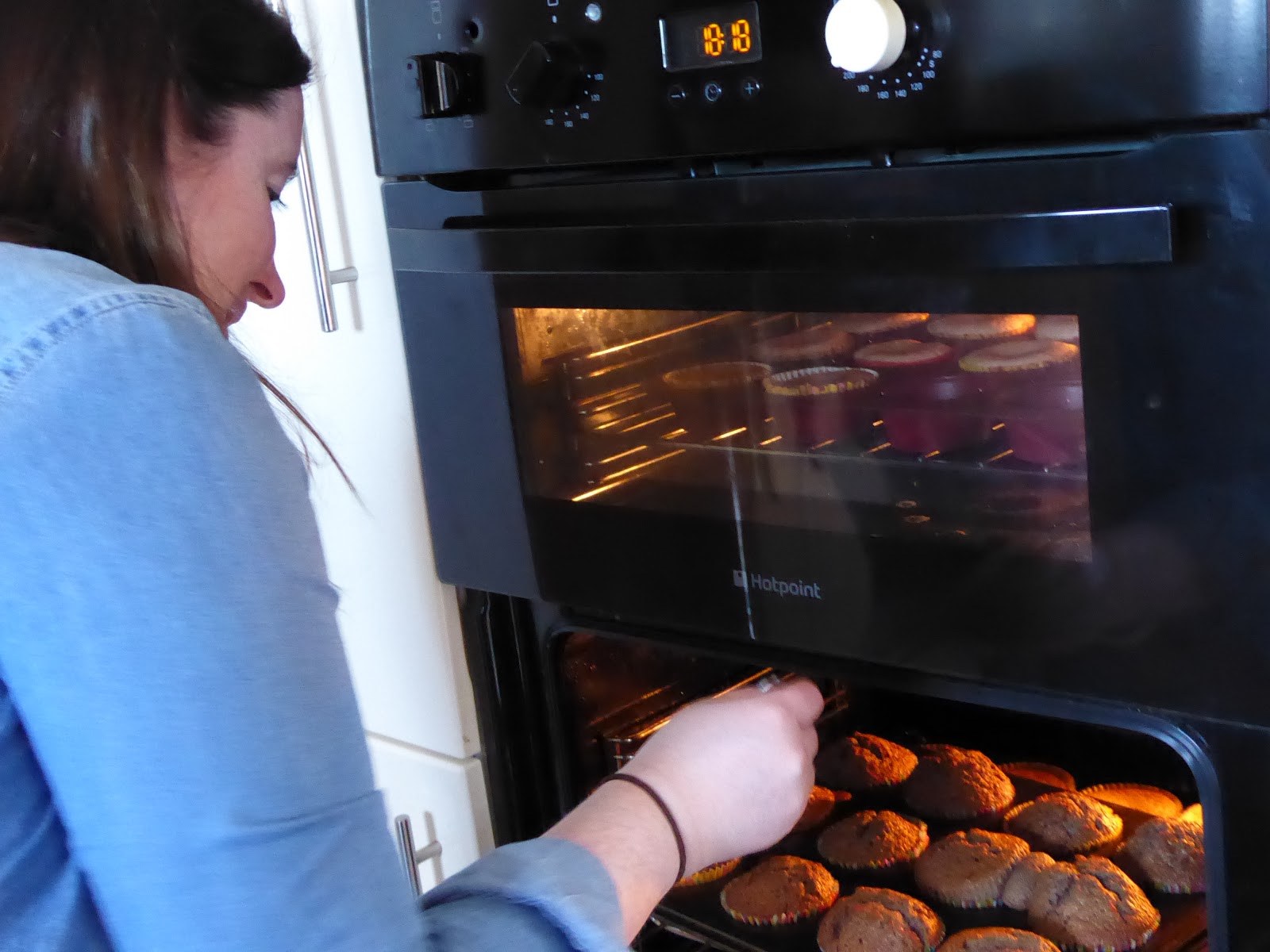 Soon we undertook the
decorating. This was literally and figuratively the icing on the cake as the
winning group definitely impressed the judge with their hand beaded display
which spelled out her name. 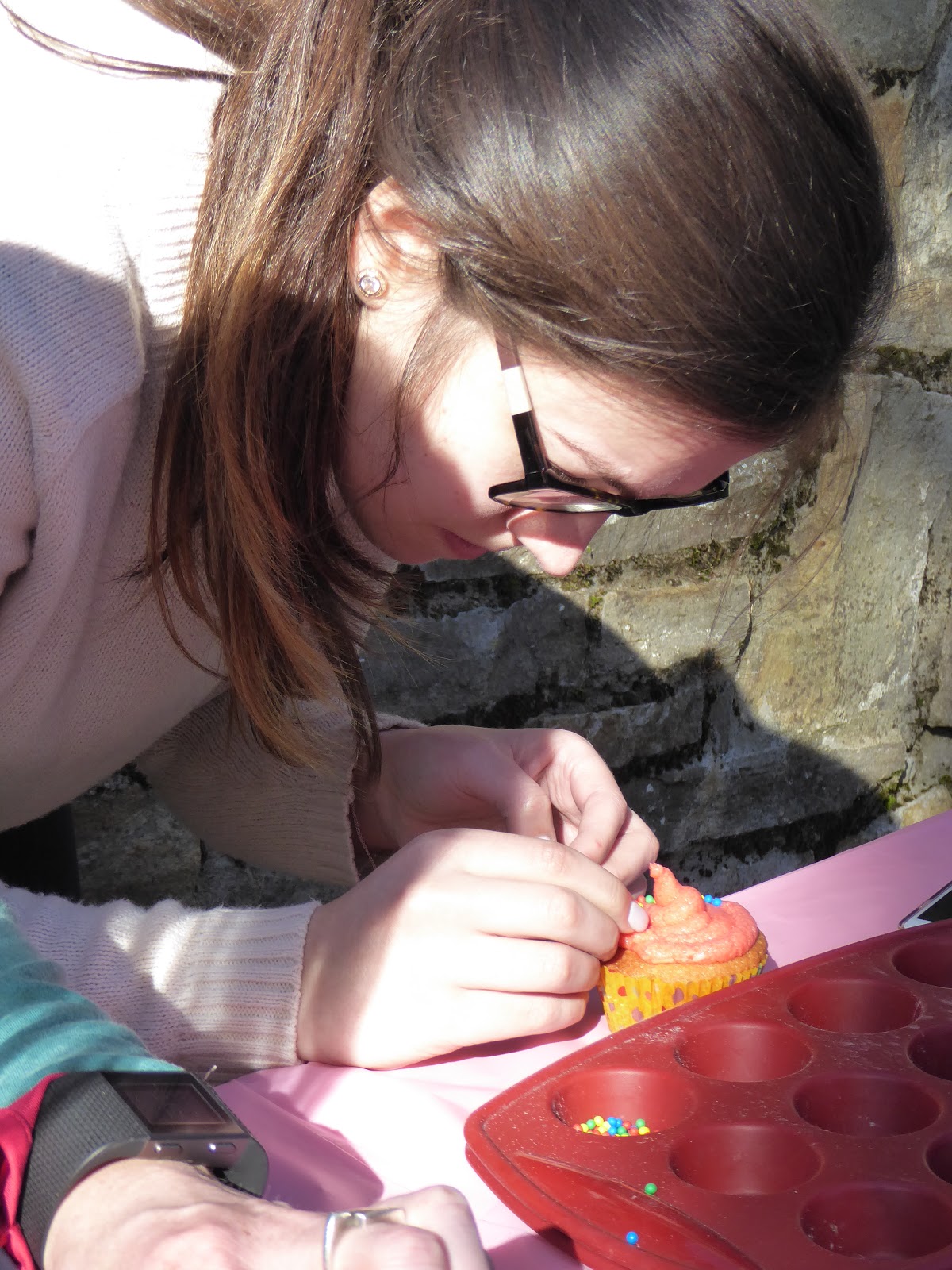 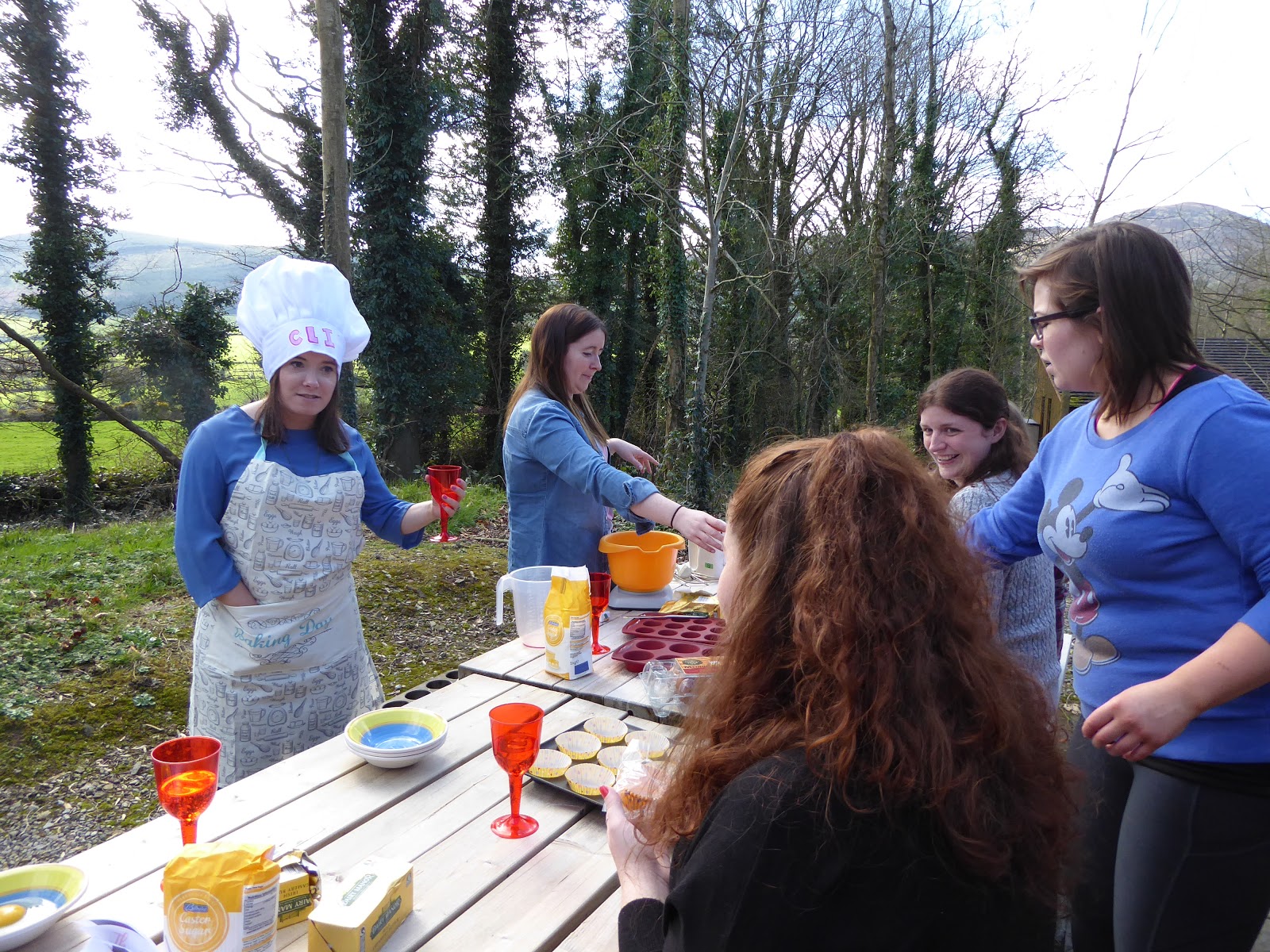 My group fell at the last
hurdle. While my team’s cupcakes were delicious, our icing left a little to be
desired.  But our finished display definitely excelled. 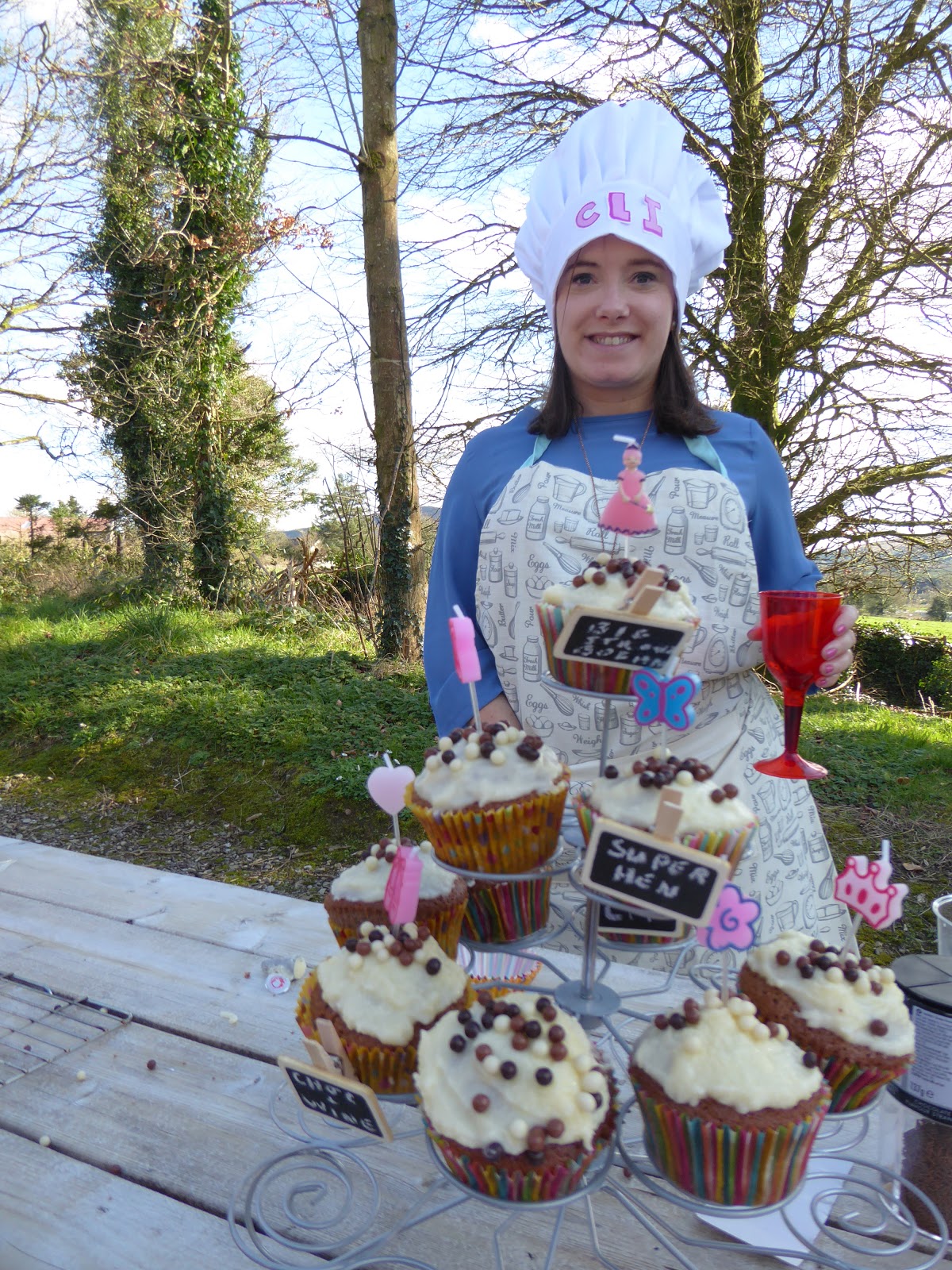 Tasting and judging was
carried out while the bakers pitched a cheesy pitch full of flattery and
sycophancy, in an attempt to sway the judge. 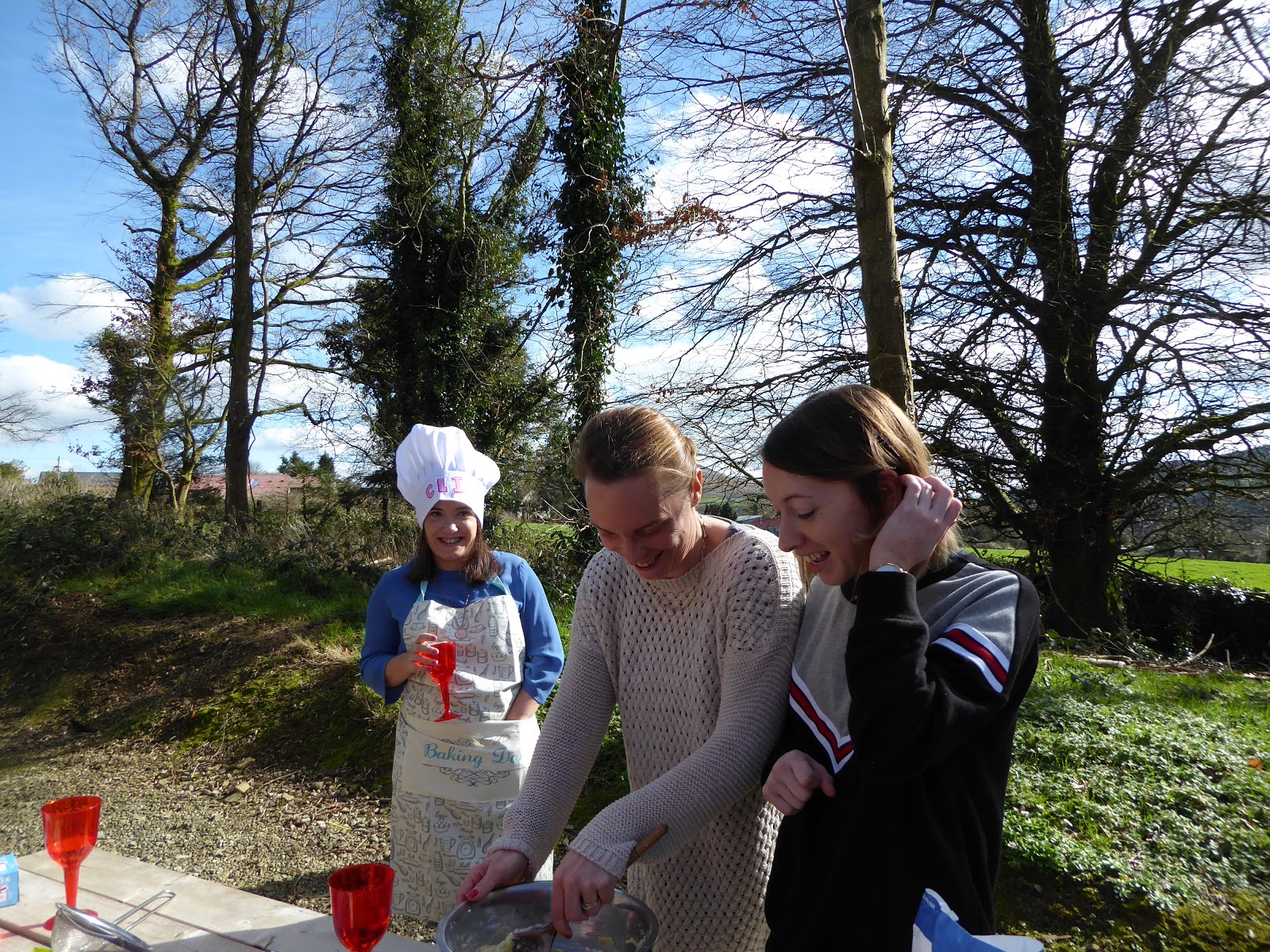 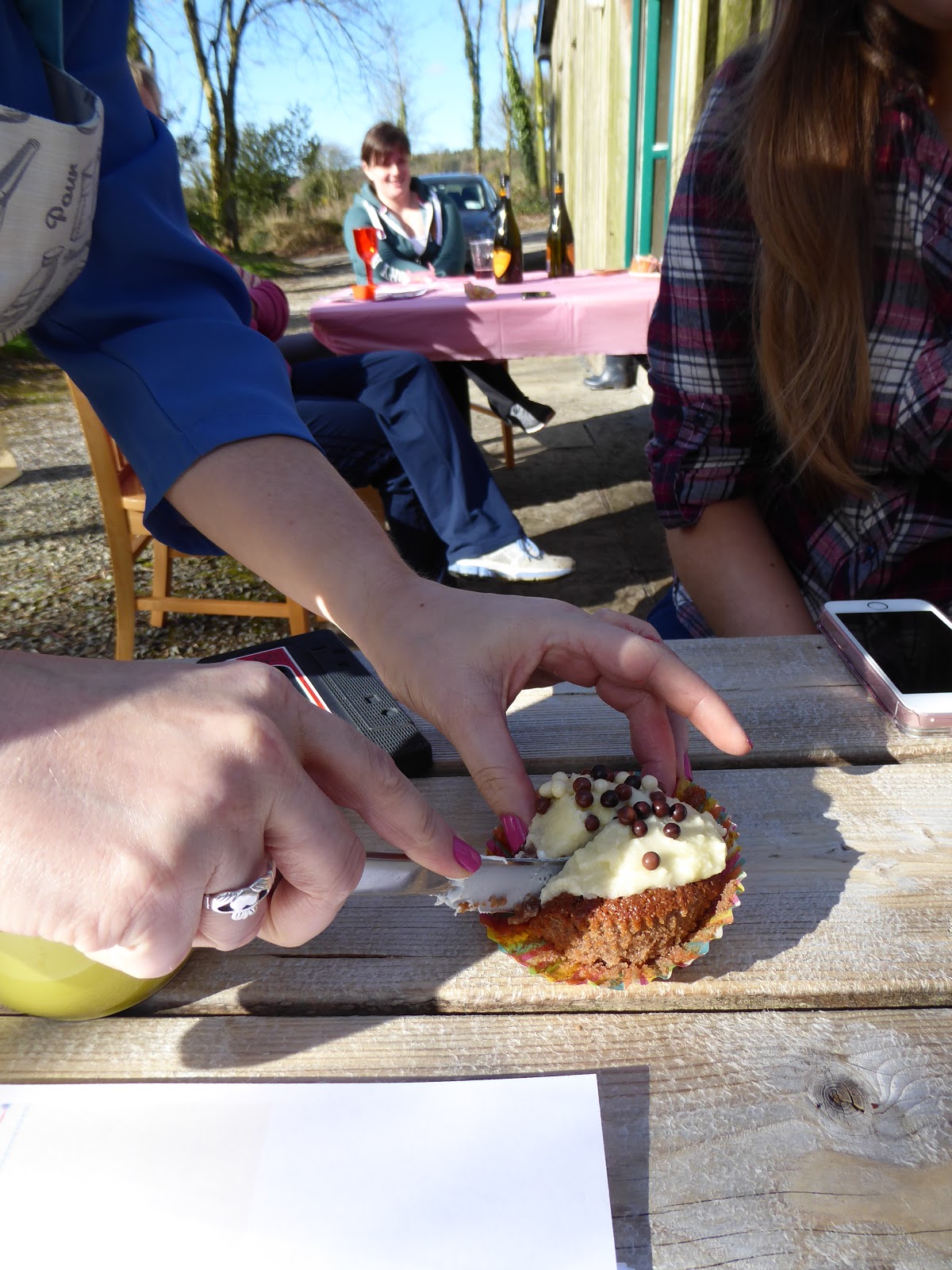 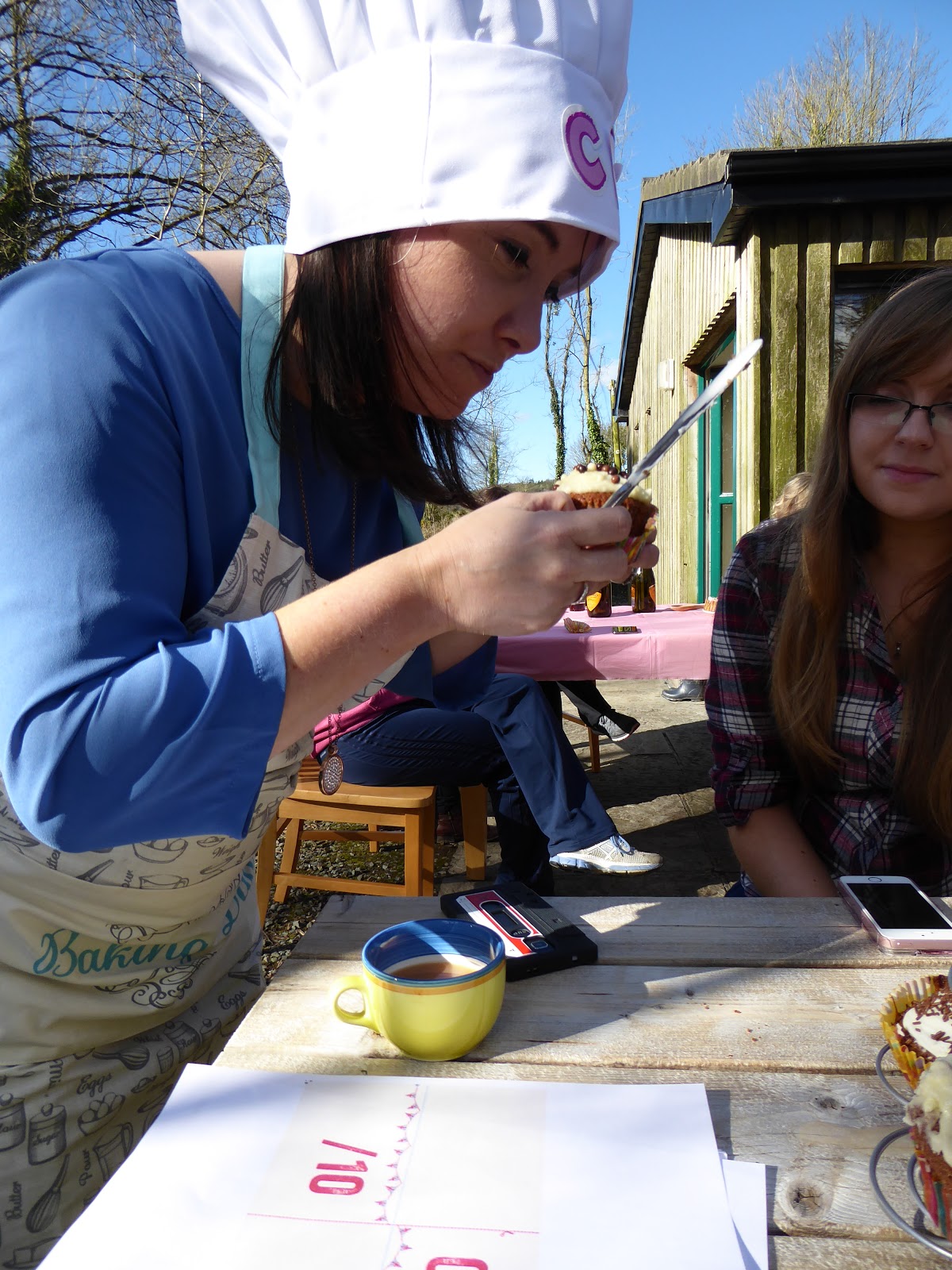 The winners declared, prizes
given and we all fell to eating the spoils. The raspberry and vanilla were
agreed deserving winners with the blueberry buns second. ( I had actually
brought the blueberries for my breakfast, but all’s fair in love and war….) 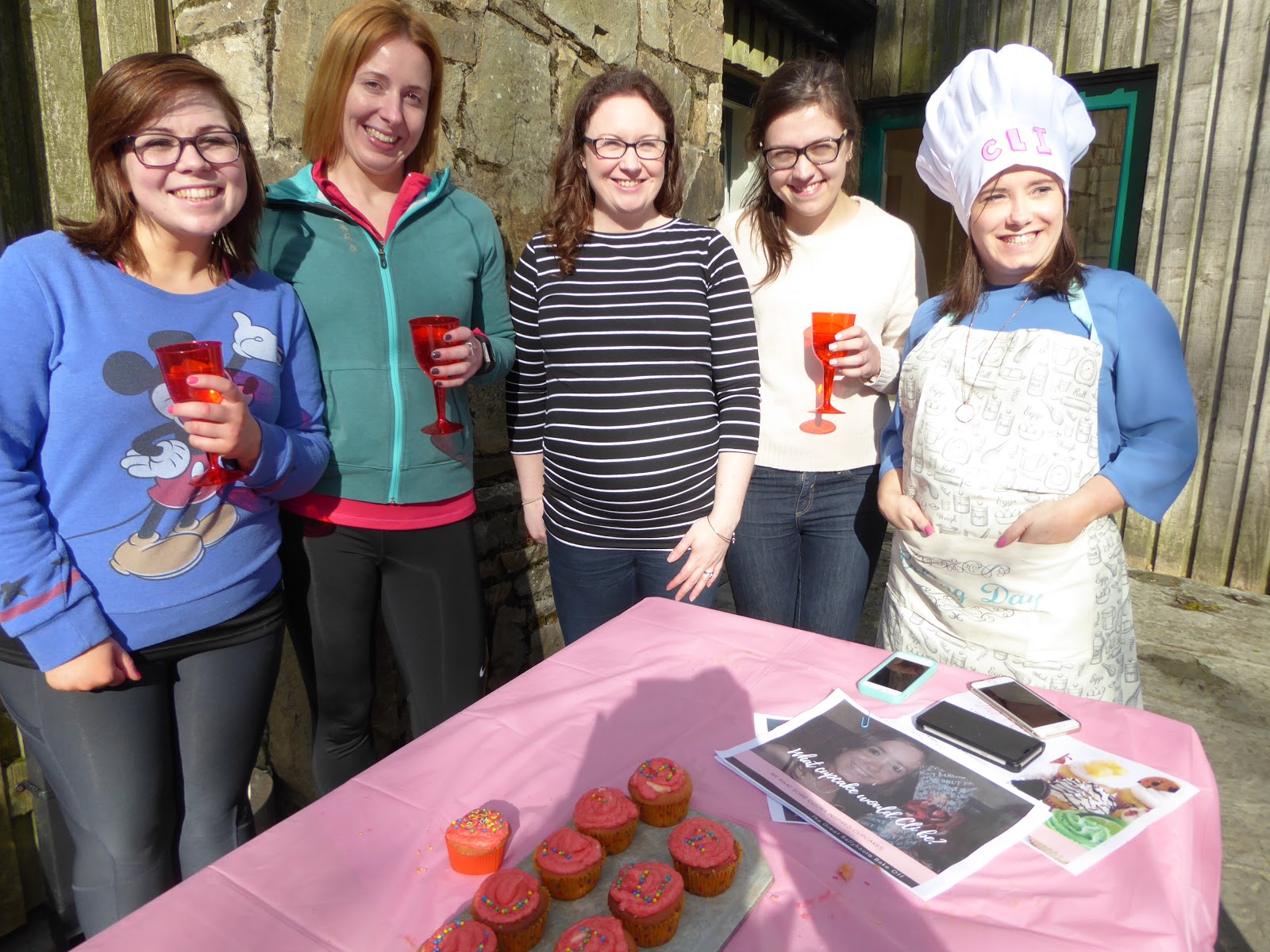 Washing up done and order
restored, the hens dolled themselves up for a night on the tiles in downtown
Kildorrery, famed in song and story;

“Have you ever been up to Kildorrery

Indeed if you haven’t that’s quare

Sure it’s only five miles from Ardpatrick

And three from the cross of Red Chair

And when at that cross you are landed

You will see a big hill looking down

And on top of that hill bare naked and chill 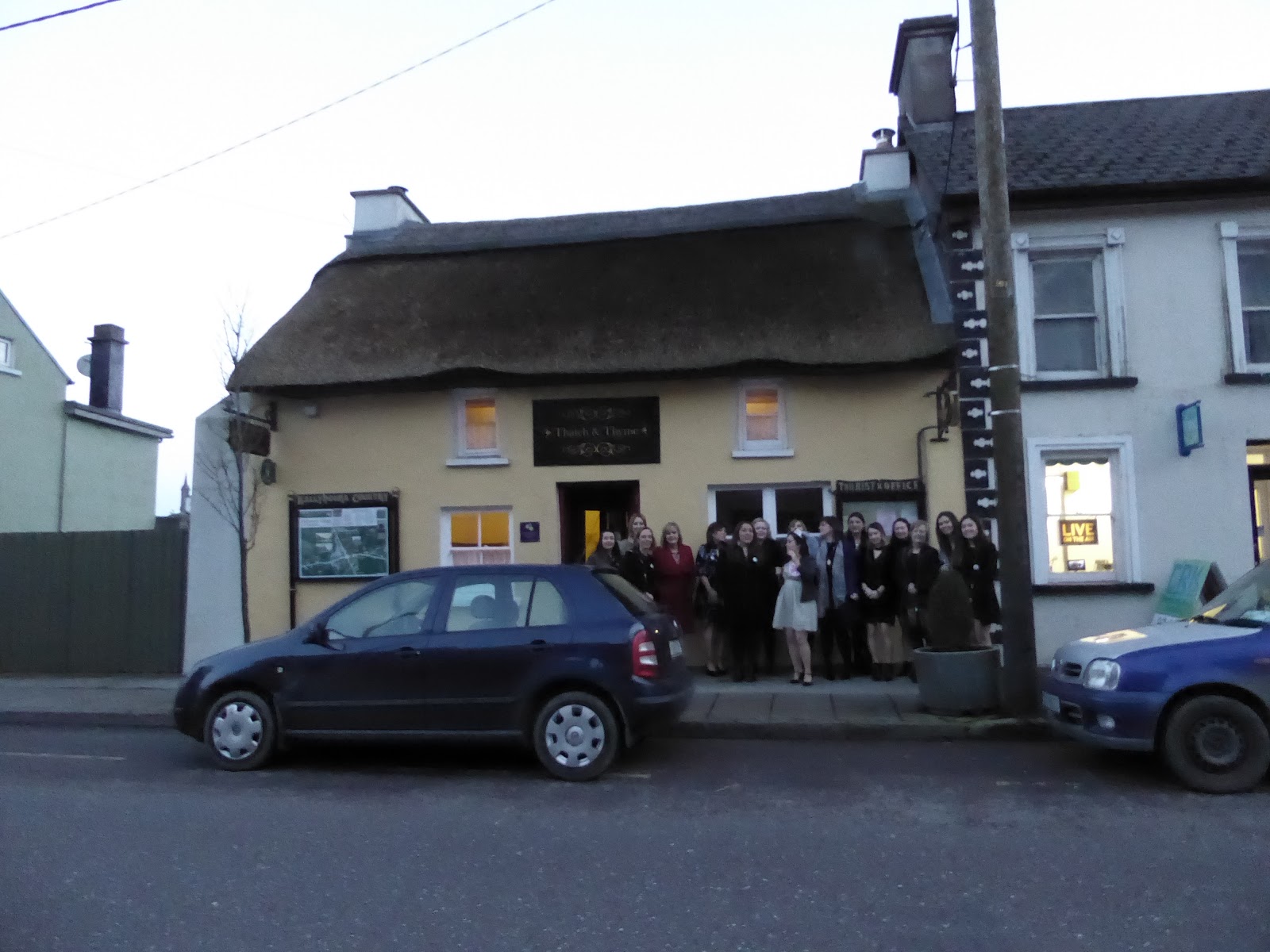 It’s a beautiful little
town with one of the best restaurants in Ireland. If you are travelling between
Cork and Dublin on the M8 it would be well worth your while to make your lunch
stop in Kildorrery. The Thatch and Thyme is worth travelling for.  Even the city based hens and the ladies who
travelled from abroad declared that it was one of the best meals they had had anywhere. 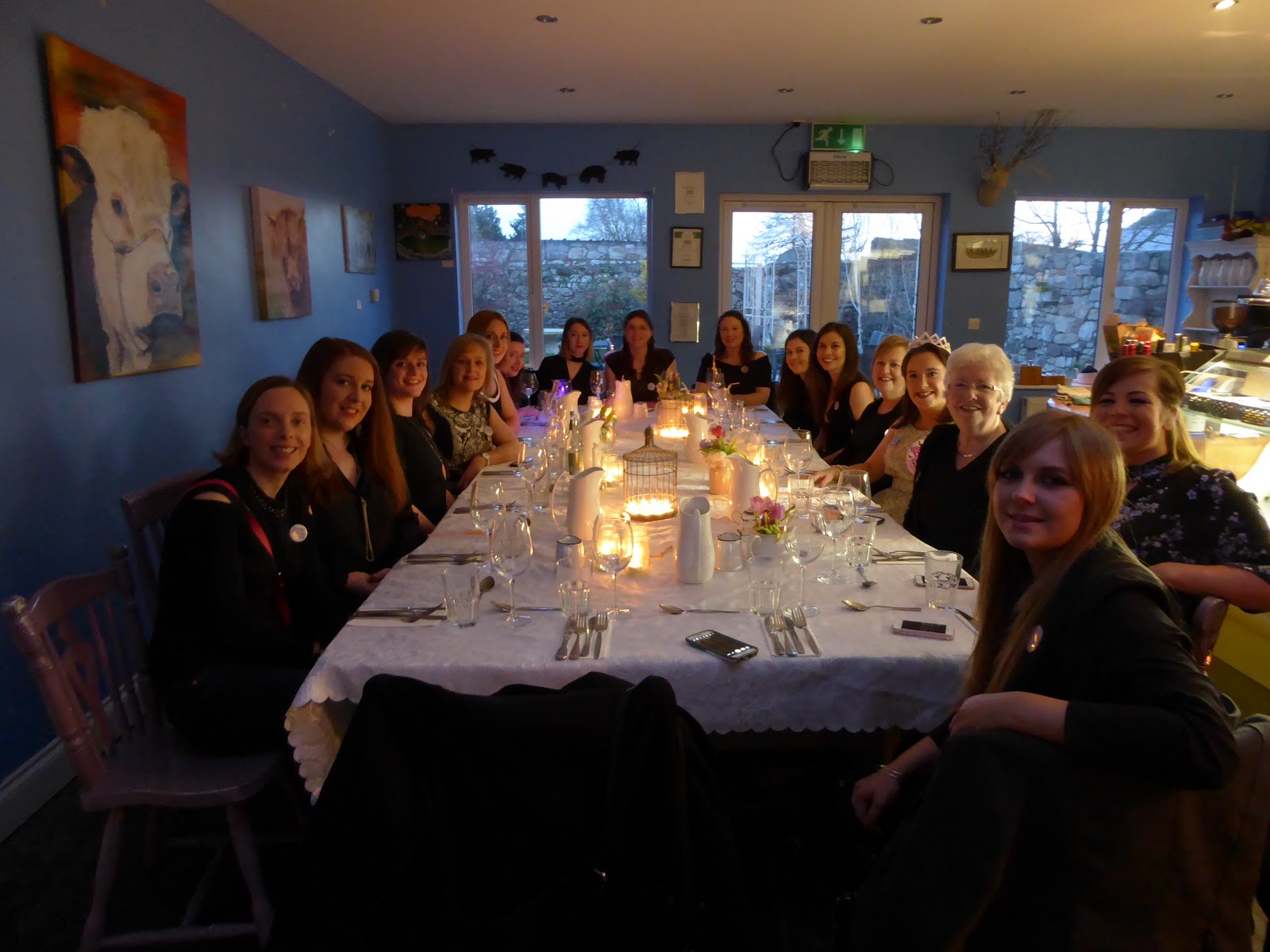 Down the road is Ollie’s
Bar where the hen party were the VIPs for the night. Those to whom these things
mattered declared that Ollie’s Bar in Kildorrery stocked a variety of gins, (including
Dingle gin) to rival the selection in any city bar. The bar also helped
organize the bus to bring us into town, they laid on music and they announced
to us when the nearby chipper was about to close and they allowed us to eat the
chips in the bar and to wait until our bus came back to collect us even though
the pub was now closed and the washing up done.

What happens on a hen
party stays on a hen party. I can tell you though that our musical entertainment on
the night was Darragh Lee from Youghal. He is a lovely young man and a great musician and singer. He is very tolerant
of numerous requests for songs not normally on his playlist. His claim to fame
is that he had two chairs turn for him on The Voice of Ireland. He made the
wrong choice of mentor but that’s a story for another day.

The hens joined by some
local folk did a conga down the street from one door of the bar to the other,
sampled the local McDonal delicacy of chips with cheese and curry sauce and
generally had a ball. I think we might
be still the talk of the village in Kildorrery. I hope they didn’t think all those verbal invitations to the wedding were genuine. 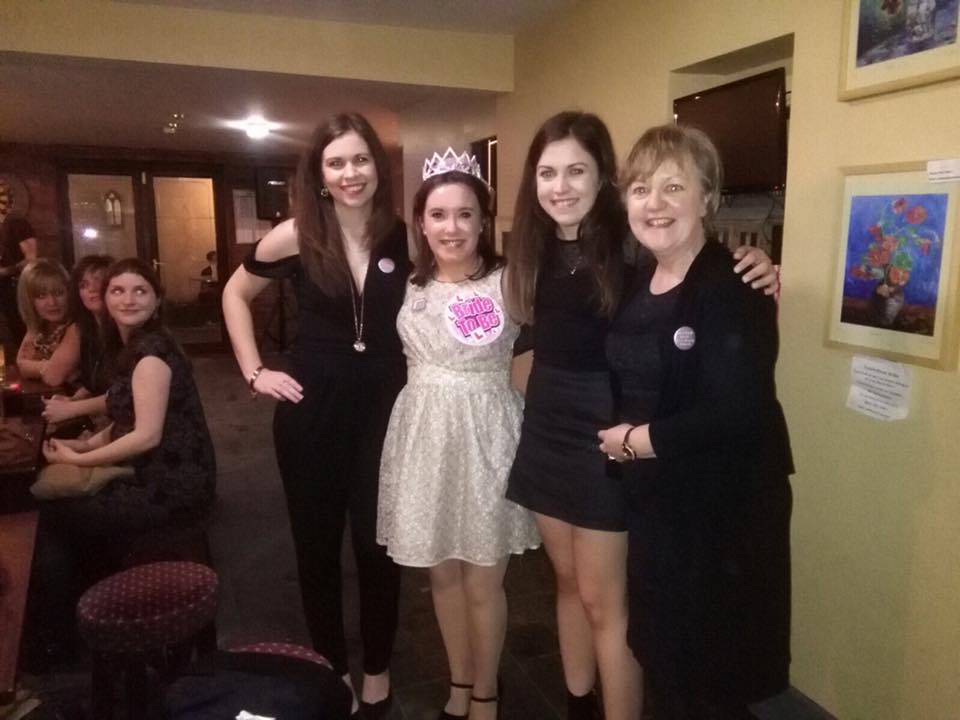 The new hen was welcomed into the coop by her lovely mother in law to be  and her soon to be sisters in law. 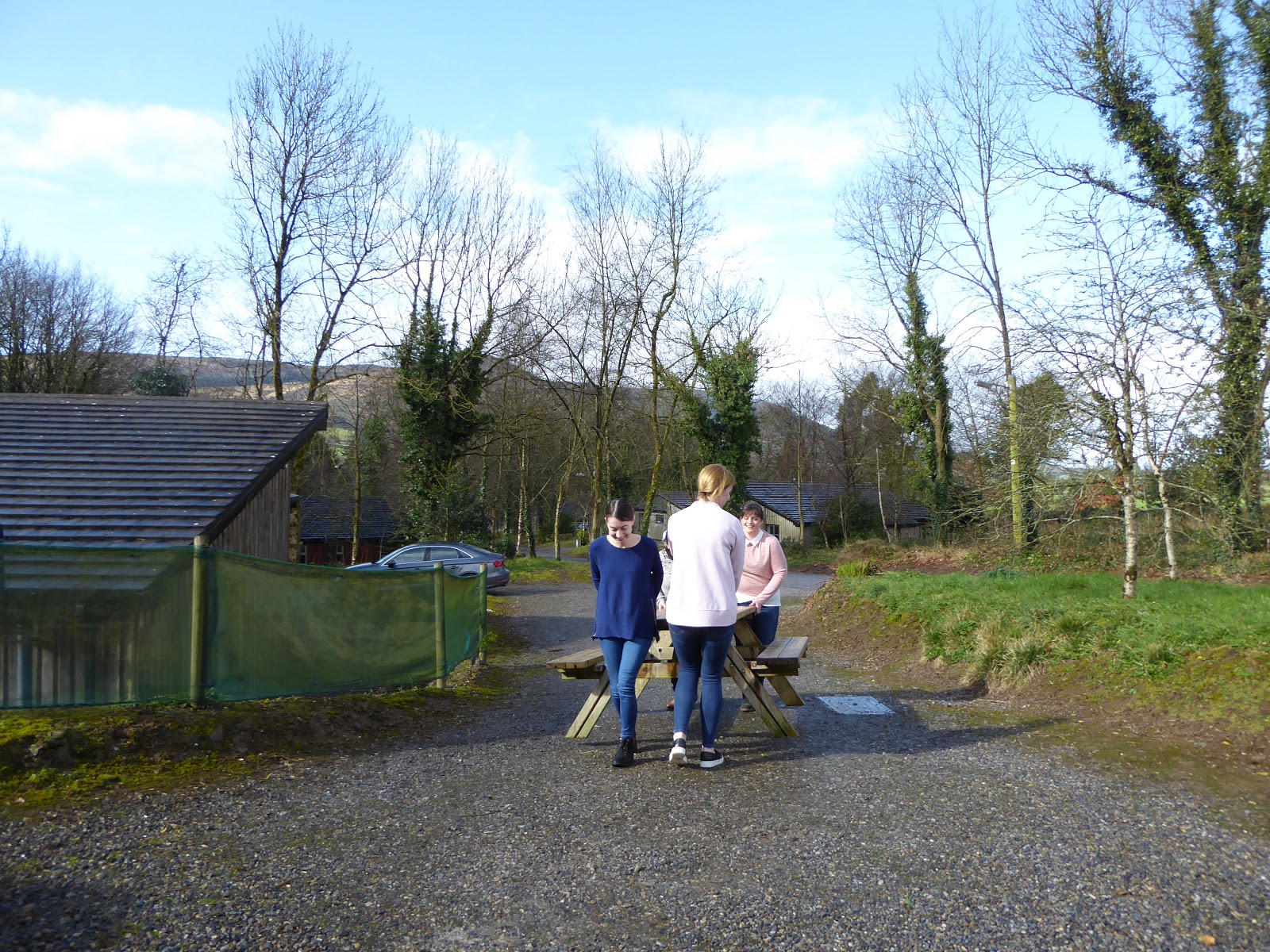 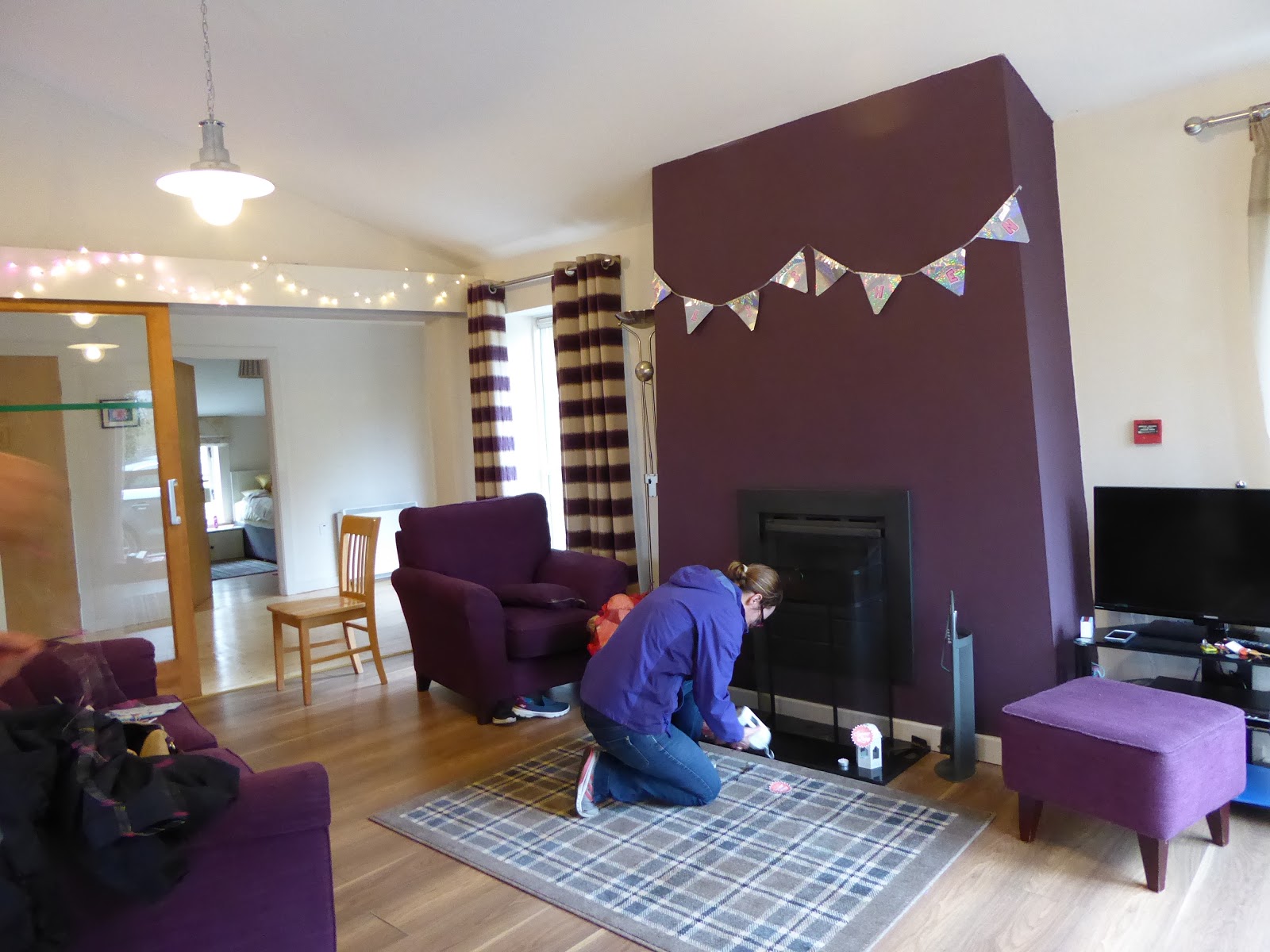 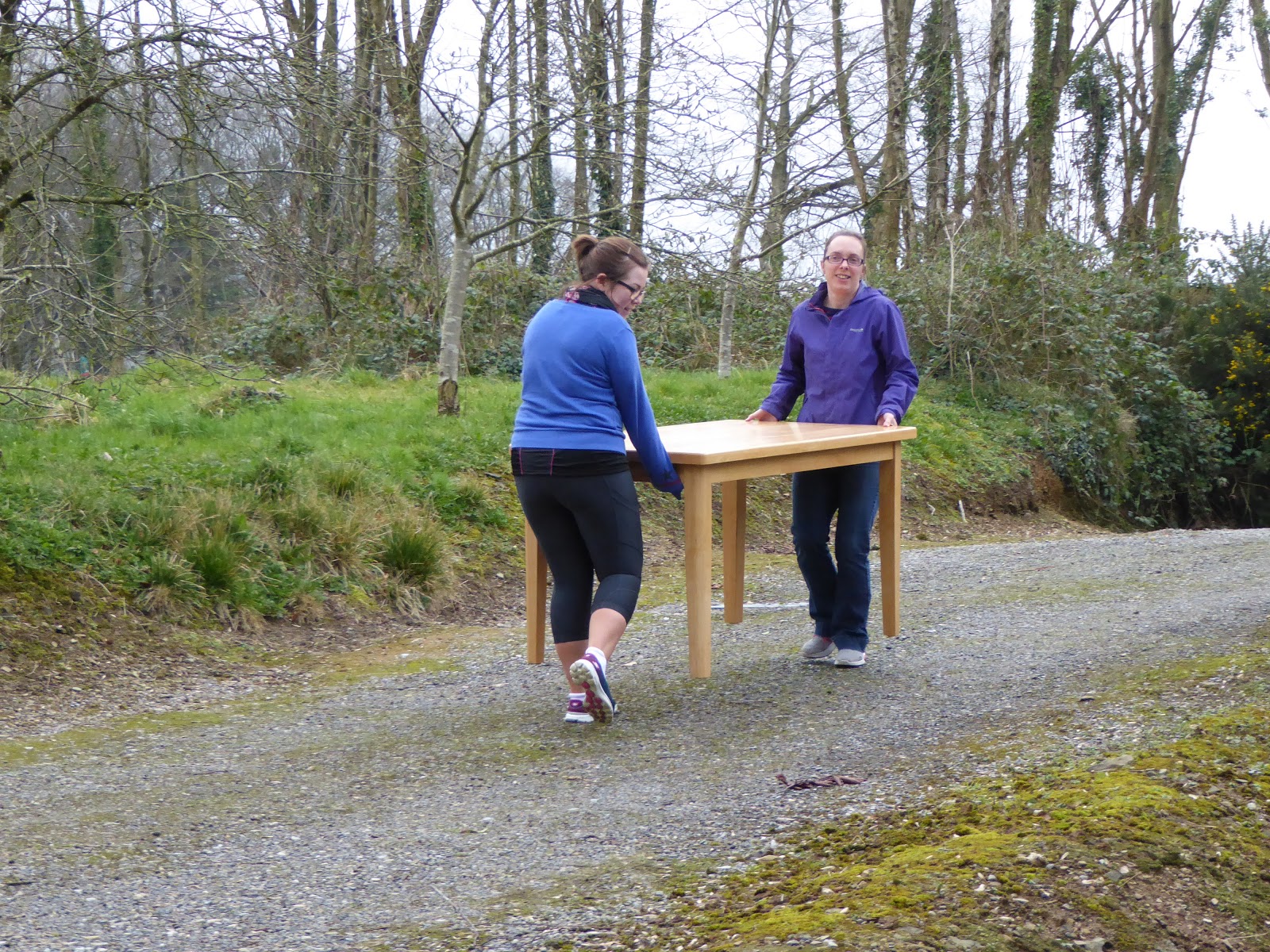 Back to reality on Sunday,
we tidied up, restored order and sadly left our mountain hideaway behind, vowing
to do it all again in Listowel in May. 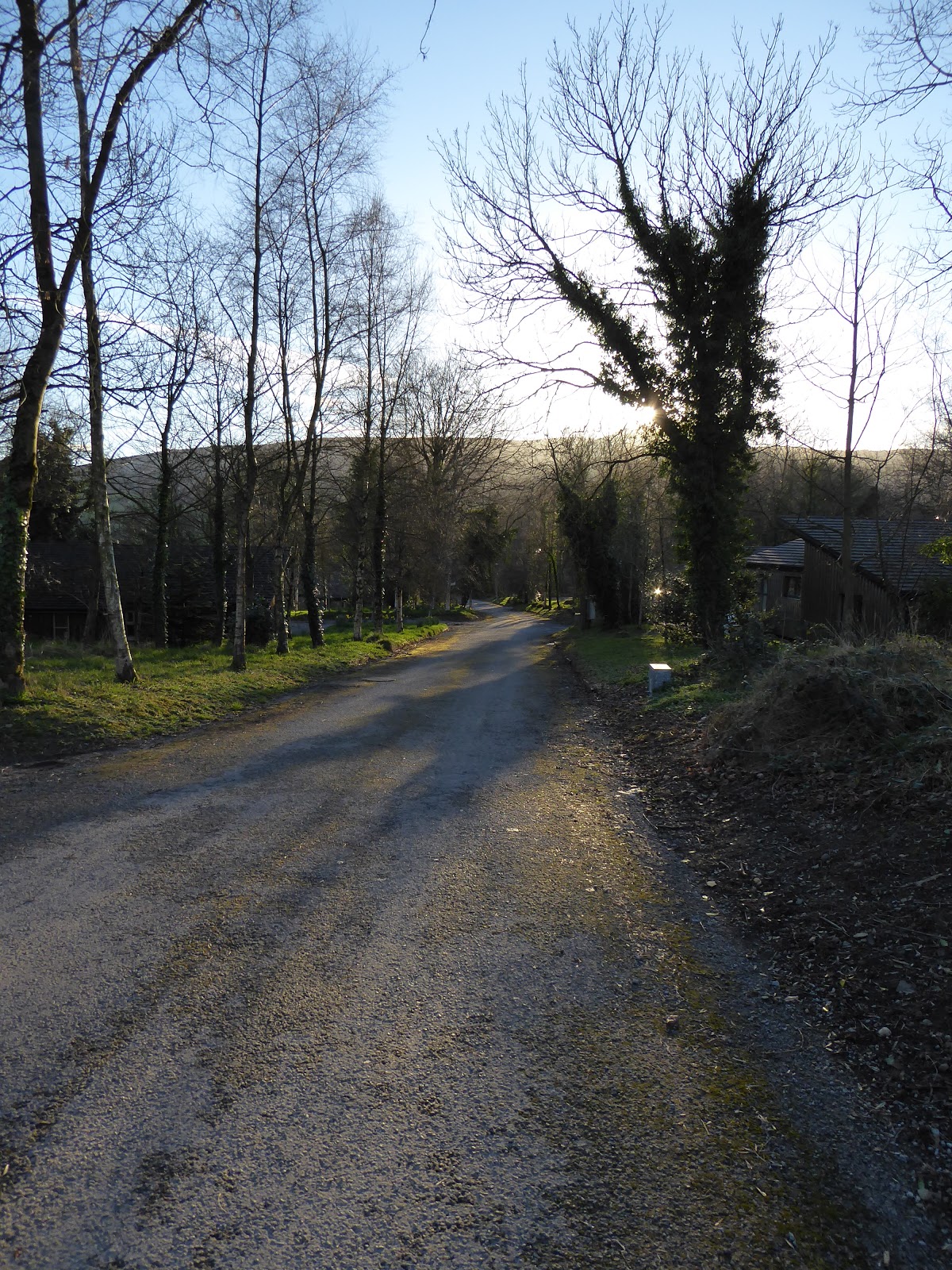