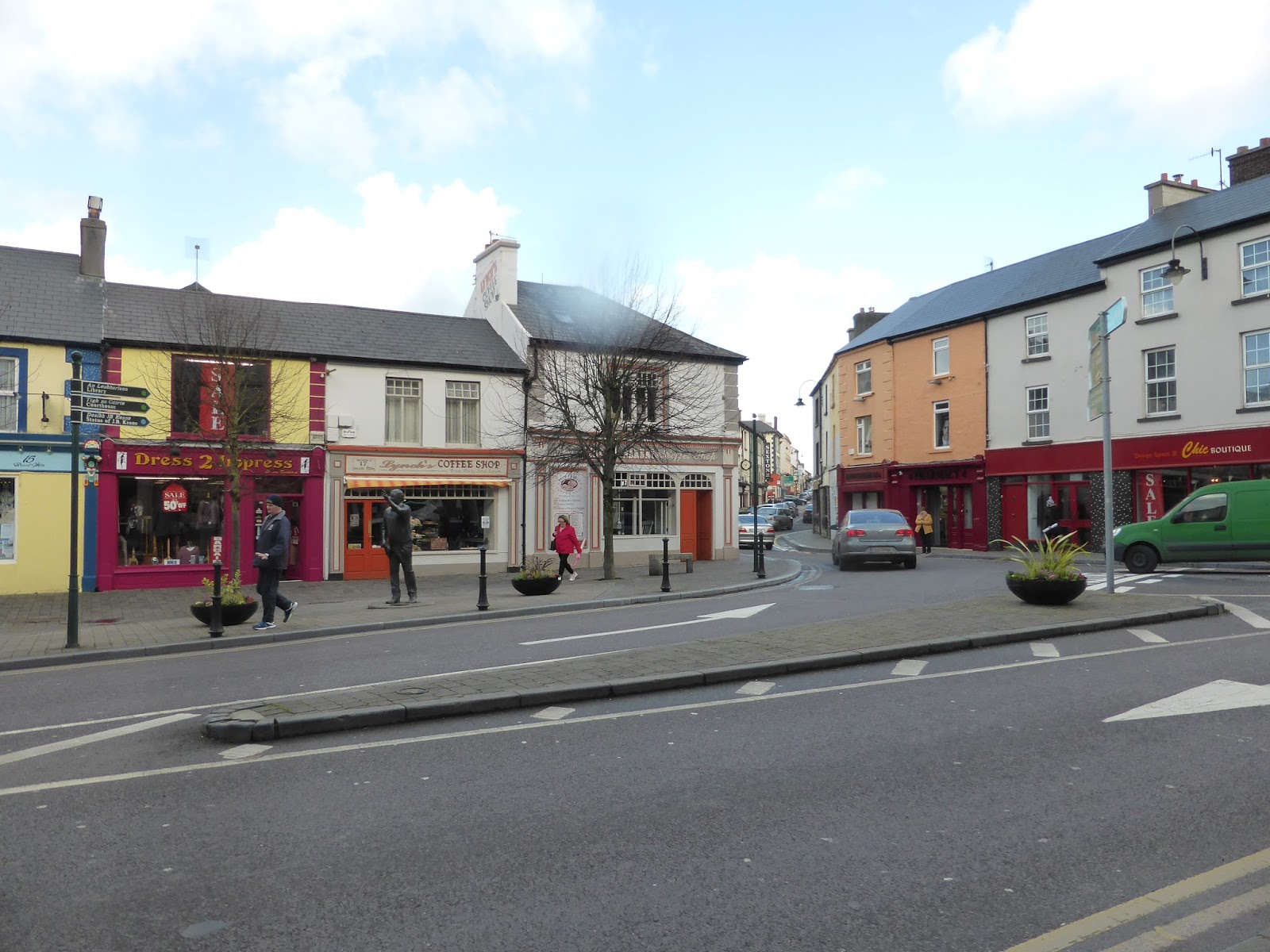 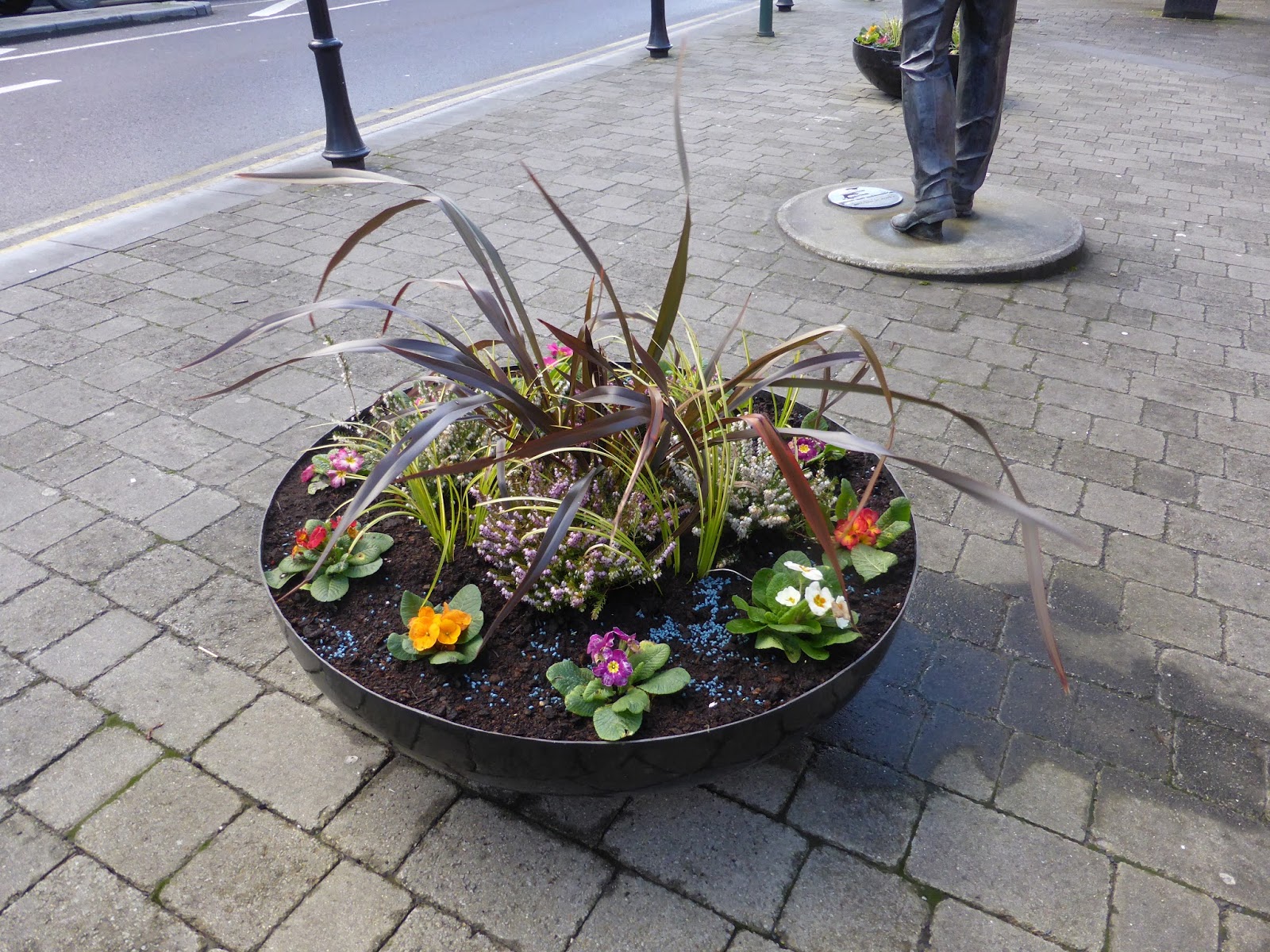 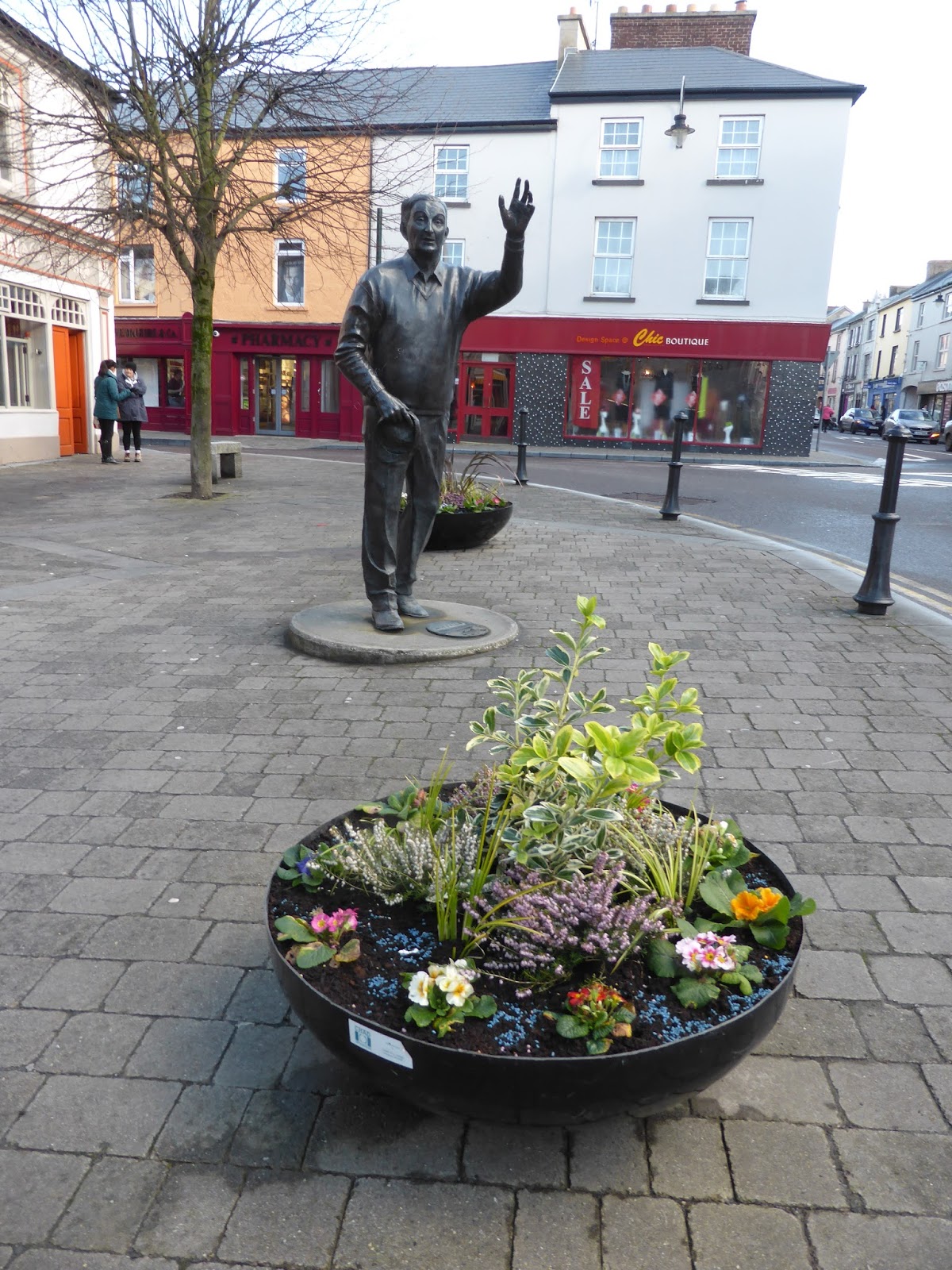 It lifts my heart to see the flower containers back on the streets after a bad winter….a welcome sight indeed.

Memories of a Different kind of Election Candidate 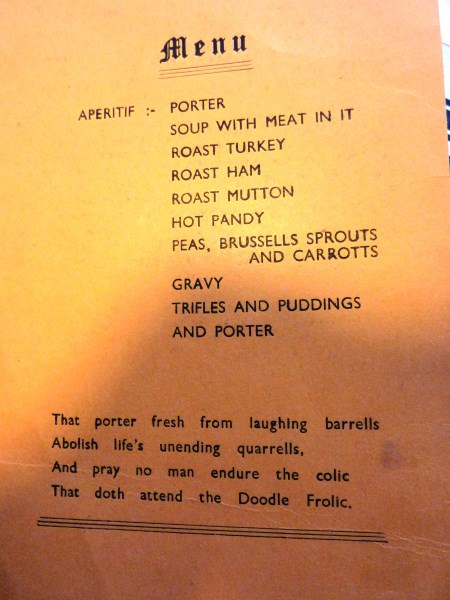 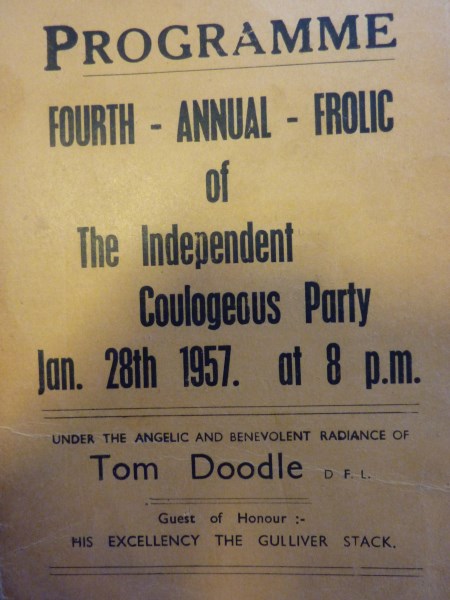 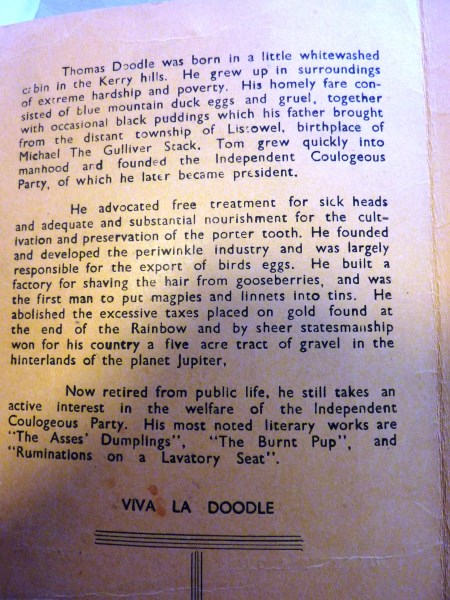 Tom Doodle was a fictitious character who stood for election in Listowel in the 1950s. So popular was he that when the jape was over John B. and his band of supporters continued to keep his memory alive with an annual “Frolic”. Junior Griffin has some of the souvenir menus from these frolics. Here is the first one for you. It gives a background picture of Doodle’s early life and the menu for the meal that was to be held in 1957 in his honour. 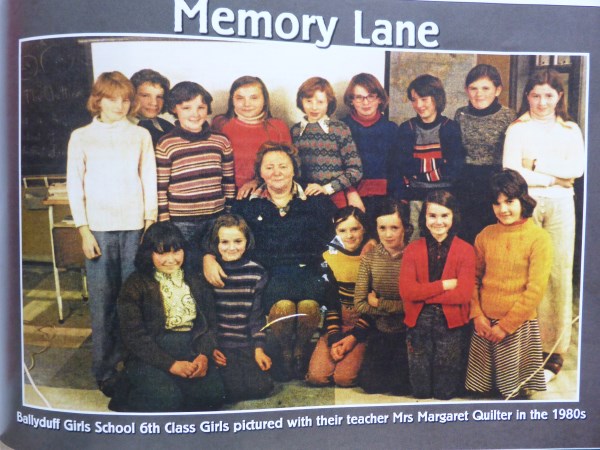 Oh the Days of the Kerry Dances… 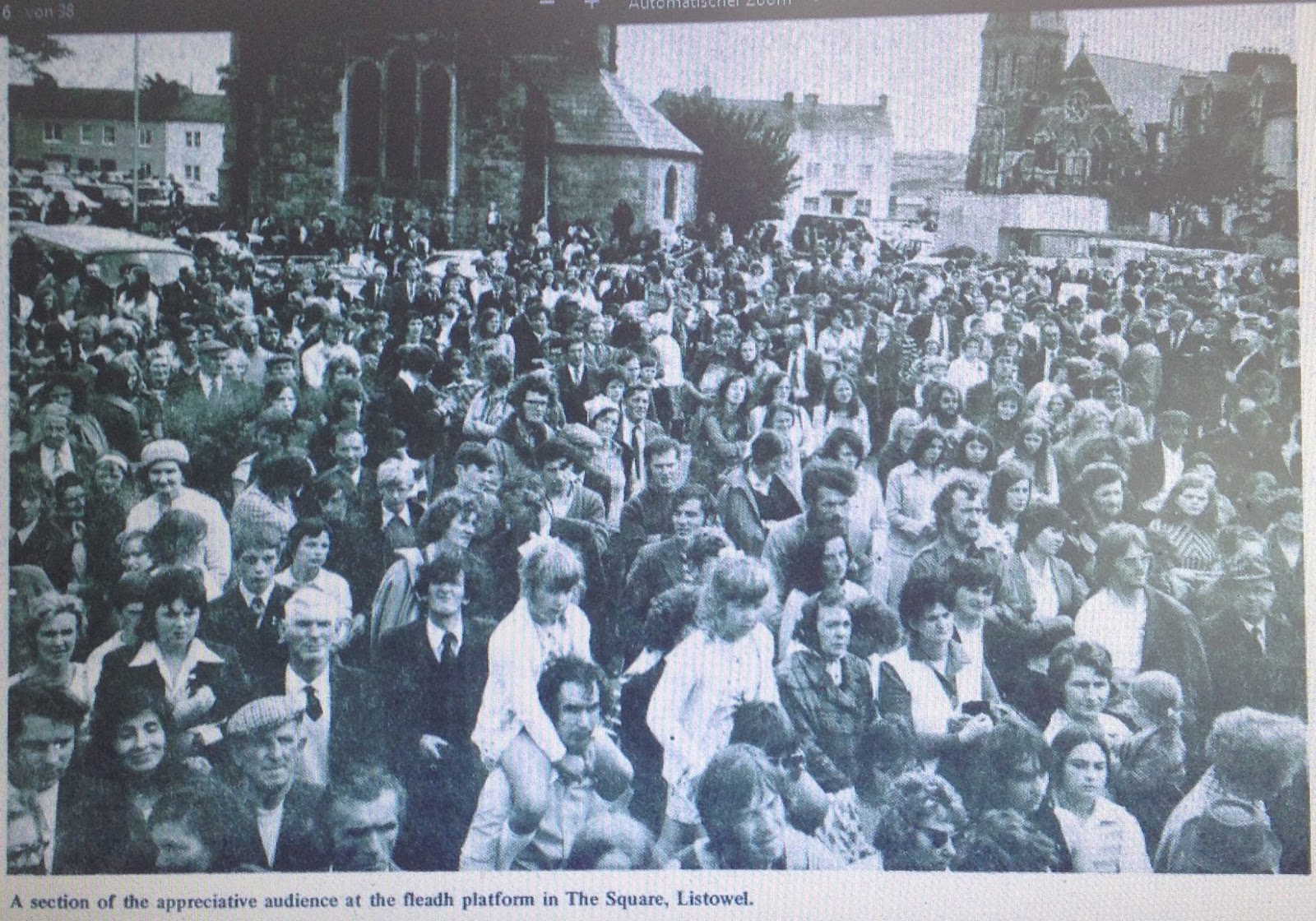 Liam OHainnín kept this cutting of a crowd gathered in The Square watching Jimmy Hickey’s dancers perform during a Fleadh Cheoil.

Out on The Biddy

St. Bridget’s Day was on Monday, February 1. Traditionally, the Biddy Boys started their rounds on St. Bridget’s eve and they went from house to house “mumming”, i.e. dressed in fabulous costumes and their faces disguised with straw hats, they welcomed spring with music, singing and dancing.

I was delighted to see a series of photos from that great photographer, Valerie O’Sullivan, which told me that the tradition is still alive. 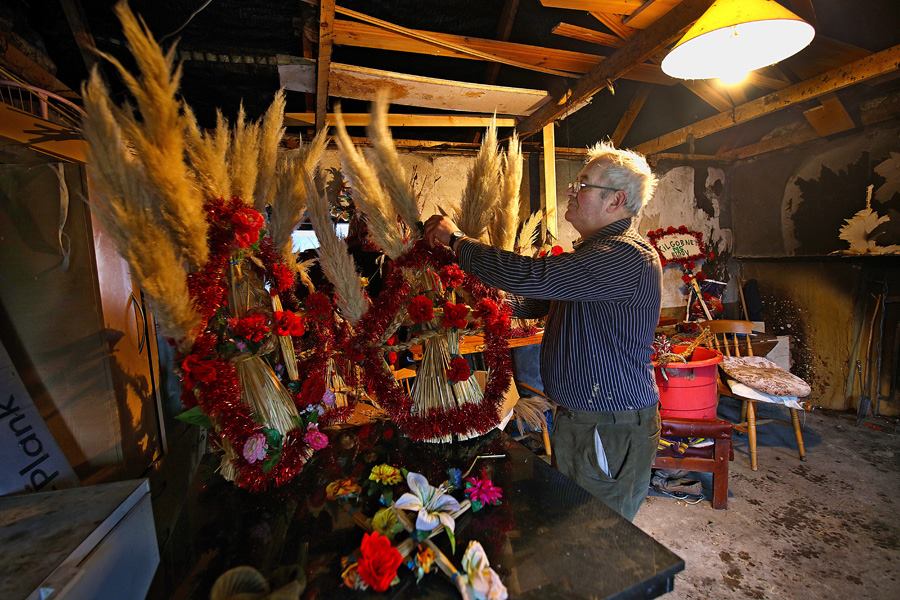 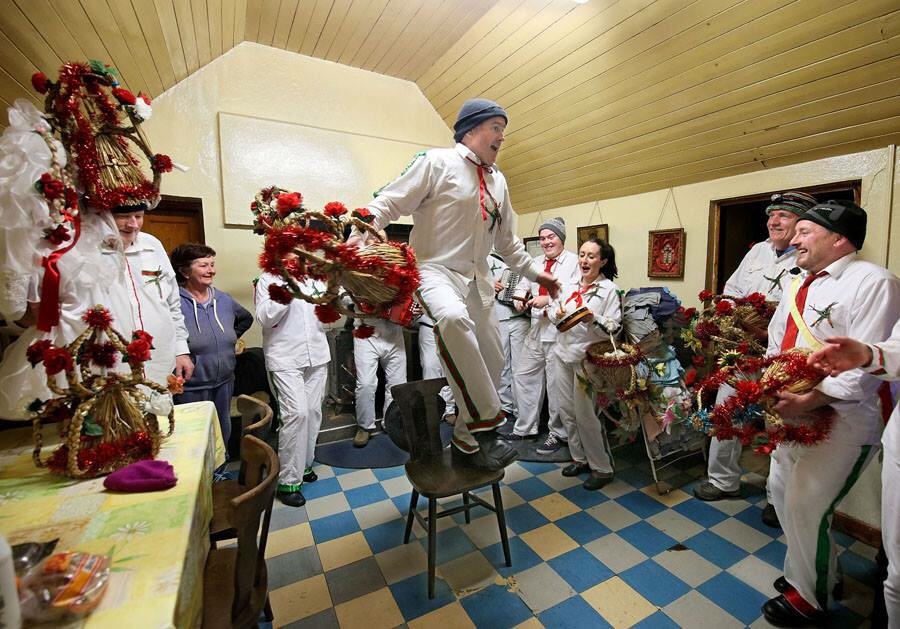 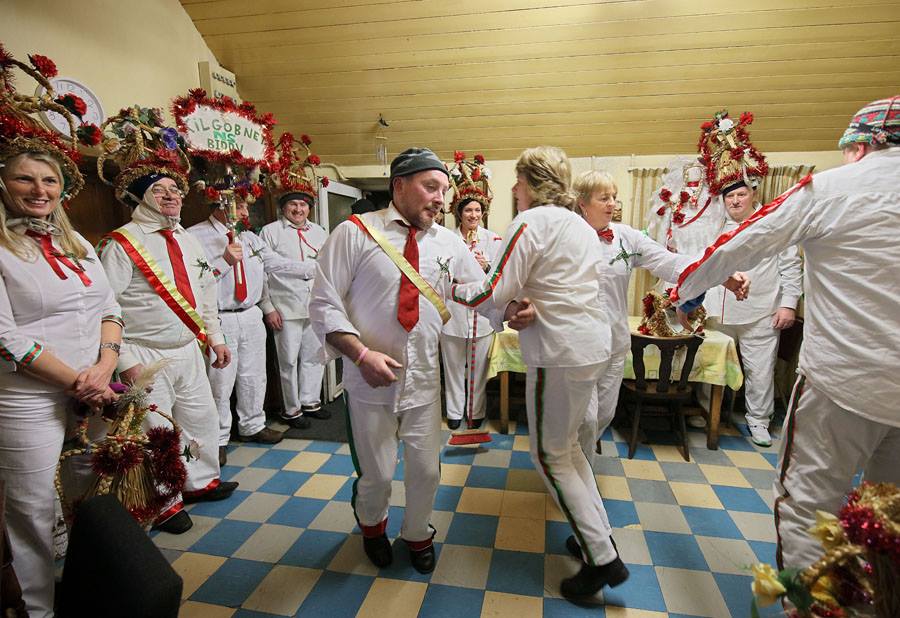 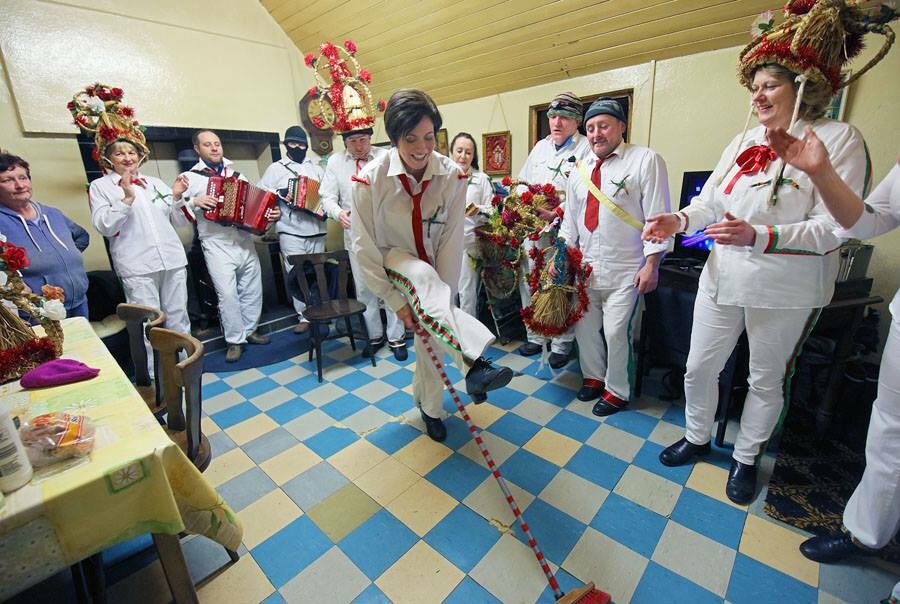 This is what Valerie wrote to accompany her photos;

Members of Kilgobnet Biddy Group, Beaufort, Co Kerry, calling to Mike McGillycuddy’s House in Shanera.The tradition of the Biddies is one of the oldest and most colourful customs in Ireland, a blend of pagan and christian pageantry, held on the 1st February each year. Heralding the beginning of Springtime and honouring St Bríd the patron saint of the farming community. The Kilgobnet Biddies well spend the next few nights calling to houses and halls playing music and collecting funds for Kilgobnet National School.

When I looked a bit closer at the photos,  there I saw, among the musicians, a familiar face from my days in Presentation Seconday School. Mr. Coffey was out on the Biddy to raise funds for his local school. The man pictured making the hats is his father. 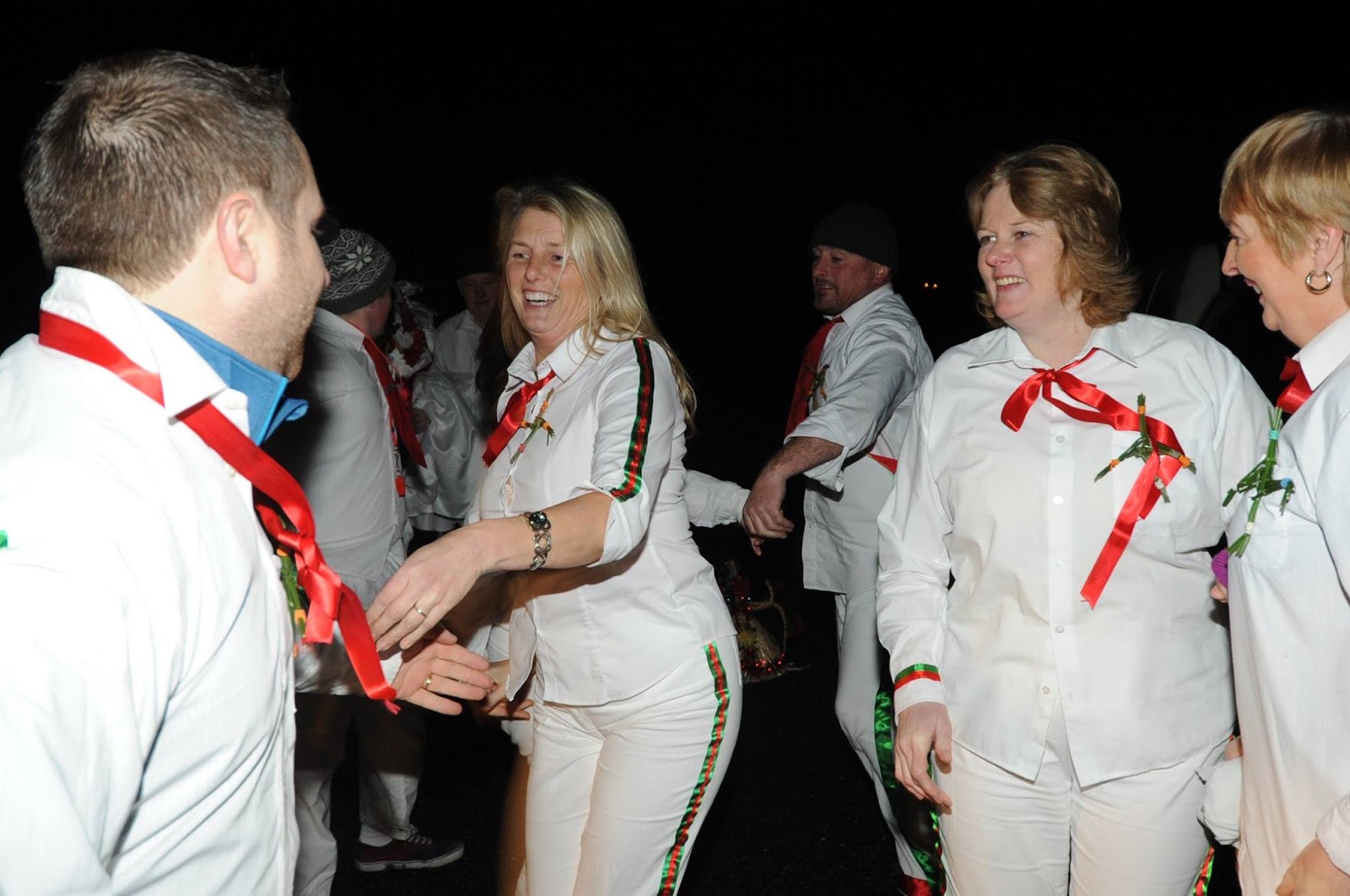 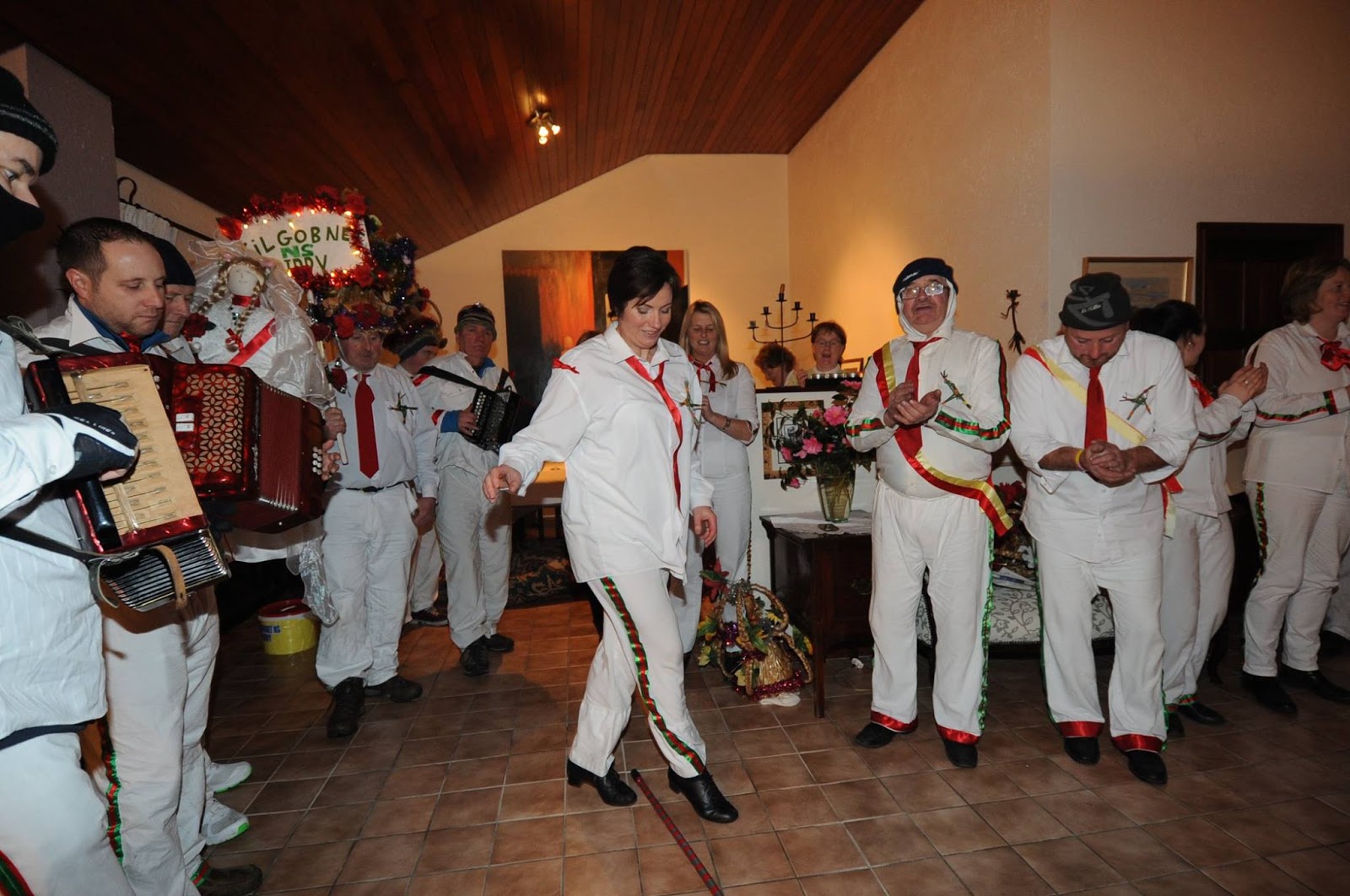 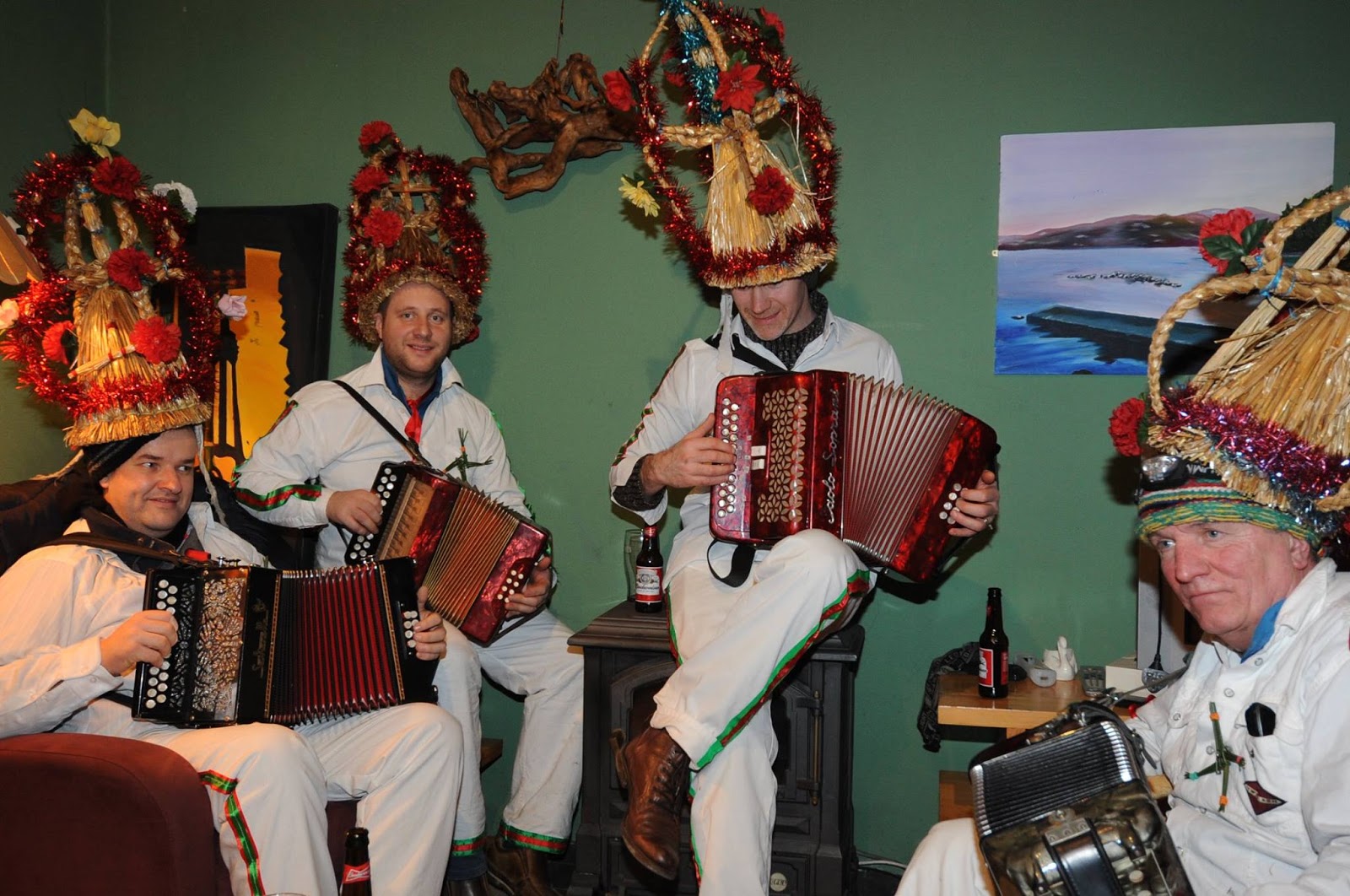 These three photos were taken by John O’Sullivan

Irish Abroad blog has this to say about this tradition;

In many of parts of Ireland ‘Biddy Boys’ (or girls) went from house to house with ‘Biddy’, an effigy of the saint, often a straw doll, collecting money and food for a party in her honour while reciting a rhyme similar to this one:

Here is Brigid dressed in white.
Give her a penny for this dark night.
She is deaf, she is dumb,
For God’s sake, give her some.”

Brian Coffey gave me an account of the Biddy in Beaufort. The tradition was always in the area with rival troupes of Biddy Boys doing the rounds of the houses and the pubs. In the 60s and 70s when it was at its height there was a competition among the Kerry Biddy groups with a plaque and a sum of money as a prize. The prize money as well as the donations collected in the pubs were always given to charity.

Four or five years ago when the tradition was waning, a group decided to revive it as a means of raising funds for the local primary school. It was decided as well as doing the pubs to go back to the old traditional way and to visit houses.

The Biddy costumes and straw hats are stored from year to year. Every year there is a need for one or two new ones or some old ones need a bit of smartening up with plaited straw or fresh tinsel.

A route is laid out and a troupe of about 20 local singers, musicians and dancers gathered. This year there were 3 troupes in Beaufort, the adults, the 6th class and the 5th class. Many houses had a candle lighting at the door to welcome the Biddy.  The leading man carried a sign announcing who they were. Often, when he knocked on the door he saw that the house was full of neighbours and friends gathered from far and near to welcome the Biddy. Chairs and sofas were moved back and a way cleared for the singing and dancing. Often a singer or musician in the house would join in and if there was room, they might dance a set ora waltz with the people off the house People were generous. Brian told me that it was not unusual to collect €100 in a house.

“It’s not only about the money,” said Brian. It brings the neighbours together in a spirit of community and friendship. On Monday night they called to the Community Centre where a card game was in progress. The cards were set aside as the card players welcomed the Biddy and the singing and dancing continued for a long time.

The night ended up, as per tradition, with a dance at the crossroads. The dancing area was lit by the headlights of several cars and the dancing and music continued into the small hours of the morning.

Take a look at this RTE video to see the craic they have in Kilgobnet on February 1st. Long may the tradition continue!