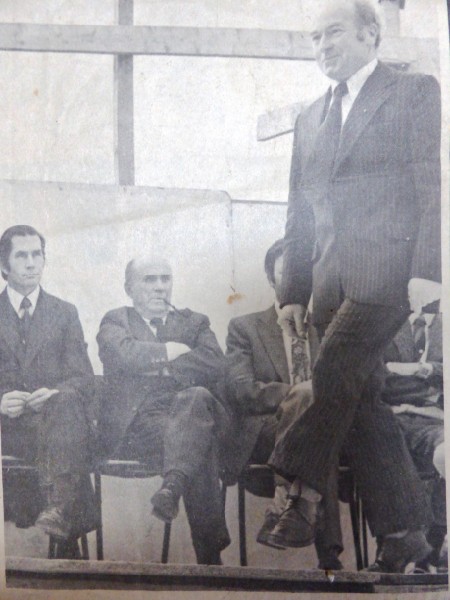 This photograph is probably the last one taken of the great
dancer, Liam Tarrant. In this picture he is dancing on a stage in Carrig in
west Kerry at a ceremony to mark the turning of the sod on the site of the
second Teach Siamsa. He passed away shortly after the photo was taken.

Dancing with him on that day was John MacCarthy of Listowel.

Liam was one of the driving forces behind Fr. Pat Ahern’s
venture of a national folk theatre, Siamsa Tíre. From the start Siamsa had national
backing but in its early years and still
to this day it was very much rooted in
Kerry. The first Teach Siamsa was built in Finuge and Siamsóirí ns Ríochta was
formed. This was a troupe dedicated to  the “theatrical reenactment of the
occupational music, song and dance of the Irish countryside”

Liam Tarrant learned his steps from the great North Kerry
dancing master, Jerry Molyneaux. The crowd in Carrig that Sunday in October
1974 were privileged to witness the last stepdance of one of the great
exponents of the Jerry Molyneaux style of dancing.

A short year after Jerry was laid to rest in Gale cemetery,
Liam Tarrant was buried in Rath, in a ceremony Seamus Wilmot described as “a
funeral fit for a king.”

The hearse was flanked to the cemetery by Siamsóirí na
Ríochta and members of Comhaltas Ceotóirí Eireann. At the graveside, Liam’s
great friend, Fr. Pat Ahern played Slán le Cheoil and An Ghaoth Aneas on a
fiddle he played on so often to accompany Liam’s dancing.

Bryan MacMahon gave the graveside oration and the
blacksmith’s son from Glin , who died doing what he loved best , was mourned by
family and friends and by everyone who loved the dance. 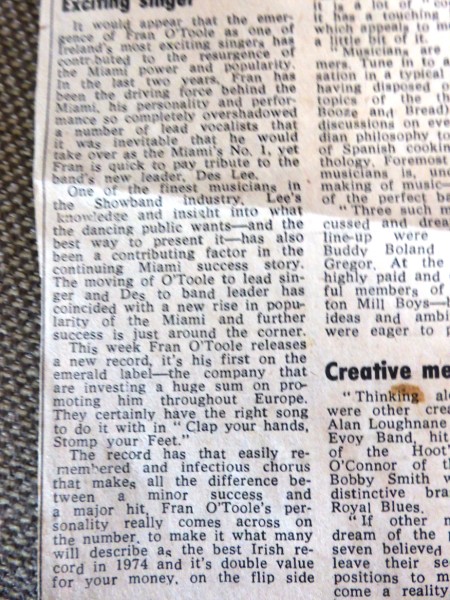 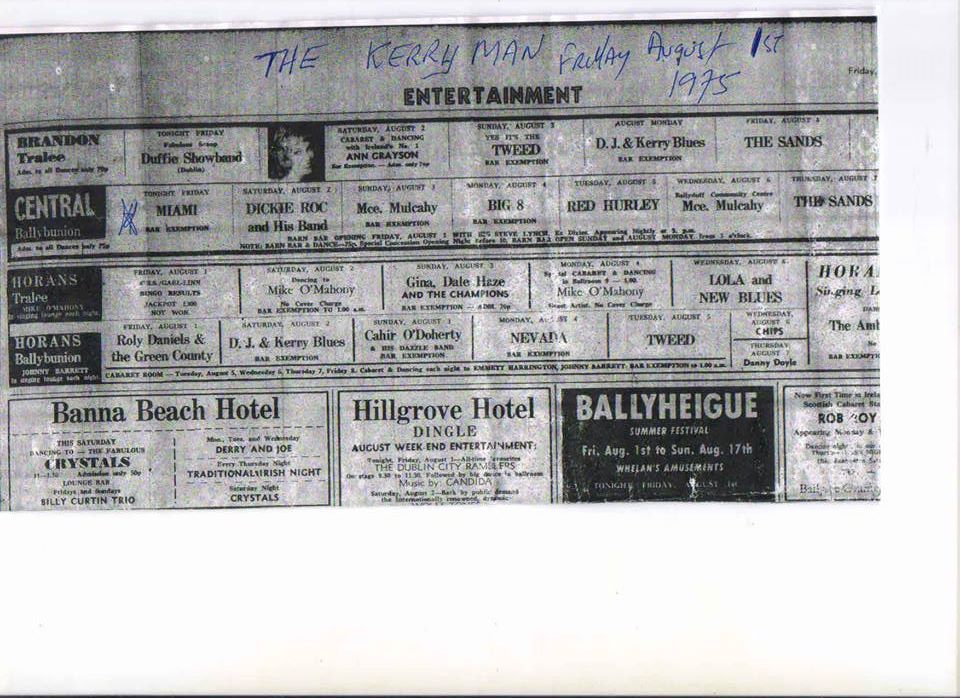 “As you can see the Miami show
band were booked to play in the Central Ballroom Ballybunion on the Friday the
first of August 1975 and we all know what happened the night before. (sorry
about the poor quality) and thanks to Noel o Connor from Ballyduff Co. Kerry
for giving me the paper cutting.   Jim
Halpin”

The “what happened the night before” Jim refers to is that 3 of the band members, including Fran O’Toole were killed in a terrorist ambush as they returned from a gig north of the border. The Miami Showband was one of Ireland’s leading bands at the time and included in its  line up men from Northern Ireland and from the Republic.

They were a soft  target for the UVF whose plans to set the band up as IRA supporters carrying guns across the border went horribly wrong. The bomb the UVF was planting in their van as they detained them at a fake road block went off prematurely killing 2 of the terrorists and three band members and traumatizing and injuring the others.

The Miami Massacre was one of the worst atrocities of a bloody vicious campaign in Northern Ireland by UVF and IRA militants. 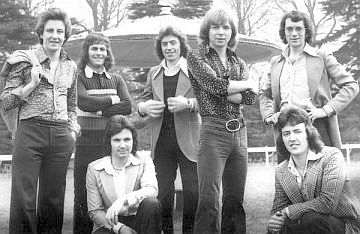 The Miami in 1984. Fran O’Toole is standing second from right.

The Day the Music Died 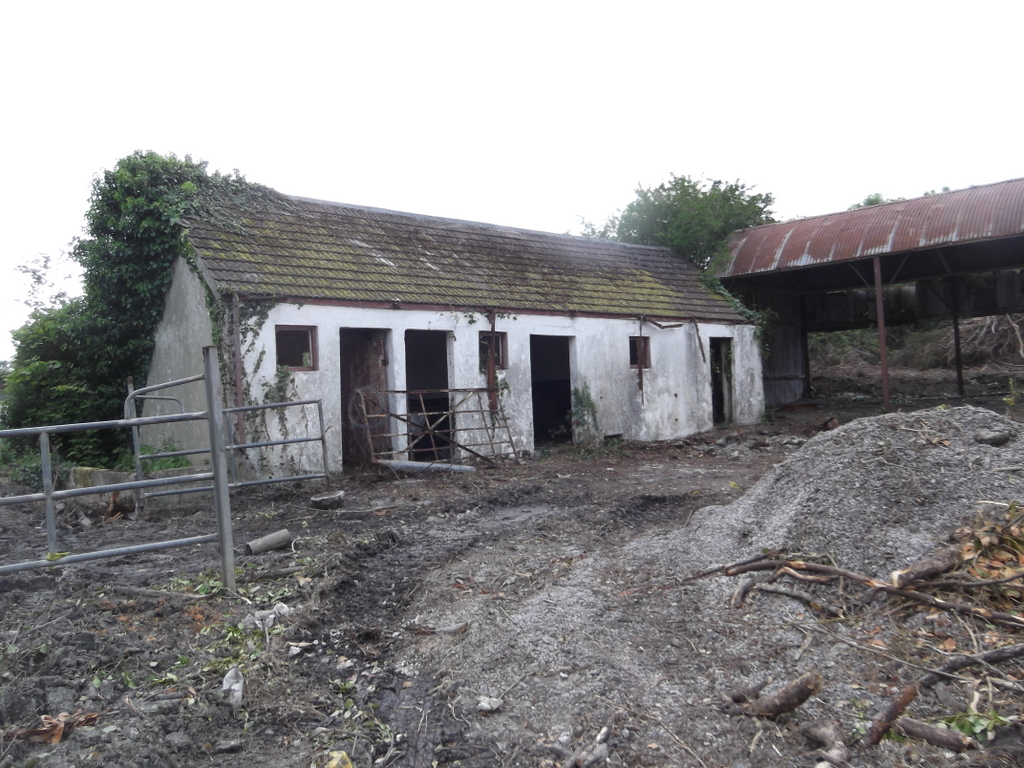 An old house is being refurbished at Skeheneran. These interesting old outhouses and barn are now visible from the road. 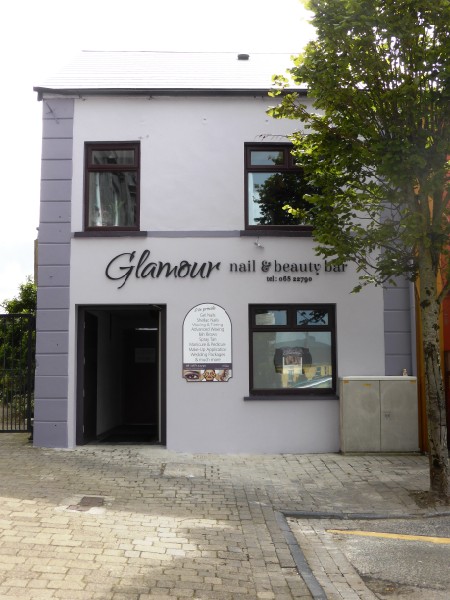 New shop in The Square 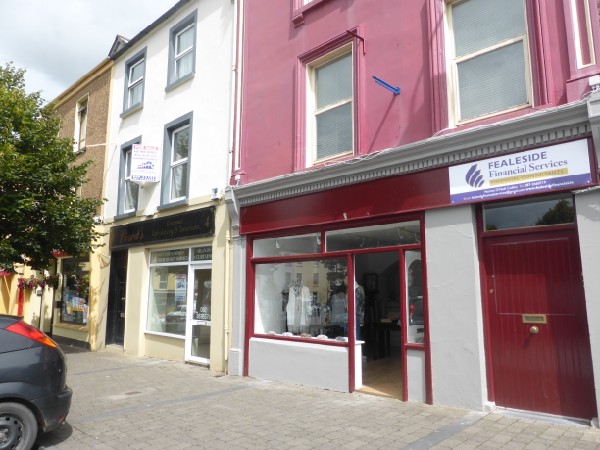 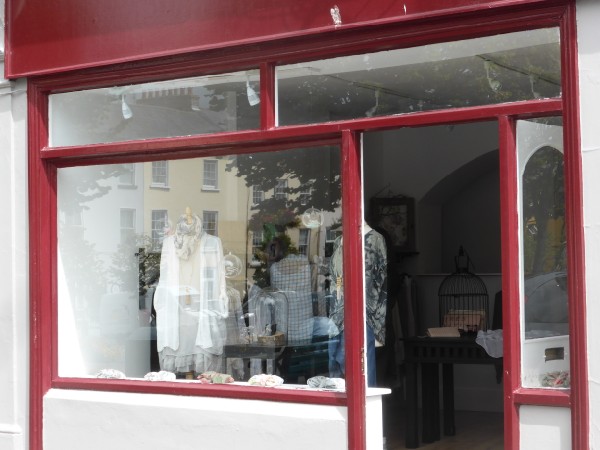 I took the photo of this new dress shop on the day it opened, August 1 2015. It didn’t have a name. Maybe it has now.