Ballybunion, Hollymount, Listowel Then and Now and haymaking in Bromore 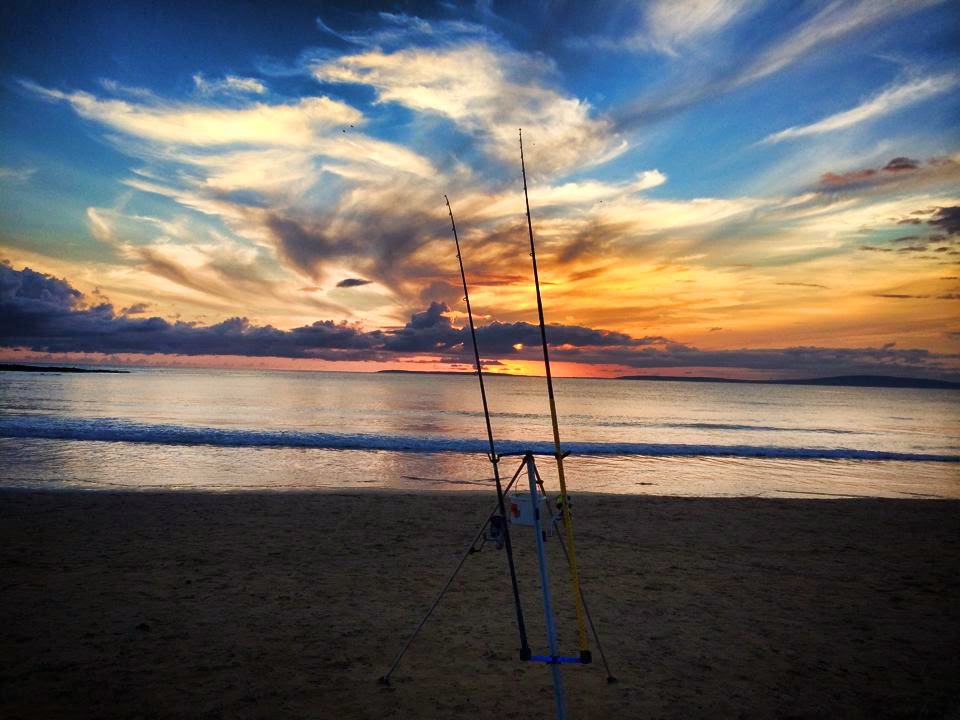 A Ballybunion vista as captured by Mike Enright, sea angler. 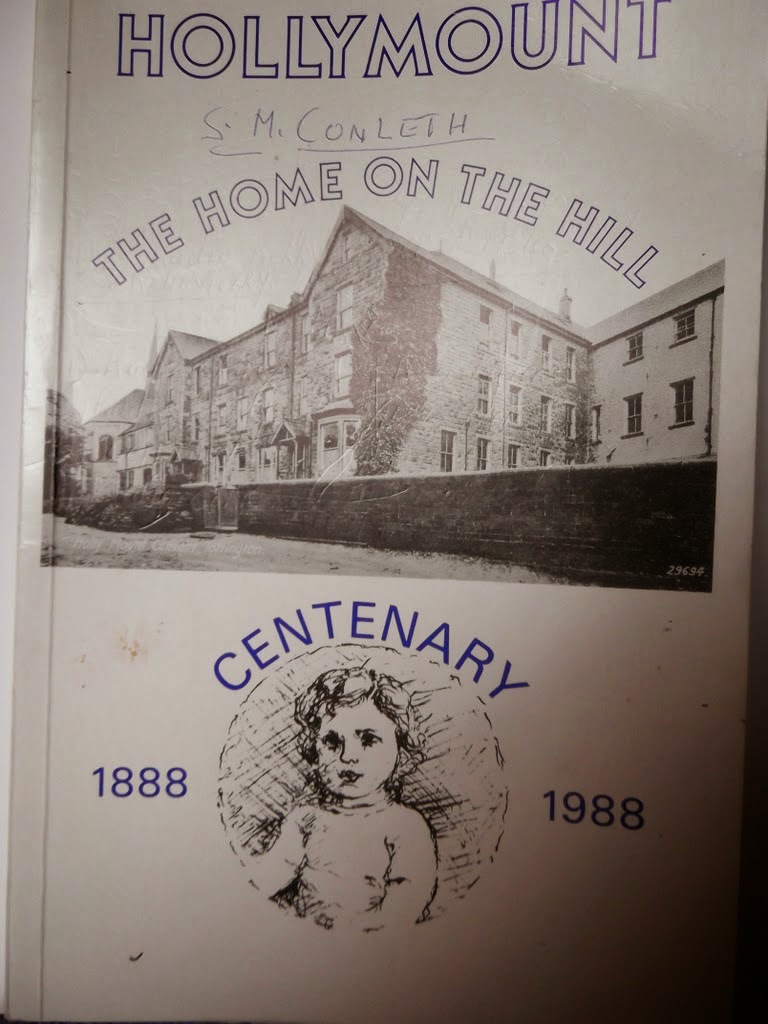 Do you remember this from last week? I thought it was a fairly long shot that anyone would know any of these sisters. How wrong I was.

I got the following email from Kay Caball;

“…I know who wrote that book about the Hollymount Centenary. She was Sr. Brigid Moloney from Lyreacrompane a first cousin of my fathers’.  She and her sister Bessie joined this order and they spent all their working lives in Letchworth.  A number of other young girls from the same area joined the order also.  I know that Mary Rose Gleeson from Lyreacrompane joined and I notice the name Geaney on the photo.  This branch of the Moloney were cousins of the Geaneys (from Castleisland) so I presume Eilish Geaney  was another postulant as they were called then.
Re Brigid, when she retired,  came back to the Irish house – Moore Abbey  in Monasterevin which had previously been the home of John McCormack and we visited her there. As far as I know, she was instrumental in  establishing  the Gerard Manley Hopkins Summer School there, it is now called the Gerard Manley Hopkins International Literary Festival now and takes place in Newbridge College. She died in 2010, as far as I know her sister Bessie is still alive in one of their UK homes.
She had written a number of articles for the Lyreacrompane Journal over the years with great reminisces of her youth there.

MOLONEY Sr. Brigid – December 26, 2010 (peacefully) at Moore Abbey Convent Monasterevin and of Kerry. Deeply regretted by her loving sister Bessie (Sr. Elizabeth), her community of Sisters of Charity of Jesus and Mary, the Moloney, Carey, and Nolan families and many friends. May she rest in peace. Requiem Mass today (Tuesday) December 28, at 12 noon in The Convent Chapel, burial afterwards at St Evin’s Cemetery, Monasterevin   [Irish Times 28 Dec 2010].”

Another source informs me that there were at least two Listowel girls in that convent. Eleanor Stokes of Charles Street and Joan O’Connell joined that order and went to Hollymount. Could they be the “aspirants” in the photograph?

Find Your Kerry Ancestors has this to say about post civil war Ireland.

County Kerry Claims for compensation for loss of or damage to property that occurred as a result of military action between July 1921 and March 1923, under the Damage to Property (Compensation) Act, 1923 are now available  at the National Archives.   I have been going through them and publish here a selection to give you a flavour of life post the Civil War

Nothing was sacred – heifers, cars, boats, motorcyles, suits (6), food, alcohol, ‘drapery goods’ – you name it.  While the major portion of the blame is attributed to the ‘Irregulars’, the National Army were blamed for an amount of damage also, and the more discreet applicant blamed ‘unknown persons’.

Here are a few examples;

Claims for compensation for
loss of or damage to property that occurred as a result of military action
between July 1921 and March 1923, under the Damage to Property (Compensation)
Act, 1923 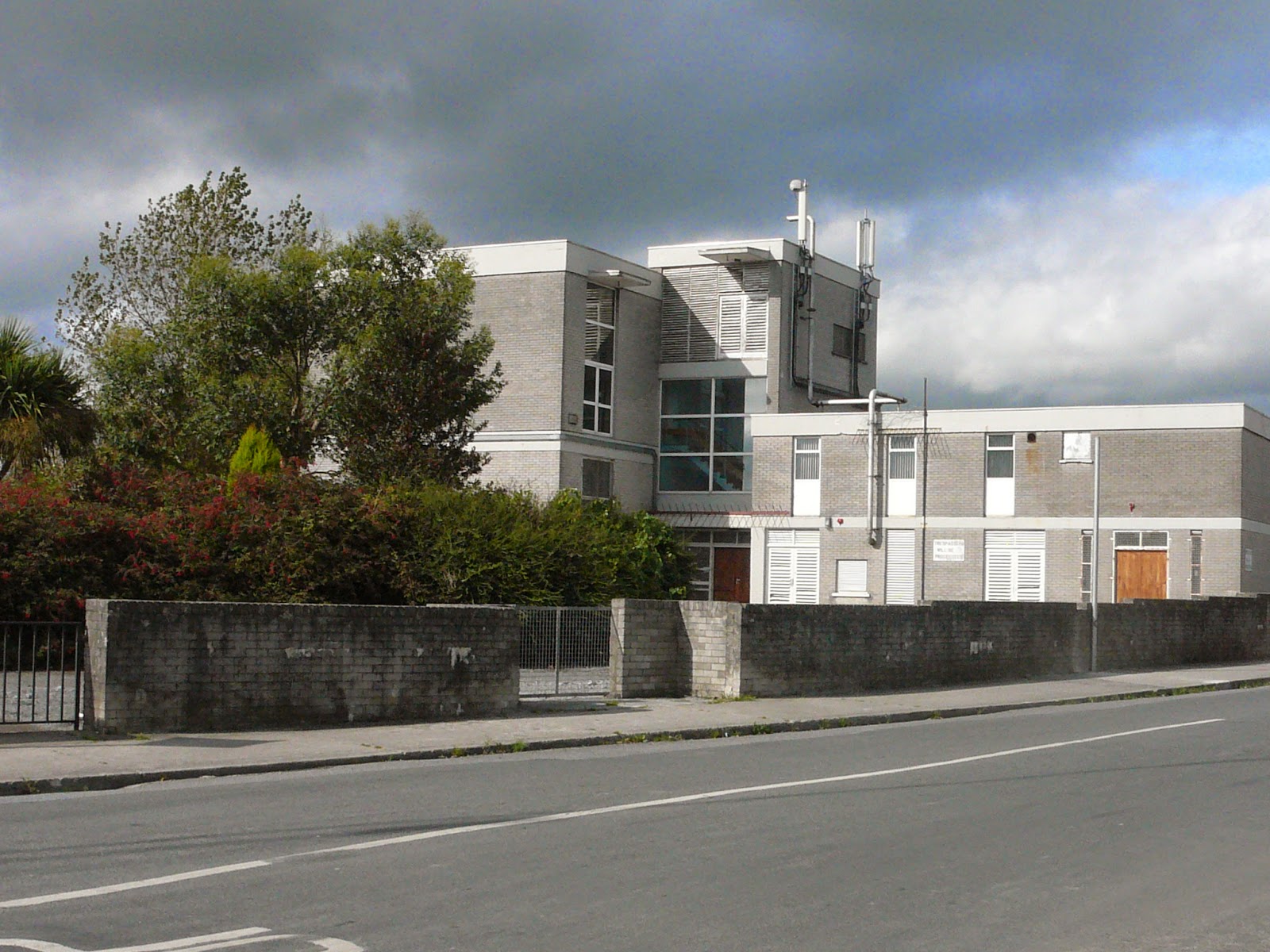 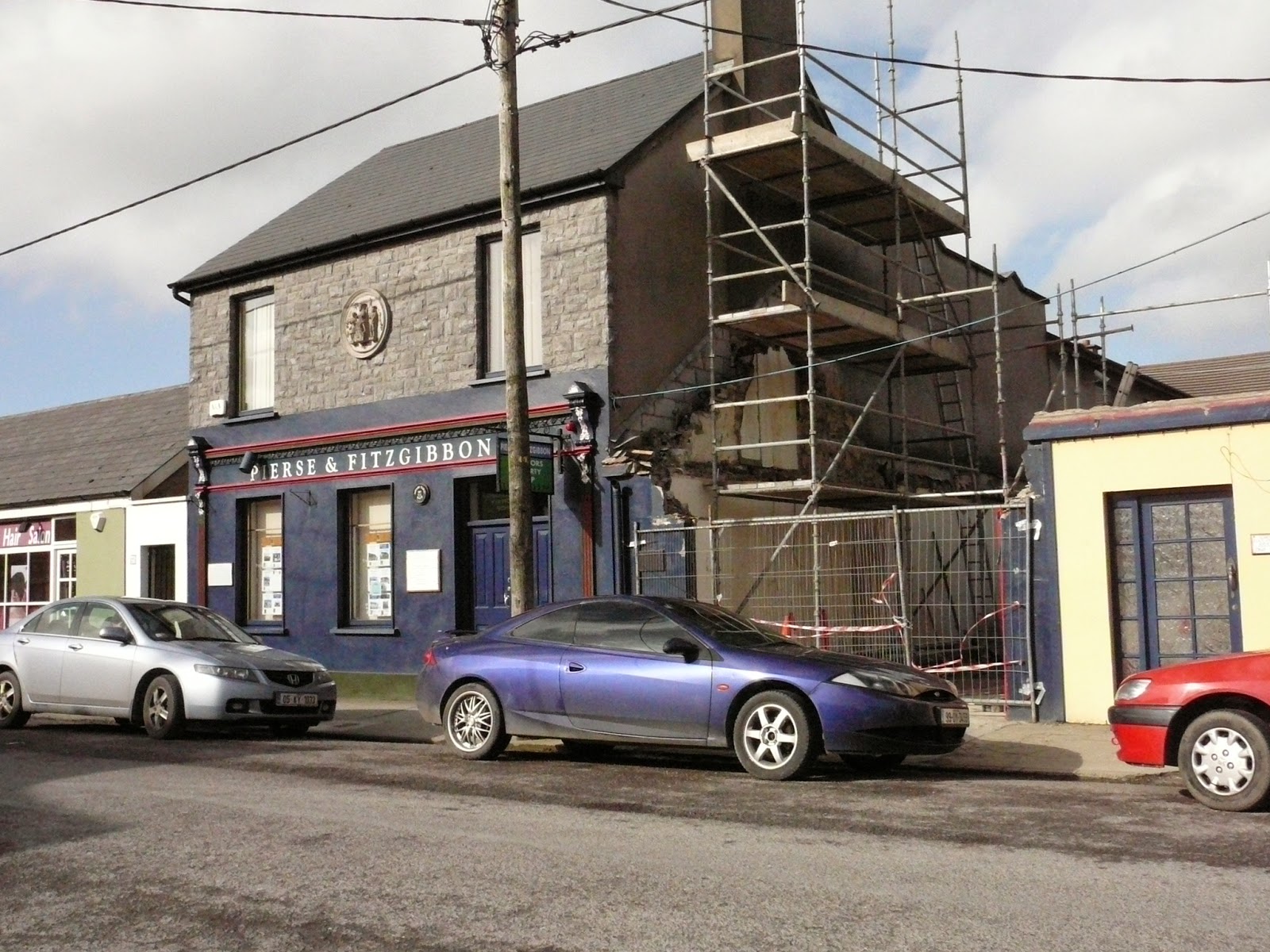 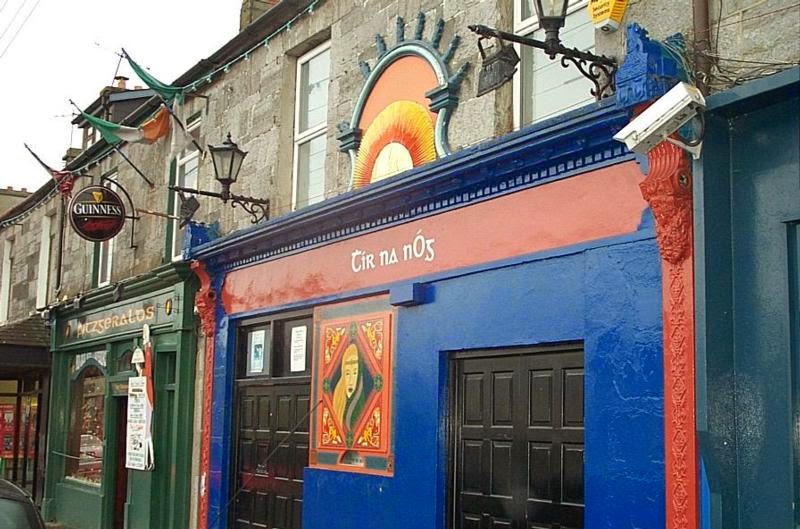 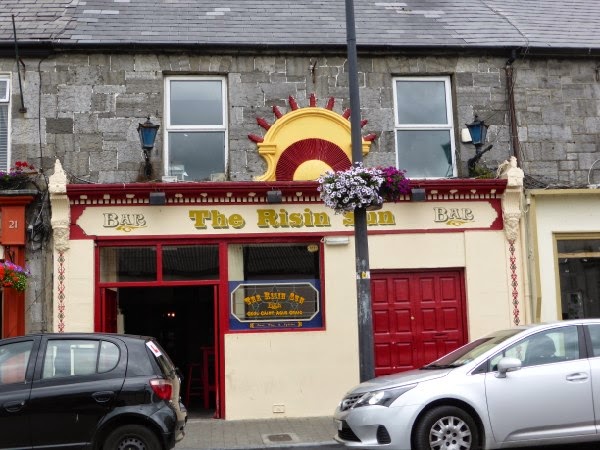 Some places are much changed, some just a little 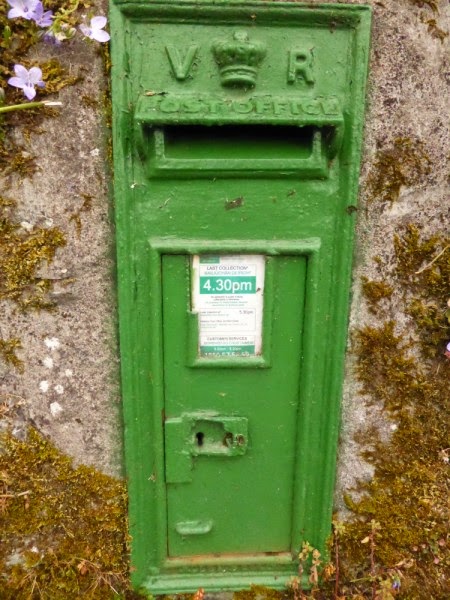 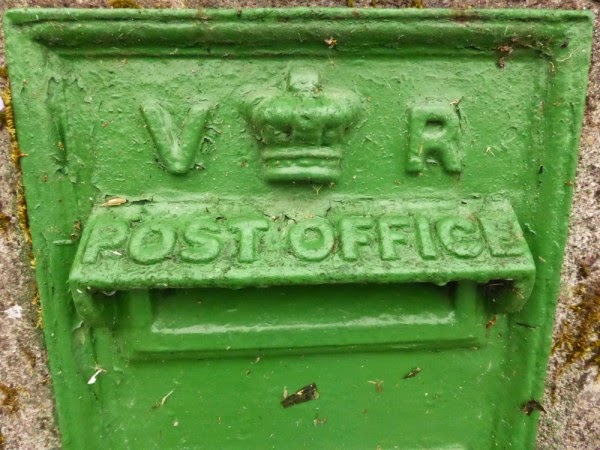 I don’t think that there are any post boxes from this era in Listowel. I spotted this one on my travels in East Ferry, Co. Cork.

They had a great haymaking event in Bromore recently. An old fashioned meitheal gathered to help Mike save his hay and they enjoyed tea and confectionery in the meadow. It’s the first time I’ve seen hay piped home. What a setting for a day in the meadow!

This is my brother, Pat, and my niece/ goddaughter, Elizabeth in the RDS with Mr. Riordan, their very special horse. Mr Riordan was bred by a man with a great eye for a horse. This man is Mr. Riordan, uncle of Elizabeth’s husband, who was, unfortunately, not well enough to travel to Dublin. He was well represented by a huge contingent of the Ahern and Riordan clans.

You saw the horse here on listowelconnection when he won his first show at The Kingdom County Fair in Tralee. He went on to win many more rosettes after that on his campaign for Dublin. Qualifying for Dublin was the aim. Having hit that goal, a top 5 finish in his class was the next target. He achieved that yesterday with a magnificent display which saw him placed fourth. Much credit is, of course, due to his trainer and rider, Ann O’Grady who presented him in tip top form.

The sales ring, I’m afraid. My connections have taken him as far as they can go. He has huge potential and will go on to great things. My horse mad clan have truly enjoyed the adventure so far.