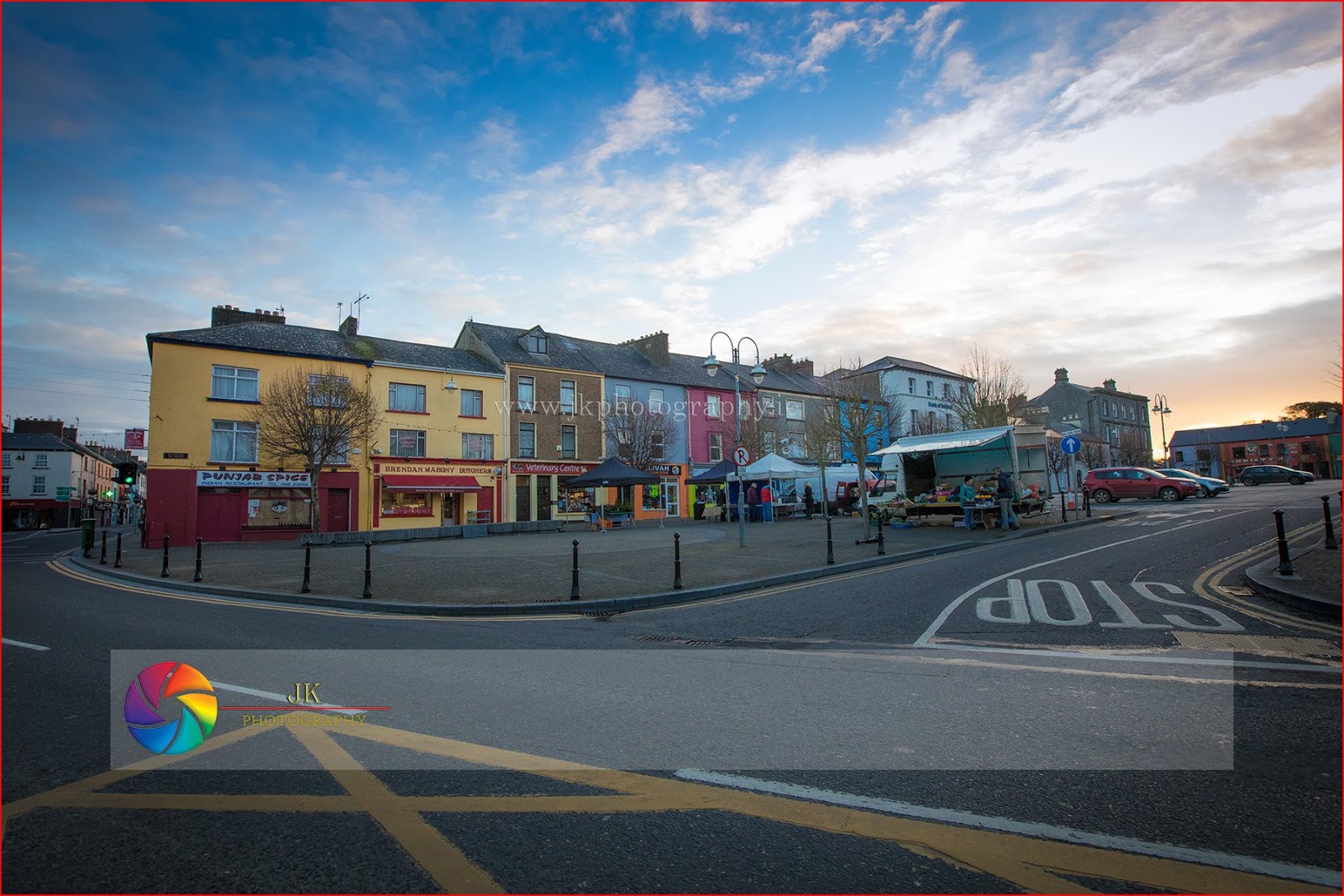 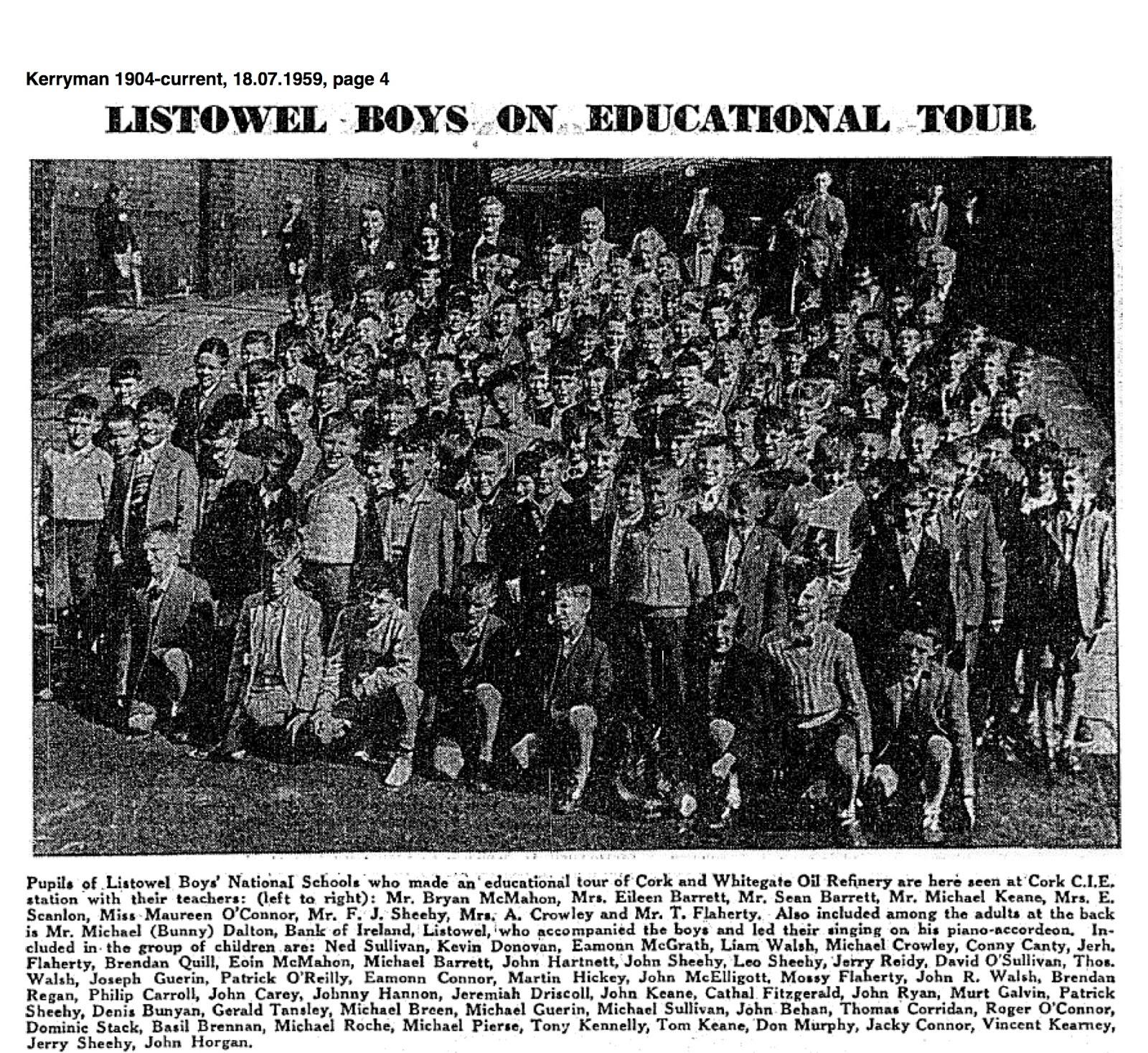 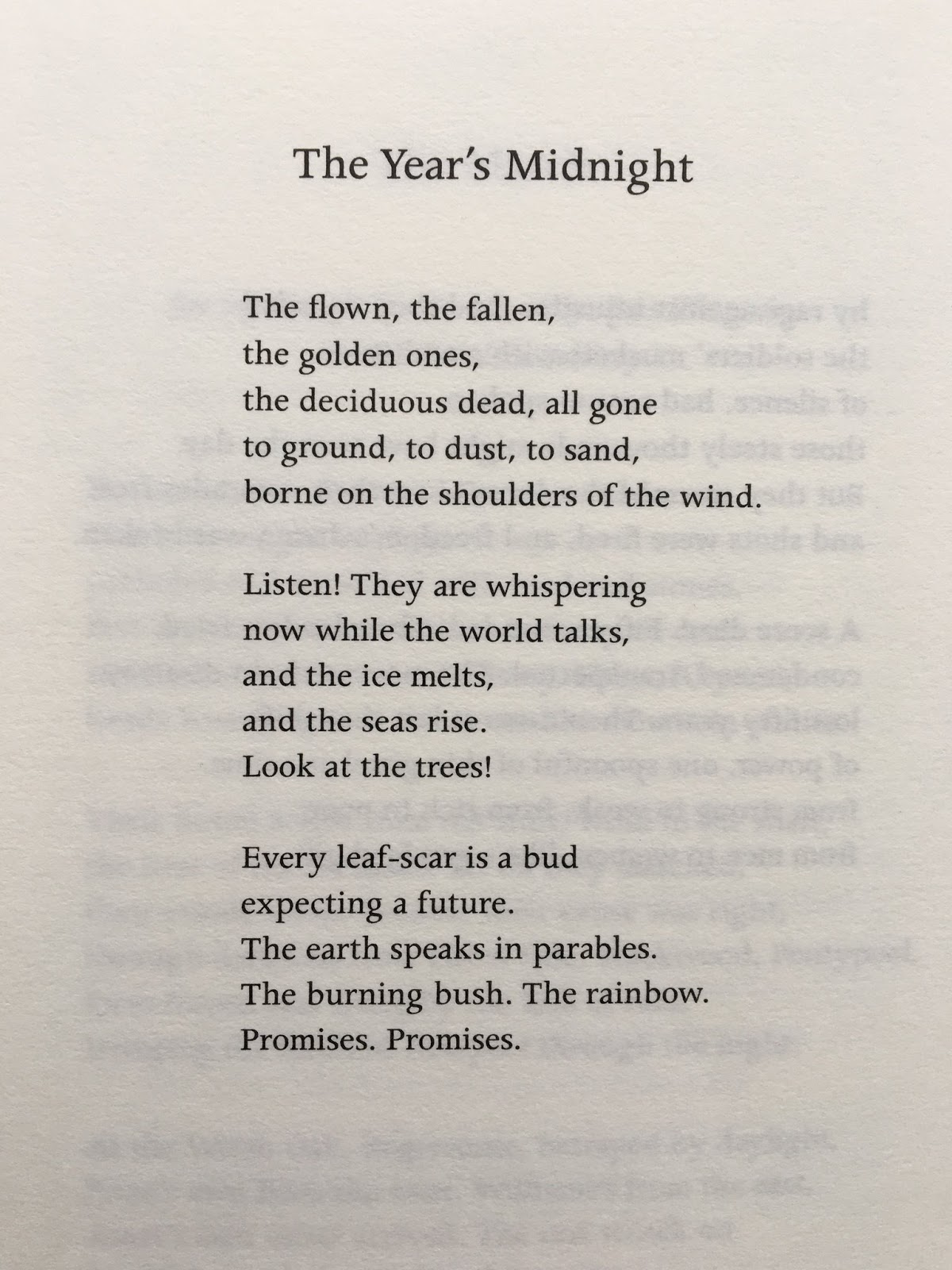 Edmund’s line came out with Cromwell.  They pop up as serving in Roger MacElligottes 51st Foote in the Kings’s Army.I know that they fought at the battle of the Boyne and there is some rumour that Valentine and Thomas followed Roger into the Tower when he was incarcerated.  Edmund lived in Ballyhallil in Limerick but as a dancing master he travelled around the country.  It was this that prompted the senior legal at the time to give him life because he used his role as a dancing master to sign people up to the Whiteboys.  I’m attaching a couple of items sent me by my cousin which detail the incident which eventually led to his capture.

I found it hard to reconcile his actions with a life sentence.  He was 51 when transported.  I have three other convicts all of whom were Rockites.  William Smith, a weaver from C. Monaghan, Thomas Maher who was implicated in the Holy cross incident in Limerick and Thomas Lysaght a Rocket from Limerick.  All three only got 7 years. Eddie is my favourite.  He was transported on the Brampton which was a ship with Irish rebels.  The guys looked after him, even reporting him as dead so as to keep him from the arduous voyage.  Luckily for me he was resurrected like Lazarus wgen he reached Sydney cove.  He was not a model prisoner and ended up in irons twice.  The final time he was released into his wife’s custody.  He also did a stint on the treadmill for being lazy but they did not take into consideration those calves of iron – conditioned from years of leaping as an Irish dancer.  I have written a chapter on Eddie which I can forward to you if your interested.  I have found that most people tend to glaze over when I start with my obsession but if I can weave things into a bit of a story, they come alive.  I try to be clear on whether its a good story or a true story.  (trained as a historian)

The O’Keeffes were in service on an estate called Lottaville.  My Great grandfather was baptised at St Patrick’s Cork in 1833.  His father was Cornelius O’Keefe and mother Mary Milliwick – the only information I have is a parish entry for their marriage and that reads Cork and Ross – Glanmire 1828-1841.  William married Julia Cotter on 15 October 1859 in Mayfield Ballinamought East, St Anne’s Shandon Cork.  They were both in service at Lottaville.  they had 2 daughters and 5 sons.  The youngest – my grandfather in1873.  Julia died 10 days after my grandfather died.  Luckily, the master of Lottaville (Capt Grey?) kept the family on.  Even when William left for Australia as a self funded emigrant, he allowed the family to stay on at Lottaville until William could send the money for the fares for the children who came to Australia one year later.  Needless to say, English kids travelled free.  I have so much respect for William because he made sure that his family didn’t go into the poor house but he worked to earn the money to bring them all out together.  It was difficult to track the family because of the English requirement that O’ was dropped from the name.  My aunt was most particular that the O’ was used and that the name was spelledlt with a double ff.  I have some photos from my great aunt’s album with photos taken in Cork.  Pretty amazing that people who did not have much took the time and effort to have a photo to celebrate their existence and this was continued in Australia.

Bray’s of Raheen – my great grand mother X2 are a hoot. They trace back to Hugh Brady Arch bishop of Meath.  Needless to say a tad more posh than the others.  But the brother E.J Brady has titled himself the grandfather of Australian socialism.  He was also connected with the kibbutz like settlement Ralaheen which was set up in Clare to try to give Irish farmers a shot at being self sufficient – not having English landlords or being require to tithe to the protestant church.

They were such an interesting lot.  I really have to acknowledge the research of my cousin Joanne who has been doing this for years and most of the wonderful insights have evolved from her hard work.

We’ll definitely have to catch up when I arrive.  I think with all the rebel connections, I might even ask for a passing parade from the lads.

(Note; Photographing windows is very difficult because of reflection and  glare) 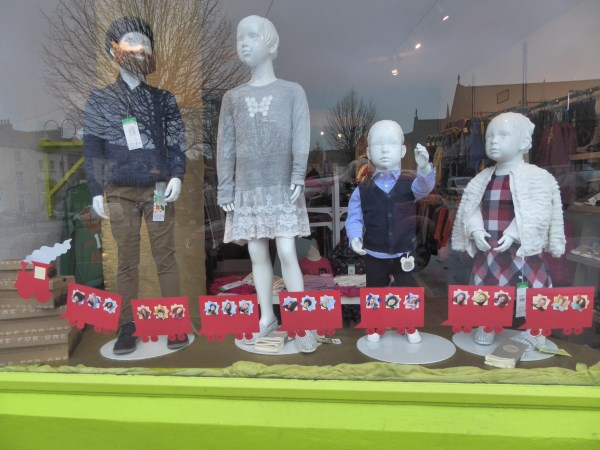 Coco Kids in The Square 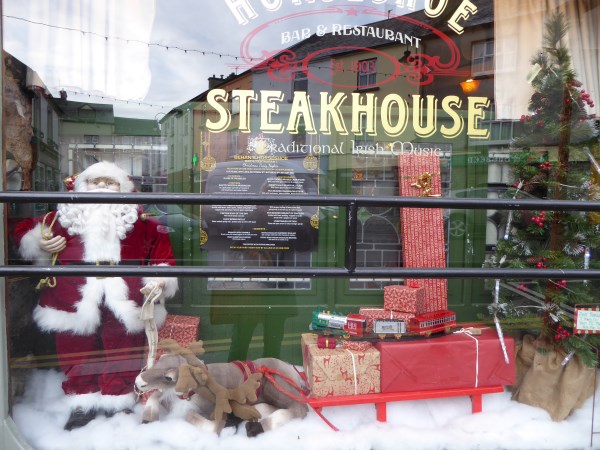 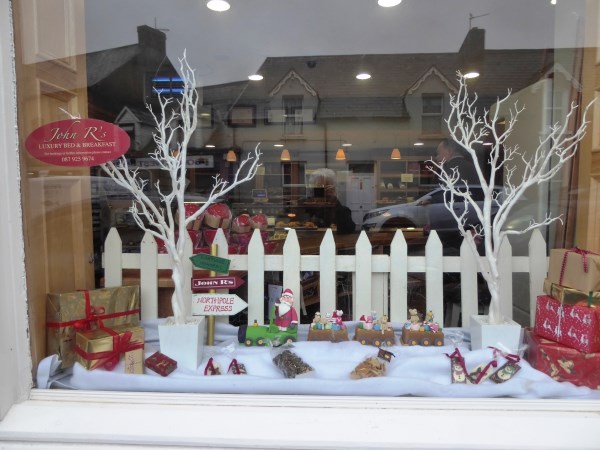 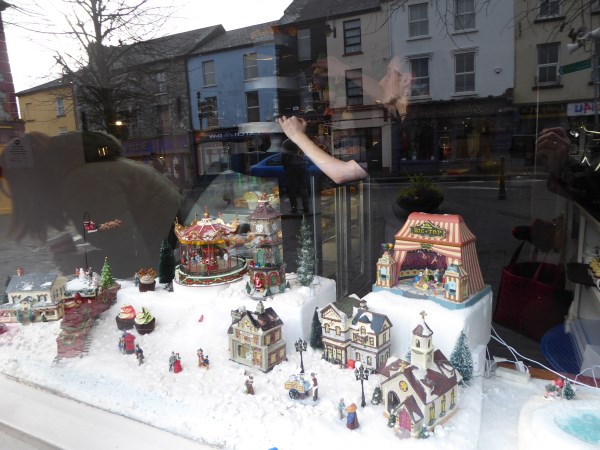 In the 1840s in Ireland workhouses and well meaning groups such as The Quakers set up soup kitchens to relieve the hunger that was claiming lives daily.

These famine relief kind deeds often took the form of huge pots of “soup” which were prepared for the starving people.

One of the more horrific stories told of that time is of starving children, demented by hunger, crowding round the big cauldron and getting scalded or falling in. 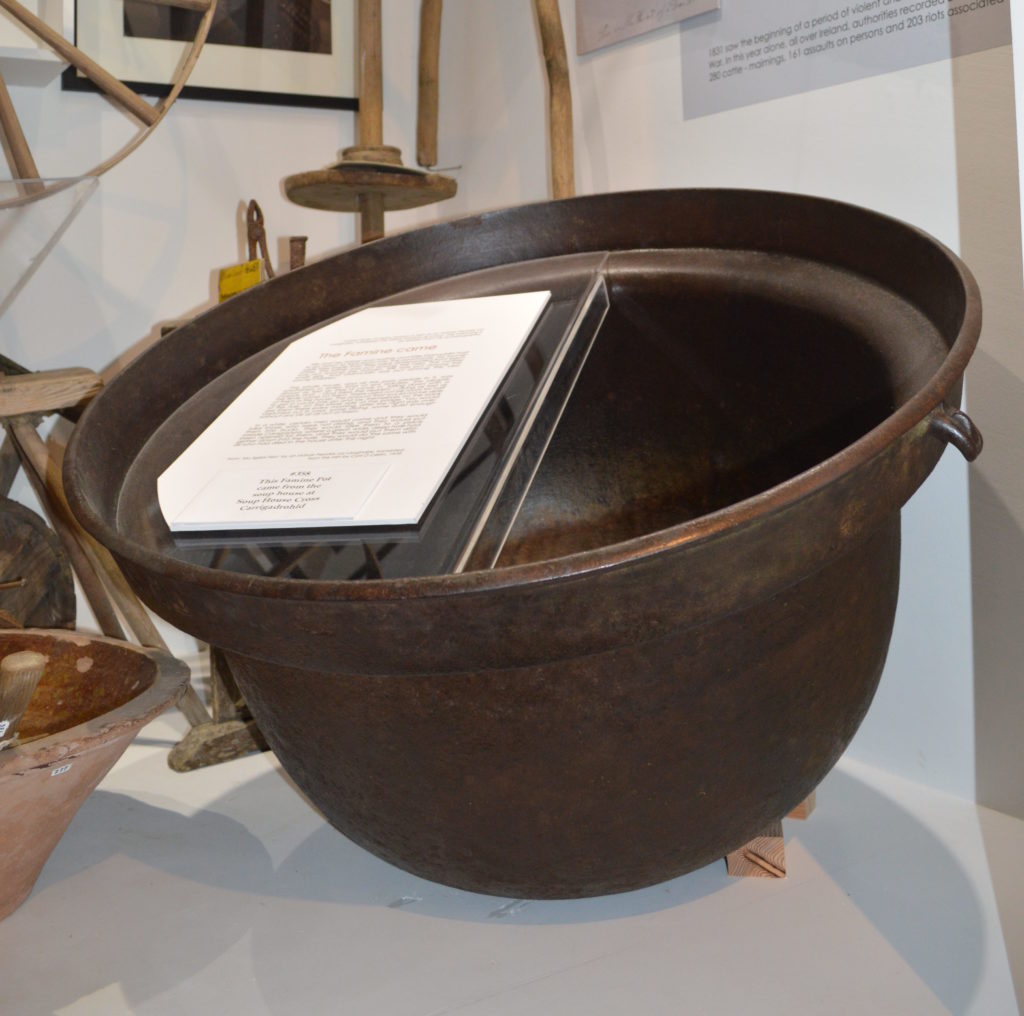 This pot is on display in a museum in Kilmurry in Co. Cork. There is a great website devoted to Famine pots and well worth a visit. Here is the link:

Seeing a photo  of Jackie McGillicuddy yesterday awakened a memory of a kindness at Christmas for Cathy Dunne. Here his what she wrote:

“The story of Jackies toys took me back. Every year I put away the toys for my five children in September and paid every week for them. One year the included batteries. Jackie said he would not put the batteries in but would give them to me separately when I collected the toys. Christmas Eve when I opened the packet there was no batteries. I rang but Jackie was gone home. The children were disappointed but I told them Santa must have forgotten the and would return soon with the batteries.

On St Stephens Day Jackie arrived full of apologies and brought a huge compendium of games. Luckily the children were out and did not see “Santa”.

Jackie was a wonderful gentleman. That service would not be available now.”

Well, I’m happy to inform Cathy that I’m reliably informed that Seán, Jackie’s son who now runs the business, is just as kind and accommodating as his dad. It’s a lovely shop to go into and all of the staff are helpful and knowledgeable. You can still pay in instalments and they will keep the toys until Christmas Eve.