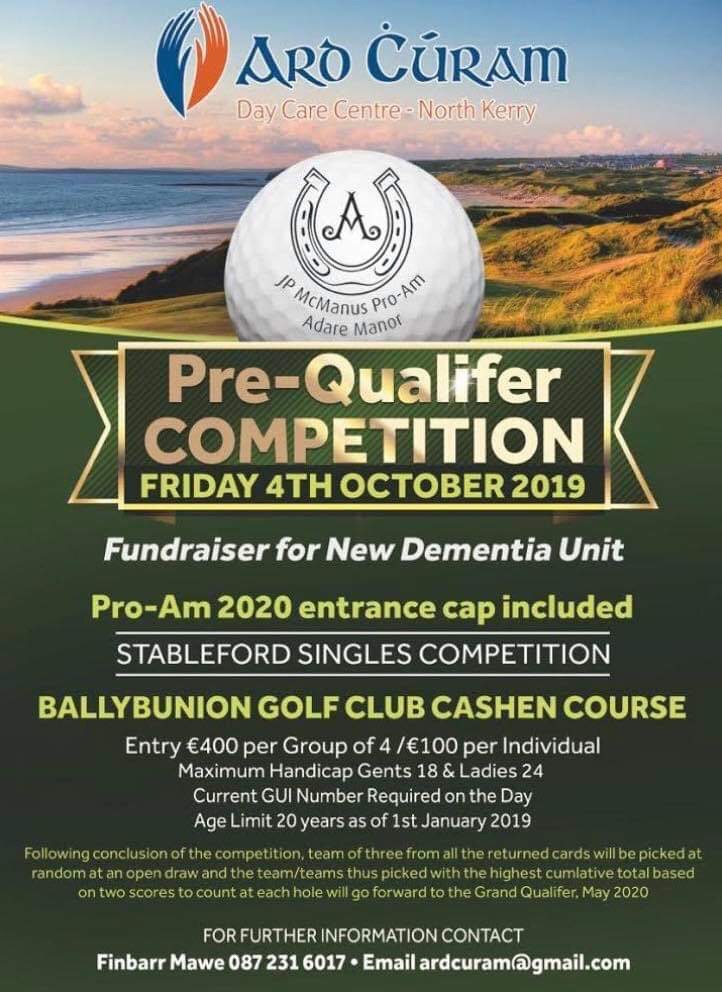 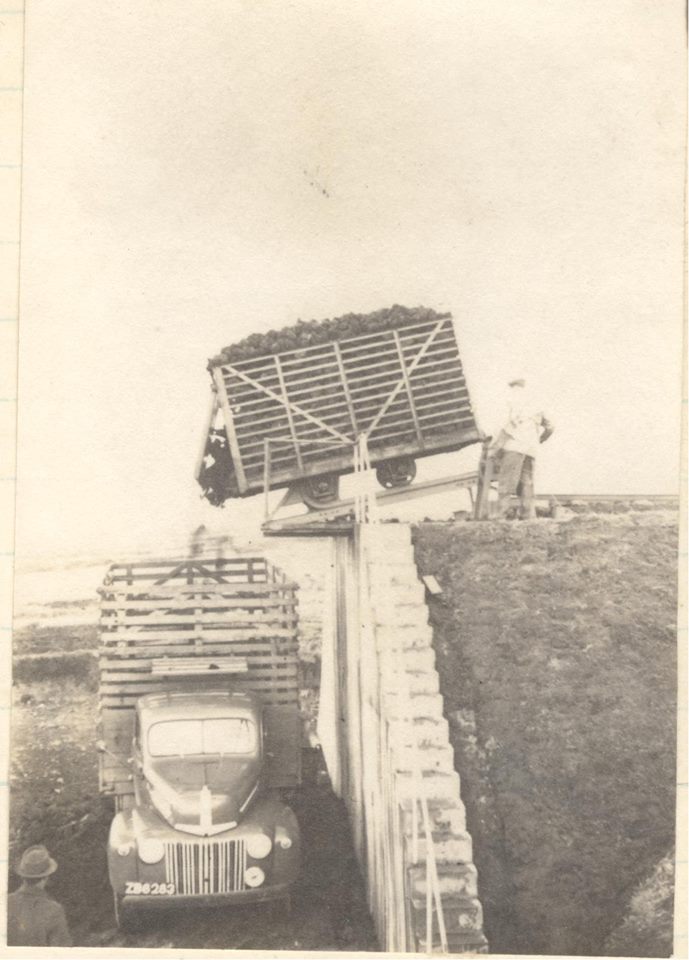 Tony McKenna posted this photo on Facebook in January with this caption.

“We might have posted this a few years ago. It shows the tipper at Barna Bog, Co. Kerry. The caption states the photo was taken by Mr. E. Switzer in April 1948. However Barna didn’t officially start producing turf until 1950, so is it Barna or Lyrecrumpane? Switzer worked for BnM in the early days, he was reputed to have lost an eye in the first World War and the family had a shop in Grafton Street.”

Then in the comments some people with local knowledge helped him out. 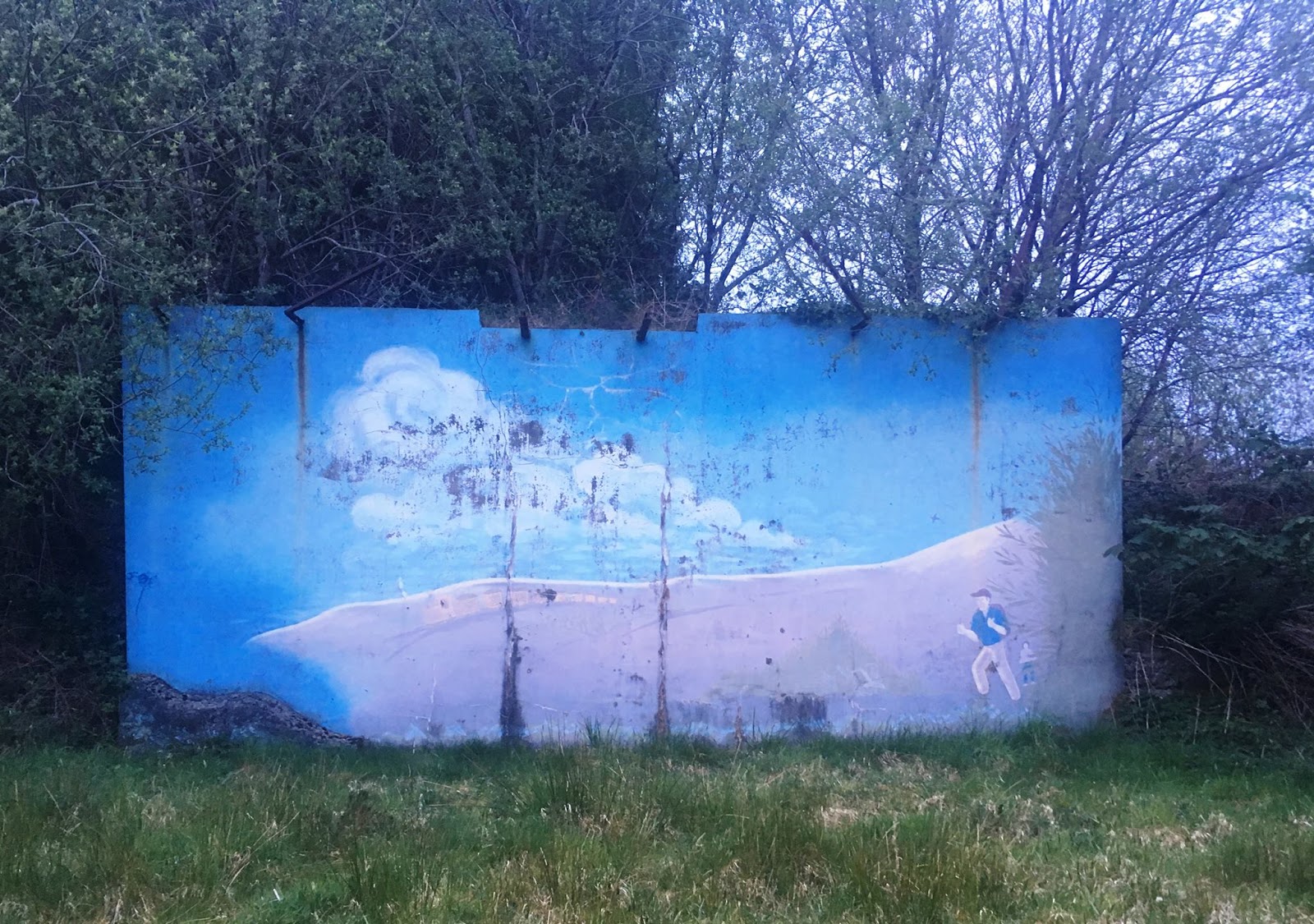 This photo is of the Tip at Lyreacrompane as it stands today. I never remember it having steped walls at the sides as in the Switzer photo but I wouldn’t remember back beyond 1955. Perhaps it was altered. I will check with locals in Barna for any memory that might solve the mystery…

“Definitely Barna, The truck is Cadbury’s Rathmore. At this time it was hand cut turf. Next came a spreader which was filled by hand before the bagger arrived. A brilliant quality photograph.”

Interesting in a quiz, you know the answer instantly but given time doubts set in. Same here I withdraw the words definately Barna. The tiphead in Barna and Lyreacrompane were identical as far as I know and theres little background. There is another photograph of that truck taken from the side. The truck was new and was brown the Cadburys colour. It has a Cork Reg. and Cadburys factory is on the bank of the Blackwater but on the Kerry side of the river.The man with his back to the camera could be the manager Jerry o Leary, he was a slender man that always wore a hat. In the view from the side the embankment is Barna, much higher on the right than the left. Lyreacrompane is on flat ground.

When is Church Street not Sráid an tSeipéil? 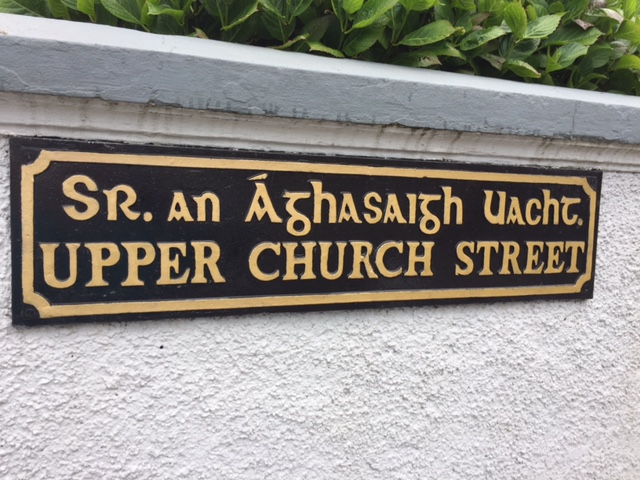 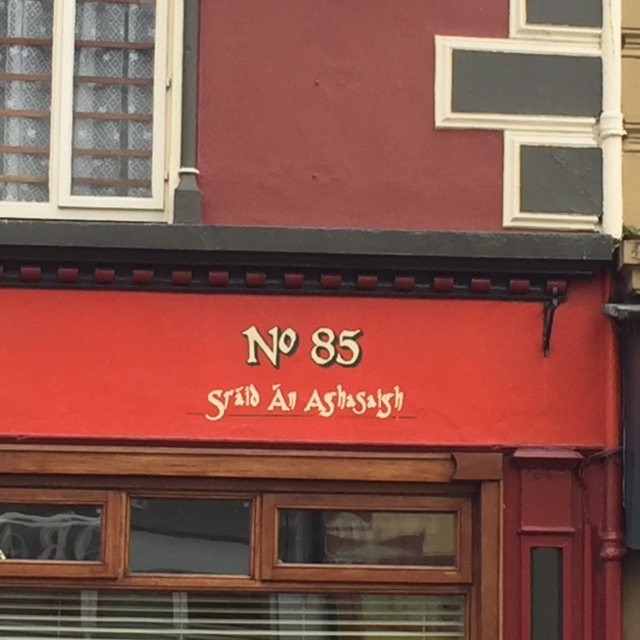 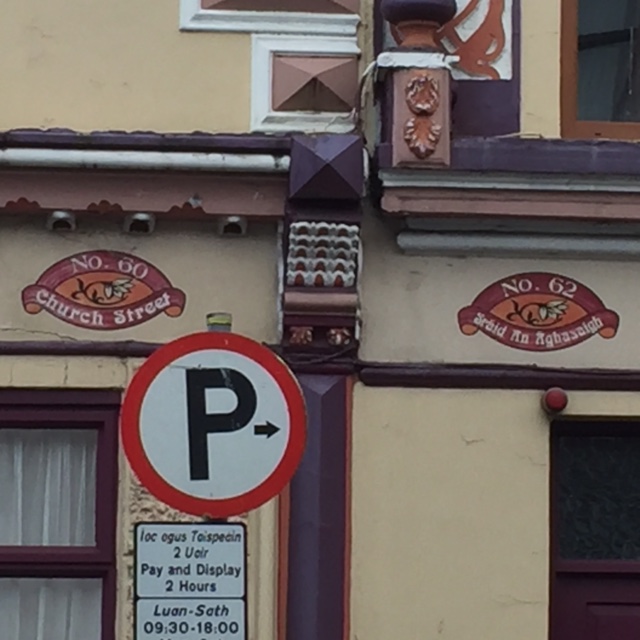 This Listowel solution to a Listowel problem has been puzzling a few people since I raised it here. 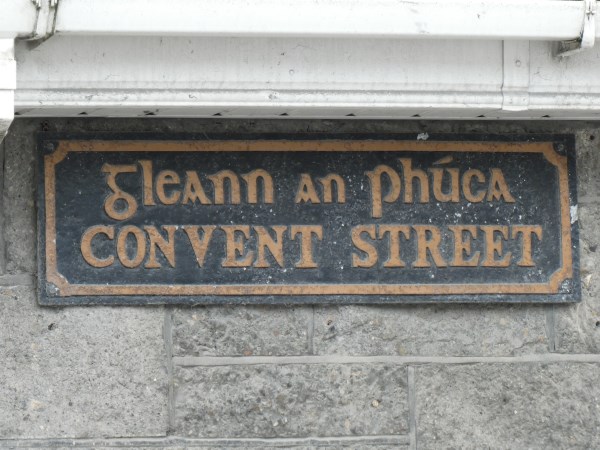 Will you look at this one? The Púca is the devil who would catch you if you were out late and not minding your own business. How come he shares a name with Convent Street. 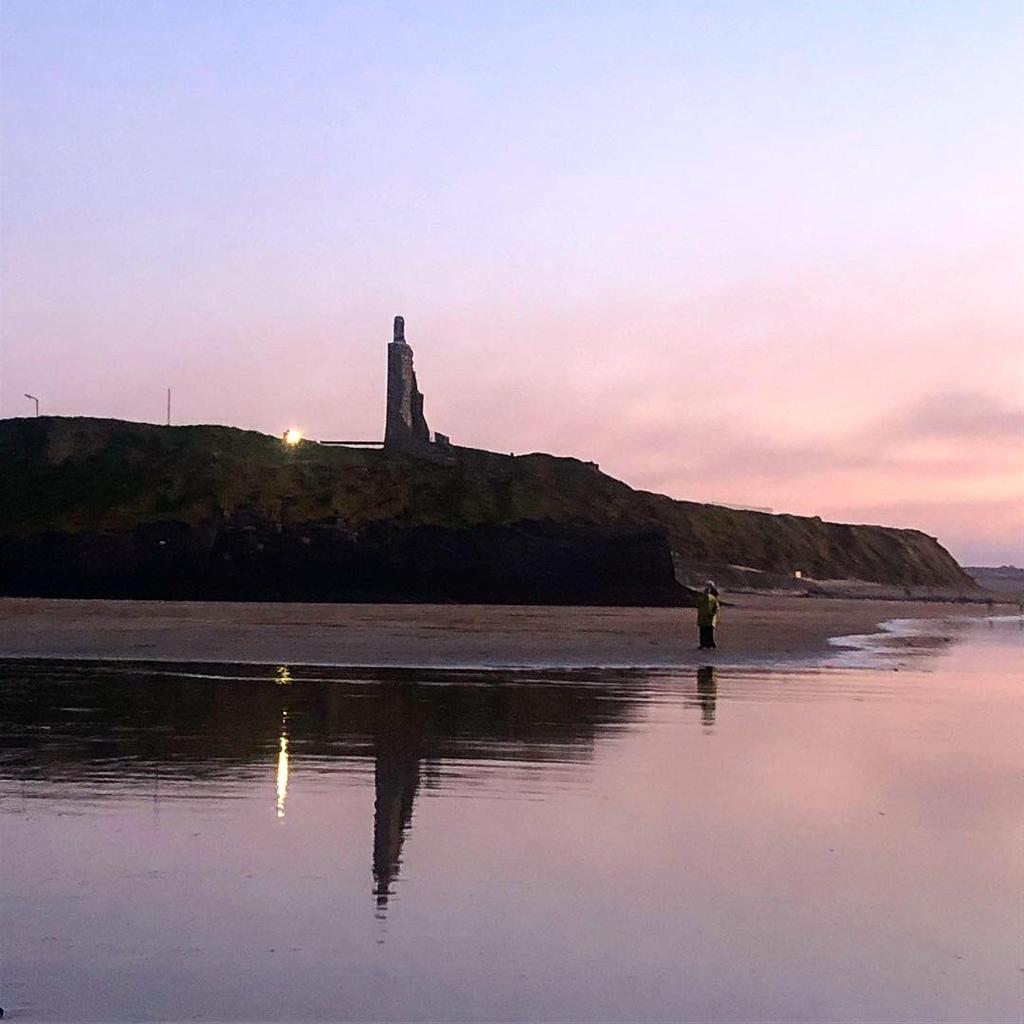 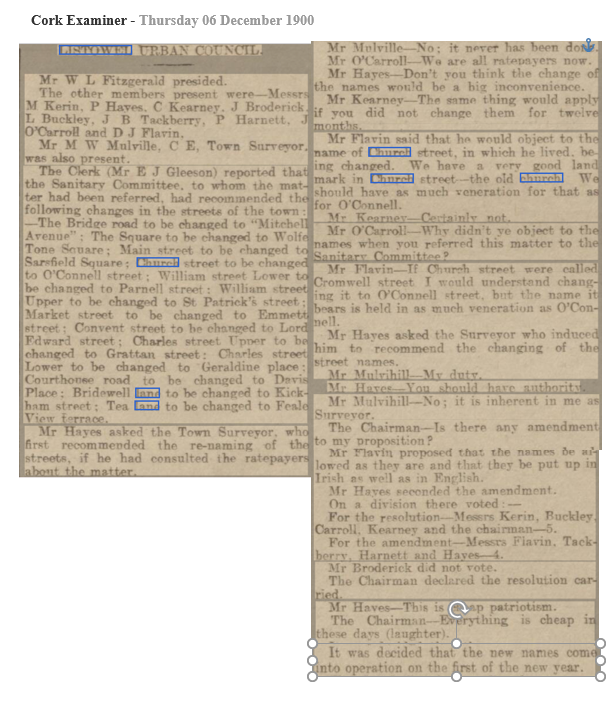 When I wrote about St. Patrick’s Day stalwarts previously, I missed one man who is the heart and soul of the entertainment on St. Patrick’s Days in Listowel for as long as I am in town. That man is our own dancing master, Jimmy Hickey. This year his dancers were the highlight of the day at the St. Patrick’s Day mass in St. Mary’s parish church. 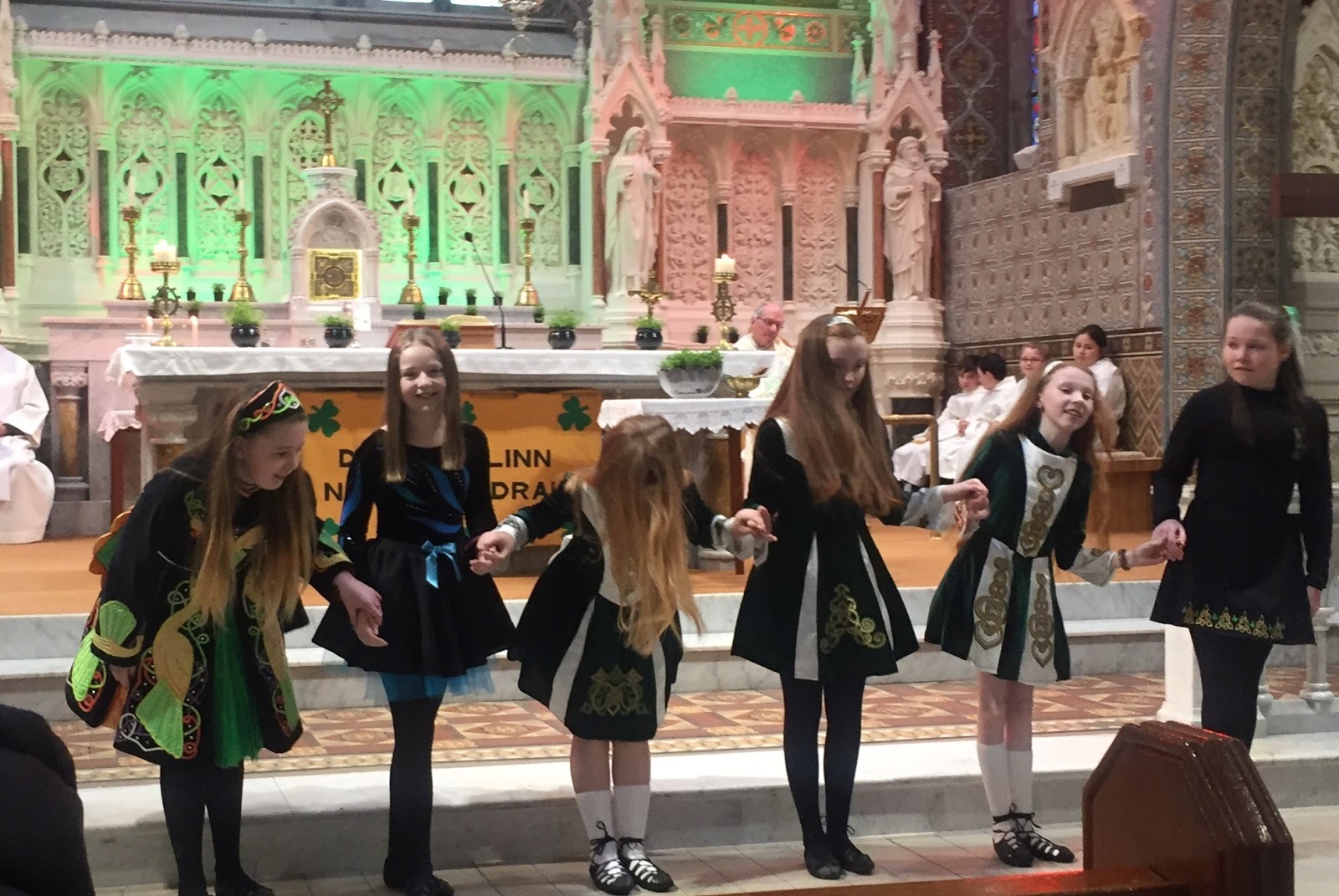 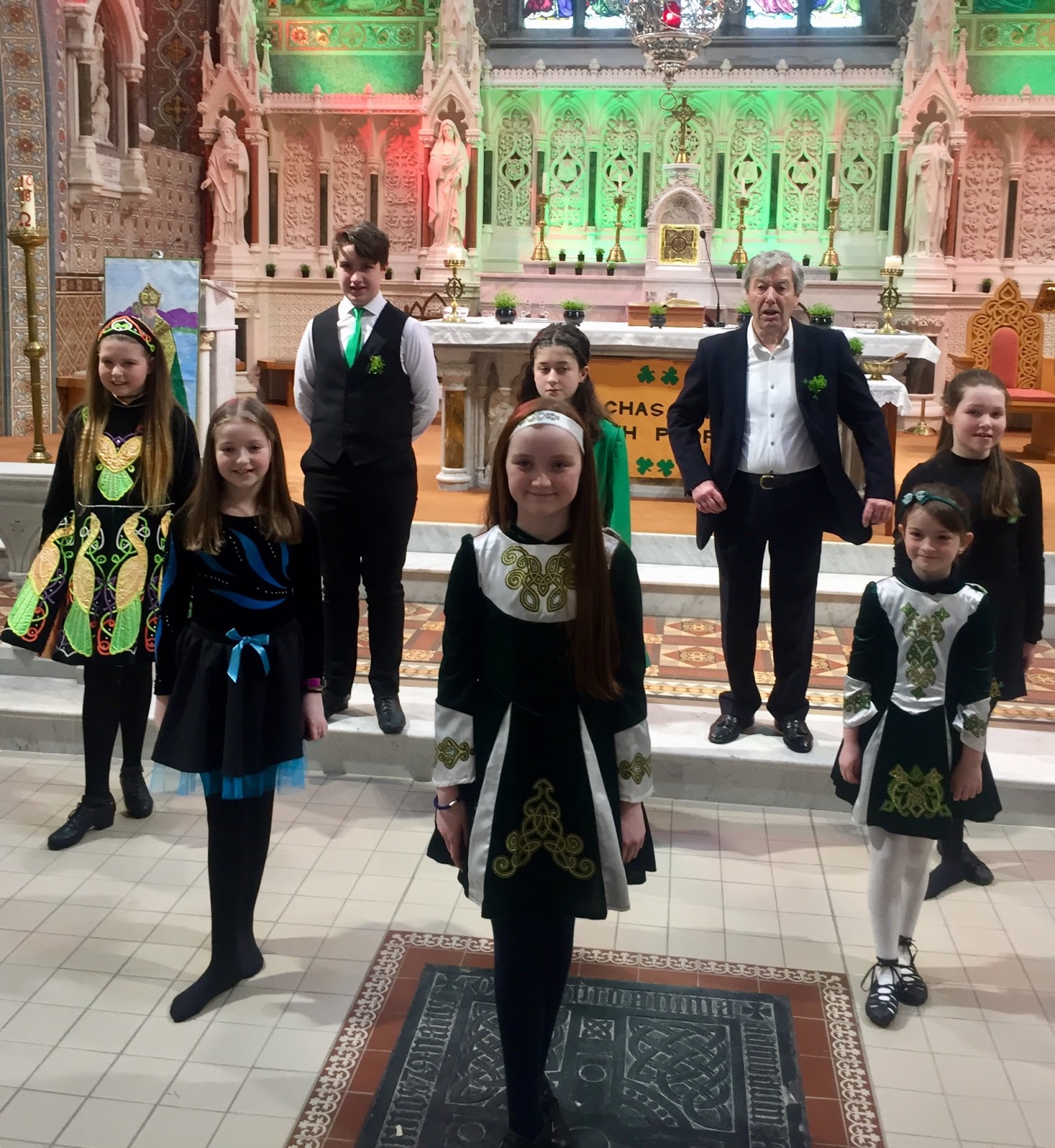 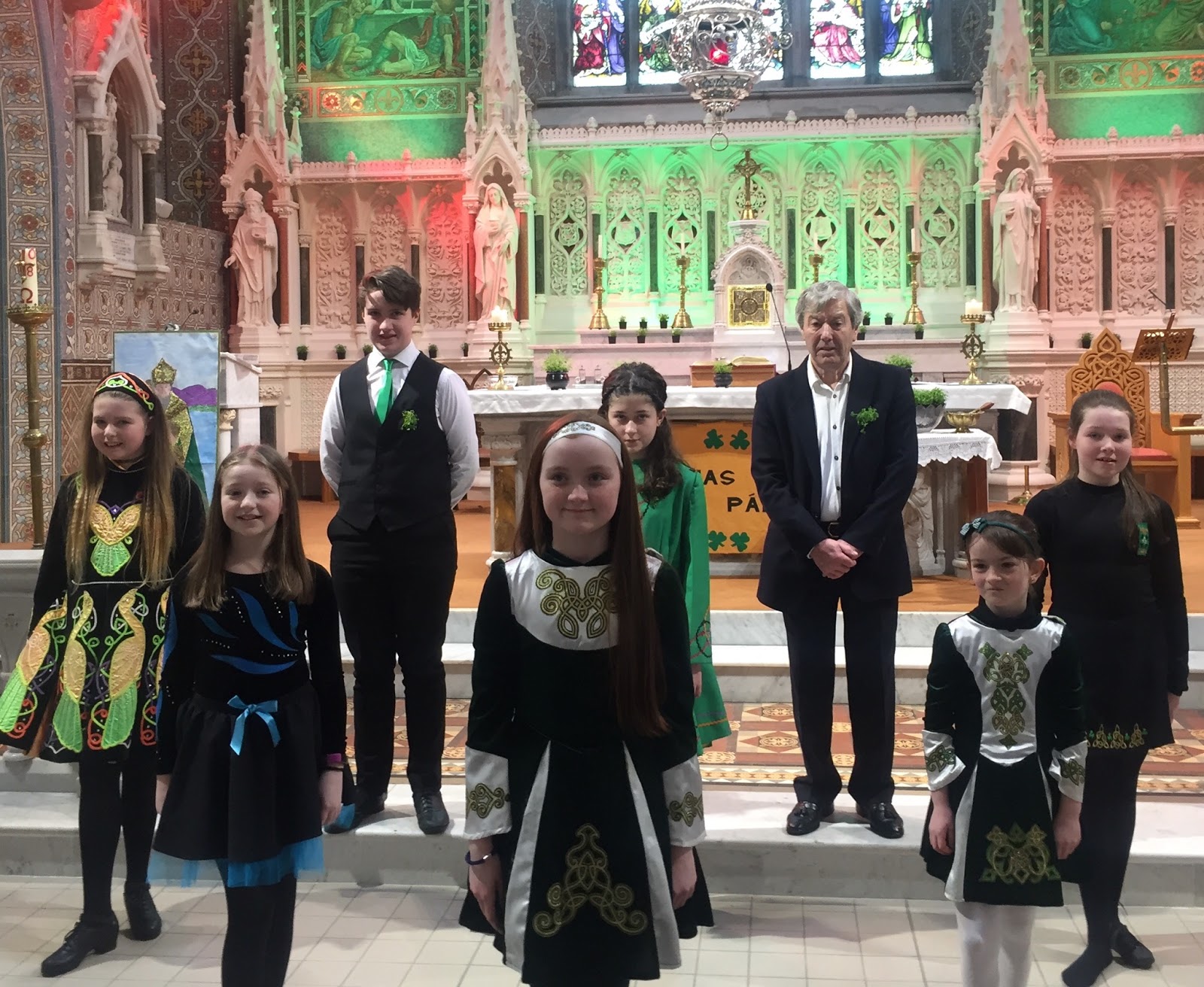 Another stalwart of St. Patrick’s Days in Listowel is Anne O’Connor/ Brosnan. Presentation Primary School marching band under her stewardship  has provided the musical colourful element to the parade. Her family have taken up the mantle  and over the years we have watched Mairead and Patrick entertain us from the stage.

This year Patrick’s stage was the step of the altar. This video is a joy to watch. Notice too his dancing teacher, Jimmy Hickey watching proudly from the wings as his star pupil struts his stuff.