That Dublin Mayo Match, Hugh O’Flaherty Garden, The Ashes in 1960 and The Land War in Munster in 1886 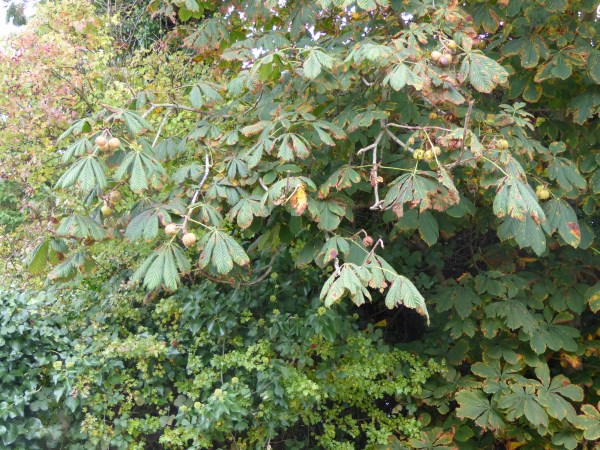 I’d rather see a sermon than hear one any day

Fr. Vincent Sherlock, a Mayo priest, posted a great sermon on his website after his team’s heartbreaking defeat to Dublin last Saturday. I’m just reproducing a section of it here but you can read the full post at the link below; 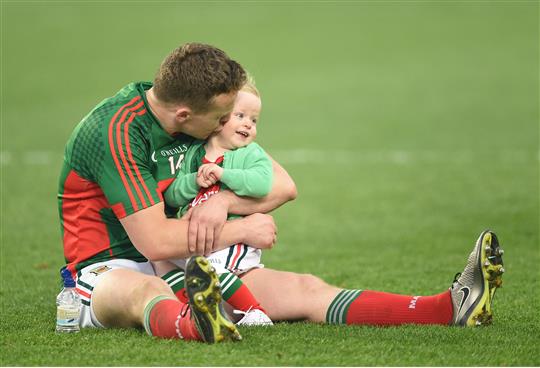 The photos shows Andy Moran lying on the grass of Croke Park and his daughter sits on one of his outstretched legs.There’s something healing in that photo – something that says the Metal of Sam Maguire may be sought after but it’s cold comfort when compared with the flesh and blood you shaped, nurtured and nourish. The little girl sits with one who is not judged on which side he was on at the sounding of the final whistle but on one who is her “father”, provider and one who loves her unconditionally. The love is likewise returned. She is undoubtedly more crucial and cherished than a cup to be passed from hand to hand, team to team, year to year. In this child, in this picture, is life and all that is meaningful therein. 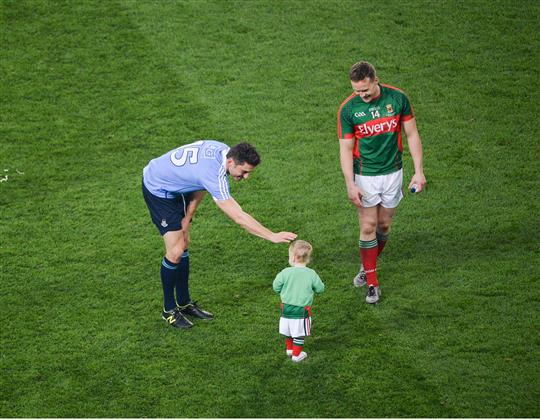 The second photo is of Bernard Brogan of Dublin reaching out to place his open hand on the top of the little girl’s head. Andy is now standing, smiling as he watches this gesture. To me, the Dublin man is saying “be proud, very proud of your father. I’ve given everything I have over the last seventy and more minutes to hold him back, to beat his team but you have a father to be proud of there.” I’d like to think that somewhere deep within, he might even feel a tinge of regret for Andy and his teammates but more than that, it’s a gesture that says when the game is over, life goes on and must be cherished. It’s moment that speaks of a respect between players, even when on opposite teams, maybe especially when on opposite teams. 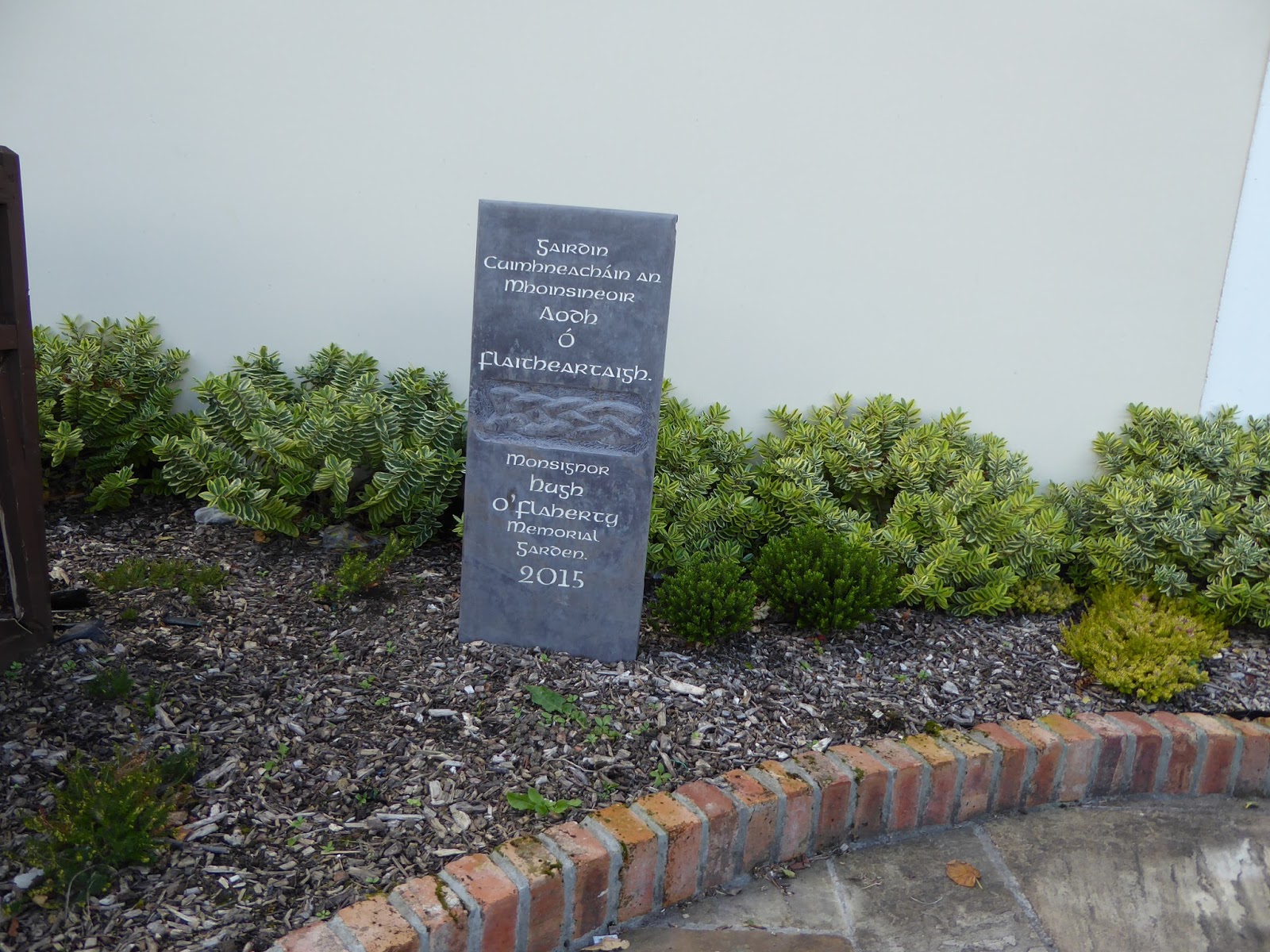 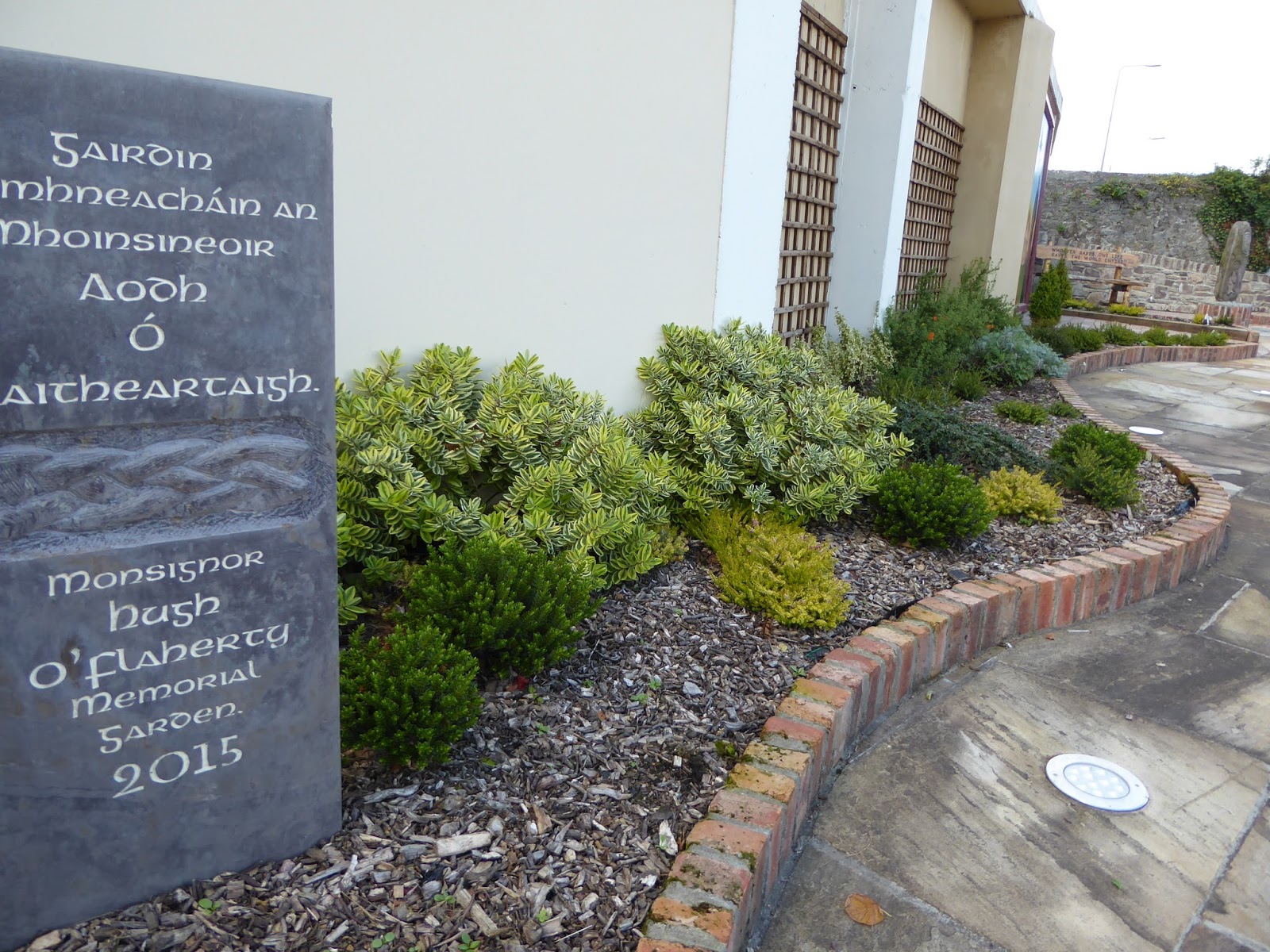 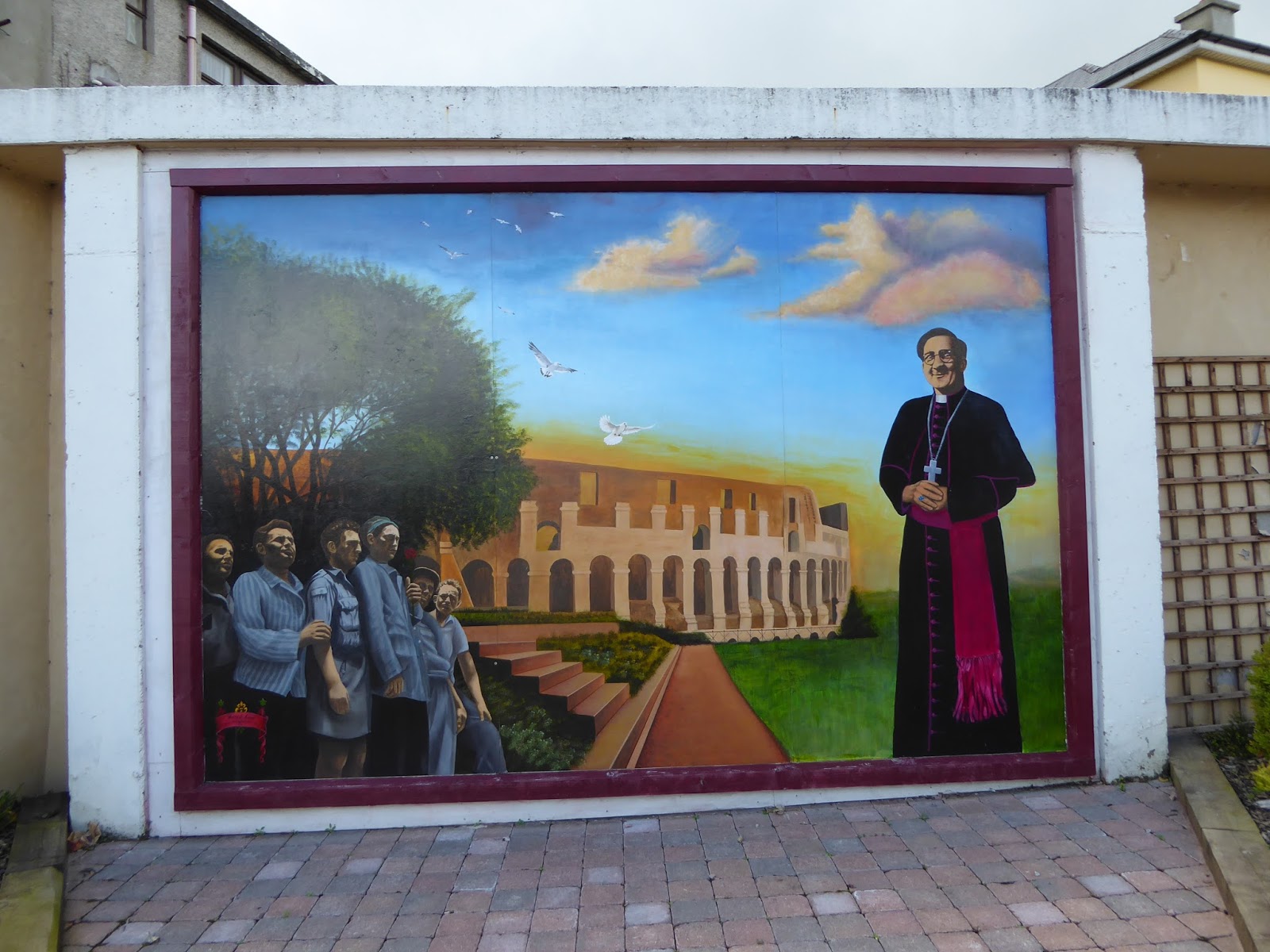 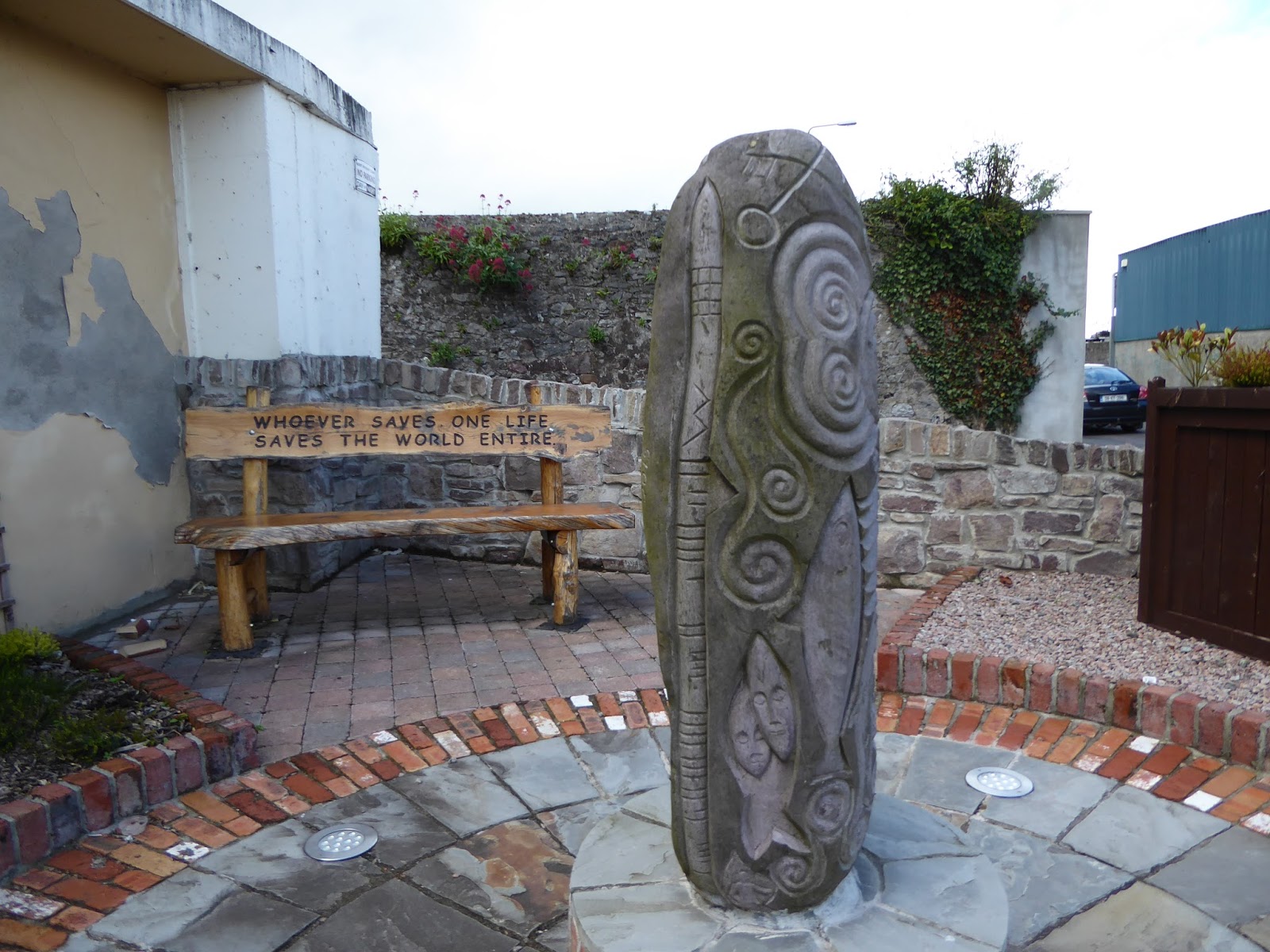 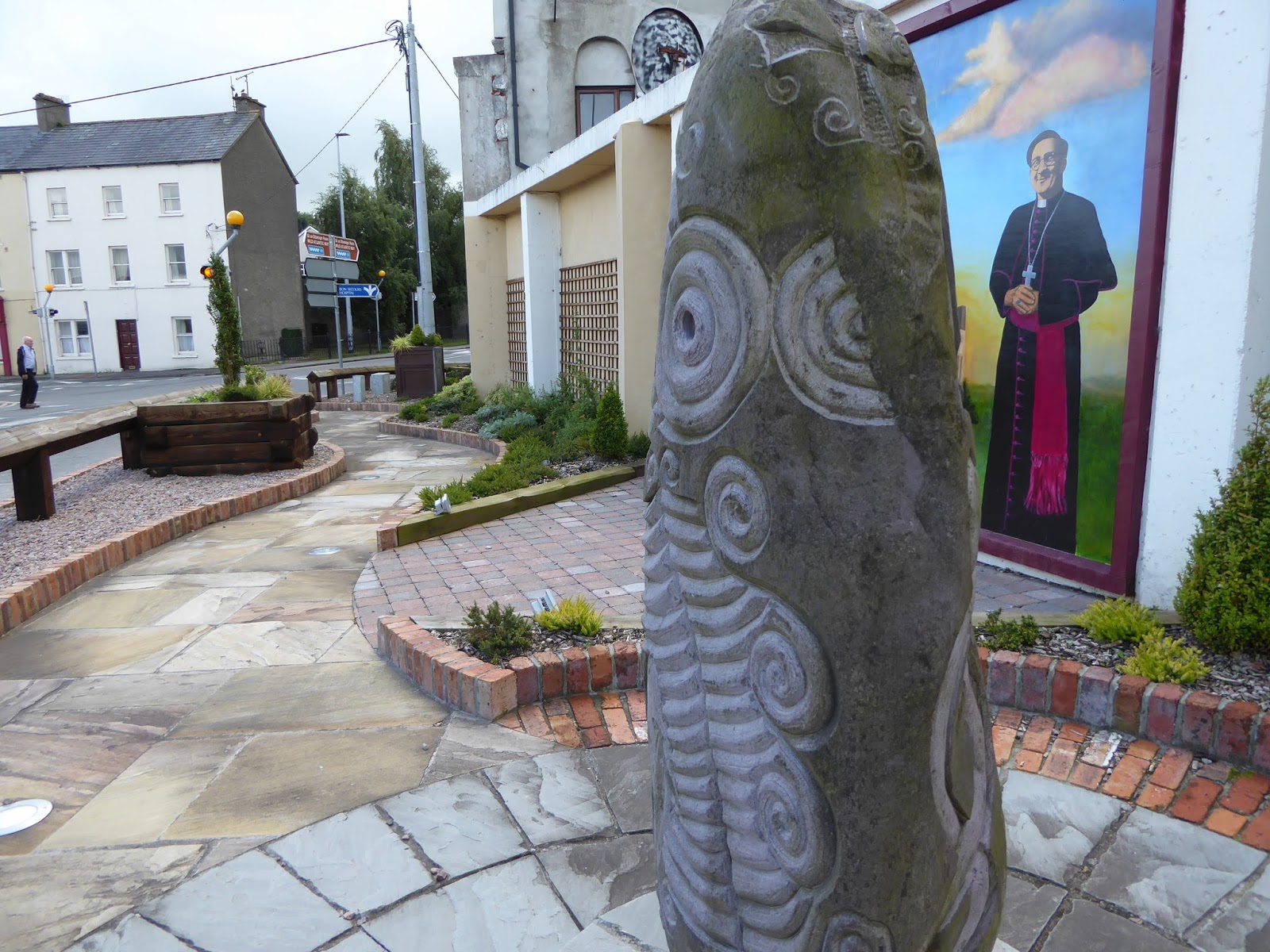 This is a lovely memorial to the great man, Hugh O’Flaherty. It is situated at a very busy corner in Tralee. It is beside what I have heard described as a Kerry roundabout, you know the ones that everyone drives over rather than around. This roundabout is on the way to the Bon Secours hospital or the turn off for West Kerry.

Down Memory Lane with The Advertiser 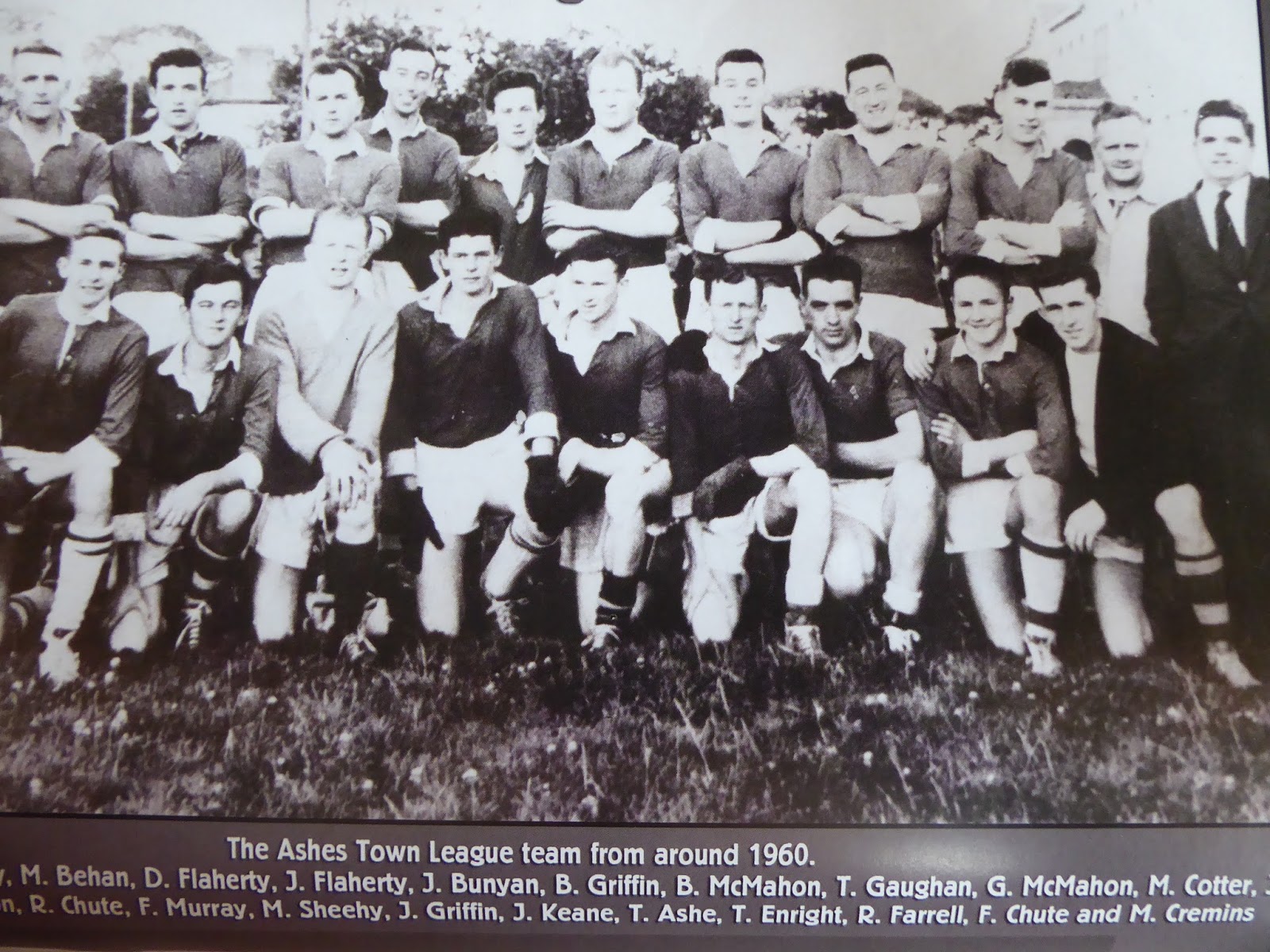 The Dublin correspondent of the Times writes :
A gentleman who has been obliged to employ emergency men sent 23 or 24 cattle
into the  fair near Tralee a few days ago. They were of good quality, and
were sold without difficulty to a stranger. A local butcher, however, who saw
the  sale, got up on a bale, and, addressing the people, said the cattle
were  boycotted. The bargain was immediately broken off. The same butcher
lately took a farm on the seashore where the people  had been in the habit
of drawing seaweed, and his consistent patriotism has been shown in his refusal
to allow them to take any more  weed.

Examples of this kind might be
multiplied by the score in every part of the  country where the League is
dominant. Its power is not exercised against landlords alone. It is now dictating
terms to the banks, and threatening to boycott them if they do not obey its
orders.

It was recently attempted in Listowel, in Kerry, in which a farmer who

borrowed from the  bank was pressed for
payment. He  complained to the local league that the bank demanded to be paid
in full, and it appears, from a report in the Kerry Sentinel of a
meeting,  which Mr. Sheehan, M.P., and Mr. Stack, M.P., were present, that
a deputation, to be headed by ‘Father Pat,’ was appointed to wait on the
manager and offer him one-half  his  debt. The result of this view is not yet known, but the  bank must borrow.

No man can deal with his
workmen, his caretaker, or his servant as he  thinks fit. If they are
members of the League they can defy him. If he displeases the  League his
servants will be ordered to leave his employment, and he must submit or take  the consequences. There is nothing to mitigate or counteract the
tyrannical and treasonable influence of the League.

An extraordinary incident occurred in
connection with the meet of the County Limerick hounds at Rockhill, near
Bruree. There was a large meeting of horsemen, but before the hunt commenced
the Rev. Mr. Sheehy, of Bruree, who was arrested during the land agitation,
attended, accompanied by a large  gathering of the country people. The  Rev. gentleman went to Mr. John Gubbins, the master of the hunt, and
asked if he was prepared to settle with his tenants. Mr. Gubbins replied that
he had offered his tenants a reduction of 25 per cent. The Rev. Mr. Sheehy
re-joined that what was required was a permanent settlement. As a result of the
interview, Mr. Gubbins refused to be dictated to, and said he was not prepared
to refer the dispute to arbitration. The Rev. Mr. Sheehy threatened that until
Mr. Gubbins settled with his tenants  hunting would not be
permitted.  The crowd who backed up Father Sheehy cheered him
enthusiastically and  made  it was evident from their aggressive demeanour
that they would have offered violence if Mr. Gubbins had persevered’ in the
hunt. Some of the dogs were beaten off, and Mr. Gubbins, seeing the state of
feeling shown, wisely decided to return home.

A man named Ryan, who had bought turf
from a boycotted farmer, was pursued into the chapel where he went to attend
Mass by an excited crowd, and had to seek the protection of the parish priest
from the violence of the  people. Before  leaving, the man promised
to return the turf on the following day to the obnoxious farmer, and the
neighbours accordingly attended for the purpose at the man’s residence to see
him carry out his promise. The turf was then stacked in a wagon, and  led
the horse in the direction of Mr. Griffin’s, the boycotted farmer’s house,
about a mile distant. The crowd, which numbered several  hundred, followed
the wagon. In passing through the  village of New Pallas, the procession
was further swelled by the  villagers and constabulary———–. On the
procession reaching Mr. Griffin’s  house, they found himself and his three
sons armed with guns and prepared to resist the return of the turf; but on the
police interfering with regard to the threatened use of the firearms, the
Messrs. Griffin quickly allowed the turf to be placed in the yard,  amid
cheers from the throng. 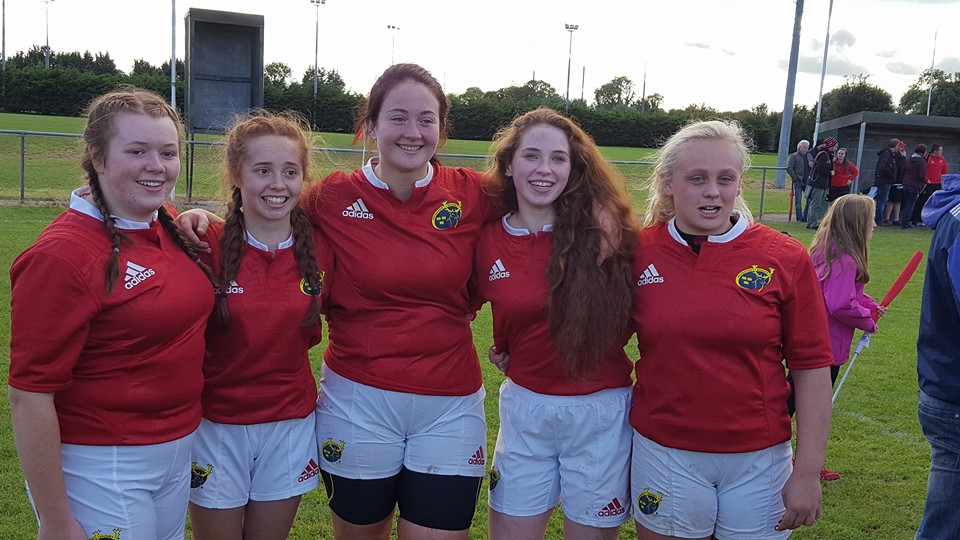 These ladies, members of Listowel Rugby Club, played on the Munster team who lost to Ulster on Saturday last Oct. 1 2016