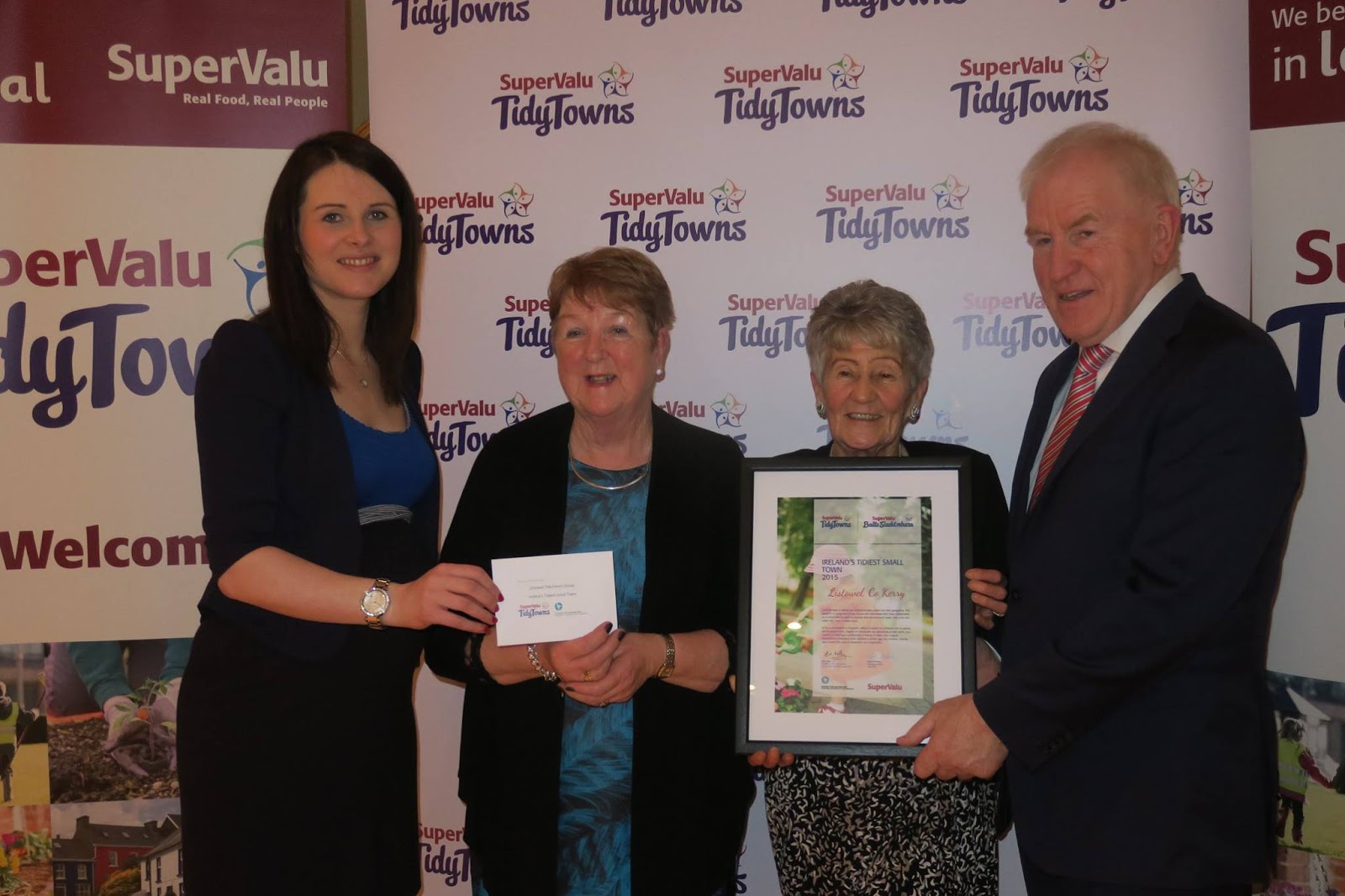 At a ceremony in The Listowel Arms on Saturday evening January 17 2016 the regional winners in the Tidy Towns Competition 2015 were presented with their prizes. Listowel was proud to accept the accolade for the regions tidiest small town.

Words of Wisdom from Vincent Carmody 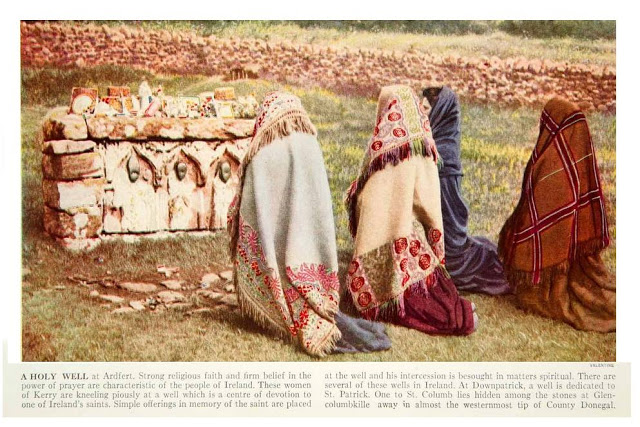 The holy well photograph, sometimes I think for the benefit of good photographs, many of the old tourist board, John Hinde ? etc, photographs were staged. As regards the colourful shawls, my view is that travelers sisterhood, due,  to the nature of their travels around the four corners, would have possessed some of these exotic technicolor dream coats!!, a more upmarket name for a shawl.

I barely remember my mother, I think, on one occasion wearing a black shawl, It may have been around the time of her mother’s death, 1950, It might have been something to do at her funeral. A neighbour across the street, Tessie Buckley, a sister of the cook’s, I remember wearing a black shawl going back to early Convent Mass.  Then it was 7.00 am on Sunday, 7.30 am on weekdays.

I served inside the altar at the convent, around ’56/57.   Following family tradition, my dad and his two brothers in the early 1900s and my brother Moss in the 1940s, .served as altar boys there as well. When I was there, a man from down the street, where Jumbo’s is now, Ned Gleeson ( he was a stepbrother of Lar Buckley, father of the cook ) and his wife Annie, who was blind, used attend Mass every morning, come hail or shine.

Years later, when I started to become interested in local history, I found out that this man, Ned Gleeson, gave the address of welcome on behalf of the Town Commissioners to Charles Parnell before he spoke in the Square. That was on Sunday 13th September 1891. So in a way, as someone who held a paten under Ned Gleeson’s chin, I was in a way attached to Parnell’s spirit !!!.

I have often thought that people don’t open their mouths often enough and ask questions. Imagine me at that time having an interest in history and being in a position to ask questions, “Now tell me, Ned, what did you say to him?

Did you ask him how he thought he would do in the next election?

Do you think marrying a divorced woman will effect you reelection chances?

How do you see Ireland 100 years down the road?

Some years ago, I was fortunate to have been able to do an adult education course at the Community College. During this, as part of the local history module we were invited to write about something of historical importance which happened locally.

The two accounts are totally different, an account of something written 70 years after it happened is, I think, often written from the personal viewpoint of the writer. This is why I also am sceptical of some (not all)  of the War of Independence witness statements which were written 35 years after it happened. I have read one in particular and you would swear that you were reading about Robin Hood. Not alone did the man write about facts, figures, time and place, but mentions specific times of day and night, I think he may have mentioned the make of one of his brother’s bikes.

I sometimes have trouble in trying to recall what I watched on the TV the night before.

Back in the Schoolyard 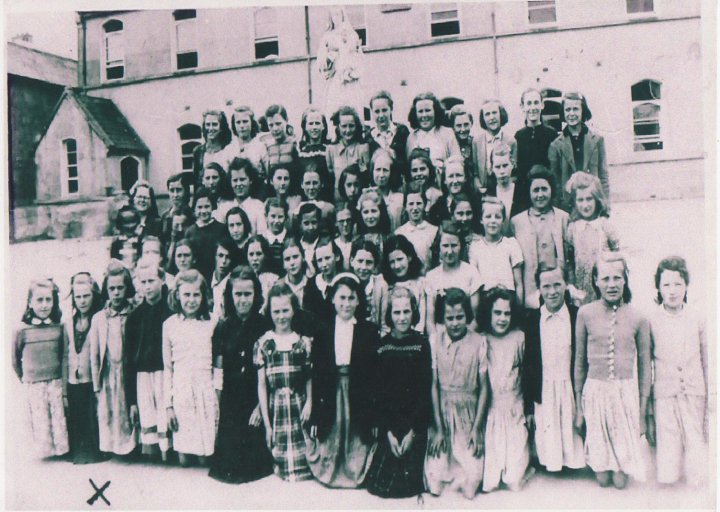 This is Maria Sham’s old photo. These are the names she remembers;

Does anyone else recognize themselves or someone they know? 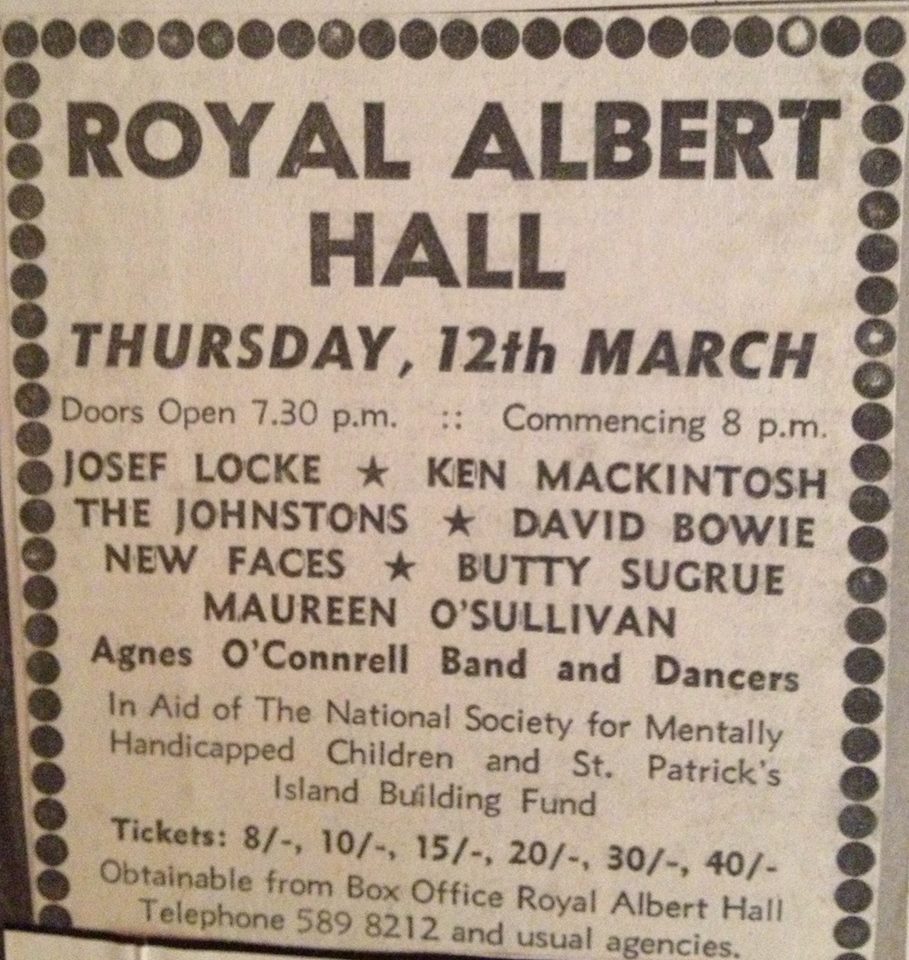 1970. Nobody believes me but it’s true. He was solo on a 12 string and sang Space Oddity to muted disinterested applause. We followed and sang The Curragh Of Kildare and The Traveling People.

John B. Keane and Listowel Emmetts

John B, besides being a great Listowel man was an ultimate Emmetts man. Whenever called on, without question would put his shoulder to the wheel and a lot more as some could testify. Here is a copy of a letter which he drafted in response to a request from Stephen Stack, (Chairman of the Frank Sheehy Park Development Committee) in support of the fundraising. 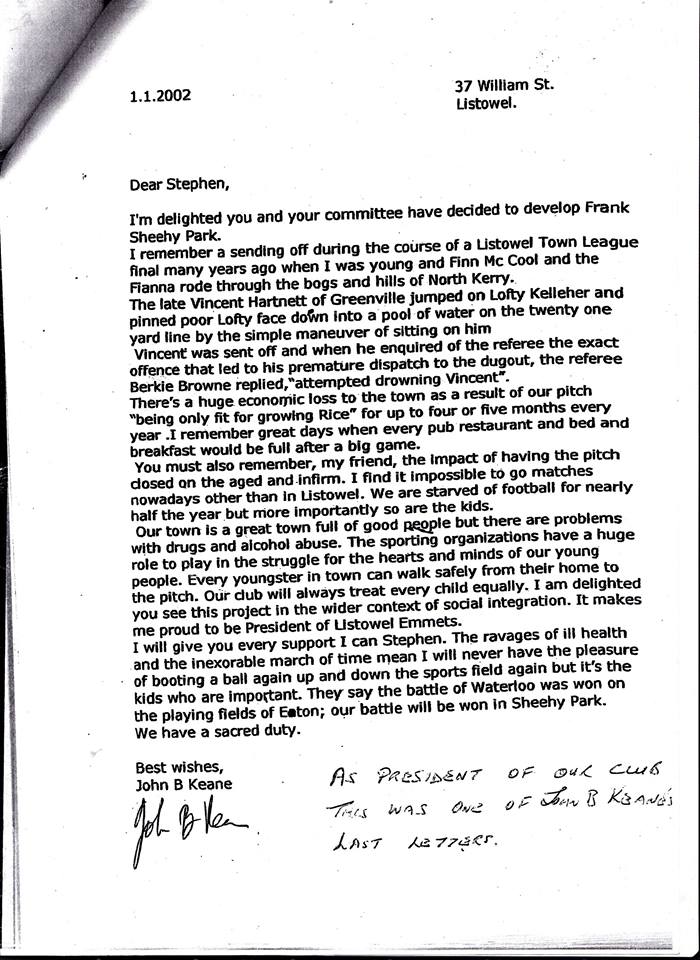 Kieran
Gleeson’s eyes lit up as he explained the background to the film he was
showing, and you could see he was excited – excited about sharing all he knew
with his audience there in his three-screen cinema in a small country town.

There was
always an introduction before his cinema club films on a Thursday night. This
was his night, the night when he got to choose the films he loved. Kieran spoke
as all the knowledgeable do – in simple, easy-to-understand language.

Kieran has been in love with the cinema ever since he stood up
on the piled-high metal boxes that were used for storing magic reels. There, he
was the spellbound kid looking out through the porthole in the projectionist’s
room with his dad and grandad in their country cinema in Cappamore, County
Limerick. Afterwards, he would be full of excitement and full of talk.

Kieran ‘the man’ is still ‘the boy’ in the projection room.
Often, we would be kept on after the crowd had gone home for a discussion about
the movie he was showing. He knew his stuff, did Kieran. There was no showing
off, just teaching and sharing. The soft, gentle but passionate voice, hoarse
from too much talk, is gone for good now.

Kieran’s life is a silent movie. He breathes with the help of a
machine. Our small town hero’s chest rises and falls with every breath. It’s as
if he’s a marathon runner at the end of a gruelling race. Kieran Gleeson – who
rescued, owns and loves our local cinema here in Listowel – has advanced Motor
Neurone Disease.

But he’s still communicating. Kieran writes a little, but only
with great effort. He sends text messages, nods in agreement or moves his eyes
towards something he wants you to read.

Kieran writes ’29’ on a sheet of paper and hands it to his wife,
Teresa. Did you ever notice it when two people feel and read each other’s
thoughts? They seem to instinctively know what the other person is thinking.
The bond has to be strong, but there’s more than just tuning in. The two must
share the dream.

The 29 refers to January 29, 1987 – the day the cinema in
Listowel reopened under Kieran’s management.

The cinema had been closed for two years. Kieran was driving by
one day with his mother and he noticed a ‘For Sale’ sign up over The Astor
Cinema. There and then, he made up his mind to buy the rat-infested wreck. A
local businessman told Kieran he was “absolutely mad” – and maybe he
was. Small town cinemas were going the way of small shops. There are only a few
independent cinemas left in Ireland. The prophesy of failure made Kieran all
the more determined to succeed. He worked day and night and, bit by bit, the
cinema began to pay for itself. His mother helped out every Sunday when the
cinema was at it’s busiest.

Kieran opened three screens and he had the best of films showing
at the same time as the big cities. He was one of the first to embrace
digitalisation and encouraged Jimmy Deenihan, the then Arts Minister, to
provide grant assistance to a number of cinemas.

Hard-up parents were given deals. Kids who didn’t have enough
money were never refused. Kieran often declined the big money-making movies if
he felt they were bad. He never overcharged for tickets, sweets or popcorn.
Director Ger Barrett – who is now about to release his third movie, ‘Brain on
Fire’, later this year – was allowed in for free. Ger premiered his last movie,
‘Glassland’, in Listowel – and the night was turned into a tribute to his
mentor and friend. Actor Jack Reynor came along and Kieran was so buzzed up
that the illness was put into remission for a night. It was like the football
coach who sees the player he trained as a kid step o collect an All-Ireland
medal.

I was only three, but I remember being brought to The Astor for
‘Summer Holiday’ by Bernie Buckley – who was babysitting me then, and still
does. Dad and I cried when Davy Crockett died at the Alamo. It was here I had
the first lip-kiss in the back seat.

Sometimes, when our kids were young, we’d be there at the
pictures and, out of the corner of my eye, I could see Kieran standing in the
aisle at the back, taking it all in. He was enjoying the kids enjoying the
picture show. The light flickered over his smiling face and, if ever there was
man who was happy at work, well, it was him. There and then, and always. After
all, he gave up his studies in accountancy to help run the family cinema in
Cappaghmore when his dad died suddenly from a heart attack.

There have been tough times and, last year, thousands of euro
were stolen from the safe by heartless thieves. Teresa is trying to get to
grips with the details of running a cinema, but she’s learning fast. Best of
all, she and Kieran are determined to keep the cinema going. “Our staff
have been so good to us,” she says.

Kieran had been checking out the possibility of live streaming
concerts and sporting events. He had big plans.

The kids come in from school and Kieran gets a smile out.
Teresa, I know, struggles to come to terms with how it is that such a decent
man suffers so much. She is loyal to him as a full-time carer on a break from
her job in the civil service, and loyal to his vision for the family-run
cinema. Such is the practicality of true love and mutual respect.

Teresa sent me a link to a Radio Kerry interview with John
Herlihy, where Kieran speaks of his love of the sounds of the old cinema
projection room with the 35mm reels. “We treasure that now,” she
says. “It’s all we have of his voice.”

He shuffles in his wheelchair to attract my attention. He shows
me the screen on his phone. This week, Kieran is showing ‘The Revenant’ and
‘Creed’, as well as kids’ movies. Still promoting his cinema as he fights for
every movement. There is such a powerful, undefeated will within him. As I
leave, I kiss my friend gently on the head and thank him for all he has done
for all of us.

Kieran is a lovely kind man. His screen 3 is the only one which is wheelchair accessible. Kieran offered to show any film which normally was showing in One or Two  in Screen 3 on a Monday night, just to suit Jim Cogan. All we had to do was ask.

It was an offer we never took him up on but we greatly appreciated the kind gesture.