The Coleman who executed these marvelous windows has a Knockanure grandmother. Jer Kennelly brought us this story.

In 2011 a dream became a reality with the installation of two specially commissioned stained glass windows in St Patrick’s Church, Lahardane. The windows were the inspiration of the Addergoole Titanic Society, as part of the preparation to commemorate the centenary of the sinking of RMS Titanic with the Mayo Titanic Cultural Week 8th – 15th April 2012. Fourteen people boarded Titanic from the locality in April 1912, eleven perished.

Designed by local artist Michael Coleman of Whitethorn Studios, the task of constructing the windows went to Art Glass in Derry, who also has the commission to create the stained glass dome ceiling in the re-created ballroom of the new signature building in Belfast’s Titanic Quarter.

The two stained glass windows, one entitled ‘Emigration’ and the other ‘The Titanic Rescue’, required research with an eye for detail, as well as respect for those who perished and those who survived.

Fortunately, present day descendants of the Addergoole Fourteen have kept this story committed to memory and the windows are a memorial to their ancestors. The windows are appropriately placed either side of the existing marble memorial plaque, which was placed in St Patrick’s Church in 2002, to honour the memory of the fourteen emigrants who sailed on RMS Titanic in 1912.

The Titanic Window, depicting Boat 16 being lowered, is based on what Addergoole survivor, Annie Kate Kelly, who became Sister Patrick Joseph, an Adrian Dominican Sister in Michigan USA, remembered. Annie was standing in line waiting to enter Boat 16. A man accompanying two woman was refused entry. One woman said: “I’ll not leave my husband”, and the other “I’ll not leave my brother”. They were Catherine and Mary Bourke from Addergoole. Annie, next in line, was given a place. As the lifeboat was lowered she looked up and saw her cousin, Pat Canavan, and the others including James Flynn. As the window depicts, Pat was holding his rosary beads and waving.

The lifeboat’s capacity was 65, but it was not full. Eleven other passengers who also boarded at Queenstown were saved in this boat, which was lowered at about 1.20am. Eight were from County Longford and three from County Galway. A Galway survivor, Ellie Mockler from Caltra, also became a nun with the Sisters of Mercy.

The Titanic Window is likely to be one of the very few church windows, worldwide, dedicated to Titanic victims. Equally the Society is not aware of any church window in the country dedicated to Emigration. Significantly, these windows stand alongside the ‘Harry Clark’ classic church window of the Madonna and Child, a triumphant trio of church craftsmanship for all to see in St Patrick’s Church, Lahardane.

American descendants of the three survivors generously donated the cost of the Titanic Window. Then Society members, Bridie Syron and David Donoghue, descendants of ‘The Addergoole Fourteen’, secured funding for the Emigration Window from other descendants in America and the UK of those lost. Donations were also received from other local descendants and from people with an interest in the Addergoole Titanic story.

The official dedication and blessing of both windows takes place on Sunday 15th April, as part of the Cultural Week, 8th to 15th April 2012 and will be a lasting legacy to the memory of all Lahardane emigrants. 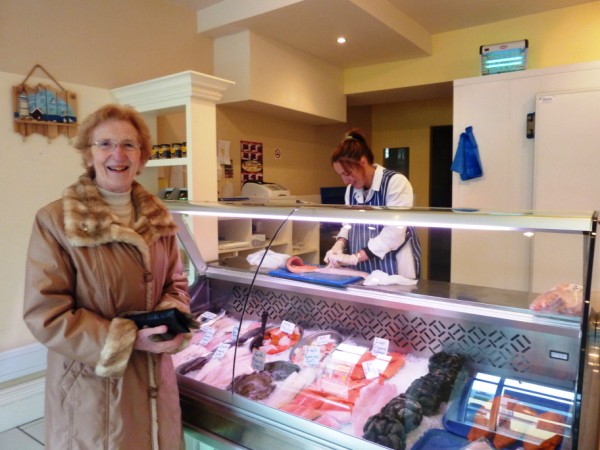 Last week I met Mrs. McAulliffe in Catch of the Day as she was buying some fish.

Time was when we all bought our fish in MacAulliffe’s. Mrs MacAulliffe remembers when mackerel was one shilling. In those days there used to be a long queue outside her shop every Thursday and Friday. I remember queues down the street as far as Scully’s Corner on Holy Thursdays. 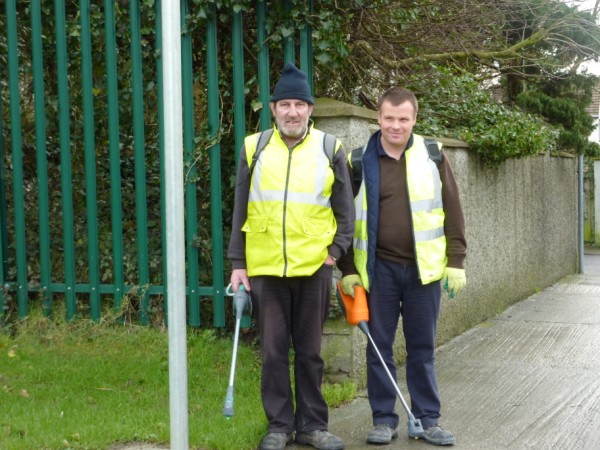 On my way home from town I met these two boys spraying the weeds and keeping Listowel looking beautiful.

NKRO’s festival date is confirmed for the week beginning August 3 2012. The week’s events will run until August 10. If you want help in locating ancestors or  relatives prior to your visit, please contact

Committee members, remember tonight’s meeting in The Seanchaí at 8.00 p.m.