This TV critic wasn’t afraid to tell it like it is… I think she was a Listowel viewer.

What’s My Line is not having very auspicious beginnings on R.T.E. The
formula is old, tried and true and more than likely it’s currently
doing the rounds of world television stations. The two men who devised
and copywrited the idea have probably  made a small fortune out of it.
All that has been proven, however, is that the formula can be a
success but, to bring it to life, it needs a panel brimming with
contrasting personalities and a chairman to match.

What we’ve got is a
chairman, Larry Gogan, who rushes the programme though like a man
trying to finish a pint in a minute to closing time; a  panel which
for the most part is  trying so hard to be bright that, it’s painful;
and competitors with such way out occupations that one would have to
be a mind-reader to even get started on them. If everyone calmed

down, and stopped trying so hard, the programme might get off the
ground.

By the way I’ve only just discovered, that viewers in Listowel
who use a Cork aerial, are blessed with a second, channel which is not
of their own choosing. This is caused, by the radio-telephone which
operates, between, the hospital and the ambulance. It, comes over loud
and clear on these sets and is so powerful that it actually cuts out
the programme completely. Not alone is the ambulance driver alerted
but the curate who is on duty in the presbytery also gets timely
warning of a possible sick-call. Nobody I have asked seemed to be able
to explain away this extraordinary happening but, happen it.
does.—I’ve seen, and heard it! 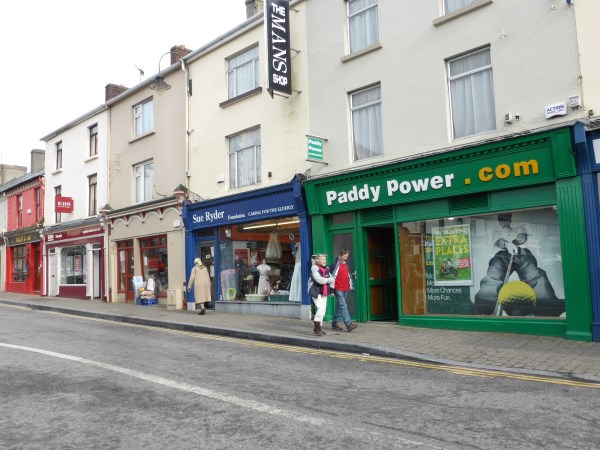 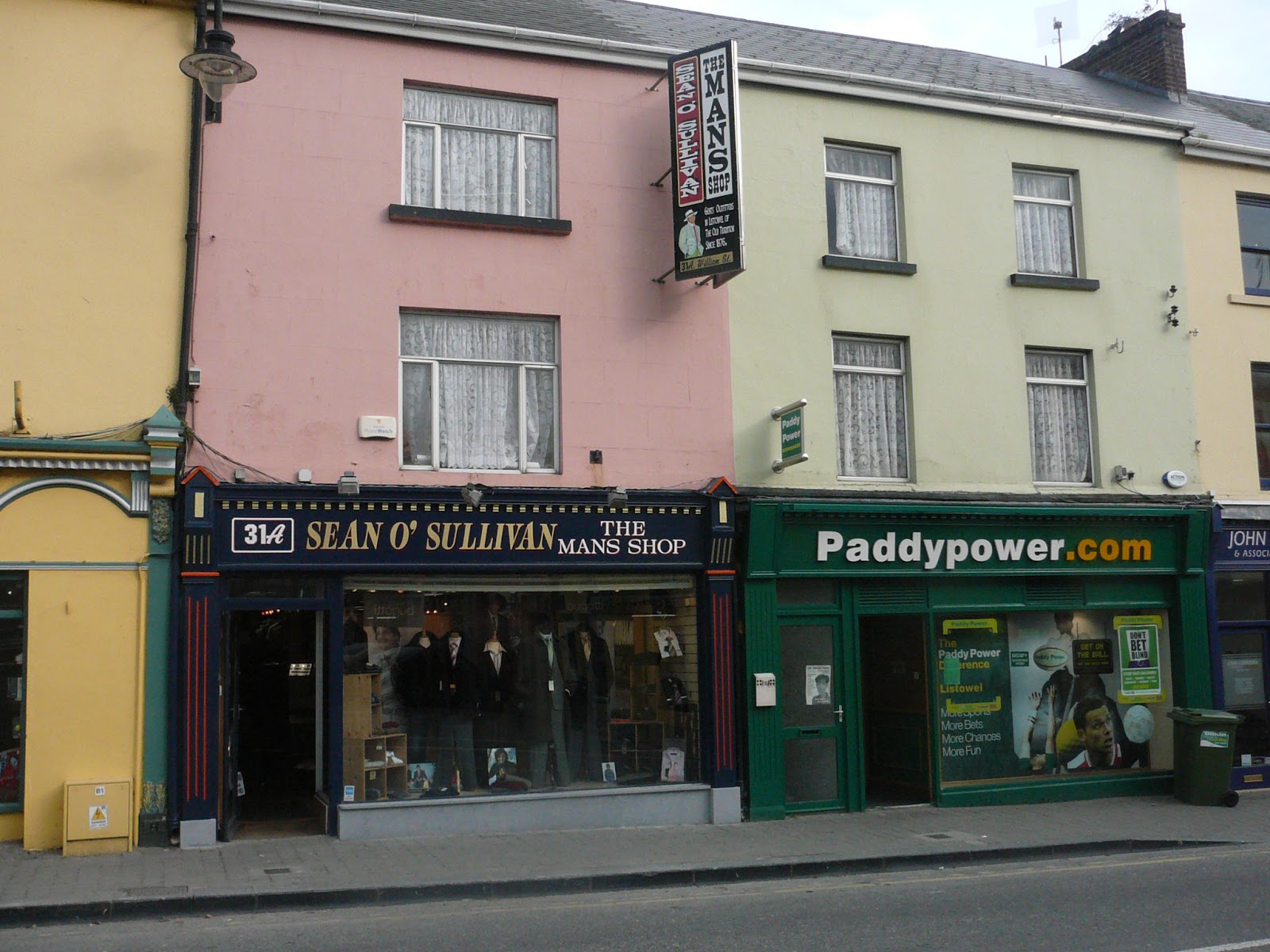 Art at The Red Door

Listowel was well represented among the artists and attendees at the Red Door Gallery in Newcastlewest on Thursday March 3 2016. 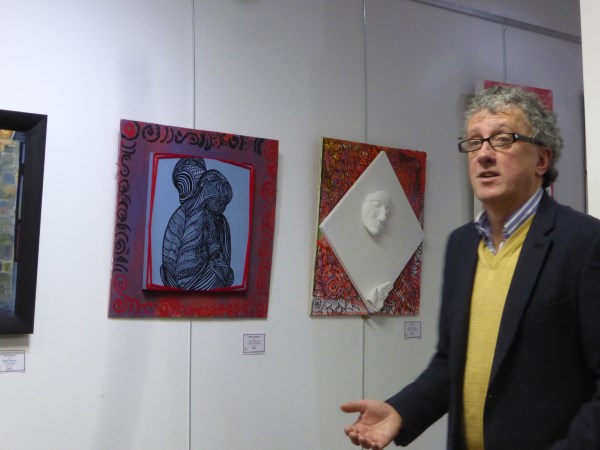 Billy Keane performed the official opening of Colourful Spirits’  Show and he took us on an impromptu tour of the pictures and sculptures. 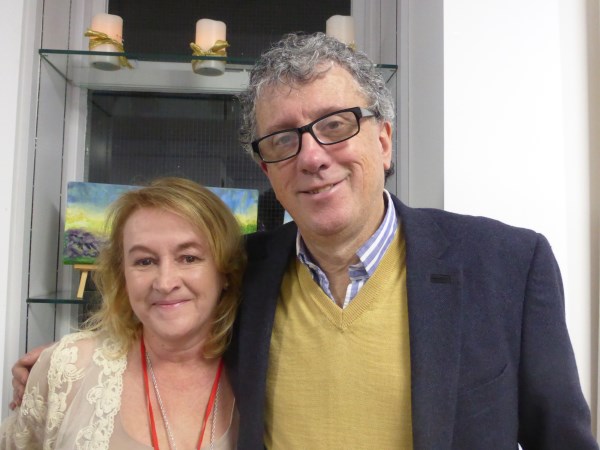 Billy posed for me with his very artistic former William Street neighbour, Rebecca O’Carroll. He reminded those present that it was Rebecca’s father who produced the first and best stage performance of Sive. 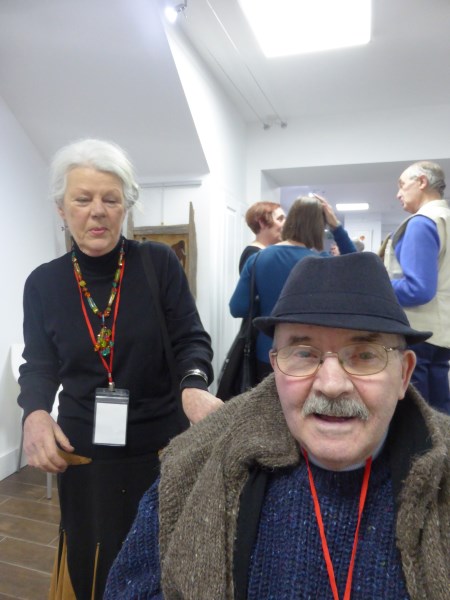 Liam Brennan, formerly of Listowel and his wife, Maura had some of their artwork on display. 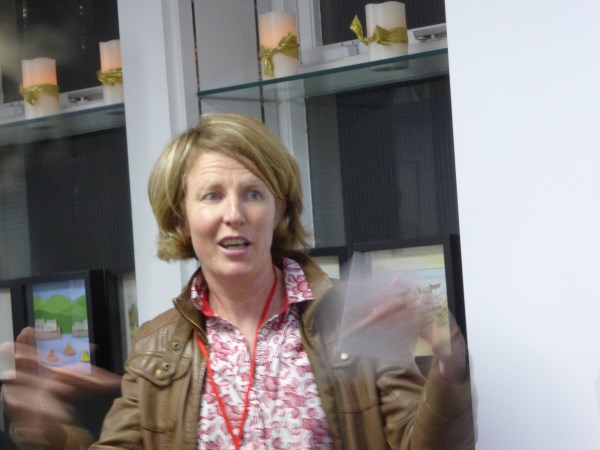 Lisa Fingleton is not from Listowel but she spends a lot of her time here so we can claim her as our own. 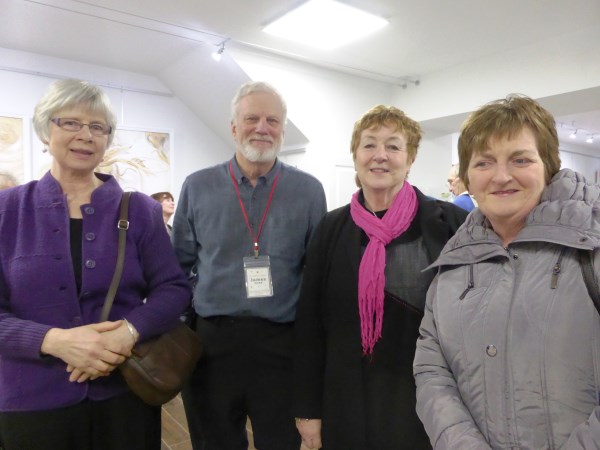 Jim Dunn is the man among the ladies here. Jim’s artwork will be familiar to followers of this blog as he is the artist responsible for Athea’s  much admired murals. He is not from Listowel either but he is chair of the Art committee of Listowel Writers’ Week so that makes him an honorary Listowel man.

On the far left is Maggie Donald of Duagh whose ceramics are selling like hot cakes in Craftshop na Méar.

Next to Jim is his wife, Elizabeth Dunn, chair of Listowel Writers’ Week and, on the right, is my good friend, Helen Moylan of Listowel.

Goodbye to The Tinteán

The magnificent Tinteán theatre in Ballybunion is closing at the end of the month and the furnishing and fittings are to be sold off. 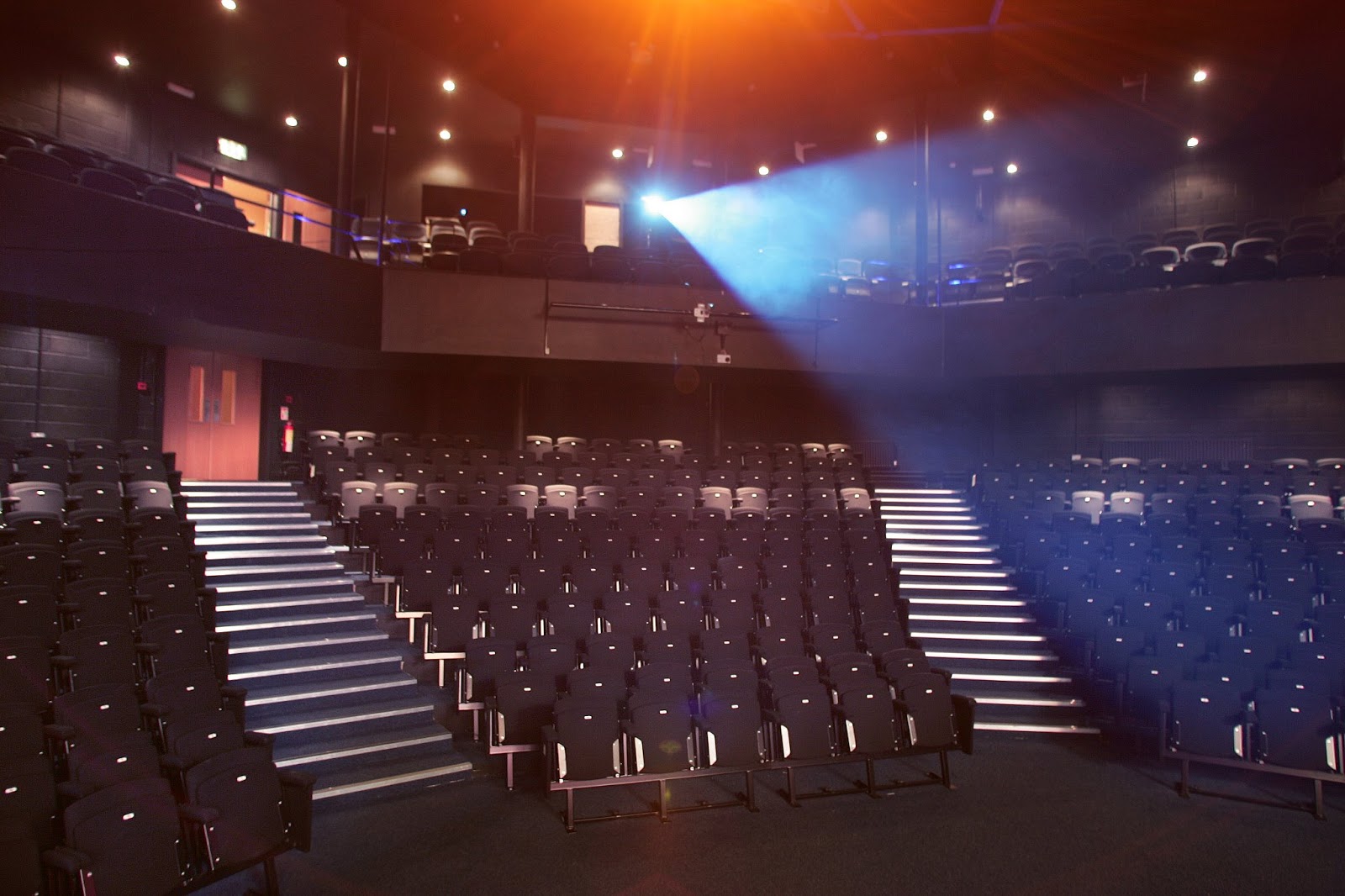 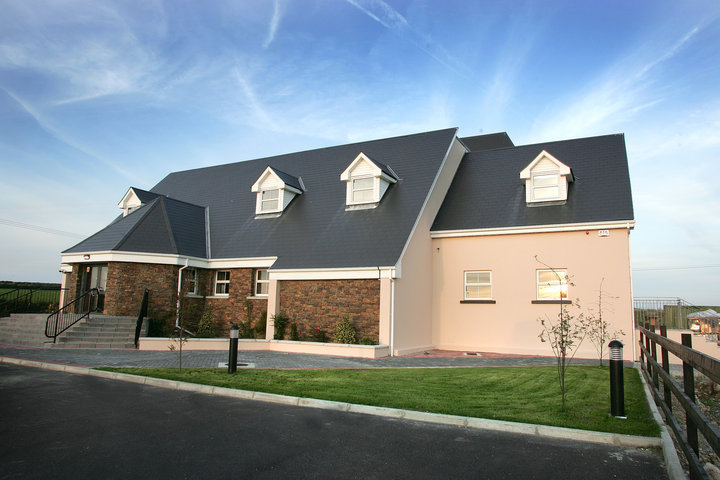 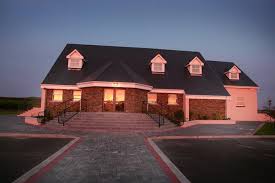 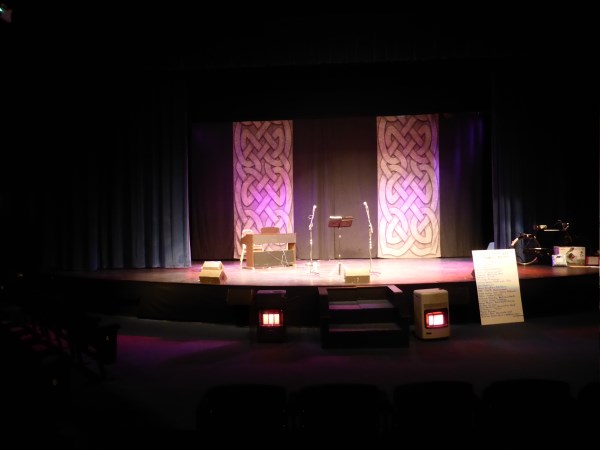 This was the stage on Friday evening last, March 4 2016 as we gathered for a fundraising concert for Lisselton School. The concert was organized by Claire Keane Fennell, a past pupil of the school and she was joined on the night by past pupils Bryan Carr, Anna Connolly and the Foley Family. Her friends from John B.s, Mickey MacConnell and Paddy MacElligott also did a turn and Billy Keane was the very entertaining M.C. 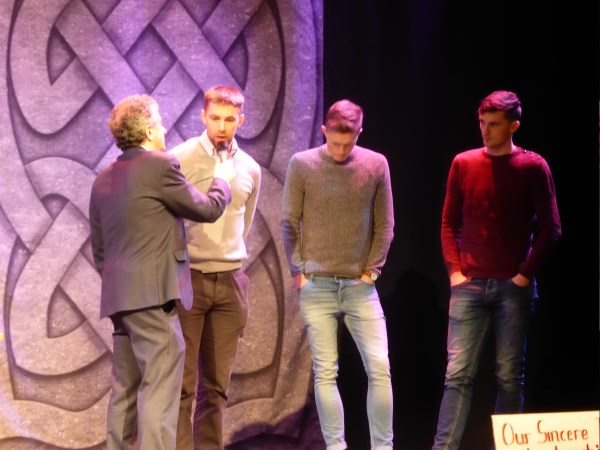 Marc OSé made a special guest appearance and there was much banter about local star, Jason Foley taking his place on the Kerry team, a move that appeared to be popular with the local audience. 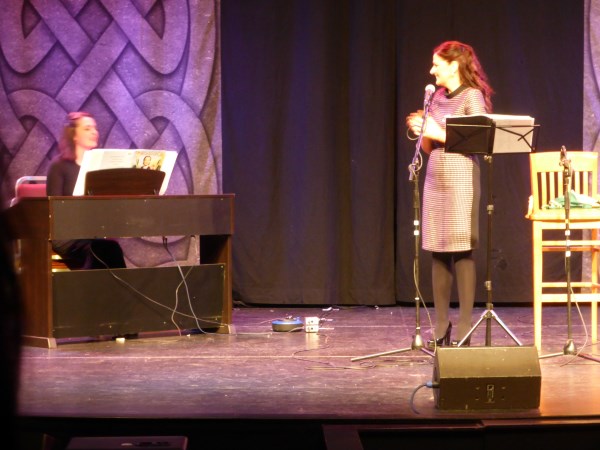 Claire and Anna on stage 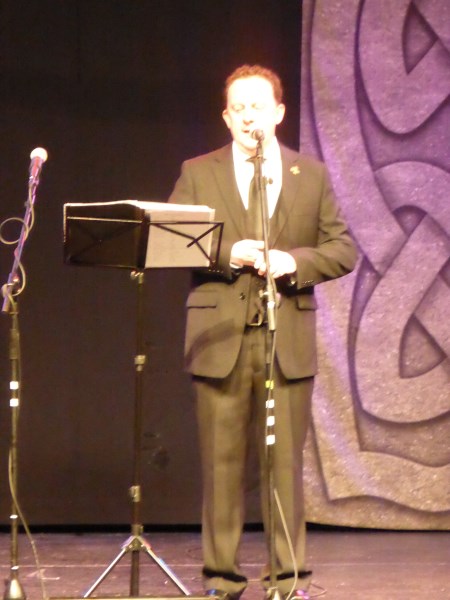 At the launch of Maurice O’Mahony’s book on the history of Coolard National School, Joe Murphy, past pupil of Coolard and administrator of St. Johns for the past 26 years, relived for us some of his memories of his education there and in St. Michael’s, Listowel 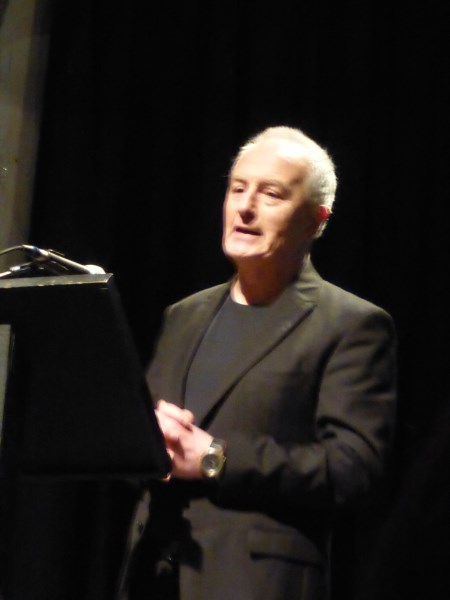 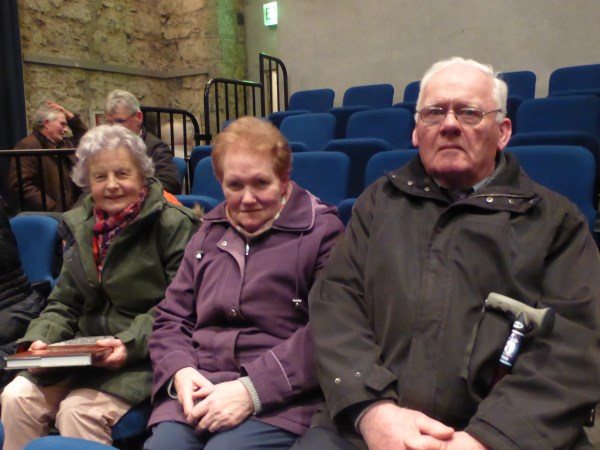 Cáit Baker, his former teacher, was in the audience with her husband Tomás and her friend, Sr. Margaret  to hear Joe tell us of her valiant efforts to teach him to sing “Kelly the Boy from Killane” despite his being a préachán.

Joe remembered the days bringing in the turf to the school and the hours spent ‘weeding the grotto”. This, he told us was a task you could stretch to a whole afternoon by the simple ruse of taking the handful of weeds across the road to the glasha and bringing them back again rather than throwing them in.

Only one other pupil from Coolard went on to St. Michael’s with Joe and he described the secondary school in the 1960s as a very intimidating place for a country boy. When the results of the Christmas test were posted he gained in confidence as he saw that he was smarter than many of the townies who were so vocal in class.

Joe, like me and many more who were present on the night of the book launch, did his Primary Cert in Irish, English, Arithmetic and Mental Arithmetic. I was transported back to my old classroom in Kanturk and the daily mental arithmetic tests.

To much laughter, Joe reminisced about the man who went to town and spent half his money in one shop, a quarter of what he had left in another and he came home with 1/6. The question was how much did he have leaving home.

It was no laughing matter back then!

Four generations of the Murphy family have attended Coolard National School. Joe remembered the numbers and makes of the teachers’ cars and he remembered the makes of all the various tractors he could see through the school window. Happy days!