WW1 remembered, some Lithuanian cooking and a Few Photos from Young Adult Bookfest 2018 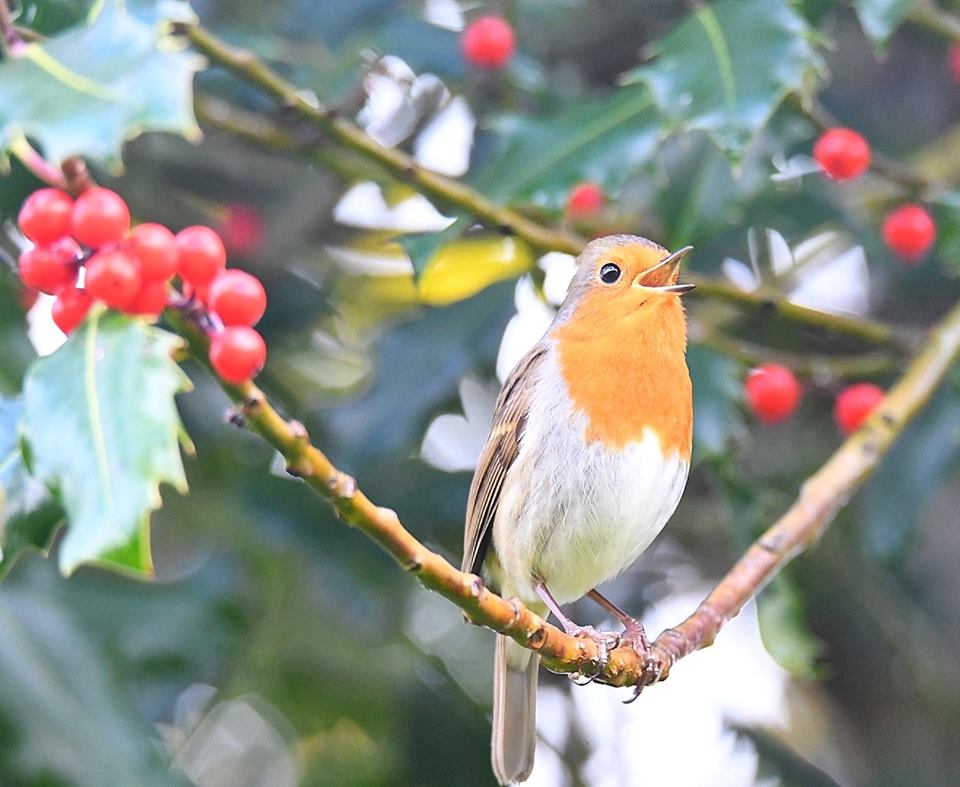 Then in the lull of midnight, gentle arms
Lifted him slowly down the slopes of death,
Lest he should hear again the mad alarms
Of battle, dying moans, & painful breath.

And where the earth was soft for flowers, we made
A grave for him that he might better rest. 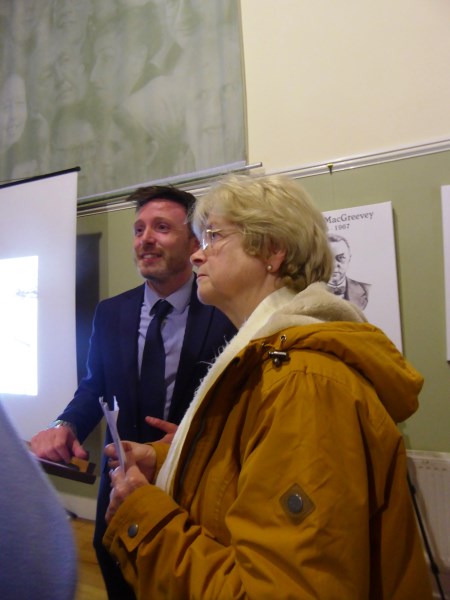 On Sunday November 11 2018, Tom Dillon, war historian, gave an excellent illustrated lecture on Kerry and the Great war. He concentrated on the local men who fought.

Tom is extremely knowledgeable about all aspects of the war and he imparts his knowledge in an accessible and entertaining way. He told us stories which brought the men to life and he enlivened his account with little anecdotes that kept his audience hanging on his every word.

He told us about Armistice commemorations that went on in Kerry until the 1960s. He told us of an act of neighbourliness that saved a man’s life amid the carnage in Messines. Another story concerned a Kerry soldier who saved a German officer’s life with a blood donation.  We learned about two brothers who died within 24 hours of each other . This meant that a Kerry mother received the dreaded telegram on two consecutive days. A Clieveragh family sent seven sons to the front and miraculously all seven returned. The family attributed this miracle to their mother’s prayers.

Tom showed us photos and pictures of Fr. Gleeson blessing the troops and saying mass for them. Tom showed us how the German trenches differed from the Allied ones. The German ones were superior. But when it came to the war graves the Allies took the prize. We are all familiar with the War graveyards with the rows and rows of uniform gravestones only differing in the inscription the families were allowed to add at their own expense. Tom showed us a poignant one of these inscriptions, “If love could have saved him, he would have lived.”

The German authorities buried their dead in mass graves. One such grave holds the remains of as many as 25,000 soldiers.

The lecture shone a light on “the world’s worst wound”. where everyone was an unknown soldier. It was enlightening to listen to Tom make them known.

The lecture was accompanied by memorabilia lent by Kerry Library and local families, including  the Hennessy medal which has only recently been unearthed (literally) in Lixnaw. 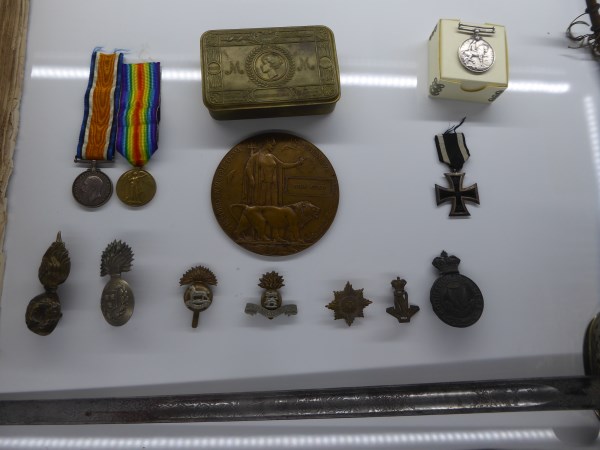 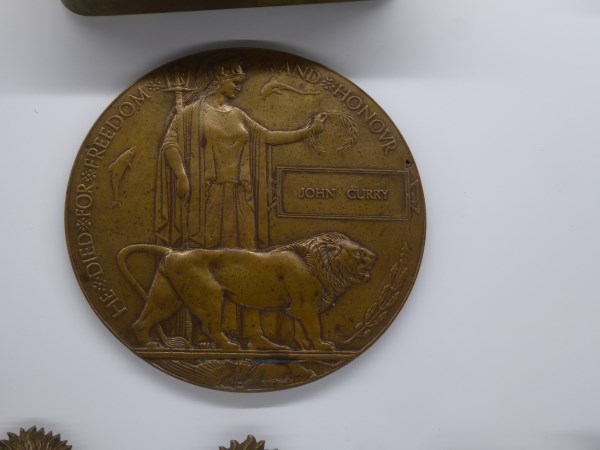 This is the Death Penny that was issued to the next of kin of everyone who died as a consequence of war. These plaques which were much bigger than a penny were issued right up to the 1950s to the surviving relatives of men and women who died as a result of war. They had the name of the dead soldier but no rank. It was believed that everyone was equal before God. It was the same thinking that led the war graves people to decree that every soldier’s grave, regardless of his rank would be exactly the same. There is a great sadness in this sameness. It makes them into an army again, robbing them of individuality and keeping them from their families, even in death. 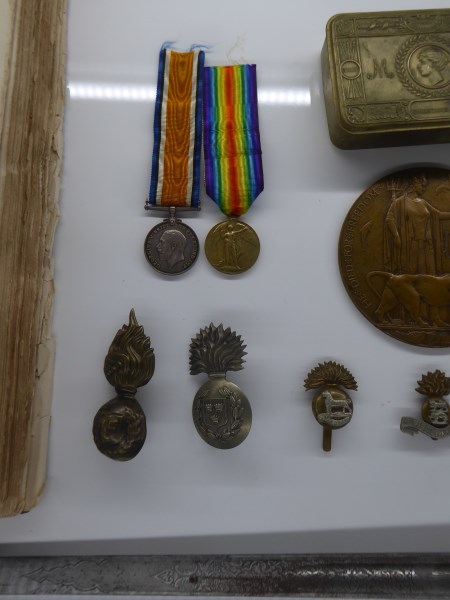 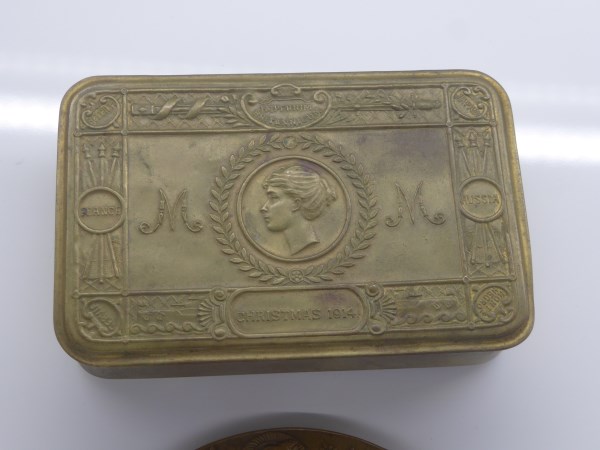 This is a Princess Mary Christmas box. In 1914 every soldier and sailor got one of these. They were paid for by donations from the British public.

The funding was used to manufacture small boxes made of silver for officers and brass for all others.[4] Each was decorated with an image of Mary and other military and imperial symbols and typically filled with an ounce of tobacco, a packet of cigarettes in a yellow monogrammed wrapper, a cigarette lighter, and a Christmas card and photograph from Princess Mary.[6] Some contained sweets, chocolates,[7] and lemon drops. (Wikipedia)

It is estimated the 2.5 million of these boxes were distributed. 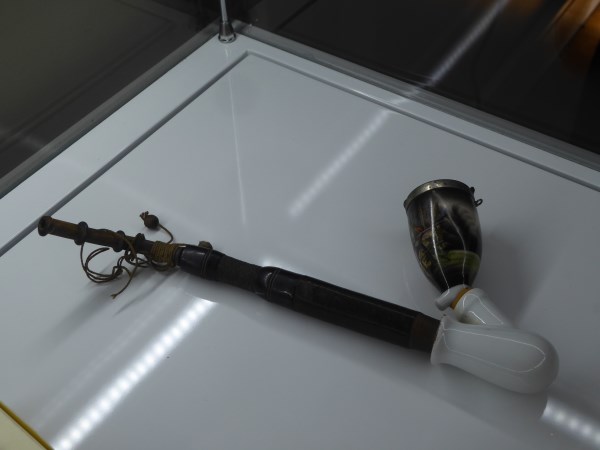 Remember the story about the German officer who had a rare blood group and whose life was saved by a blood donation from a Kerry soldier. He gave him his pipe as a reward. 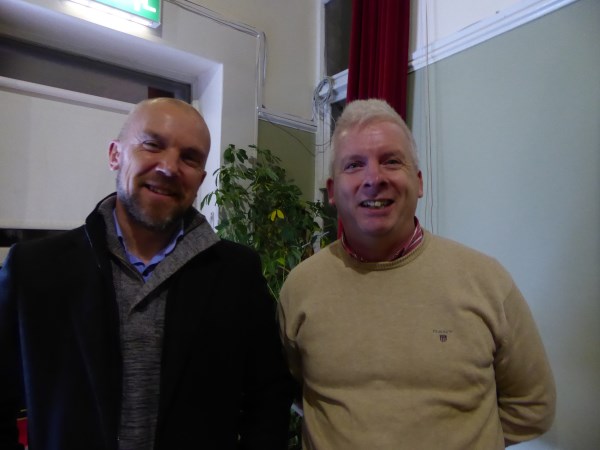 Brian and Martin were among the attendees at the talk. 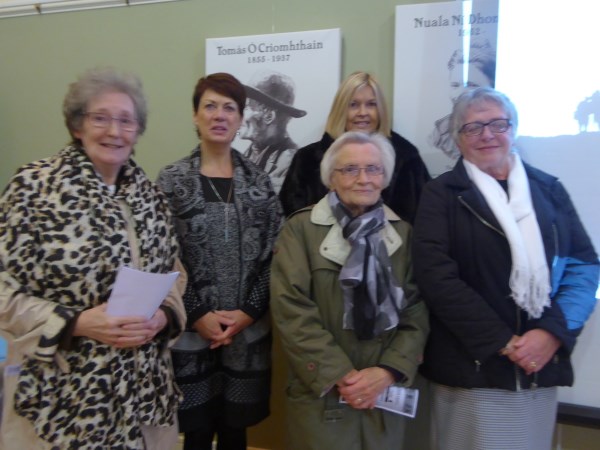 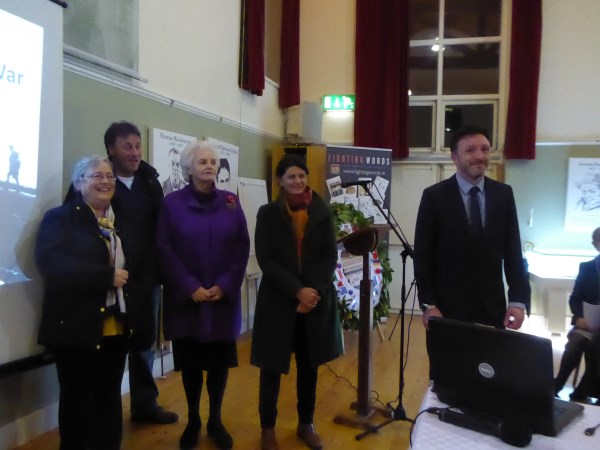 These people are relatives of the men who fought. They helped Tom with his research and were there to hear the stories on November 11 2018, one hundred years after the ending of the war.

I started the day with brunch in Café Hanna and then it was off to Scribes where Brigitta was giving an excellent demonstration of Lithuanian cuisine. 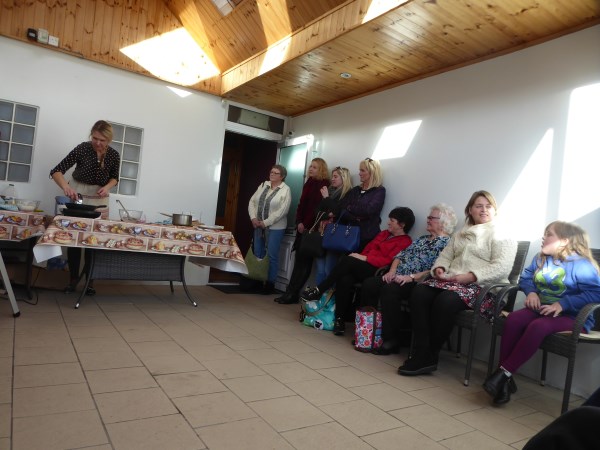 A good crowd had gathered in Scribes to see Brigitta’s first ever cookery demonstration. She aced it. Considering that English is not her first language and she was dealing with a subject which she always thinks about in her native language she did a brilliant job. 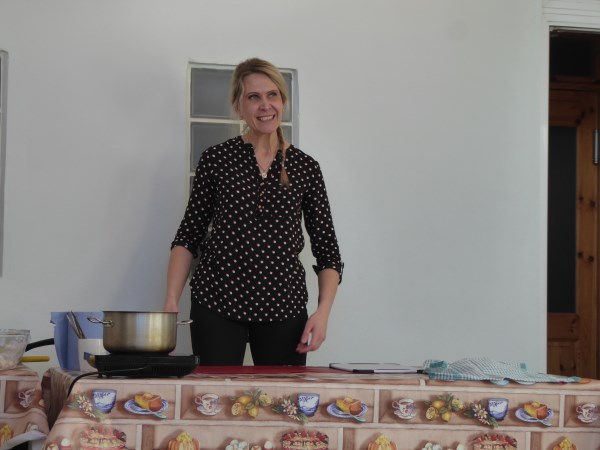 Brigitta showed us how to make cheese an easy peasy way and she made some dishes using the cheese. I loved the mixed veg salad she made . All of the dishes were very dairy rich and pork is very popular as the meat ingredient in Lithuanian cooking. 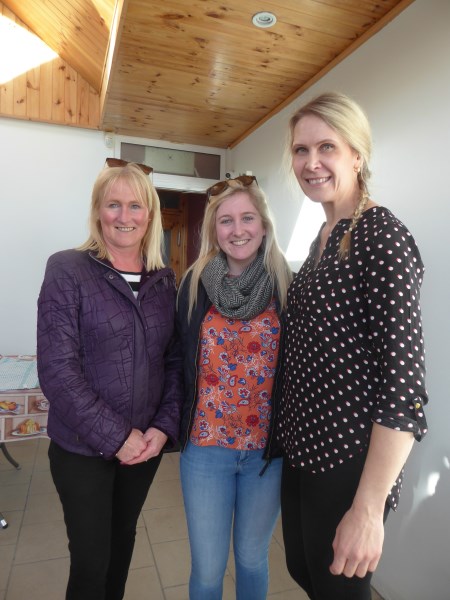 She had lots of support from family and friends. 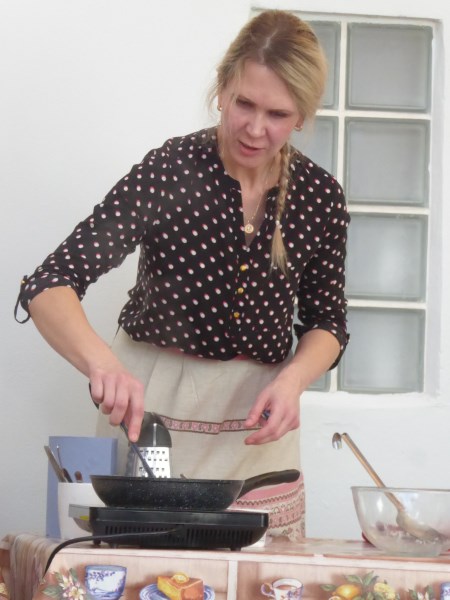 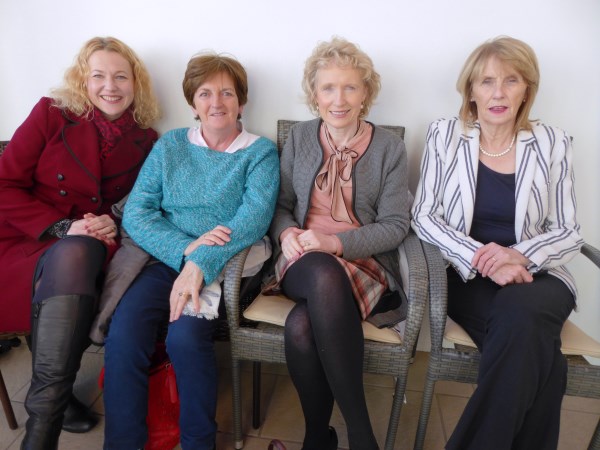 Some local ladies enjoying the demo. 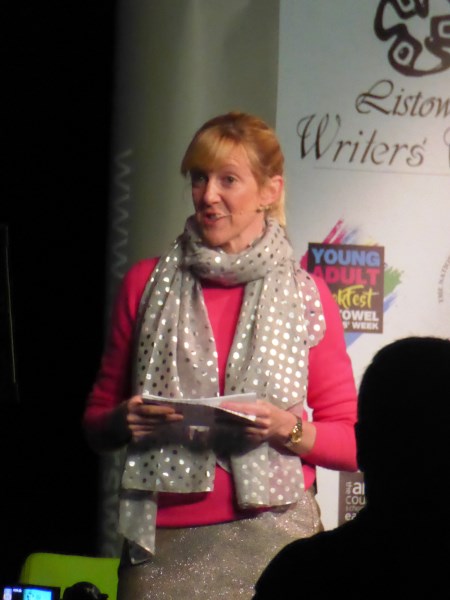 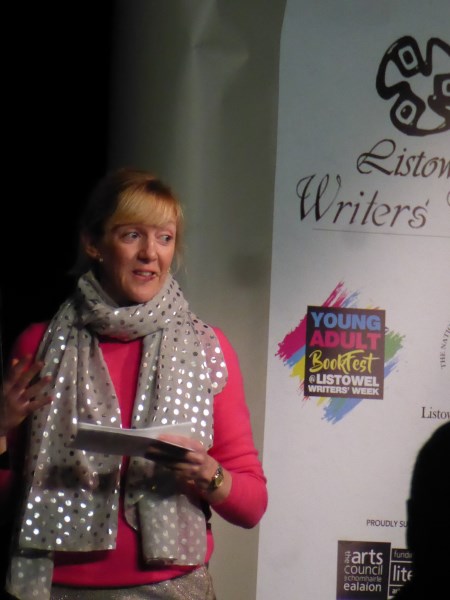 Catherine Moylan is the new chair of Listowel Writers’ Week. This was her first big gig. She did the meeting and greeting and warming up the audience like a pro. She echoed what we were all feeling when she said she wished there had been days like this when she was a pupil at Pres. Listowel 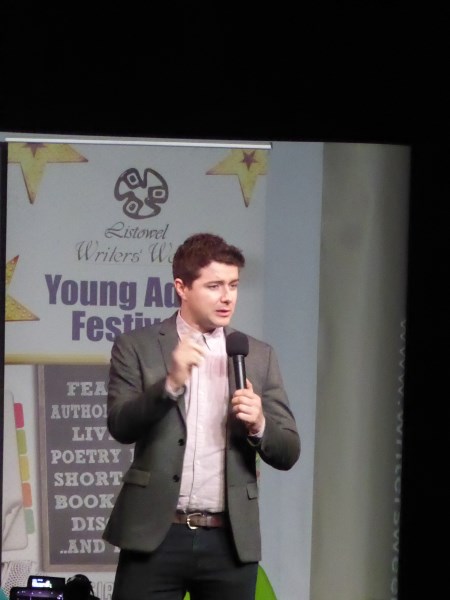 Bernard Casey is very successful comedian. The young people loved him. He made several appearances during the day and got a rousing cheer every time. 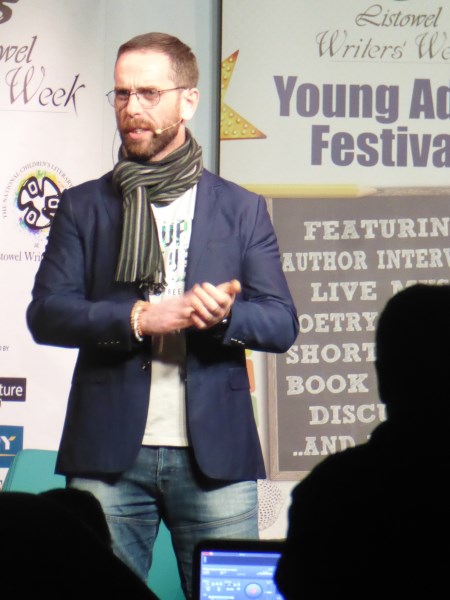 Gary Cunningham loves Listowel and Listowel loves him. All he has to do is tell his life story  and he has audiences eating out of him hand. 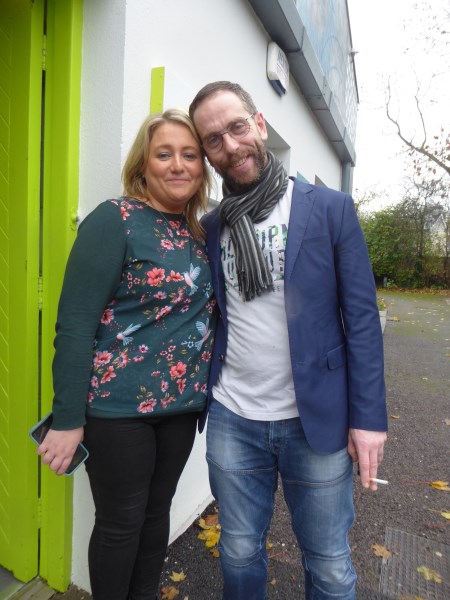 Gary gained many new fans among the pupils and the teachers. 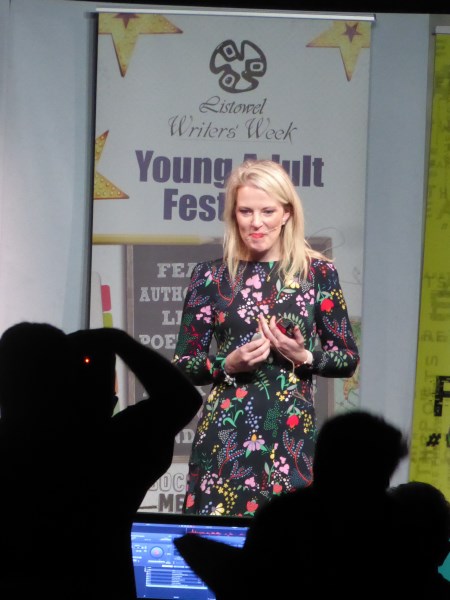 Sarah Crossan is Laureate na nÓg. She involved the audience in her show with poetry and rapping blending in and out of one another. Sarah is a great believer that poetry is a performance art. 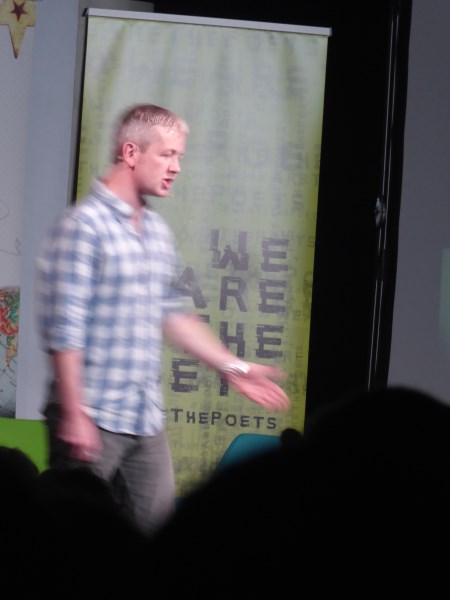 The other poet who is part of Sarah’s travelling show is Colm Keegan. as well as performing they met with a focus group of local young people. 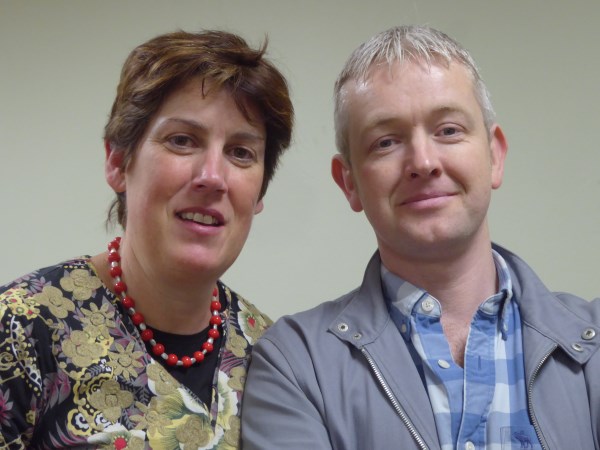 Máire Logue took a quick minute to pose for me with Colm. The great success of the day is due in no small part to the organisational abilities of this extraordinary lady.

A Legend with a very proud Listowel Connection 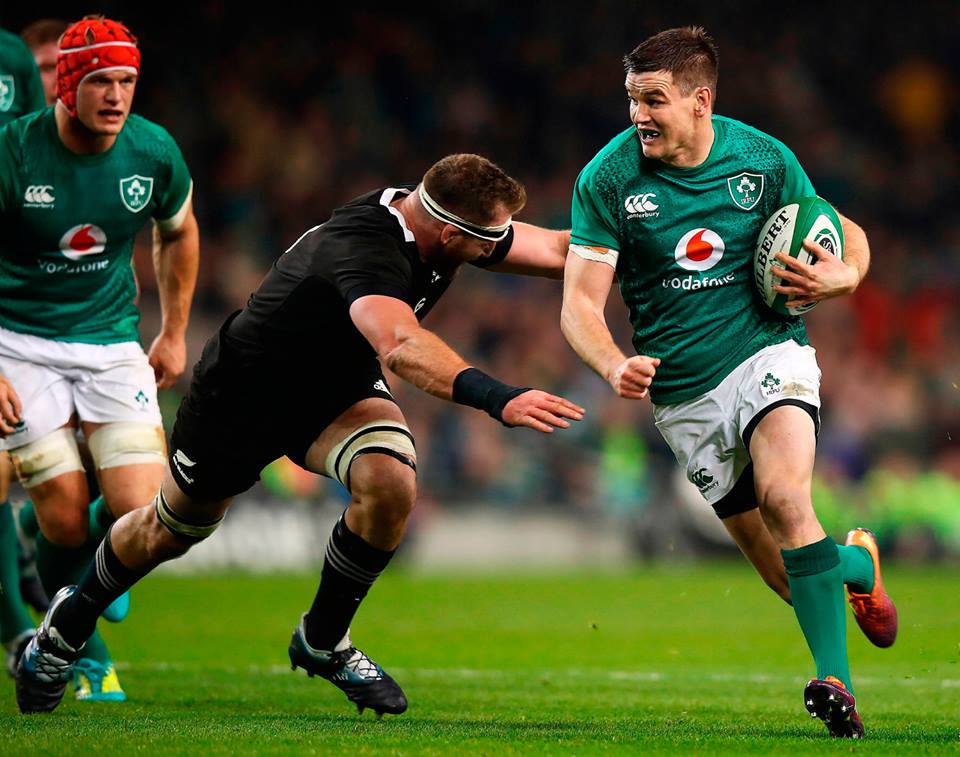 Johnny Sexton helped Ireland to win against The All Blacks in the Aviva in Dublin on Saturday, November 17 2018. This is the first time EVER that an Irish rugby team beat the New Zealand team in Ireland in front of an adoring home crowd.